Today for review, we have the Voopoo Vinci 2 and Vinci X2 which were kindly provided to me by TECC. What follows is my experience with the device and are all my own thoughts.

The original Vinci was a very popular device and is still used by many vapers today. They are of course named after the genius Leonardo Da Vinci who is famed for his many works of art and inventions but mainly he gave us the name of a Teenage Mutant Ninja Turtle. So what do the Vinci 2 & X2 offer in terms of upgrades? What does the man they were named after think? 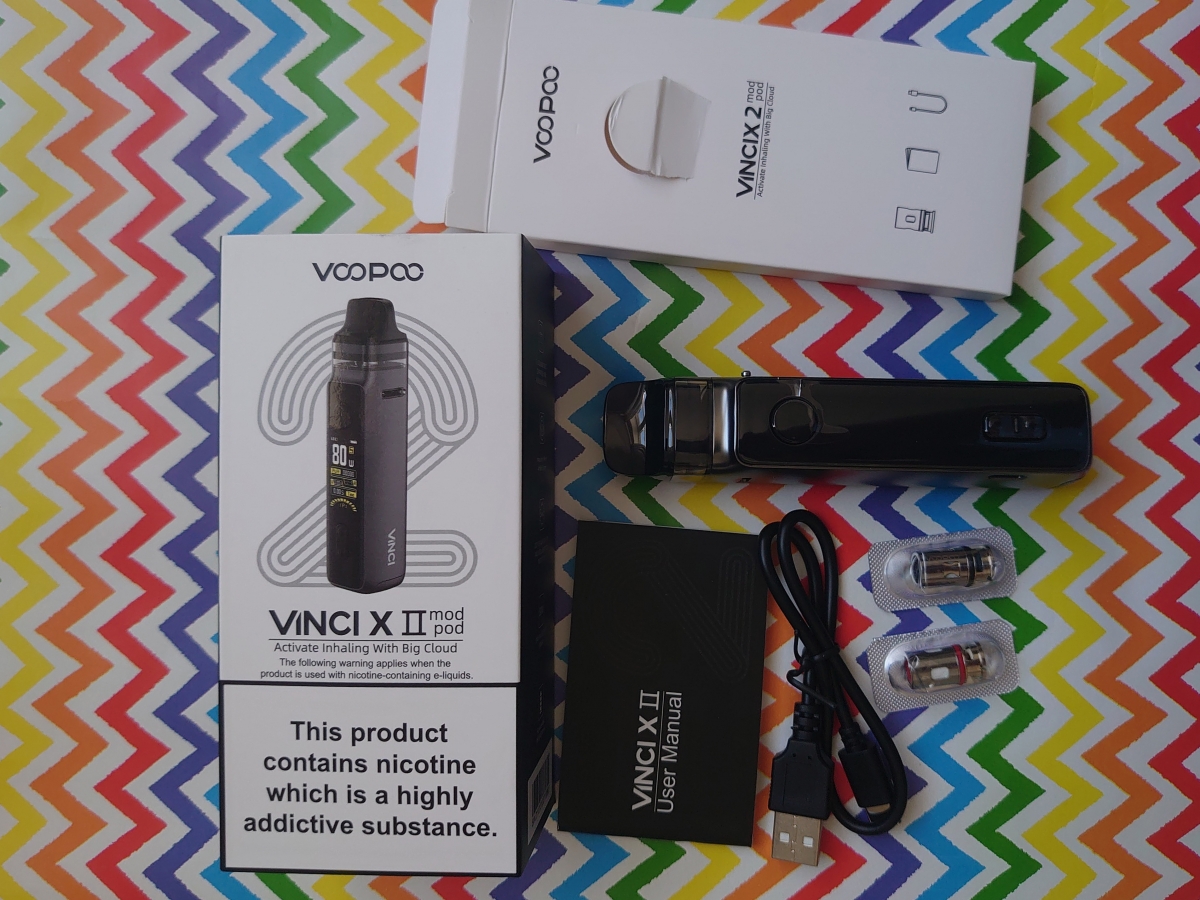 In the box you get:

For a full rundown of the specs please click here, but the main differences between the 2 and the X2 are that the 2 has a 1500mAh internal battery and has a max wattage of 50W, whereas the X2 uses a removable 18650 battery and has a max wattage of 80W. The X2 is slightly bigger but doesn’t have the auto-draw that the 2 does. Both use the same pod which can take all of the PnP range of coils and can hold 6.5ml of liquid (2ml TPD). 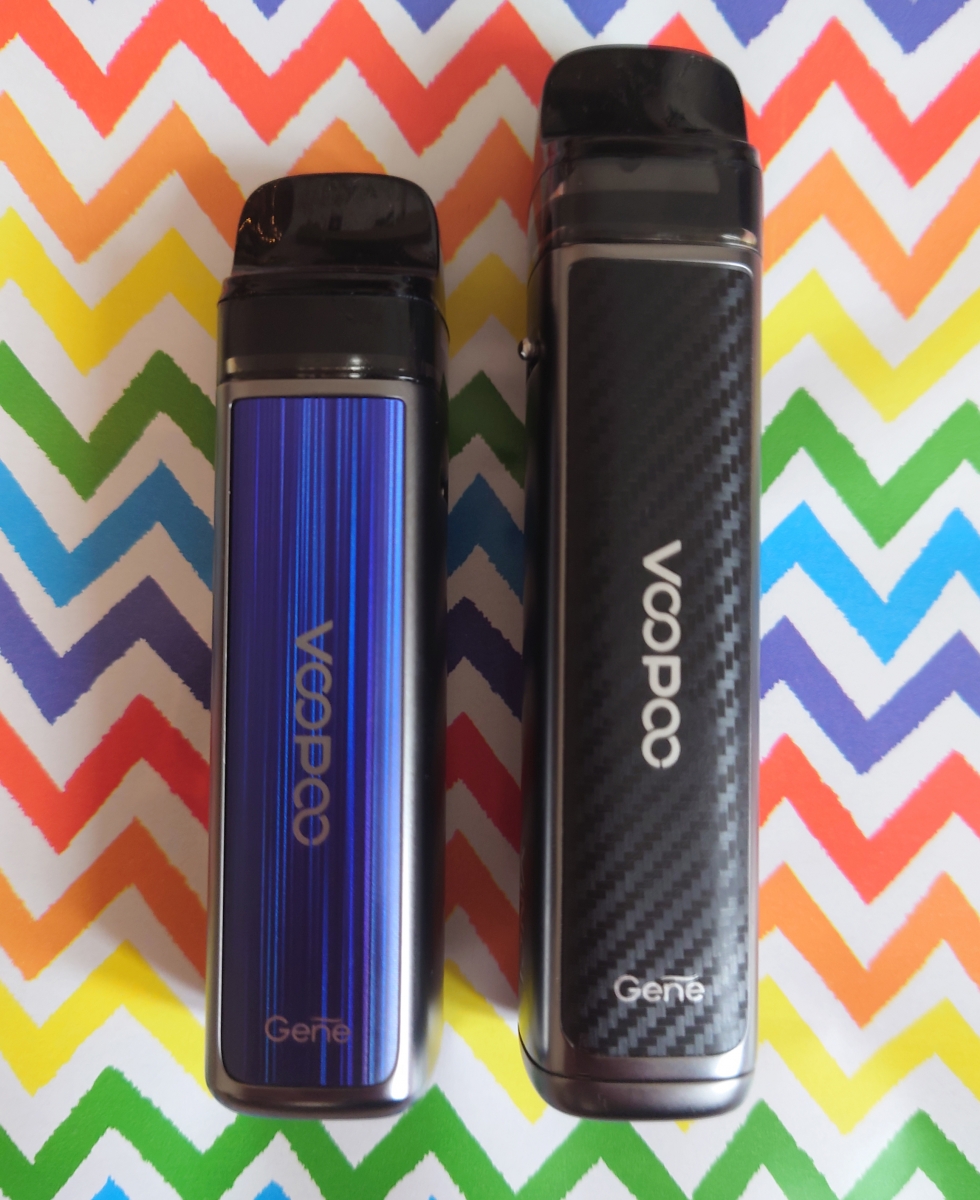 “The noblest pleasure is the joy of understanding” – Leonardo Da Vinci

The body of the device is made of a zinc alloy which makes it light but sturdy, and it’s square shape with rounded edges makes it really nice to hold. It’s solid and really well built but the coating on the sides (not the coloured panel) scratches quite easily. The buttons are all nice and clicky and responsive (on the 2 the -/+ buttons are horizontal but on the X2 are vertical), and the airflow slider has a nice weight to it. The airflow control slider nubbin/knob/doodahwop sticks out quite a bit though, this make it easy to use but it does ruin the aesthetic somewhat and can be a pain when taking the device out and about as it gets caught in your pocket and you find yourself looking down saying “stupid little knob” which won’t increase your chances of getting laid at all! The airflow itself does work really well though giving you a full range of options from wide open to really quite tight for DL, it’s not going to give you a true tight MTL experience though, only ever a loose MTL, which is a shame.

The bottom of the device has a rubber ring on it which is a small but very welcome thing as makes putting the device down nice and smooth ensuring it less likely to fall over or slide off whilst providing protection from scratches to the device and the surface you rest it on. It is something so simple yet so effective, like me. 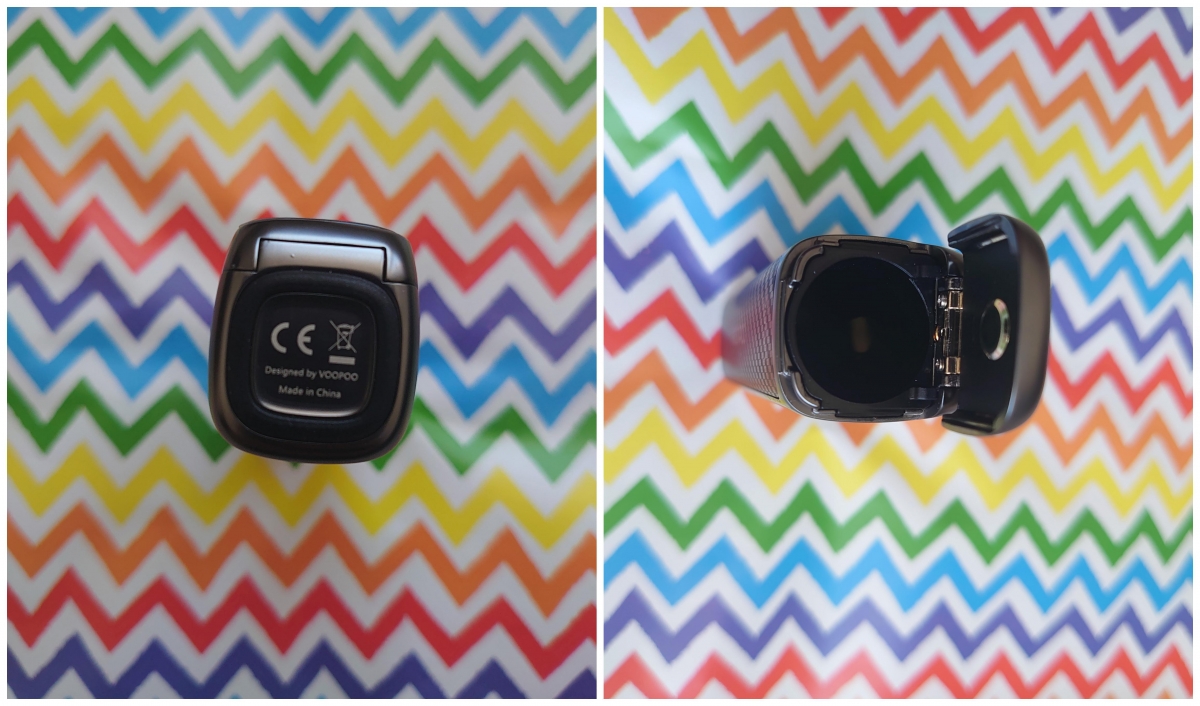 So let’s understand how it operates then so we can see if we love it. The device is powered by the Gene.AI 2.0 chip which means that it fires very quickly indeed, and with the USB-C charging providing 2amp charging can be charged in about an hour, however, there’s no pass through charging. The screen itself seems vibrant and bright at first, but take it outside and it can be tricky to see in any kind of sunlight. The screen shows what you need it to and it cleanly laid out. There’s a battery indicator, wattage, mode (S for Smart mode or R for RBA mode), puff counter, voltage, draw length, and a marker indicating which fire mode it’s in, a = auto-draw, p = button activated or a&p for both. There’s branding on the screen in the way of it saying “Vinci” in the top left, but I would have preferred it to show the battery as a %. It shows the battery as a % when you are charging the device so I’d have liked to see it here.

Standard five clicks on and off, three clicks changes between draw modes, Fire & - clears the puff counter, Fire & + locks the device, + & - opens the menu to change between Smart & RBA modes and also allows you to change the screen layout so it’s sideways, and all three buttons together shows you the device info. Smart mode will set the maximum wattage for the coil you have in so that you can’t exceed the wattage and burn the coil, and RBA mode allows you to use the RBA coil and removes this restriction so you can set any wattage you like. When you insert a new coil, the Smart mode will detect and set a recommended wattage for the coil, it works well and is definitely a good feature for beginners so they don’t accidentally go too high and keep burning out coils. If you leave the device for any length of time and then come back to it and try and vape, you have to press the fire button to wake the device then press again to vape, I’d rather just pick it up and press once to vape because if I wanted it off, I’d turn it off. It’s pretty standard for Voopoo devices, but one that still irks me a little.

The battery door on the X2 is just a basic slide then it pops open and it’s easy to do with just your thumb, slide the existing battery out and then push it down and back into place. It takes no time at all. 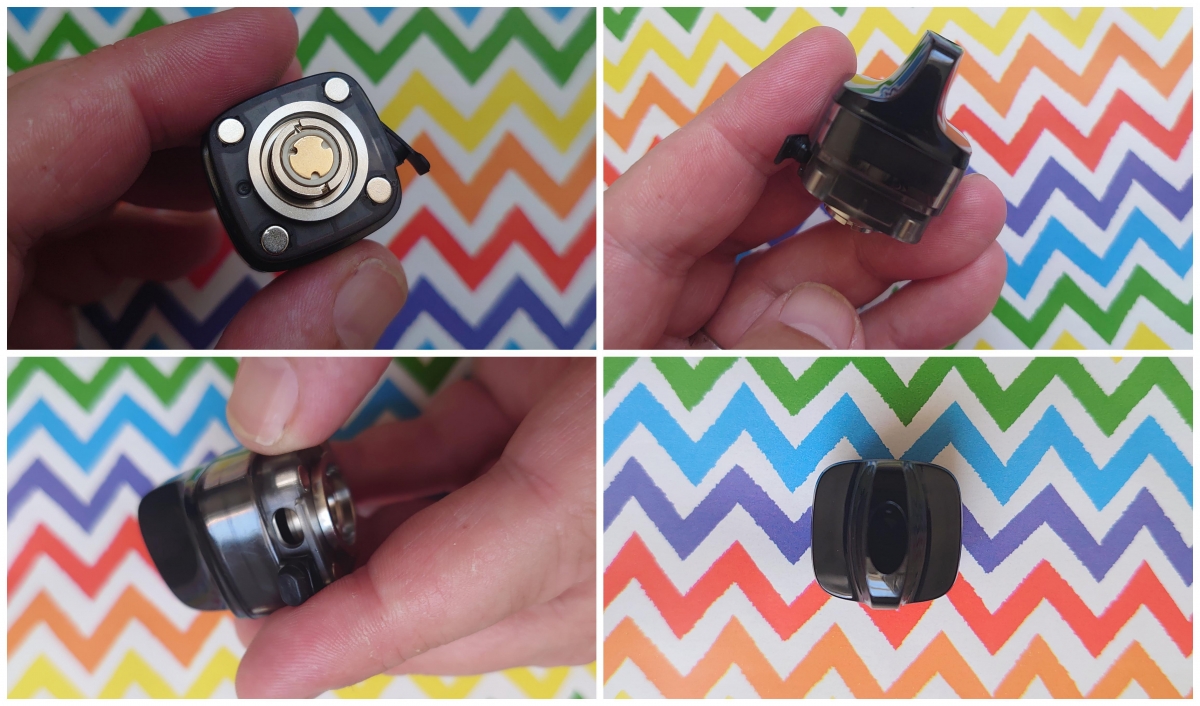 The pod is plastic and held in place by four strong magnets which keep it well in place, and changing coils is pull and push which makes it all very easy. The mouthpiece is comfortable enough with quite a wide bore which is great for RDL and DL but not so good for MTL. The capacity on the pods at 6.5ml is superb and they are clear meaning it’s very easy to see your e-liquid level. If you do get one of the these devices, make sure you source some of these larger pods as at 2ml for the TPD pods, they don’t last long before having to refill. The bung to reduce the capacity in the TPD pods is quite obtrusive, and the small window to see the liquid at the bottom makes it quite tricky to judge just how much you have left. Filling the pod is done by peeling back the rubber bung on the side of the pod to reveal the fill port. Filling the pod is by far my biggest gripe with this, I don’t see why they couldn’t have implemented a top fill system as this fill port for me was fraught with issues. The hole is quite small, and when you fill is prone to the liquid backing up and getting all round the port, but the main issue I had was with the bung itself. It’s designed as a small rubber tab which you peel back but due to the shape, it’s quite narrow at one particular point. I didn’t feel this is strong enough at all. My evidence? I managed to tear two different pods in this exact place when peeling back the bung. Others have reported no issues at all but to me it’s seems like a small design flaw and once the bung is torn the pod is useless! Just something to note so be careful when filling as I was very nearly tempted by Darth Vader over to the dark side as I nearly threw the thing at a passing duck cos it looked at me funny, the quacky little twat. I did contact TECC and they immediately sent me out a replacement pack so I have to say they dealt with it very well and it was a good experience from a customer service point of view. 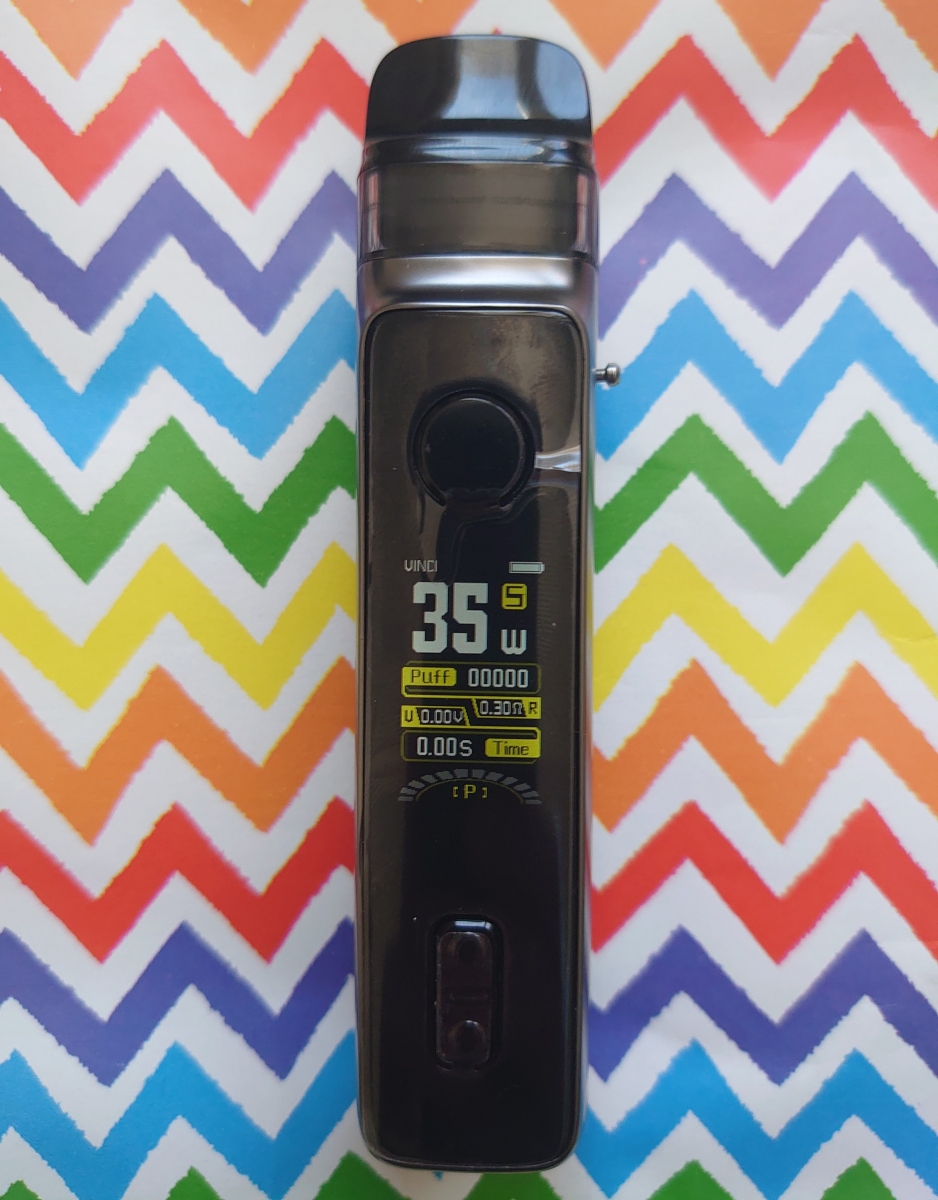 As the 0.3ohm coil comes with both kits, I decided to start here first. Loaded with my usual test liquid of Unicorn Shake, off I went. After playing about with the wattage and the airflow, I found my sweet spot with this coil at 32W with the airflow half closed. I found this to be a nice balance between warmth and restriction and was getting really good flavour from this coil with a good amount of vapour production.

Next up was the 0.15ohm coil, and I have to admit this is one of my favourite PnP coils as I really like the flavour at 62W and it was exactly the same here, really great flavour at 62W and just a lovely dense, flavourful vape, very satisfying. You can get just as good flavour if you turn down the wattage a bit and close down the airflow, but for me I like this coil with the airflow wide open.

Now to move on to MTL with the 0.8ohm coil. Now, don’t get me wrong the flavour from this coil is good but it’s just too loose here for a good MTL. Even with the airflow closed off, there’s too much air getting in for it to get that style of vape. You can open the airflow and get a half decent RDL draw from it, but if you want anything other than a loose MTL then I’d look elsewhere.

With all three coils I tried the auto-draw with Forest style results, mainly disappointing with the odd great one. If you open up the airflow fully and take it big deep hit, then you can get the auto-draw to work just fine, but anything else and it really starts to stutter, and for MTL it’s just not worth bothering at all.

"While human ingenuity may devise various inventions to the same ends, it will never devise anything more beautiful, nor more simple, nor more to the purpose than nature does, because in her inventions nothing is lacking and nothing is superfluous" – Leonardo Da Vinci

Overall this is a really good device, the coils give great flavour, it’s nice to hold and use, it fires quickly, and the newly implemented airflow works a treat. There are some nice touches like the rubber on bottom, and the design panels are good looking. For DL or RDL, it’s a very satisfying vape indeed. That the 2X takes a single 18650 is also a very welcome addition to the range.

However it’s not all a utopia, the airflow control knob sticks out too far, the auto-draw is more miss than hit, and it’s only ever going to give you a very airy MTL vape. The battery on the Vinci 2 just isn’t big enough as was only lasting me about three hours vaping at 42W, and the pod could do with some work around the bung, I implore you Voopoo, think of the ducks.

This won’t make it into my daily rotation, but that’s not to say it isn’t a good device as it really is and I like it more than you may imagine. It’s a solid device with smooth airflow and really good flavour. If you liked the original Vinci then you will love this if just for the excellent airflow options. If you do decide to get one of these, I would suggest you go with the X2 for the removable 18650 option and get yourself some of the 6.5ml pods as the TPD ones you will be forever refilling.