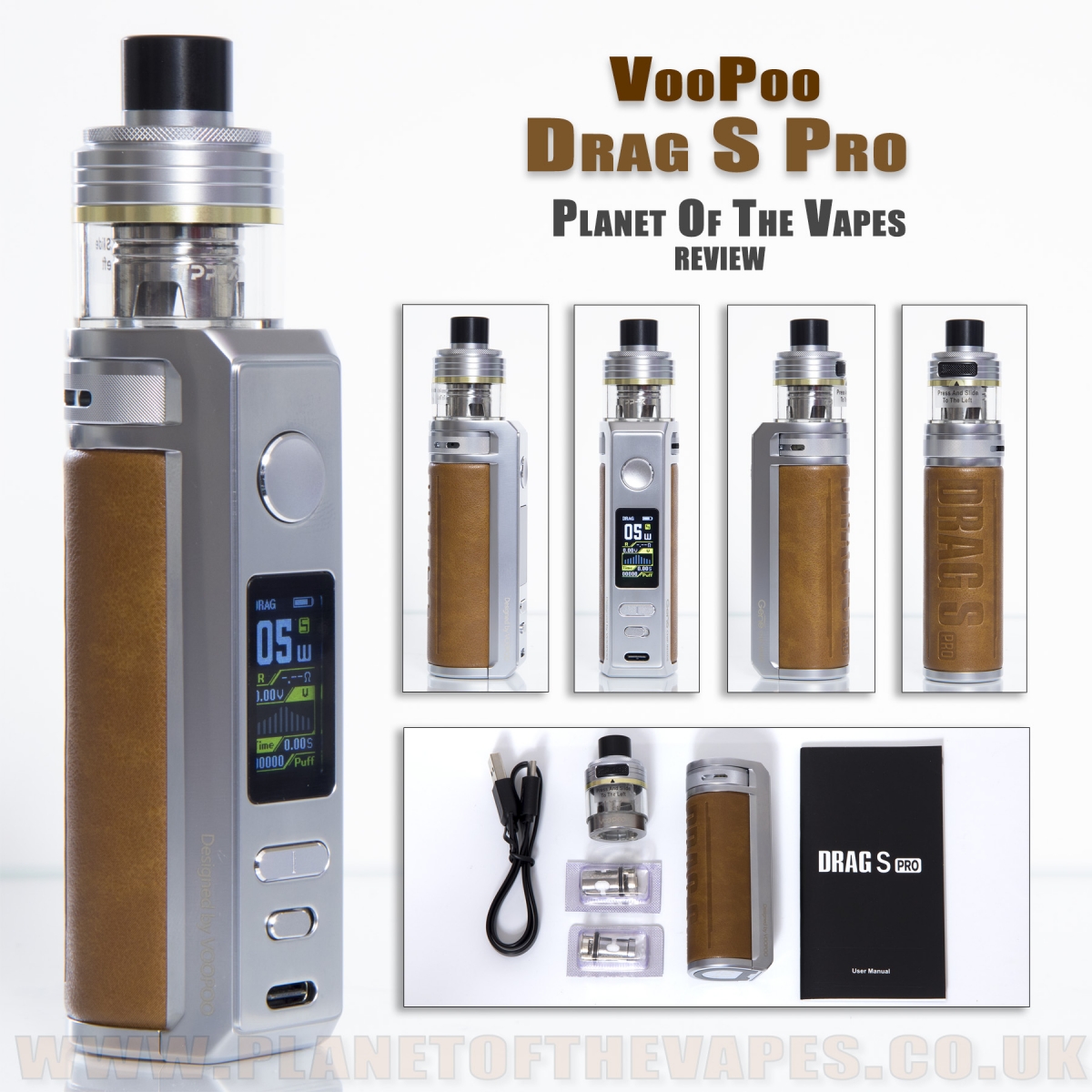 VooPoo’s pace of new products doesn’t appear to be slowing down any in 2021, although the new DRAG S Pro is more of an update than a new product. None the less, it appears to be a worthy upgrade over the original.

(Despite my toilet sense of humour I am going to attempt to omit any Poo puns or Drag Artist references throughout my review – wish me luck……….) 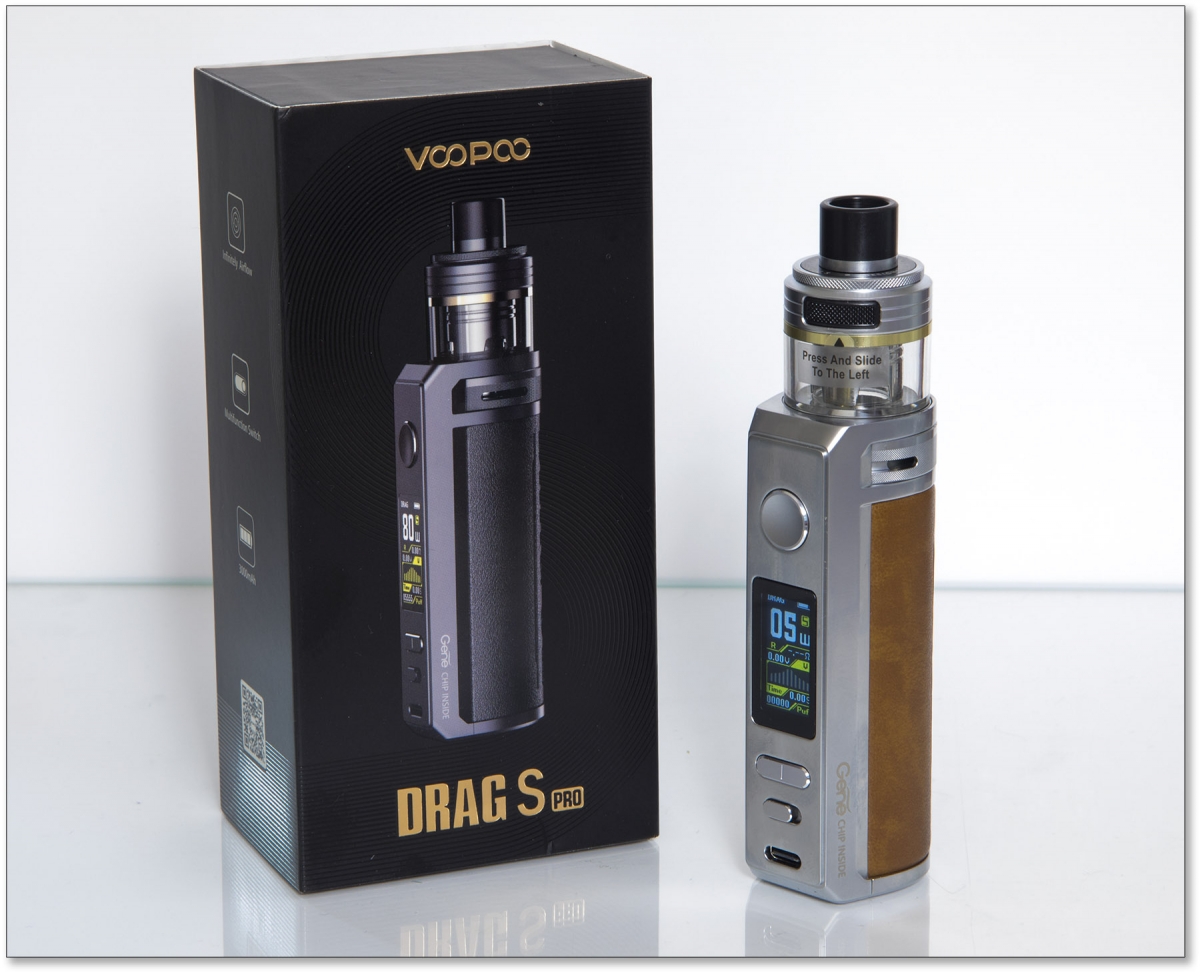 I haven’t tried the earlier version so I can only review it on its merits as-is, spoiler alert; the DRAG S Pro has impressed me a lot. Read on to find out why.

At the time of writing this review I don’t have the full specifications so I'm going by the box and manual, here are some of the highlights:

The kit comes in a two-piece box. There is an outer sleeve featuring a rather nice glossy embossed picture of the DRAG S Pro, but the colour is generic and doesn’t represent your choice, and the sturdier inner box is well packaged and should be postman proof. 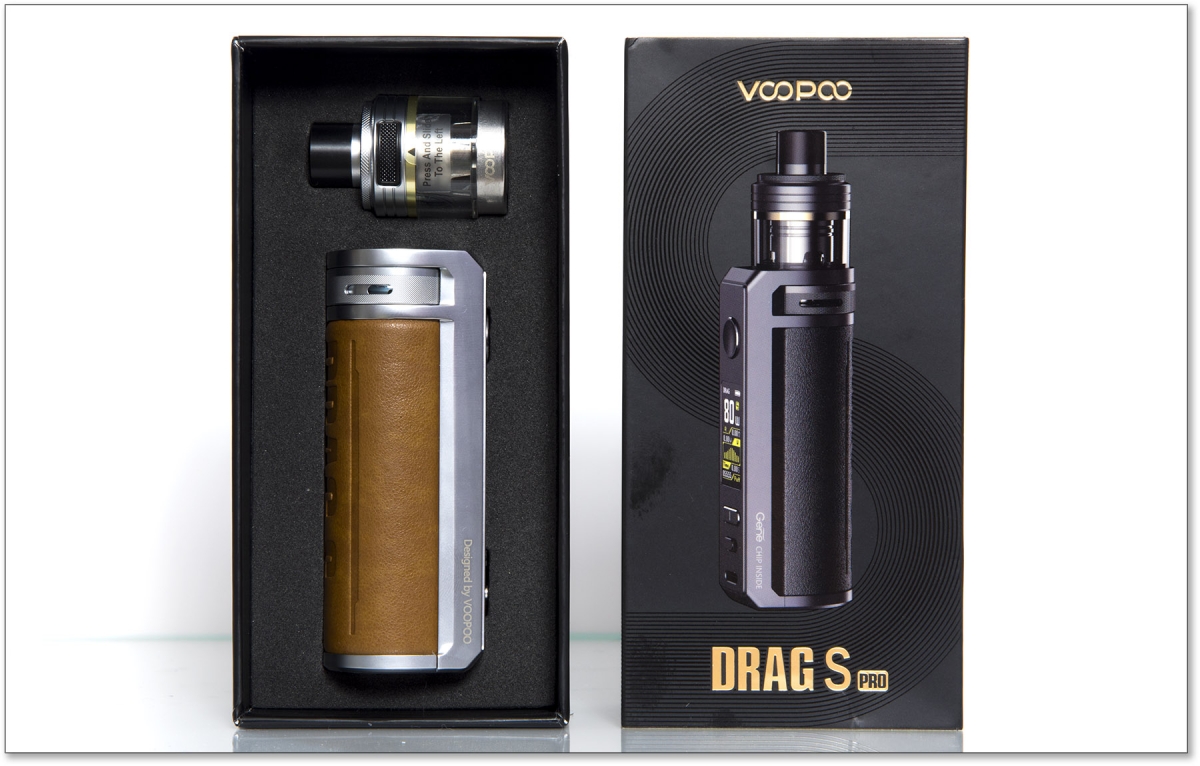 On the top layer is the battery and pod held in place with foam, underneath that is an envelope box holding the coils, manual and charging cable. 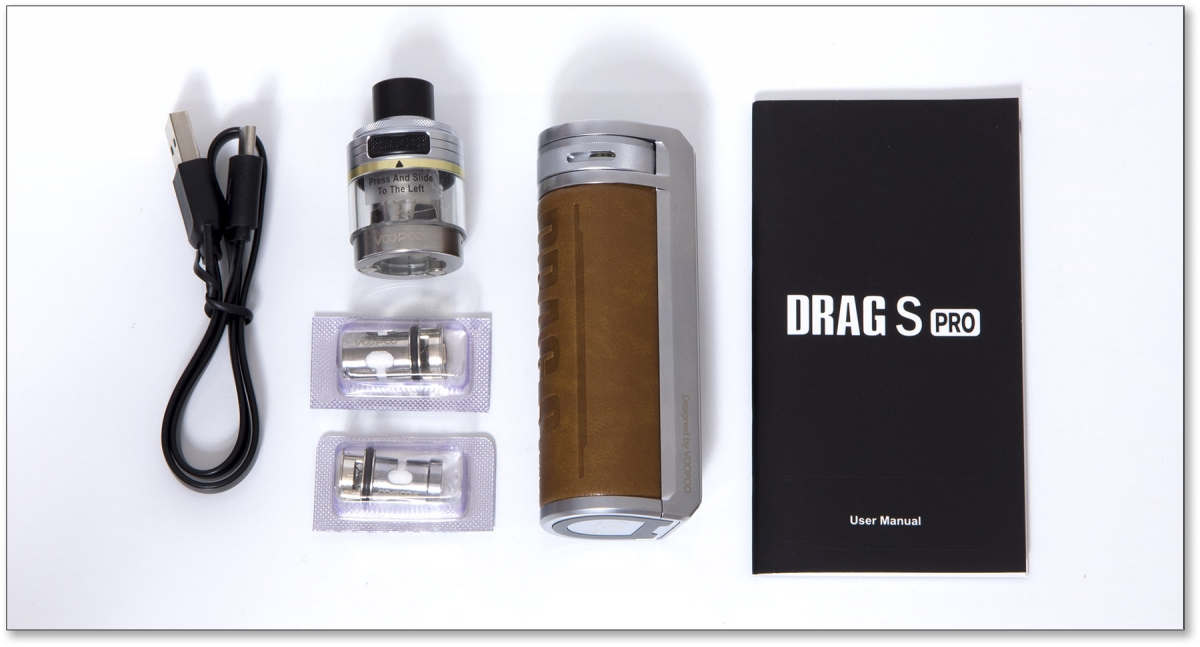 With the unboxing out of the way, I got down to inspecting the kit for the first time. There’s something about VooPoo’s construction that oozes quality, and the DRAG S Pro does exactly that. I felt that every fine detail was well designed and refined into a really classy, solid and ergonomic bit of kit. 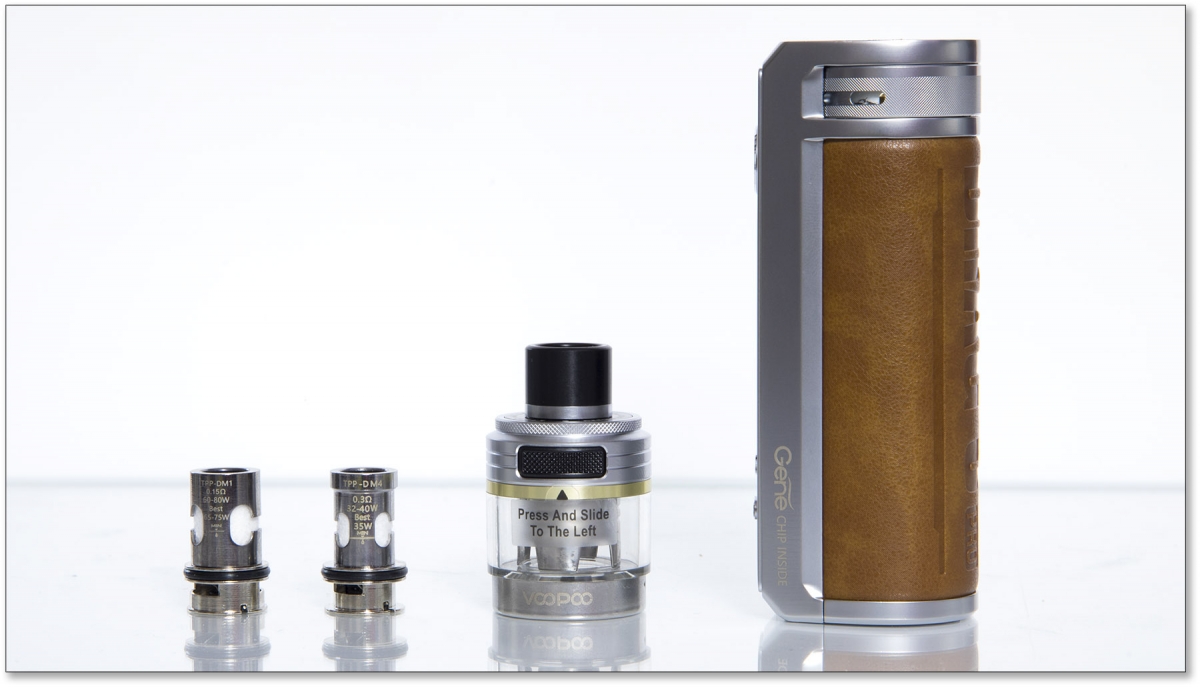 Part of a reviewer’s job is to nit-pick on some of the smaller details but I honestly couldn’t find anything cosmetically that I would have wanted to be improved, at a push the electronics had a couple of minor things but more on that later.

Little details like the rubber base insert showed just how refined this design was, the designers had really nit-picked beyond normal expectations. The control face is also well thought out. The buttons have limited travel and almost zero play, and I especially liked the inner curve of the fire button which makes it very tactile. 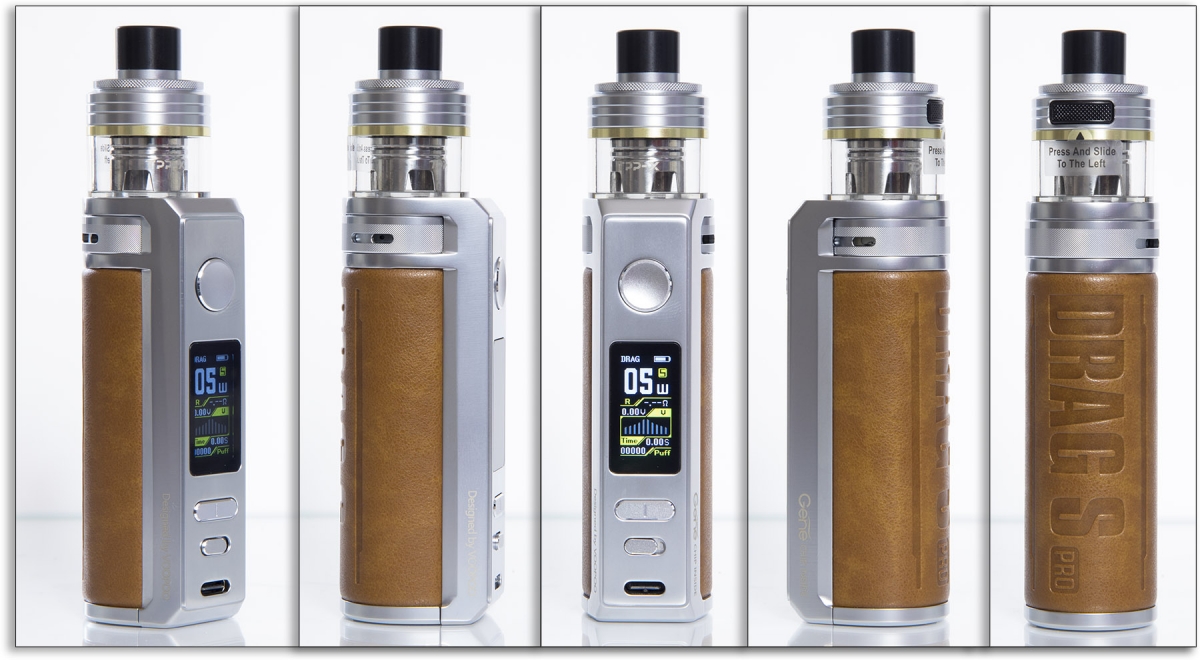 Every single edge and corner has been smoothed off and sculpted to be really ergonomic. It is finished off with the now common leather wrap which is embossed with the large ‘DRAG S PRO’ title, usually I would dislike such a large branding but it just works when on leather. VooPoo have kept the other branding very subtle with a really well contrasted and discreet print on either side of the front plate.

The airflow adjustment ring is one of the best I have seen on a pod system, not only is it very effective, it feels superb as the resistance is nothing short of perfect; as in not too loose that you could accidentally adjust it and not too tight as to make it difficult to adjust. I appreciate that we all have our own perspective on ‘not too tight – not too loose’ but trust me, this is spot on.

The final thing I would like to mention is the physical locking switch. I wasn’t expecting it so I found it interesting, though this is nothing new as it has featured in other brands, but it turned out that the implementation was a very nice surprise, but more on that later.

VooPoo appear to have paid as much attention to the pod design, the styling really suits the battery section. It almost looks as if it is permanently attached due to the recessed pod bay. Once removed, it is quite simplistic with the now common PnP (Plug & Play) press fit coil. 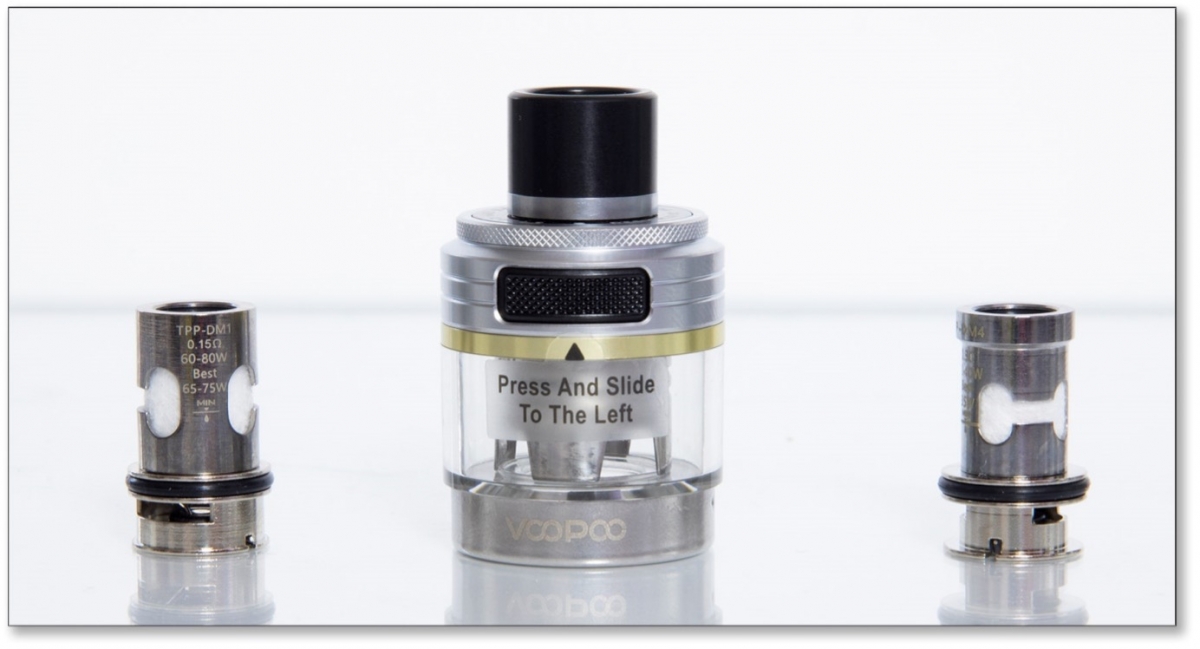 A nice surprise was the 810 removable drip-tip, this makes it easier to clean and you’re able to fit your own. That said, I think the fitted one suits the pod nicely with the silver base ring.

The included coils have nice large wicking ports, this for me was very promising as it not only helps the coil wick faster, but it also prolongs the coil life in my experience. They are the new PPT DM coils of 0.15Ω and 0.3Ω which are clearly aimed at DL (direct lung) users, I’m afraid I am clueless as to what the difference is compared to the older PnP coils, but the pod is also backwards compatible so you can also use the full range of PnP coils. 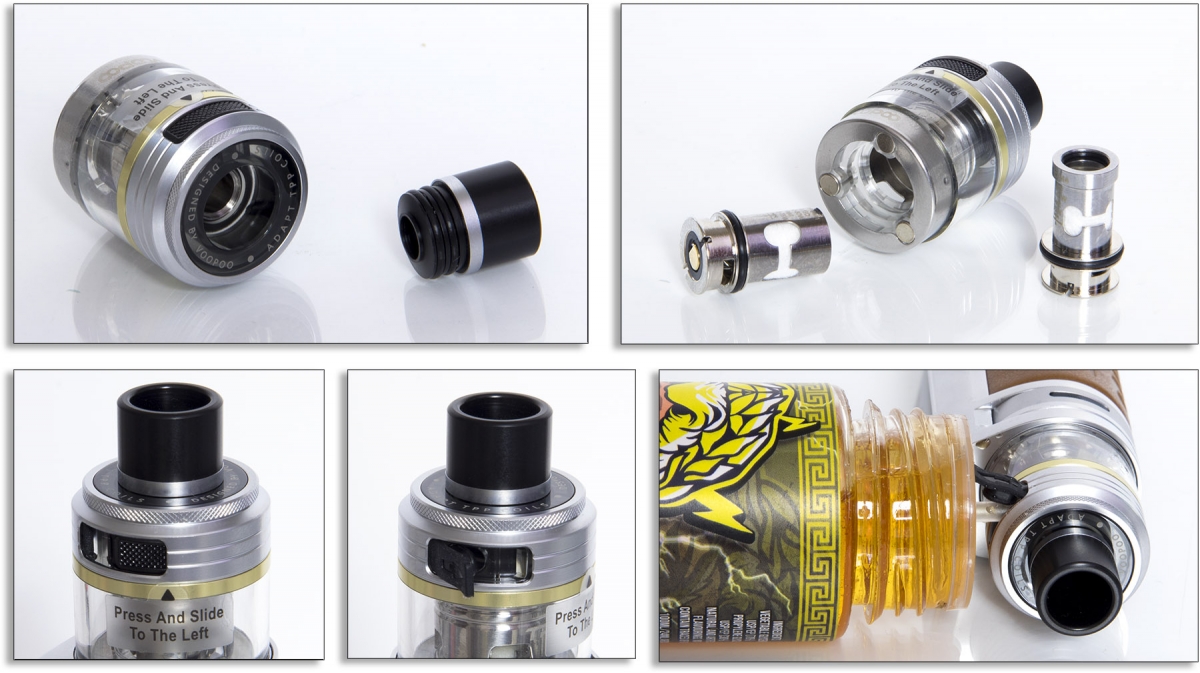 The innovative filling method features a rotating ring at the top. To access the fill port you need to push in a little button and rotate the ring clockwise until it reveals a silicone filling bung which you need to pick open with your fingernail, once open it is big enough to fit a standard short-fill bottle nib but due to the location it was a little restrictive and almost a side-fill which was a little messy on the first time but I soon got used to it. Although I found it quite novel, I didn’t exactly find it very convenient, hats off to them for trying something innovative though. 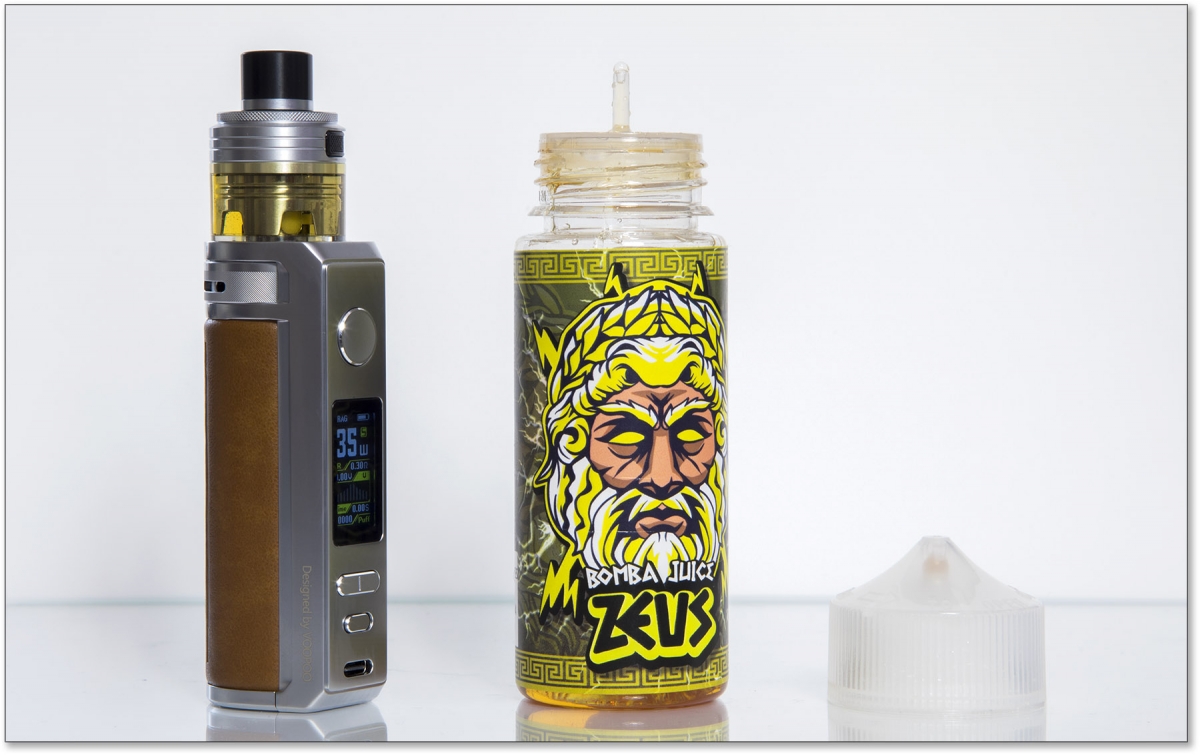 So, with the coil saturated and primed, it was time to set it up and check out the functions. I deliberately decided not to read the manual and see how simple it would be for a novice to use.

It turns out that you almost need to do nothing at all, the DRAG S Pro defaults to ‘SMART’ mode which automatically sets the wattage to the recommended power for the coil chosen and will only allow you to increase it to the maximum rating of the coil. This is perfect for new vapers to avoid nasty dry hits and burning out the coil too early, I honestly feel that users do not need anything else other than this mode when using stock coils.

There are a couple of features that novices will find handy though; firstly, and it was a total surprise for me, the DRAG S Pro has auto-draw by default. Auto-draw is nothing new in the pod market but I’ve never found it effective for airy DL vaping, but this has been very effective and turned out to be one of its main strengths combined with the locking switch. Secondly the other feature beginners will need is the adjustable airflow ring. 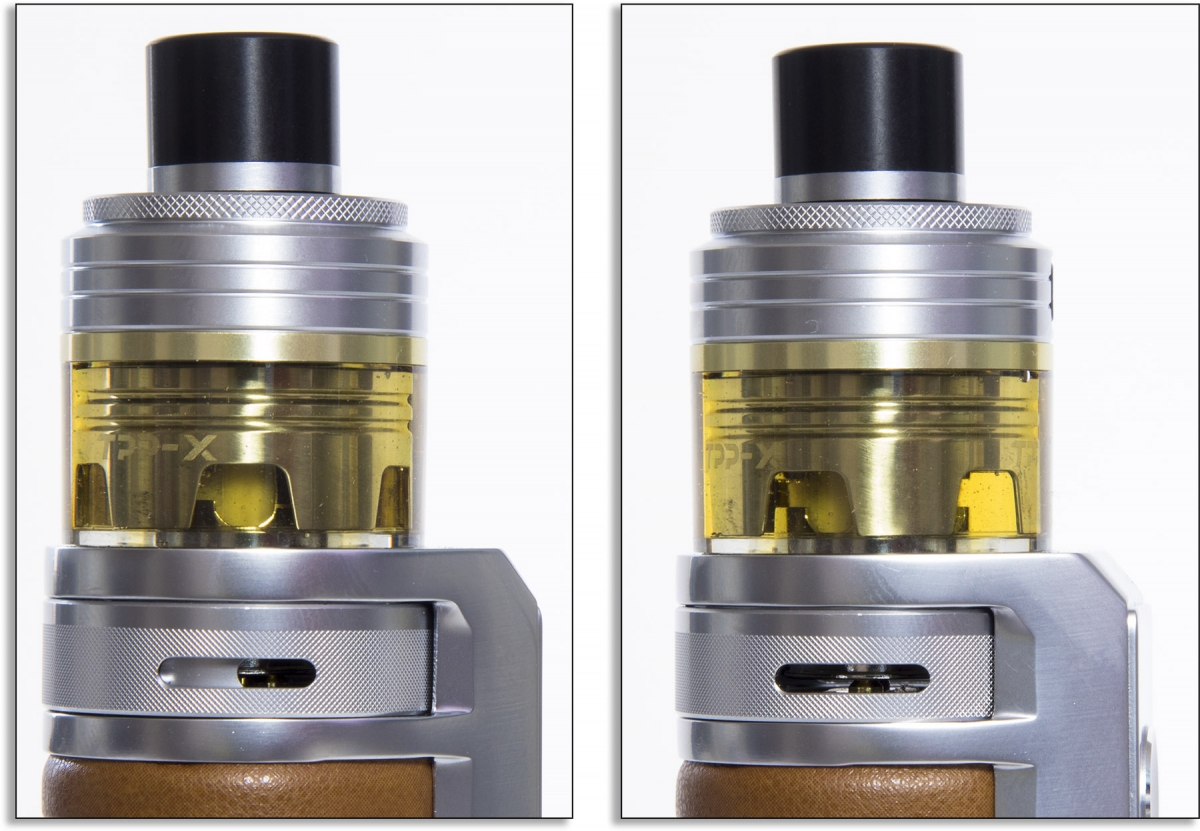 As mentioned earlier, this is so effective and offers airflow from an airy DL to a very restrictive RDL. That said, at a push it will go as tight as a MTL draw but with such a large mouthpiece I wouldn’t bother with MTL personally, but it was impressive that it could go down that tight.

The user interface has been kept easy to navigate and setup: 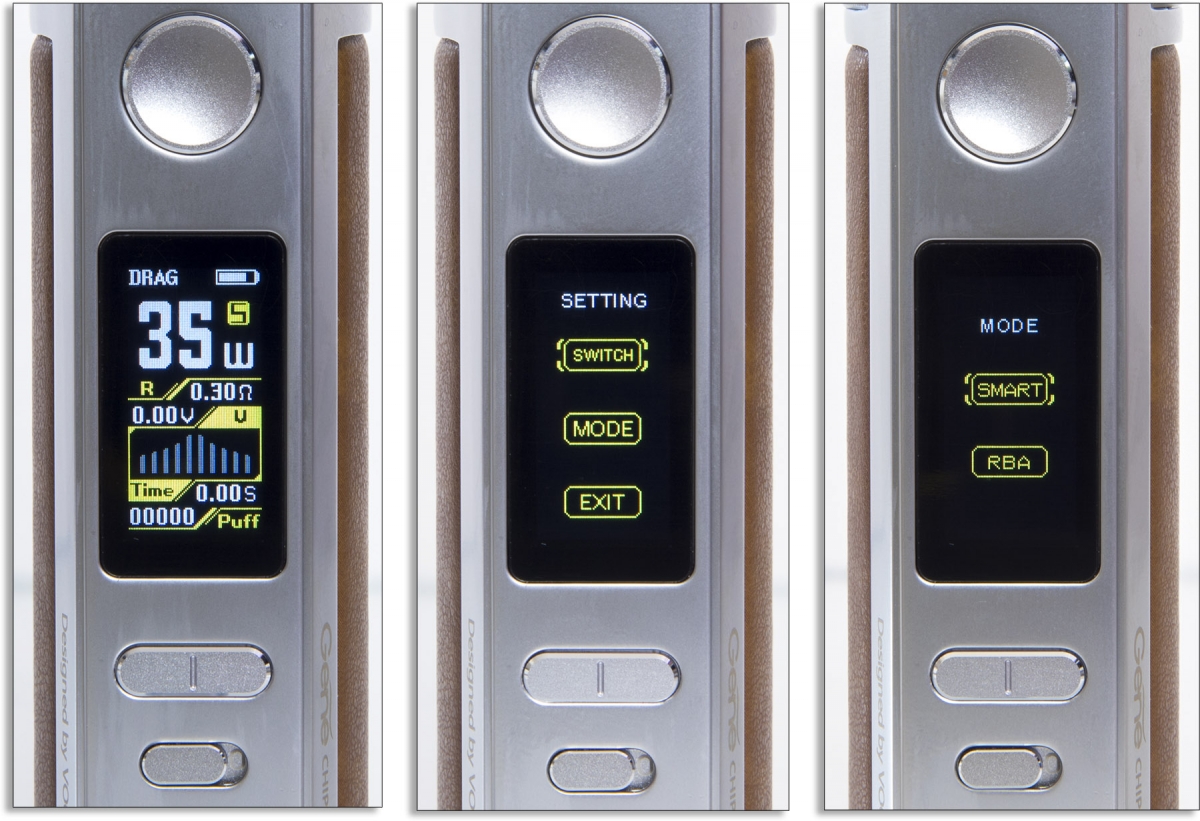 The main function I found to be the pick of the bunch was the SWITCH which gives you the option of using the physical switch in two different ways; by default it is a physical locking switch of all the buttons, the second option is to set it as a physical On/Off button which fully powers the device on or off. Both modes are incredibly handy though the locking option proved to be the best in action due to the auto-draw still functioning with the buttons locked. Basically you didn’t need to use any buttons other than the occasional fire to wake it up. Why did I find this so handy? Well it made it perfect for my pocket or bag without accidentally adjusting or firing the mod.

For more experience vapers, the DRAG S Pro offers more handy features but since I don’t have the RBA or the optional 510 adapter, I couldn’t explore these functions. There is also another version of this kit that has 510 connection instead of a pod though; DRAG S PLUS Pro.

The screen is nice and bright though there’s no options to change the colours or brightness. My only niggle is the DRAG logo is pointless and a battery percentage would have been much better. I think with the large DRAG embossed into the leather, we should have already have guessed by now that it’s a Drag.

But onto how it all vapes. In a nutshell, the new TPP coils are both superb! I started off on the lower powered DM4 0.3Ω rated between 32-40 Watts. Smart set it to 35 Watts which turned out to be ideal for me, flavour and vapour production was superb, it wicked nice and fast and kept up with chain vaping without any hint of a dry hit. This will be my coil of choice for when I need a longer battery life as it lasted me most of a day and evening. The DM1 0.15Ω coil was a bit of a beast and is rated between 60-80 watts, 70 watts being the optimum for me. The flavour and vapour was on another level, it performed flawlessly without any dry hits and would be my coil of choice for a fuller, more intense vape where battery life wasn’t as important. It lasted me a good six hours though.

The 3000mAh battery certainly made the difference on this kit, but I did notice the power drop off as it discharged but still managed to carry on vaping fine until I got the battery low warning. Charging time was superb due to the fast charge 2.5 Amp rate, but it did feel pretty warm as it charged and the only battery ventilation was potentially from the USB port.

With the looks, handling, and performance of the DRAG S Pro kit, there’s very little, if anything, not to like. Although it offers the capability of using an RBA or a 510 adaptor, I think the new pod on this kit is the far better option. It never felt like a pod in use and I often had to remind myself that it was. This will be a great starter kit, but it offers such a good DL vape that I think experienced vapers will also enjoy it.

The highlights, other than the coils, were the airflow, the auto-draw, and the useful physical switch. It might have done just enough to make it my new favourite DL pod/mod, time will tell but so far this is my weapon of choice.

Nope, I have none! At a push the lack of battery percentage is a niggle, but the icon was fine when in use as it was pretty accurate.

VooPoo’s designers should be very proud of this kit, their refinement and attention to detail won me over and I really appreciate it. VooPoo’s extraordinary roll continues, and I eagerly wait to see what else they have up their sleeves. 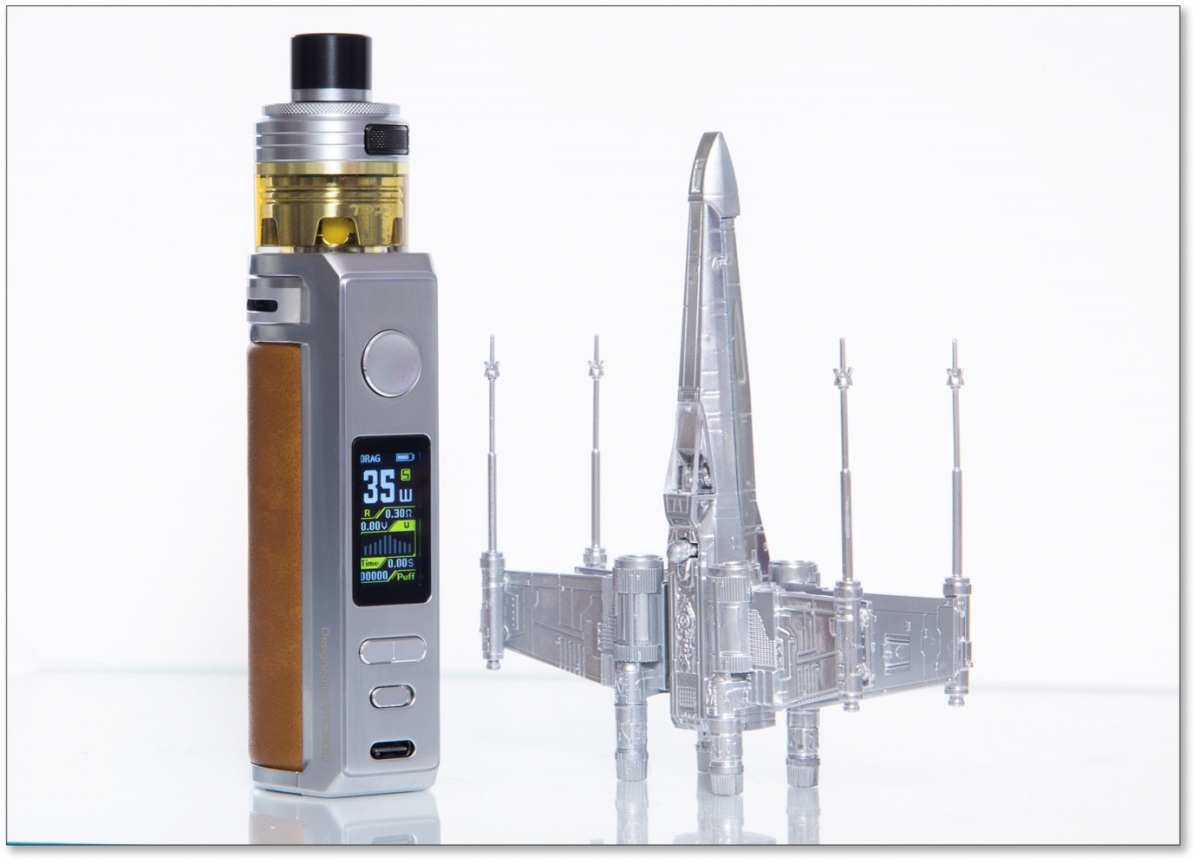