VooPoo sent us an advanced sample of the new DRAG Q pod mod kit to try out, and it’s certainly different in a few ways. This kit is clearly aimed at MTL users, but it is also capable of a decent RDL vape too, we put it through its paces and see if this Drag Q will win the race…. 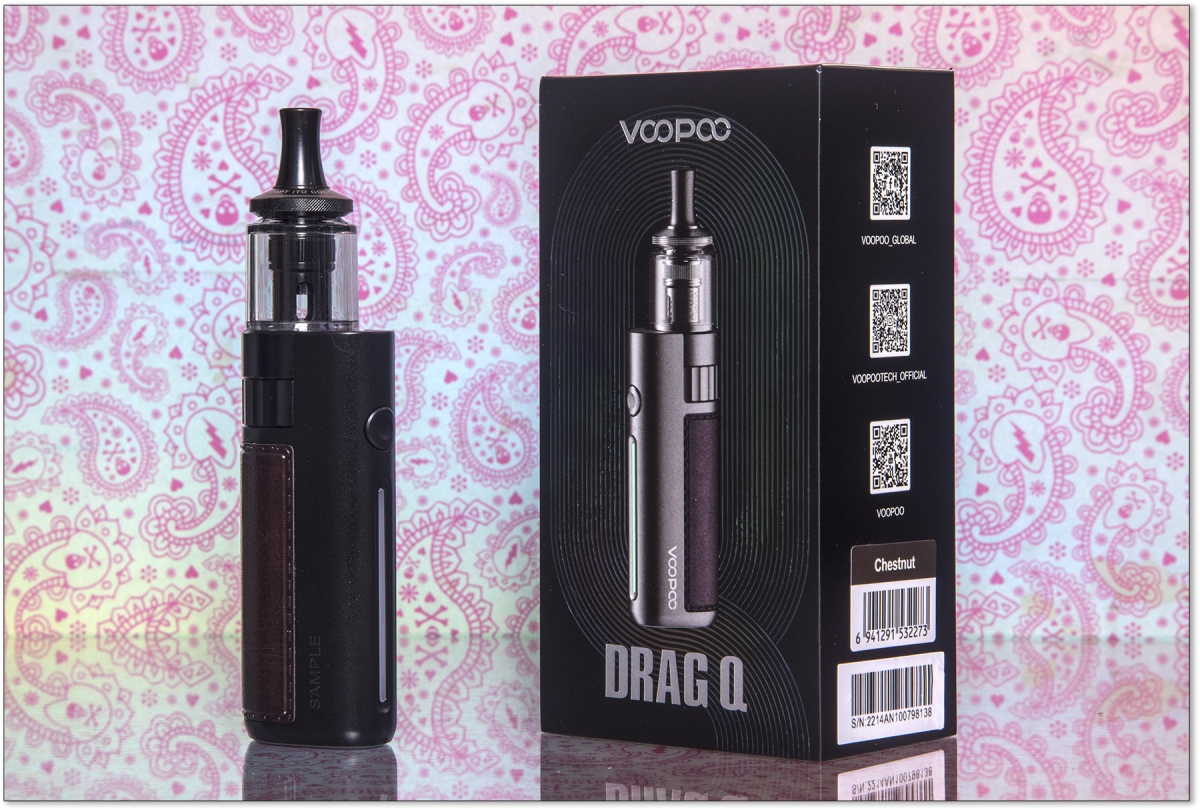 There’s no official specs etc. at the time of writing, but VooPoo provided their bullet-points:

Erm… I’m not sure what to make of some of that, I have no idea what ITO stands for or what shape a Lune is, but I can verify the first point about the airflow and power sync, this feature sure is something unique and I like it a lot.

A few more bits of info either from observations or from the box info:

The DRAG Q kit comes in a two piece box, there’s an outer box that slides up to reveal the very sturdy inner box, VooPoo even popped on a little pull tab onto the box to help you open it. 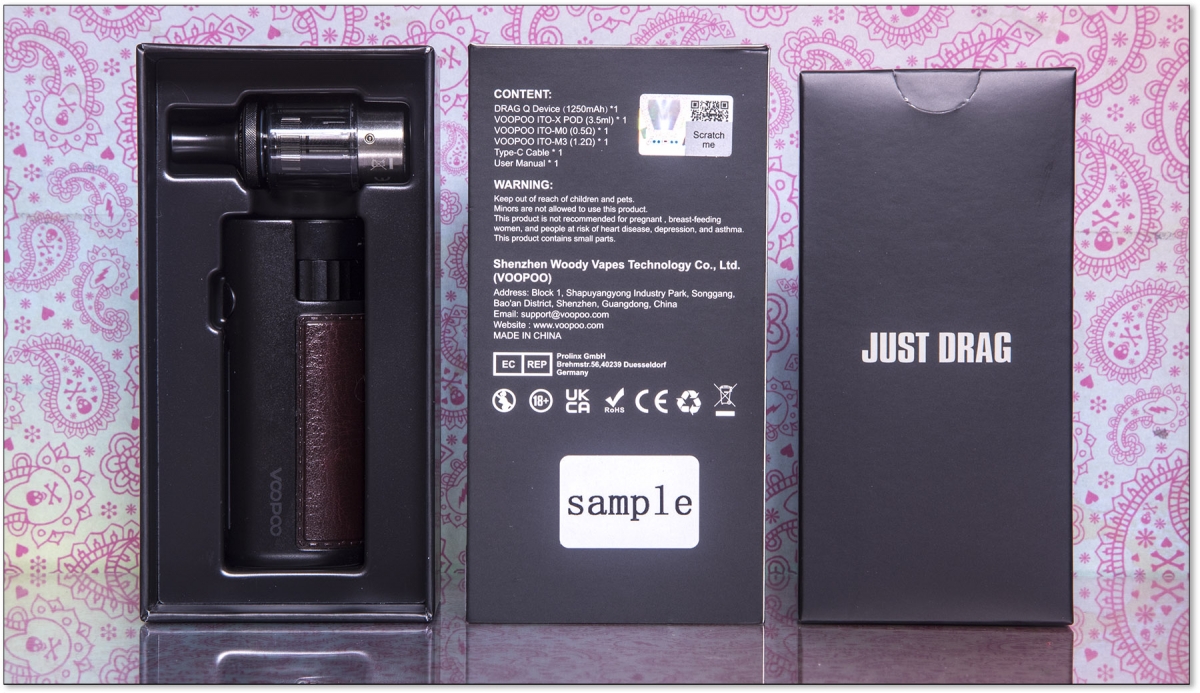 The packaging is quite clever as the accessory box acts as protection for the kit and eliminates the need for a lid-box yet it is still sturdy enough for the courier to lob around without damaging the contents. Underneath the accessories is the main mod and tank held in blown plastic.

Contents wise; you get the mod, the pod/tank, two different ITO coils (0.5ohm and 1.2ohm), a charging cable, and the manual. The manual is brief but there really isn’t much you need to know and the controls are intuitive.

Since I had no clue this was coming out or any preview information, it was a complete surprise and a very pleasant one at that, it just oozes MTL-ness even though I didn’t know if it was specifically designed for that at this point, but the skinny drip-tip gave good indication.

I was desperate to get the photos out of the way so I could get testing this intriguing device, the styling lends itself to an old-school mod and tank combination but the tank is a pod style push fit. Although the lines of pods and tanks have become very blurred, I would call this a push fit tank rather than a pod, it looks the part and the top-fill is very tank-like.

I’m not usually into dark coloured vape stuff but I liked this one, and the dark brown leather wrap really suited it. The base has a rubber pad which is perfect for standing it on tables etc. without scuffing the surface or the mod, but the unusual grey colour looks a bit odd (this might be black on the retail version).

Apart from the tank, the other part that stood out was that intriguing wheel thingy, I simply thought it was the airflow adjuster, but I was wrong.

It is actually a combined power and airflow dial, the more you open the airflow, the more you increase the power and vice-versa. I was left to figure this out on my own but it fascinated me and it turned out to be VERY effective, in fact if there’s one stand out feature of the DRAG Q, I would say the wheel is it.

Aside from its functionality, it is strangely satisfying in its action. It clicks as you rotate it in a ratchet style, and as you rotate it the LED bar increases or decreases accordingly, this small thing amused my little mind for a while.

The tank fitting is unique as it is held in place with spring loaded pins on the tank base, it kind of looks like a bayonet bulb fitting and works surprisingly well. It needs a firm tug to remove but it stays in place firmly once pushed back in, and you get a tactile click when you push it in, there’s no way this is going to pop out by accident.

The new IOC coils have distinctive baby-blue O-rings and have two flats on the base that need lining up to fit into the tank, you can see from the coil that VooPoo have made them leak resistant with the airflow holes above the base and they work perfectly as I’ve not had a single piddle or puddle from it during use.

Like a pillock, I forgot to jot down the coils wattage range but it doesn’t really matter as there’s no screen and the power is controlled with the dial, but the 0.5ohm coil is clearly more for RDL vaping and the 1.2ohm for MTL.

Filling is achieved by unscrewing the top cap a third of a turn anti-clockwise, the fitting is very good and it clicks back into place. Once removed, the top fill ports are exposed with a silicone seal that has two holes (don’t fill through the centre hole!), you can only fit small nozzles into it and they don’t push in very far as an internal lip gets in the way, but it was still easy and mess free to fill.
(The drip-tip is removable but proprietary as it fits over rather than inside) 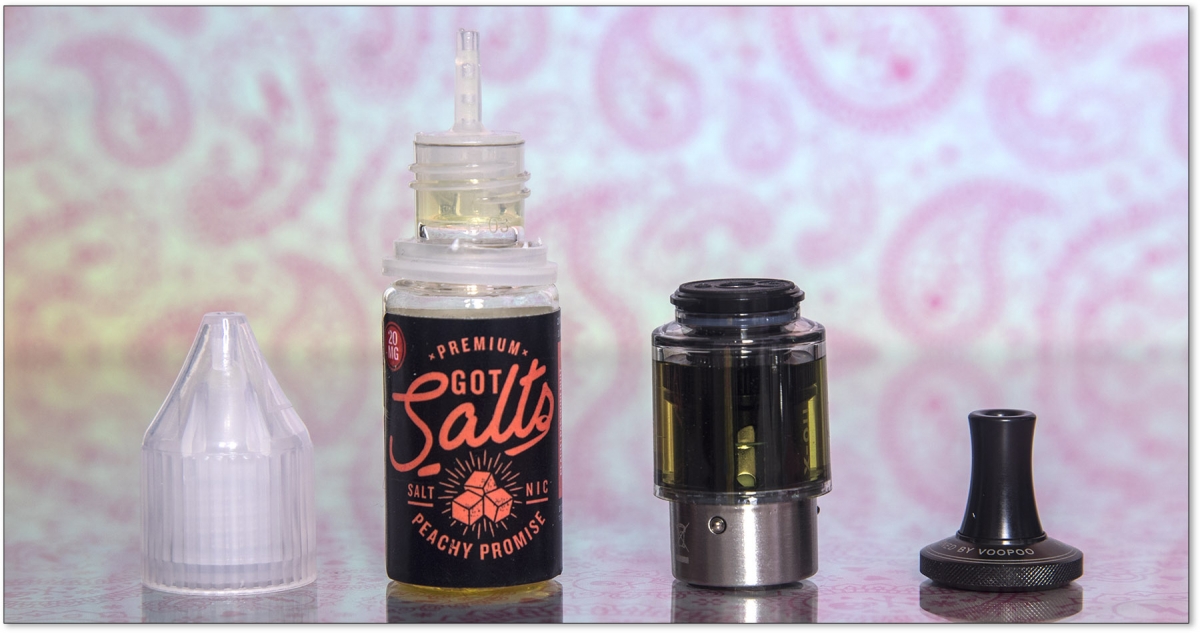 Though the tank is tinted, it is still clear enough to see your juice (and its colour) through and you get to see every single drop, you can also see the wicking ports which are low enough to almost run empty so you shouldn’t get caught out by running out of e-liquid.

The controls of the DRAG Q are simplicity itself and you are unlikely to touch the fire button other than to turn it On/Off, the power/airflow dial is all you need other than that.

That really is all there is to it, though it might sound odd that the power is tied to the airflow control and it might bother you that you can’t do this separately, but I can tell you VooPoo just nailed it, at either end of the scale I found the vape to be spot on (not too warm or cool). MTL was exceptional and I wouldn’t change a thing if I could. 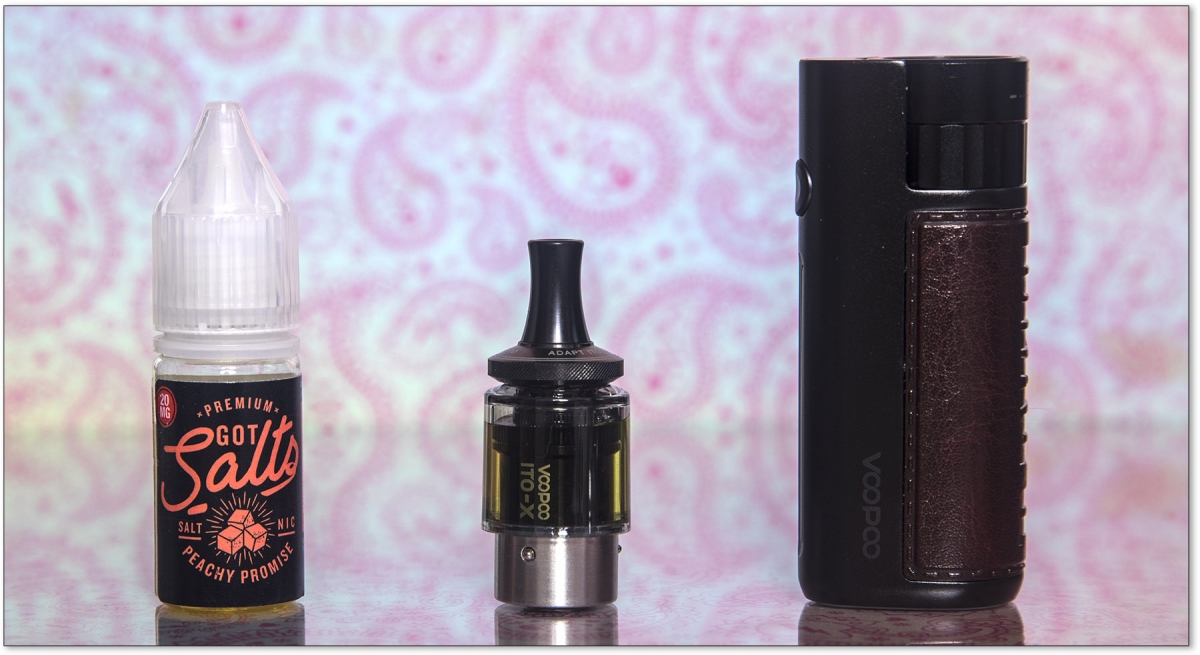 I went straight for the 1.2ohm coil as I so wanted the DRAG Q to excel at MTL and I wasn’t disappointed, with the airflow/power dial at the minimum it was as tight as a nuns chuff, a proper cheek pulling draw, and the power was spot on. Just one click looser delivered a little more power but it was still a tight enough draw. As you opened the airflow more, it applied a little more power but it never got too warm and you should find your sweet spot for either a tight or loose MTL draw.

So the airflow and power delivery was spot on, how about the flavour? Well the DRAG Q delivered the flavour perfectly too and at this point I was more than happy with the DRAG Q, actually I was loving it and was really impressed with VooPoo’s efforts on a proper MTL vape.

So we know it nailed MTL, how about RDL? Well VooPoo nailed that too, I did try the 1.2ohm coil first and the RDL draw was pretty restricted but it got better with the 0.5ohm, and it all felt proper RDL with impressive flavour and vapour production relative to its power setting. I thought the GeekVape H45 was my new RDL vape but the DRAG Q is just better and I could fine tune it better which created a dilemma as I only had one tank, I think I will have a second tank and run it for both MTL and RDL.

The battery life was really impressive and lasted me over a day and night using the 1.2ohm coil on low power. The 2 Amp charging meant that I didn’t have to wait long for it to recharge and it took around forty minutes tops.

As for the overall experience, everything was pleasing. It felt good in the hand, the auto-draw worked flawlessly for MTL and RDL, it fitted in my jeans pocket nicely though a little weighty for a shirt pocket. The pleasing visuals and the clear view tank added to the in-between vape admiration, and finally the coil life was much better than my previous VooPoo MTL favourite pod/mod, the Argus. 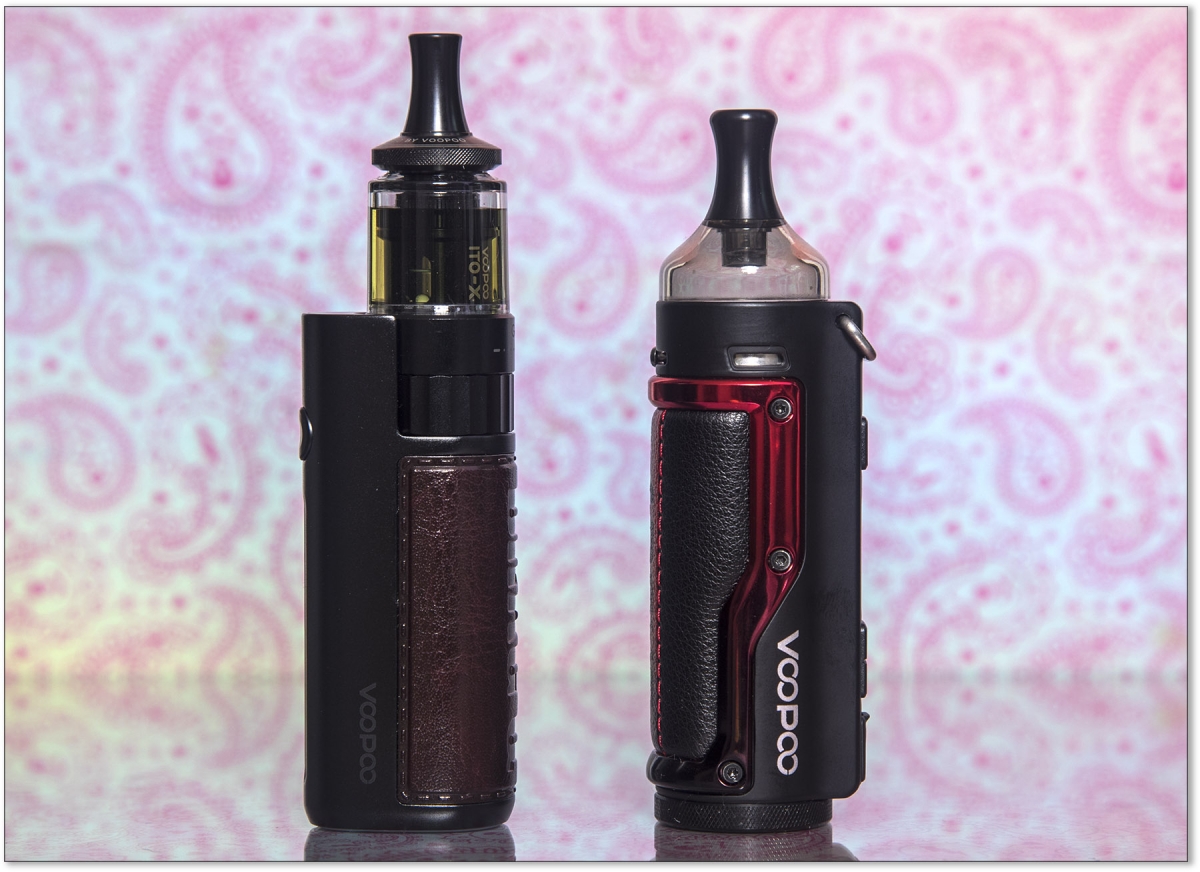 I still love the Argus but the 1.2ohm coil life was dreadful so the DRAG Q is a clear winner there. The DRAG Q is also smaller, easier to use and has a much tighter MTL draw, I loved the Argus’s looks but it is now firmly retired. 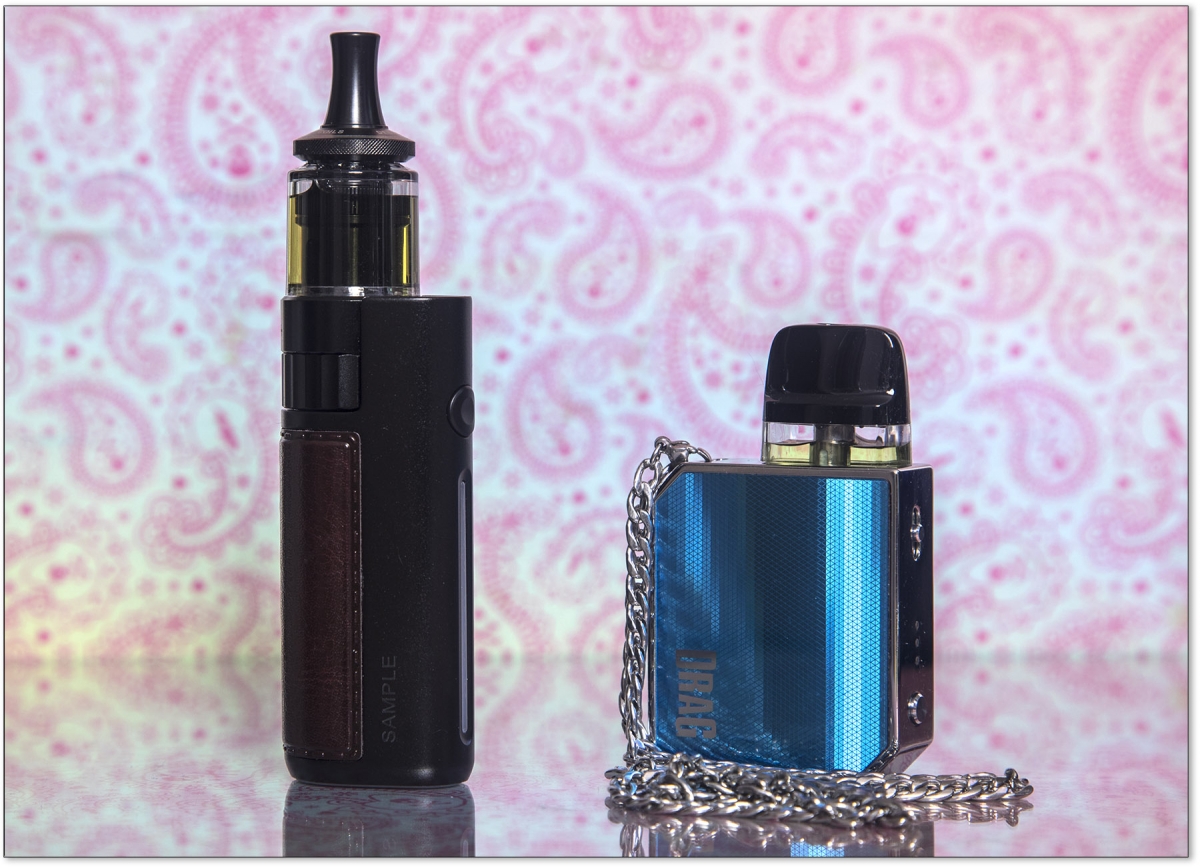 The best MTL pod ever (so far) for me has been the DRAG Nano, I still can’t fault it after many months of use and it’s my main pod while not reviewing new kit (but it is always nice to go back to) so it was a big ask to see whether the DRAG Q is better. I would say the vape quality is marginally better with the new coils, it’s less wasteful due to replaceable coils, the battery life is far better and it has that proper mod/tank appeal, the vape is easier to fine tune and the capacity is higher, a clear winner right? Not quite, the DRAG Nano still holds the best pod crown, but the DRAG Q now holds the best pod/mod crown. I tend to use the DRAG Q around the house but the DRAG Nano is always around my neck when I’m out and about. 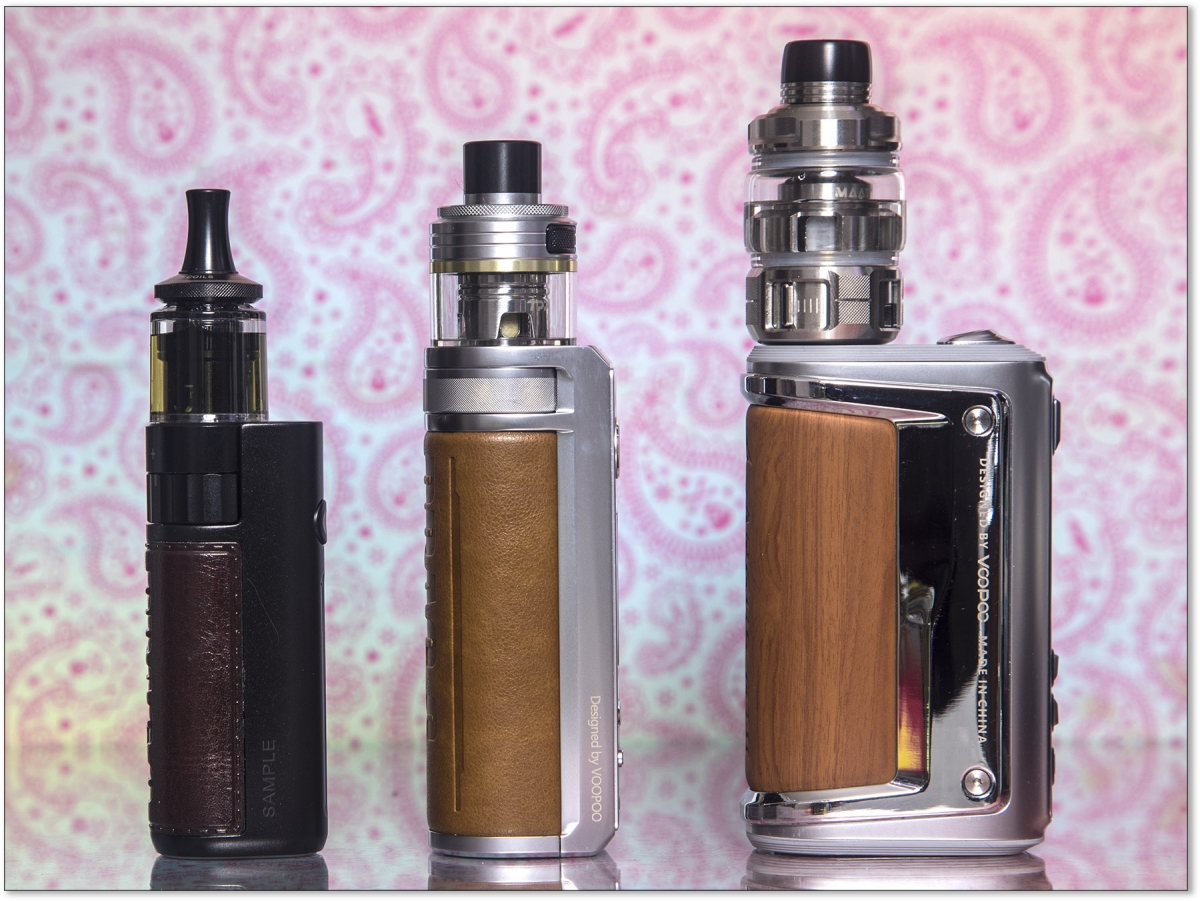 VooPoo are impressing me more and more over the past couple of years and I love that they are always looking to better their products. Better still, they have a device to suit all styles of stock coil vaping from tight MTL to cloud chucking DL, the DRAG Q is so innovative and rather than a gimmick, the combined airflow/power dial works really well.

I think that the DRAG Q is the best MTL device that VooPoo have produced so far, the innovative airflow/power wheel is far from a gimmick as it works so well and enables for a smart incrementally tuned vape, from a tight MTL right up to a RDL vape, with superb flavour from the new coils which last a decent amount of time. It’s now time for me to attempt to find any cons, but it’s all pros so far.

Niggles? The only thing I can think of is the un-matching grey rubber base but that might just be a SAMPLE thing?

The DRAG Q was a pleasant surprise from start to finish, I’m a fussy sod when it comes to MTL vaping and this exceeded my expectations. The innovative design shows a lot of care and development went into the DRAG Q and I can’t wait to see what else they come up with in the future, I liked this that much that I avoided a wealth of DRAG Queen puns in this review! 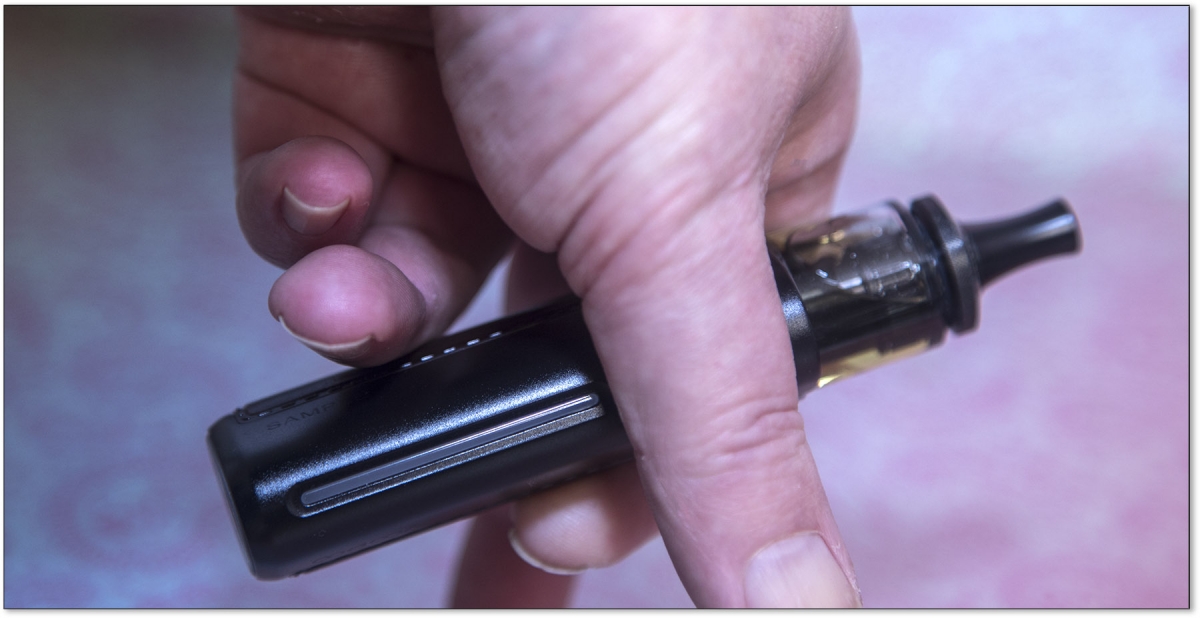