Supplied by VooPoo for review
https://www.voopoo.com/drag-series/drag-nano-2.html
Around £27 or less

Pandemic life might be a ‘drag’ but VooPoo’s latest MTL pod is a ray of sunshine. The Drag Nano 2 is easily VooPoo’s best MTL vape yet, read on to find out why I rate it so highly.

The Drag Nano 2 kit is well packaged and is protected enough against a postman after receiving his payslip. It has an outer sleeve and an open box inside. The cover shows the generic photo, and your colour choice is on a sticker. 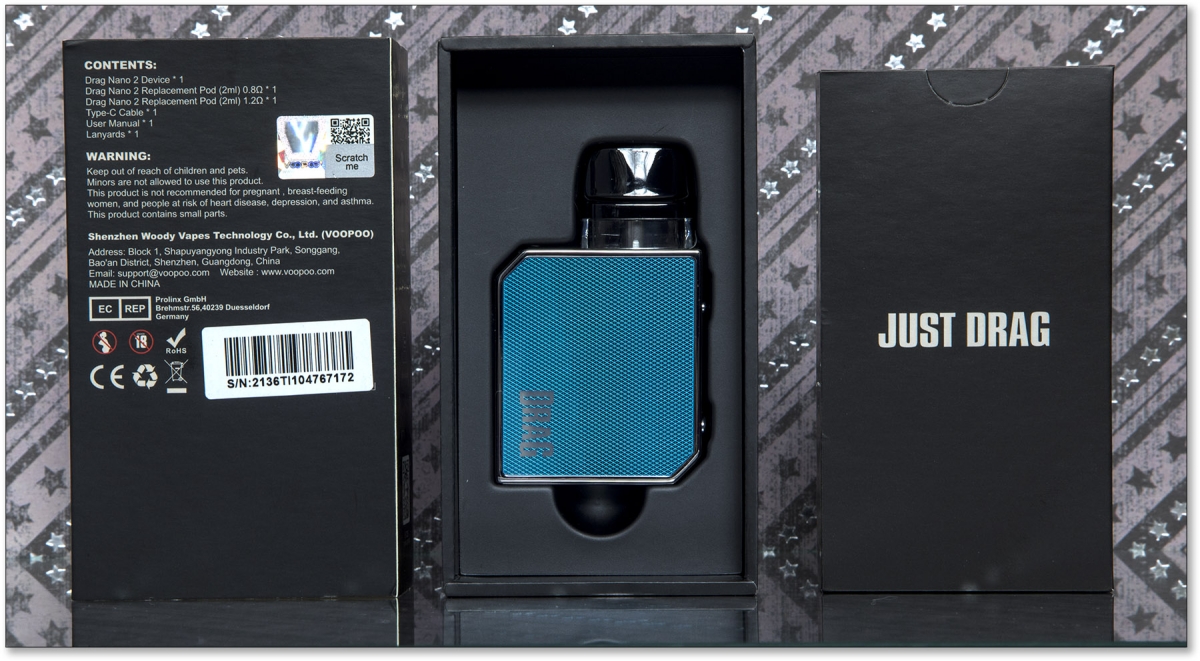 All the accessories are in their own box and are on top of the device for added shipping protection, the Nano 2 sits securely in a blown plastic tray. The box of accessories adds to the value of this kit:

You get an additional pod, a charging cable, the user manual and a nice quality lanyard chain, you couldn’t ask for more in a pod kit.

Even before I picked the Drag Nano 2 up for the first time, I already loved the look of it. The holographic style panel looks fantastic, the iridescent effect as you rotate it in the light is hypnotic and looks interesting at any angle. The resolution of the pattern is crisp and ‘nano’. Best of all, it is fingerprint resistant.

One of the quirkier things about the Nano 2 is the exposed/protruding pod which I wasn’t expecting to like, but it soon turned out to be ideal for two reasons; firstly the juice visibility as you can see every drop, and secondly it feels better in your mouth as you’re not pushing your lips onto the device itself.

The size is just right for a mini pod and fits into hand discretely. At 71.5mm x 44mm x 14.2mm including the pod, it weighs just 67g including juice. The total mass is pretty small overall and it is certainly one of the smallest pods I’ve tested. 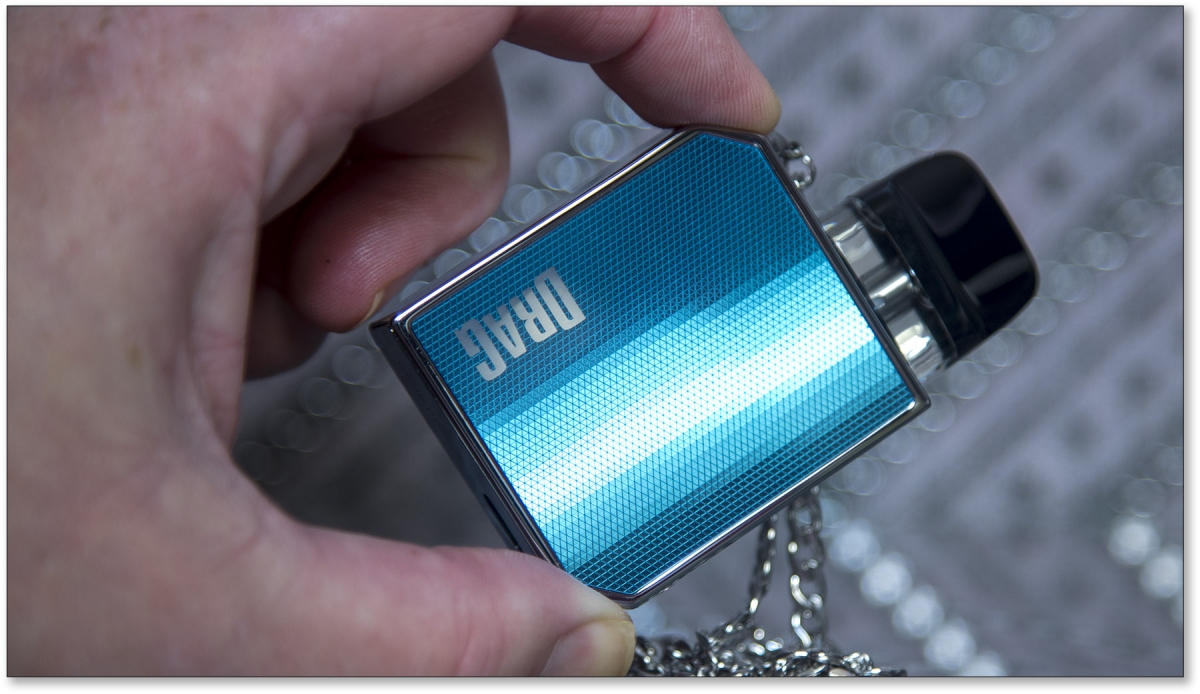 Considering VooPoo have fitted adjustable airflow and a variable power chipset with an 800mAh battery, they did well to keep it so small.

Aww bless! It looks lost without a pod fitted. VooPoo give you two different mesh pods in the box, a 1.2ohm and a 0.8ohm, both appear to have a leak resistant structure in the base which is hidden once fitted.

The pre-fitted pod has a safety seal which needs removing. Unusually the pod is a press fit rather than magnetic, but this turned out to be the secret of its airflow success (more on that later). The fit is secure with no play at all, though it is in firm it still pulls out easily when required.

The pods are top-fill so you don’t need to remove them to top up. The mouthpiece is a flip-top by levering it over to one side until it unclips, there a little silicone bung on top which needs to be pulled open. 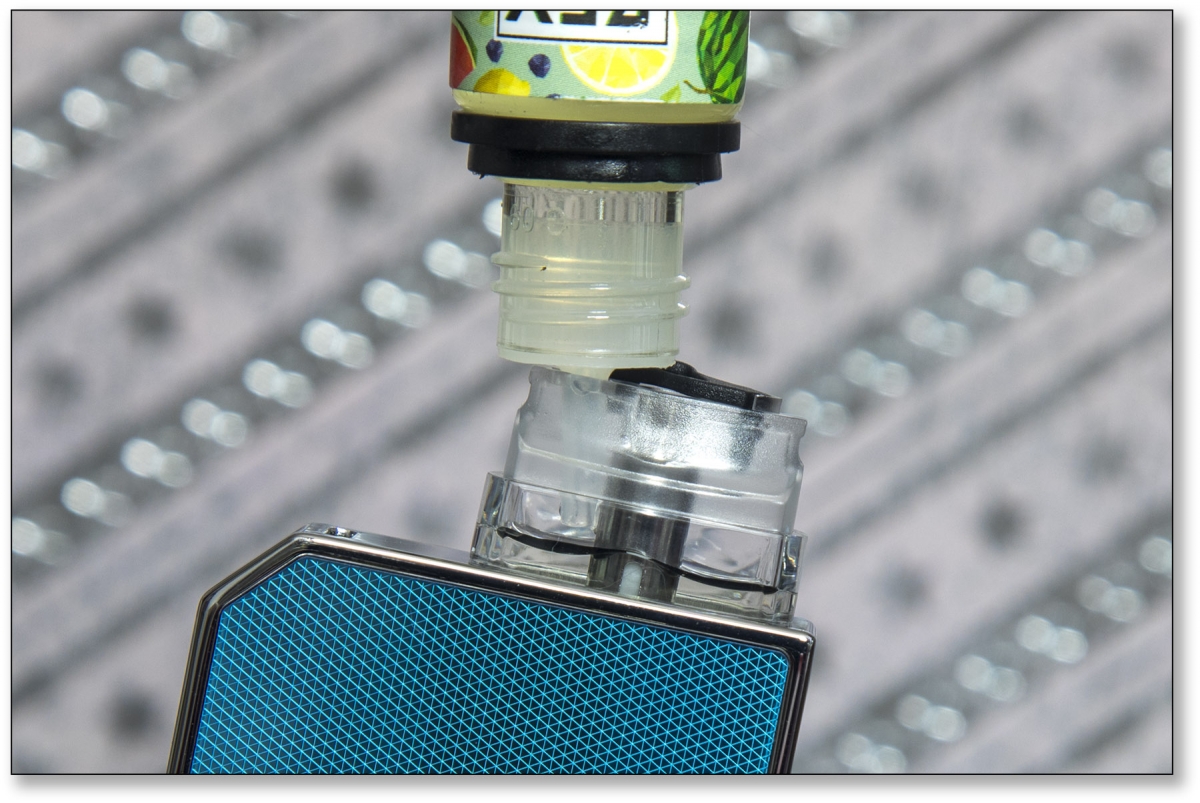 The filling hole is large enough to get most bottle tips in and there is enough room to prevent airlocks. I found I could fill it right up with zero spillage. Once filled, replace the bung and press fit the mouthpiece back on. Don't forget to leave the filled pod to prime for 5-7 minutes the first time you use it.

Pleasingly the Nano 2 has three adjustable power settings which are achieved by the little adjustment button on the side:

The battery status is shown with three LED lights which decrease as the battery drains.

The adjustable airflow is often the downfall of many pods but VooPoo have nailed it on this one! I was more than impressed with how tight you could get the draw I like it tight (who doesn’t?) but it closed off tighter than I prefer and easily found my sweet-spot, the slider is a little fiddly to adjust as it’s quite stiff but that means it also stays exactly where you set it.

I must admit I was praying the Drag Nano 2 vaped as good as it looked, if not the disappointment would have been unbearable. Fortunately it vaped like a MTL dream right off the bat. The draw was smooth, the flavour easily matched the best coils I’ve tried and are much better than the MTL PnP coils. The auto-draw was instant and responsive, I started with the 0.8ohm pod which will be the most power hungry, and the vape was a nice, warmish temperature and never got hot or spitty.

I moved onto the 1.2ohm pod, this will be my go-to pod for this device as I’m getting great flavour and it uses a third less power so the 800mAh battery will last longer. I would say the 0.8ohm is better relative to the power so if battery life is less important to you then this might be your choice.

I have encountered zero leaking issues and no condensation either, the pods have lasted much longer than the PnP 1.2ohm ones which is a huge pro for me.

Battery life is decent even with the 0.8ohm pod which lasted me around 5 hours of exclusive use, and the 1.2ohm lasted me over 6 hours. After initial testing, I tended to top up charge during periods where I wasn’t vaping, a full charge from low took over an hour though as it’s 1amp charging. 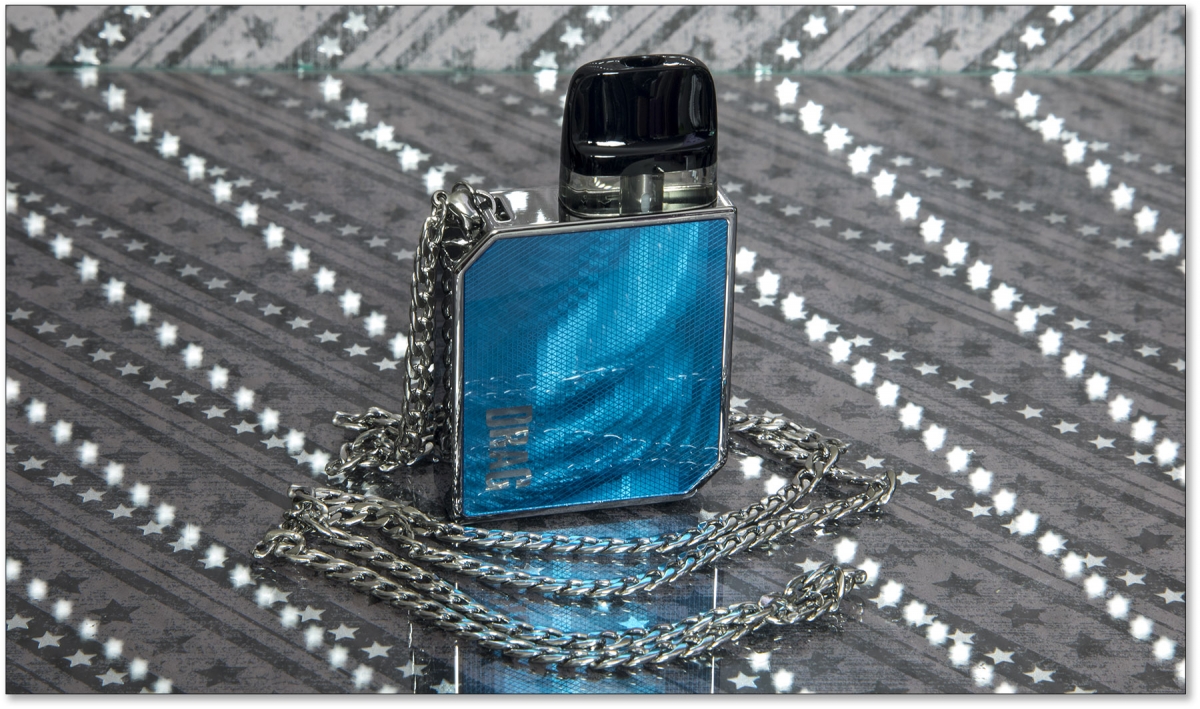 VooPoo include a rather nice chain lanyard which hooks onto the top corner, it was a little fiddly to fit at first but I found it easier to clasp the chain together first then hook it through from the lower side. Once fitted, it suits this little beauty perfectly as it’s classy and not one of those loud shouty ribbons we often see.

The length is perfect and sits just above your stomach and easy to grab, I found the length particularly useful when driving etc. as it was always easily within reach.

The Drag Nano 2 is near perfection, I couldn’t pick a fault if I tried. It looks the mutts nuts, the size is great and most importantly, the vape is sublime. You would think I would be bored of pods by now, but when something like this comes along it shows there’s always improvements than can be found.

VooPoo’s designers must be proud of this one and rightly so. It reminds me a bit of the Joyetech Obliq in style, but the airflow is much better and more compact. The nearest in size is the KoKo Prime, but this is much better. 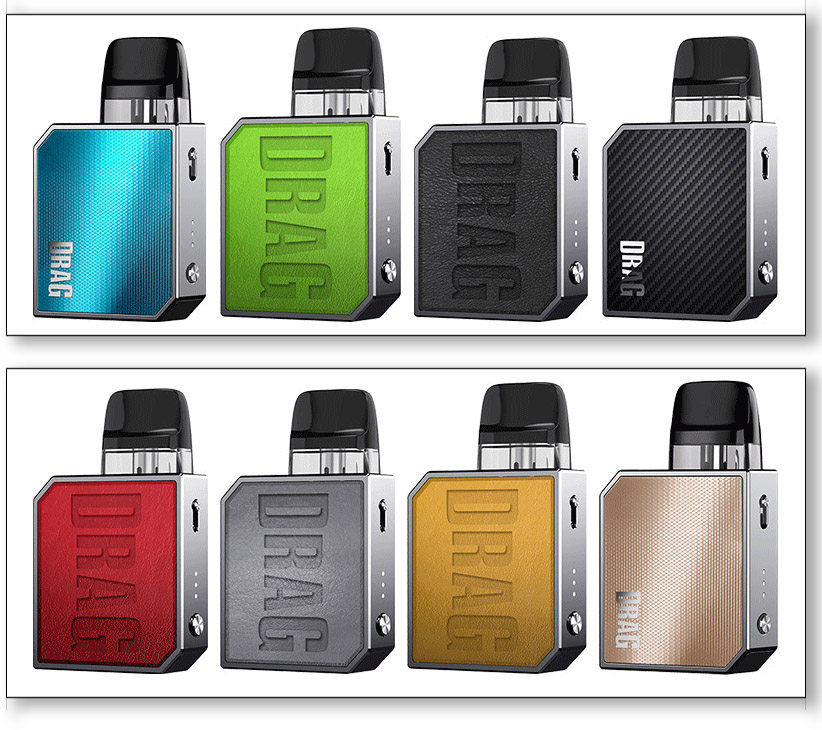 The Drag Nano 2 is in my top 3 pods of 2021 and is a contender for No1. I can think of at least three pods that this will replace, and it’s going to be hard not to buy myself another.