I received a surprise package from Vaporesso the other day containing their latest entry in the starter mouth to lung kit category, the Zero 2 pod kit. This is the follow up to the Renova Zero that was released all the way back in 2018, so I was more than a little surprised to see the Zero brand receiving an update after such a long time, with the main updates being increased pod capacity and a larger battery. 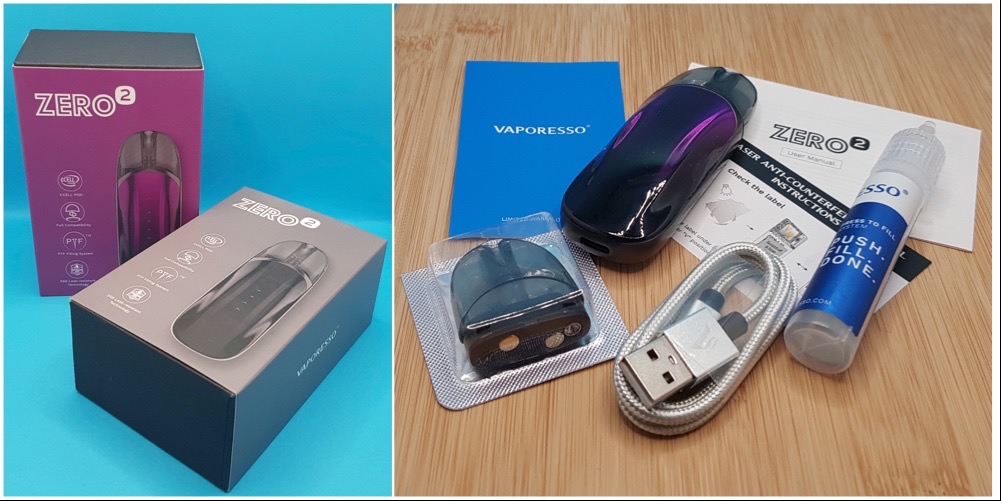 The Zero 2 is available in six colours, and I was sent the “black purple” and “black” for review. These come in natty colour coordinated boxes so you can instantly see which colour you’re buying. Inside the box, besides the Zero 2 itself, you’ll find two pods, a USB-C charge cable, an empty 10ml bottle, plus the usual paperwork. 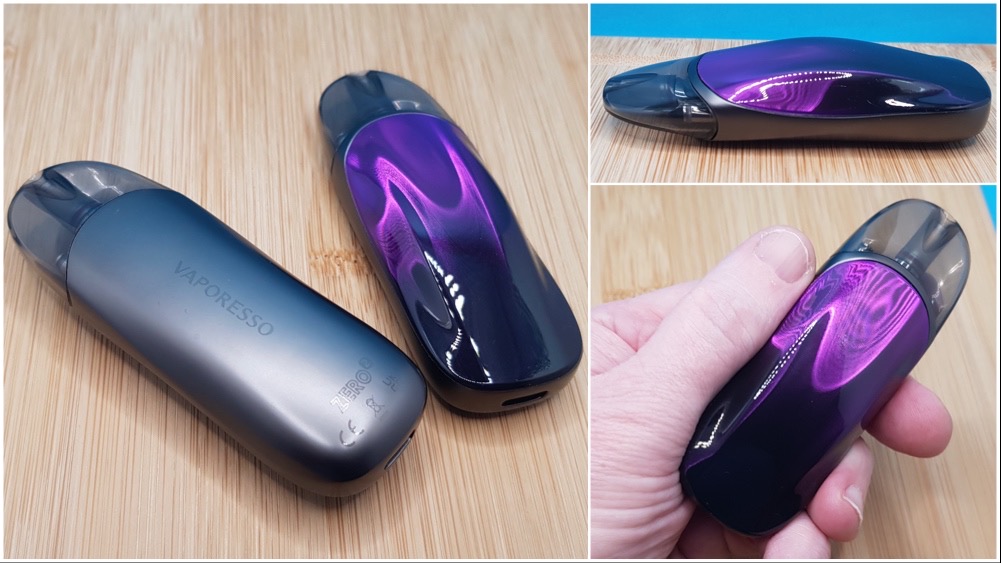 The Zero 2 has a rather unique curved shape which sits perfectly in the crook of your thumb and makes it very comfortable to hold, this is all finished in a 10 layer IML finish which changes appearance as you play with it in the light (but also makes it a nightmare to photograph!). The back of the device is much flatter with a gunmetal grey finish and minimal Vaporesso branding. I’m not normally one for purple mods, but the finish on the “black purple” Zero 2 won me over and this is the one I ended up using the most, the “black” one has a more dark grey finish on top and looks equally good though. 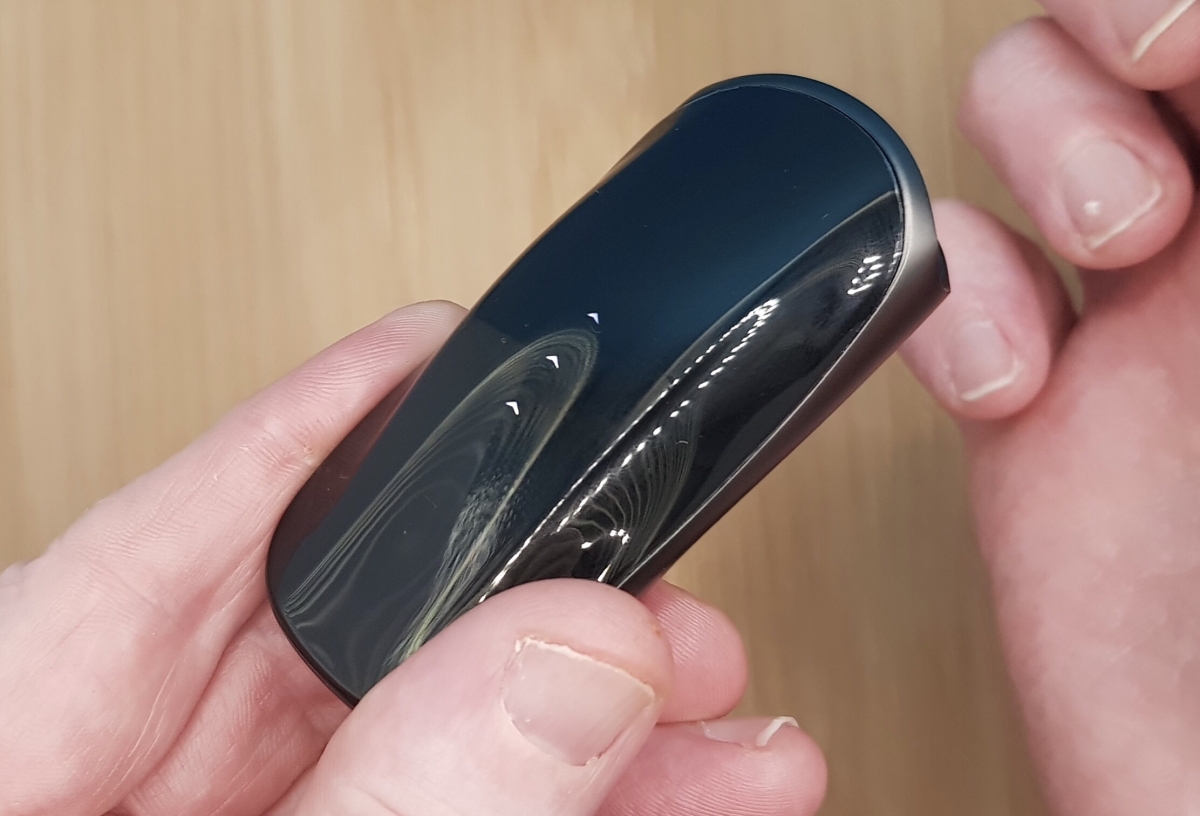 There are four LED indicators embedded in the top layer to show your battery charge level and various error codes. These use what Vaporesso describe as a “Dynamic Tidal Light” in use which pulses the four LEDs when you take a puff, this extends around the outer edge of the frame where the gunmetal chassis and coloured IML layers meet which can be a little distracting in lower light settings.

The four LEDs are also supposed to act as a real time battery indicator, but I soon discovered that this wasn’t the case, it’s so busy doing its mini disco thing that this doesn’t actually work as advertised, and in order to see your battery charge level you have to remove the pod and reinsert it. This actually caught me out on one occasion until I realised this and I ended up with a completely discharged battery when I thought the Zero 2 was fully charged, naughty Vaporesso!

Charging is done by the USB-C port on the bottom of the Zero 2 with a claimed 1 amp charge rate and 800mah capacity which is a big upgrade from the 650mah capacity found on the original Renova Zero. In my test, it hit a peak charge rate of 0.95 amps with a total recorded capacity of 775 mAh in one hour and eight minutes which is quite a bit longer than the claimed 45 minute charge cycle but is still perfectly acceptable. 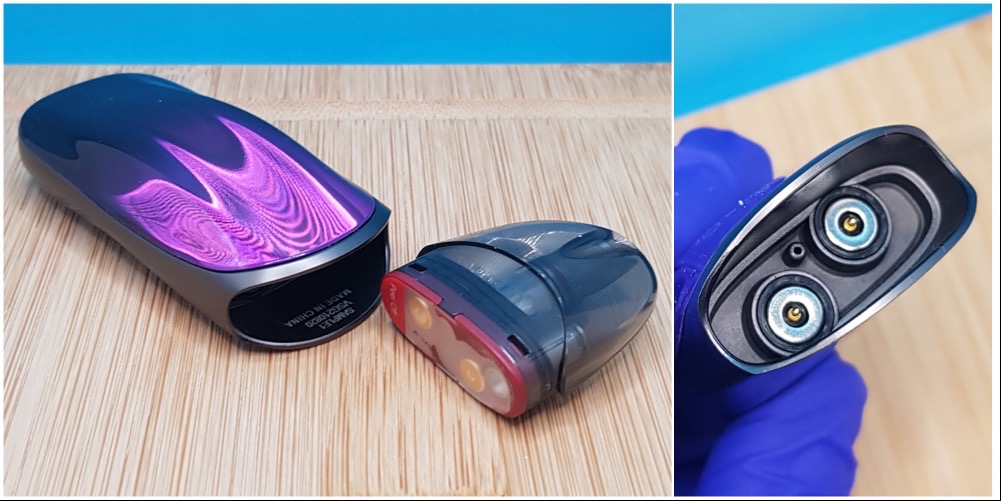 Pods are inserted from the top as you might expect, and are held in place by magnets. These are strong enough that the Zero 2 was easily able to pass the shake test so you shouldn’t have any issues with pods going missing. The pod recess also houses a draw activation tube in between the contacts and this has worked flawlessly throughout my time with the Zero 2. 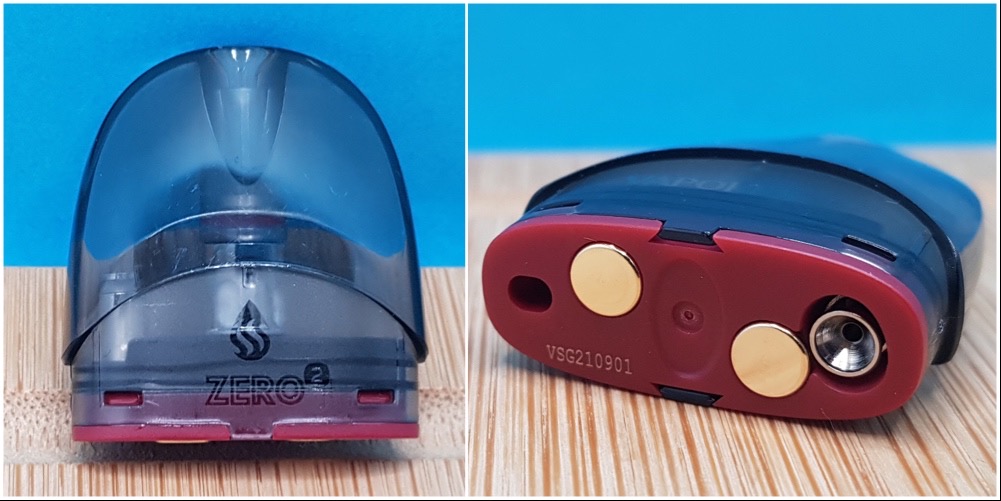 The Zero 2 uses refillable pods using Vaporesso's push to fill system (PTF) which they’ve employed on several of their products before, this works quite well and filling is easy just so long as you remember to apply downward pressure on the valve whilst filling. I was sent the international version for testing and these updated pods have a 3ml capacity, however the TPD versions will still be 2ml as you might expect. One big plus point here is that the pods are compatible with the older Renova Zero as well, but one thing that may not be too popular with the recent rumblings on the forum about disposables and waste in the e-cigarette world is the pods don’t feature a replaceable coil system and are discarded once the coil burns out. Pods also employ the Vaporesso “SSS” tech (Seal, Saturate, Store) which means you should have a mess free experience, and I’ve not encountered any leaking or condensation in use.

Two pod types are available: a 1.3ohm CCell with a round wire coil embedded in a ceramic core and a 1.0ohm mesh coil, both are vertical coils. I found the 1.3ohm coil had a slightly tighter draw but had a bit of a tendency to flood, and I preferred the slightly looser (but still tight) draw and flavour from the 1.0ohm mesh coil. Some might decry the lack of adjustable power levels found on the Renova Zero, but I found the vape to be consistent throughout the battery life.

Coil material isn’t stated on either coil, I was able to find information on the CCell coil from the earlier Renova Zero pods and these use a Nichrome coil so I suspect the same applies here. I couldn’t find anything at all about the mesh pod other than it’s “mesh” so I pulled one apart, the coil is magnetic which means it’s probably Kanthal so this will obviously be the best choice if you’re nickel sensitive.

The Vaporesso Zero 2 is a worthy successor to the now ancient (by vaping standards) Renova Zero, and the increased pod capacity and bigger battery are both welcome additions alongside the backward compatibility with earlier pods. The finish on the IML panels is stunning and it’s very pocketable at just 63 grams when you want something more compact to use whilst you’re out and about.

Many thanks to Vaporesso for sending the Zero 2 out for review. 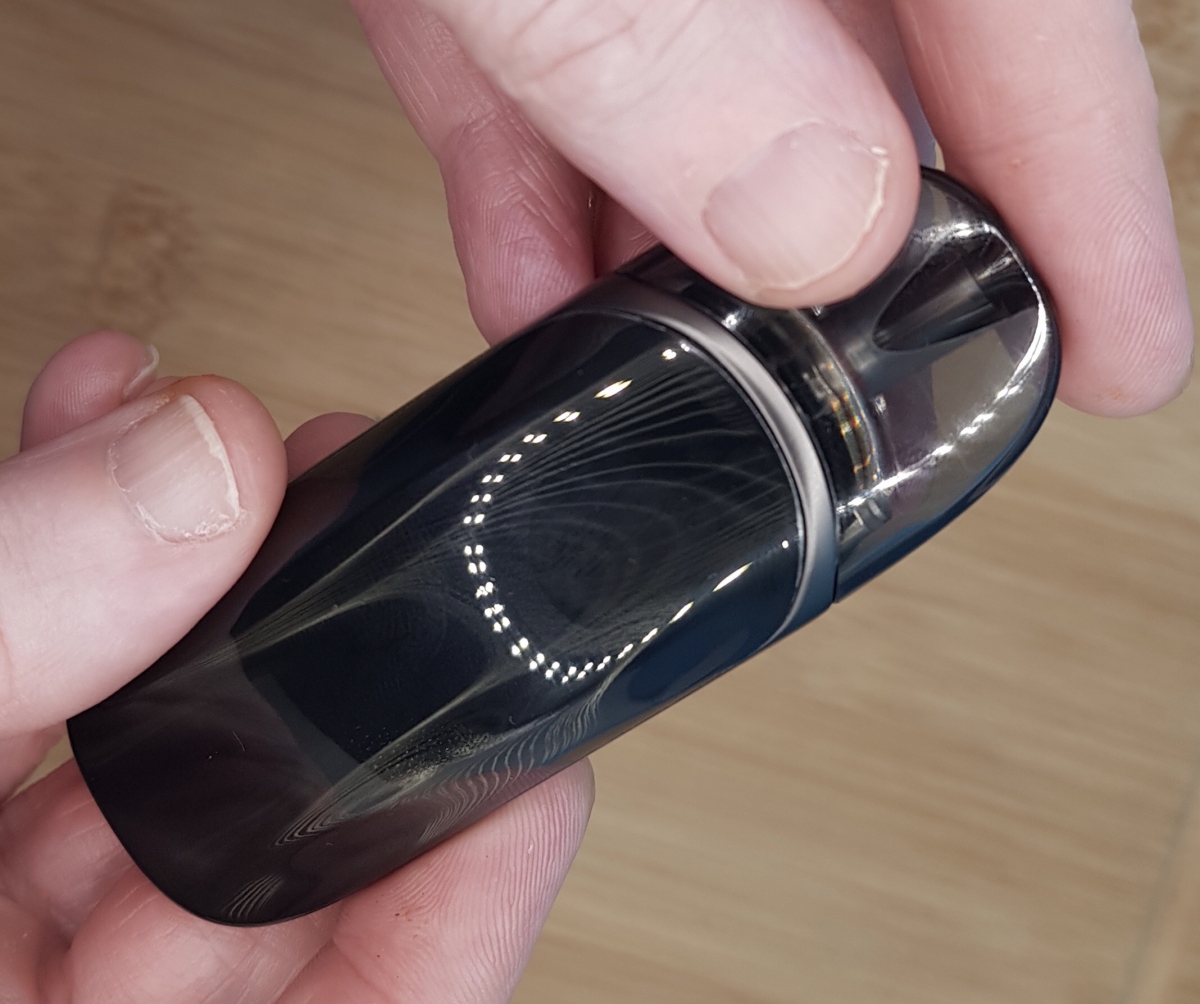