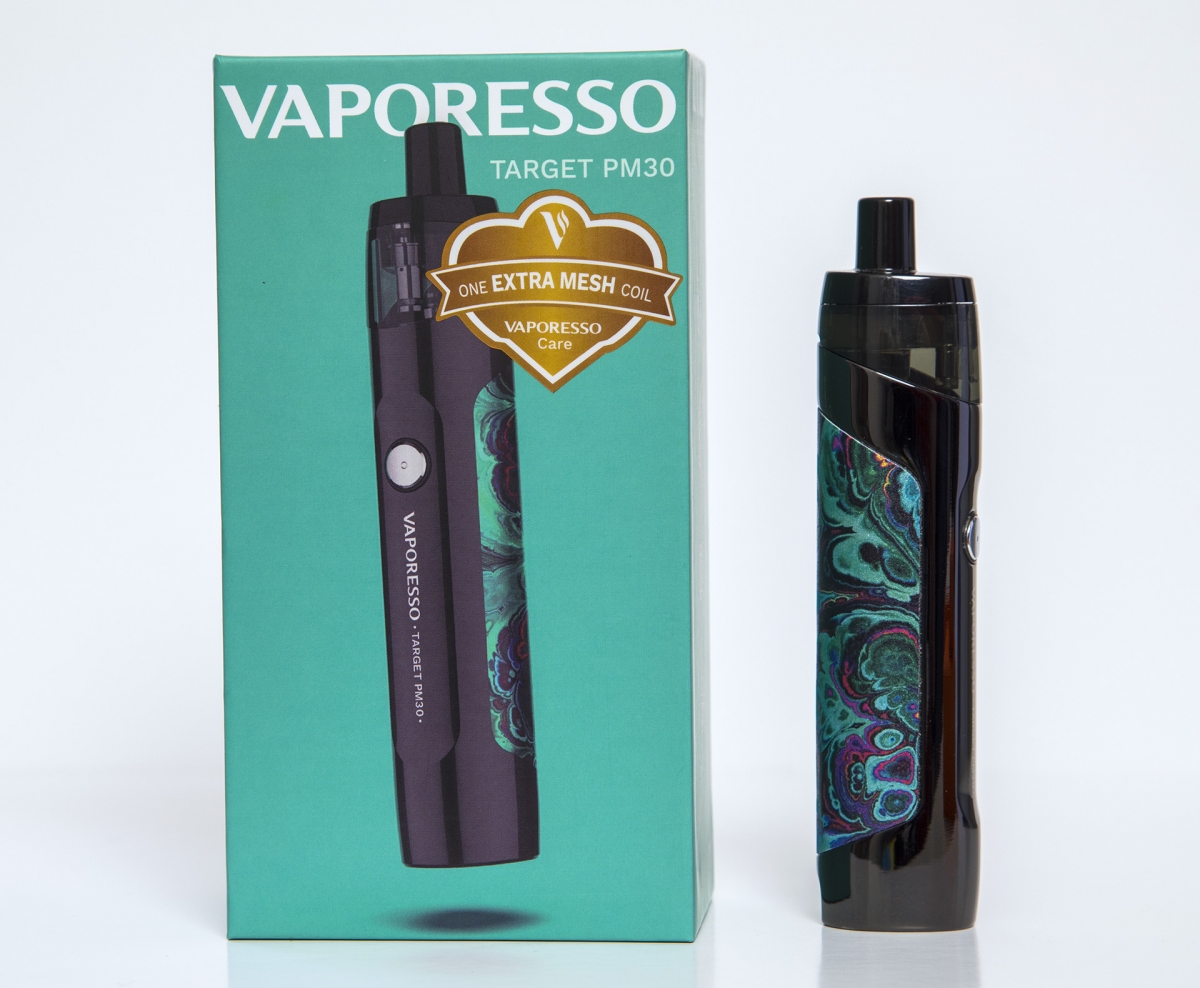 Vaporesso have to be the most prolific manufacturer of 2020 so far, kicking off the year with the amazing Target PM80 and some superb MTL Pods, they are on a roll for sure, so I was very keen to test the new Target PM30 which was aimed as a Mouth To Lung (MTL) Pod/Mod. Did it meet my picky expectations? Yes, No, erm…. Almost! Read on for more……

Here’s Vaporesso’s spiel:
"Introducing TARGET PM30 based on the latest GTX coil platform, bringing you even more convenience as well as a huge leap in flavor production. A built-in battery gives all day long usage time, plus adding Type-C charging cable makes recharging easier. By keeping the patented slide and PTF system on top, refilling will be both mess-free and simple. Meet a wonderful vaping experience on the TARGET PM30."

A few of the highlights of the PM30 are:

The PM30 comes in quality packaging as we’ve come to expect from Vaporesso, stylish contemporary design and a sturdy box. There’s plenty of goodies inside the box: 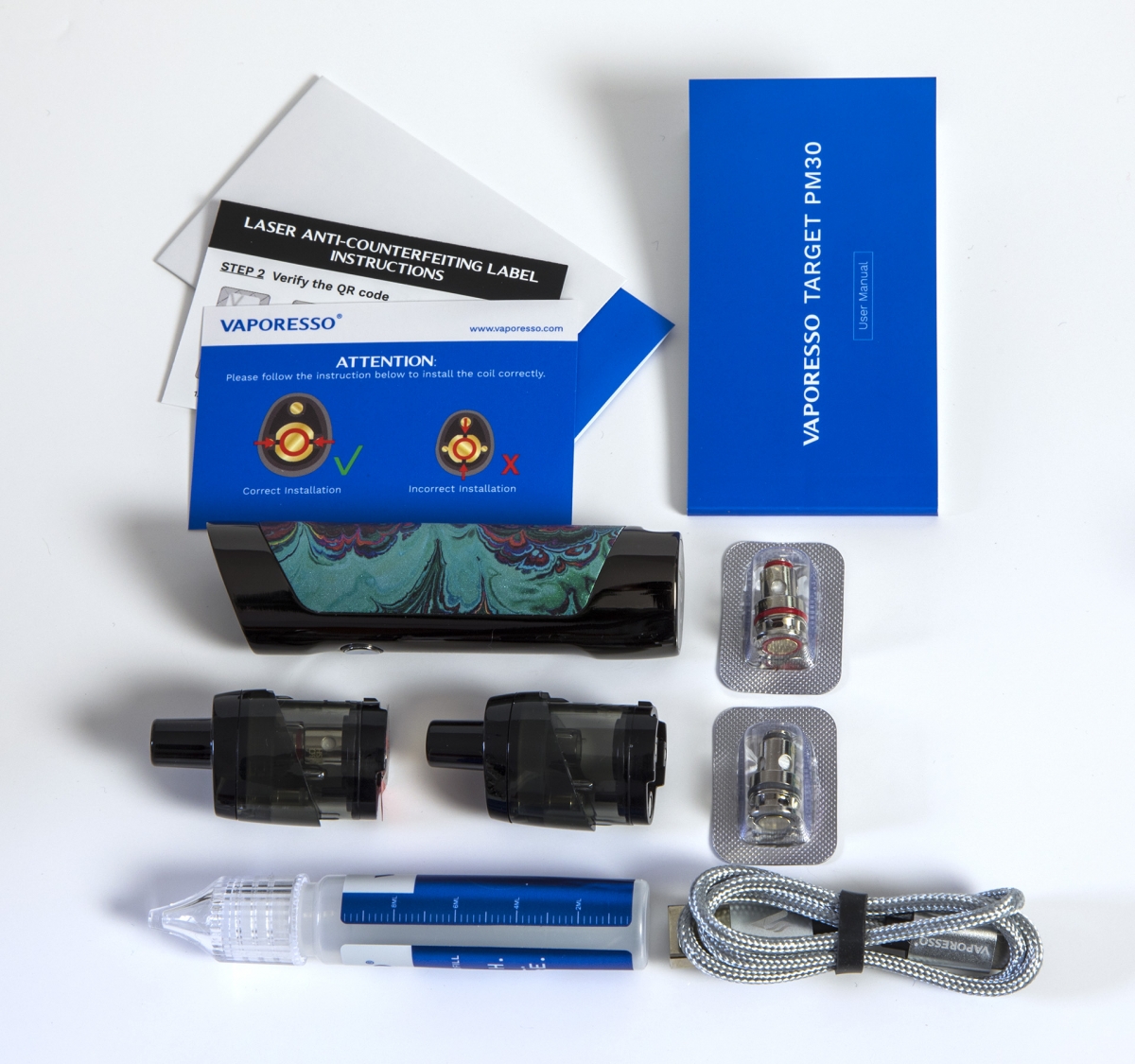 I love how Vaporesso give you two pods as they come in very handy if you want two different coils/juices on the go. I have ended up carrying the second pod prefilled when I’m out and about and fancy a change.

Also included in my pack was a bonus 1.2Ω Mesh GTX coil. This is a brand new coil and an alternative to the 1.2Ω regular coil. I have had a search around the web and it appears that this is included in all the packs I have seen for sale.

Also included is a natty little 10ml refill bottle, I was curious as to why this was included? More on this later.

The first thing I had to get over is THIS IS NOT A PM80 for MTL. I need to get this out of the way as my expectations half expected it to be at least similar, instead it is a screen-less basic function ‘bypass’ style pod/mod with PM styling. This is not a bad thing at all, just very different to the PM80 in functionality.

The PM30 is quite tall in the hand but very comfortable, the shape is very ergonomic and offers different firing positions. The only button is the firing button which also acts as the power adjustment and on/off function.

The pod is also different to the PM80, smaller but with the new PTF top filling system so you don’t need to remove the pod to refill it. It also has a sliding top cap which reveals the filling port.

Vaporesso hit the nail on the head with the new PM series styling. It has its own unique look and feel with the textured resin styled wrap on the all metal chassis which is plated in gun metal (chrome also available). The pod is dark plastic which looks good, but it is harder to view your juice level to the point where you need to remove the pod to see it properly. Branding is subtle and stylish, a small ‘V’ logo above the usb-C port, and the name is printed along the fire button side recess. The small round fire button slightly protrudes and has an LED ring light around it. 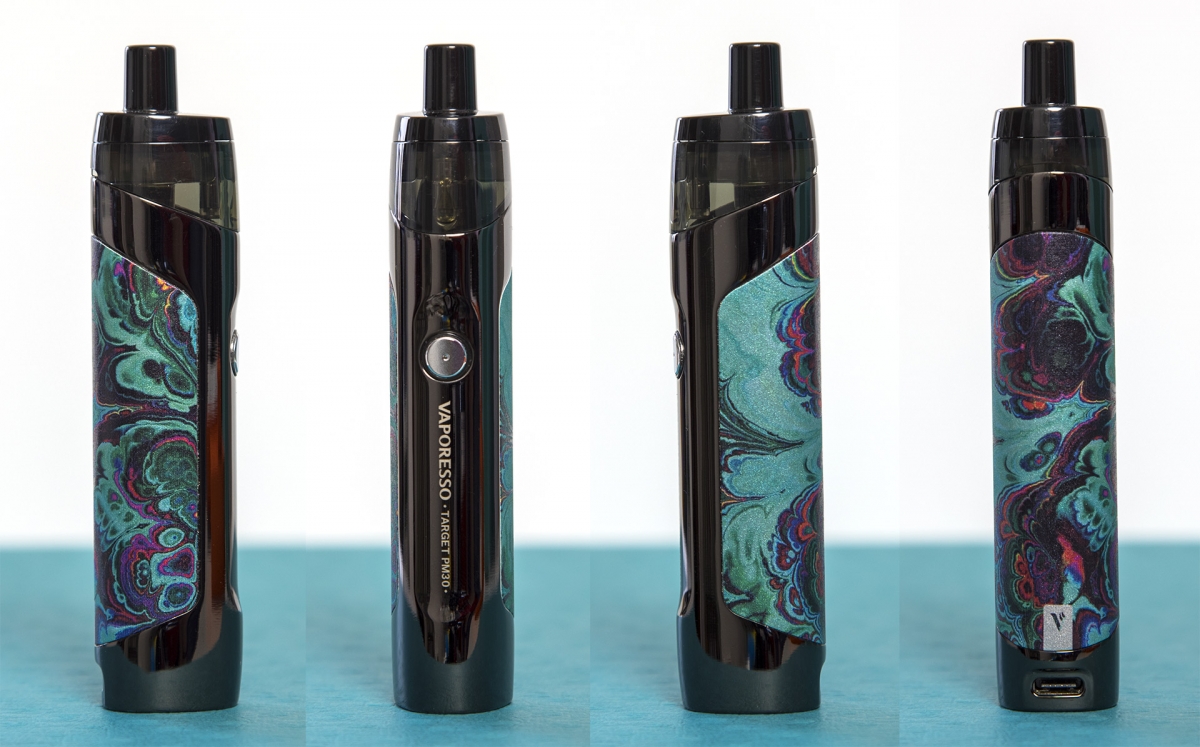 As a part of Vaporesso’s PM (Pod Mod) range, the styling is very similar to the PM80. Comparing the two you can see the family resemblance but with the obvious omission of the screen and controls. 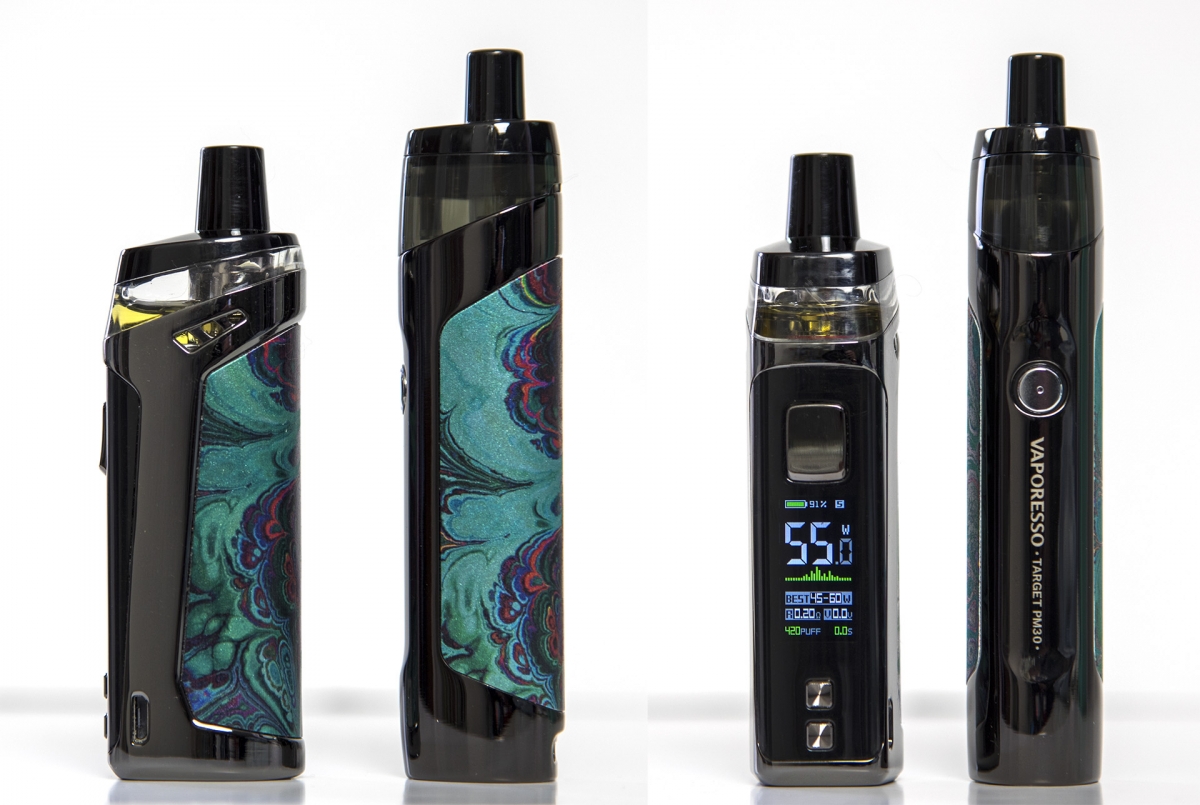 All Vaporesso’s new GTX range of coils fit the PM30. The included coils are the 0.6Ω mesh and the 1.2Ω regular wire. Additionally, the latest 1.2Ω Mesh coil has been supplied in the box though I am not certain if this will be included in future releases?

The flax cotton Vaporesso use in their GTX coil series makes a huge difference in the flavour delivery. I have tried all of the above and the RBA is good, but you simply cannot achieve the same level of flavour that the stock coils give. It’s great to see Vaporesso are using these coils in a variety of devices. So far the ones I am aware of are:

There may be more, but it is already great that you can interchange between devices

The available battery power status is shown using the same light sequence. Charging is via the usb-C cable, though oddly it is 1 Amp charging. The charging time is pretty quick, under one hour from red.

To vape, simply press the fire button. Firing is instant and the difference is noticeable between the wattage settings. I found LOW too mild and pretty much use HIGH for all coils, but this is down to personal preferences as I prefer a warm vape.

As mentioned earlier the pod is darker than the PM80 which is a shame as they got it perfect with the clear plastic. Filling is also different, using Vaporesso’s PTF (Push To Fill) system and sliding top cap which means you don’t need to remove the pod to refill it. Initially I found this a bit tricky with my 10ml nic salt bottle as the nib bent due to the amount of force required and that’s when I realised what the included 10ml empty bottle was for as it has a far more stable nib on it.

This seemed counterintuitive to me. Why empty a 10ml bottle into a 10ml bottle to make it easier to refill? I guess it comes in handy for larger 50/100ml shortfill bottles. To be fair, the PTF valve did loosen after a few operations and I am having less of an issue now, though the dark pod still makes it a little tricky to fill and I found I overfilled it a few times. A clear pod would have made it a lot better. 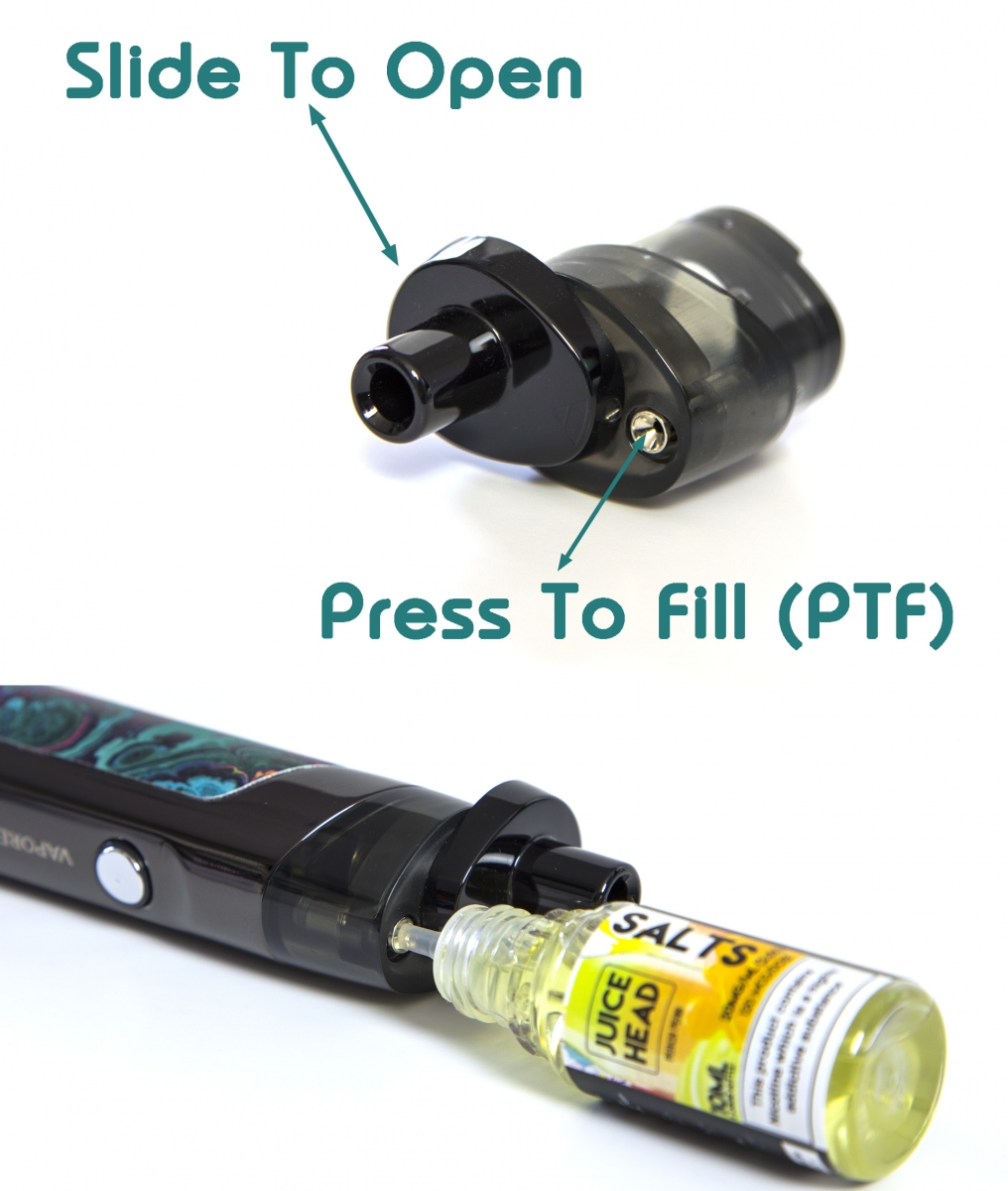 Fitting coils is super easy as long as you pay attention that the flats are lined up on the base. They simply press fit into place. It’s best to prime the coil prior to fitting with a few drops of eliquid into the bore as it speeds up wicking of a new coil.

The pod is held in place with three strong magnets and it is very secure with zero play and is very unlikely to come loose in your pocket or bag. It is nice to see that there is a recess in the base of the pod housing of the mod for leak protection. 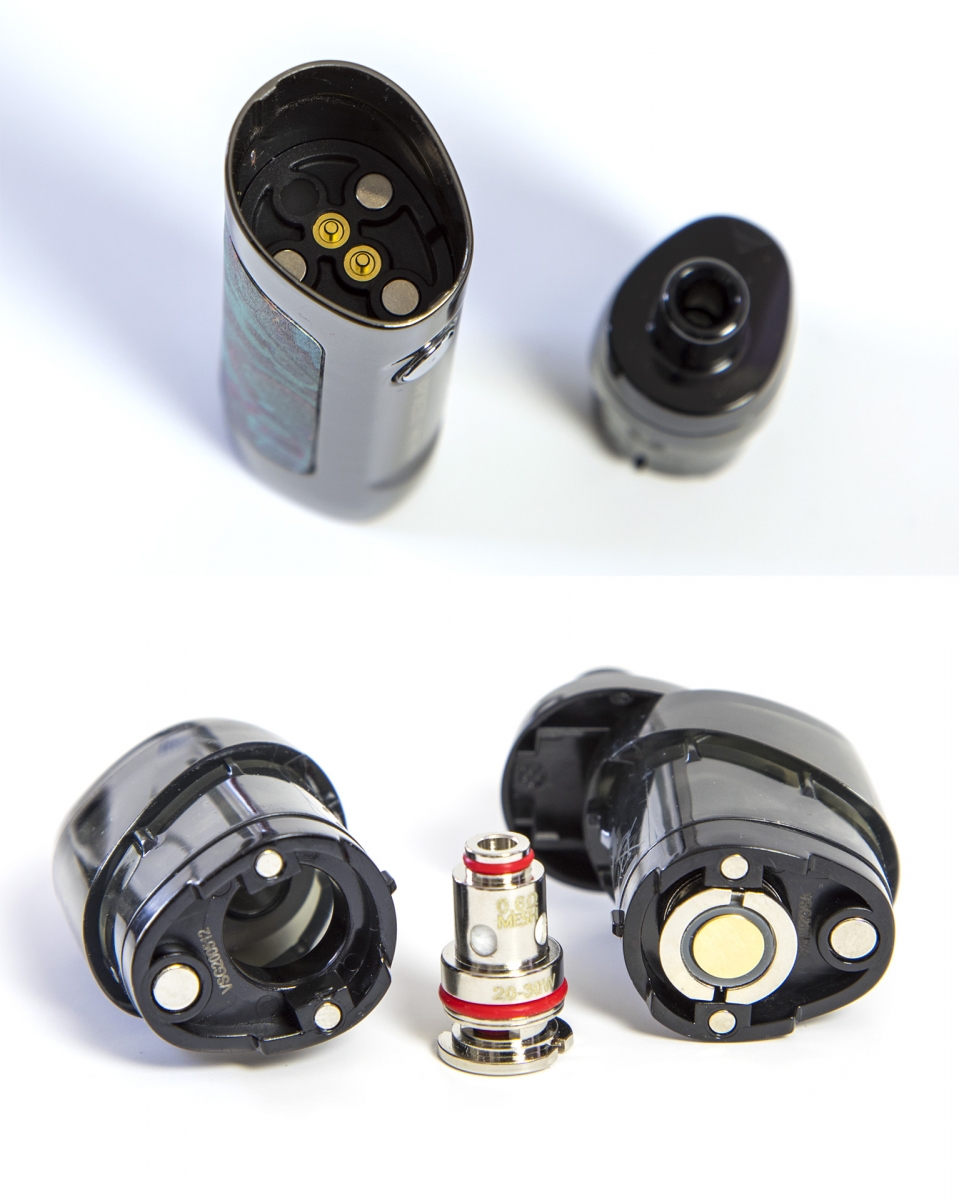 So far it is all pretty good, but how does it vape?
Well it is a mixed bag with a split personality. Being that it appears to be aimed at MTL, it falls short in my opinion. The draw is a very loose MTL due to its fixed airflow, and the mouthpiece is quite wide bore. For those two reasons, the PM30 just doesn’t fit for my MTL preferences. However, the flavour is superb. For the sake of a fair review, I continued to use the 1.2Ω mesh and regular coils purely for MTL. I have had a few loose draw pods and you kind of get used to it, I didn’t hate it but it is far from my desired MTL vape.

DTL (Direct To Lung) wise, things got better, in fact a lot better!
I popped in the 0.6Ω mesh coil and took it for a spin. The draw is a fairly restrictive DTL, but not too restrictive and very close to how I would set the airflow and the flavour really popped! I much preferred the PM30 in this configuration. In fact I accidentally found a perfect setup for my much loved 6mg Manabush juices, giving great flavour and a decent throat hit.

The thing is, I would neither class the PM30 as a MTL nor a DTL but somewhere in between, if you get my drift? As it turns out, I have ended up using it far more than I initially thought. I am now DMTL-ing my Manabush juices while getting a decent nic-throat hit at 6mg DTL, but can switch to MTL in social circumstances where ‘big clouds’ aren’t welcome, which is a great compromise and something I am finding very useful.

I have also used 3mg thicker 70VG/30PG juice for DTL using the 0.6Ω coil, the flavour is superb and the clouds are surprisingly huge, though I find the draw more noticeably restrictive using thicker juice. It keeps up nicely and I have had no dry hits at all using either coil.

The PM30 is an odd one for me. My first impressions upon vaping on it MTL were not good, but upon testing it for DTL I found it far more pleasing. The GTX mesh coils had a lot to do with that as they are one of the most flavourful stock coils I have used. Despite my expectations of getting a MTL version of the amazing PM80, I ended up with a cracking in-between setup for restrictive DTL.

As for the device itself, it’s quite limited in functionality but there’s enough for what it is, fire and forget simplicity with a decent battery life. Easy filling on the whole, but the dark pod is another con and a surprise after Vaporesso got it so right on the PM80 pods.

I’m not sure I would buy one due to its split personality, but if you want a restrictive DTL, flavourful and satisfying low power setup then the PM30 does fit the bill.

If you are after a purely MTL tight draw pod/mod then I don’t think the PM30 will satisfy your needs.

It was only as I finished the review that I realised there were far less cons than I expected due to the PM30 being such a little beauty for restrictive DTL, but the main con really is a deal breaker for anyone expecting the PM30 to be their MTL solution. The draw and the mouthpiece just don’t cut it, and Vaporesso marketing it as MTL is the biggest mistake. If they didn’t mention MTL, then the PM30 would have scored better.

STOP PRESS
Anyone looking for a Vaporesso MTL solution then there’s good news, I am currently reviewing the new GTX ONE and loving it – review coming soon
(Spoiler alert – Proper tank with adjustable airflow using GTX coils is a winner in my opinion) 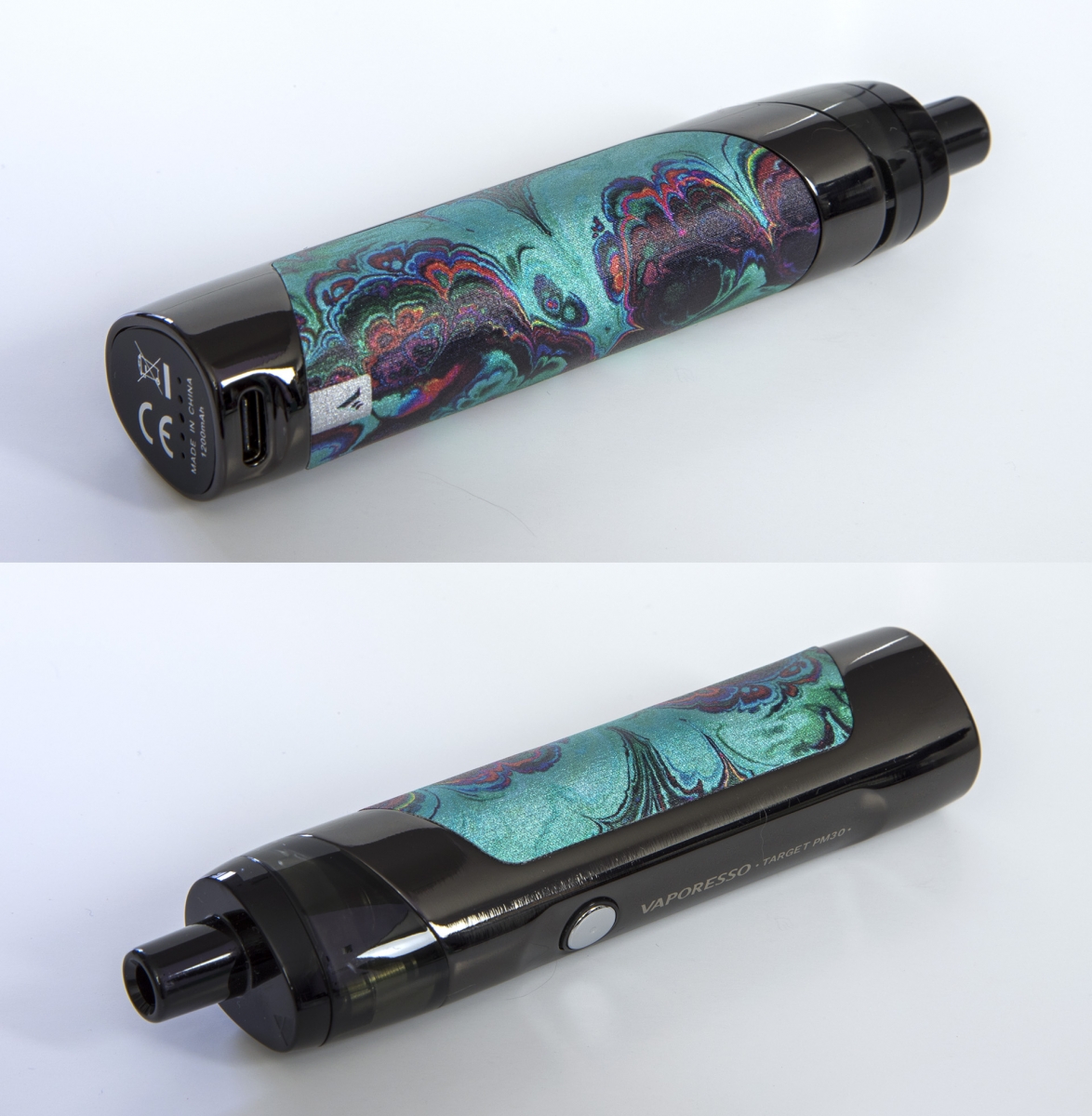