It looks like Vaporesso have reached the end of the alphabet with the Luxe X pod kit. The Luxe line has always had that posh look to it, and the Luxe X also has a futuristic design and bares its soul in the process. 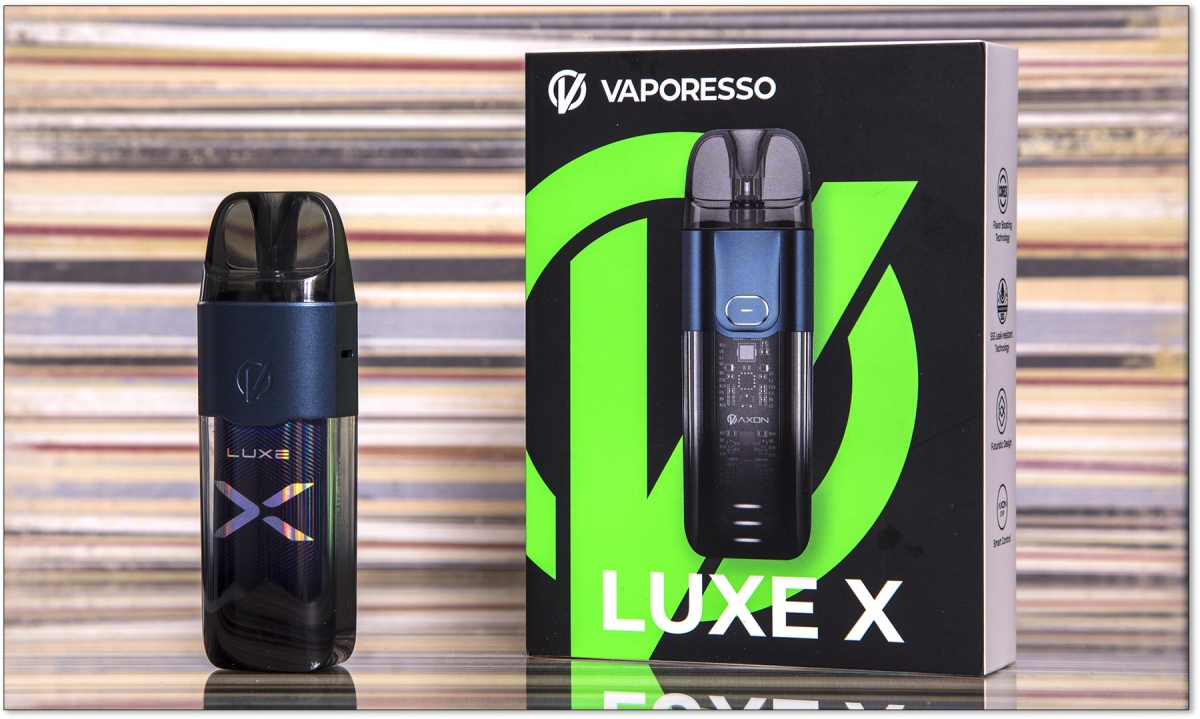 Vaporesso have updated their packaging for the Luxe X with a very vibrant cover which shows your colour choice on the front along with the specs and contents on the rear. With the outer sleeve removed, you’re greeted with the contents.

The Luxe X with a pre-installed 0.4ohm pod is held in place with a white foam insert, and the accessories are underneath a flap on the right-hand side with possibly the smallest manual I have seen from Vaporesso (no tree killing phone book like Smok do). The USB cable is underneath that and the other pod (0.8ohm) is above. 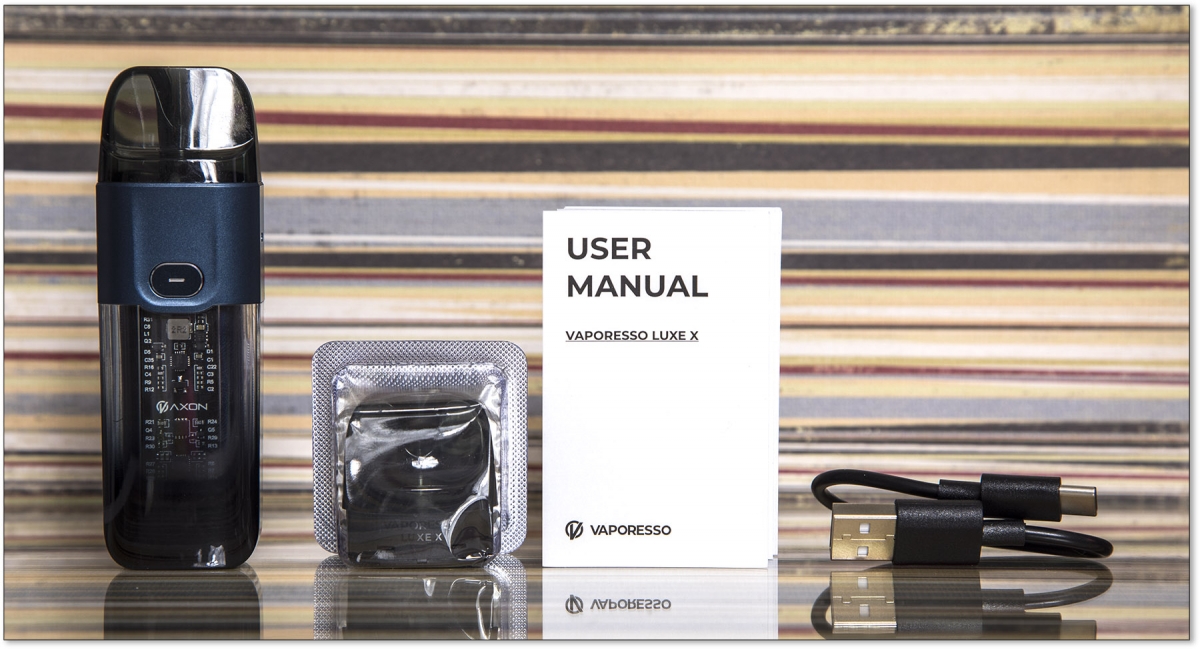 Vaporesso have put their cards on the table within the specs that the Luxe X would be larger than their previous pods with 5ml capacity and a large 1500mAh battery, along with the promise of RDL to MTL, but I was pleasantly surprised that it was still pretty compact, they have crammed a lot into such a compact kit which fits comfortably in your hand.

It has no screen or adjustment buttons, just a single Fire button on the front; I really like the quality of the fire button, firm with a short throw and easy to find in your hand however you hold it, it barely protrudes and I’ve experienced no pocket firing problems to date.

That said, it is still one of the largest pods of this style I’ve seen and usually with specs like these, you start to see them go into the ‘pod/mod’ style, the Luxe X is what I call a proper pod with its basic battery section and removable/refillable pod.

The pod is held in place with four strong magnets and the fitting is spot on with no noticeable wobble; if you force it then it will rock a little but it’s plenty firm enough to stay in place when stored in your pocket or bag.

The USB-C charging port is on the base; Vaporesso have opted for a reasonable and safe 1.5 Amp charging which still charges fairly quick considering the large 1500mAh battery capacity. I tended to top-up charge so I didn’t get an exact time, but it took around 1 hour from a single LED state. 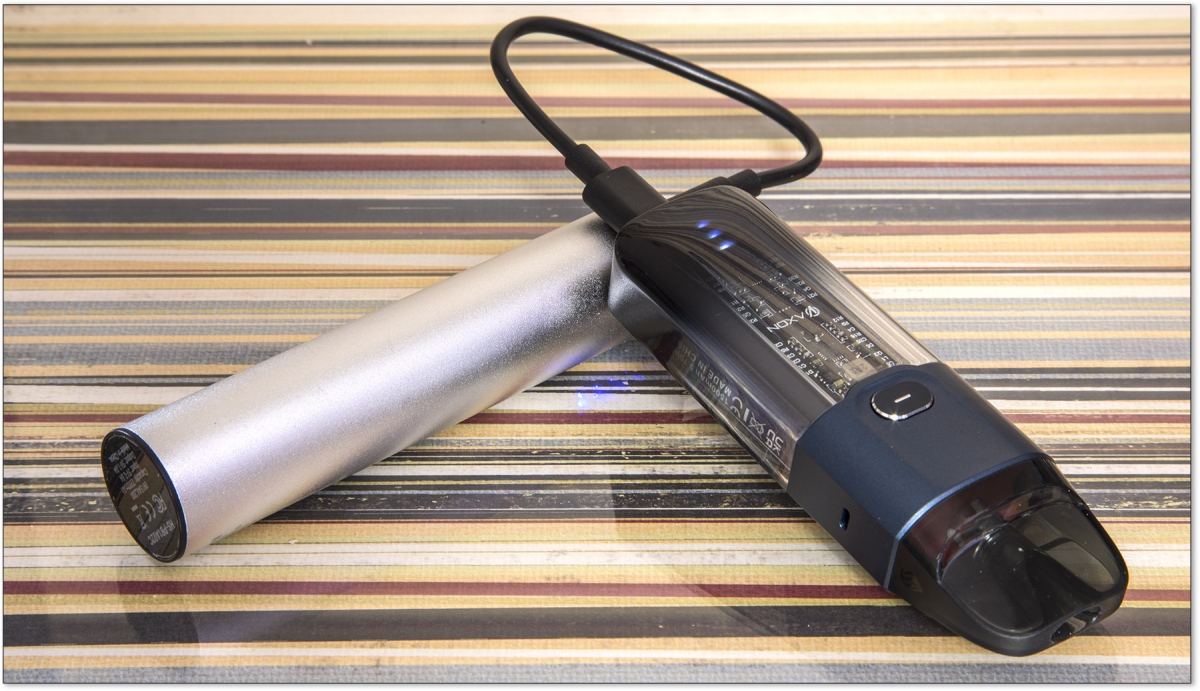 Some might find the included charging cable a bit short but I’m all for smaller cables with kits like this as they are just so much better for power-bank charging plus it’s less of a resource waste as we all have so many of these cables since USB-C has become standard for a lot of devices. 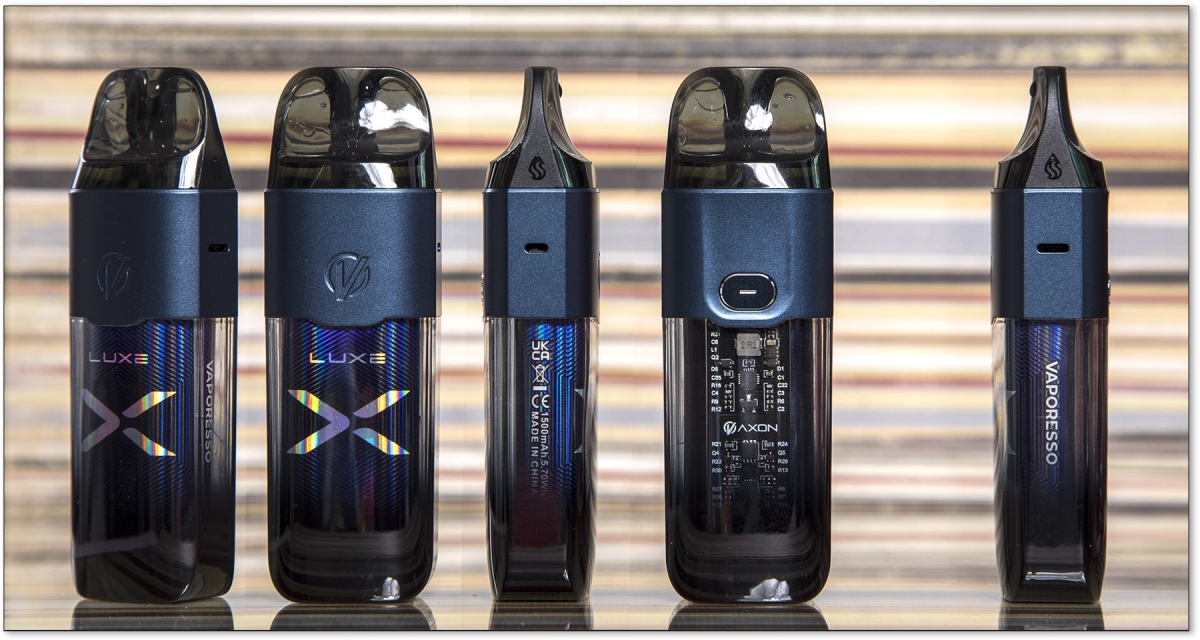 I have gotten this far and not even mentioned the gorgeous styling yet; as you can see, it looks great from pretty much every angle, Vaporesso have done an interesting design with the mixture of metal upper body and the clear polycarbonate base. Vaporesso state it has three layers for clarity, strength and scuff resistance, I am loathed to ruin it by scratch testing but I’ve tried a few hard surface tests and the base hasn’t marked a bit. Feeling adventurous, I then tried rubbing a coin on it to simulate having it in a pocket with coins, no marks to report but I did manage to scratch it with a deliberate scrape on the corner of a coin.

But back to the clear view design, you can see the chipset which has been designed for being seen, and the battery has a really attractive wrap which gives it most of its style, there’s one feature that makes the Luxe X look classy instead of cheap and that’s the fading tint that goes to solid black at the bottom.

One thing I was half expecting didn’t materialise; there’s no flashing lightshow that I’ve seen on many other clear vape kits, you just get three little LED status lights near the base (similar to the Vaporesso ZERO 2 pod), admittedly I do like light-up mods but it would make the Luxe X look a bit tacky so a wise design choice I think. 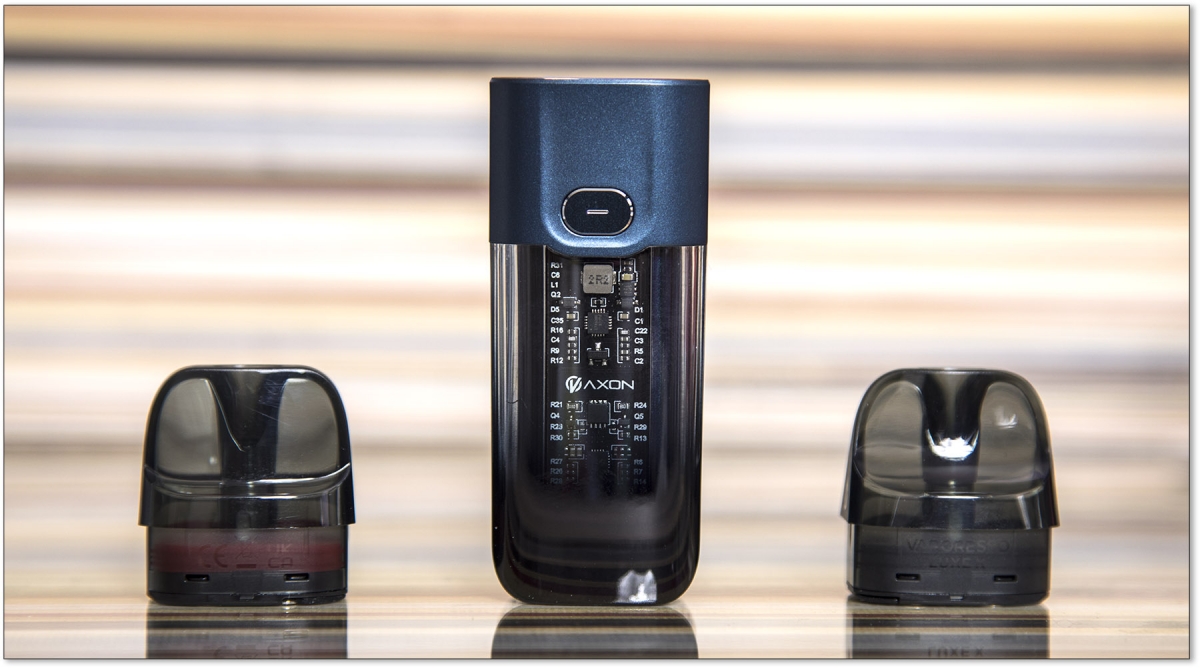 As mentioned earlier, the Luxe X promises RDL to MTL depending on which pod you use. The kit comes with both available pods so you get to try each vaping style.

The ohms are shown on the base of each pod but the 0.4ohm has a red insert so you can easily see the difference. Vaporesso have addressed the main problem with a lot of pod kits and that’s the leaking; using their ‘SSS’ technology which basically is an additional element to divert the airflow inside the pod and capture any stray e-liquid, this has proved very effective on previous devise but don’t bank on it if you intend to store the pod for long periods. But in regular use, it has been faultless.

Vaporesso have taken an unusual approach with the airflow options, rotating the pod is nothing new but there’s a raised platform in the pod housing which limits the airflow, rotate it 180 degrees and it’s unrestricted. I was sceptical if this approach would work but it turned out to be very effective on the 0.8ohm pod, the 0.4ohm was a bit too tight when restricted though. 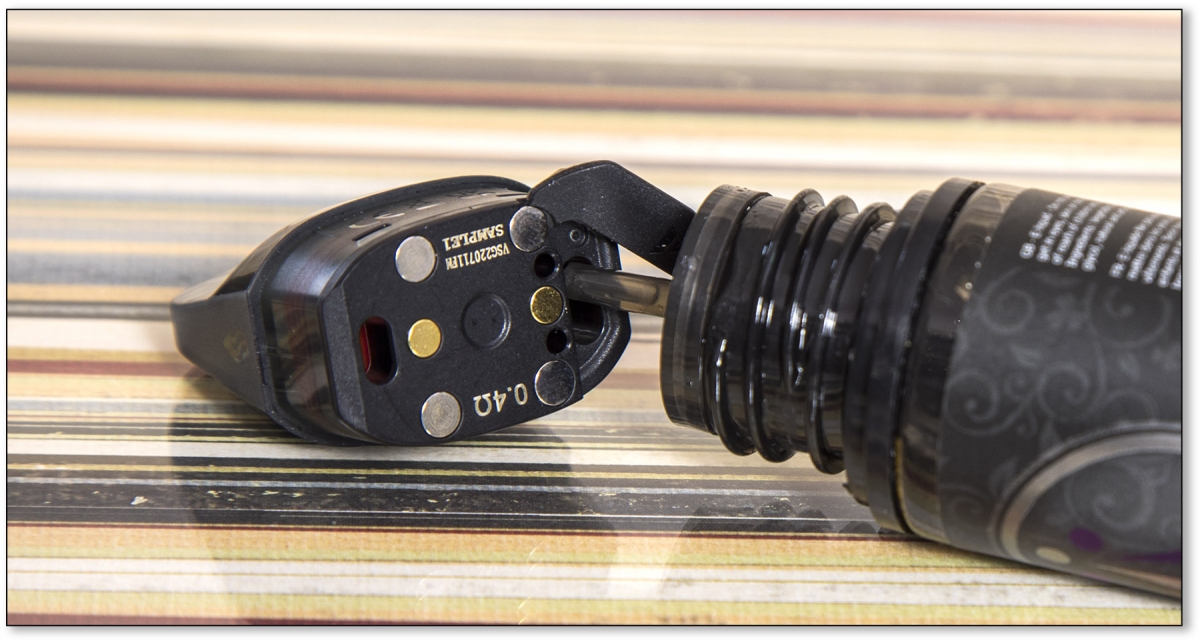 Filling the pod up is achieved via a silicone bung at the very bottom, it isn’t as convenient as top filling pods such as the Luxe Q but I didn’t mind it at all as it was simple enough and there is plenty of room to avoid airlocks or mess, I minded even less as the 5ml capacity means even less refilling.

There’s aren’t any controls to speak of as the Luxe X is as basic as they come, simply a press fire to vape, and there are no adjustable power option, the wattage is set automatically depending on which pod you use.

Surprisingly there’s no ‘auto-draw’ which feels a bit old-school these days, especially for a pod of this style and a bit of a move backwards in Vaporesso’s pod kit range, you tend to see no auto-draw in pod/mods (such as the PM80 etc.) but I’m convinced Vaporesso have chosen this path due to auto-draw being the most common form of failure in so many pod devices, it only takes a bit of e-liquid to work its way inside the draw sensor to prevent it working. I’ve lost so many pod kits due to this reason that I’m glad that the Luxe Q is fire button only which should last much longer.

The lights animate during vaping with a direction motion and only according to your battery level (IE on 2 LEDs pulse at below 60%).

RDL is the difference of breathing through a small straw instead of a loo roll centre if that makes sense? Each to their own and I enjoy each style for their own reasons, MTL is lower power, produces little vapour and tends to use higher nicotine %/mg, DL is more for clouds and since you draw more vapour in )and out) you require a lower nicotine %/mg, RDL is a nice middle ground with a balance between the two and I tend to vape this way when I want to limit the amount of vape clouds (indoors or in public spaces).

That’s not an official guide as I hadn’t intended to cover this but I felt it was helpful to put the performance into context. 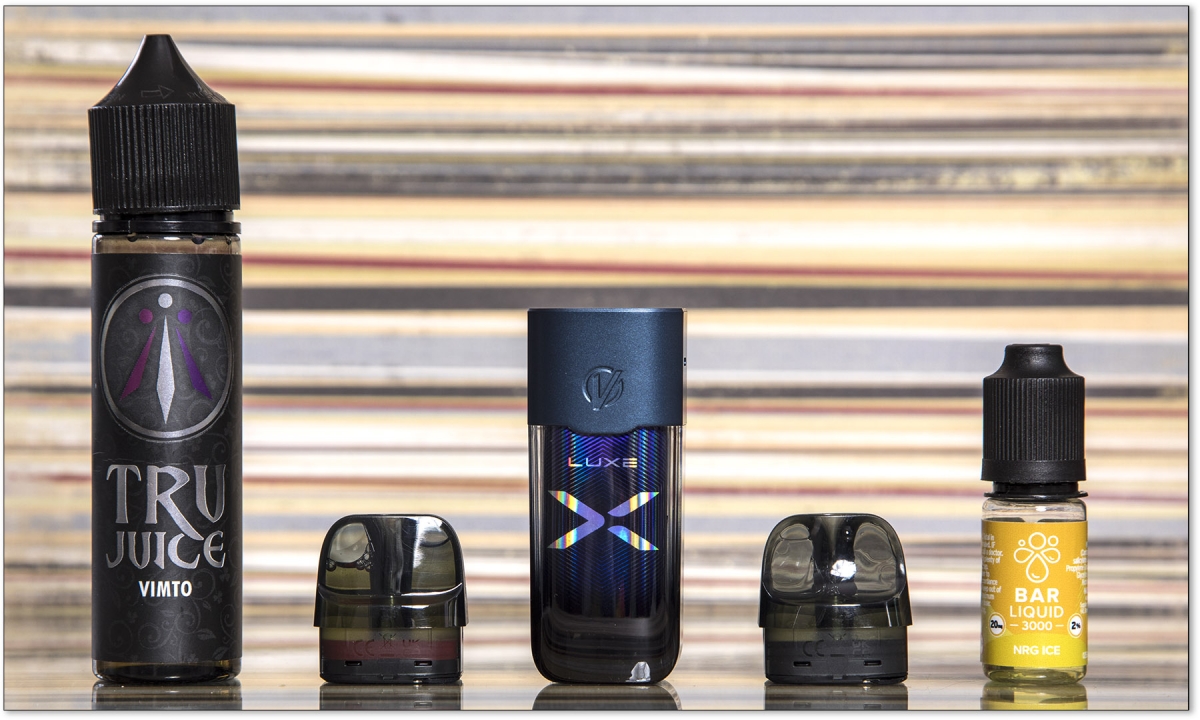 Which e-liquid you use is generally tied to which way you vape, I used 70VG/30PG (thicker and produces more vapour) shortfill with 3mg nicotine for the 0.4ohm pod and 50VG/50PG (thinner with less vapour).

So anyway, back to the performance; the 0.4ohm pod’s flavour was just superb! The draw was too tight for a loose DL but just right for RDL, as in your cheeks pull in when you inhale (not those cheeks!). Vaporesso state the LUXE X delivers 32 watts for this pod and it felt about right, not too warm or cool and the optimal power for a really flavourful vape with reasonable clouds.

I’m used to Vaporesso kits and coils delivering but this felt remarkable and I really enjoyed using this pod, the battery life was decent enough to last 4-6 hours of regular use so I found this a great pocket RDL option for short trips.

The 0.8ohm pod is supposed to be for MTL and I was a little sceptical as usually if you get a good RDL vape you tend to get a too loose MTL in my experience, thankfully I was surprised by how effective the airflow control was; it gave a proper MTL draw in tightness, flavour and warmth, I’m used to such good flavour from Vaporesso’s pods, and the Luxe X was at least on par with something like the ZERO 2 which I found excellent, again the stated wattage (16 watts) felt about right but maybe a little higher than I would have preferred as I usually vape 1.2ohm around 11 watts, naturally you get more per draw, higher power means higher juice consumption and lower battery life as a result, that said you also get a more saturated intense vape.

For quick comparison, here are some of Vaporesso’s previous pods. 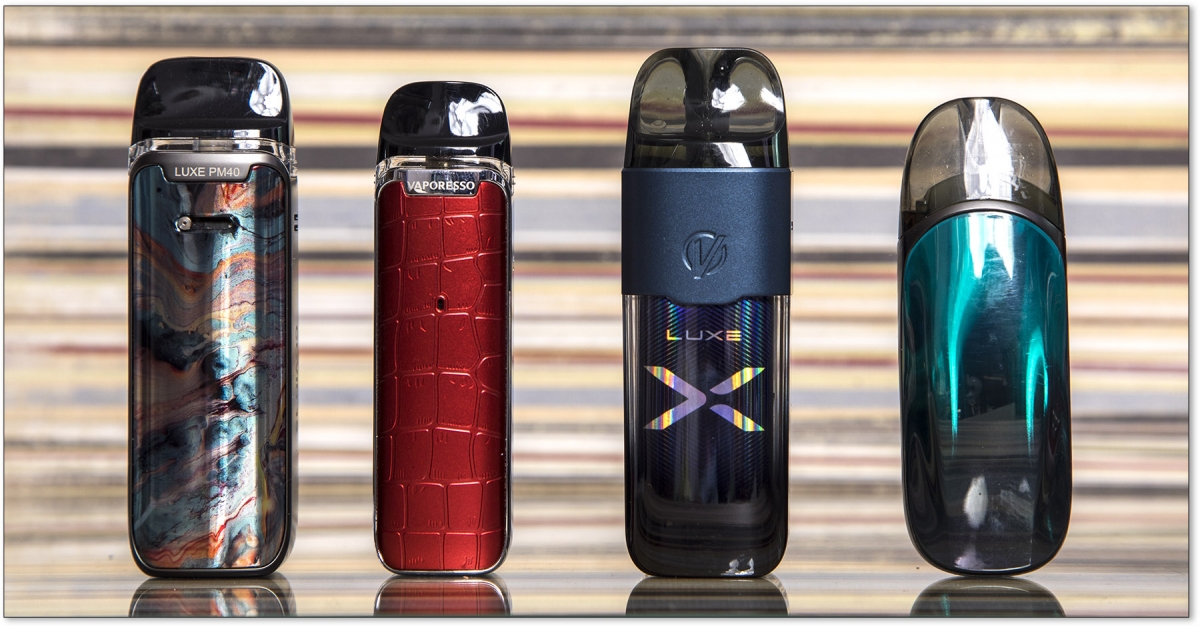 The strange thing is that the Luxe X seems to have beaten them all for different reasons:

Obviously it’s not as clear cut as that as they all have other factors that are possibly better suited to different users but for me, the Luxe X has replaced all three.

Basic? Yes, but this device is about quality and not only in the looks and construction as it delivers a quality RDL and MTL vape equally, which makes it a rare dual purpose pocket pod. I found carrying the two different ohm pods useful for swapping between MTL to RDL while I was out and about, I usually carry two different devices so this made a nice change.

Its simplicity should make it very attractive for new users and it doesn’t come much easier than this, but the surprise was that as an experienced user I found it equally as valuable for short trips out and about. I had to change my habits from expecting auto-draw, time will tell if the lack of auto-draw will prolong its life, but I very much suspect that it will.

Taking the LUXE X for what it is; a simple to use, compact yet powerful pod, then it’s difficult to find any actual cons, there are maybe a few things that some might find off-putting such as no auto-draw, bottom filling, and only two airflow options, but these factors didn’t affect my overall opinion of the Luxe X, only you can decide but hopefully you can find the info you need in the review.