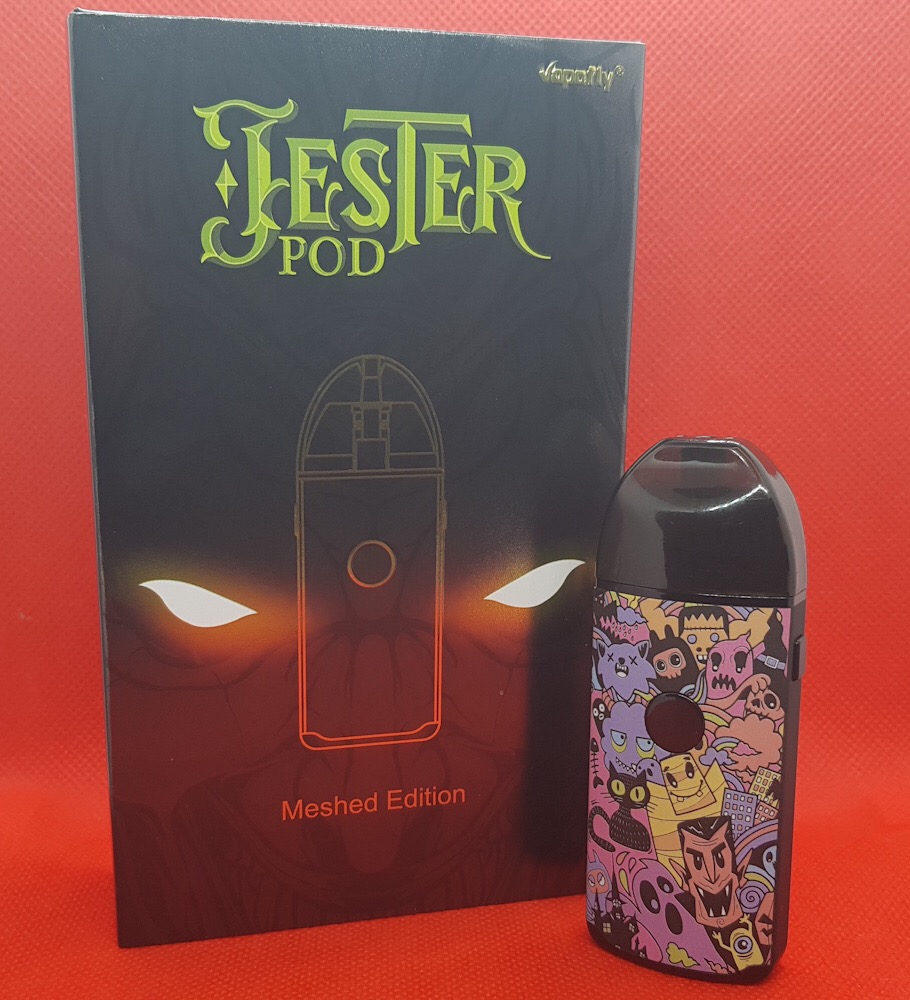 Opening the box reveals the jester on one side and a second box on the right which contains the accessories (2 coils, spare o-rings/plugs and a USB cable). Also in the box is a small fold out user manual in several languages. 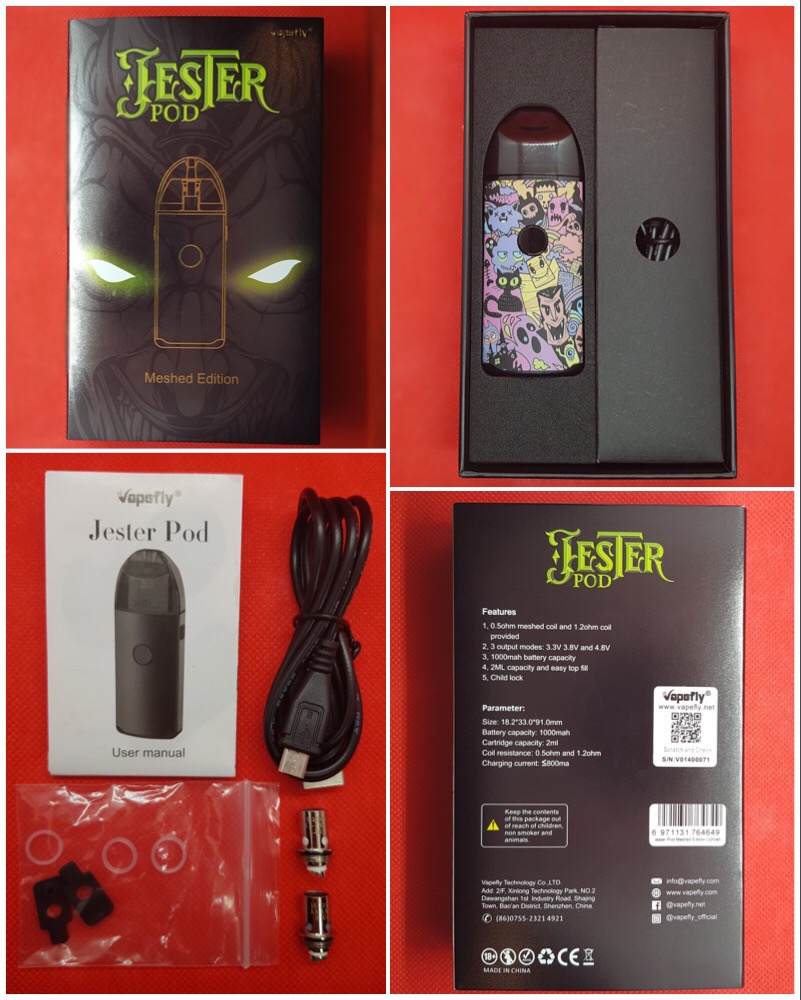 The main unit itself is available in several different finishes, mine came in the “ghost” design. A lot of the designs are quite bold and cartoony and may not be to everyone’s taste, luckily there are some more sober carbon and plain finishes for those of you who don’t like some of the bolder printed designs. It’s a little shorter and squatter than similar designs from other manufacturers and the printed editions have a rubberized soft-touch finish which is very grippy. The overall fit and finish of the main unit feels well constructed and satisfyingly solid in the hand. 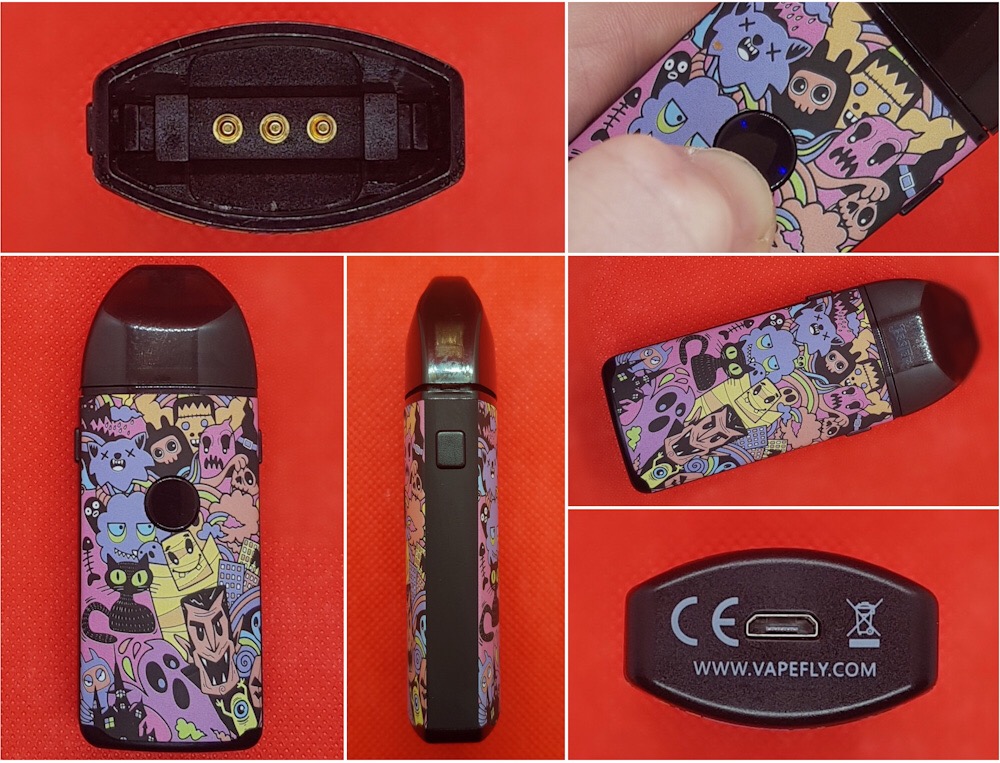 Up front is a large fire button with two inlaid led’s to indicate the chosen power setting. There’s the usual five clicks to turn the device on and off, and three clicks will rotate between the three available power settings. (Purple = 3.3v, blue = 3.8v, green = 4.8v) It should be noted that only the first two settings (3.3 and 3.8v) are available with coils below 0.8ohms.

On the base of the unit is a micro USB port for charging the built in 1000mah battery. During my charge test the device charged at about 0.95 amps achieving 919 mah in 1hour 8minutes, very close to the magic 1 hour marker, which means you’ll never be without power for long.

One thing that isn’t mentioned in the user manual, and I discovered late in the review process by accident, is that pressing the fire button twice will display the remaining battery level. Of course as I can find no mention of this feature anywhere I’m guessing that green is >60 %, blue is >20% and red is <20% from my testing experience. The vape felt consistent throughout the battery life, but once you’ve hit that red power level you don’t get a lot of warning before the battery is completely flat so you’ll need to find a charger pretty quickly.

To remove the pod you push the two buttons on the side of the unit which releases clamps holding it in position, there should be no worries about the pod falling out in pockets or flying across the room as it’s most definitely firmly held in place with this system and gives a satisfying click when pushed back into place. On opening the pack there’s a small strip of tape across the contacts at the base of the airflow ring to prevent firing whilst in shipping, quite why it’s here I’m not sure as both coils are shipped in the separate accessories box but I guess better safe than sorry! You’ll also find the spring loaded contact pins in this top section which look and feel sturdy.

Coils simply screw into the airflow base and then the whole coil/airflow assembly is press fit into place. It should be noted that there is a flat edge on the airflow assembly which needs to be lined up with the corresponding flat edge in the pod itself. Once in position it’s very secure, in fact I have on occasion found it very difficult to later remove it from the pod to change coils! 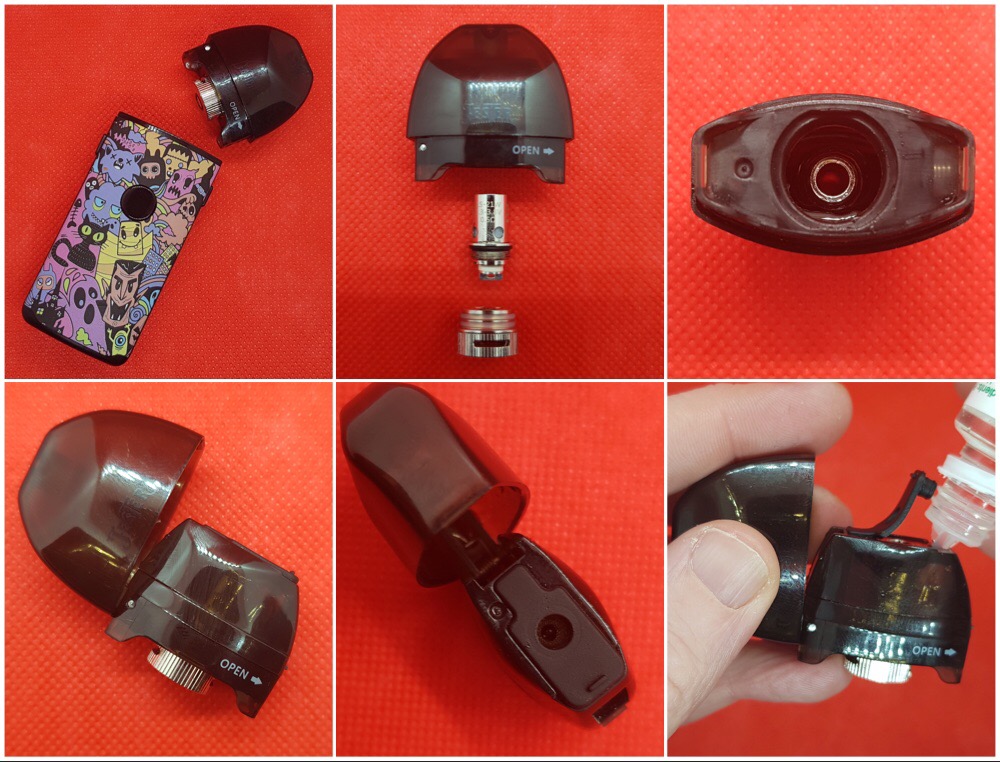 Filling is a faff, first you have to remove the pod from the device, then there’s a smaller button on the side of the pod that releases the outer portion which is hinged to the other side, next lift the rubber bung to access the fill port. The fill port is a reasonable size so I’ve had no difficulty filling, however the pod is made from a fairly dark plastic which means it’s difficult to see your eliquid level without holding it up to a light, and it’s virtually impossible to see in use resulting in a few dry hits when I’d run out of eliquid without realizing. The design also makes for a fairly bulky mouthpiece which is not the most comfortable to use (the mouthpiece on the rebuildable section is a little slimmer and more comfortable). I think the kindest description for the stock coil pod in particular would be “over engineered”, on the plus side though I’ve not experienced any leaking or condensation build up which is often present in similar pod systems.

The coils more than make up for this though, the 0.5ohm mesh coil in particular gave a particularly warm, flavorful vape on the second setting (3.8v) with a very restricted lung hit even with the airflow fully open, this is most definitely not a cloud chucker. The 1.2 ohm round wire coil was also very flavorful and again seemed to perform best at the blue (3.8v) setting and thanks to the adjustable airflow you can get a proper mouth to lung hit albeit on the slightly looser side. Both coils also faired well with 70/30 eliquid as well.

Overall I’ve had a lot of fun testing the vapefly jester. The stock coils have great flavour and decent life, as a direct lung vaper obviously my pick would be the 0.5 ohm mesh coil but the 1.2 ohm round wire coil is also a great choice. Construction feels solid overall and this is only slightly let down by the fiddly filling system and the overly dark pod. The low $17.14 starting price for the meshed edition, and $20.03 for the rebuildable edition, also make this a very attractive proposition.

I suspect many users will be drawn to the Jester thanks to the rebuildable pod, so much so I’ve ordered one for myself, but I’ll leave that to our other resident reviewer Si Davies to cover in more detail in his review which focuses more on using the Jester from a MTL users point of view.

Many thanks to Healthcabin for sending the Vapefly Jester pod system out for review, and don’t forget to use the code POTV15 if you want to order from their site.