Sourcemore asked me to take a look at the latest AIO kit from UWell and this time they’ve gone all Lord of the Rings on us with the Aeglos “one pod to rule them all”. (For those of you who aren’t nerds Aeglos is the name of an elven spear in lord of the rings)

In the box you’ll find the Aeglos pod including two coils (one preinstalled), spare o-rings, usb-c charge cable and the usual paperwork. It’s available in five different colours (black, grey, blue, gold and red) and I was sent the black variant for review. 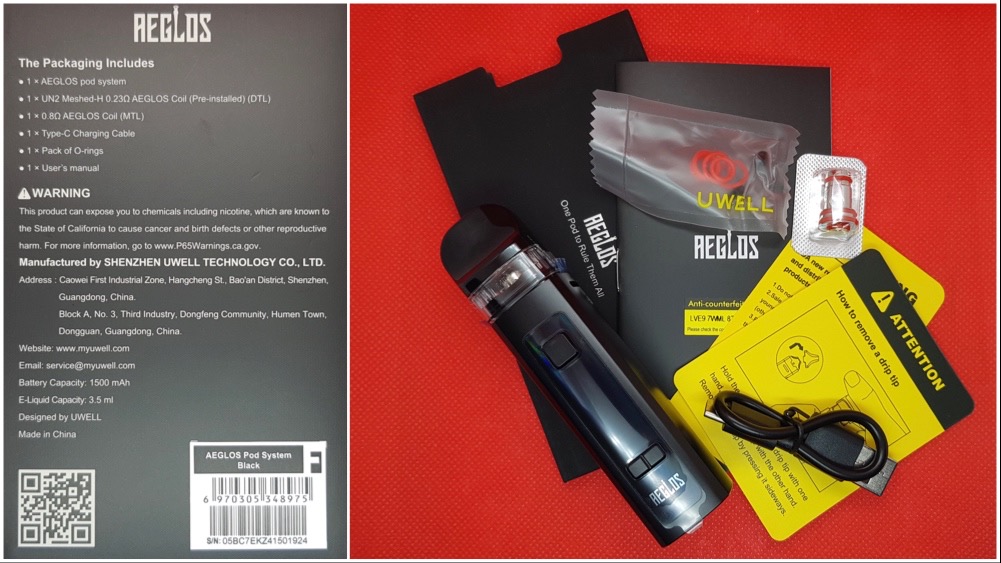 The Aeglos follows a now familiar layout for these sub-ohm pod kits with a pod inserted into the top of the aluminium battery section, but there are a couple of twists. Airflow comes in from the side of the battery section through two large cyclops vents but in this instance there is adjustable airflow which is hidden under the pod itself in the area around the large spring loaded contacts. This is clearly labelled, and a quarter turn will get you from fully open to almost closed but this has both its pros and cons. On the downside, every time you want to change the airflow you’ll need to remove the pod first, but on the up side it means that the airflow can’t get accidentally adjusted once you’ve got it dialled in to your liking. The fact that the airflow is located on the sides away from the power button also means that you’re much less likely to cover the airflow with your fingers as well, which is something I’ve encountered quite a lot recently with other kits.

The pod is held in place with a friction fit rather than magnets which takes a little getting used to but works just fine with a minimal amount of movement in the pod. I could see this being a problem long term with wear and tear, but fortunately spare pods are available should that be the case.

There’s a fairly bright and clear screen nestled between the power and up/down buttons. The information on the screen is all well laid out and legible even without my reading glasses as well. The Aeglos feels comfortable in use with softly rounded edges, and the buttons all have a pleasant positive feel with a definite click and, I’m happy to report, zero button rattle. The board seems responsive enough with instant power when you hit the button, and there are of course all the safety protections you would expect to find.

The internal 1500mAh battery is charged via the usb-C port on the bottom of the Aeglos where you’ll also find some emergency vent holes. UWell claims a 90% charge can be achieved in under an hour, and in my test this peaked at 1.59 amps charging rate but spent most of its time in the 1.3~1.4amp rang hitting 1361mAh in 1 hour with a final capacity of 1495mAh in 1 hour 25 mins. 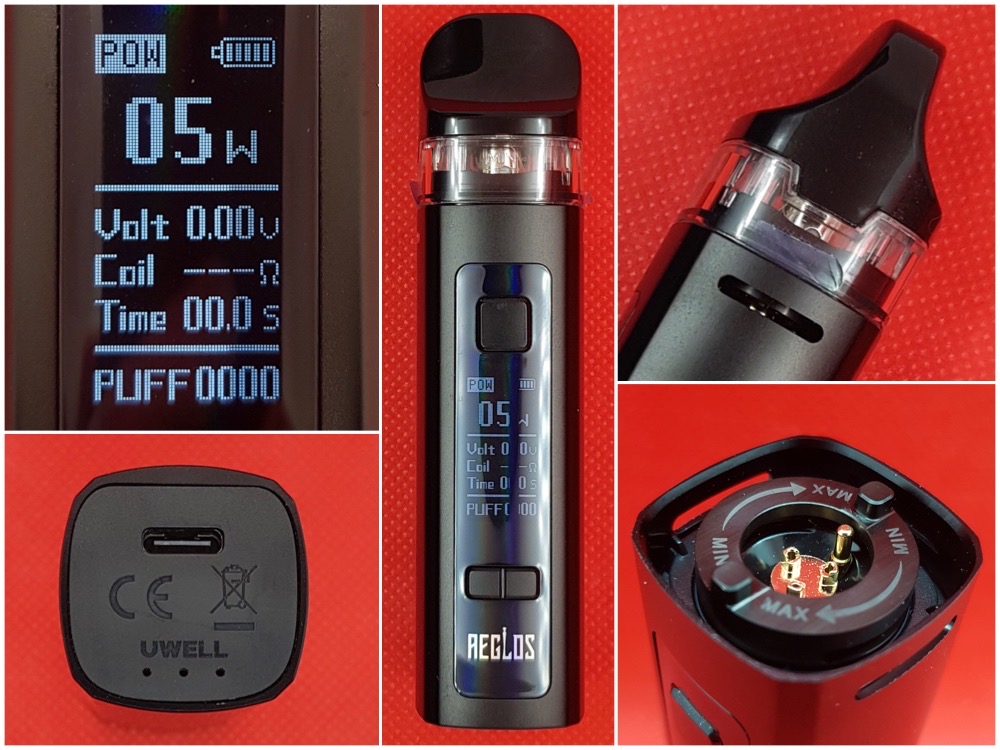 Coils are press fit from the bottom of the pod as is common these days, and two coils are included in the kit, a 0.23Ohm mesh coil and a 0.8Ohm round wire coil. Bonus points go to UWell for stating that the coils are FeCrAl (kanthal) in the included user manual, which means they should be suitable for all users.

Filling is a little different than most pods. Rather than using a bung, you pop the duckbill style mouthpiece off the pod to reveal a fill port on one side of the chimney and a relief hole on the other. I was a little sceptical about this as I hadn’t used a similar design previously, but it works brilliantly in practice and filling has been easy and largely mess free… be wary of overfilling as that relief hole on the opposite side can quickly become a jet of e-liquid if you’re not paying attention! There’s a convenient viewing window in the pod as well which means it’s easy to judge your remaining e-liquid levels as well.

I’ve been a big fan of UWell coils in the past, the Nunchaku is still one of my favourite sub-ohm mesh tanks, and as these are like baby Nunchaku coils my hopes were high.

The 0.23Ohm mesh coil is rated for 40~45watts. I found it needed around 42watts to get going properly and fared better with airflow fully (or nearly fully) open to get best flavour. This really is like the Nunchaku coils with just a hint more restriction and bags of flavour, I’m suitably impressed.

The 0.8Ohm round wire coil is rated for 20~23watts and I found it perfect at 20 watts with bags of flavour. Even with airflow “closed”, it’s still a fairly loose MTL vape and I suspect a lot of the restriction is actually coming from the coil itself. The duckbill style mouthpiece probably isn’t helping here either so you may want to look elsewhere if you prefer a tight MTL vape. 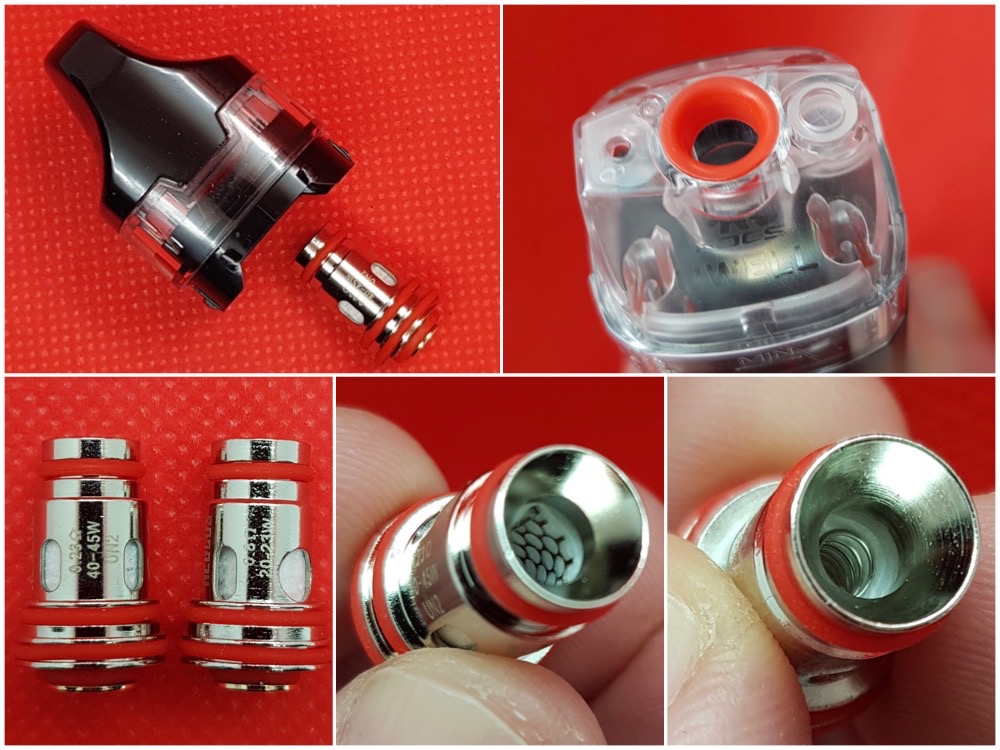 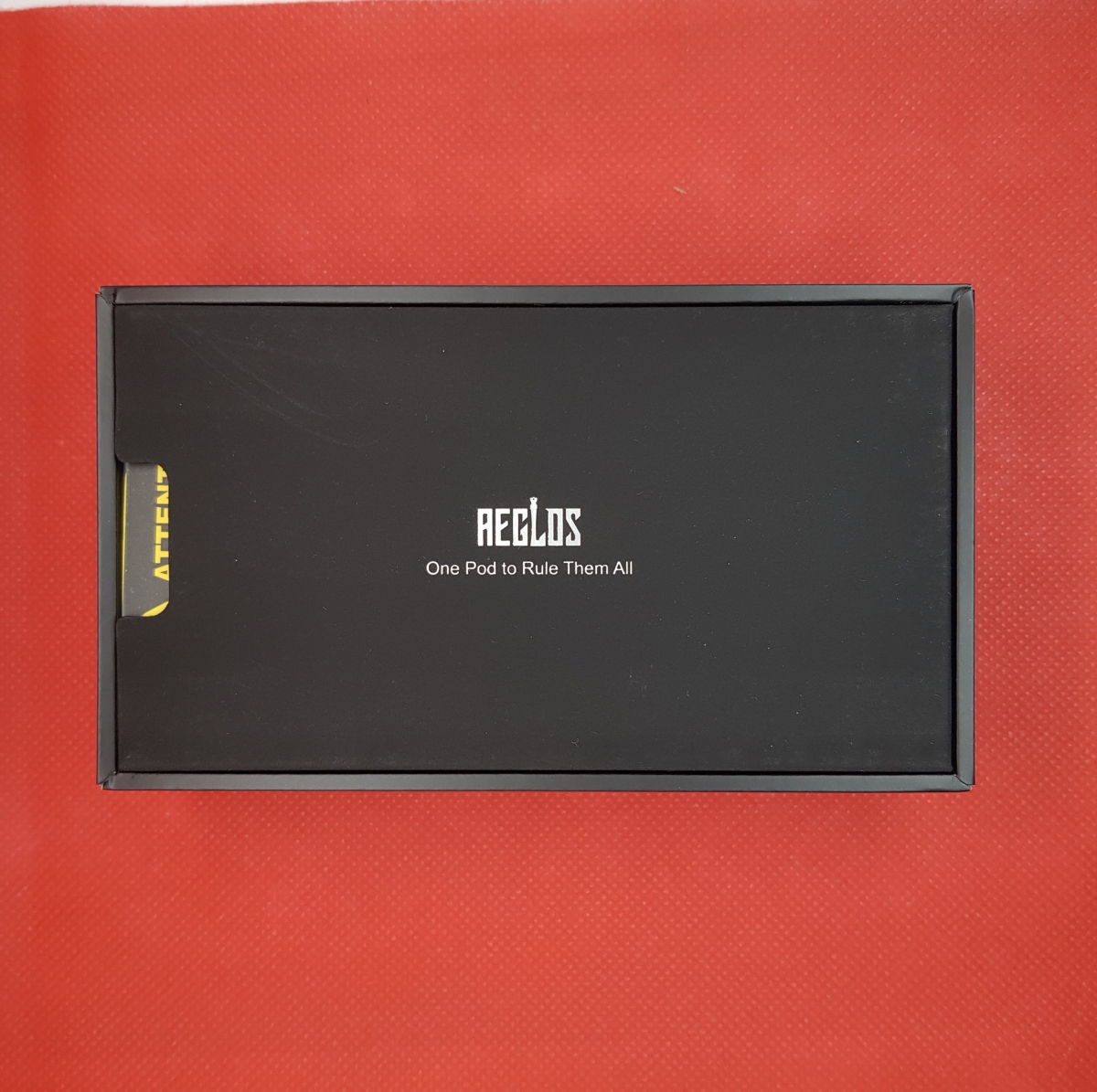 I’ll be honest here, I was just expecting another pod kit but as you may be able to tell from the list of pros above, I’m suitably impressed with the UWell Aeglos kit. It may not do much different from the plethora of similar kits on the market besides the hidden airflow, but it’s hard to ignore those UWell Coils which perform great once again, and because they’re kanthal it means they should be suitable for everyone.

Many thanks to Sourcemore for sending the UWell Aeglos out for review. As is usual, they’ve given me a discount code for you to use “SM8OFF”  will get you 8% off sitewide. 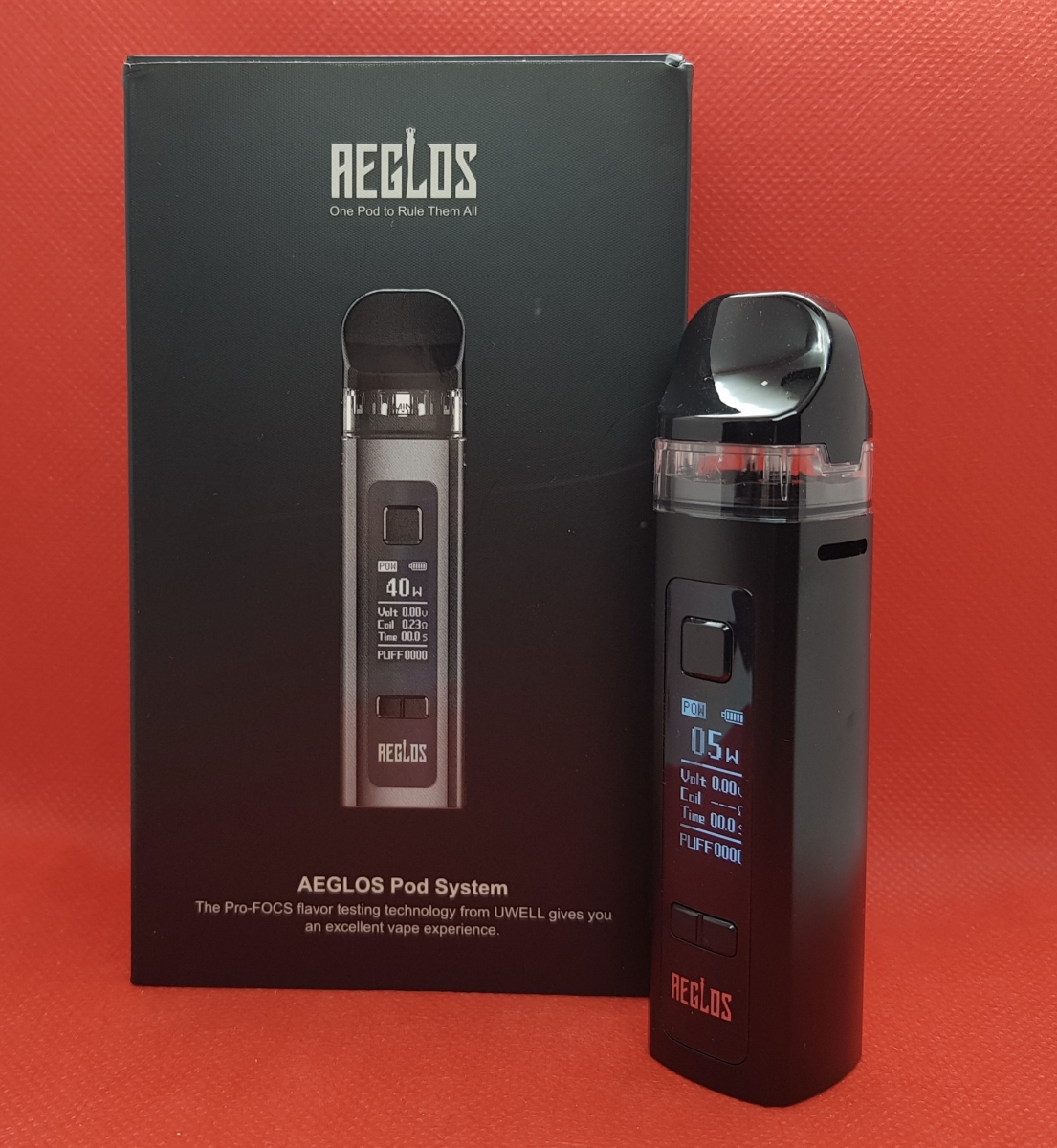