The Unico Mod Pod seemed to be quite popular with the usual band of YouTube reviewers, so keen to see what all the fuss was about, I reached out to Univapo who were happy to send out a kit for review.

The Unico Mod Pod comes in a fairly small box. On the outer sleeve there’s a picture of the kit on the front, scratch ‘n’ sniff code on one side, and sticker on the other side with your chosen colour and a list of contents/specifications. Once you remove the sleeve, you are met with a “scratch and check” giveaway card and the Unico Mod Pod held in a foam tray. On the bottom layer, you’ll find an instruction booklet, micro usb cable, lanyard and a second coil. 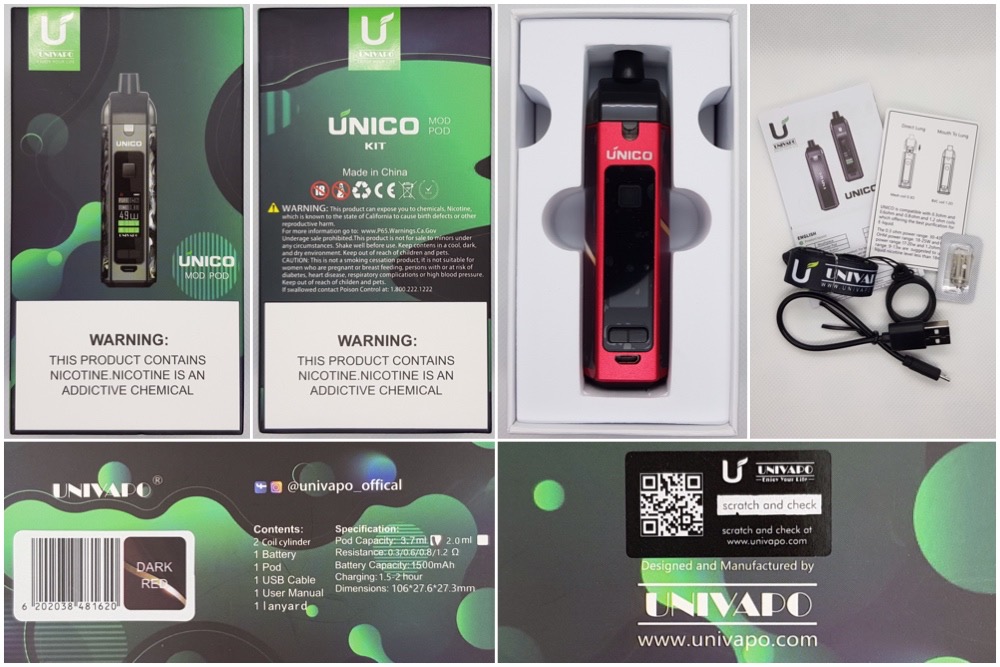 The Unico follows the now familiar “pod mod” format with a slightly squared off tube battery section with a pod in the top. The main chassis is metal with coloured stickers on each side and a “carbon fibre” sticker on the back. There are currently seven colour options available, and Univapo sent out the “Line” and “Dark red” variants for review. The stickers on the sides of the “Dark red” variant have a couple of minor wrinkles in them, the stickers on the “Line” option appear to be perfect though so this is simply a minor QC issue. The teeny wrinkles on the red one aren’t a deal breaker and I’m being super critical here as the build quality and finish is otherwise above average.

The bottom is made of plastic and is flat so the Unico will happily stand upright on a desk. There’s no obvious venting here so I’m assuming should anything go awry, the USB port acts as the emergency venting instead.

Up top is the pod (more on that later) which is recessed into the battery section and held in place by four magnets which do a great job of holding the pod in place. There’s no excess wiggle in the pod either once its fitted so there should be no worries about losing pods in pockets etc, and the pod easily passed the customary shake test remaining firmly in place. Air is fed to the pod via the two U shaped cutouts on the front and back panels which gives the Unico a very sleek streamlined look. The two contact pins for the coil are also in this section, they appear to be suitably robust and are spring loaded. 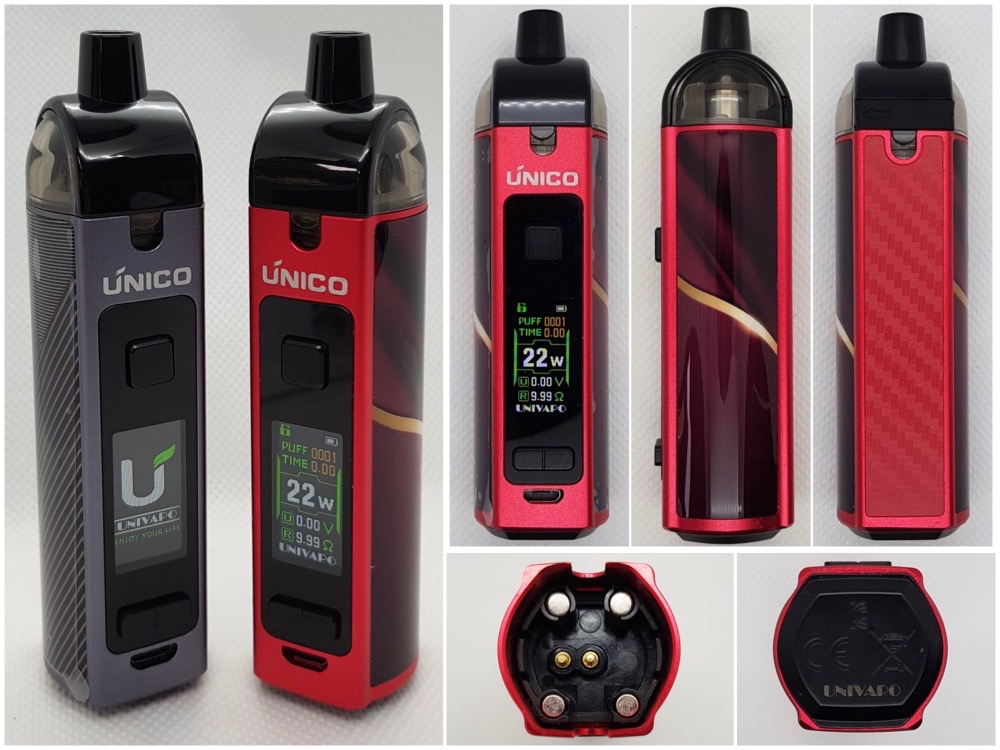 The front panel has the power/up/down buttons. These are plastic and raised up off the main body making them easy to locate. They have a nice click to them and there is zero button rattle. Between the buttons is a clear, bright, 0.96 inch screen which has all the information laid out in a logical manner. I was particularly impressed by the wattage display, which I could see even without my glasses, and the brightness which meant it was clear even when outside.

The control scheme is easy and well thought out. You can change the colour of the display by quickly pressing the power button three times. Pressing power + up locks all the controls, Power + down clears the puff counter and, finally pressing up + down locks the wattage adjustment. The latter has revealed a very welcome design choice, when you insert a new coil into the Unico it will automatically select a default wattage (and set a maximum wattage allowed). Don’t like the default? Simple, adjust the wattage up or down to your taste and then lock the wattage, the next time you insert the pod rather than going back to the default for that coil like many other pod mods do, the Unico will stick to the wattage you have set. There are several “bigger” manufacturers who should take notes here, this is how it should be done!

The front panel also houses the usb charge port. The Unico charged at 0.92 amps and displayed a battery percentage on screen whilst charging. The screen goes off after 1 hour and 30 minutes with a recorded charge of 1400mAh. It continues to trickle charge for a further 20 minutes though (total time 1hr50m) with a final recorded capacity of 1483mAh. Whilst this all falls within the design specs, I would have preferred to see slightly faster charging, but it’s not a deal breaker by any means.

The Pods and Coils

The pod follows the airflow-control base-coil-pod formula with the coils screwed into the afc base which then screws into the bottom of the pod. This is where things get interesting as there are several very clever design cues in play here. First up is the fill bung which is on the “front” and is accessible even with the pod inserted into the mod, this makes filling very convenient and mess free. Next are the clear sides, finally a pod which I can easily see the eliquid level! The afc is usable, although with it completely closed there is still some air getting through. You can cut it down if required, and it’s all topped of with an integrated drip tip which has been very comfortable in use as well… should I stop gushing now? This has all been leak and condensation free as well, a rarity in pod mods. 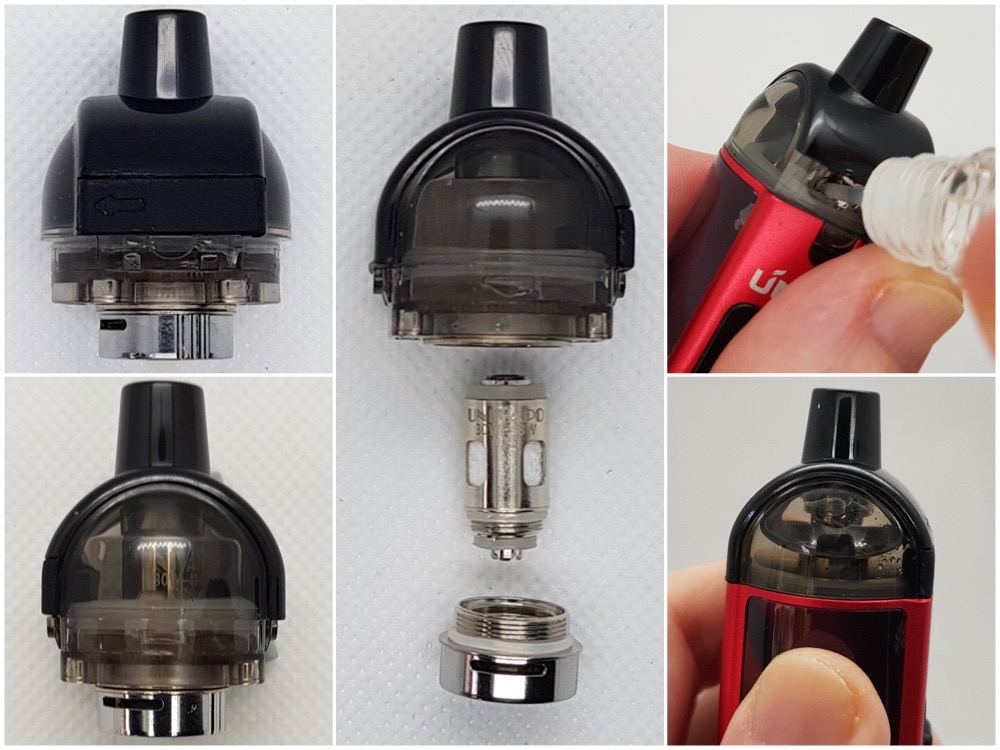 The Unico currently has four coil options available, a 0.3Ω and 0.6Ω mesh coils for direct lung vaping, and 0.8Ω and 1.2Ω BVC (round wire) coils meant for mouth to lung vaping. The coil material isn’t stated anywhere so I asked Univapo and was told that the 0.8Ω coil is nichrome whilst all the others are Kanthal. This means that this might be a good choice if you have a nickel allergy so long as you avoid the 0.8Ω coil, obviously!

A 0.8Ω bvc coil and a 0.3Ω mesh coil are included in the kit, but Univapo were kind enough to send some of the 0.6Ω mesh and 1.2Ω bvc coils as well so I could test the full range. These are supplied in packs of three, with the coils in individual sealed blister packs.

The 1.2Ω coil defaults to 11W (max 13W), and I found this was perfect for me with the airflow half open for a loose mouth to lung draw. You can, of course, close the airflow more if you want an even tighter draw. I was pleasantly surprised by the flavour from this coil and, thanks to the low power requirements, I got about 800 puffs from a full charge… outstanding!

The 0.8Ω coil (included) defaults to 17W (max 20W). Flavour was good but I felt the 1.2Ω coil perhaps had the edge here, and again battery life was good with 750 puffs recorded.

The 0.6Ω mesh coil defaulted to 22W (max 25W). This time I felt like it was a little lacking and found it performed better at 24W which is where the ability to lock this wattage in by pressing the up + down buttons came into play. Flavour was again good, although it seemed to be lacking some of the higher notes compared to other pods I’ve used recently. It’s still a very pleasant vape though. Battery life obviously starts to take a hit here with 372 puffs on a charge.

The 0.3Ω mesh coil defaulted to 35W (max 43W). This felt much punchier than the 0.6Ω mesh with crisper top notes even at the default 35W, and this would be my preferred choice out of the two mesh coils, but the battery really took a hammering here with just 218 puffs recorded. 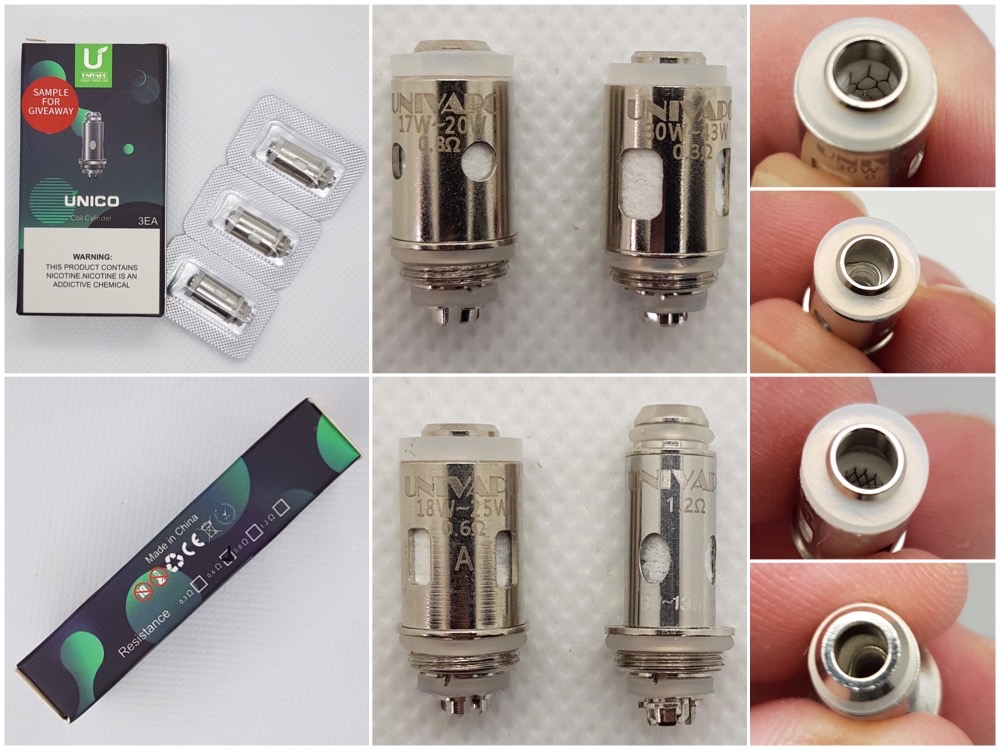 There are lots of clever design features in a small package here, from the concealed airflow and the pod with its easy filling and visible eliquid levels. I’ve enjoyed the mesh direct lung coils, but as is often the case with this type of kit, the battery life suffers so for me this kit really shone with the 1.2Ω MTL coil with its outstanding battery life. As this seems to be only the second kit from Univapo, I’m definitely looking forward to seeing what they come up with next.

Many thanks to Univapo for sending the Unico Mod Pod out for review. As they sent out a second kit, I’ll be running a giveaway for forum members so keep an eye out for that, but in the meantime Univapo have generously given POTV readers a discount code for the Unico Mod Pod on their store, enter SYXL888 at checkout for 15% off. 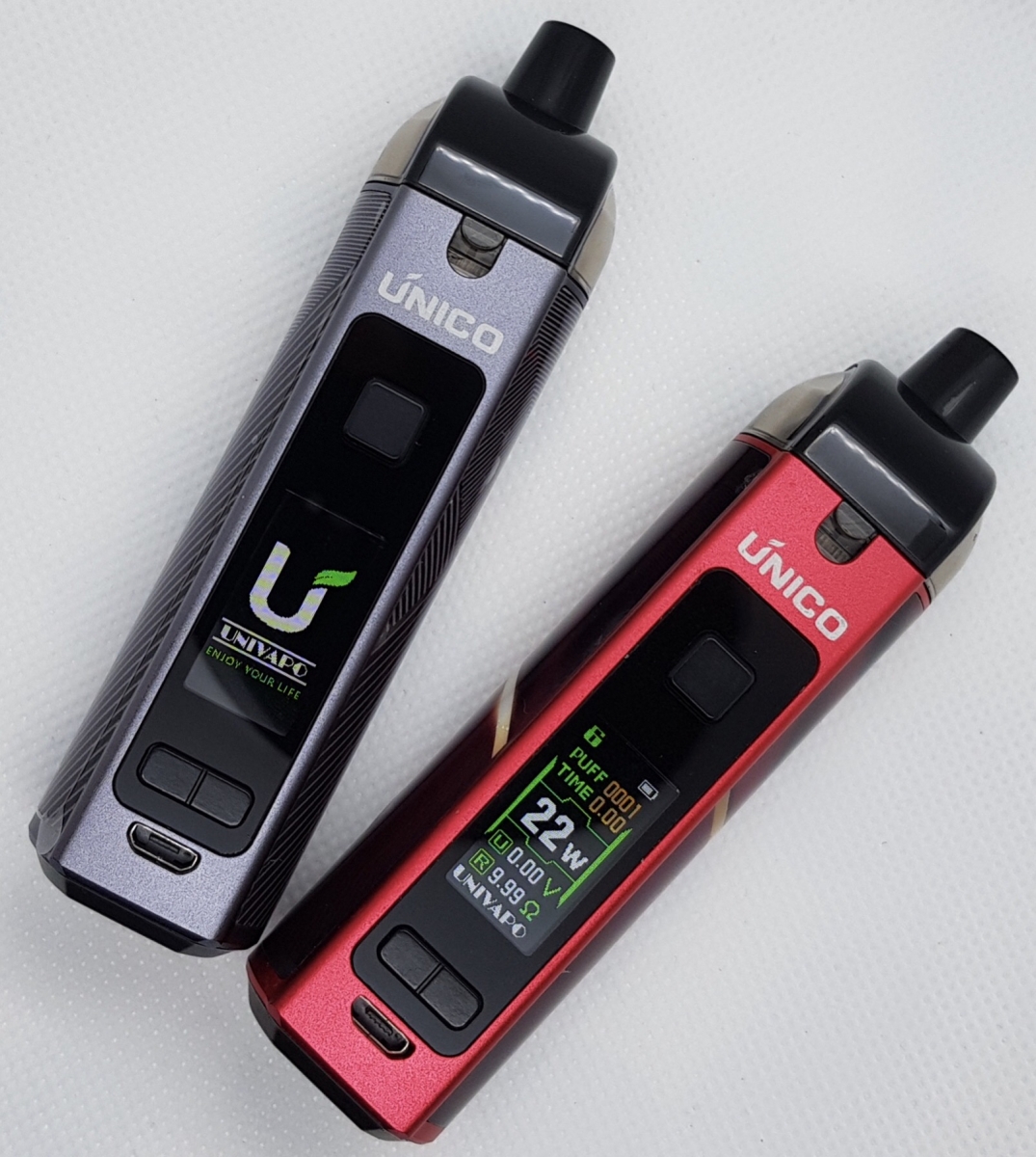