Today for review we have the Smok Solus which was kindly supplied to me by VapeClub.

The Solus is an MTL pod kit that is designed to be simple and to cater to new vapers and experienced ones alike. Solus means alone or unaccompanied and is especially used as a stage direction, so, will the performance be worthy of lavish praise? Let’s find out… 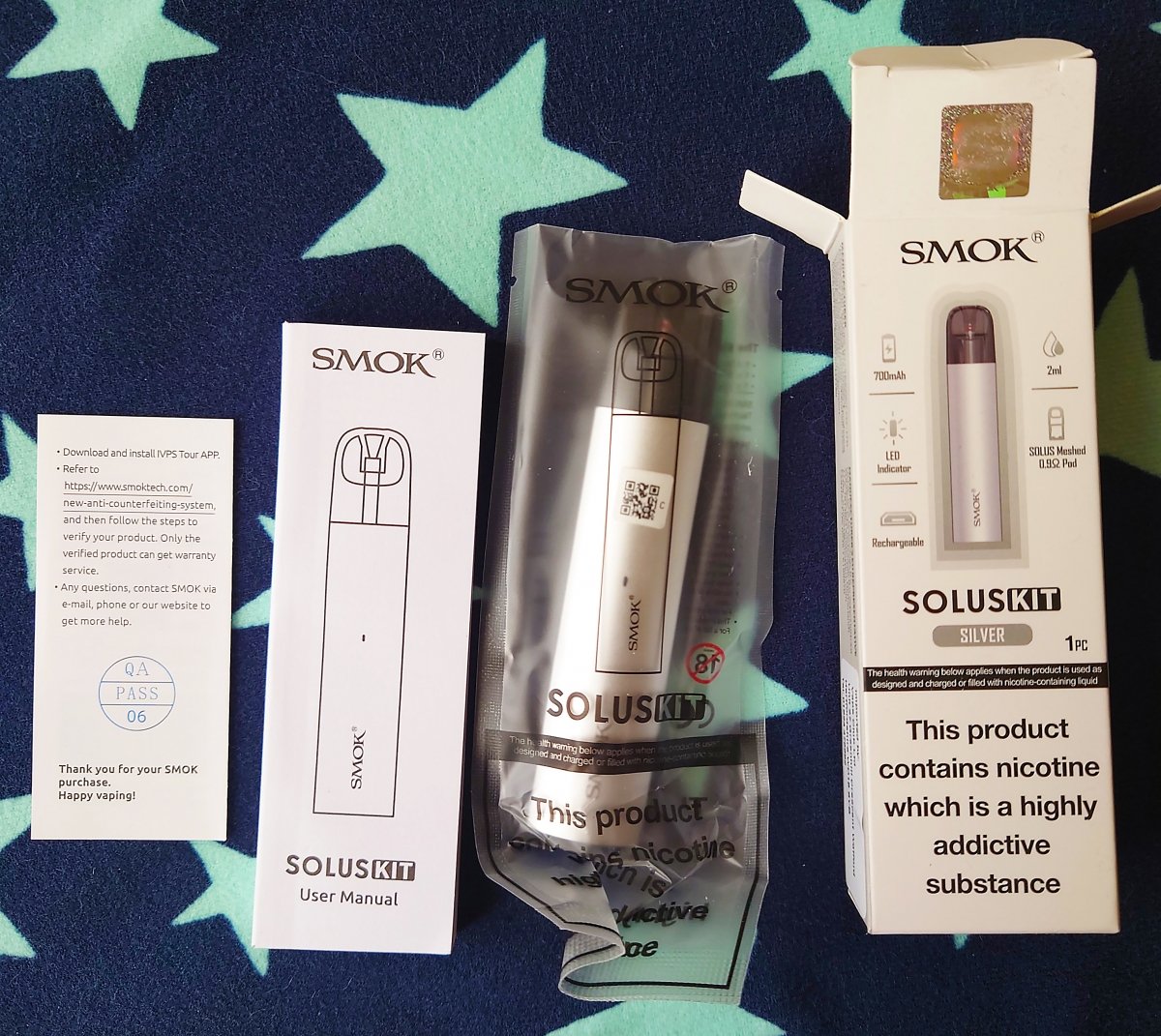 The packaging is all quite standard and there’s not much to it, in fact there’s not much in it either. You slide out the contents to find the device with the pod already sitting in there in a clear packet which tears open easily, a user manual and a QA/Authentication card and erm that’s it. No second pod, not even a charging cable! This is designed to be minimal, and by not including a second pod or cable, it keeps costs down but I’d like to see at least a second pod as if the first one is faulty for some reason, then you’re a bit stuck until you order more pods. I’m glad there’s no plastic tray or anything in the packaging like some companies provide, in fact it all feels very much like the packaging for a disposable vape but this isn’t one which is a good thing, and if it helps combat them, then I’m all for it and the planet will thank you for not using them. I’m sure The Raccoons would be pleased as well, remember them? If you have no idea what I’m talking about then look them up, they were environmentally conscious and the cartoon had a catchy theme tune too. 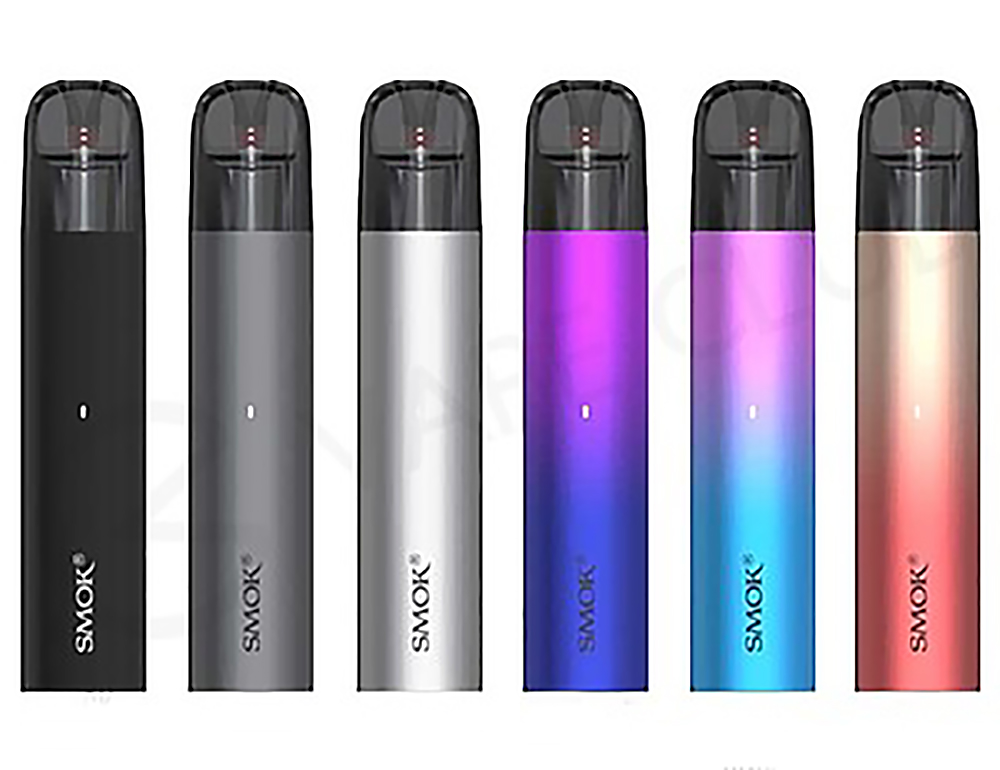 “This is the Evergreen Forest. Quiet, peaceful, serene. That is, until Bert Raccoon wakes up!” - Narrator, The Raccoons

The Solus is as simple as they come. There’s no airflow adjustment, no wattage control, there's not even a fire button! It’s quite small at just 104.3mm x 21.5mm x 13mm and weighs in at just 32g. The kit is available in six colours -black, blue purple, cyan pink, gold red, grey and silver. It’s made of some sort of aluminium alloy and houses a 700mAh battery which charges by micro-usb. This is an odd choice and why they didn’t use USB-C is anyone’s guess, I presume to keep costs low but it’s like getting out my Betamax instead of paying for Netflix, and some people might not even have a compatible cable any more which could be an issue. Charging takes about an hour and a half which is way too long really, but you can vape while charging. The only light or indicator on the device is a small blue light which illuminates when you vape and will flash when the battery is getting low, but other than that there is no way to tell how much charge the battery has so always charge it for a while if you are taking it out with you. The battery wasn’t lasting me all day, but it will last a day at work or for an evening out. 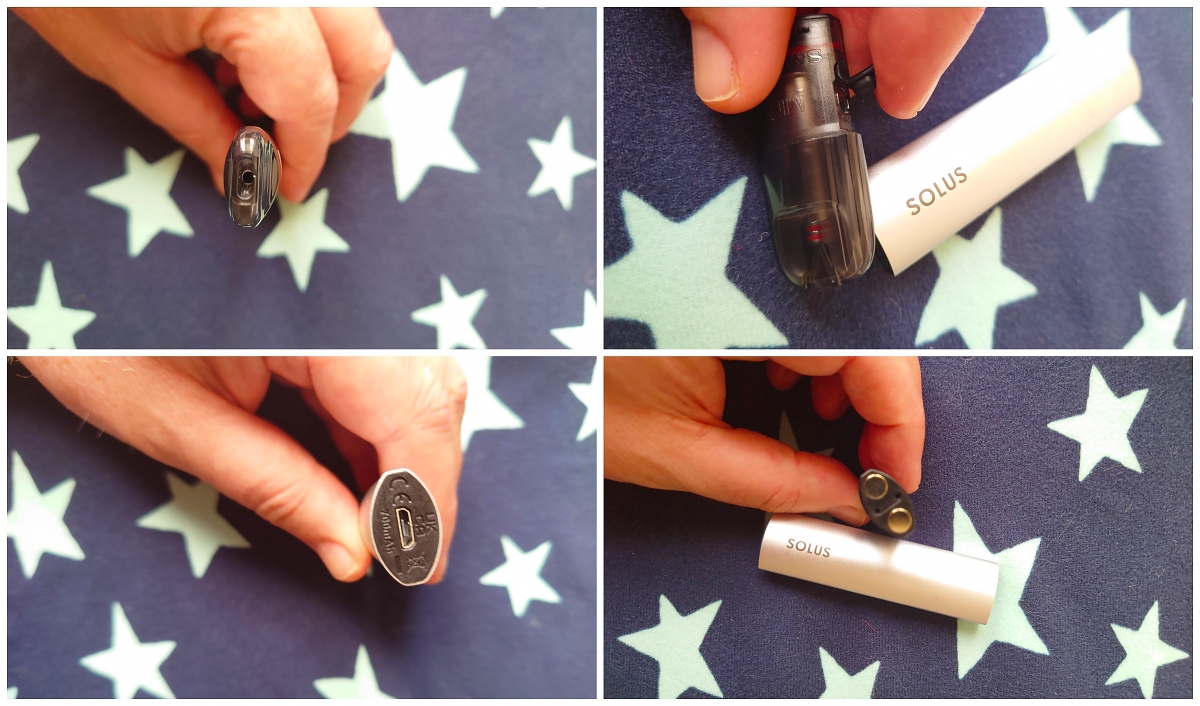 “Why, those meddlesome raccoons! I should have known!” - Cyril Sneer, The Raccoons

The pods are plastic and sit nicely in the top of the device attached by strong magnets which keep it well in place. The mouthpiece is duck-billed and is really rather comfortable as it’s a bit longer than most, more duck-billed platypus than mallard. The pods contain a 0.9ohm mesh coil and are filled via a small bung on one side. Peel back the bung and there’s a small fill port which will take most small nozzles but may struggle with some of the larger ones. It’s quite sturdy so when you peel it back, it can take some doing and it gets really wedged in, but on the plus side this seals the pod well and it’s not likely to break or come loose. The pods are 3ml or 2ml for those of us afflicted by TPB, and they are clearly marked with a “min” liquid level. You can easily see how much e-liquid you have left as they are only slightly smoked and sit somewhat above the device. It’s a simple but effective design. 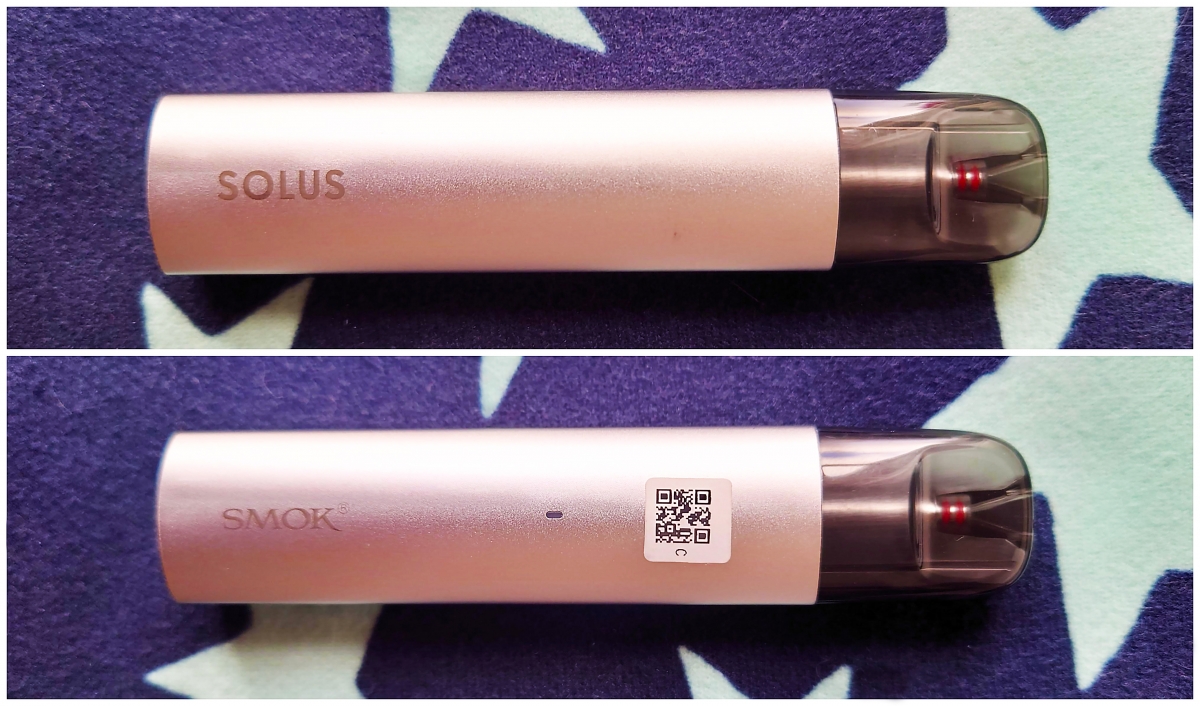 I loaded the pod with some Crème De Tabac, let it sit for ten minutes, and off I went. Now, close your eyes and picture the scene. It’s your first day in your new job, you’re conducting research at the scientific base in Antarctica and you decide to take a look around outside. You turn the corner of the building and there’s a small igloo and some penguins waddle by and go inside. Intrigued, you decide to take a look. Down on your hands and knees you go, and you squeeze yourself through the tight entrance to stick your head inside. All of a sudden, a raccoon smacks you in the face and shoves a cinnamon bun in your mouth, and this is what this is like. By that I mean it’s tight, it’s surprising, and it’s flavourful. The draw is nice and tight, there’s a decent amount of vapour, and the flavour, for a pod, is superb! This is a very nice vape indeed and the auto-draw works flawlessly. I was also impressed that the performance doesn’t drop even when the battery is low unlike some other pod systems. 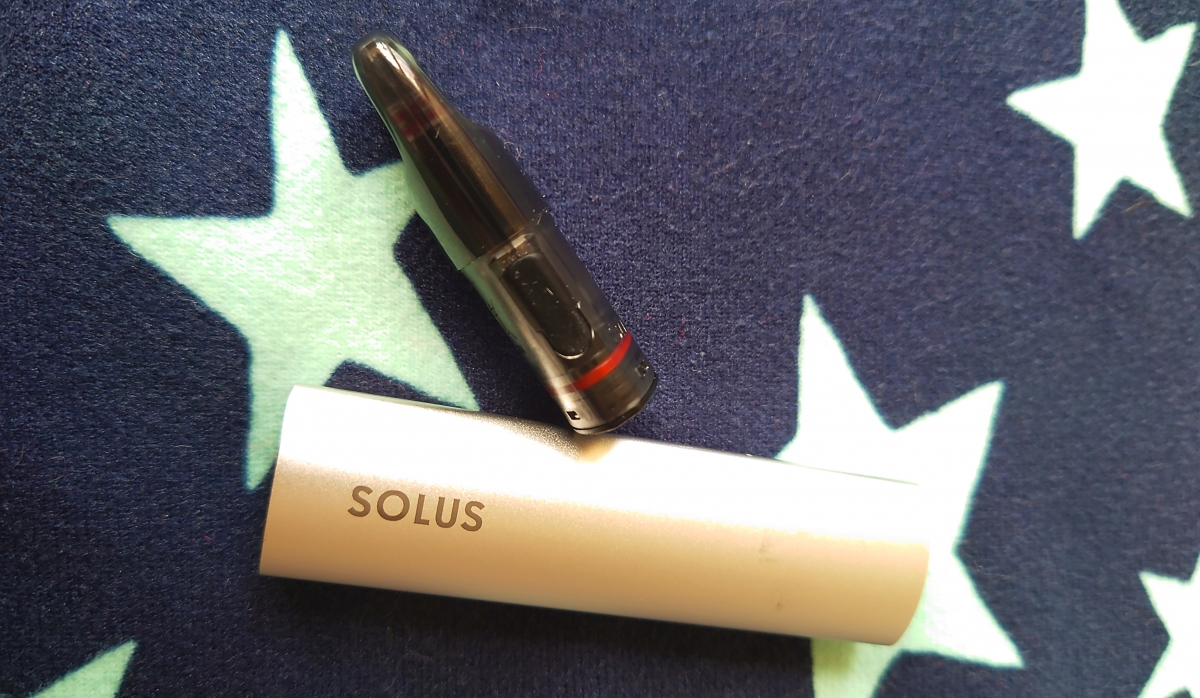 “Run with us, we’ve got everything you need” – Raccoons Theme.

Well, they don’t have everything as there’s only one pod and no charging cable which feels like a missed opportunity. Charging by micro-USB means it takes longer than it should, and there’s no way to tell the battery level. I always like coils which can be changed rather than having to throw away the whole pod, so it’s a shame you can’t replace the coil.

However, the vape is outstanding, the flavour is superb, the draw is nice and tight without being cheek sucking, and the quality of the vape doesn’t drop with the battery level. The auto-draw works really well, and for such a small device, this provides a very satisfying MTL vape indeed. I’ve been vaping with the Solus for two weeks and the pod is still going strong which is outstanding.

This is not a complicated device at all and there are some things which I would change, but the quality of the vape is undeniable. Considering these can be bought for less than £10, this is an absolute bargain and I will be continuing to use this little device for when I’m out and about. This is a great little kit for anyone who likes pod systems. It would be a cracking starter device for a new vaper and anyone who is currently using disposables, go get one of these Solus Kits instead and thank me later. The Raccoons will thank you for doing so. 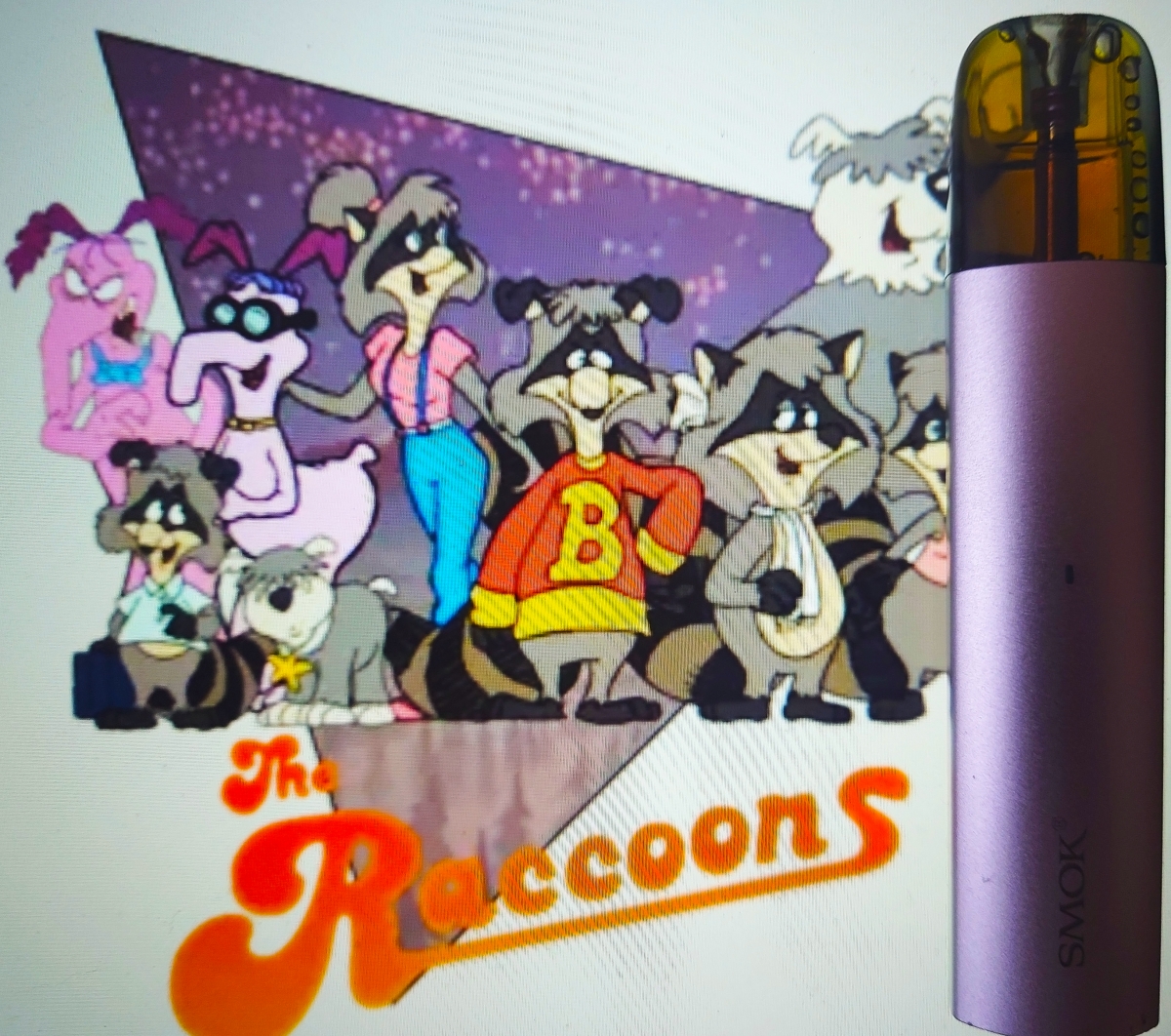