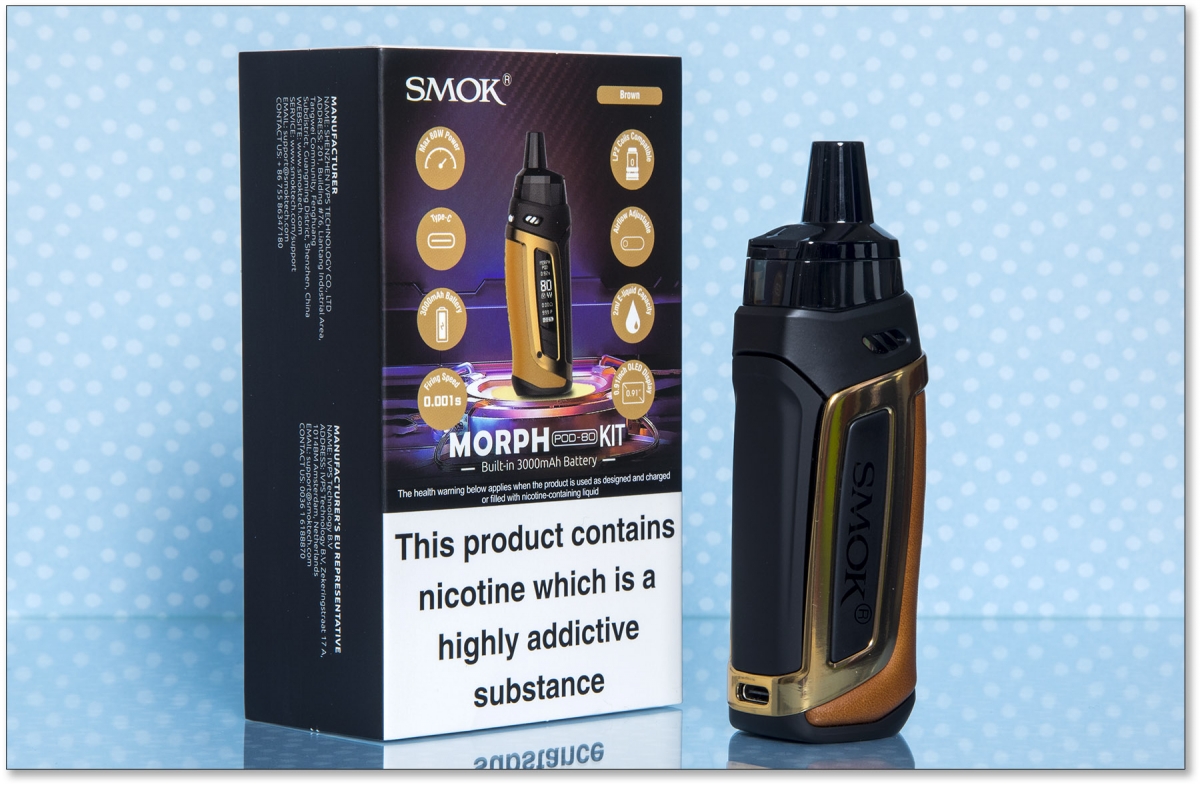 The Morph Pod 80 kit comes in a deep box with an outer sleeve, the artwork on the front lists the main features and it lists the contents on the rear. 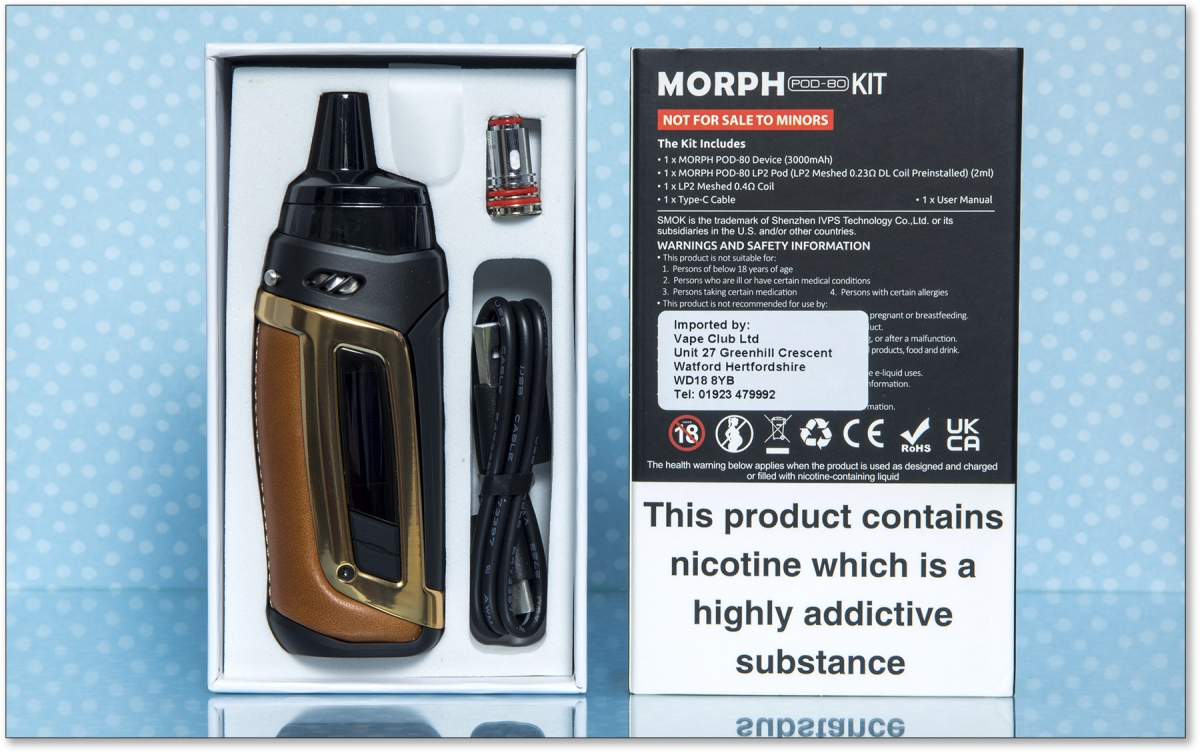 The top layer contains the full kit including two coils and a USB-C cable, there’s a handy little tab to pull out the top layer and the documentation is underneath. 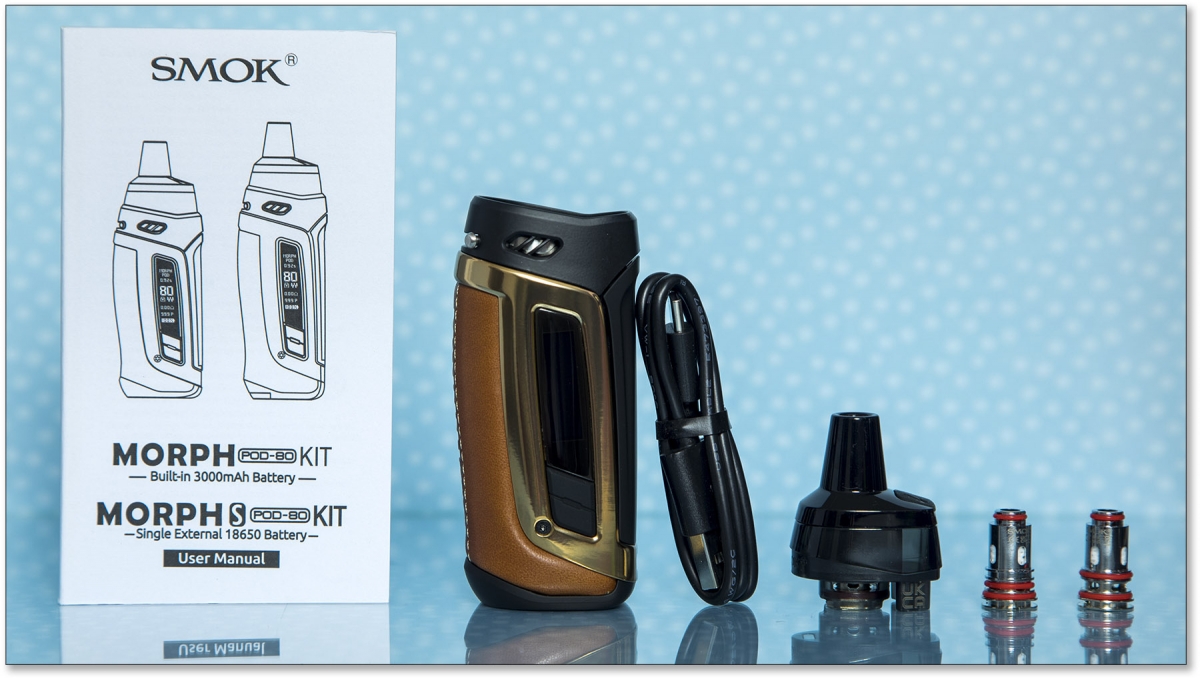 The manual is Smok’s usual thick multi-language phone book but it covers both versions. The print is quite small but it is well written and clear to follow.

The Morph Pod 80 looked and felt far better than I was expecting, the weight is just right for its size and the quirky shape really moulds into your hand, the fire bar is much better than fumbling around for a smaller fire button.

I really like how Smok have made the Up/Down buttons discreet, and the position of them is ideal to prevent accidental adjustments during vaping, but they can also be locked.

Discreet seems to be the order of the day as the branding is subtle despite it being large, one of my favourite features is the gold metal surround as it has a semi matt finish which makes it fingerprint resistant so the whole device stays pretty clean during use. The rest of the body and the fire bar both have a thin rubberised coating which makes it all quite grippy.

The overall design is slanted to one side and the screen follows that angle, it might look a little odd standing up but surprisingly it evens out in the hand. The USB-C charging port is placed underneath the fire bar and is ideal for charging upright. 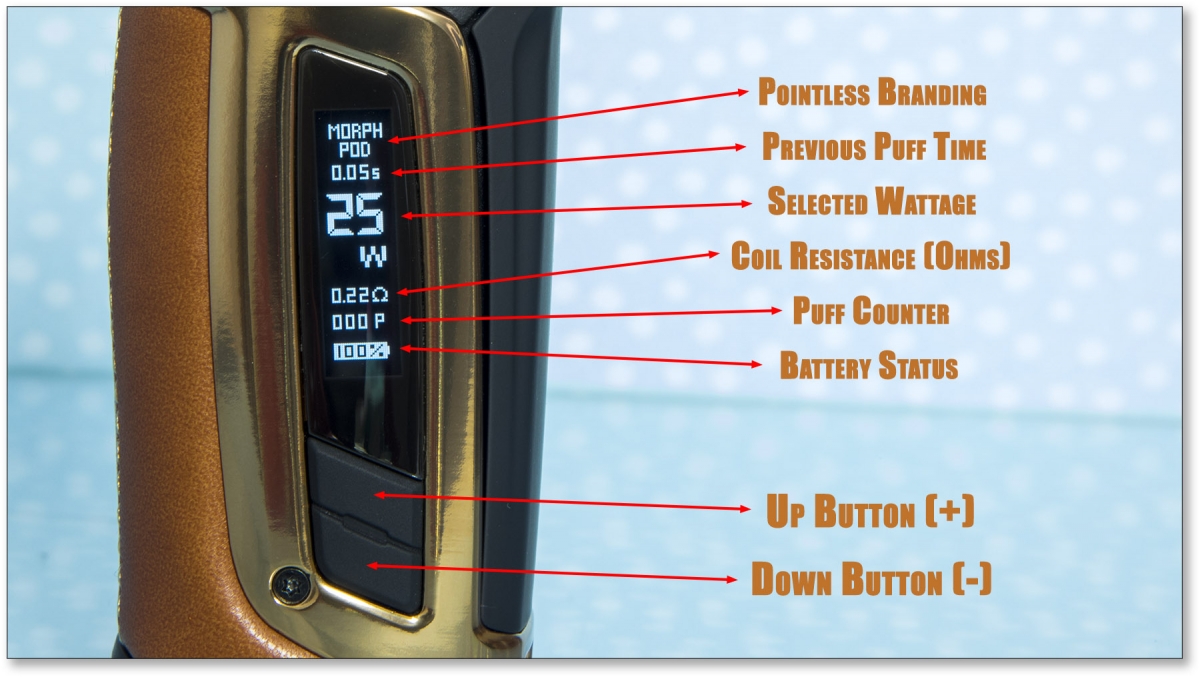 The screen is nice and bright with all the info you need displayed. This was easy to read even with older eyes, and the brightness can be adjusted within the controls. The only thing I didn’t like was the ‘MORPH POD’ displayed at the top, why? But to be fair they did have room for it as they have included everything else.

Smok have done a pretty good job of the airflow control, it can be adjusted with a slider that rotates an internal dual sided ring.

Though this isn’t an innovative approach, it has been done really well. Much to my surprise, it closes off to a proper mouth to lung vape, it seems Smok continue with their understanding of MTL. Unfortunately they only include DL coils in the kit so I couldn’t test MTL, but fully open it gives a very airy DL vape. It is one of the airiest pods I have tried.

One of the reasons for the airflow control being so effective is the pod fitting as the chamber has been divided into two, and the tight fit helps with the seal. It is held in place with two magnets which are firm, and there’s no rattle.

The coils are the LP2 range which are a simple push-fit, don’t be deceived with their small size as they pack quite a punch! The fill port is top-fill via a little silicone bung which is easy to open and close. Access is a bit restricted due to the mouthpiece getting in the way, and worse still for us poor TPD sufferers the internal 2ml bung also gets in the way of filling and vision. This ruins what would have been a superb pod. I did attempt to remove the bung but failed miserably as I couldn’t get a grip on it and it started to ruin the plastic, but I might try again after the review.

One thing Smok advertise as a feature in this kit is the ‘Leakproof Design’ which was one of the shortfalls of the RPM series. I couldn’t spot what they have done in the pods design as the coils airflow hole is exposed, but this is where pods/tanks tend to leak through as excess juice builds up in the coil and seeps through the bore. I’ve had no leaking so far, but time will tell on that one. The pod housing appears to be well sealed so it could be they mean that? As in if it does leak then the electronics are protected?

The chipset is pretty basic stuff, the only thing you can change of the actual vape is the wattage. You can rotate the screen four ways, adjust the brightness, and lock either the power or wattage buttons.

My expectations weren’t very high for this kit as it’s ‘just another Smok pod’ and I’ve tried a few including the RPMs. While the vape was good, there’s nothing new to offer, or is there?

I went for the 0.23 Ohm coil first which is rated at 20-45W. I kicked off with 25 watts and found myself at 35 watts, either my memory fails me or there’s something different going on as the flavour and vapour production was remarkable. I was taken aback at the clouds from such a small coil at 35 watts, I smacked it up to the max 45 watts and enjoyed it even more with a warmer flavour. The draw was silky smooth however much I adjusted the airflow, it was a little loud though but the sound was as expected and there was no whistling.

I then tried the 0.4 Ohm coil rated ‘BEST AT 25W’ so I just went with that, the trade-off of less power was fairly balanced and I enjoyed this coil a lot, I would choose this one if battery life was important as it would last a full day. The flavour and vapour production was still impressive, and again the airflow was silky smooth, but for me the 0.23 Ohm had more of an impact.

Battery life was excellent even with the 0.23 Ohm coil at 35 watts, I got a full day and night out of the 3000mAh internal battery and it performed well even as the battery dipped to its lowest. I did find the tiny font of the battery percentage hard to read on the fly which eventually caught me out and I cursed that wasted space of ‘MORPH POD’ at the top of the screen, a nice large battery percentage would have been much better.

Charging took a little longer than I was expecting as Smok limit it to 1.4 Amps. The longest time was around 1.5 hours but usually it took around an hour for top ups, it's one of those kits where a mobile charger comes in handy. 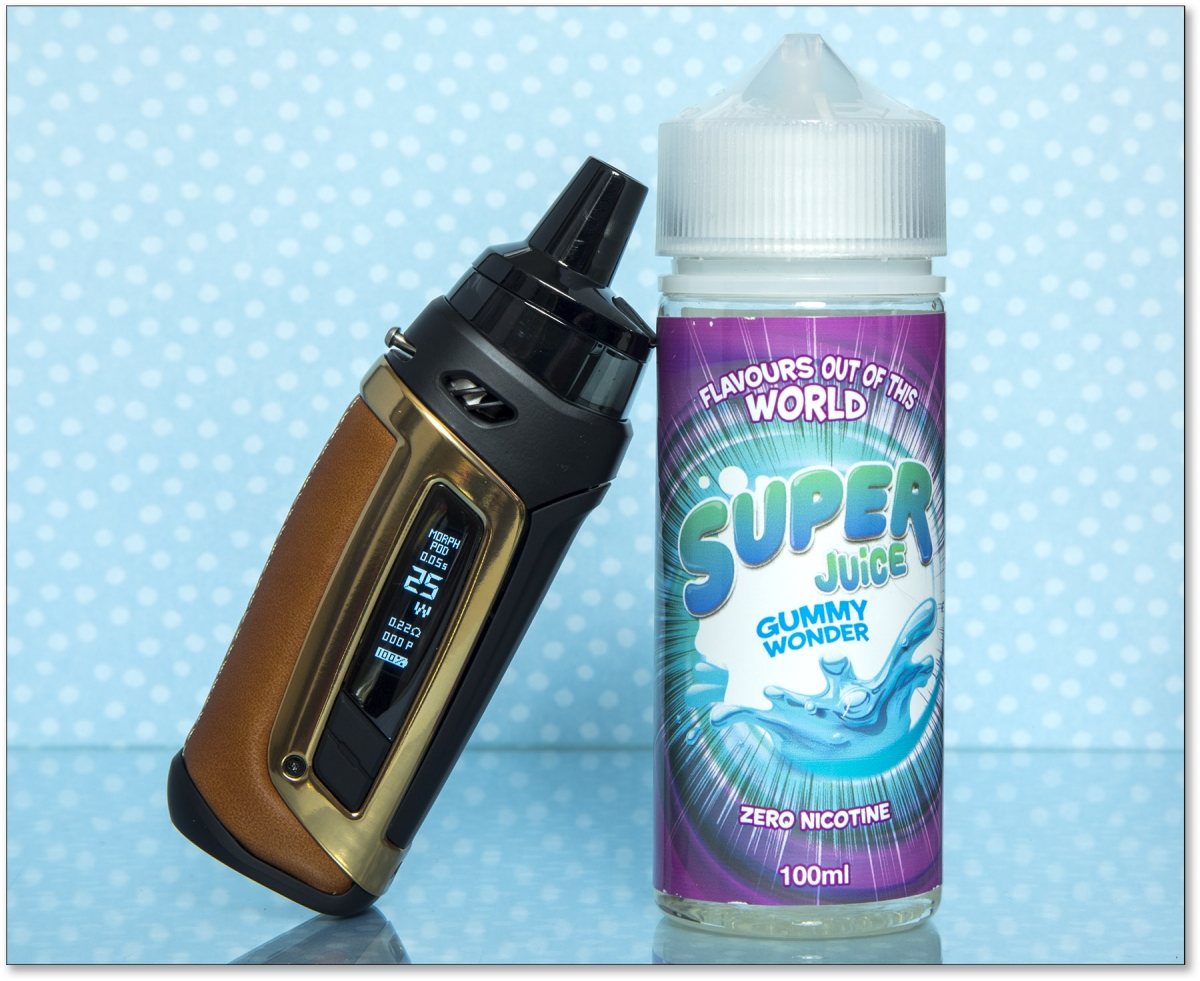 As mentioned earlier, the only real difference between the two is the battery option as the ‘S’ takes an 18650, as a result it has been stretched taller and has a battery door on the base. 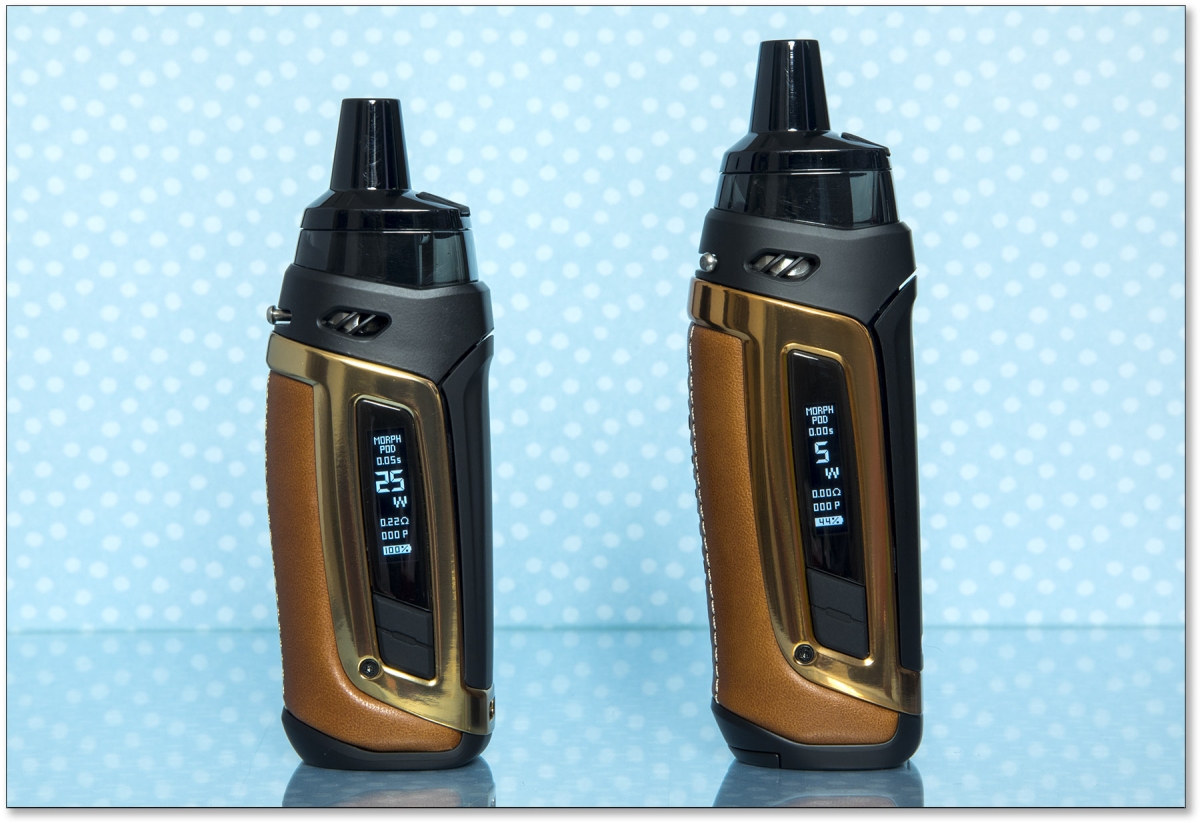 The ‘S’ is slightly heavier but still has the same ‘in the hand’ experience. They vape exactly the same so it pretty much comes down to your battery preference, I used to be an external battery only user by choice, but I’m enjoying a lot of these internal battery kits and I would favour this over the ‘S’.

Despite my reservations, the Smok Morph 80 turned out to be a superb little kit. I absolutely love the 0.23 Ohm LP2 coil for both flavour and vapour production, and the airflow control is one of Smok’s best yet with the added bonus that it will close off to MTL.

The ergonomics make this one of the best ‘in the hand’ pod/mods I have tried, it just gels into your grip and you can finger/thumb/grip fire it however you rotate it. The looks are stylish and the controls are slick, overall I think the Morph Pod 80 punches well above its weight.

I originally didn’t want to review this kit but the Morph Pod 80 quickly won me over as it is one of Smok’s best yet, easily beating their RPMs in my opinion. It soon ‘morphed’ into one of my all-time favourite pocket DL kits, if I can’t get that [email protected] 2ml TPD bung out, I will invest in a proper pod for it. 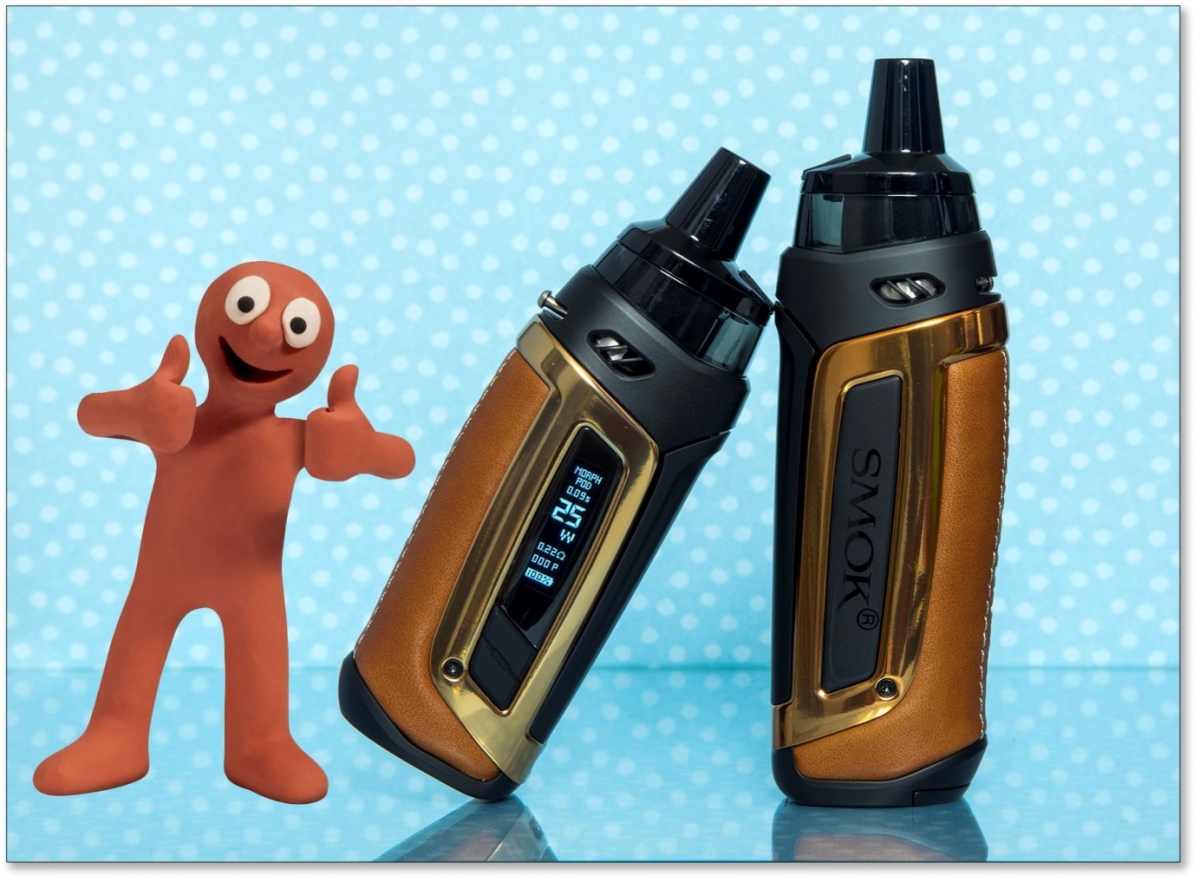