The Electronic Cigarette Company (TECC) have kindly sent out the latest range of SMOK pod mods for us to try out. For some reason this time around SMOK has taken the G-Priv name which has previously been associated with dual 18560 mods with large touchscreens and stuck it on a pod mod. Today I’ll be trying out the G-Priv Pro Pod kit which uses an external 18650 battery, and our very own Michelle (Purplefowler) will be taking a separate look at the slightly smaller G-Priv Pod Kit which uses an internal 2500mah Lipo to give you her take on what’s on offer. 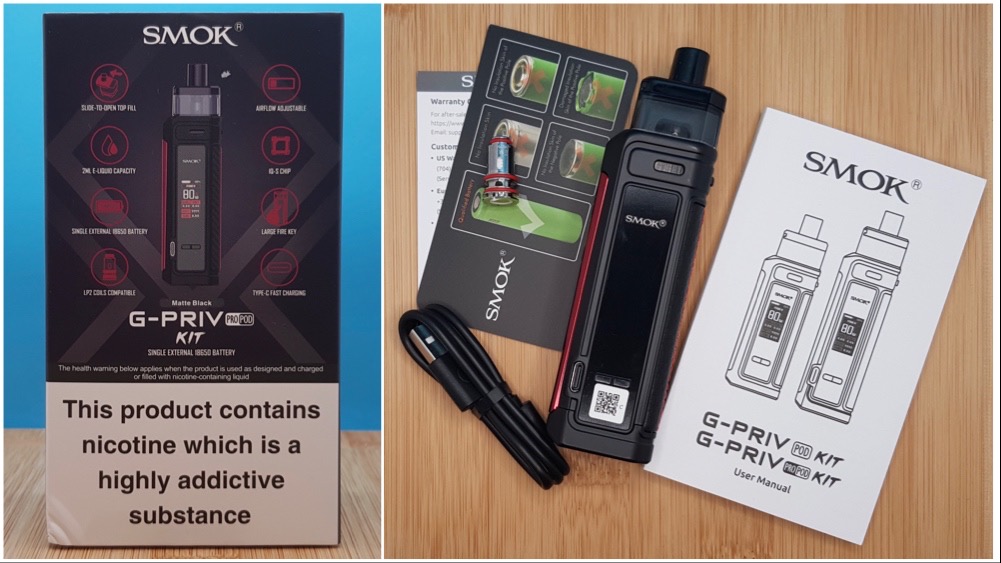 The G-Priv Pro Pod kit comes in a fairly small box with two coils (one pre-installed in the pod), a USB-C charge cable, and a user manual. Nothing special so far then, but once I pulled the G-Priv Pro Pod out of the box I was instantly surprised by how sturdy and well made this felt compared to some previous SMOK pods I’d used, it just feels like the quality has been bumped up a notch or two right out of the gate. 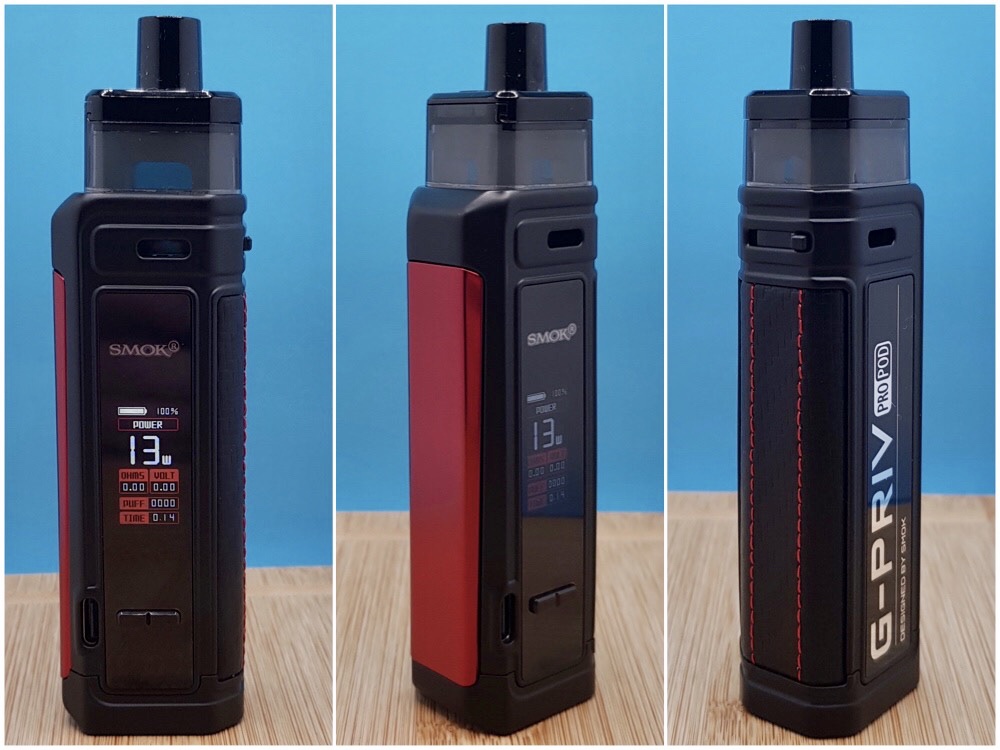 Taking a quick look around the G-Priv Pro Pod, on the one side you have the control panel with a bright colour screen along with the up/down buttons and a USB-C charge port, on the opposite side is a panel with a large G-Priv Pro Pod logo emblazoned across it. Now I’m not normally one for such brash branding, but this perfectly suits the overall design in play here and feels well executed. The front is dominated by a large fire bar running practically the full length of the panel, a detail carried over from earlier examples of the G-Priv series, and I am particularly taken by the red anodised metal used here in this “matte black” edition of the kit as it really makes the whole thing “pop” visually. Finally there’s a lightly padded “leather” grip around the back of the device along with an airflow adjustment lever.

I have to say the materials used and overall build quality feel a step above what I’ve seen from SMOK recently, the red anodised fire bar feels so much better than the plastic one on the Morph Pod 40 I took a look at a while ago for example. There isn’t a squeak or rattle present anywhere either. The only part that lets the side down is the airflow adjustment lever which feels horribly plasticy. 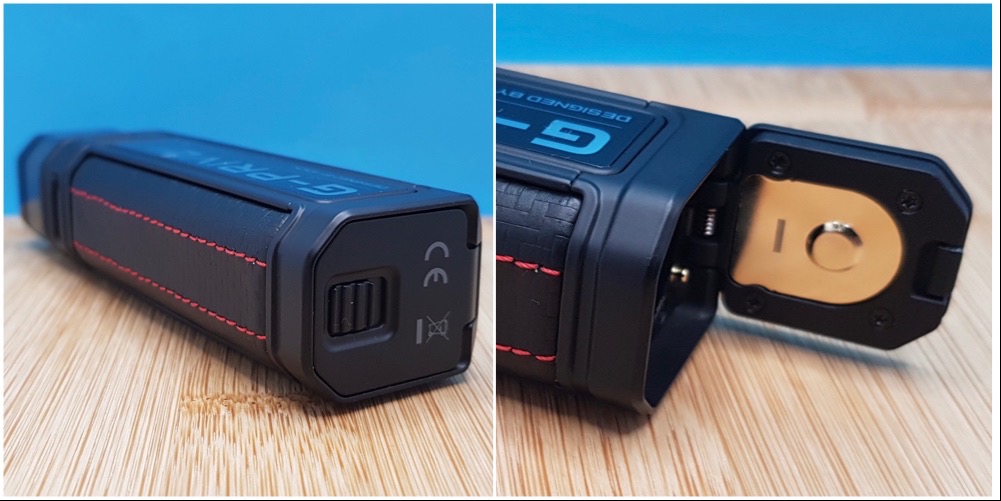 As we’re dealing with the external 18650 battery variant with the G-Priv Pro Pod, there’s a spring loaded battery door concealed on the underside. Once opened, battery polarity is clearly marked on both the battery door and in the bottom of the battery tube itself. I was pleased to find that the catch used is metal so there shouldn’t be issues with this breaking down the line, and it’s held closed firmly in use as well with no worries about it coming open accidentally either.

If you need to charge your battery in the G-Priv Pro Pod itself, then this is done via the USB-C port on the side with a maximum 1.4 amp charge rate which I was able to verify in testing. As always I recommend using an external charger whenever possible, but this is a handy feature to have in a pinch. 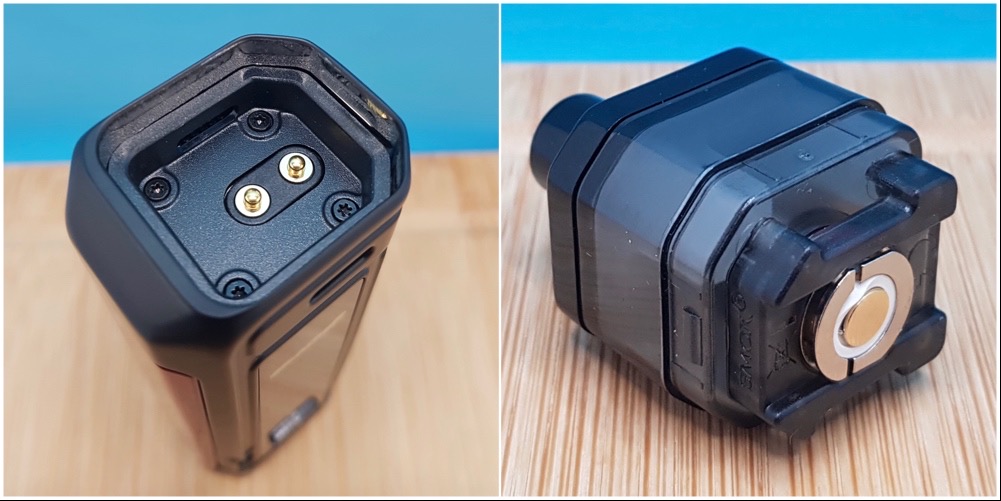 Up top is the recess for the new LP2 Pod which has several small but significant improvements built into its design. The pod uses a simple pressure fit design rather than relying on magnets and snaps into place firmly, obviously over time the plastic lugs could wear down but replacement LP2 Pods are available should that happen. Coils are press fit from the bottom as usual but now feature a triple O-ring design which allows separation of the airflow and the bottom of the pod/coil. This means in practice that the bane of pod mods has been eliminated here, I’ve not had a single drop of condensation or leaking from the bottom of the coil in use and the contact pins have remained bone dry throughout. 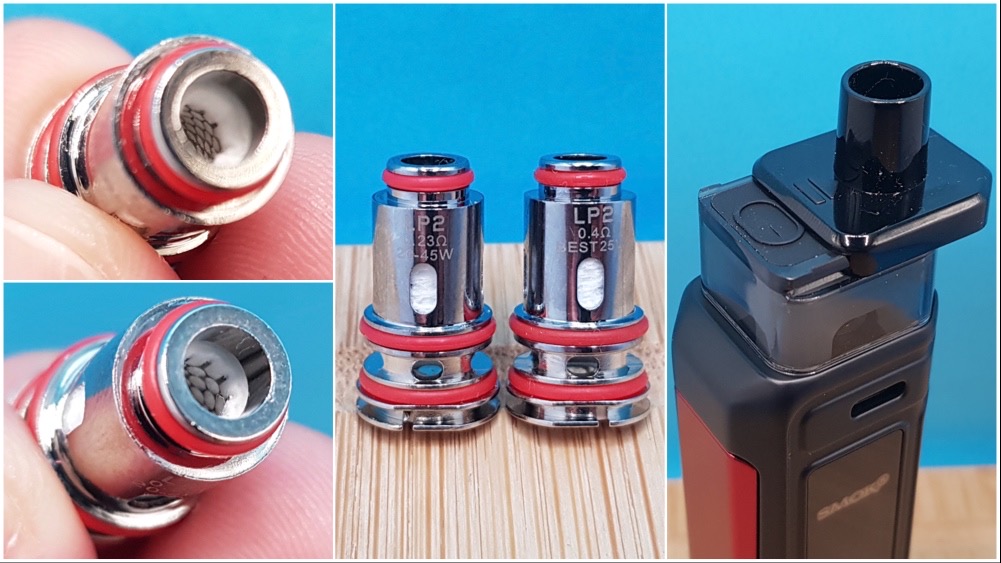 The pod now features a slide to fill system on the top with a sealing gasket over the fill port, this has easily been my favourite aspect of the new LP2 Pod and is something I hope to see on other devices rather than having to remove pods and/or fiddle about with flimsy fill port bungs. As you might expect coming from a UK vendor, the pod came with the dreaded 2ml TPD bung, mine accidentally fell out whilst I was cleaning it (wink, wink) giving me access to the full 5.5ml capacity.

Two coils are included in the box, a 0.25ohm mesh and a 0.4ohm mesh. These are both aimed at a restricted direct lung vape and I have been impressed with both the flavour and coil life, the 0.25ohm coil lasted 10 days before the flavour started to drop off for example. The 0.4ohm coil is slightly more restricted and again gives decent flavour, but the 0.25ohm coil would definitely be my pick here. As is common for SMOK, the coil material isn’t stated, but I did an autopsy on the 0.25ohm coil once I was done and this is magnetic so I’m pretty sure that the coils are Kanthal.

The airflow adjustment goes from a tight restricted direct lung to a fairly restricted direct lung, even fully closed there’s some airflow coming in so don’t expect a great mouth to lung experience here even with the optional 0.6ohm LP2 coils, and the integrated drip tip doesn’t really lend itself to MTL vaping either. If you find that you prefer the older RPM2 Coils, then an optional RPM2 Pod is also available but it wasn’t listed on the TECC website at the time of writing. You will of course lose the separation of the airflow and the bottom of the pod here though so I’d expect to see the condensation problem reappear in this case.

I wasn’t expecting much here if I’m honest, but SMOK have clearly taken stock of what works in a pod mod and put it all together in one neat package. Several apparently minor upgrades when taken as a whole really make this stand out and I think I can safely say that the G-Priv Pro Pod kit is their best pod mod to date. I look forward to seeing what Michelle (Purplefowler) makes of the G-Priv Pod Kit in her review.

Many thanks to The Electronic Cigarette Company (TECC) for sending the G-Priv Pro Pod and G-Priv Pod Kits out for review.