Supplied by Sourcemore for review
https://www.sourcemore.com/rincoe-jellybox-nano-pod-kit.html

Rincoe have continued their quirky Jellybox series with the Jellybox Nano Pod. I have tested the dual battery and single battery version and I just loved both of them for their uniqueness and functionality, but I wasn’t expecting them to have a baby together to produce a Pod daughter. Time to tell if she’s an angel or a little gobby brat….. 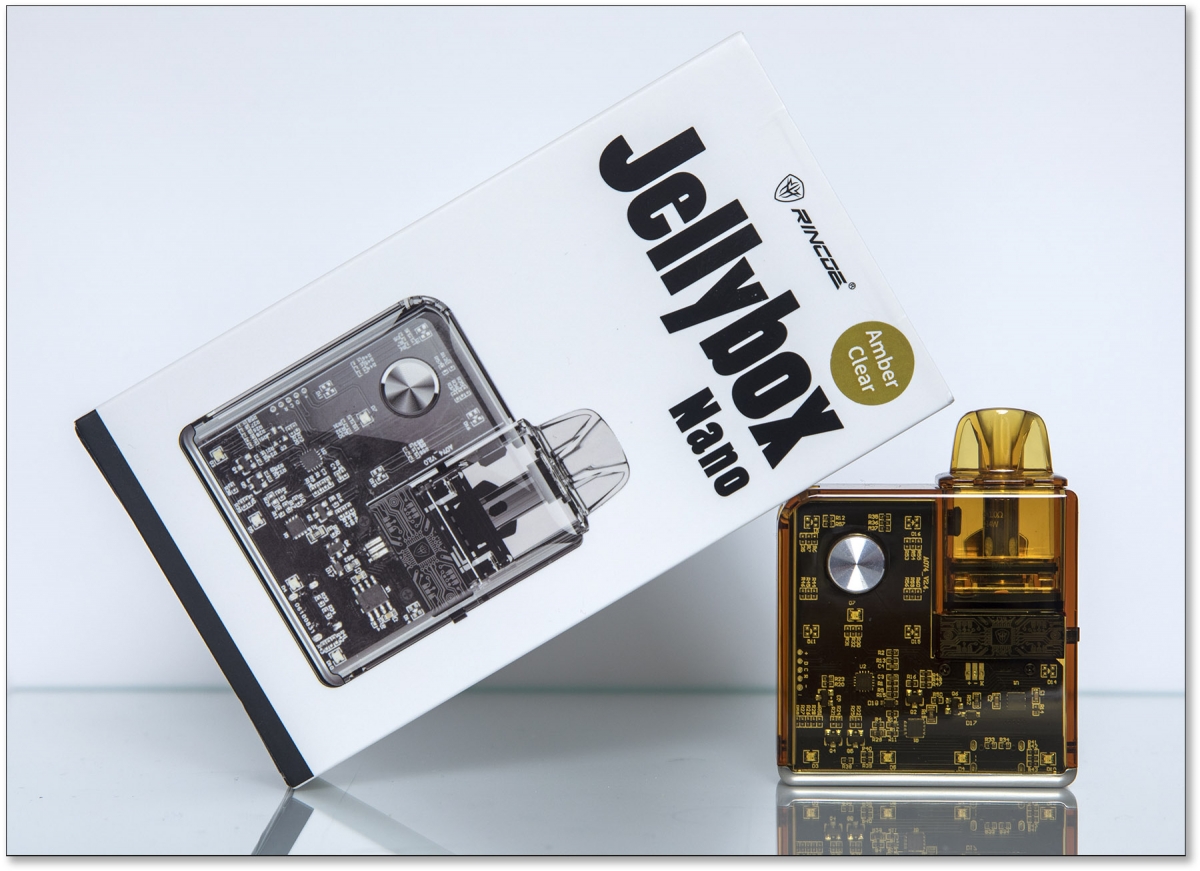 The specs are decent enough but they state “3 LED lights” when there are actually four of them along the bottom (plus one at the fire button), but since she’s just a toddler I will forgive the numeracy. Overall there’s little to no innovation going on here other than the funky transparent styling, but to be fair that goes for the previous Jellybox mods and that didn’t prevent me enjoying them.

The Jellybox Nano comes in quite a large box for a ‘nano’ pod kit, that should be the first clue that it isn’t as ‘nano’ as you would expect. The outer sleeve shows a generic colour photo, and the colour choice is shown on a sticker. 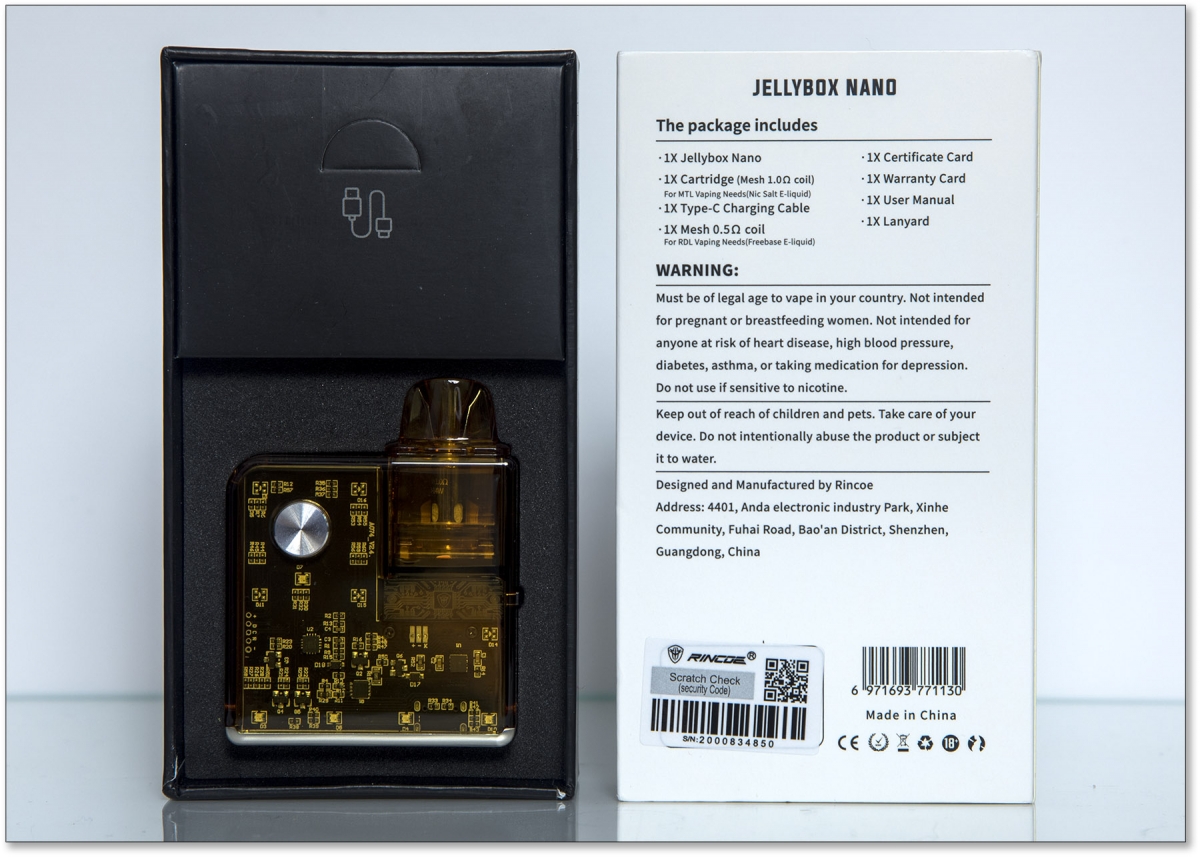 Removing the outer sleeve reveals the Jellybox Nano complete with the pod and a box of accessories above that, it all feels secure and ‘Postie Football’ proof. 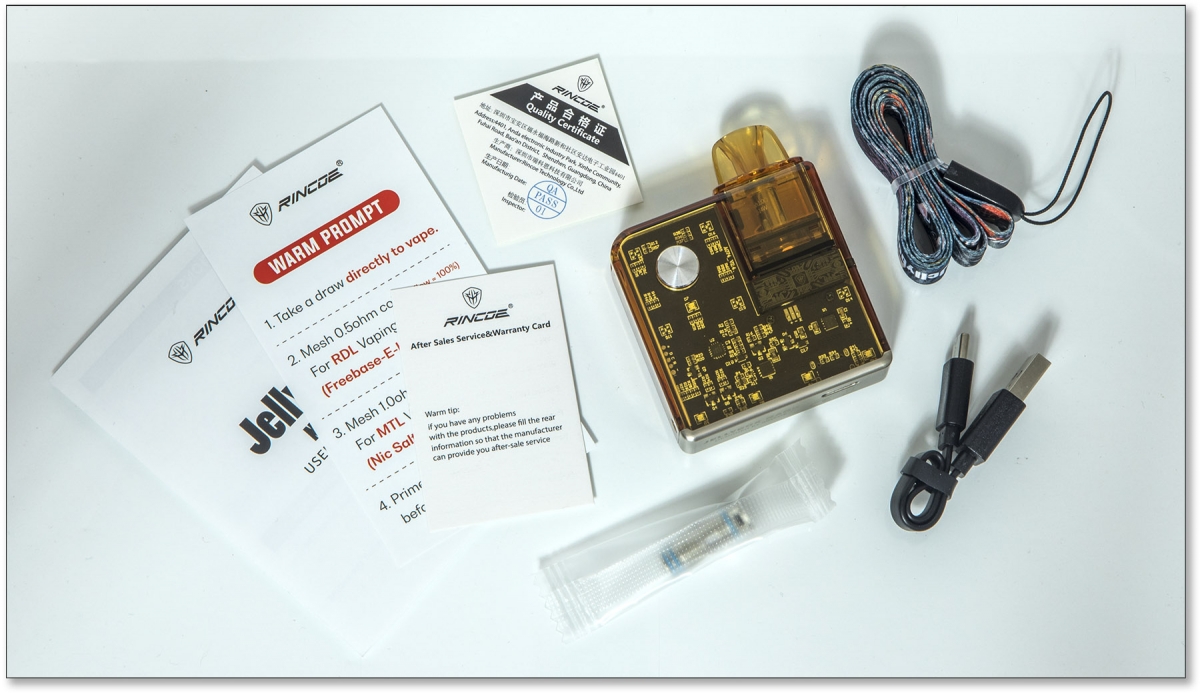 The bundle includes the Jellybox Nano, a pod with a preinstalled coil, an extra coil, an ickle charging cable, an assortment of paper, and a lanyard. The lanyard was very welcome and felt like a bonus.

I’m a sucker for any gadget where you can see the internals and I loved the way Rincoe designed the chipset to be visually appealing, they even spaced out all the components on the board to make it look interesting on both sides. They even wrapped the LiPo battery to match the styling.

The plastic casing is flawless, and everything fits snuggly. I went with the amber version to match my other two mods, I’m not a fan of that Delrin frozen piss colour but Rincoe have gone with amber which is far more pleasing on the eye and less urine-like, I would say it was closer to golden (don’t connect the two to make a golden shower!).

I think the designers had some fun with this one as there’s plenty of visual attention to detail going on, and I think all three colours will look equally as good. The branding is subtle including the Rincoe shield logo which compliments it.

The USB-C port is on the metal base, along with some branding and standards marking. The metal base adds a little something and makes it feel less plastic overall.

The mouthpiece of the pod looks proper ducks-bill like and is really comfortable in the beak… erm I meant mouth! The fire button seems well positioned and is a decent size, it feels clicky and responsive.

There’s one thing that I couldn’t quite get over though; the size is one of the largest basic pods that I have held, especially when you compare it to some of the others. Here it is next to the Uwell KoKo Prime which I considered to be large for a non-screen pod:

Looking at the photo is a little deceptive as it’s more when it's in the hand that you notice. The Jellybox is all squared off so requires a larger hand grip, it’s not one of those pods you could hide in your palm to stealth vape (not that you could ever stealth vape on this as the lights are bright as f**k).

Was the size a deal-breaker? Not at all for me as I ended up really liking it for its size and presence, I guess it felt more like a lightweight all-in-one than a pod and it fits in with the Jellybox series.

The pod is really well made and fits perfectly, there are two little tabs moulded under the duck’s gob to help pull it out. The transparency is crystal clear and it is so easy to see your juice level even when fitted inside.

Changing coils is easy as they are a press fit and they are easy to grip for removing them. I’ve never tried Rincoe coils before but they look familiar, both are well made and the wicking ports look larger enough to keep up while vaping.

There a silicone pull tab on one side of the pod which felt a little flimsy to me, but it was easy to pull open and is held with a round retaining bung so you can pivot it to one side. The filling hole was plenty wide enough to get the teat in and there was enough of a gap to prevent airlocks. It was easy and mess free to fill.

The Jellybox Nano is very basic with no adjustable power settings, the only controls are:

That’s it! For such a complex looking board I was expecting more, such as variable power settings or power button locking as it has auto-draw.

The auto-draw works really well though and there was no power difference between it and using the fire button. I only ever used the fire button to either turn it off or disable the LED.

Pleasingly the airflow adjustment is very effective, there’s a little slider on the side which you slide to expose or close off the airflow port and it’s visual. The little catch is a bit fiddly but once set to your liking, it stays put. It just works! You can get a nice tight MTL up to a decent restricted DL draw, I’m a fussy sod when it comes to airflow but this one impressed me a lot. 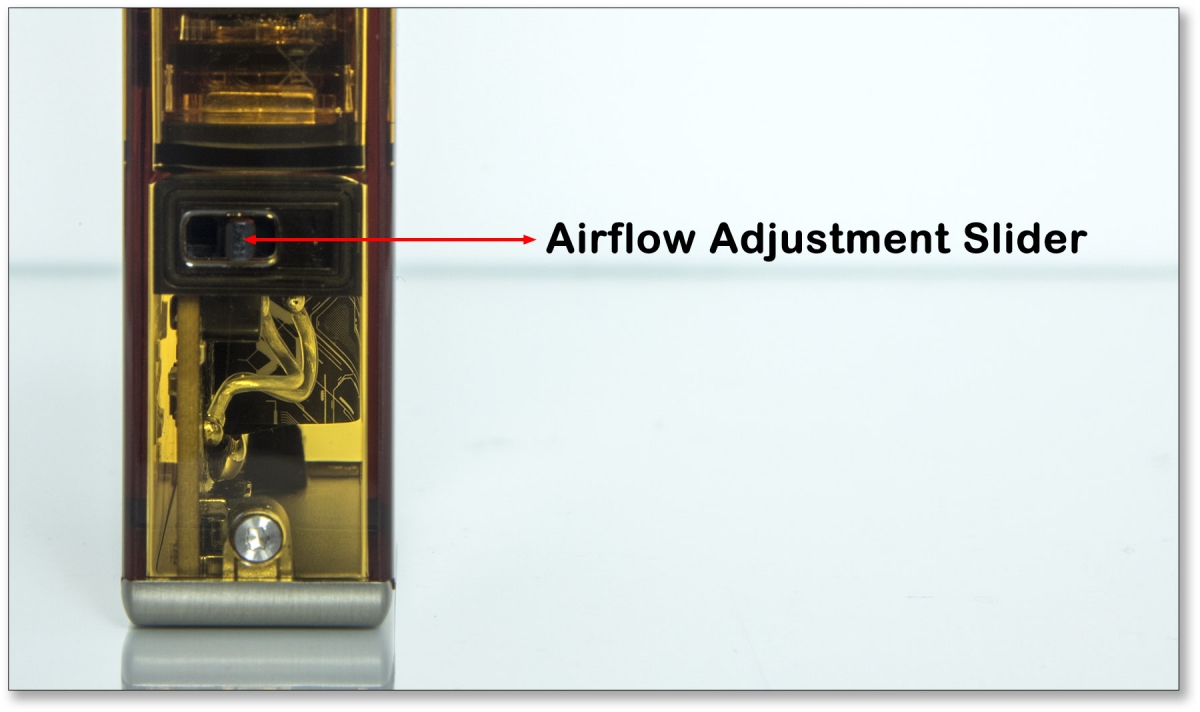 One of the features of the Jellybox range are the cool breathing LEDs, I’m not a huge fan of a lightshow while I’m vaping but they were kind of cool on the bigger mods (Mum and Dad) and were not too bright, but the Nano was a different story. These LEDs are blindingly bright! And depending on which way you hold it up, they can really dazzle your eyes. The pulsing colour change is nice, but I just couldn’t bear the brightness and soon turn them off. However, the fire button LED can’t be turned off and even that is way too bright, you can forget attempting to stealth vape this pod as even your best smothering (I won’t go there!!!!!) will leak light out of your hands. I wish they had diffused them, and eventually I vaped with the light facing downward.

Simply put; one of the very best MTL pod vapes I have used. I really wasn’t expecting it to be so good. I don’t know who makes their coils but they are top notch, the flavour is a 10/10, the airflow is smooth ("as a baby’s bottom" didn’t feel appropriate!), and the airflow adjustment works a charm. The warmth is just right for me, though some might find it a touch too warm, and this is where adjustable power would have come in handy and would have pleased more users that prefer a cooler vape.

I was more than happy with the 1.0ohm coil, it kept up with chain vaping and lasts well, I would compare it to a Caliburn coil.

I went onto test the 0.5ohm coil for RDL (Restrictive Direct Lung), and it performed just as well. The flavour, warmth and fully open airflow gave a really good restrictive hit, and the vapour production was pretty high for such a small coil with a low powered device, somehow the size seemed to fit RDL more (if that makes sense).

I preferred the 1.0ohm coil though as the battery life was much better, and I couldn’t get enough of that superb flavour it gave me. The mouthpiece felt so right, Rincoe have nailed the vape quality.

So far so good regarding any leaking issues, I keep removing the pod to check its nappy, but it is always dry.

Battery life is decent with the 1.0ohm coil and LEDs turned off (though they don’t use very much power) and it lasted me most of a full day. The 0.5ohm struggled to last half a day though. Charging time was good despite it only being 1amp, just over an hour on average, but it’s 1000mah. In normal use I tended to top up charge.

The included lanyard is a nice touch, and the Jellybox Nano is perfectly suitable for round your neck as the weight is light enough, however, the lanyard is almost as bright as the LEDs and is a bit feminine for my tastes, worst case scenario: 0.5ohm coil (big clouds), bright lightshow, and a loud lanyard = LOOK AT ME WAPING!

I’ve since placed it onto a plain lanyard with the LEDs off, and the 1.0ohm coil tones it all down and I don’t feel such a tit (or teat). 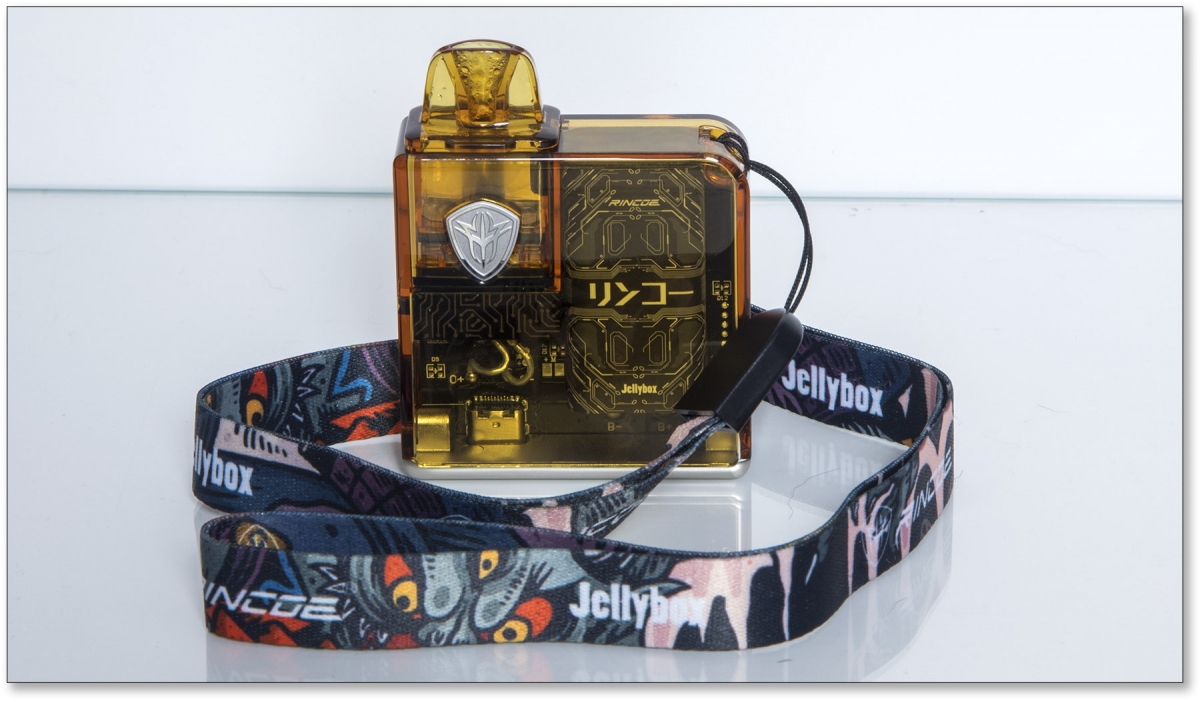 Despite the ‘Close Encounters of the 3rd Kind’ LED lightshow, I really love this kit, the see-through visuals are right up my street and better still, it vapes so damn well. Personally I like the size, and the only con that remains is the bright LEDs, but with the winter nights it could save my life; ‘Be Safe – Be Seen!’ 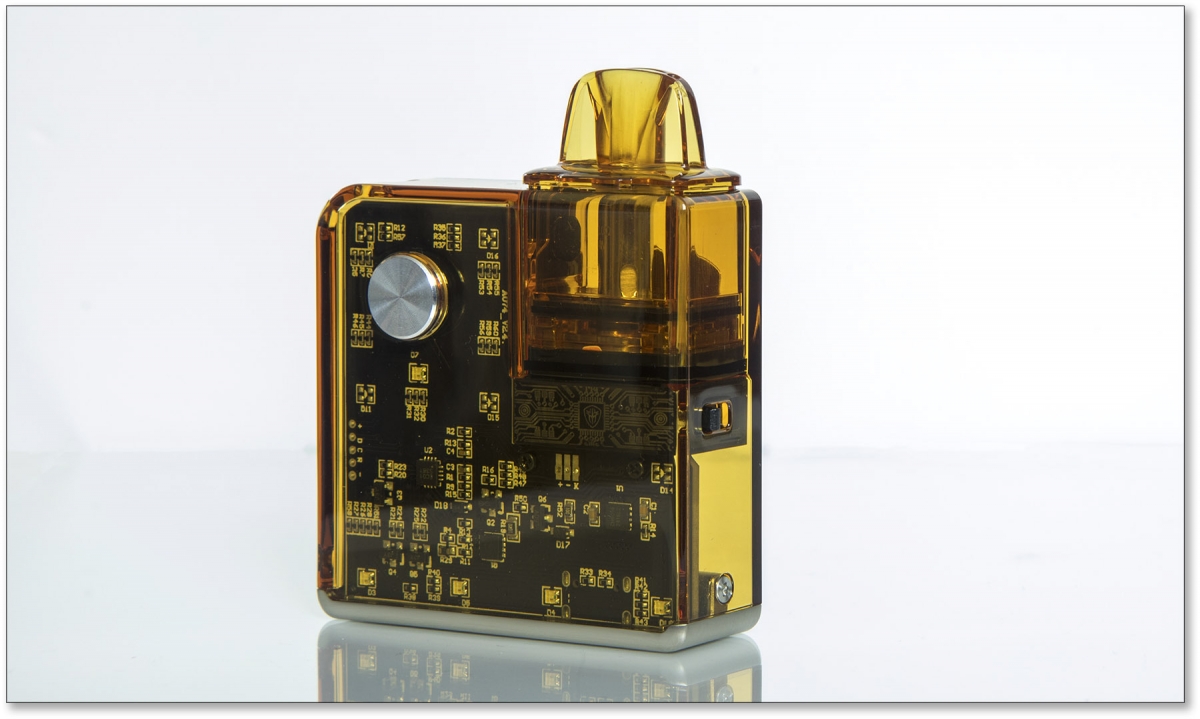