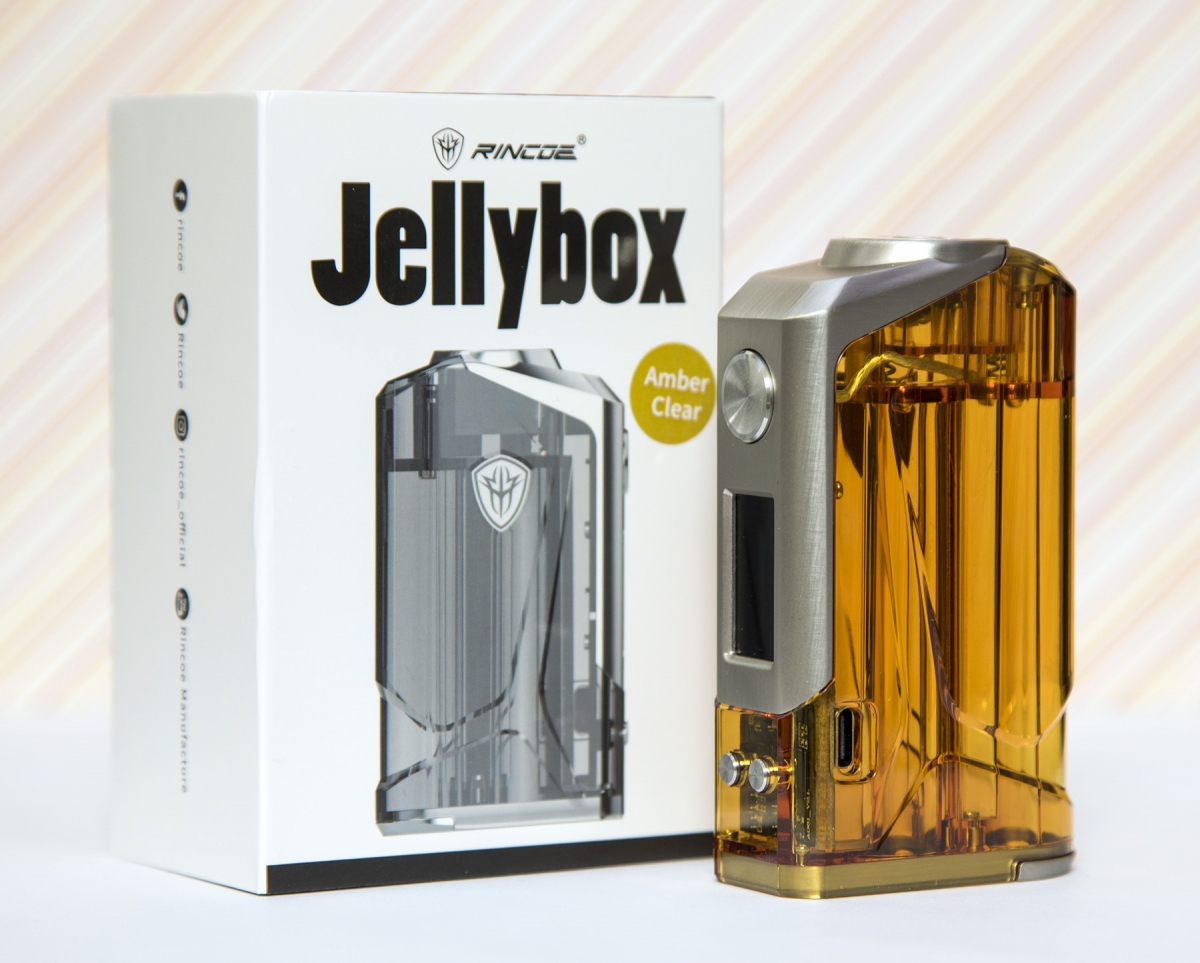 I will try to keep this review nice and short as this is just the mod and not the kit that includes a tank.

Rincoe are a fairly new company in the vaping world but they have already released some nice mods, and their focus seems to be on style and value for money. I’ve seen very little innovation but they have made a place for themselves in the market with their often quirky styling.

The Jellybox 228 TC really appealed to me as soon as I first saw it advertised, I love transparent mods and it appears Rincoe have done a nice stylish job on this, shame about the name though, sounds a bit childish to me.

Bearing in mind that Rincoe aim to keep their products at a low price, I wasn’t expecting too much with their packaging. To be fair it was pretty good and minimal (in a good way to reduce waste). 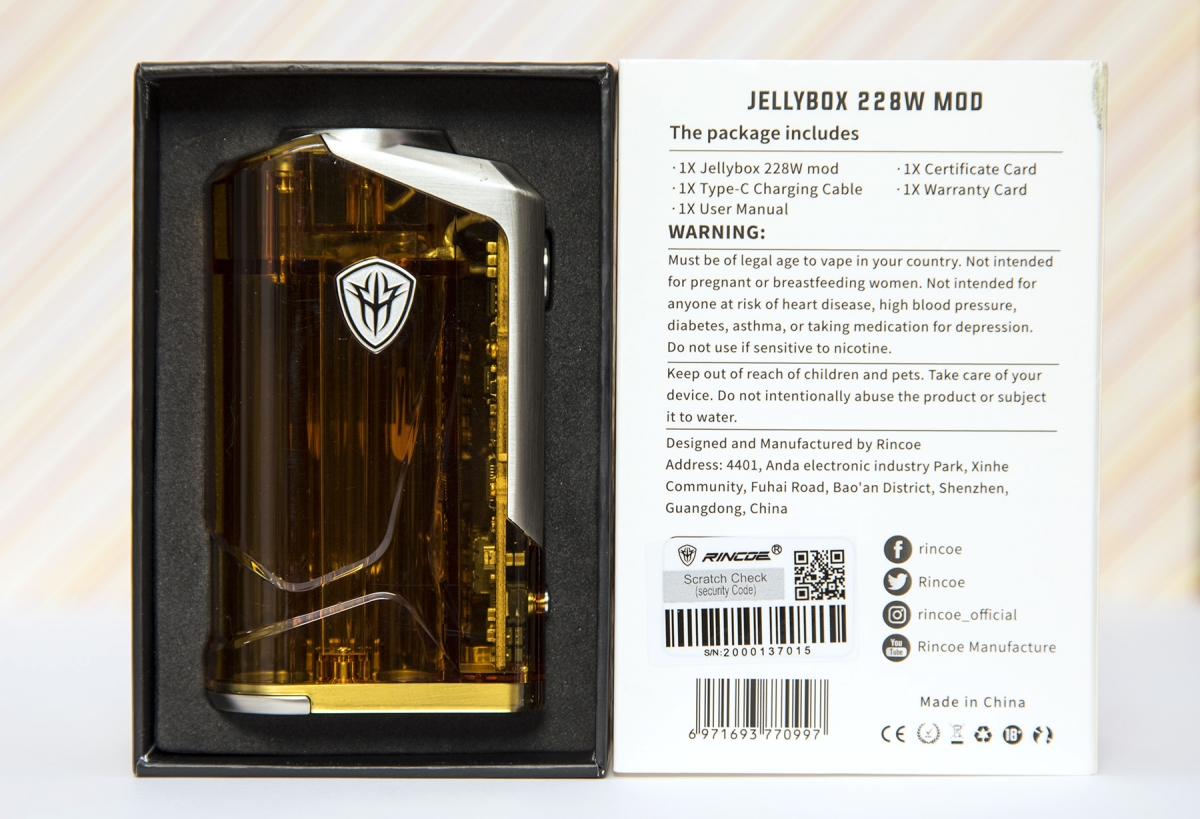 It has an open box with an outer sleeve, the mod is displayed on the top layer with the bits of paper and the usb-C cable in the bottom layer. 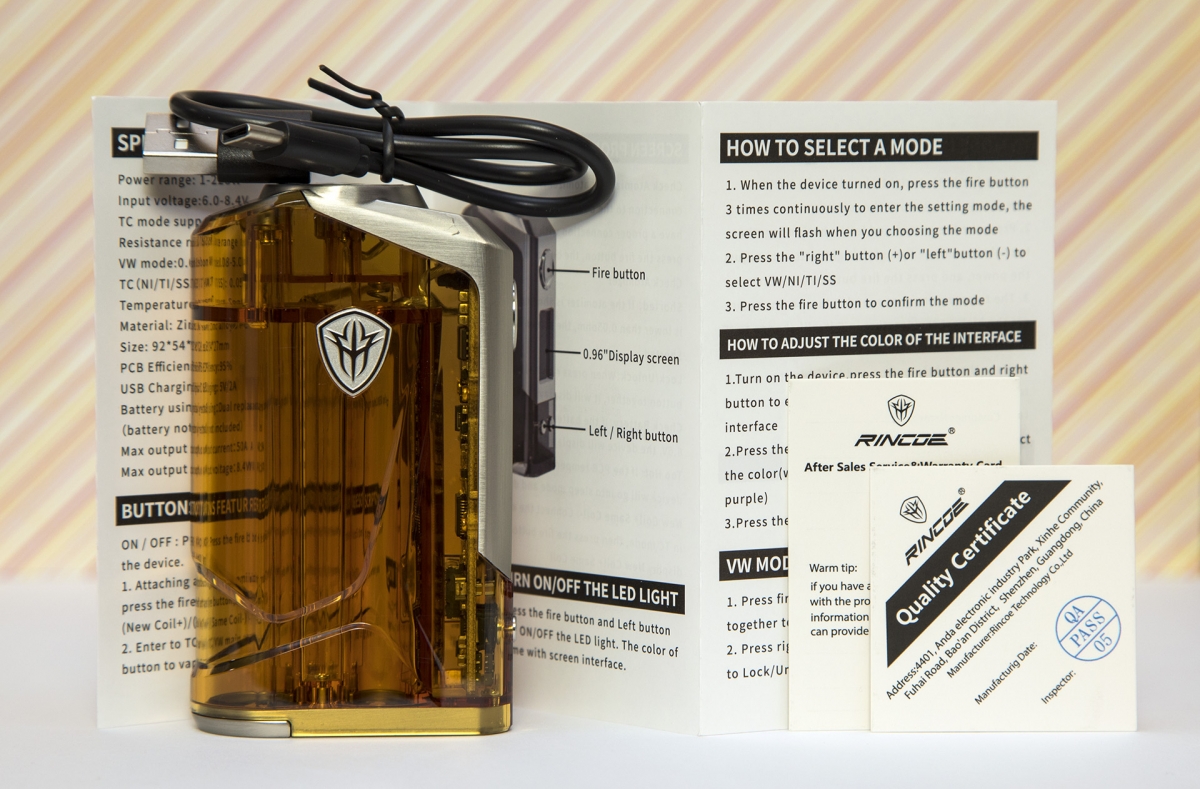 It’s only when you pop the batteries in and fit a tank onto the Jellybox that you really appreciate it, out of the box it is really lightweight but feels nice and sturdy. 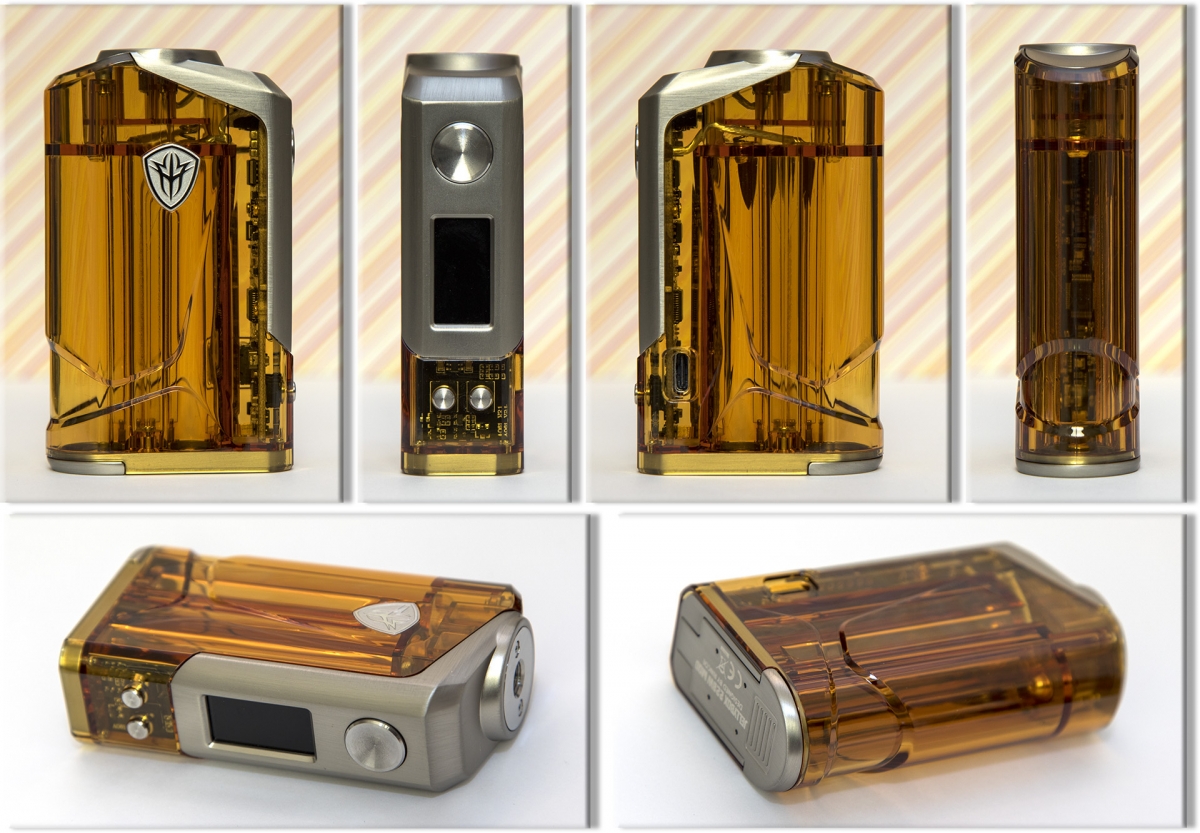 They have got the ergonomics just right, it feels so natural in the hand and there are no uncomfortable hard edges, and the recessed styling also add to the grip.

The branding is very minimal which is something I appreciate on a transparent mod, I also like the balance of the metal parts which add extra rigidity and look nicely styled.

The battery door is a little wobbly when open but firm when closed, it locks itself onto metal so I can’t see it coming loose with wear and tear.

As previously mentioned, with 2 x 18650 batteries and a tank fitted, the Jellybox starts to really click into place. I loved the overall looks of it completed and it felt even better to hold, the weight feels just right and the ergonomics feel better too. The fire button is intuitively placed for index finger firing, and the adjustment buttons don’t get in the way so I doubt accidental changes will be an issue for you.

The Jellybox is pretty basic and most users won’t wander passed the default VW (Variable Wattage). It has three TC (Temperature Control) options: NI, TI and SS in either Fahrenheit or Celsius, but there are no fine tuning options so I doubt I will ever use it for temperature control. Adjustment are slow to scroll through, but it does round robin in all modes.

The screen is nice and bright, everything is clear and easy to read. You can change the colour scheme which also changes the colour of the LEDs to suit the theme, I like that it keeps one colour as changing to multicolour would have been a touch annoying for me.

The LEDs only light up while vaping and are pretty bright. Though there’s six LEDs, they are positioned in a way where you only see the effect of three but brighter. I enjoyed vaping with the LEDs, especially outdoors at night, clouds and lights go well together. I’m happy to amuse my little mind on my own in my garden but I would likely turn the LEDs off in public, at least you have both options. 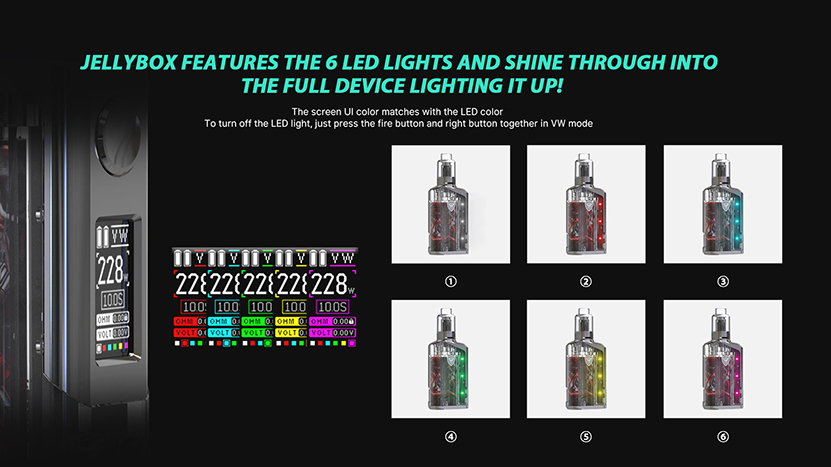 That’s everything you need to know.

The Jellybox comes in three colours.

I chose the amber as I have a Lost Vape Drone BF in the same transparent colour. The amber looks really good and is a far cry from that horrible ‘frozen piss’ ultem style (in my bias opinion).

The clear would be my second choice but all three look pretty good to me. The satin finish metal contrasts well and is easy to match up an SS or silver tank or RDA.

There’s also full kits available as well as a single battery version which are also stocked by Sourcemore. I fancy getting my hands on a single cell one next as I’m really enjoying this mod.

Battery life is pretty good considering the bright screen and LEDs, it easily lasted me a day and some. Charging can be done via the usb-C port and offers 2 Amp fast charging, but I always charge my batteries outside the mod in a dedicated charger.

Performance wise, I only used it in VW mode. It fired very fast and I noticed no lag, there’s very little to say here except that it does what It’s supposed to. There was simply nothing that annoyed me and it was a joy to use. 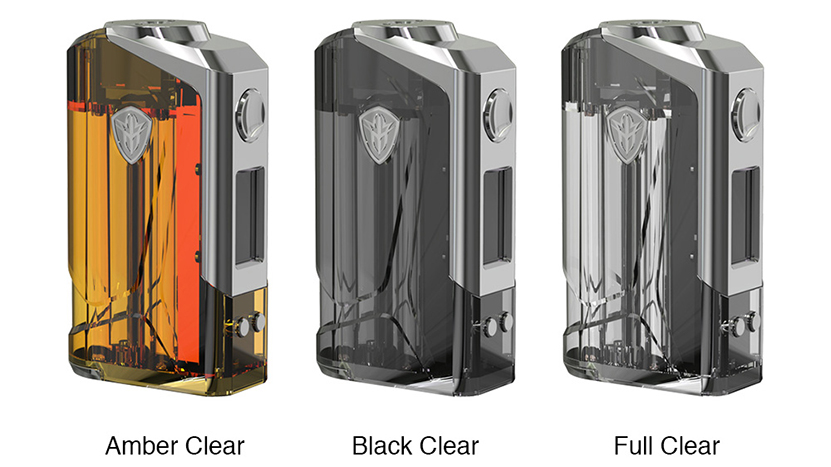 For the price of this cracking mod, I think it’s a billy bargain. Advanced users will find it lacking but I consider myself one such user and I have plenty of other capable mods for when I want to use TC or pre-heat for example. I wouldn’t use this mod for TC due to its lack of refinements and no TCR, but I am more than happy using this in wattage only and using a mesh RTA or stock coil tank, the lack of pre-heat settings isn’t an issue.

Looks over substance perhaps, but it looks and feels so damn good that I don’t care, it’s a joy to use.

The single con isn’t a con for me as I’m very happy with it in VW only and I very much doubt new users will care either.

Let me make this clear (ba-dum), the Jellybox is an absolute steal if you like the looks of it. The gimmicky LEDs can be turned off it that turns you off. If you don’t find this mod value for money, then I will eat my cat. 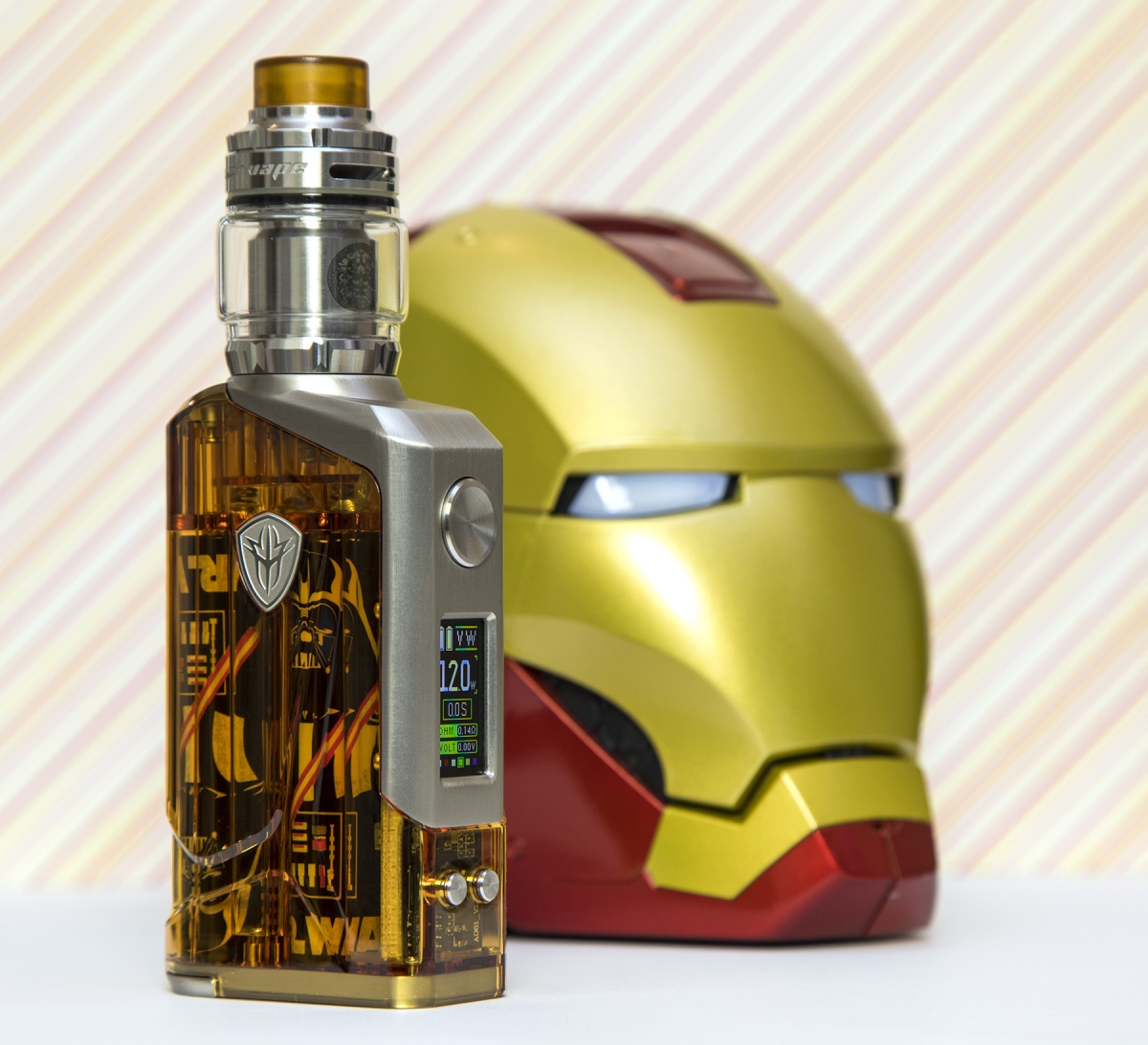