RELX got in touch to ask if we’d be interested in taking a look at their new prefilled pod kit, the RELX Infinity. I grew quite fond of the RELX classic kit I reviewed back in February this year, so I was more than happy to give this a test drive. So let’s dive down and take a look at what’s on offer this time around. 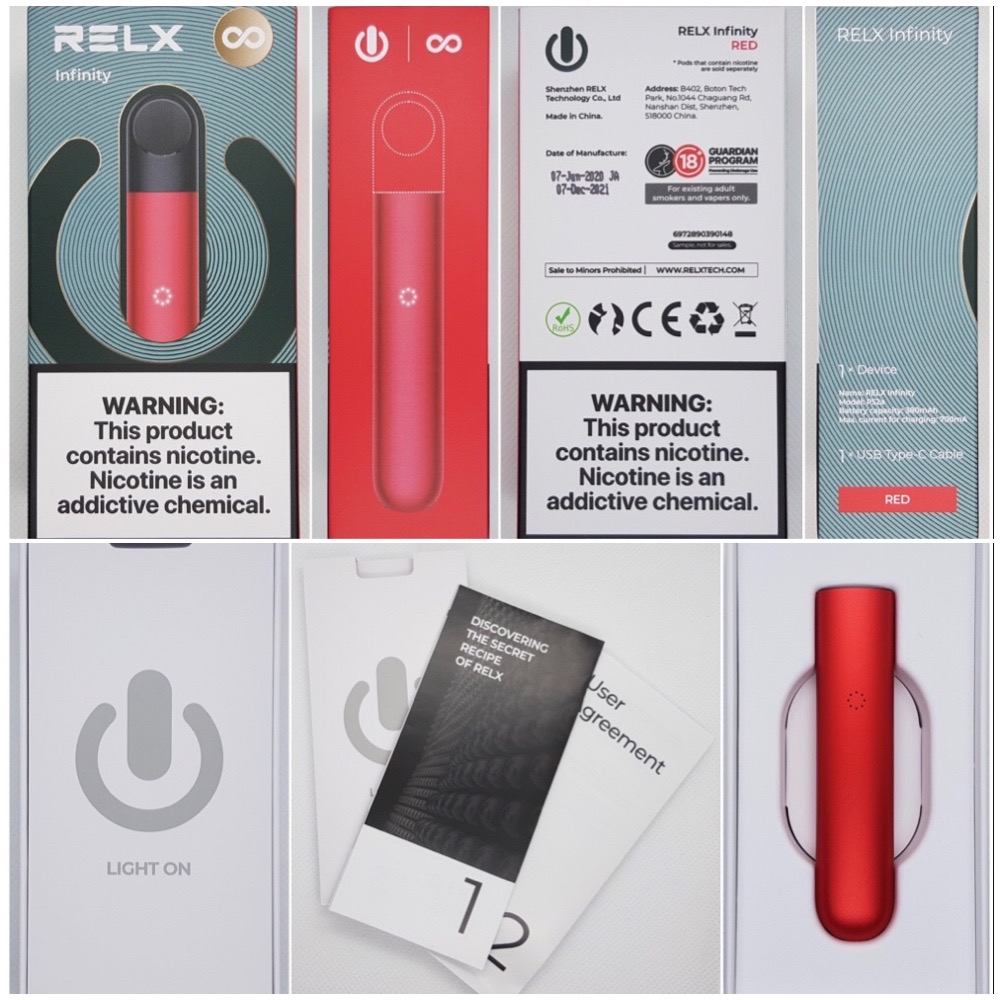 The Infinity itself comes in a small box with an outer sleeve. Remove this and you’re greeted with an envelope with some simple documentation under which is the Infinity battery. Finally there’s a usb-c charge cable hidden under the battery. There is no pod included, those are prefilled affairs which come separately so remember to order some at the same time! Whilst it may seem stingy that you don’t get a pod included in the box, this does mean you don’t end up with a flavour you don’t like (tobacco or menthol are typical with this sort of device). The lack of an included pod also means the Infinity is just £19.90 here in the U.K. which is about the cost of two packs of the cheapest cigarettes available for sale.

The Infinity battery follows a typical design common to these beginner kits, with RELX screen printed on one side, a led indicator on the other, a usb-c charge port and pogo charge pins on the bottom and a recess in the top with contacts for the pod and a draw activation tube. There are two small air intake pinholes on the sides and this is all finished off in an anodised aluminium shell which is available in black, silver and red. Even with a pod installed, it’s just 112mm tall, 19mm wide and 10mm deep and weighs in at a feather light 25.5grams.

There are a couple of nice design features including a vibrate function which will activate when you insert a pod or if you take 15 puffs, the approximate number of puffs of a typical cigarette. Those two tiny little air inlets coupled with the design of the pods mean that this is a proper “old school” mouth to lung vape, you won’t be winning any cloud comps here but it should provide a comfortable and familiar experience to a new vaper and I found the draw activation to be fast and reliable. 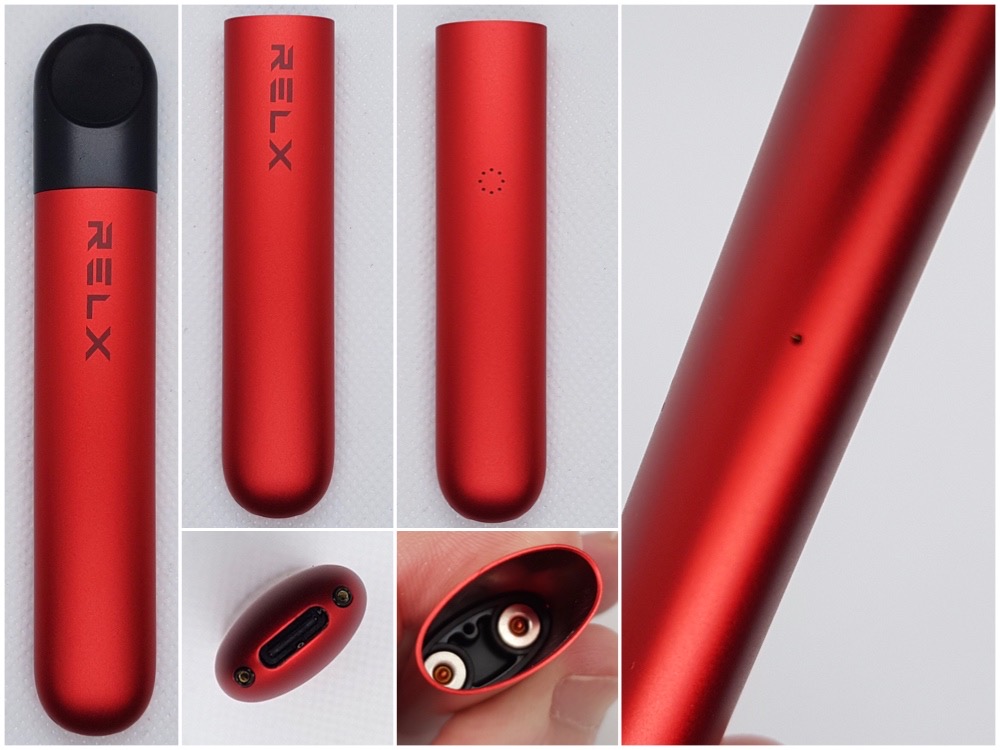 It’s fairly light on power, I recorded a peak charge rate of 0.64amps with 382mAh capacity in just 42 minutes. Vape whilst charging is also supported. This is strictly a mouth to lung device so you don’t need bags of power, but there are also optional portable charge cases (PCC) available should you want more battery life (more on those later).

The Infinity uses the RELX pod pro system. These come in packs of one or two with manufacture and expiry dates clearly printed on the back. Each pod is contained in a sealed blister pack along with a protective cover on the bottom and silicone plugs top and bottom to reduce leaking in transit or storage which you will need to remove before use. The RELX pod pro utilises FeelM coil technology with its 11 layer leak free maze design which should eliminate leaky pods. If you’re wondering about the QR code, well that takes you to an authentication check…apparently fake pods are a thing! It should also be noted that the pods are fairly darkly tinted, you’ll need to hold it up to the light to see how much eliquid you have left.

Pods are available in a range of flavours and strengths, mine were sent from the international office so I got some non-TPD compliant 30 and 50mg pods. Here in the U.K. they appear to only be available in two packs with a 20mg strength. Coming in at £7.99 a pack, these aren’t cheap but are in line with similar systems.  RELX sent out several Pods for me to try with the Infinity, including a couple that don’t seem to be available in the current U.K. lineup. Below is a brief description of the ones that are available here: 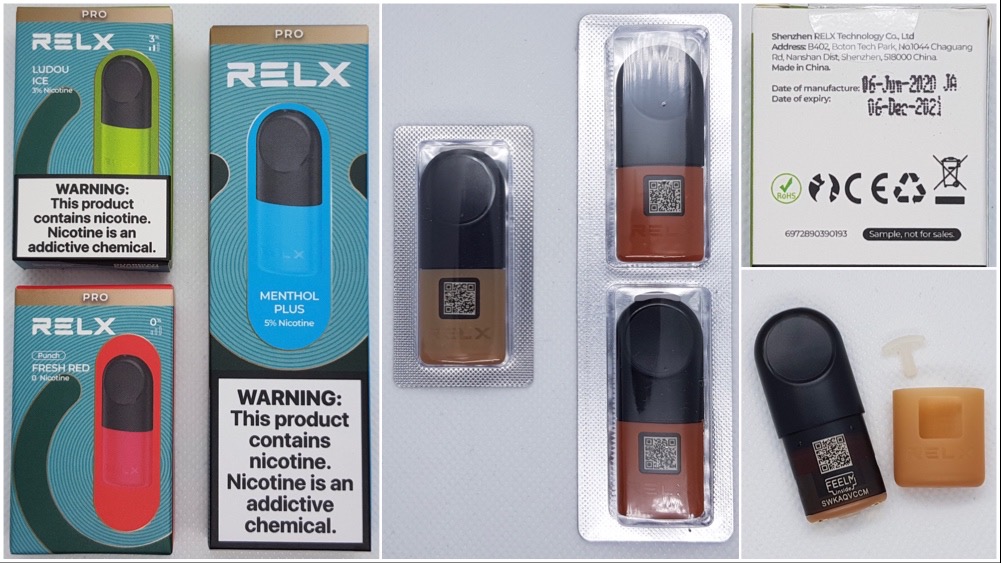 I’m not a fan of tobacco vapes but this one caught me by surprise, a rich smooth virginia tobacco with a hint of caramel. I could actually vape this where a lot of prefilled tobacco pods would be headed straight for the bin.

I’d say this is more of a subtle fresh wild mint flavour rather than a full blown in your face menthol. Whilst I like the flavour, there’s something in here that doesn’t agree with me at all, I ended up with sneezing fits every time I used this. You’re unlikely to suffer the same problem though and it’s a very relaxing vape.

This is a mung bean flavour which several reps at the vaper expo back in October last year would have me believe is actually one of the most popular flavours in the East Asian market. It’s difficult to describe from a western standpoint, there’s a slight “earthy” quality to it on the inhale and a hint of cooling on the exhale that takes a bit of getting used to. Having reviewed the RELX classic kit, I have had this before and gotten accustomed to it but it’s definitely an acquired taste.

Fruity purple grapes with a slight hint of candy, a bit like a chewy soft fruit sweet.

A really tangy red watermelon with a koolada hit on the end. Really fruity and refreshing vape but the cooling element does tend to overtake the watermelon after a while.

Raspberry with a slightly creamy edge. A fairly mild flavour for those of you who don’t like overly strong flavours, I found it a little bland though.

Perhaps what you’d expect from the name a fizzy cola. Tastes just like a cola bottle sweet and a firm favourite from the U.K. lineup. 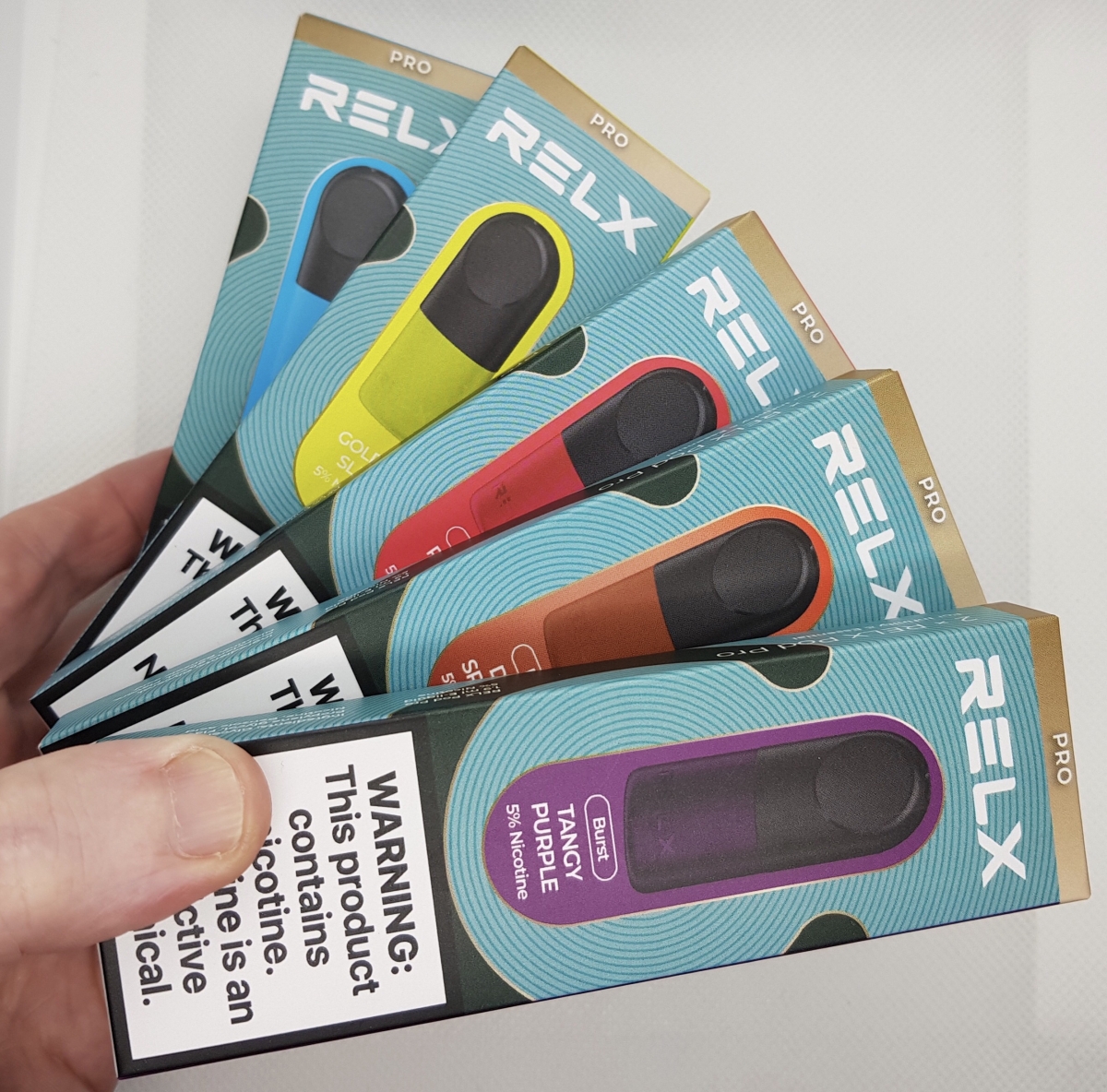 RELX also sent out the optional PCCs with the Infinity kit for me to try. There are two available, a smaller 1000mAh PCC in white, and a 1500mAh PCC in black/gold. Both hold the Infinity in a tray with two pogo pins which charge your battery and promise several days of use between charges.

These are simple to use, pop your Infinity in and it will begin charging. You’ll get a familiar vibration from the Infinity itself to let you know it’s charging, and if you place it led side up you can also see this through the top of the case although it will still charge if you place it in the other way around as well.

Both are a largely plastic construction but feel well made and fit snuggly inside a pocket. I preferred the 1500mAh variety as it’s a little slimmer and fits into a pocket more comfortably, and I did get around three days' use between charges.

Charging is through a usb-c port. I tested the 1500mAh PCC and recorded a peak charge rate of about 1amp with a 1300mAh capacity recorded in about 1 hour and 40 minutes.

I was only able to find pricing on the 1000mAh PCC which was a not unreasonable £19.90. The 1500mAh version doesn’t seem to be available yet and the review sample came in Chinese packaging. I’d expect this to be a little more expensive than the smaller unit but still be competitively priced. 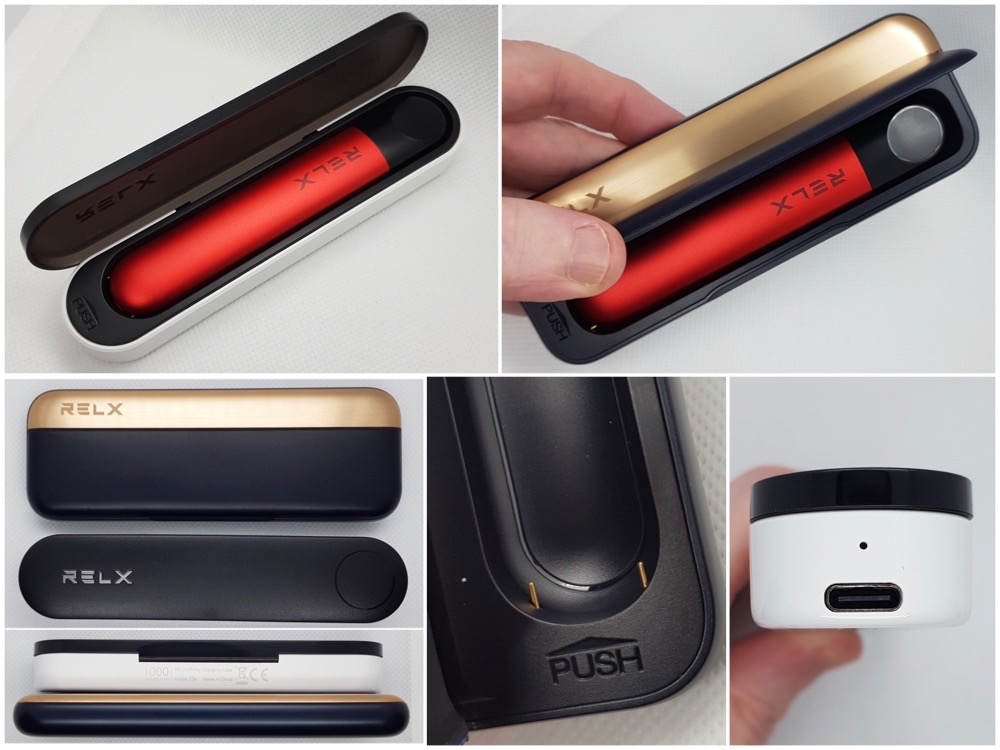 Some people don’t want to mess around with tanks, coils and bottles of eliquid… they just want something that works with the minimal amount of fuss and effort, and RELX have once again achieved this with the Infinity kit. This is a perfect place to start from if you’re a current smoker and want something simple and relatively inexpensive to try out. The pre-filled pods come in a variety of flavours so you should find something you like in the range, and the FeelM technology used in the pods gives a decent flavour representation and wicks well. I enjoyed using the charging cases as well as they give you literally days of use between charges, a very handy feature.

Thanks to RELX for sending the Infinity kit out for review. 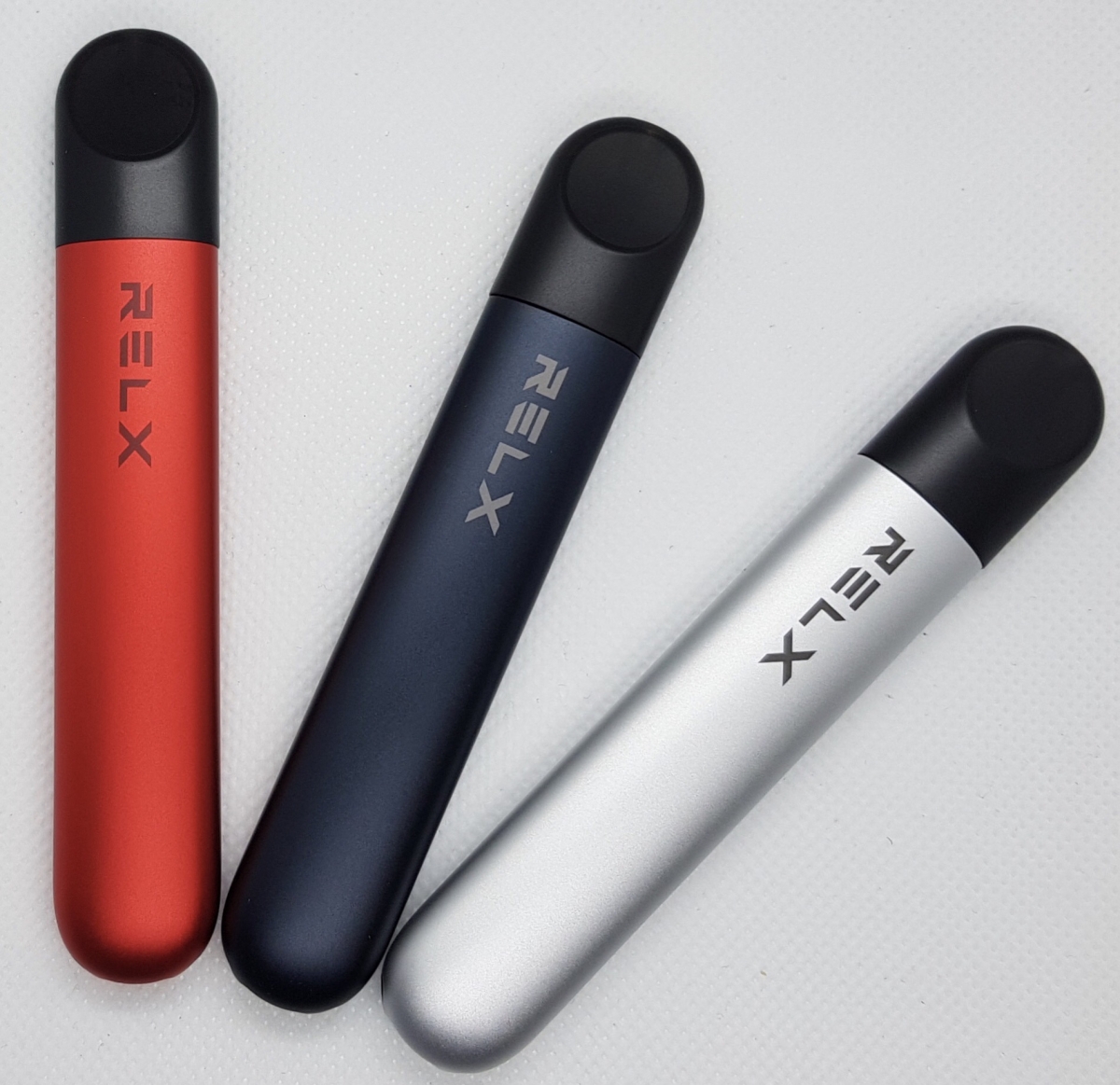