Lost Vape was established in 2014 by Frank Guo to create and sustain a healthy vaping culture for millions of vaping enthusiasts across the globe. They have continued to strive to bring a varied selection of products to the market but are probably most well known for their DNA devices such as the Therion, Paranormal, Centaurus DNA250C, and Orion Plus/Go. Recently releasing a range called Quest, today we are taking a look at the latest offering from that range The Thelema.

The kit comes packaged in a nice, clean looking white box with a protective sleeve over it. On the front, it shows a picture of your chosen device and some features about the kit, and on the rear it lists the contents, some warnings and has the usual scratch and scan authentication code. In the box you will get the Thelema device with a pod and coil already installed (a plastic tab to keep it from firing), a spare coil, a bag of O-rings, two drip tip options (MTL and DTL) which is really nice, a usb Type-C cable, a user manual and warranty card.

The Thelema is available in three styles (UKIRAN leather, glossy leather and grain leather), and nine different colours. I was sent the SS/glossy leather for review which looks very classy. 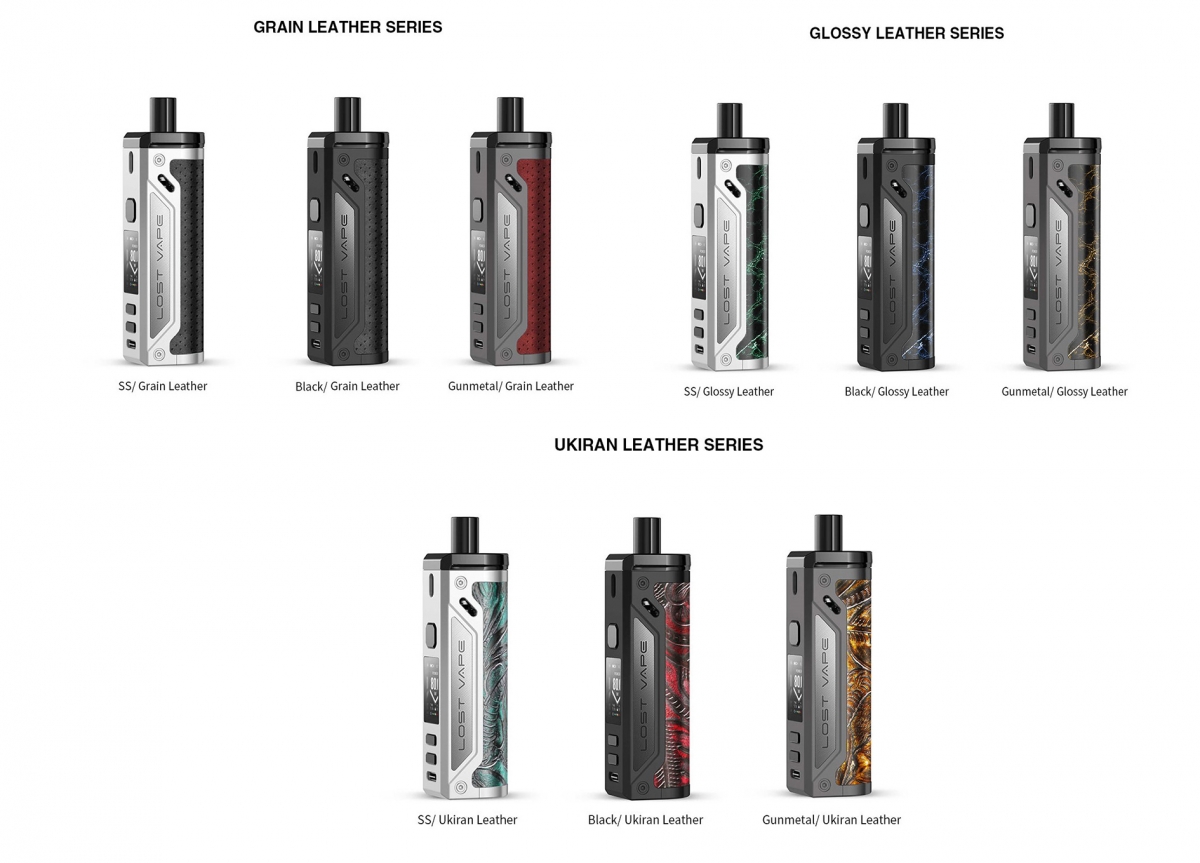 You can tell that the Thelema was manufactured by Lost Vape. The build quality feels far better than the majority of other pod devices out there, it has some reassuring weight to it, approximately 150g. Its size is a well balanced 101x35x30mm. The device is made up of a zinc alloy shell, a nice padded genuine leather back panel, three operation buttons, 0.96” TFT colour display, usb-C port, and a dark plastic pod made from high grade PCTG plastic to prevent shattering with some juices. It features a 3000mAh internal battery, 5-80W power range with 0.5W increments when adjusting, and a supported coil resistance range of 0.12ohms to 5.0ohms. The usb-C port supports 2A fast charging and will charge from flat, to full, in about 60 minutes.

The pod is well built and snaps securely into place with four small magnets staying firm once installed, and has a liquid capacity of 4ml. To fill the pod, simply unplug the bung which is a nice secure fit from the pod and fill. The bung is marked with the word Oiling, however this is only on the tester versions and Lost Vape have assured me that the final versions will be changed to OPEN.

On the front of the device, you will find a small juice window just above the fire button, a 0.96” TFT display, +/- adjustment buttons which are nice responsive and clicky, with the USB-C port at the base. It looks very smart, nothing feels cluttered. However unless you are in a bright environment, it is very hard to see the juice level.

The 0.96” TFT colour display looks fantastic, and there’s six colour options available should you wish to customise the look of the menu, which is simply done by holding the power/+ button together. The colours available are purple, blue, yellow, white, red, and green. The menu layout on the screen is simple, and displays your battery level, coil resistance, wattage setting, puff time, puff count and the current colour display you have it set to.

On either side of the device is a small angled vertical slit, about 3mm in width and 8mm in length, which are the air intakes. There is a  panel displaying THELEMA on the left hand side, and LOST VAPE on the right hand side. The Thelema not only looks like a premium device, it also feels like one. It just moulds into your hand with the padded leather grip making it very comfortable indeed. At the base of the device is what looks like a sliding battery door with vent holes, but in fact it is sealed with no access being that it is an inbuilt battery device.

The Thelema uses the same family of Ultra Boost coils as the Orion Q Ultra, with five coils available to choose from and an RBA head also available. The Thelema adopts a plug-and-play coil system, with a removable airflow adjustment ring which screws onto the base of each coil. This ring is adjustable by a simple twist, allowing you to restrict or open the air intake at the base of the coil.

0.2Ohm M4 mesh - This coil has a wattage range of 40-60W. I decided to run this at its maximum of 60W to see how long the coil would last with the airflow ring adjusted to wide open. Flavour was very good, and the clouds produced were nice and dense. This coil went through liquid quickly, and I found myself refilling once every three to four hours. At around my 6th refill, there had become a noticeable reduction in flavour. As this works out to approximately 24ml of liquid through the coil, the lifespan of the M4 coil is average when used at maximum power. Battery life with this coil was acceptable, but I had to recharge the device twice per day.

RBA head - The RBA kit includes the RBA head, spare screws, spare o- rings, a couple of spaced round wire coils, some cotton allen key and a 510 adapter that allowing you too dry fire and install your coil before plugging the coil head into the pod. After installing one of the round wire coils included, it came out at approximately 0.6Ohm after a dry firing and wicking. As is the case with any tiny RBA head, building is extremely fiddly, especially with my eyes. You don’t need much cotton to fill the wicking ports. After a couple of attempts, I managed to nail the wicking, but using the RBA head does not allow you to use the airflow adjustment ring so I had to settle for the medium restriction DL vape. At 30W, the flavour production was good, and juice consumption was far less than that of the included coil heads and battery life was much better. 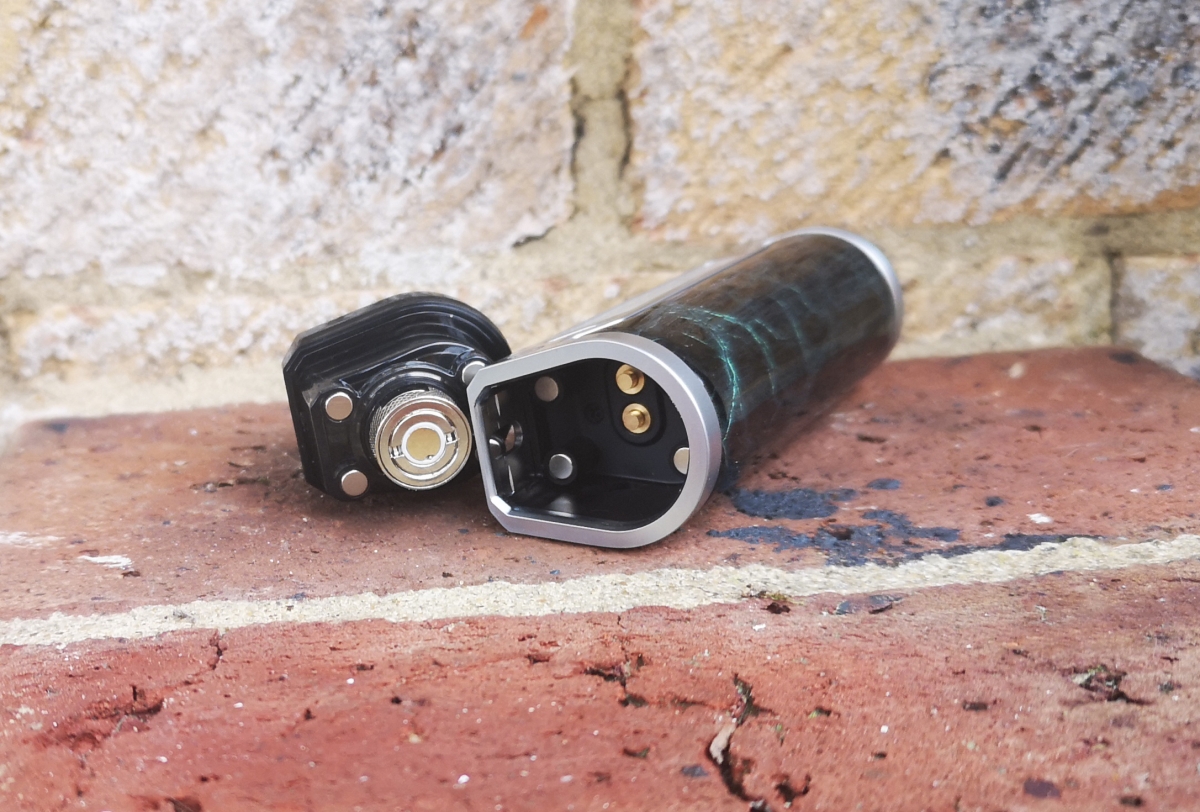 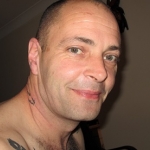 Article by Rob Johnson
I have now been ciggie free for just over 2 years feel a lot healthier! I'm more active and honestly i dont even think about smoking any more. I think with me, it's a case of having the hand actions and blowing out the vapour. In fact, it's been so easy, I wish I'd tried it years ago!