The Lost Vape Orion line of pod kits have been a popular staple over the last couple of years, however I must confess that these have passed me by in the past as I wasn’t really into mouth to lung vaping at the height of their popularity. Lost Vape recently released a new entry into the lineup with the Orion Mini so I thought it was high time to see what I’ve been missing out on, and our friends over at Healthcabin were kind enough to send one over for review. 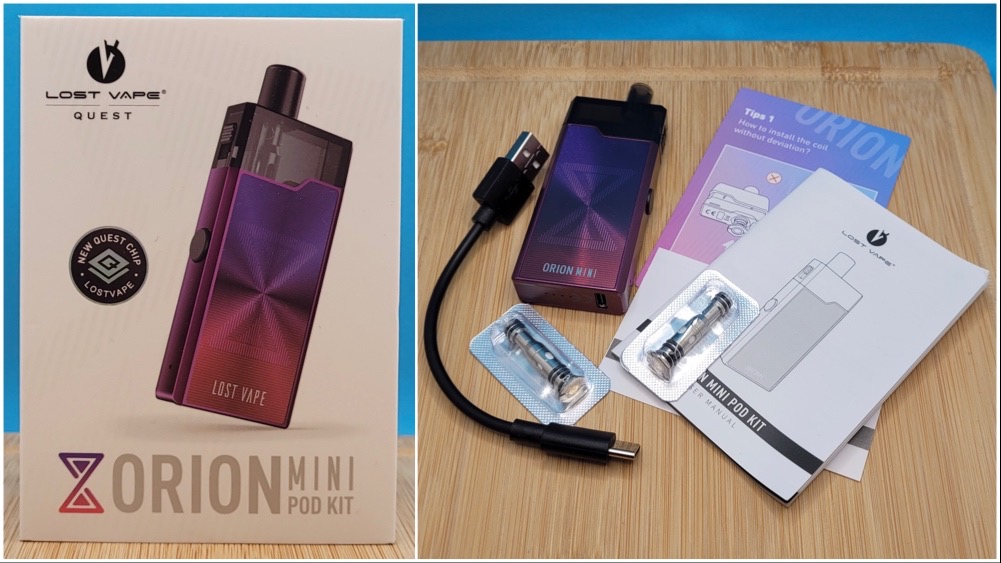 The Lost Vape Orion Mini comes in ten different colours, and I was sent the “Phantom Purple” one to test. This has an anodised main chassis with colourful side panels that refract the light as you twist it around. Some of the wood grain finishes look particularly nice as well and remind me of old 1970’s era stereo, very funky!

You get two of the newly developed UB Mini coils included in the box, one of each of the available options, so you get to try both of them out to see which one suits you best before committing to ordering any more coils which is always a plus. A short USB-C charge cable is also included along with some basic documentation. 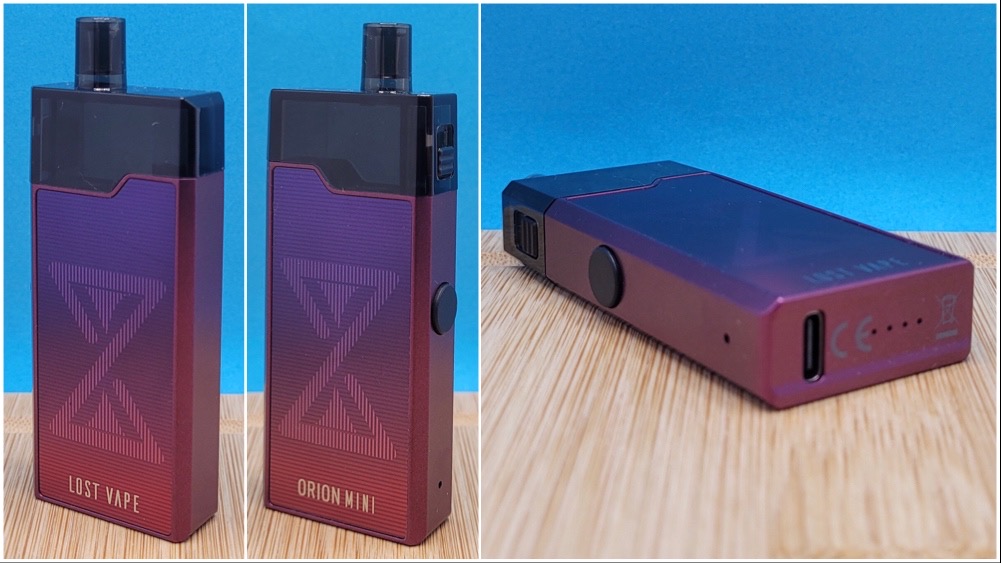 Externally the Orion Mini looks similar to earlier versions of the Orion family with a slim angular design and just one button. The corners have a forty five degree bezel with a softly rounded finish which means that it doesn’t cut into your hands and whilst it’s light enough to comfortably fit in a pocket at just 67 grams, it feels heavier than you might expect for something of this size due to the zinc alloy used for the main chassis. As I’ve come to expect from Lost Vape, the Orion Mini feels well put together, and that anodised finish feels like it will go the distance.

There’s just a single plastic button down one spine of the device along with a small led power indicator. This follows the familiar five clicks on/off approach but sadly with no adjustable power levels, this makes it super simple to use for newcomers but long time vapers may feel this is perhaps a missed opportunity. The small led shows your basic level of charge:

On the base you’ll find a modern USB-C charge port along with some small vent holes for the battery. Charging isn’t particularly fast peaking at about 0.89 amps and taking around one hour and five minutes for a full charge. The power led pulses whilst it’s charging which can be quite mesmerizing if it’s in eyeshot, and once it goes a solid green, the charging drops right down to zero. The final recorded usable capacity was 698mAh which is a little below the quoted 800mAh but as this is such a low powered kit, it’s not really a concern and I’ve regularly been able to get a day and a half’s use from a single charge. 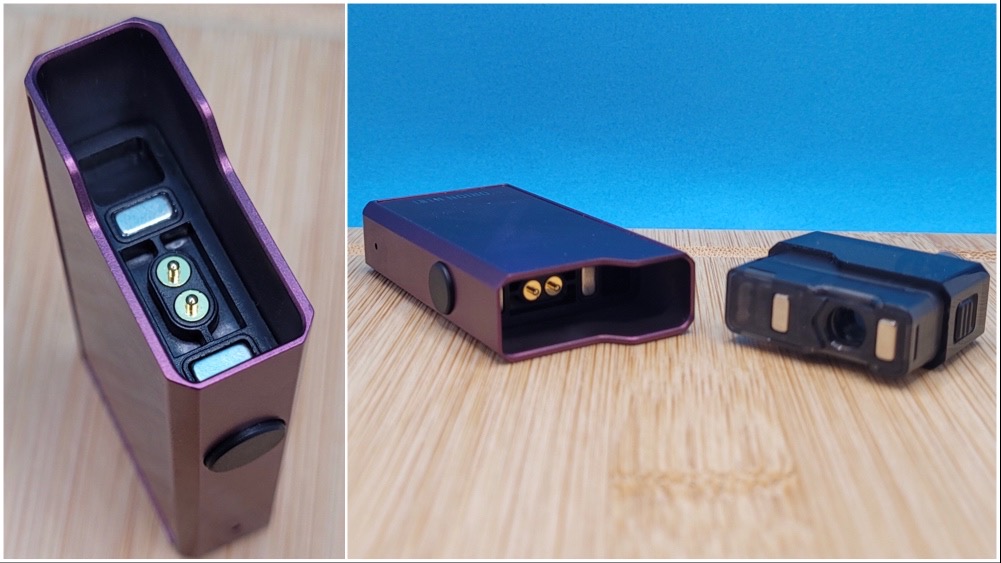 The pod sits in a recess on top and is held in place by two magnets, this clips into place with a satisfying thunk and you’re definitely in no danger of accidentally losing the pod. There are also two spring loaded contact pins here and the pod will only fit one way due to the sloped design at the top of the battery section. 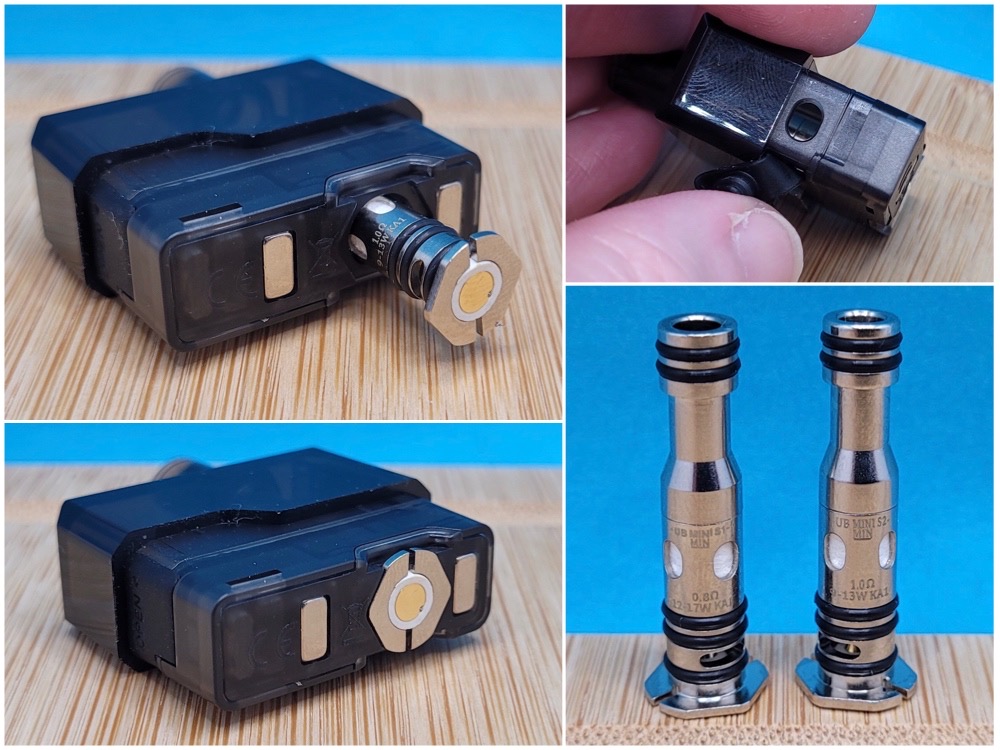 The pod and coils are a brand new design for the Orion Mini. There are two coils available, a 0.8ohm and a 1.0ohm, with a modern kanthal mesh setup, and these are pressed into the pod from the bottom. There’s a generously sized fill port on one side of the pod but the fill bung does feel a little flimsy and although it’s held up so far, I can see me having to order a replacement pod at some point down the line.

There is actually adjustable airflow built into the front of the pod, air comes in from this area and runs down a small chamber to finally reach the bottom of the coil. This is surprisingly effective and you can go all the way from an eye wateringly tight draw to a borderline restricted direct lung hit. Personally I’ve been running this about two thirds open for a loose mouth to lung draw, and both coils have performed well, but my choice here would actually be the 1.0ohm coil.

Despite the heavily tinted pod, it’s actually quite easy to see how much e-liquid you have available, but one downside of the design is that the coil is sat all the way over to one side of the pod and as I tend to habitually trigger fire things, this means that when the e-liquid level starts to drop, you can find the coil starts to dry out. I did in fact experience a couple of nasty dry hits before I figured this out and to be fair to Lost Vape, there’s actually a card in the box advising you to hold the Orion Mini the other way around to avoid this very situation!

The Lost Vape Orion Mini is a cracking little piece of kit and once I’d gotten used to thumb firing, it hasn’t skipped a beat. The 1.0ohm UB Mini coil lasted 10 days of fairly heavy use before it started to go off so coil life seems pretty decent as well and despite the relatively small battery capacity, I can easily get through the day on a single charge. If you’ve skipped over the Lost Vape Orion kits before, this may well be worth a look as it’s fairly inexpensive as well.

Many thanks to Healthcabin for sending the Lost Vape Orion Mini over for review.