Today for review we have the Innokin MVP Pod kit which was kindly supplied to me by Innokin themselves. Innokin are marketing this with their “Why Smoke” campaign, and if you live in London, you’ve potentially seen this plastered on your local bus. It’s a good campaign, and the more widespread the message to smokers to vape, the better.

Innokin have deliberately gone “Back to the Basics” with the MVP Pod and there’s not much to the device, but it still has a few tricks up its sleeve. I never really understood what the MVP part means though, my first thought was Mongoose Vs Penguin but then I realised it’s named after the hip-hop pioneer MVP who should be as well-known as Run DMC, NWA or RZA but he went MIA after being accused of crimes he didn’t commit so he met BA and worked as the little known 5th member of the A-Team so we have the MVP MTL pod kit. Is that all clear? 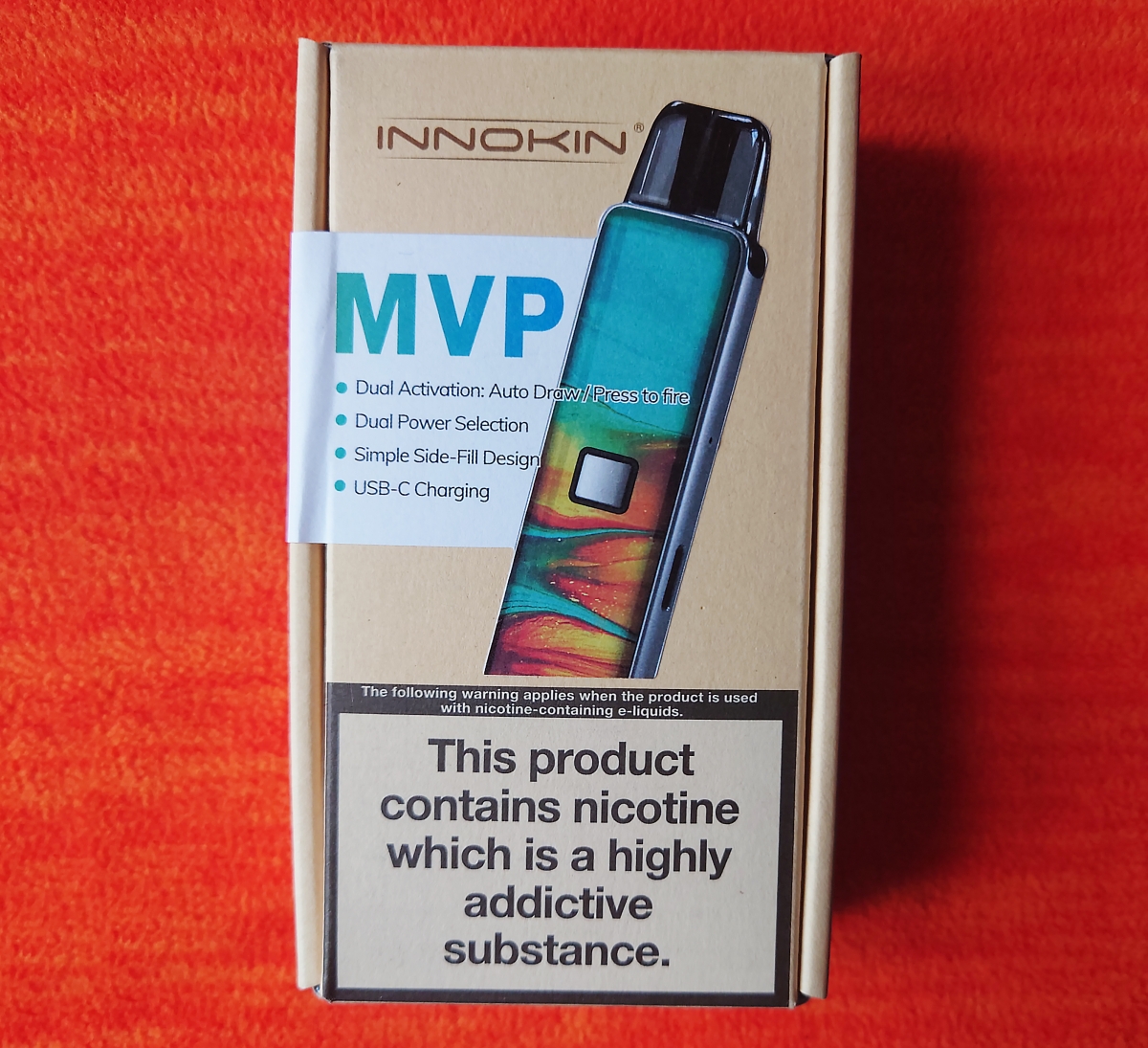 “I just consider myself on another plane from the mass populus, that’s all” - Murdock, The A-Team

Innokin continue their use of all cardboard and recyclable packing, and this is no exception, it’s well presented and simple with the device available as soon as you open the box, and everything else underneath. The total contents are:

The kit comes in six standard variants – stealth black, space grey, ocean waves, blue fade, pink fade and, the one I was sent, liquid amber. There are some special editions around as well, including one with the Union Flag on it. Check out Innokin’s social media and maybe you can win one. 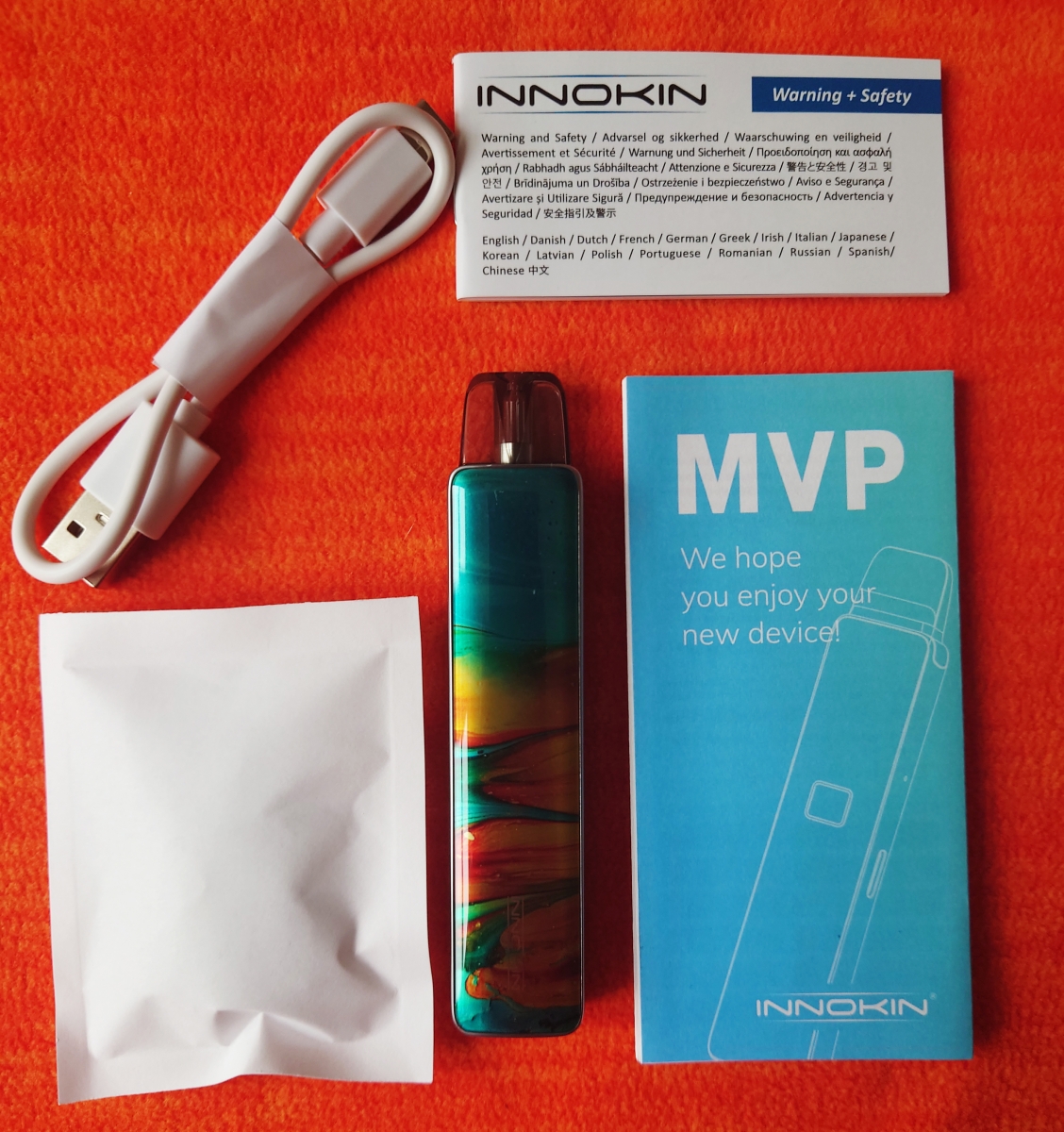 “I ain’t letting you put any of Murdock’s crazy juice in me, no way fool” - B.A, The A-Team

Due to it being back to basics, there’s not much in the way of specs really but the main ones are:

And that’s all you really need to know for now. Innokin use 0.65ohm MTL coils for the Sceptre to good effect, so let’s hope that continues here. The device itself is made of some sort of zinc alloy, and it means it always seems to feel cool in the hand which is like when you take your penguin for a walk and you have to hold their flipper because they get a little rambunctious at this time of year. It’s nice to hold, and the liquid amber one I was sent is an odd design but I like it, and if you like your devices a little more basic looking, then finding a variant you like won't be an issue. The fire button sits quite flush to the device but has a nice click when you press it, and it’s surrounded by an LED which gives indication of the wattage and the battery level. The pod sits in the top of the device and is held in place by strong magnets, but it comes out nice and easily and just clicks back into place, which is good as you’re going to be removing the pod quite a bit, but we’ll come to that later. 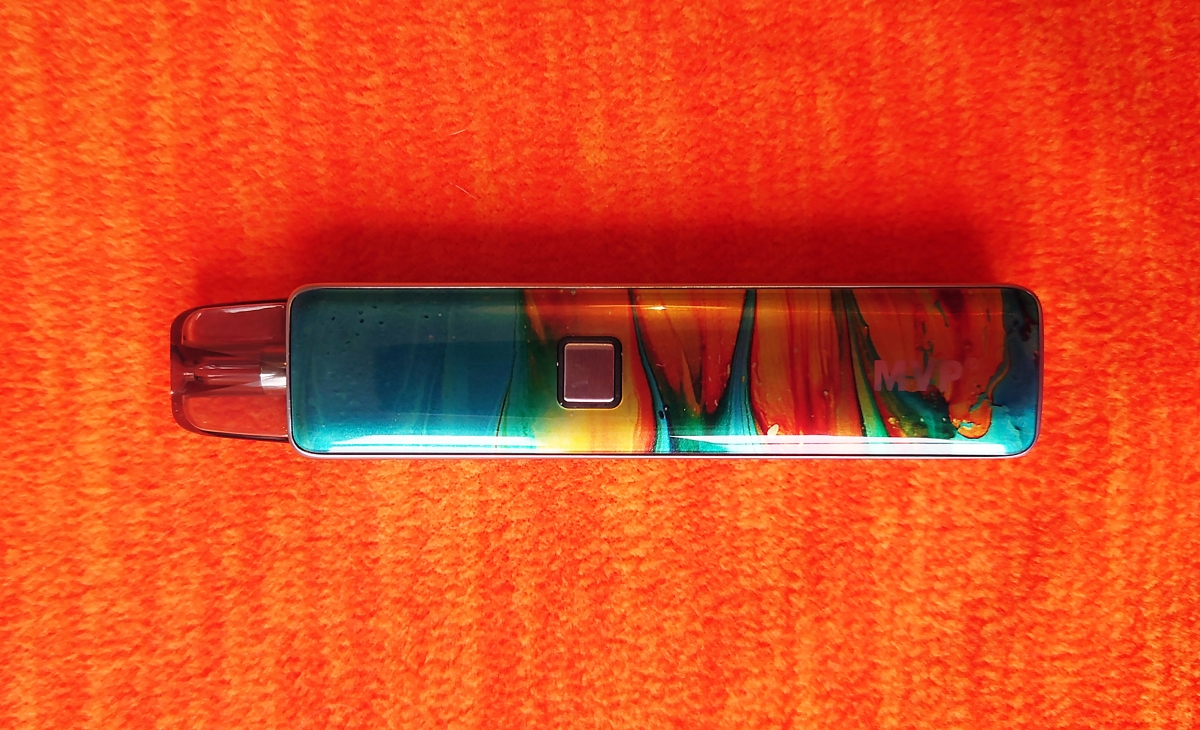 “All right, now who’s plan was this?” - Hannibal, The A-Team

This MVP Pod Kit is designed to be simple to use so there’s no airflow control at all. Everything is set by the device but there is some control over the wattage. As it’s Innokin, it’s three clicks of the fire button to turn the device on and three to turn it back off again, and if you press the button twice in quick succession it will adjust the wattage output. When the light turns green, the wattage is 11W, and when it turns red it’s 12.5W. When you charge the device, if the light is red then the power is below 90%, charge it will turn green when it’s above 90% and then when fully charge the light will go off. There’s no indication of battery charge level when in use though which feels like a missed opportunity. The device can be fired using the button or using the auto-draw, and I have to say the auto-draw works very well indeed and has always fired quickly and fully without any drop or stutter. 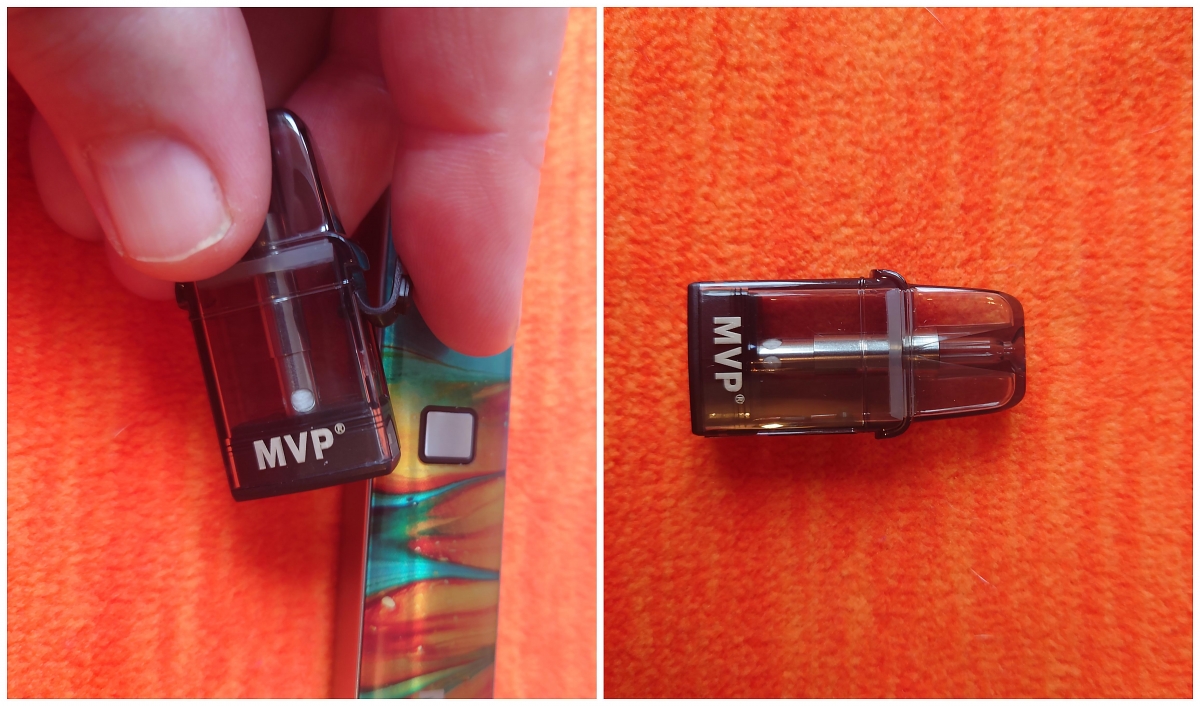 “Everybody knows the man’s a fool, he’s crazy, he sees people that ain’t there and he’s always talkin’ in circles” - B.A, The A-Team

The pod houses the 0.65ohm coil with two contacts on the bottom, and then the fill port at the side. It’s a typical duck billed style pod and has MVP etched on in quite large letters in case you were confused as to what you were using. The fill port bung is pretty sturdy and peels back to reveal the fill hole, which is fine for the standard 10ml bottles, but larger nozzles might struggle to fit. The bung fits back into place with a decent push, and at no point did it feel like it would snap or not fit back in correctly, so it feels nice and secure. The pod is slightly smoked, like a decent kipper, and with the TPD pods, there is a small rubber bung cutting off the top part of the pod. Now then, imagine you’re one of the few survivors of a robot uprising, they have taken over most of the world and you and your ragtag bunch of survivors have found refuge in an old 15th Century castle in the Welsh countryside surrounded by forest. It’s your watch tonight and you roam the castle walls on look-out duty, the responsibility of early warning of any impending attack rests with you and you feel the weight of this pressure on you, you're twitchy as any mistake could lead to the ultimate demise of humanity. You hear the sound of a snapping branch in the forest, you take a look, the hoot of an owl, you take another look, you’re on edge, another sound, you look, any sound and you’re on heightened alert. This is a bit what it feels like vaping this because of the way the pod is, it sits in the top of the device but when it does, you can’t see the liquid level at all. You have to keep removing the pod to check your liquid level, and as Innokin recommend making sure you leave the pod at least a third full, you find yourself checking this a lot. 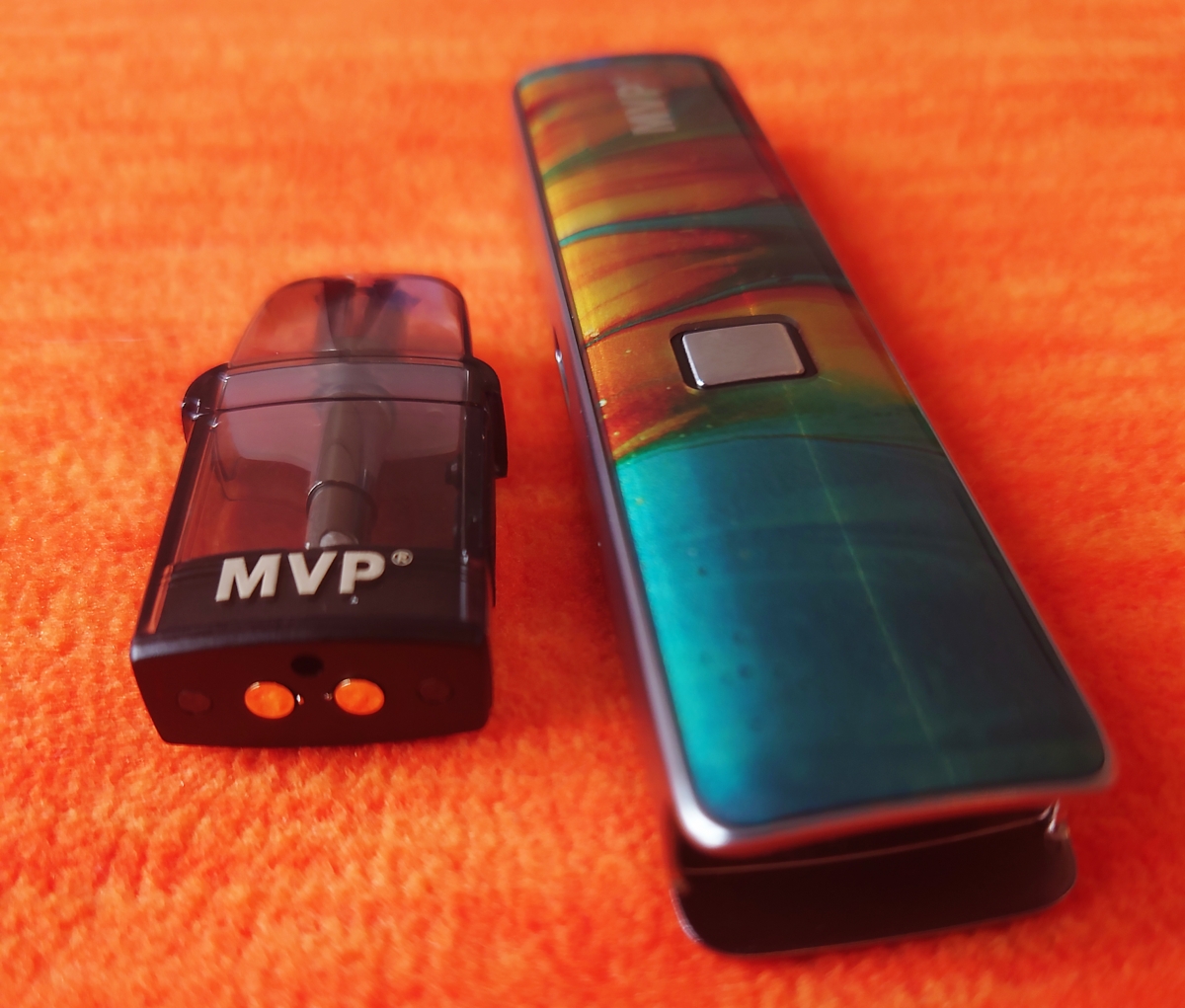 “Look to this day. For yesterday is but a dream and tomorrow is but a vision. But today well lived makes yesterday a dream of happiness and every tomorrow a vision of hope” - Face, The A-Team

Device all charged, pod filled and left to sit, off I went with my Crème De Tabac. I started with the device set to 11W and, well, it’s what I would call a medium MTL draw really and is a bit loose for my personal preference, but it’s a nice, smooth draw and would definitely suit someone looking to move from smoking to vaping. The flavour is decent enough at 11W, and there’s a decent throat hit, but I like my vape to have a bit more oomph to it, so I upped the wattage to the 12.5W setting. This is a definite difference between the two settings, it’s not massive but it’s noticeable, and for me the 12.5W provides the better vape, it’s slightly warmer, the flavour is more pronounced, and there’s more of a throat hit. I tried a different fruity liquid from El Diablo in the spare pod with much the same results. The flavour is good but not outstanding, but the draw is nice and provides a decent throat hit and a good overall vape experience. The battery wasn’t lasting me all day and charging took a touch under an hour, though you can vape whilst charging. There is a slight hum when you vape which you only really notice when it’s quiet and you are alone with your thoughts of an all penguin circus, but it is there, this may be the F0 tech from previous devices but it doesn’t mention this anywhere in the guide so who knows! 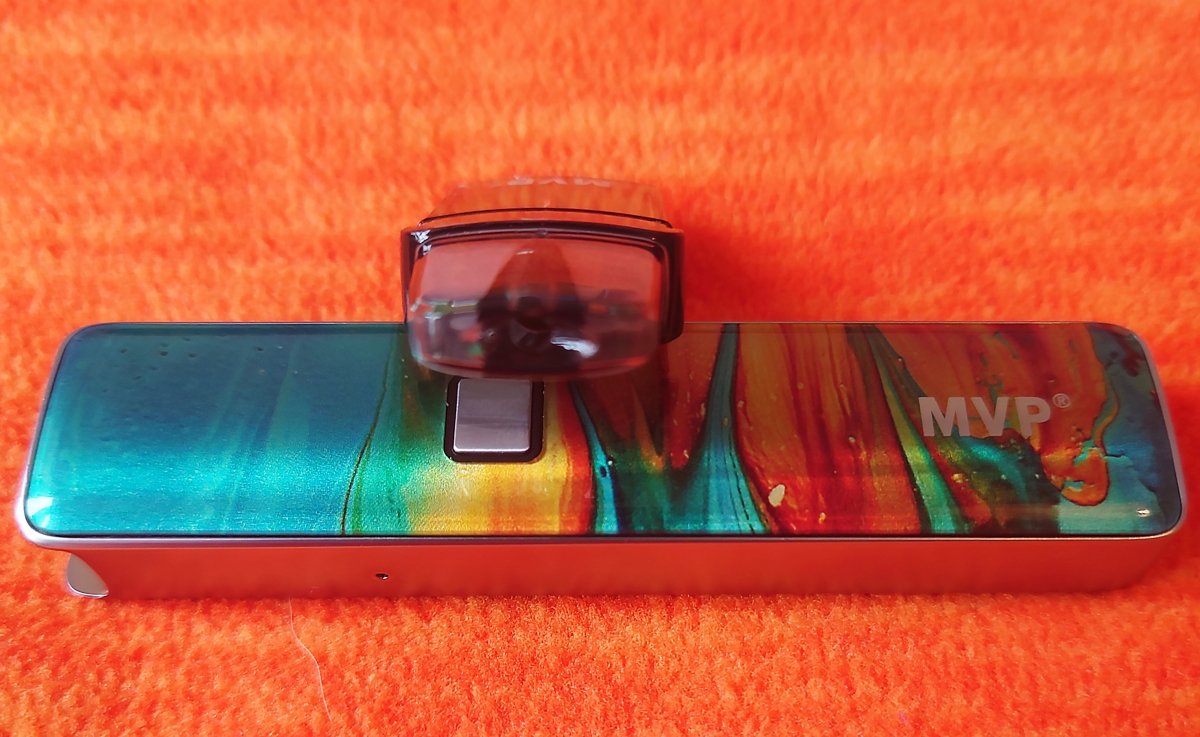 “He’s out there, I know…he’s out there, that devil of a whale I have chased for so long. The White whale, the living ghost with the harpoons of a hundred men in his back and yet he still swims on. How that ghost haunts my soul…my mind….” - Murdock, The A-Team

The Innokin MVP Pod kit is designed to be simple and back to basics, and that is exactly what it is so it’s fulfilling its brief and I’m sure Hannibal would love it as it seems like Innokin’s plan came together. It’s a good all-round device, the flavour is fine, the draw is decent, and it will suit new vapers. The ability to switch between two wattage settings is a good idea, and the build quality is superb.

That said, the lack of a battery level indicator seems like an oversight, and the fact that you have to remove the pod to see the liquid level at all isn’t a huge issue, but it does detract from the whole experience somewhat. 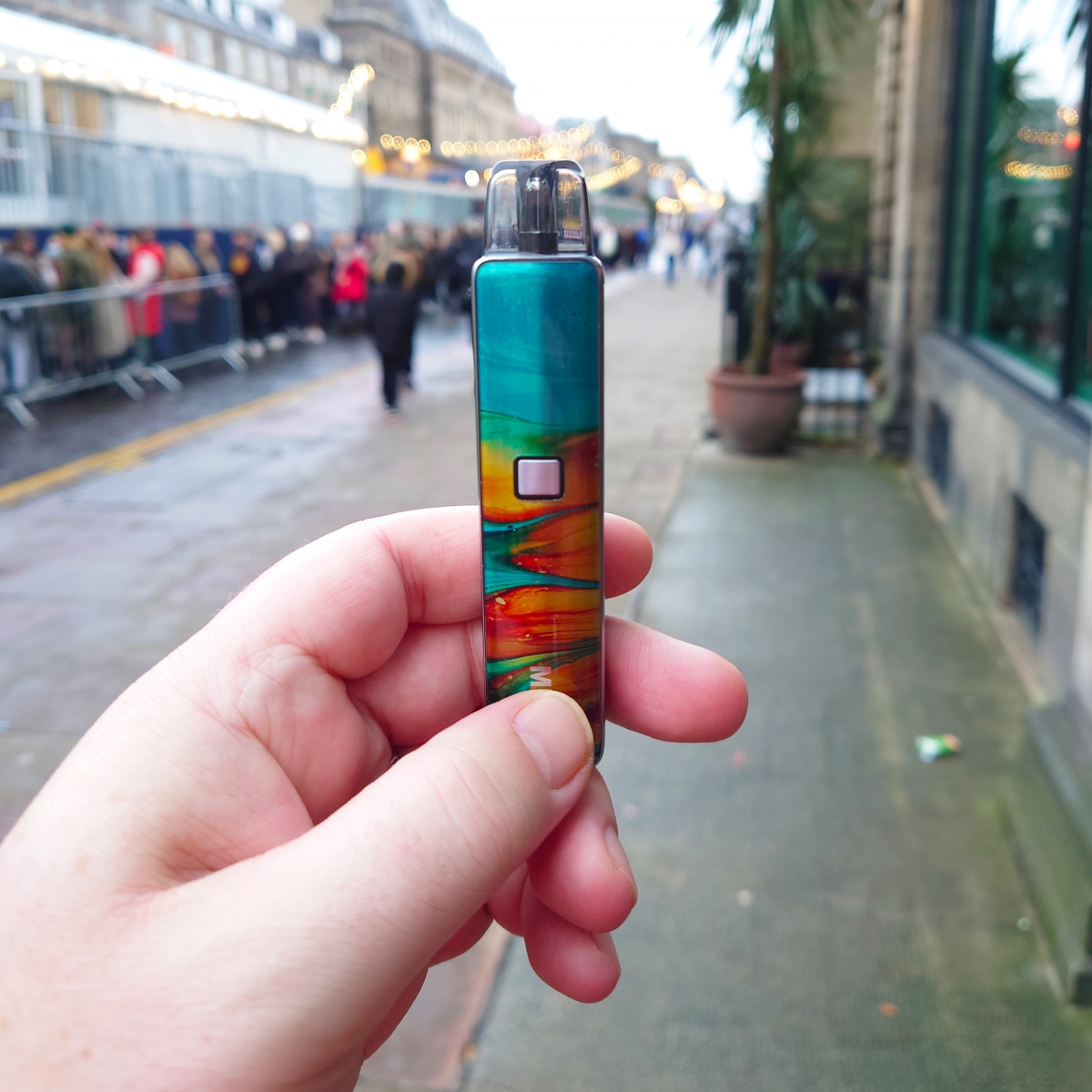