Today for review we have the Innokin Klypse MTL pod kit which was kindly sent to me by Innokin for the purpose of this review. Innokin have been around for a long time now and have produced some excellent devices over the years and I was hoping this one would follow this trend. I’m not sure where they got the name Klypse though, but does that really matter if the vape is good? Not to me, so let’s see if this one continues the Innokin success trend…. 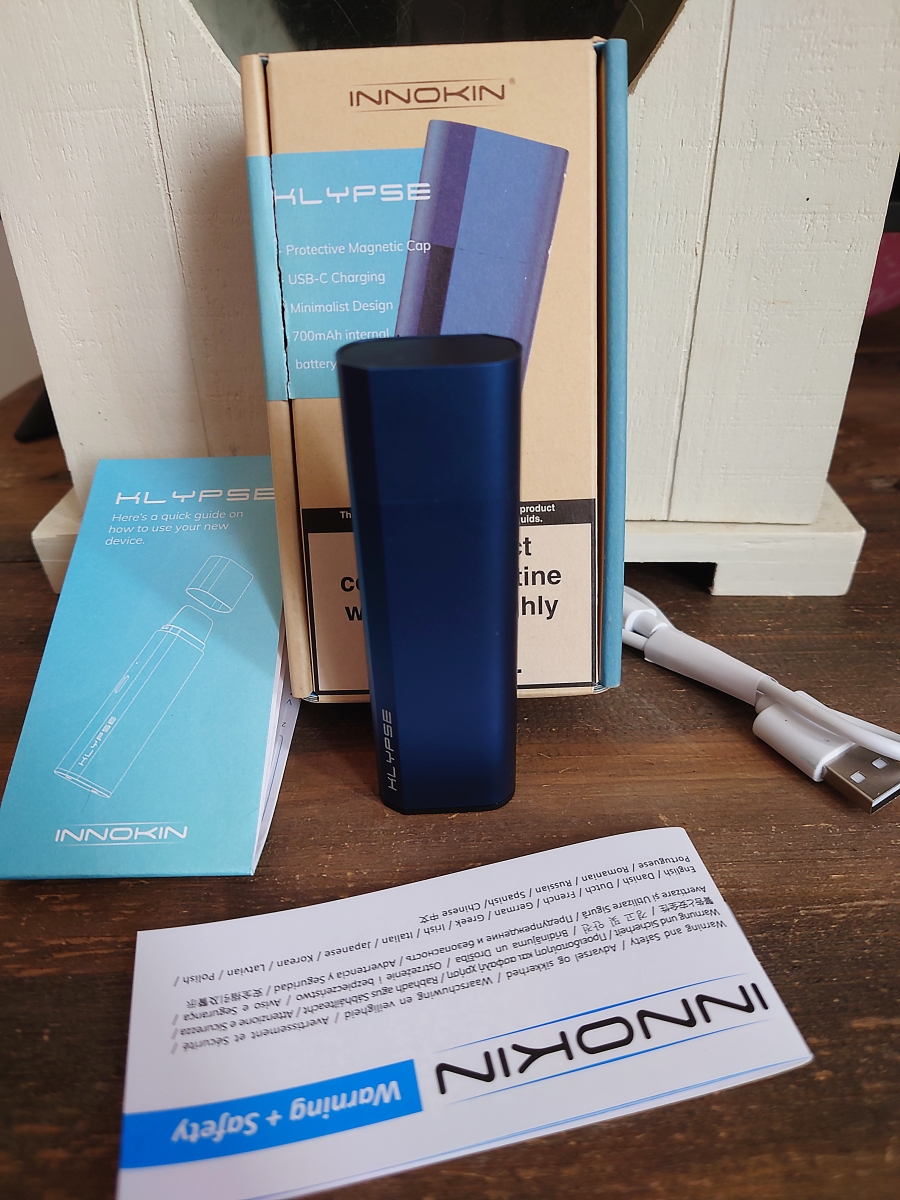 I tend to like the packaging that Innokin use and this is no exception, just pull the tabs out and flip open the box. The packaging is all recyclable which is fantastic, and they don’t include anything you don’t need. Open the box and there’s the device in front of you, all ready to be filled and off you go. In the box is the device with a pre-fitted pod, a type-C charging cable, a quick start guide, and a warranty card. I do wish they had included a second pod though as if there’s an issue with the one pod, or you make a mistake and burn the pod out, then you don’t have a back up and are stuck until you can buy a new pod. The pod itself looks sleek and futuristic and for some reason it makes me think I could tie some fishing wire around it and use it as a prop for my low budget sci-fi thriller about pod people (see what I did there), but for now it reminds me of a spaceship from Red Dwarf even though it’s not red, but let’s go with that theme for now and see what happens.

“How come you need more memory? Over the years you’ve had more RAM than a field of sheep!” – Cat, Red Dwarf

The device is aimed as new vapers and the simplicity will be great for beginners. There’s no airflow adjuster, no wattage adjustment, and no buttons, it’s just fill and vape. The first thing you’ll notice is the cap which covers the pod itself, you simply pop this off to reveal the pod and then, because it’s magnetic, you can just stick the lid on the bottom of the device and the magnets will hold it in place. It’s a good idea to ensure that no pocket lint gets into the mouthpiece and to be honest, it’s quite difficult not to fidget with it somewhat. Just be careful not to lose the top cap though as I can see myself doing that, it won’t stop the device from working but I do like that I can stick the top on and then just stick this in my pocket. 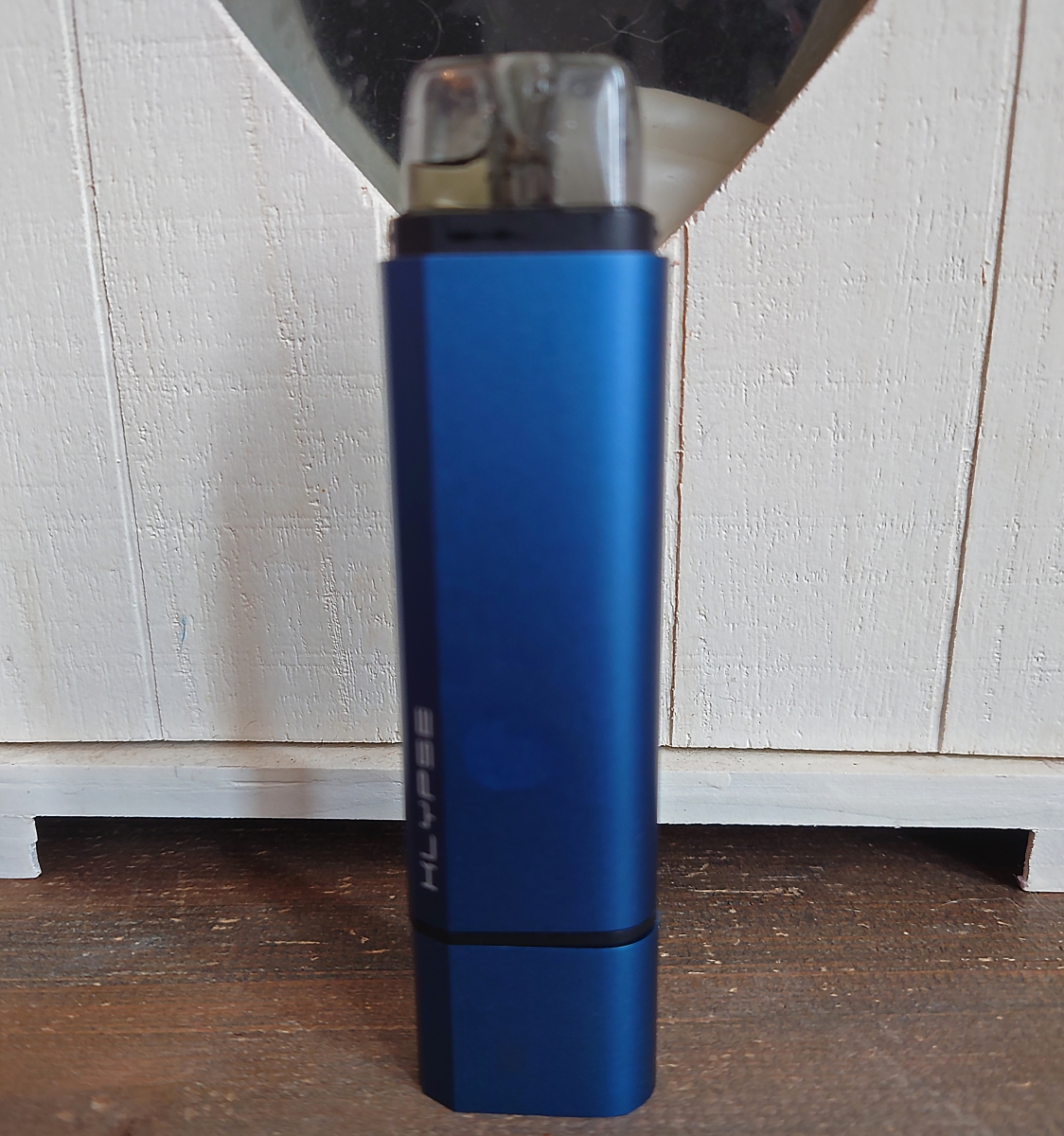 “Smoke me a kipper, I’ll be back for breakfast” – Ace Rimmer, Red Dwarf

The device is nice and light as it’s made from an aluminium alloy, and there’s minimal branding with a stripe and “Innokin” on one side and “Klypse” on the other. Overall I really like the styling of this device, it’s simple yet sleek and looks good with the added bonus that you can stick the top cap on and no one will know what it is. The device is a compact size at 94mm x 29mm x 15.2mm, and houses a 700mAh battery. It comes in six colours – Blush, Scarlet, Mint, Charcoal, Graphite and, the one I was sent, Indigo, except it’s not indigo, it’s blue. I think Innokin need to stop taking rainbow advice from Bungle and maybe speak to George or Jeffrey instead. Charging is done at 1A, and from flat to full takes just under an hour, but you can vape while it charges.

There’s only one light on the side which is incorporated into the black styling strip, and it will light up when you vape or flash when you remove or replace the pod. It will also flash ten times when your battery is at less than 10% which is great, but there’s no way to tell how much charge your battery has until it’s too late. I wish they had done something more to indicate battery life as I found myself charging it before I went anywhere to make sure I had enough charge to last me. The battery wasn’t quite lasting me all day, but I vape quite a lot and to be fair, it lasted longer than I anticipated. 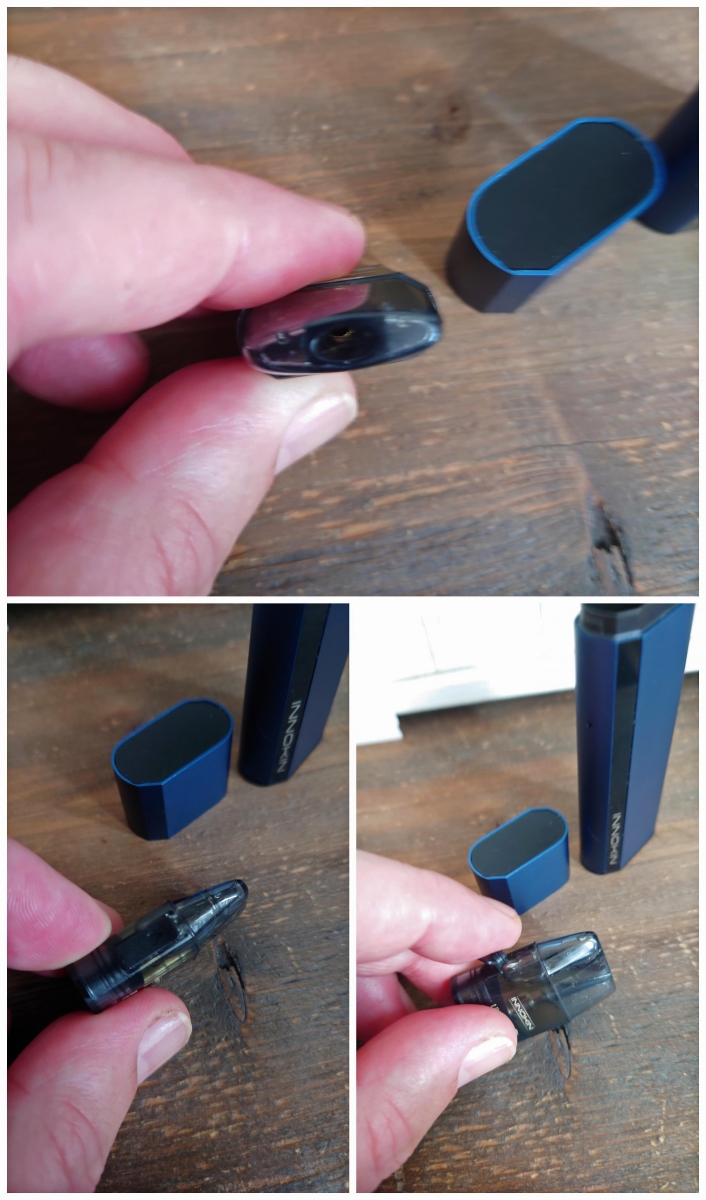 “Because the King of the Potato People won’t let me” – Rimmer, Red Dwarf

The pods hold 2ml of e-liquid and are slightly tinted plastic but I’ve never had an issue seeing my liquid level even when in sub-optimal lighting. The coils are made of Kanthal and are 0.8ohm with the device firing at a set output of 16W. To fill, there’s the usual pod rubber bung which is on the side which you peel back to reveal the fill port. The port will take all but the largest bottle nozzles and filling hasn’t really caused any issues for me at all. The pods have a little “Min” line on them which especially for a new user, is great as it means that you shouldn’t ever run too low on liquid and burn the coil out. However, the “Min” line is hidden by the device itself, when you put the pod into the device you can’t see it so when your liquid level goes below what you can see, you have to keep removing the pod to see how much liquid is left. If they had made it so that the pod sat in the device to the Min level then that would have made it easier and in my opinion made it much better. The pod does sit in the device nicely and the magnets which hold it there are strong enough to make sure that it’s not going to come out by accident, I did a flick test and it stayed in there. The mouthpiece on the pod is nice and comfortable and it feels good to vape. 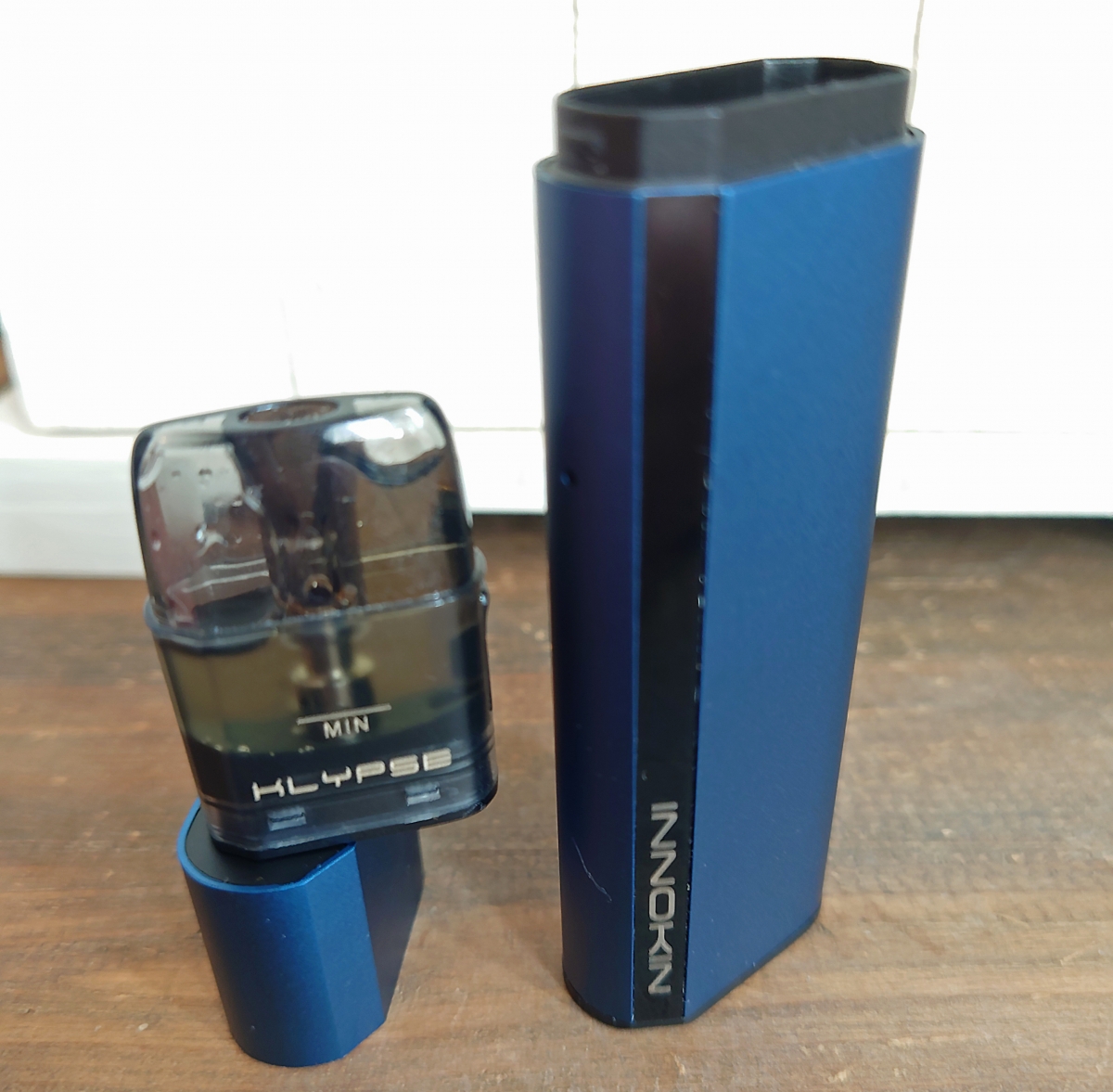 “And the moral of the story; appreciate what you’ve got, because basically, I’m fantastic” – Holly, Red Dwarf

I loaded the pod up with some Okay Orange Cherry Liquorice, let it sit for 10 minutes and gave this a whirl. Now, does anyone remember the 80's TV show Knightmare? It was basically where kids played a weird green screen video game, there were one’s who could see everything that was going on and one who had to put on a helmet so they couldn’t see anything whilst the others barked orders at them. Left a bit, jump, forwards, that kind of thing. The one with the helmet on just had to do their best to follow the orders and see if they could evade monsters or traps and the like. It was always dragons though, why not be more inventive with the monsters and have maybe a vengeful penguin with a club, an exploding vase or a troublesome raccoon that disarms you with a joke before burning you with a flamethrower. I always thought it was preparing kids for what it would be like to be kidnapped and imagined just how they felt that during their big TV moment their face was basically covered and they were in the dark being shouted at. What’s this got to do with how this vapes? Well, for starters I was in the dark about what this would be like and, like the contestants, I couldn’t adjust anything at all I just had to close my eyes and do the one thing I was there for, vape.

I took a draw and wow, it’s smooth. It’s a bit looser than I would normally like but the flavour more than made up for it. The flavour is superb indeed, a nice warm vape that floods the mouth, and the flavour hits you in a lovely wave that stays in the mouth even after you exhale. The auto-draw has worked every time with no issues at all and did I mention the flavour? It really is excellent. The output of the vape drops a bit as the device loses it’s charge, but it remains satisfying and full of flavour. It’s a really nice vape indeed.

“I’m so gorgeous, there’s a six month waiting list for birds to suddenly appear, every time I am near” – Cat, Red Dwarf

Overall I really like the Innokin Klypse. The vape quality is outstanding, the flavour is top notch, and I like the styling. It charges quickly enough, the pods are easy to fill, and I think the little touches like the top cap and the Min level on the pod all add to a cracking little device. I’ve been vaping this solidly for a week and the pod is still producing that great flavour.

There are some niggles I have with this though, the lack of airflow adjustment considering that it’s quite loose is a bit of a miss for me, as if I could just tailor it a little, it would have improved the experience a bit. I’d like to see all devices have removable coils and the Min level sitting where you can’t see it feels like an odd design choice to me.

The Innokin Klypse is a simple device aimed at beginners and for that, it’s a success for sure. It’s simple to fill, simple to use, and produces flavour that is up there with the best from the pods I’ve tried. Would I recommend this to a beginner? Absolutely I would, and I’ll be continuing to use this device myself. 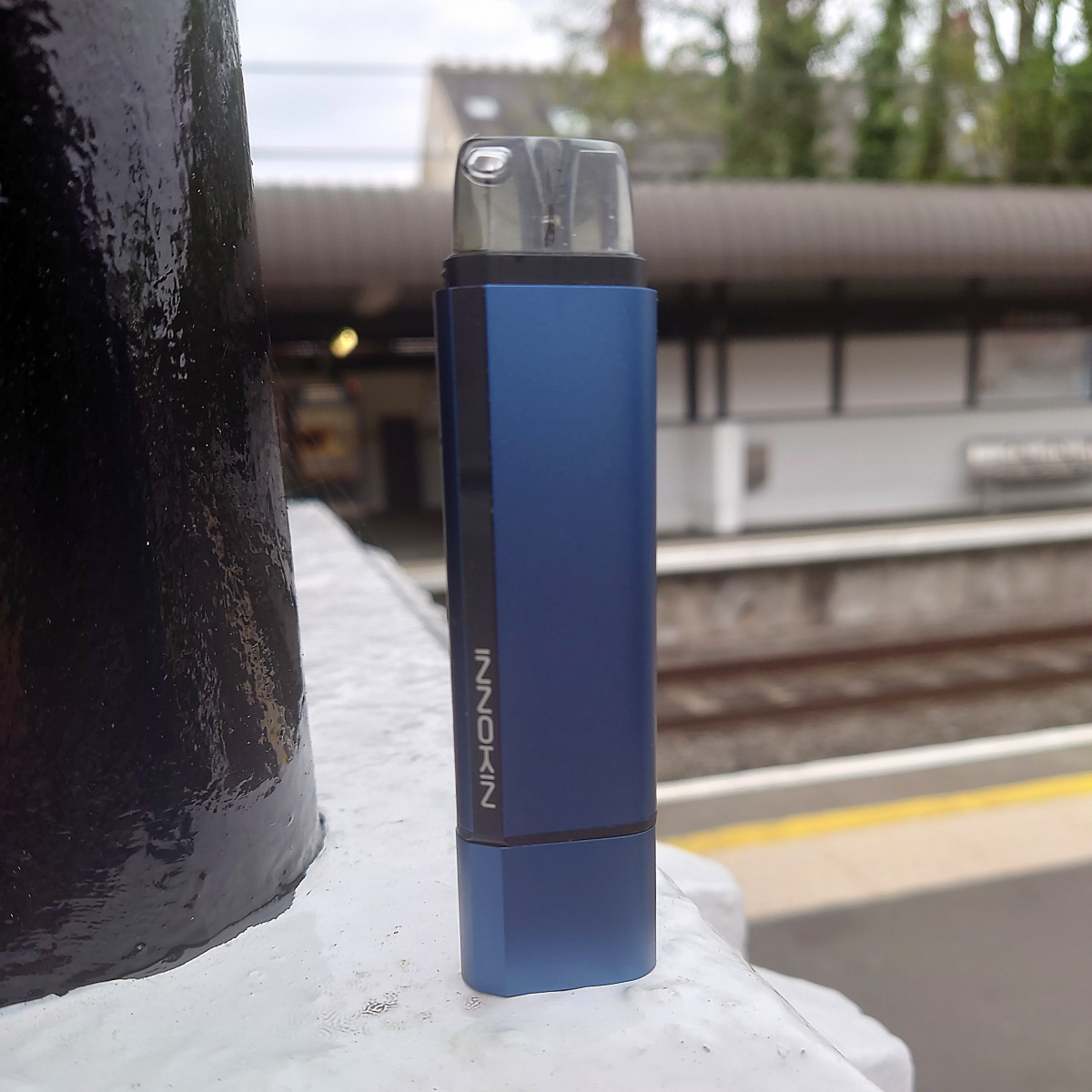