Today for review we have the Eleaf iStick Power 2 kit which was kindly provided to me by TECC.

The kit consists of the iStick Power 2 mod and the GTL Pod Tank which we’ve seen before on some other Eleaf devices. The original iStick Power has been around for a number of years and is considered a good solid workhorse of a mod with long battery life, particularly by MTL vapers. When I say iStick Power, all I can think of is pretending to be He-Man saying “I have the power”, so will this have the power of Greyskull or will it make me cringe(r)? 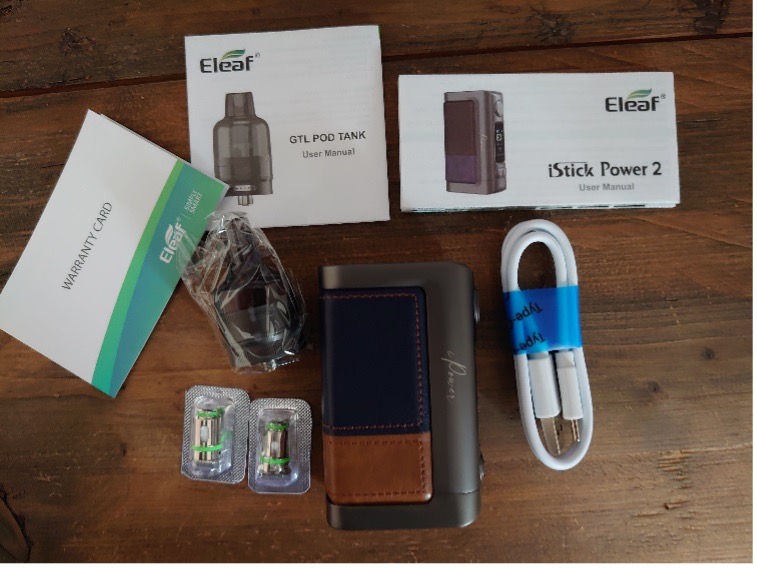 Unremarkable but solid packaging reveals the mod and the tank with everything else stored underneath. There’s no coil preinstalled but in the box you’ll get the mod and tank, a 1.2ohm GTL coil, a 0.8ohm GTL coil, a USB-C charging cable, warranty card, GTL pod tank manual and iStick Power 2 manual. This is the TPD version but the standard version comes with a larger pod tank and the 0.4ohm coil instead of the 1.2ohm coil.

The mod comes in black, blue, red, dark brown and, the one I was sent, light brown. 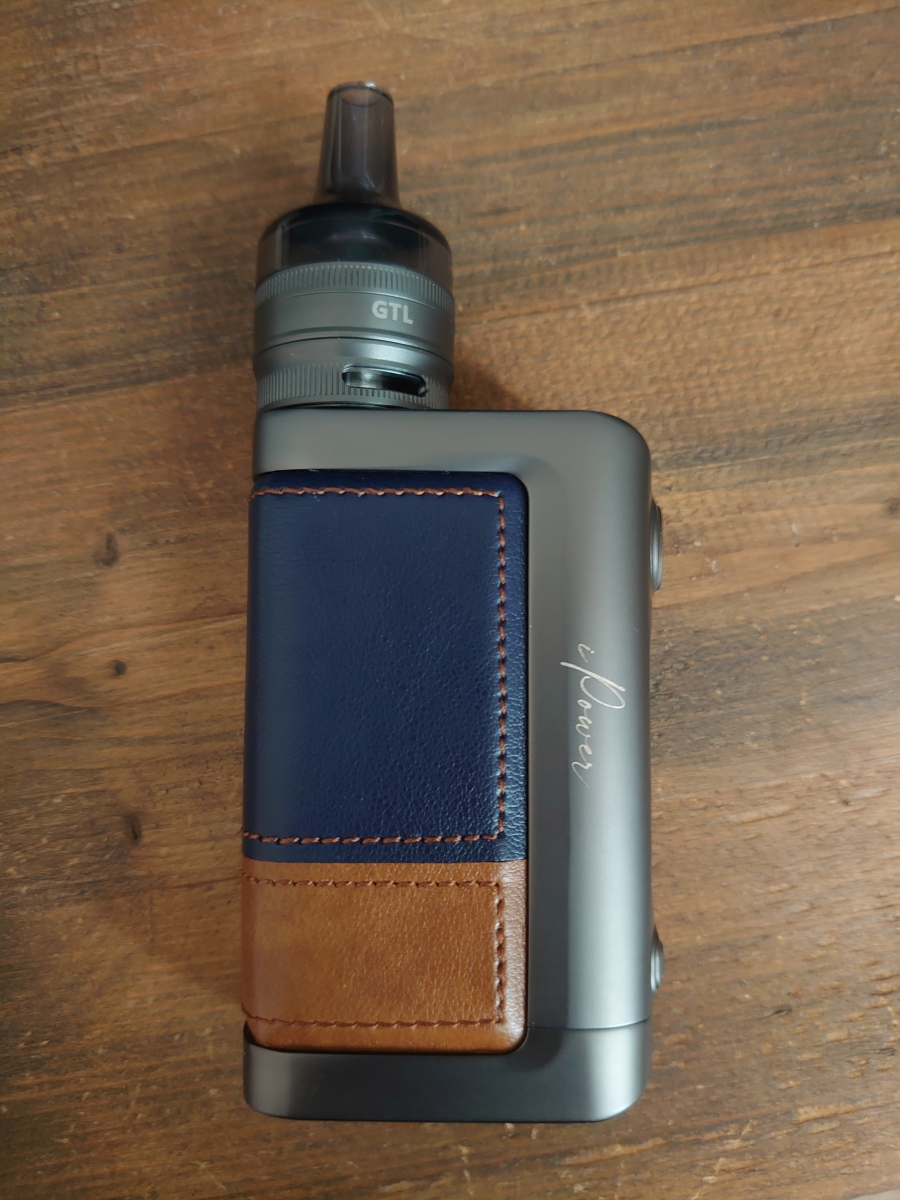 We’re gonna have a quick specs intermission then back to the good stuff, for a full list of specs and protections please click here. 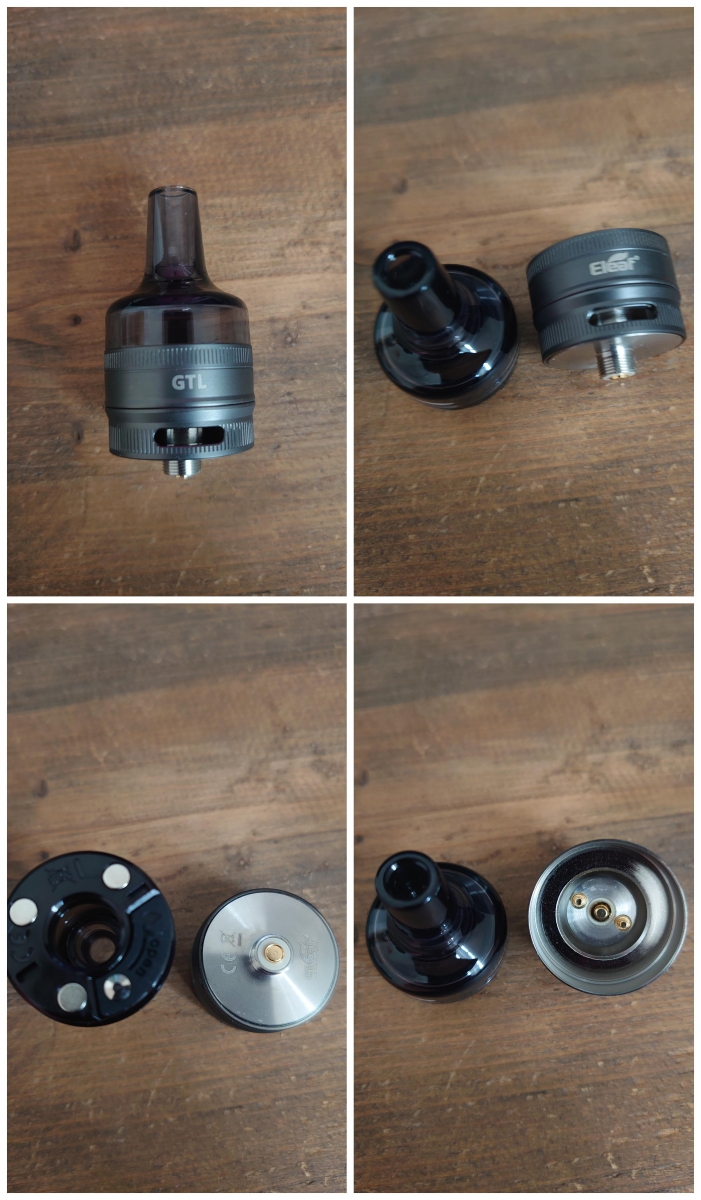 In a step away from devices where the pod just sits on top and companies maybe then later produce a 510 adapter, this is an actual pod tank with a base that has a 510 connection. The pod itself is a simple plastic tank with a capacity of 2ml and is slightly smoked, which means that your liquid level is visible in most lights. The coils are easy to fit as they are simply push and pull. It has a simple rubber bung on the bottom to refill and it’s a decent sized fill port. It’s held in place by strong magnets which pass the flick test and it clicks nicely into the base. The base is metal and has a nice airflow system with five small holes and a large cyclops opening so you can tailor the airflow to exactly your preference. The airflow ring has a good resistance to it but at the same time a smooth glide as well, and because of the 510 connection, you can put this on any mod with a 510. In the looks department, the whole pod tank itself isn’t the best looking item in the world, it’s erm functional is the best way of describing it. A big plus for this however is the fact that the Voopoo PNP and TPP pods as well as the Innokin Sensis pods will all fit this base so if you are a fan of those particular pods, you can use the base as an adapter to enable you to use those pods on any mod with a 510 connection.

I’ve reviewed the coils and pod before but I gave them another shot and the results were pretty much as I expected. The 1.2ohm coil gives really good flavour and a lovely smooth draw but for me it’s too loose for MTL and this isn’t helped by the mouthpiece which isn’t particularly comfortable and is just too wide for a good MTL draw. With the airflow, you can get a nice wide open MTL draw, but even when fully closed off, it’s a medium MTL draw really and when you close the airflow off you lose some of the flavour.

The 0.8ohm coil is very similar, it’s too loose for MTL again but you can get a half decent RDL draw from it, it’s quite tight but it’s a nice experience as the airflow is again lovely and smooth though it is quite cool as the coil is only rated up to 18W. 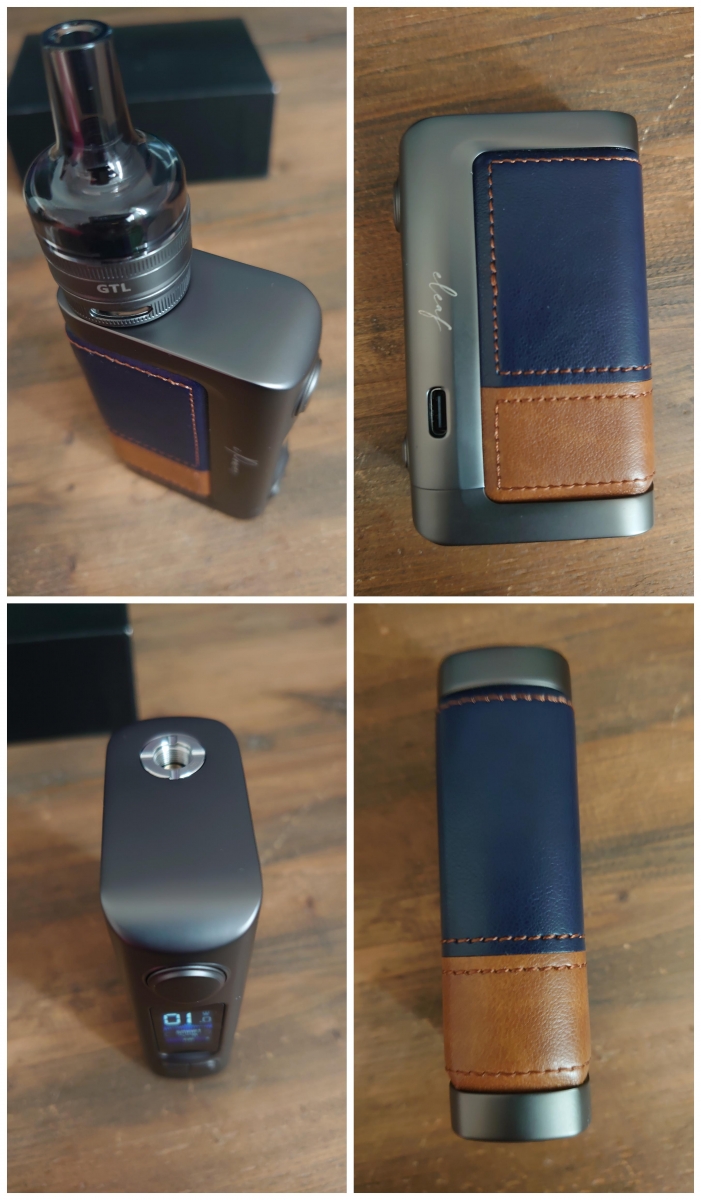 Let’s face it, the pod tank is a pod tank and you’re really here to hear about the mod. Let’s get this out the way, in my opinion this is one sexy beast of a mod. It’s the She-Ra of mods. The leather grip is a delight to hold as it’s lovely and soft, the alloy construction is solid and nicely rounded, the buttons are responsive and clicky, the subtle yet classy calligraphy branding all make this an absolute belter in the looks and comfort of use department. This is a solid and well-built mod, it’s sturdier than Ram-Man and it’s a decent weight and certainly not as heavy as I thought it might be for such a large battery.

To operate there’s the standard five clicks on and off, and three clicks will lock the wattage up and down buttons. Pressing Fire and Down activates “Stealth” which means that when you fire the device the screen stays off which is a nice battery saving idea, but with a battery this big it’s not really necessary. Pressing the up and down buttons together opens the menu with the following options:

There’s not much to the features really but it’s straighforward and clear to use. There’s no temp control or bells and whistles but for most vapers the option of variable voltage and variable wattage will be enough. The SMART mode detects the ohm of the coil and restricts the maximum wattage that you will be able to set for it. For a SMART mode, it’s not actually that clever really as even with the supplied 1.2ohm coil (7W-13W) it allowed me to set the wattage at 20W which would burn it out straight away. 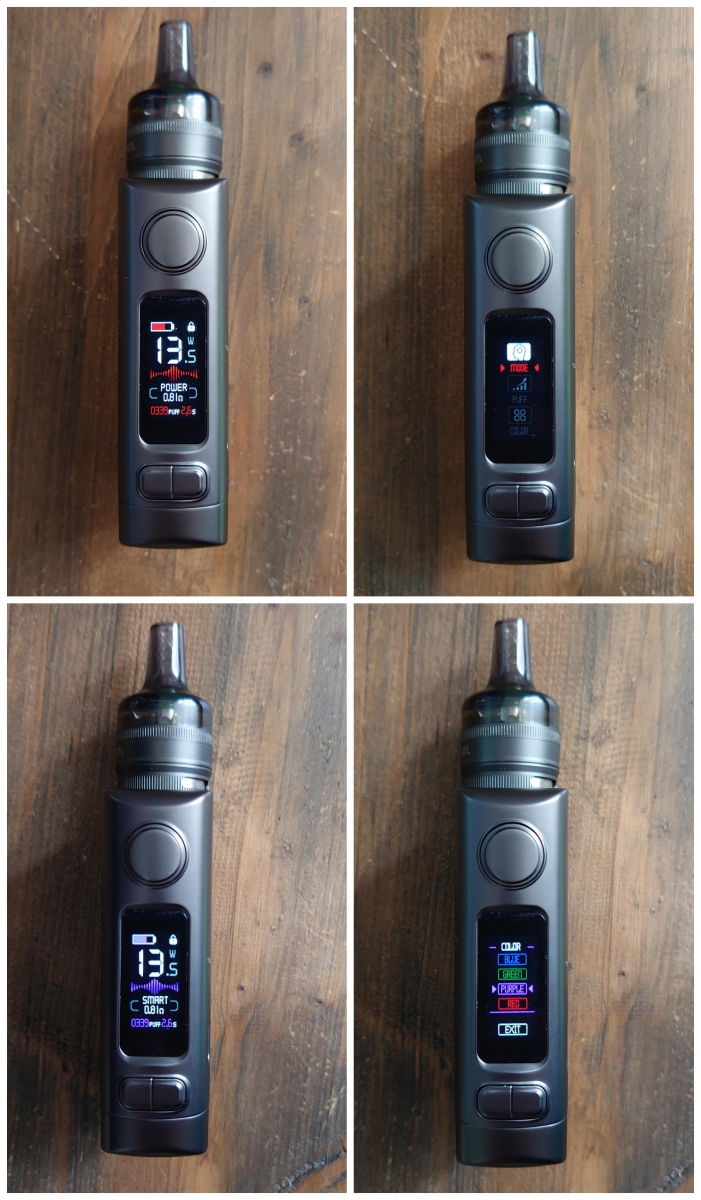 The screen itself is bright and vibrant and shows all the information you need – the mode, battery level, padlock to show if it’s locked or not, wattage/voltage, coil ohm, puff counter, puff length and a nice wavy graphic when you press the fire button. I like that the puff length stays on the screen until the next draw as too many mods show it for a fraction of a second before it disappears, but the battery level is just the bar where I’d personally prefer a percentage. Oddly, it shows the percentage when you charge the mod but not during operation. The battery itself, being 5000mAh, will really last, at 13.5W I was getting three days out of it before needing to charge which is superb, and charging from 15% to full took less than 90 minutes. The reason I charged from 15% was that below that you’ll notice a drop off in power, when I had it set at 53W then below 15% it dropped the power to 45W when firing. 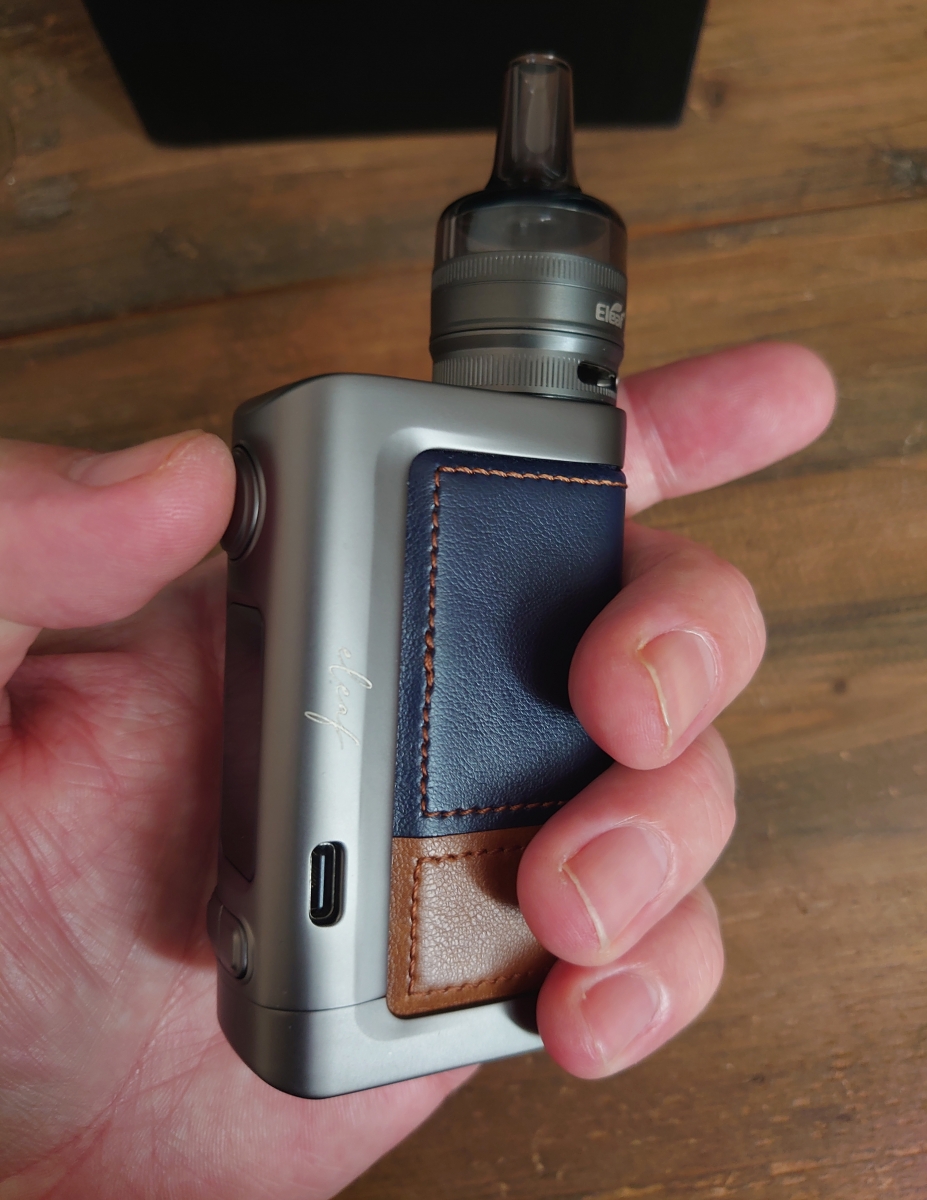 Like the ongoing battle for Eternia, this kit really has two parts to it which oppose each other in terms of quality. The pod mod has potential as the flavour from the coils is really rather good, but they are too loose for MTL. The airflow itself is nice and smooth, and the pod base has the 510 connection and can take the Voopoo pods as well as the Sensis pods which are all redeeming features but the mouthpiece on the pod isn’t good and it’s pretty ugly. Overall the pod just doesn’t do it for me and it’s not something I could recommend you buy. If you like loose MTL it might suit you, but for me it just doesn’t add up, like how no one realised that Prince Adam was He-Man, his clothes just literally fell off, how did no one spot that? In terms of a disguise it’s so poor it makes the Clark Kent/Superman ruse seem like a work of genius camouflage.

The mod is a different story entirely, its build quality is superb, the leather looks great and feels delightful, the subtle branding, the curves, it fires quickly and it lasts (for MTL) literally for days on end. It really is a comfortable and beautiful mod and although there’s not much in the way of features, it just works and does it superbly. I have a few niggles with the mod but they are purely personal preferences, I’d like the battery percentage on the screen rather than the bar, I’d like the 510 centred and I do wish they’d used the fire button from the iSolo R/iStick S80. That’s not to say the button is bad, it’s very good, but I just prefer the other button.

If you want a no nonsense mod for wattage or voltage which looks great and performs each and every time, then I cannot recommend the Eleaf iStick Power 2 Kit highly enough. It’s become one of my favourite mods and will be in use for a long, long time. It’s a superb solid workhorse of a mod just like it’s predecessor. It’s so good Skeletor will be jealous and want to get his evil hands on one right away though I’m not sure why, I never worked out why he was so grumpy. Did someone steal his last bit of peanut butter? Did someone tell him penguins don’t exist in Eternia? I guess we’ll never know but what I do know is ditch the pod, buy the mod. 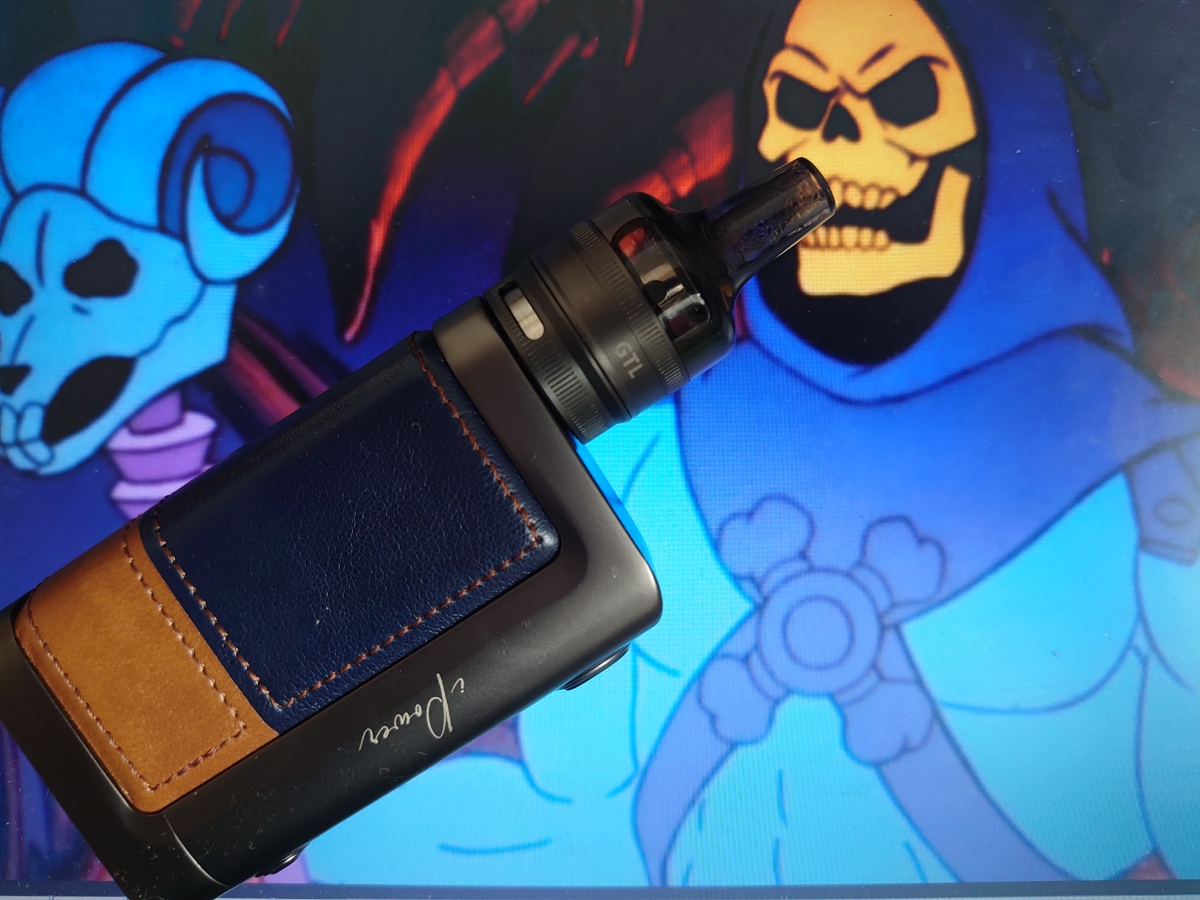