Having previously reviewed the Artery Cold Steel AIO Pod/Mod:
https://www.planetofthevapes.co.uk/reviews/pod-systems/artery-cold-steel-aio-pod-mod-kit.html
That was a great kit for DL and RDL, but the AK47 looked more suitable for MTL so I ‘bit the bullet’ and agreed to review it. Perhaps I’m ‘jumping the gun’ here but it’s rather good! 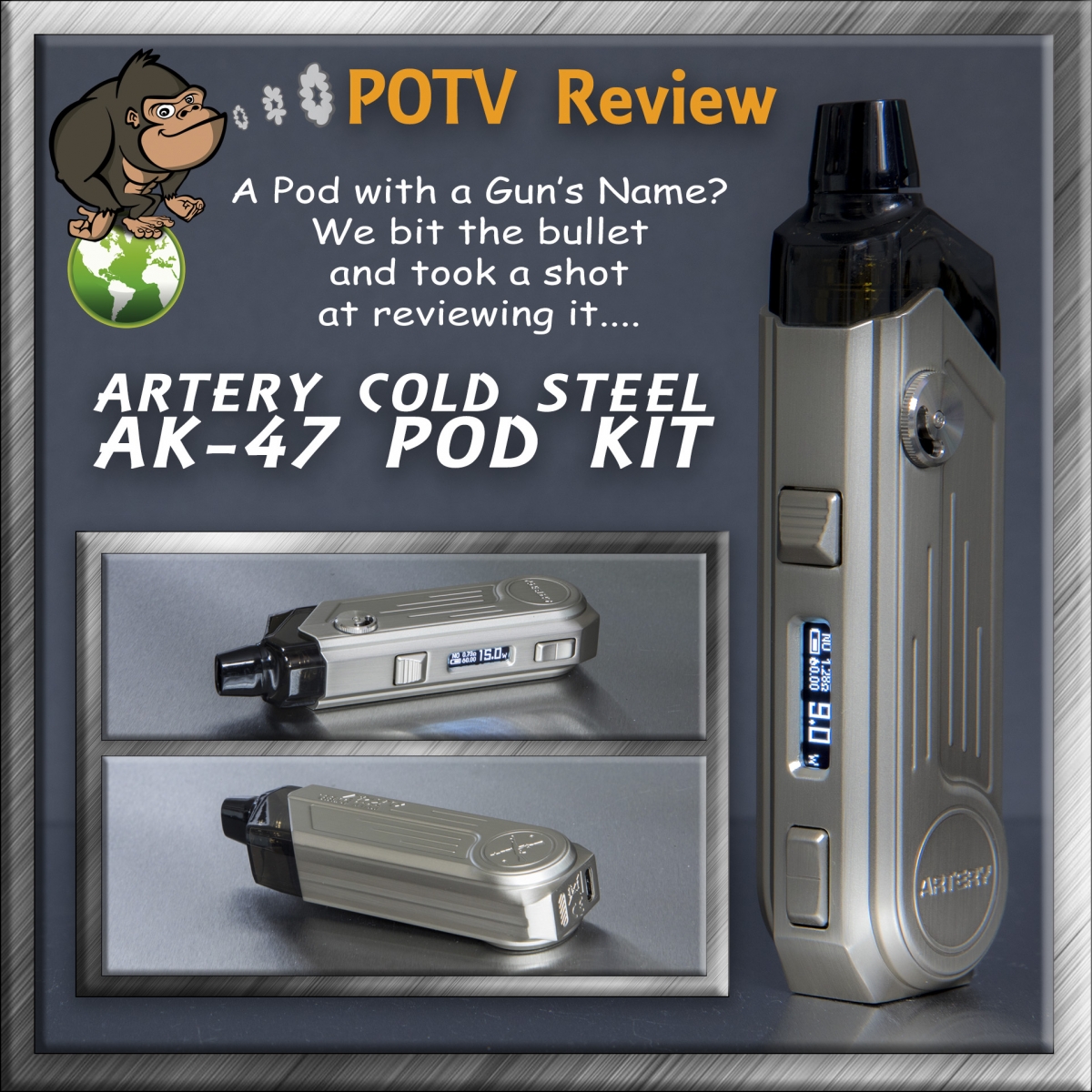 Before I crack on, let’s address the elephant in the room: Guns! The AK47 is clearly styled around the worlds most manufactured assault rifle. Now I know this will offend or possibly outrage some folks, but not me, I honestly don’t care what they call it. They could call it ‘Monkey Spunk’ for all I care, the important thing for me is the looks and performance, so I am not going to let the gun theme affect my review, though I doubt I can resist gun puns along the way.

These details mostly tick all the boxes for me, but when is ‘bottom filling’ ever easy? But there’s a few things that do stand out for me. The ‘E-juice detectable technology’ worked well enough on the AIO but I think it will be more effective on this kit due to the pods shape. The ‘Changeable 510 drip tip: MTL or DTL’, nice one, this came in handy later on. The 1500mAh battery is also very welcome for the size, and finally a decent charging current, USB-C at 1.5 Amps.

The box is nothing special but is a of a good quality construction and everything is nicely packaged, though I am glad they didn’t plaster guns and bullets in the artwork (or indeed ‘Built For Killing’ on the white box). 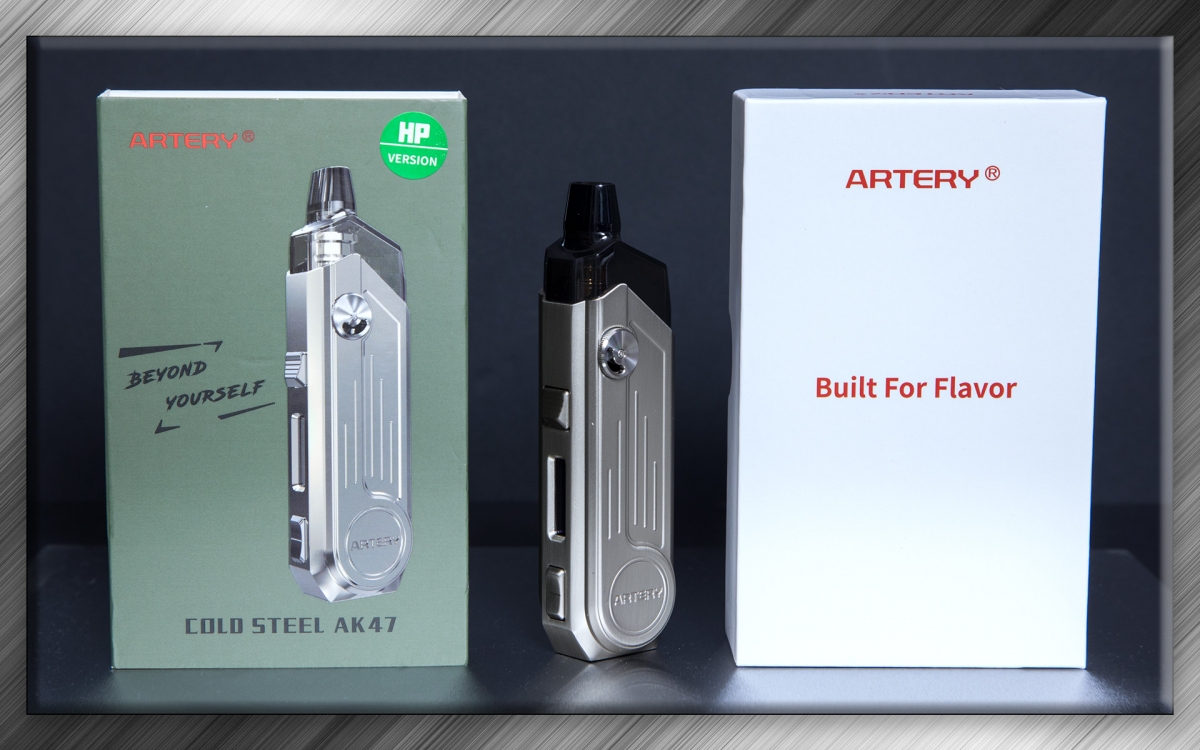 Opening up the inner box reveals the AK47 itself and a box of extras, I have to admit seeing the kit in real life brought a smile to my face. Forget the whole gun thing, it looks very art deco to me and I really liked the look of it. 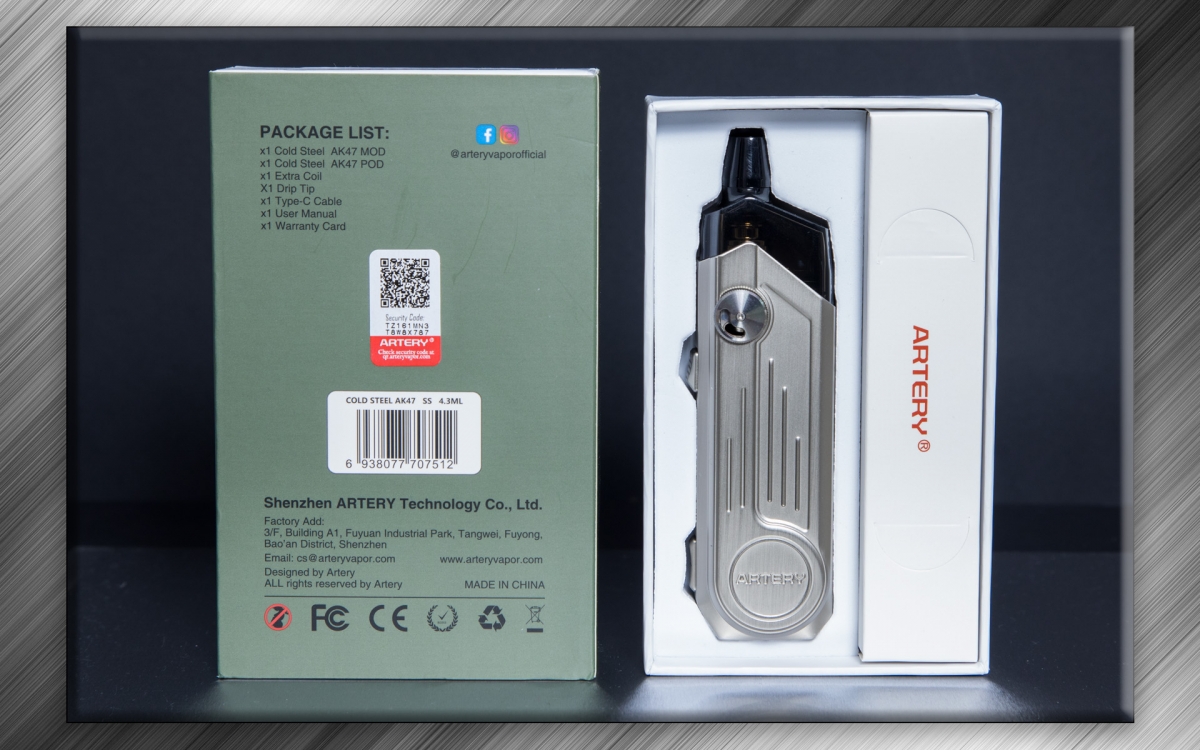 Artery aren’t known for piling in the extras, no spare pod or bits n bobs, but I did notice the additional drip tip for MTL, and the USB-C cable was a decent and useable length. 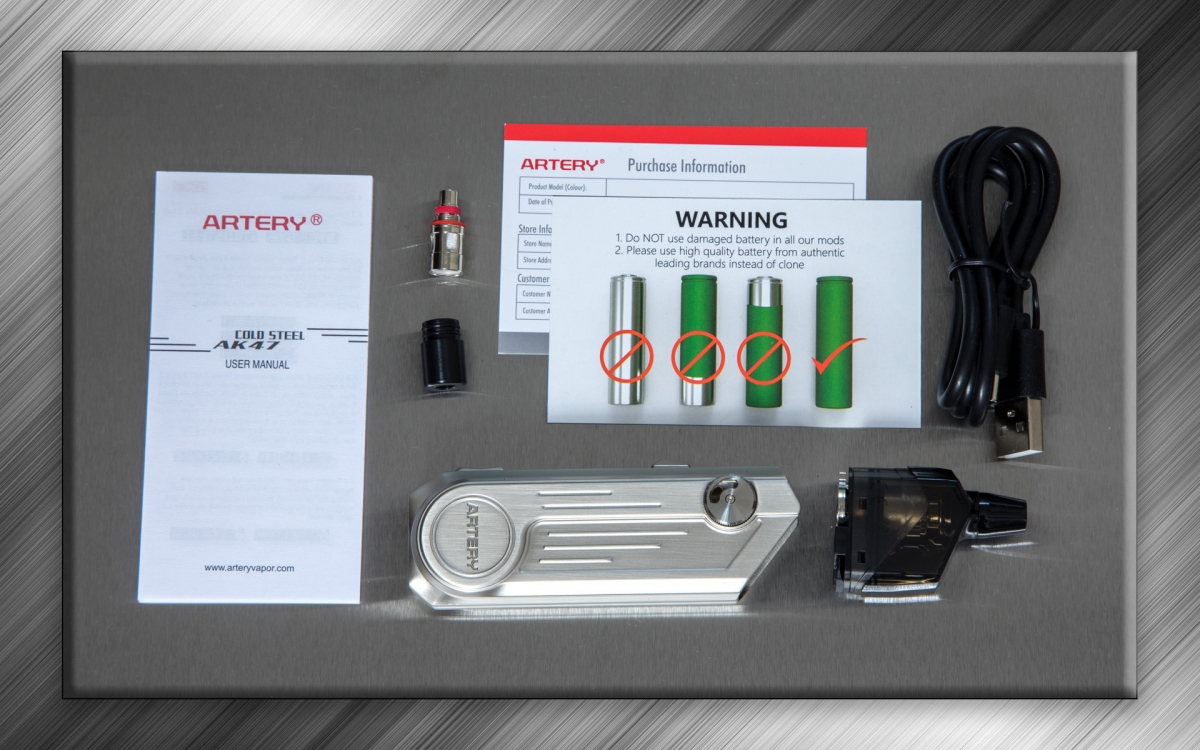 I chose the HP version as I already love these coils, especially for MTL, but there are three different options for you to choose from: HP/XP/NP pod versions are all the same except the actual pod and coils:

Picking up the AK47 for the first time, you notice how solid and weighty it is, deceivingly so as it’s only 125g. This is so far typical of the Cold Steel range and I really like it as something different. I have no preference as I appreciate really lightweight stuff but I also like some heavy kits too. This is pocket friendly but definitely not shirt pocket. It does feel a bit different in the hand as it feels really tactile with all of the chassis moulding. There are no hard edges and the fire button (or trigger?) feels intuitive for either index finger or thumb firing. 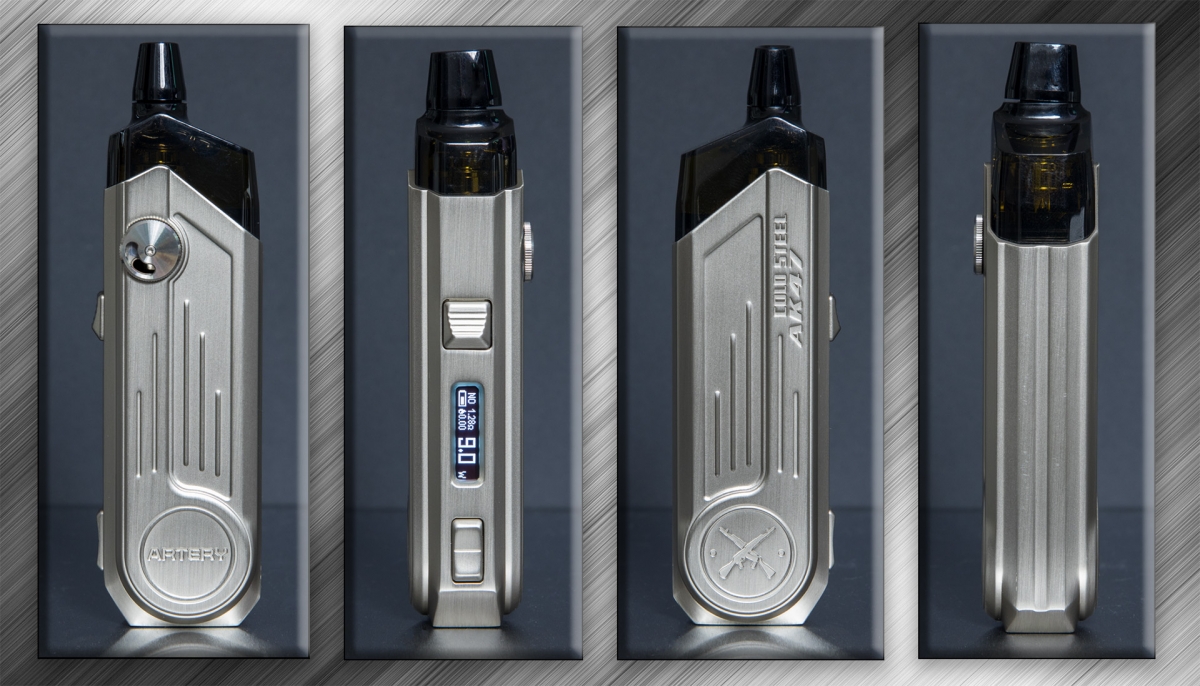 It just looks so ‘art deco’ to me. If they removed the ‘AK47’ and the guns lower embossing, they could have easily called it Art Deco, though you can loosely see the AK47’s shape somewhere in there. If you’ve seen Artery’s official page then it is more than blatant that they are trying to appeal to gun fans. Personally I found it off-putting but I saw past it and really loved the actual mods shape. 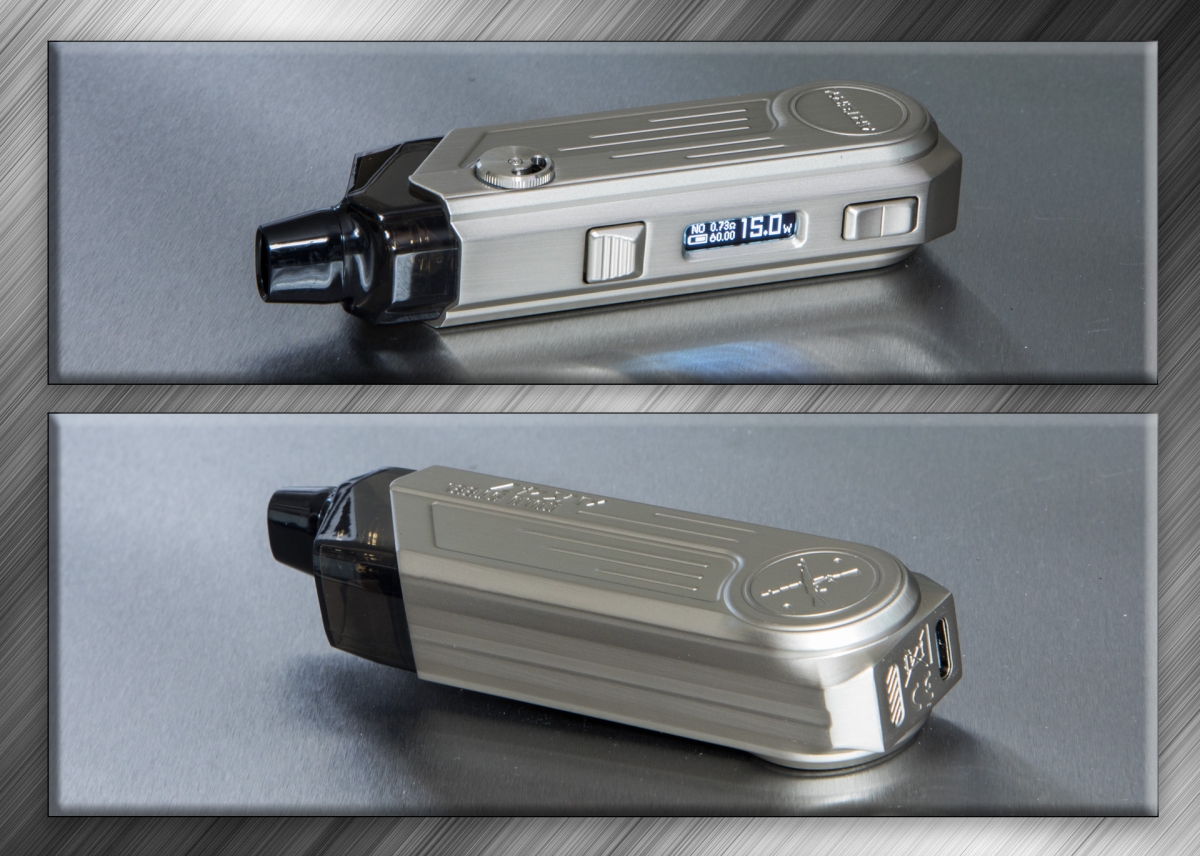 Hats off to the designers on this kit, every single face and feature is well thought out and interesting to look at and indeed feel, usually there’s always something you would have preferred to be different but as a design, it simply appealed to my tastes.

The mono screen is pretty small but I generally managed to navigate it without reading glasses.

Again, the designers did well in sculpting the shape of the pod. The only down-side is that it doesn’t suit the 510 drip tip as it is sculpted to accommodate the DL ducks bill one better. I wish they had produced a narrow bore ducks bill drip tip instead. 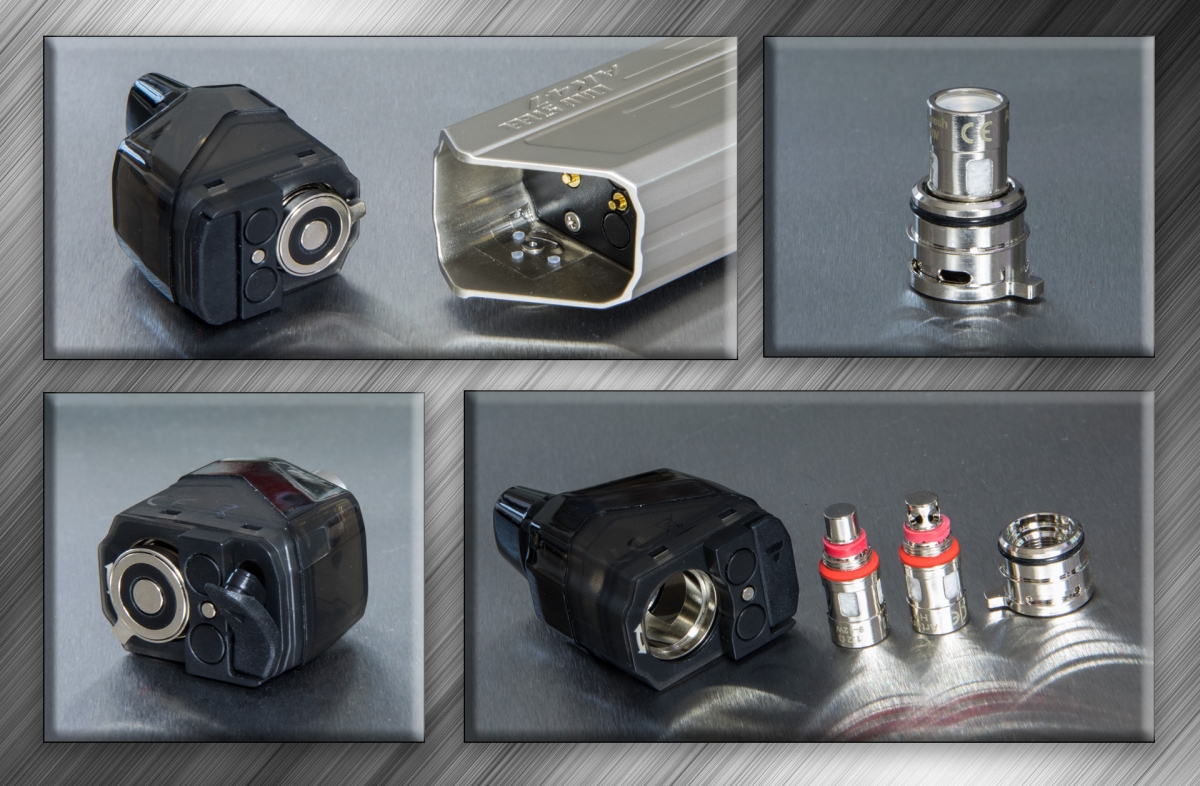 It fits into the mod perfectly, there is zero play and the magnets hold it into place firmly, but it’s still easy enough to pull out as there’s plenty of it protruding to get a grip on.

The first thing I noticed was the little airflow lever under the coil which is a really welcome touch along with the mods rotary airflow control, so you can really fine tune the draw. The ‘easy’ filling bung is on the base. I will give it to Artery that it is easier than most to open and shut, plus there’s plenty of room to get your liquid nozzle in without causing air-locks.

Loading a bullet into you AK47….. erm I mean fitting your coil into the pod is plug n play style and there’s no location tabs to annoy you. It was a little tight though and I had to use a coin to pry it out, just a minor niggle though and it’s not like you do it often.

You may notice the additional connection on the base of the pod. This is the rather clever “E-juice detectable technology” which detects when your ammo is low. This feature was also on the AIO but was less effective due to which way round you vaped and your liquid tipped. So far it has been much better on the AK47 and is pretty useful. That said, it’s pretty easy to see your juice level in this pod.

It’s a pretty simple chipset and is easy to navigate:

That’s the lot and I didn’t find the need to read the manual to work the functions out. 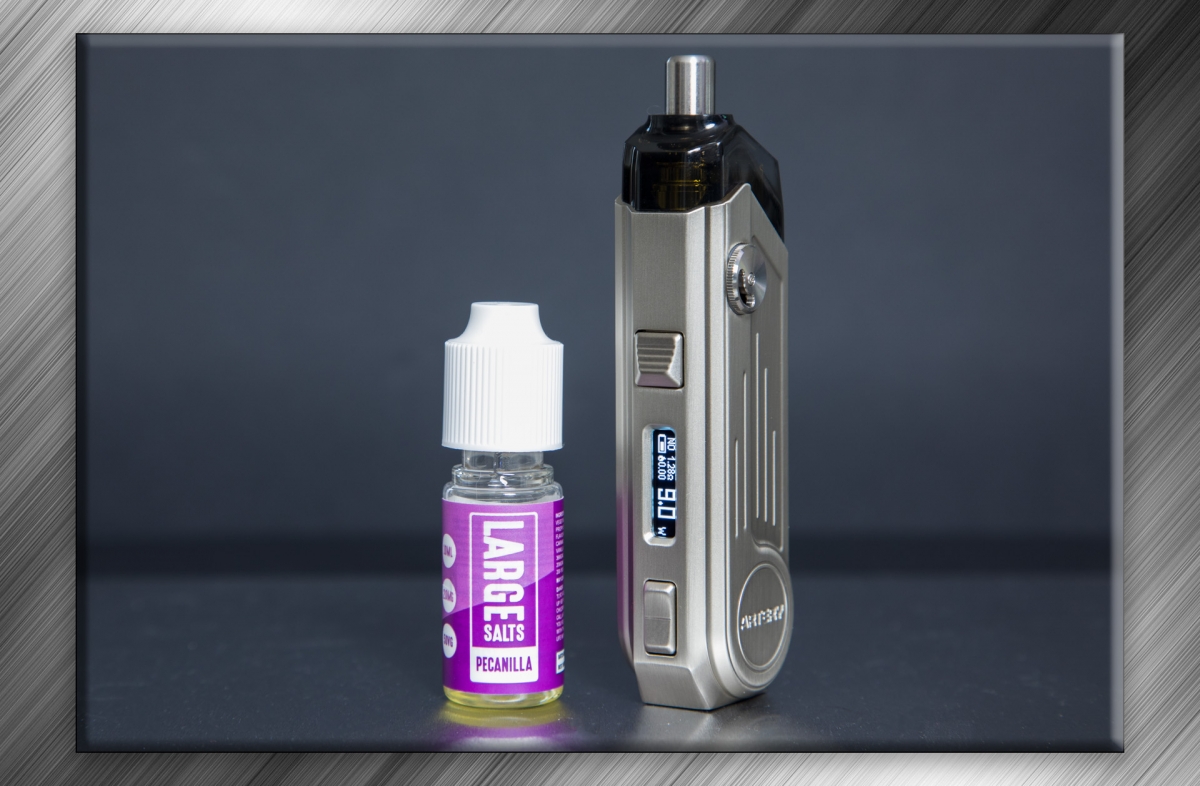 In short, the AK47 performed perfectly. The flavour from the HP 0.7ohm/1.2ohm coils seemed to be better than I remembered the HP coils being. I don’t know if Artery have revised them, but either way they are on par with the best for flavour.

I mostly used the AK47 for MTL. The dual airflow control worked a charm and with a combination of the two, I could get a cheek pulling tight draw. You can just about get a restrictive DL draw using the 0.7ohm coil with both airflows fully open, but it was just a bit too tight. I would say this kit excels in MTL mode overall and I’m very happy with that.

Handling wise, it felt so comfortable and I found myself thumb firing mostly. The fire button (trigger) is easy to find in your hand without ‘rifling’ around. The resistance was just right, the adjustment buttons were never in the way and there was slim chance of accidental adjustments. You can of course lock them, but I didn’t find the need.

Auto-Wattage worked really well. It tended to set it to the lower range and you can adjust it up to the coils limit. The clever part is it won’t let you stray past that and just round-robins back to 5 watts, so even if you managed to accidentally adjust the power, then you would never get a dry hit.

You can turn this feature off but I’m happy with the vape warmth produced within its range, and it also increases the coils lifespan.

My one and only niggle was the 510 MTL drip tip. This felt like an afterthought as it is very basic and bland, it works well enough but didn’t look right. I ended up using one of my own in the end.

Battery life was good as to be expected with 1500mAh which easily lasted me all day at 11 watts MTL. Charging was pretty fast and it took around 40 mins from low to full. 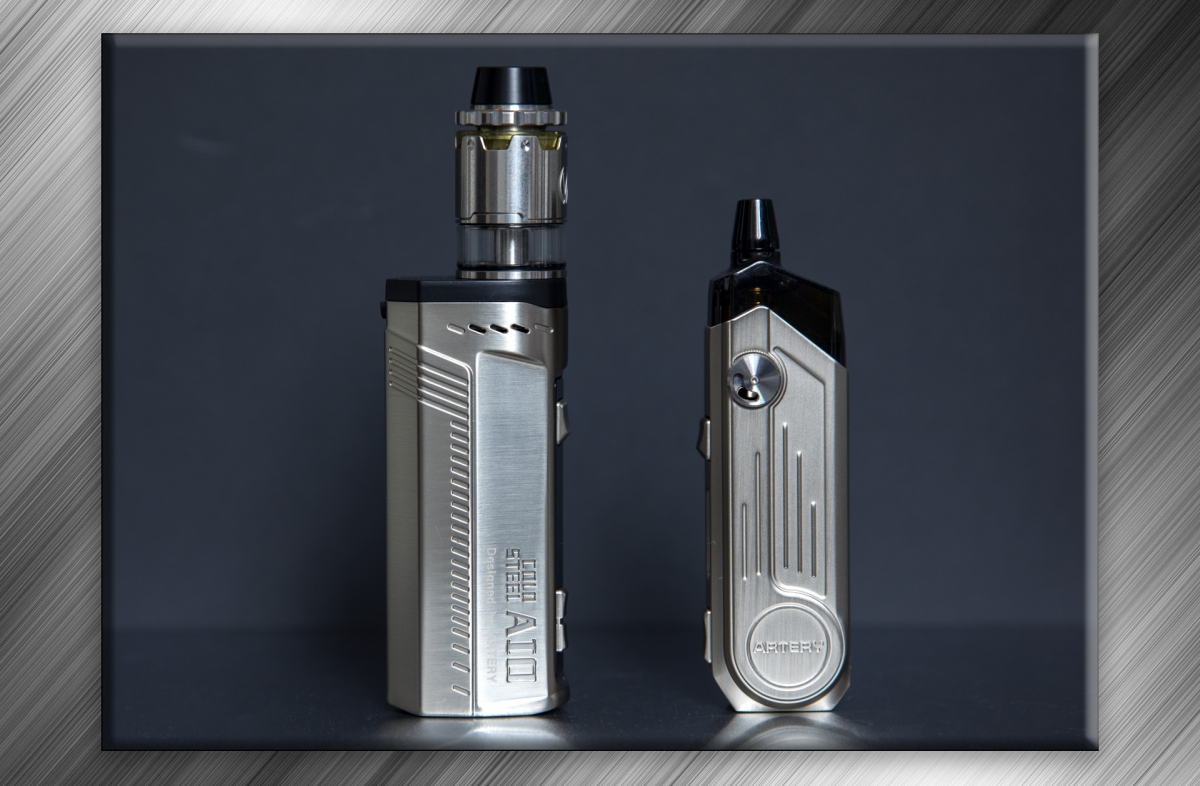 If the gun thing doesn’t bother you and you enjoy MTL, then the Cold Steel AK47 is a bit of a no-brainer. Perhaps the weight might be off-putting to some but it’s not that heavy, 125g without juice. Generally it’s just such a good MTL device. I’m spoilt for choice recently with MTL pods and tanks, and the Cold Steel AK47 makes choosing that bit trickier. It certainly will be in my ‘arsenal’ for some time.

Is it worth it? Absolutely worth pulling the trigger on as there’s plenty of bang for your buck(shot).

If you cannot get past the whole gun theme then nobody's holding a gun to your head, so don’t buy it but please don’t ‘bang’ on about it. 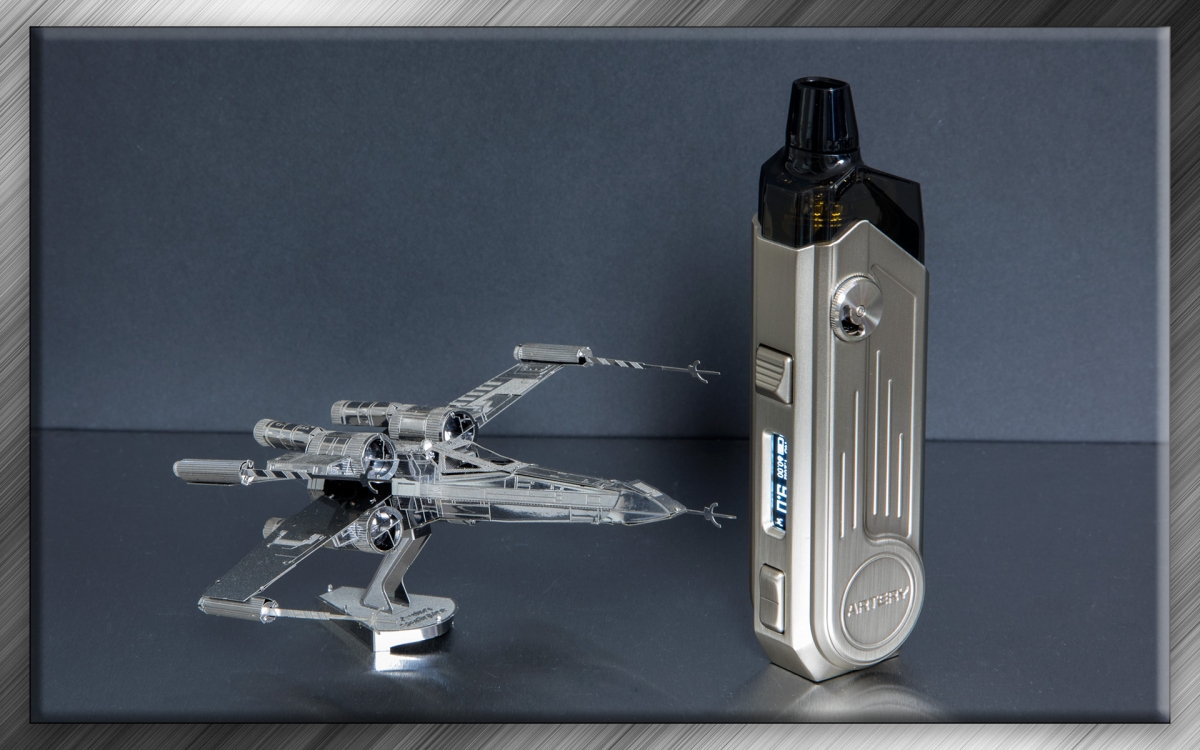 I think I managed to get through this review without overdoing the ‘gun’ thing, it certainly didn’t bother me. It reminds me of the Smok Mag controversy, that looked naff all like a weapon but folks still slagged it off for glorifying guns. I don’t think it does. Had it been a proper gun shape, I would have thought differently. This is a fine art deco pod system in my eyes, and a bloody good one at that.

(For the record; I am anti-guns – Light Sabers though, I’m all for em!)

Score: 8.5/10 – Artery have produced yet another fine MTL device.