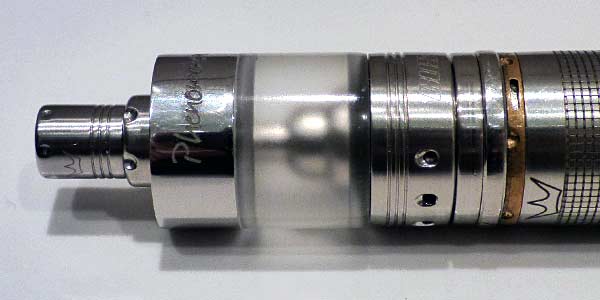 The Phenomenon Lite is one of several RTA’s manufactured by Gus Mod. It is 22mm in diameter and features both top and bottom filling. One advantage is that Gus atomizers are fully compatible with each other so if you prefer the more restrictive airflow of the Phenomenon Zest you can use that deck with the Lite. In addition Gus have recently released the Momentous tank which has even more airflow than the Lite but the great thing is that you can simply buy the new deck to fit to your Lite if you wish.

I picked up this tank in excellent condition second hand but since it didn’t seem heavily covered we felt it was worth featuring in a review.

That is all that is included for your money! If you want a drip tip you will have to buy it separately. I was lucky because I picked this up second hand and it also came with a Bell cap, a spare stainless top cap and a spare airflow ring.

One thing I will mention is the excellent service you get when ordering from Gus Mod. I have ordered several other items and if you choose the express postage it will arrive in 48 hours which is seriously impressive when you consider it is coming from Athens. 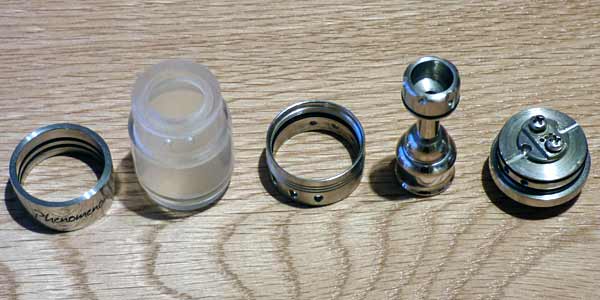 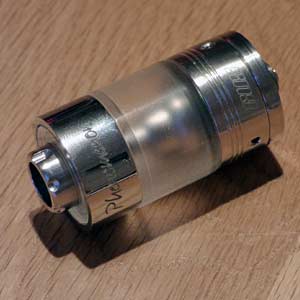 This is a nicely put together tank and everything fits really well. The version I purchased was the polished one and the finish is excellent. The tank itself does not feature lots of engravings and the only noticeable ones are the words “Gus” as well as the Crown logo. In terms of looks it is rather stylish and if you have the bell cap it looks seriously cool! In many ways the standard version is very similar to a Kayfun Lite in looks but since it’s not a particularly tall tank it tends to look good with most mods.

The clear tank section is made of PMMA which is used in aircraft windshields so is far more resistance to cracking than conventional plastic but you still shouldn’t be using tank cracking juices. One interesting feature is if you remove the stainless steel top cap because underneath you will notice that the PMMA section narrows and has two small fill holes. In terms of practical use this filling method will only work with needle top bottles or syringes because there is no way you would ever get a standard juice nozzle in there.

The base features the adjustable airflow ring and you can either have all three air holes opened up or use it with two or one depending on how tight a draw you prefer. The airflow ring can be detached and if you have either the straight PMMA tank or bell cap you can dispense with it entirely since both of those tanks feature air holes at the base and you simply rotate the tank section to adjust the airflow. 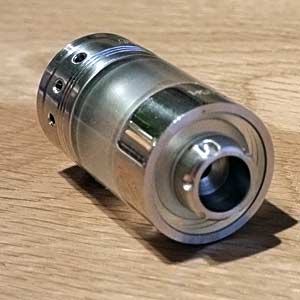 The Phenomenon Lite features juice control so you can happily run high VG juice in it. In addition the juice channels in the deck are reasonably wide. The deck itself is very similar to a Kayfun Lite but instead of one air hole it has two. One is 1.0mm in diameter and the other is 0.8mm. The posts have two Philips head screws that seem well made and they trap the wire without any issues. The deck itself is raised ever so slightly and features a small ledge on each side for your wicking to rest on very much like a Kayfun but not as tall.

The base features a brass 510 pin that is fully adjustable although you may never need to since this tank sits perfectly flush on all my box and mechanical mods. As mentioned there is no drip tip included by all the ones I have used fit the tank well. Ideally it is better to use drip tips that feature double O-rings since the juice flow control is adjusted by turned the drip tip.

This tank has a decent 4ml capacity but it is reduced ever so slightly if you have the bell cap fitted. The deck is fully removable without draining the tank but you do need to make sure if it has any juice in to keep it upside down as well as ensuring that you have closed the juice flow. 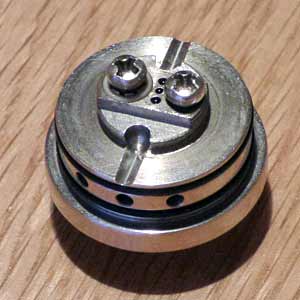 The Phenomenon Lite lends itself to a very straightforward build. I used 28AWG (0.32mm) Kanthal wrapped around a 2mm screwdriver. My final resistance was 1.2ohm. There isn’t a huge amount of space between the screws so I wouldn’t really recommend coils with an internal diameter higher than 2.5mm. Wicking is simple and you only need a reasonable amount of cotton in there. It does help to fluff it up at the edges and you want to saturate it with juice so it keeps in position on the small ledge above the juice channels.

Filling can be accomplished by one or two methods. Either detach the stainless top cap and use a syringe or needle bottle to fill. Alternatively you can unscrew the deck and airflow control and fill it up from the bottom. It is actually far easier if you have the straight PMMA tank or the bell cap because since they have the air holes drilled into them you only need to push up the tank section higher than the double O-rings to have enough room to fill. Take care when doing it this way because you don’t want to push off the PMMA section and end up with juice in your lap. Also be certain you have closed down the juice flow or you will flood the chamber when filling.

How does the Phenomenon Lite vape?

As I mentioned this tank looks a lot like a Kayfun Lite and has many similarities but the vape is in fact very different. The Phenomenon is definitely more airy and it leans towards a cooler vape than the typically warm Kayfun. In terms of flavour this tank was a real surprise to me because it is extremely good. Sure it’s never going to be Rose V2 kind of flavour but it does make for a highly flavoursome vape!

When you’ve tried a few RTA’s you begin to notice that certain juices seem to suit some tanks better than others but in the case of the Phenomenon it seems to do very well with most flavours. In my opinion it positively excels with fruity vapes! I used House of Liquids Green Apple and it was gorgeous with truly mouth-watering levels of flavour. The crispness of the apple came through beautifully and it made for a cracking vape!

The next juice I tried in this tank was VGOD Dewbie and the honeydew melon and cream was delicious. Being much higher in VG it was necessary to open up the juice flow but thankfully not once did I get a dry hit. 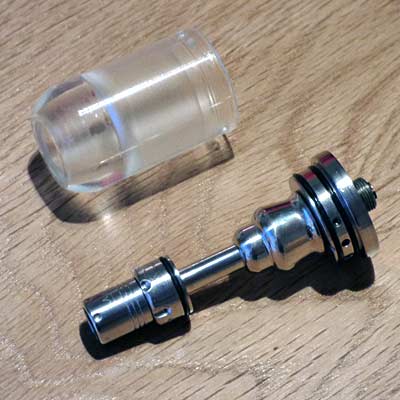 After once again cleaning the tank I decided to try Manabush Coyote Coconut in it. Now Manabush is truly outstanding juice but depending on which flavour you use it can be quite different in terms of taste. For instance Powwow tastes very different in three of my tanks although all of them are still a really nice vape. Coyote in this tank is truly phenomenal (please excuse the pun). It really is that good and the coconut comes through magnificently and has a real sweetness to it. The biscuit/tobacco base is certainly noticeable but if you love coconut like me then you’ll be in Heaven!

I did finally try the tank with a little Powwow and while it was nice it seemed to boost the maple more and seemed to heavily enhance the custard with the tobacco/biscuit seeming a little lost. This wasn’t a big deal to me since I have other tanks which I prefer to run this particular juice in.

On the whole the flavour you get with the Phenomenon Lite is seriously good. In regards to vapour it does put out a decent amount with the airflow fully opened up. It certainly won’t create huge clouds but that isn’t its intention. The draw does cater for both a mouth to lung and a direct lung inhale but when lung inhaling it you may find it still a little restrictive so consider the recent Gus Momentous if you like an even airier vape. Personally I prefer it as a mouth to lung kind of vape.

I haven’t had any major leaking issues with this tank but on occasion you do get a few small droplets of juice near the base air holes. With the bell cap this is easily cleaned but with the stainless airflow ring it does mean you can end up with a little juice trapped there. In many ways this is a slight design flaw and you can see why the latest versions have done away with the airflow ring.

In my opinion the Phenomenon Lite offers a seriously good vape! It is certainly a little inconvenient when filling if you only have the standard version but on the whole it is still a very worthwhile tank.  For anyone who prefers single coil Kayfun style decks this will certainly appeal and it is certainly straightforward enough to build. It is a lot more airy than a Kayfun Lite and the flavour you get with this tank is seriously good! In terms of price it is a little bit more expensive than an authentic Kayfun Lite. Thee standard Phenomenon Lite in either polished or matte finish costs €99.00 and at the current rate of exchange that is £69.30. The newer model Phenomenon X with air holes drilled into the tank is cheaper and is priced at €90.00/£63.00 and it might be a better option since it does not include the stainless airflow ring. The Momentous is also available should you require even more airflow and keep in mind most of the parts are compatible. 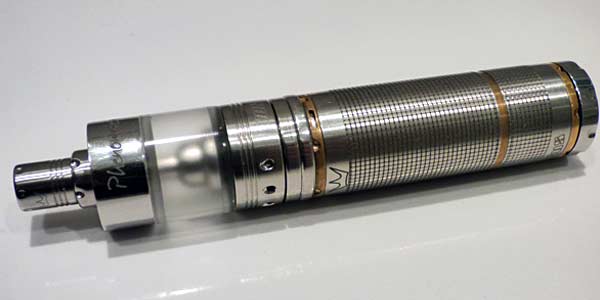