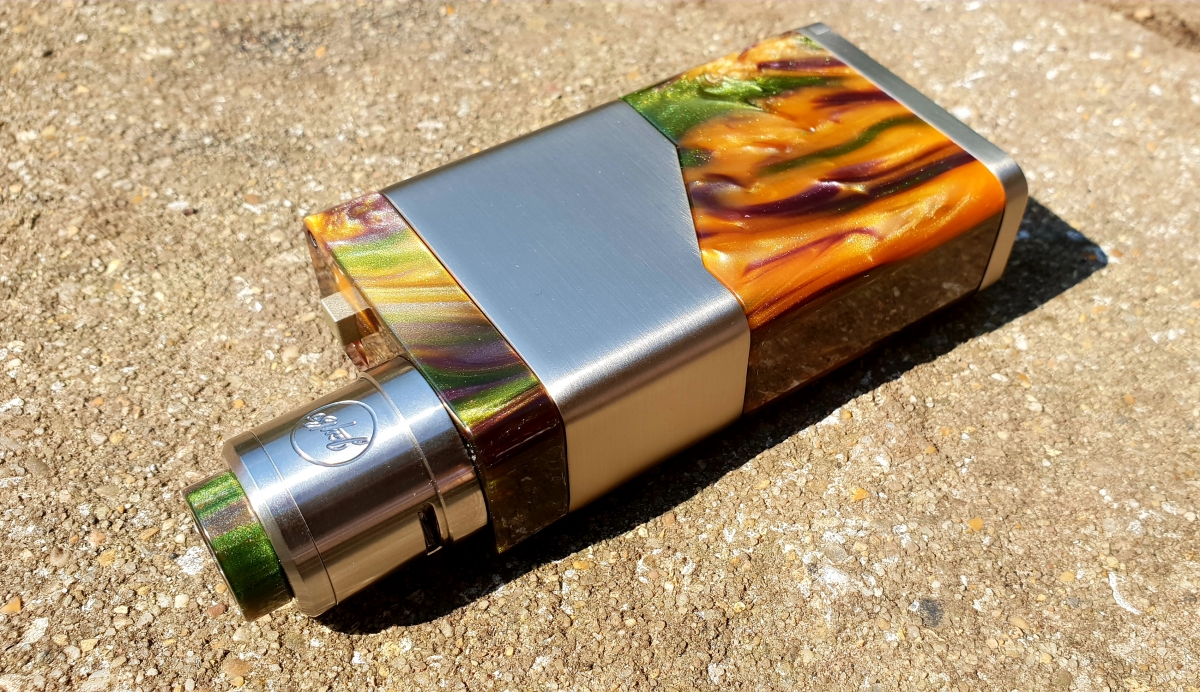 The Wismec Luxotic NC Dual 20700 250W Kit with Guillotine V2 RDA is one of the latest kits from Wismec designed in conjunction with JayBo to offer a seriously high powered, cloud chasing experience!

It comprises the Wismec Luxotic NC Dual 20700 250W mod (or Wismec Luxotic NC for short), and powered by two 20700 or 18650 batteries it is able to be used in series or parallel output modes. It offers adjustable voltage from 1V to 8V, and a maximum power output of 250W. Multiple safety protections are also built in!

Wismec's new Guillotine V2 RDA is also included in the kit, which is a 24mm two post RDA designed with plenty of airflow available for massive vapour production!

One of the first aspects I noticed when I took the Wismec Luxotic NC out of the box was just how large it was, this is definitely a big old unit! It measures in at 54.5mm x 26.6mm x 96.2mm, and it's pretty weighty too at 186.2g. 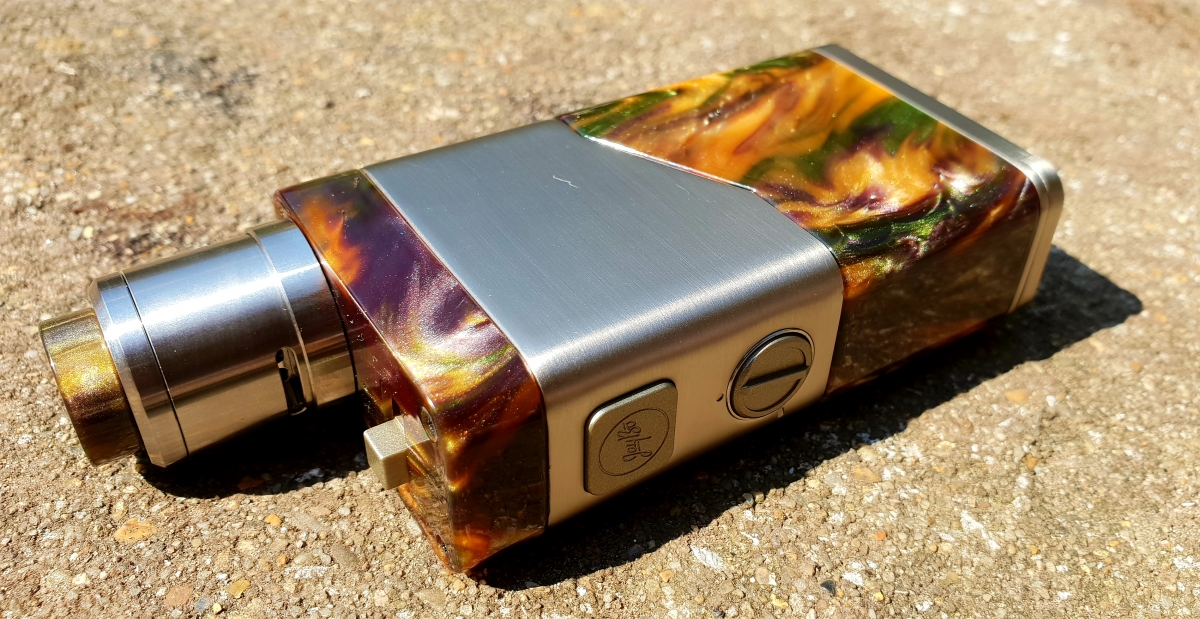 Looks wise, the Wismec Luxotic NC sports a stunning resin styled finish, with green resin and red resin options available, and I found the finish to be completely flawless on my unit. It contrasts well with the stainless steel that runs around the device, making for a visually appealing unit!

A stainless steel battery door cover at the base of the Luxotic NC allows you to insert two 20700 batteries, or by using the supplied adaptors you can also use two 18650 batteries. 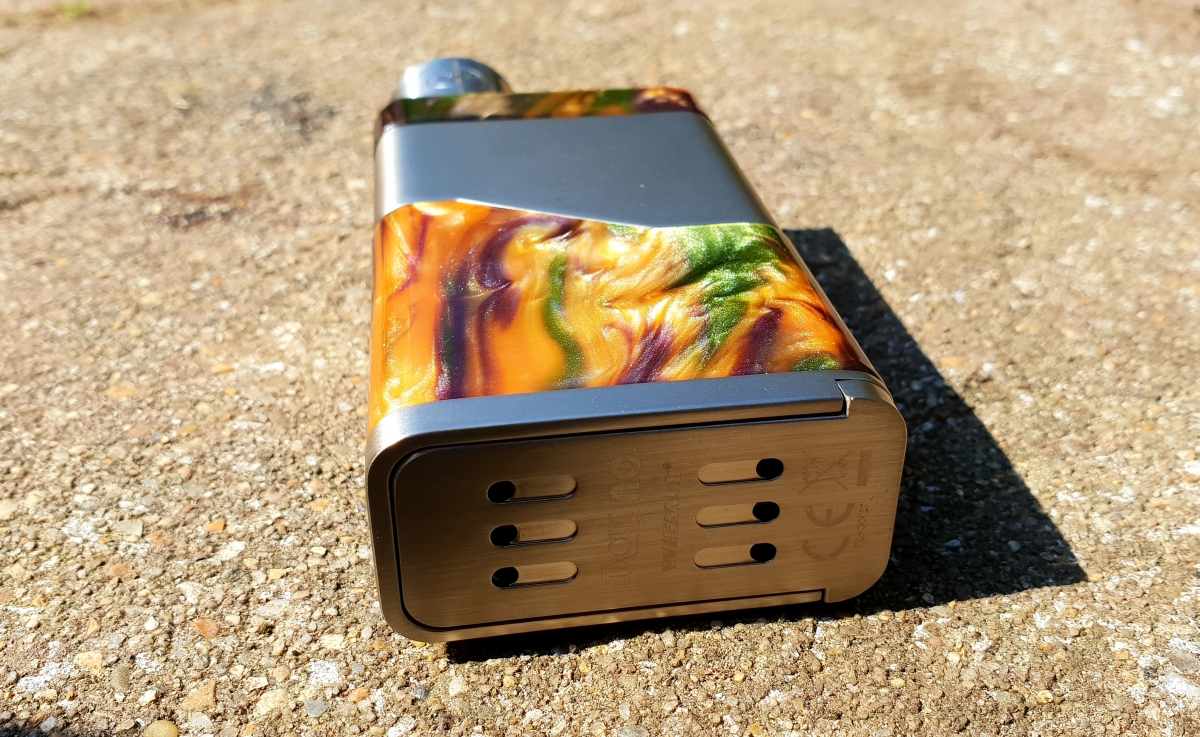 At the top, a spring loaded 510 connector is found, allowing for a flush fit between your atomiser and the mod. There's also a switch which allows you to switch between series or parallel output mode. At the side of the Luxotic NC is a large, square shaped power button featuring the JayBo logo, and underneath this is the voltage regulator dial. 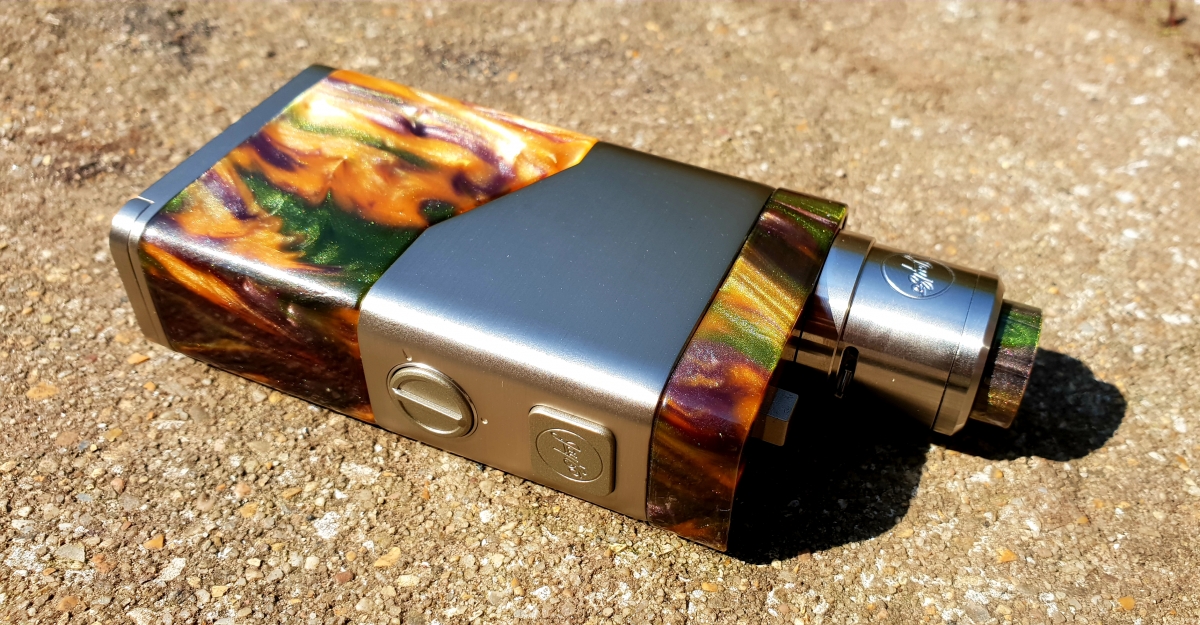 Wismec's new Guillotine V2 RDA also comes in the kit, and this is a 24mm width RDA manufactured from stainless steel, and it features a resin styled drip tip which matches the finish of the Luxotic NC!

Two large adjustable airflow slots are found on each side of the top cap, and a stainless steel beauty ring helps to reduce the gap at either side of the RDA, making for a more aesthetically pleasing look.

A large build deck is found on the Guillotine V2 RDA, which features a large deck with two posts, both posts have huge cut outs for post holes enabling you to use a wide variety of different sized coils. Two 0.28ohm Clapton coils are included in the kit, which are dead easy to install on the deck.

You have the option of using either series or parallel output modes with the Luxotic NC, simply by toggling the switch on the top. I'll cover how both functions work in the Performance section below. 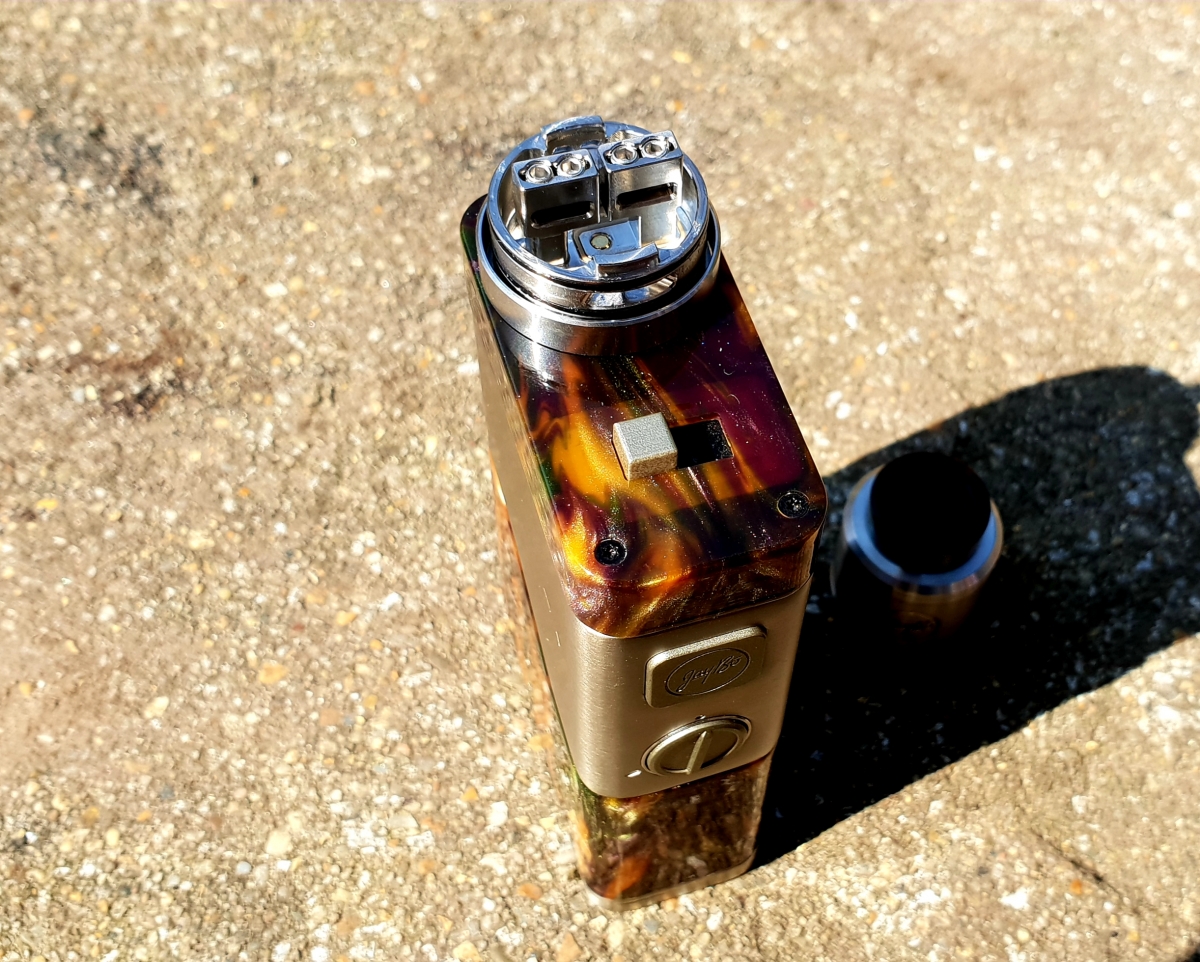 As mentioned above, there are two ways of vaping on the Luxotic NC - with parallel and series output modes available to use.

Firstly, using the Wismec Luxotic NC in parallel mode will offer increased battery life over series mode, and the output power will max out at 4.2V. The amp draw on your batteries will be halved across the two, and you'll be able to vape for longer in parallel mode. 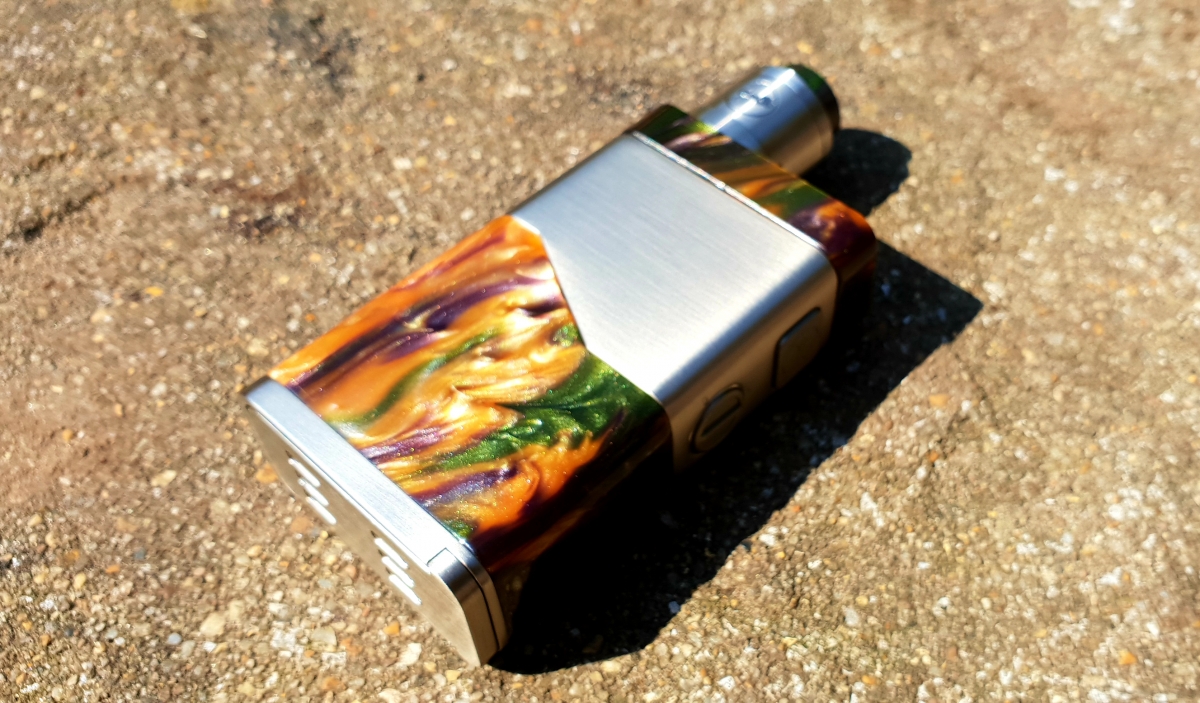 However if you really want to get some serious power out of this device, then use series mode! You can adjust the output power from 1V to 8V when in series mode, and you really feel it too, as it hits very hard indeed! The chip will limit the output wattage to a maximum of 250W but you still need to make sure your batteries are up to scratch and can handle the amp load, if you are using this in series mode at 8V then the amp draw will be almost double that of parallel mode. I'd recommend building coils that have a resistance absolutely no lower than 0.26ohm - to be honest I havent felt the need to use anything lower than 0.4ohm!

Thankfully Wismec have designed an RDA that is up to the task of handling the Luxotic NC in series mode, and that is the Guillotine V2 RDA. This offers great flavour, but it excels at vapour production and when in series mode, it really shines with some room filling clouds!

The Wismec Luxotic NC is a serious beast of a unit, and to get the full power from this device you'll want to be using it in series mode. Tread carefully thought, as it can hit hard, very hard indeed! The Guillotine V2 RDA is a great pairing with the Luxotic NC, able to throw out big clouds with ease. If you are in the market for a powerful kit to chase clouds with, this is well worth considering!

Many thanks to Rick at TECC for sending the Wismec Luxotic NC Dual 20700 250W Kit with Guillotine V2 RDA in for review, which you can purchase here! Don't forget to use POTV20 for 20% off - not to be used on products containing nicotine! 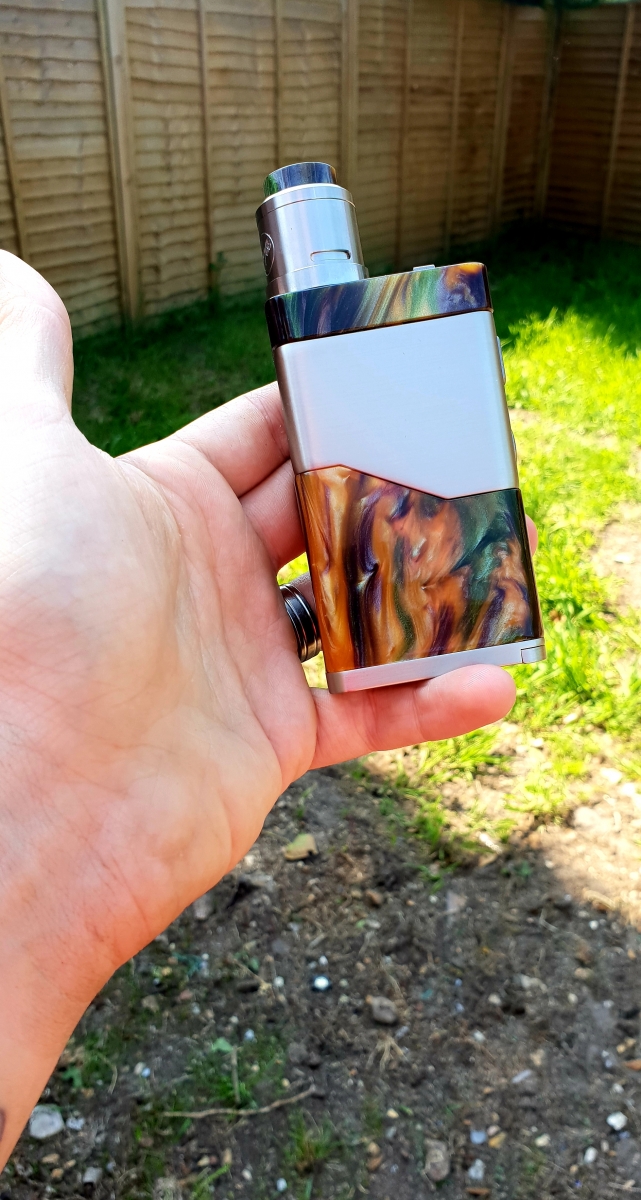