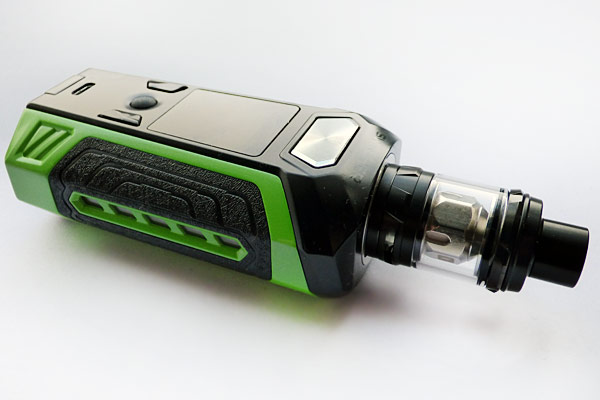 The new Vaporesso Switcher Starter Kit was originally going to be called the Transformer but changed before release, most likely due to trademark issues or a bunch of Decepticons taking exception.

The Switcher is a 220W device which features both Variable Wattage and Temperate Control modes. Powered by the new OMNI 2.6 board the device has support for all major wire types and comes bundled with the NRG 2ml tank featuring dual airflow, top filling and a 2ml capacity.

One major feature this device offers is the ability to “transform”, but before you get super excited thinking it will change into a hoover and clean your home for you… rest assured it won’t since I tried that already. Joking aside the Switcher mod allows a user to personalise the device by switching out to alternative casing sleeves which are sold separately.

So without further ado, let’s take a good look at this kit and see what it has to offer you! 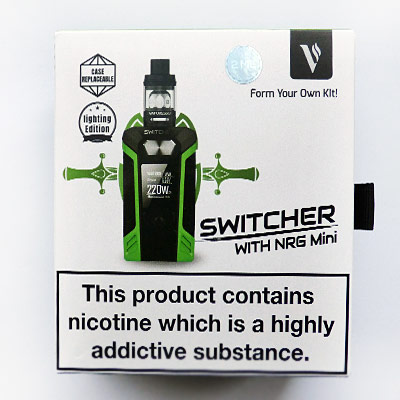 As mentioned earlier the OMNI 2.6 board in the Switcher offers up to 220W of power. The most noticeable feature of the Switcher is the solidness of the construction. Remember those built like a brick devices we used to be able to buy? Well this is exactly like one of those and I dare say you could drop it a few times without inflicting any major damage. Everything is extremely well fitted and seems designed to last. 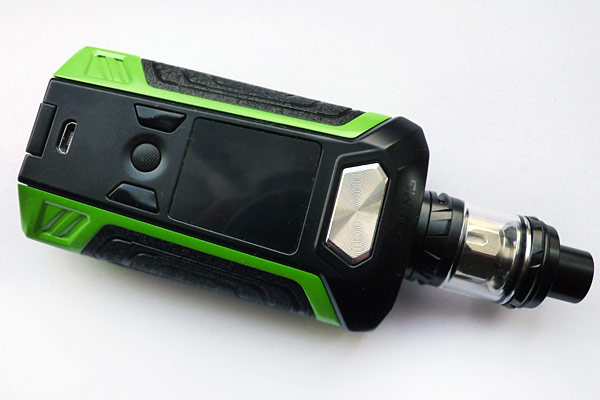 With batteries fitted this device is rather weighty which is surprising since it mainly uses Zinc Alloy construction. As a comparison to other dual 18650 devices I would say it feels heavier than the SX Mini Q Class, the Therion 166 and the SMOK Alien 220W. If you were to carry this device around with you then you’ll certainly notice it.

The Switcher is also very wide which doesn’t make for the most immediately comfortable ergonomic design despite the rounded edges and when you compound this with the weight it makes the Switcher feel a little unwieldy initially. In fact to an extent I really wish Vaporesso had tapered the sides of the device in a little more but you do get used to it. 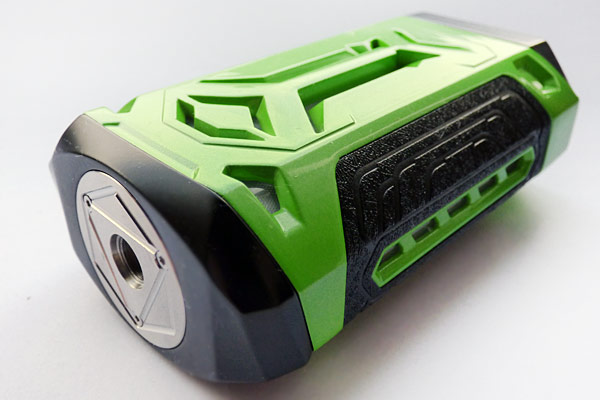 On the whole I found the device to be very pleasing aesthetically. The vibrant green contrasting with the black really makes the device stand out, the Green Goblin would love this model! Given that you can also swap out the casing, providing you are willing to spend a bit more money (typically £9.99 per case) allows for some level of individual personalisation. The anodized finish seemed to be of a good quality, so is unlikely to tarnish anytime soon. The 510 pin seemed durable and I had no issues fitting any of my other tanks or RDA’s to this device.

The 510 connector is very large and while this is certainly useful if you own larger atomizers, it tends to look a bit odd with the included highly compact NRG Tank fitted. Of course that primarily depends on one’s own personal taste.

One design decision which may or not bother you is the location of the main fire button. Unlike other devices it is not fitted to the front but instead to one side of the device so you have to side press it with your thumb. I personally found this a little uncomfortable. I guess it really doesn’t help that the vast majority of my devices have the fire button fitted to the front or set up as a trigger, so it’s really an individual case of what you are used to. Nevertheless the fire button works well and despite feeling a bit stiff is very responsive.

In addition to the fire button the device features three other buttons, all of which are responsive and rattle free. The main display is great being very well set out and uses quite a large font so it easily readable by older users such as myself. The brightness is good and the menu is set out in an intelligent user friendly way. All of the information you would expect is shown and there are also other additions such as the puff counter and a clock. The menu also includes an option called the Custom Curve Wattage. What this allows you to do is adjust the Wattage per second of firing. In addition there are other features such as setting Soft, Medium or Hard vape modes. Temperature Control Mode has compatibility for Stainless Steel, Nickel and Titanium, and the device also includes memory modes along with a Bypass setting for those who want a mechanical mod style experience. 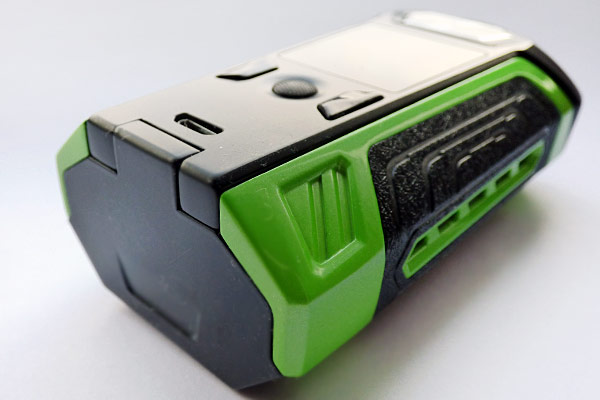 For those users who prefer a bit of bling the device features the typical psychedelic light show trend, which can be changed to display single colour or switched off entirely. Personally I wouldn’t use it myself, but at least the option is there for people who want their mods to be suitably expressive!

The Micro USB port is sensibly located at the bottom front of the device. It is also fitted horizontally so you can keep the device upright while you charge it. The battery compartment door worried me initially since it seemed to open a bit too easily but once I had fitted the batteries it wasn’t a problem. Battery orientation is clearly marked on the inside of the battery door. There is no apparent ventilation for the compartment but I suspect some air circulation is provided for by the recess in the compartment lid. I certainly encountered no issues with the device running hot even when vaping at 90W. 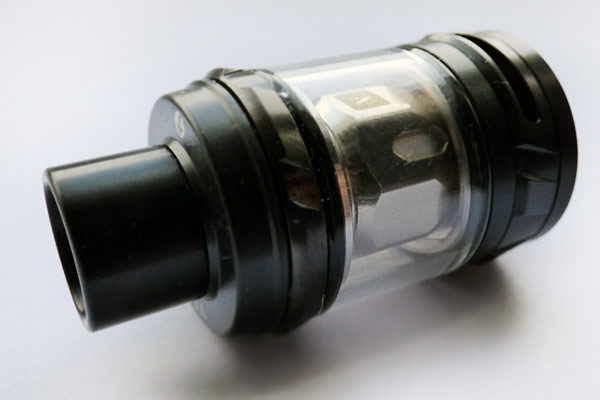 The included 23mm diameter tank is highly compact and well put together. Yet it tends to look positively dwarfed by the Switcher device. In fairness this is probably in part due to the TPD 2ml tank regulation and not the fault of Vaporesso, since if you’re not buying this in the EU the tank is 26.5mm in diameter and has a 5ml capacity, which in my opinion would probably look far more complimentary.

The airflow ring features dual slots and this means it is a very airy vape suited to lung hitting users. Even when the slots are almost closed off it still is quite airy and offers a slightly restrictive lung inhale style of vaping. It would be best to say that a vaping newcomer will have to know for certain that they will enjoy this style of vape especially when they are used to smoking mouth to lung. Of course you don’t have to use the tank if you just happen to like the overall style of the device. 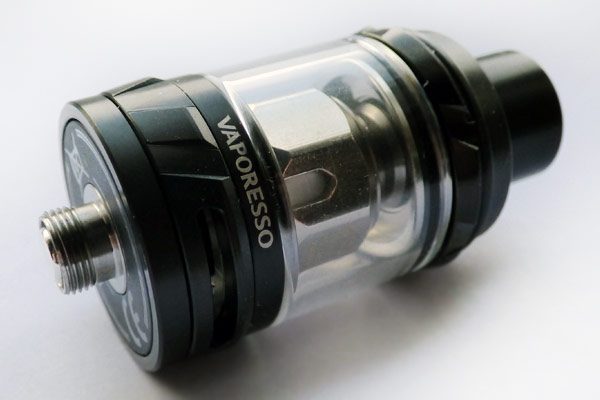 The tank features a push to open top/cap which exposes the filling slot. The slot isn’t exactly huge but should be fine for most typical bottle nozzles. A 0.15ohm coil is pre-fitted but on the tank I was sent the coil was very difficult to remove and had become almost secured to the chimney. I’m certain this was just an isolated incident and with a bit of effort I can probably remove it when breaking the tank down for cleaning. Nevertheless I filled up the tank without priming the coil, left it for about fifteen minutes and had no issues with any dry hits. A wide bore Delrin drip tip is included with the tank and it can easily swapped to another from your collection since it uses a standard 510 fitting. 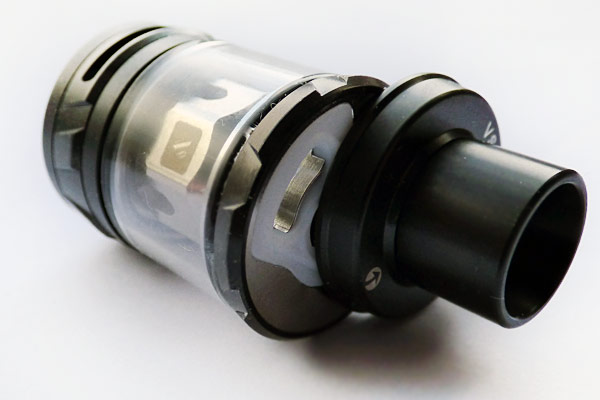 The device is very straightforward to use and the menu is set out in a very approachable and logical way. Having an extra button to access the device mode is helpful and you can easily lock the device by clicking the fire button three times. This device like many others on the market will also ask you to confirm when you are using a new coil.

In my opinion the manual is thorough so it’s unlikely you will have an issues. 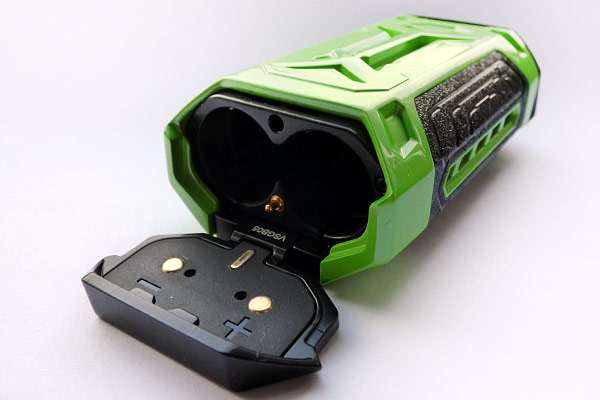 Making use of the pre-fitted coil I filled up the tank with some Momo Lolo Black Cola. I allowed at least fifteen minutes for the coil to fully saturate before taking my first vape at 35 Watts.

At this Wattage it was a cool vape but the flavour was definitely distinct. After a few minutes I increased the Wattage to 55W. At this setting and with the airflow half closed it was just right for me. There was plenty of heat, delicious flavour and great cloud production.

Upping things to 75W it started to get a bit too hot for me, flavour was better and vapour production was excellent. I pushed the coil to 90W and flavour was a touch better but I had to fully open up the airflow or things got way too hot. Of course the amount of vapour I got was really awesome! The only really downside of this Wattage is that it devours your juice and occasionally borders on a dry hit so I would suggest you vape in the 55-80W region depending on your preference.

Keep in mind that due to the TPD restrictions this tank has a 2ml capacity and it’s really easy to get through it quickly even when vaping at 55W. As long as you keep an eye on the juice level you won’t get a dry hit or risk burning the coil.

I tested out Temperature Control Mode using my old Sense Herakles Sub Ohm tank since after having a clear out, I came across some Ni200 coils I hadn’t used. Vaping at my typical 240°C resulted in a great vape and I encountered no issues with Resistance fluctuation or heat spikes.

This is a well-constructed device that should last you a decent amount of time. I suspect it might be very well received by some as a welcome change from the plethora of more cost effective and sometimes less robust mods out there. Yet that tougher build quality makes the device heavier and initially I felt the need for it to be a little slimmer. Of course after spending a sufficient amount of time with it my opinion changed and I enjoyed the fact that I had to be less careful with this device. In a way it reminded me of my old Sigelei 100W+ which I still have lying around and my SX Mini ML Class which has the build quality of a Challenger tank, and is far more likely to damage whatever you drop it on than the device itself!

The fire button location did feel a bit off to me for quite some time, but that is simply due to the devices I already own and once I used the Switcher regularly it became a non-issue. To be totally fair to Vaporesso it is a necessary design decision given the fact that the casing can be swapped out.

Functionality on the whole cannot be faulted and the NRG Tank offers a solid vape. In terms of ease of use, this is a highly accessible device for a new user, which works really well. If it happens to tick all the boxes for you then this would certainly be well worth your consideration!

Many thanks to Vaporesso who kindly sent this device to Planet of the Vapes for us to review. Vaporesso have kindly provided us with an extra Switcher Mod Starter Kit to give away to one lucky winner. For your chance to win this great prize please see our competition.