Vaporesso have had one hell of a year so far with regards to new products but potentially have gone one better than even before. Does the Gen release signal the next evolution in vaping mods, or are Vaporesso wrapping the same old present under a new coat of wrapping paper?

This was sent to POTV by Health Cabin, link and discount code at the bottom of the article.

Vaporesso, for a long time, have been a company on top of their game. Featuring hard working and well performing tanks, combined with mods that never fail, they have been a real go to company for vapers around the world. The Luxe with the Omni Chip 4 proved to be one of the very best on the market, featuring not only accuracy but a chip that packed more features than most of the companies dream of under the hood. So it was a wonder where they could go from there. Step forward the Gen 220W. The box mod that came with a simplified design and a chip set even better than before, it was both an underwhelming and exciting release. How does it perform and, more importantly, is it a must buy? Before we get into all of that, let’s break the details down first.

About the Vaporesso Gen 220W

The Gen 220W is a dual 18650 battery powered device capable of firing up to 220W. The device is a simple box mod design with a back magnetic battery door and front fire button with three navigation buttons. The box design has a silicone/rubber coated grip with a 510 pin on top able to house up to 27mm atties. The mod has a simple monochrome screen displaying wattage mode, ohms, battery indicator and seconds firing.

The mod comes with a menu system activated by three clicks of the middle button. This takes you to a simplified menu that gives you pulse mode, eco mode, smart TC mode, DIY mode and settings. The pulse mode delivers a hit every .02 seconds, which is more classed as your wattage. The smart TC works in conjunction with the chip, detecting coil type automatically to optimise performance of your vape. The Eco mode conserves battery life over the course of your capacity, and the settings covers the puff counter, brightness etc. 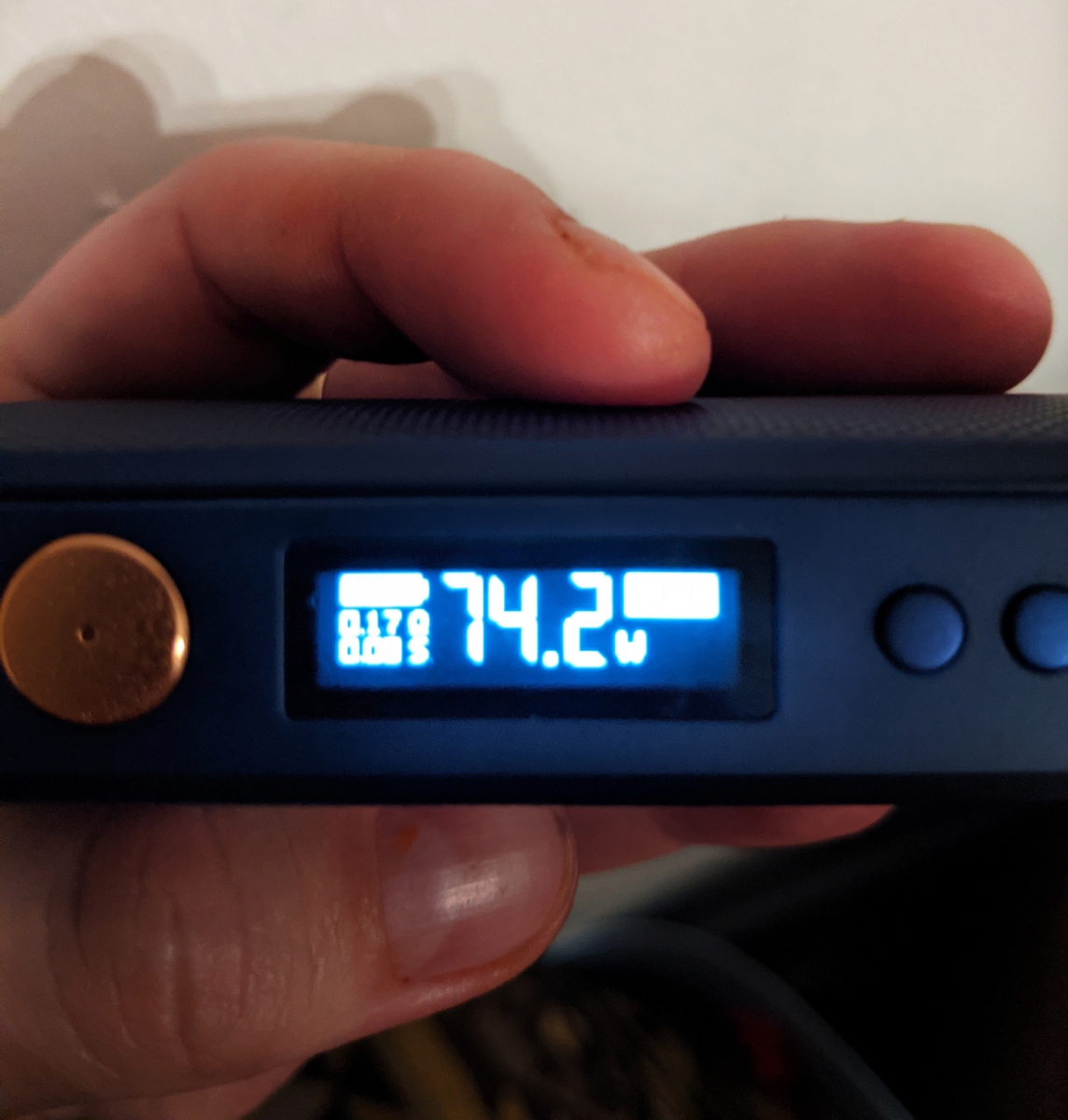 The first place to start with the Gen 220W is the feel of the device and, compared to its competitors on the market today, this has been very well thought out. The device is thin, comfortable and extremely light given that it is a dual battery, weighing a lot less than most other similar devices. The rubber style coating provides grip and the device just fits really well in the palm of your hand. Combined with this, despite heavy usage, there doesn't seem to be any scuffs, marks or wear and tear on the device. So the design of the device seems to compensate for general use, which is fantastic. The simplistic design goes really well in its favour and being able to fit most tanks on top without overhang despite not appearing to, shows just how much thught went into this device. The back magnetic door is sturdy without any movement whatsoever, and even the included battery ribbon is a nice feature. The fire button is nice and clicky with a soft touch, and the button placement means going into the menu is a desired request rather than an accidental one.

Under the hood, the chipset really does shine from its previous incarnation. The Axon chip performs as fantastically with the auto detection of coils and Eco mode over each battery lifespan. The menu design is both simple and effective, making switching between modes/features easy to do and, with the three click menu button option, no accidental menu entering whilst vaping. You can lock the power adjust with three clicks, and the five clicks on and off is very fast as well. The chipset brings much improved battery life from the Luxe, giving you over a days worth of heavy use from the mod with a decent set of 18650s. The simplistic design of the screen harks back to mods of old, and even the menu not timing out is a nice welcome addition when you are fine tuning your TC vape.

The cons for this device are more user based rather than design flaws, so make of them what you will. The first thing I didn’t like with the Gen 220W was the lack of fire button lock. If you ever find yourself clicking to turn off/on a device, then this mod may be a chore. As the chip is so responsive, if you accidentally over clicked five times, you can immediately turn the device off again. This is superficial I know, but I found myself regularly doing this when quickly trying to turn the device off before putting it away. The next con for me is the modes being incorrectly named. Again superficial, but I prefer power mode to be called that, rather than a new name that doesn't really change the performance of the vape from a standard perspective. The menu system may be a little long winded if you prefer a simpler unlock system, and the lack of fire button usage makes it a little different to other devices on the market. Other than that, there really isn't much else to critique the device on.

The Luxe was a device that provided fantastic options but had poor battery life to compensate it. The Gen 220W, however, has nothing of the sort anymore and Vaporesso have really delivered big time here. The device is solid, well designed, adaptable to different vape styles and is simplistic in its approach. There isn't a menu to be lost in or a million and one options to confuse your average vaper.  What you get is a fantastic performing device that offers substance over gimmicks and outperforms many others mods on the market today. Is this the best mod on the market? That comes down to personal tastes, but given a wide choice of new devices this year, I have to admit it is definitely up there, with the design making it a joy to take out with me.

Vaporesso have started a second generation of the box mod and it harks back to days gone by. Vaporesso could well be the company to evolve the mod into something so much better.

If you want to pick this up, drop in to Health cabin. 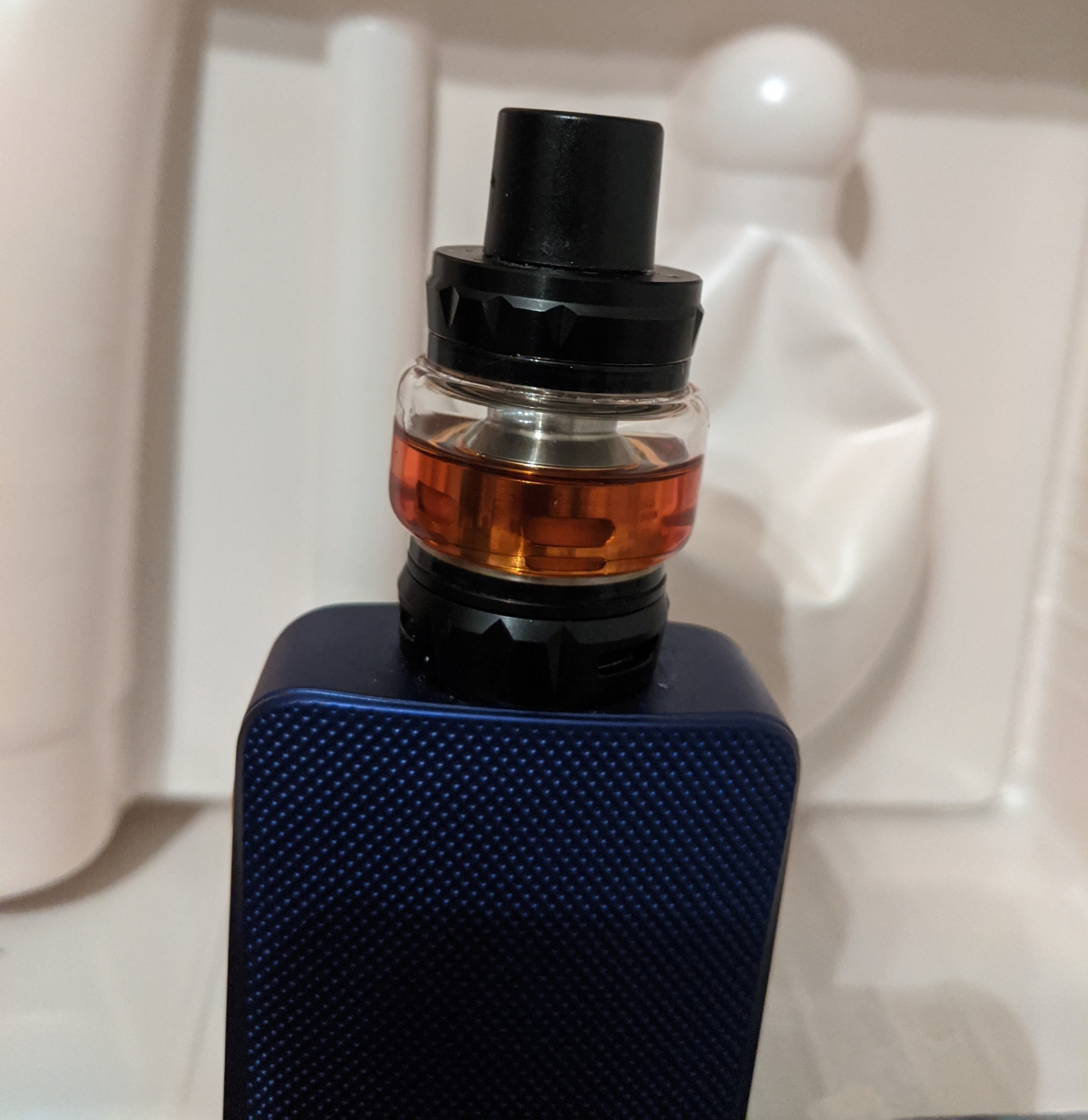