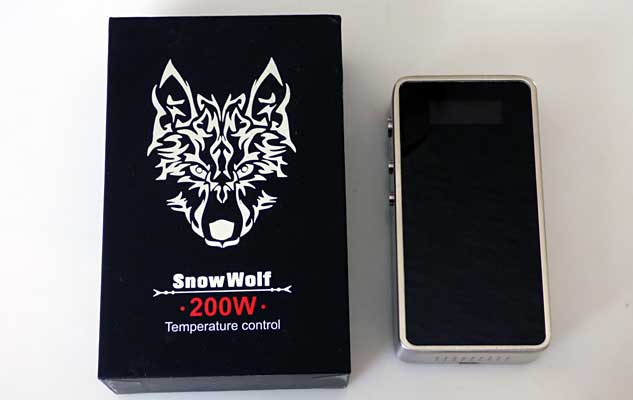 The Snow Wolf 200W box mod is an advanced device. Featuring a superb level of manufacturing the device includes temperature control and is fully capable of delivering up to 200 Watts of power. 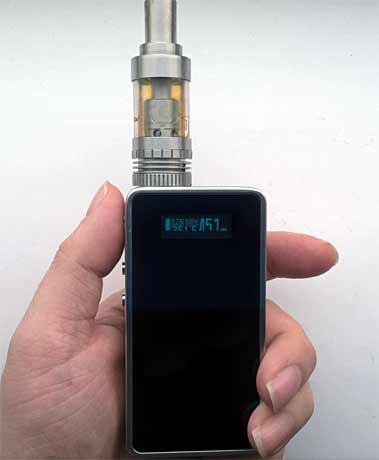 The Snow Wolf is an extremely nice looking mod. Featuring stainless steel construction it feels very durable but it is also quite heavy. The front and back panels are made of glass and there is a distinct resemblance to an iPhone screen. While the glass certainly makes for a very classy look I do question the design decision since it is far more prone to being damaged.

The buttons on this device are extremely nice, they are really solid and feel like they have been made to last. The 510 pin is spring loaded and all my atomizers sit flush on the mod.

The battery door is held on by very strong magnets and it is very easy to remove but not loose in any way. It is an almost seamless fit when the battery door is fitted. There are absolutely no problems with fitting or removing batteries and there is also a battery ribbon to make things more convenient.

The glass front and back while making for quite a pleasing look are major fingerprint magnets so be prepared to clean this mod a lot should you purchase it.

At the base of the mod there are twenty seven holes to allow for battery venting.

In terms of how the device feels in the hand I would say that while it fits well and feels nice to use, the weight with the batteries makes it a little uncomfortable over long periods of time.

While the front and back glass is tinted the actual LCD screen is extremely bright and the area that surrounds it is un-tinted. For those of you that own an iPV 4 and remember the problem with the tinted screen you will find no such issue with the Snow Wolf. I had no problems at all reading the display when using the mod outside in bright sunlight.

This is a lovely device but to be quite honest I wouldn’t want to take it out and about with me because I would be very worried about damaging it. For me this would be a mod to keep at home. 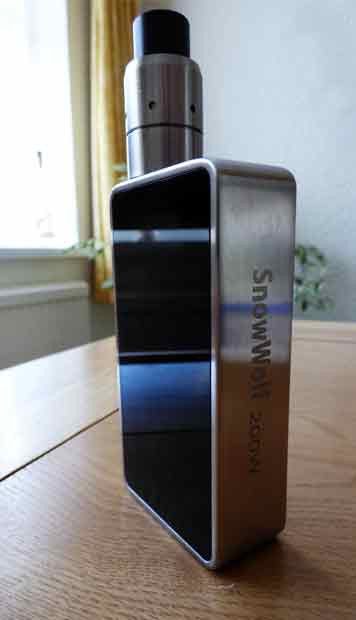 If you are looking for a very simple to use mod then the Snow Wolf is a good choice. It really is extremely straightforward but it does have a few unique quirks, namely the way it goes into standby mode after a short amount of time. When it goes into that mod it automatically locks itself so if you click the fire button it will just display the fact that it is locked. You then need to click five times again to unlock. While it is a very sensible safety feature to include I can see it really bothering some people who may just want to pick up their mod, hit the fire button and vape. However if you keep in mind that it is six fast clicks in total (one to wake up the device, five to unlock) then it isn’t a major issue.

What I really do like about the Snow Wolf is the way it easily swaps between temperature control and standard wattage mode. There are no complicated menus to navigate and if you are using a nickel coil the device automatically makes use of it and switches to temperature control.

Holding the plus and minus keys down together lets you swap between adjusting the temperature or the wattage. One weird quirk that will bother you if you are extremely OCD is the fact that due to this system you can never quite get the mod to be 100% accurate with your settings. For example say you want to set it to 280°C you hold both the plus and minus keys down then adjust with the plus or minus button, then you hold both keys down again to switch to wattage, but by doing that it always makes the setting jump one degree higher than you have selected. I got around it by setting the temperature to one degree below what I wanted but it really isn’t a huge issue and will likely only bother you if you expect 100% accuracy.

When you want to use the mod in wattage mode the temperature is still displayed until you hit the fire button then you will notice it disappears so you know you are using the device in the correct mode.

Turning the device off is somewhat strange, at least I thought so since you have to let the device go into standby mode first. According to the manual this is how it works:

When device is not in use, the screen will darken after 20 seconds. After 30 seconds the display will turn off and the device will enter standby mode. After 30 minutes in standby mode, device will automatically lock. Press the fire button 5 times in 3 seconds consecutively anytime during standby mode to turn off the device. “SYSTEM OFF” will then read on the display. Press any button to wake up the system.

Now while that makes sense it is a little long winded since it means you need to leave the device for 30 minutes to actually go into standby mode before you can completely switch it off. What is odd is that while I have switched off the device several times it periodically seems to flash the “Snow Wolf” logo at odd intervals. I first noticed this occurrence when I had left the device on my bookcase before heading to bed, I was just dozing off and I noticed this blue light so I looked over and it was the Snow Wolf displaying the manufacturer name “Lasimo” and then “Snow Wolf” before going dark again. I have no explanation for why the device does this because in my opinion switched off should mean completely switched off. Whatever the reasoning it doesn’t appear to drain the batteries so maybe I’m making a bigger deal of it than it actually is.

In terms of how well this device performs I have to say it is really excellent. Once you get used to the way the device locks itself it makes for trouble free vaping.

Initially I thought to myself “So this device goes to 200 Watts but I’m not going to be daft enough to try that.” Of course I reconsidered since I felt I had to test the device thoroughly. I build my Velocity RDA with dual twisted 26AWG coils, I forget what resistance it was but it was pretty low. I started at about 65W and gradually increased to 85W which made for a rather warm vape as I expected. I continued to ramp up the power to 150W and once you reach 151W the device switches from continuous to pulse firing.

It is purposely designed this way so it doesn’t put a massive strain on the batteries and to be quite honest when I reached 200W it was nowhere near as hot as I expected. In many ways I thought it was much cooler than 150W, while there was a massive amount of vapour produced it really didn’t do much for me but then I tend to prefer a maximum of 85W anyway so all this extra power was somewhat wasted on me.

Which brings me to an important point, just because a device can go to a ridiculously high wattage that doesn’t mean you should use it at that level. In fact continual use at 200W will drain your battery life before you know it. I think only a very special individual would ever want to vape all day at 200W and while there are some extreme vaper’s out there, I am not one of them but if you enjoy that kind of thing then feel free if it gives you a good vape.

Temperature control works and I used my Sense Herakles fitted with a Ni200 coil without issues. However there is one slight oddity in the fact that once the device goes into standby mode the first time you unlock it and fire again the wattage is much lower and it takes a short amount of time to ramp back up to normal. It is not a huge issue by any means, just something you need to be aware of.

I do find that battery life seems a little shorter in the Snow Wolf than any of my other high power mods, possibly by about 5%. I am pretty certain I am not imagining it and I have only been using the mod at typical wattages but it seems to drain the batteries slightly quicker than my iPV 4S and my Sigelei 100W+. However you should get at least a full day out of it if you were continually using it at a reasonable wattage. 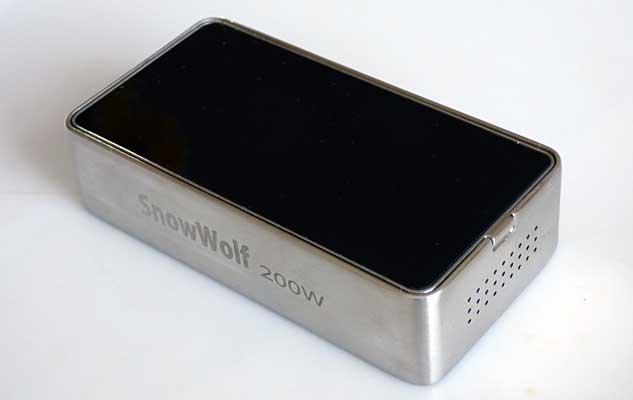 The Snow Wolf is a really excellent mod that is capable of 200W of power should you ever desire it but the power alone is not this devices only selling point. The convenient switching between wattage and temperature control makes it very simple to use and I would say that the Snow Wolf is probably one of the most accessible high powered mods available on the market.

It is by no means a cheap mod ranging between £80-100 but what you get for your money is a very well made device. In many ways it feels far more durable than a Sigelei mod and those devices are very well put together and last a long time. Apparently the Snow Wolf is rumoured to have been made in a Sigelei factory and considering the build quality I can believe it.

The only real negatives to the Snow Wolf are the glass front and back, so you must be careful with it and also the fact that it drains you batteries just a little faster than other mods.

The mod also has a couple of weird quirks but it is nothing that affects overall performance mainly its locking habits and the fact that you can’t be 100% accurate with your settings.

If it appeals to you then I would have to say that the Snow Wolf is a highly desirable mod and while the price is higher than most you certainly get your money’s worth. 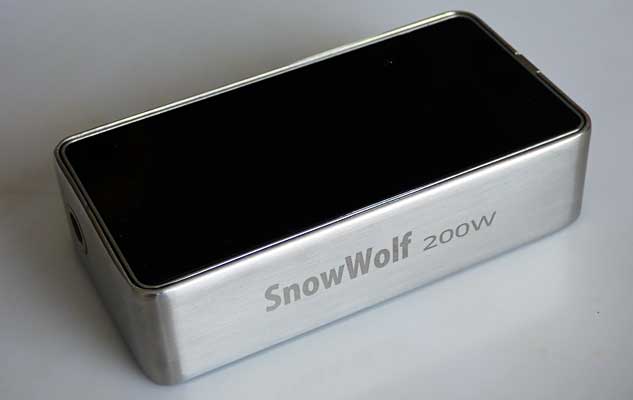