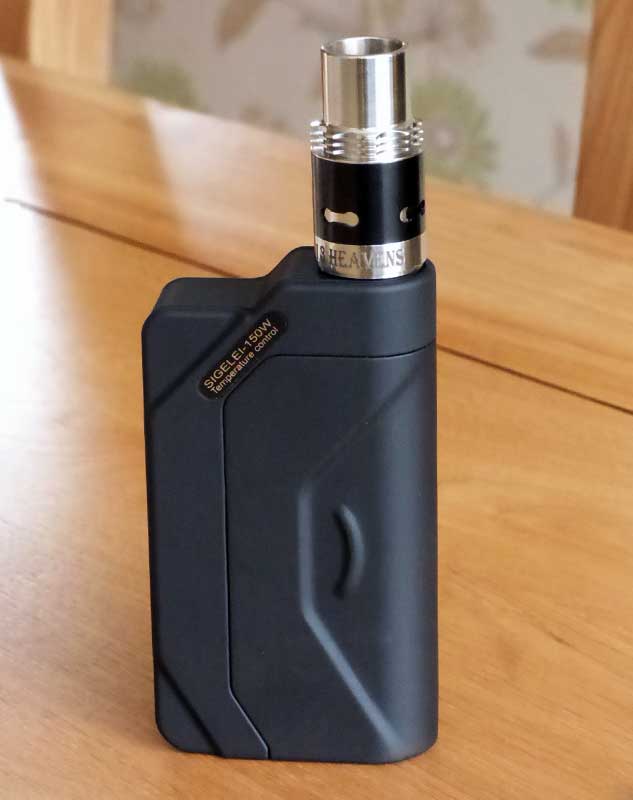 Introducing the 150W Temperature Control, which is the latest device from Sigelei. Featuring 150W of power with optional temperature control included. This mod deviates from existing Sigelei designs with a much better form factor as well as an upgraded chip and excellent build quality.

For some people who may have recently purchased the Sigelei 150W this may seem a little soon for Sigelei to be releasing yet another mod and I can understand any frustration that this might cause. We all know how fast this industry moves with new and more powerful devices appearing every other day nevertheless the Sigelei 150W TC has now been released so let’s take a look at it.

The 150W TC is something of a radical departure from Sigelei’s existing mods and for those people who love the boxy style of the 100W+ and the 150W this device will take some getting used to. I know some people have complained about the aesthetics but I don’t agree.

Personally I loved the design from the first time I ever saw it. It has a very futuristic look to it and this makes the device quite unique. There are numerous differences to the previous Sigelei mods. Firstly the device is no longer completely rectangular and now has a stepped look to the top of it. It is also smaller than the 100W+ in height, width and depth.

All the edges are far more rounded and it feels much better in the hand. This design is certainly more ergonomic than the previous models that often felt a bit “brick” like.

It still has the same solid construction you would expect a Sigelei mod to have but everything is coated in what feels like a heavy rubber finish and while that might sound strange it works really well because it helps you to maintain a good grip on the device. In many respects I suspect this is the kind of mod Batman would have strapped to his utility belt assuming the Dark Knight ever has time to vape in between catching criminals.

Perhaps I have been exposed to one too many Science Fiction movies but if you look at the device from the side it almost looks like the ammunition clip from some futuristic assault rifle.

The 510 pin is made from copper and spring loaded. Please note that atomizers do not sit 100% flush with the top of the mod but before you get too worried the gap is extremely minimal about 1-2mm at most and you have to hold the mod at a certain angle to the light to even notice it.

The buttons feel extremely nice having a good click to them and they are much better than the ones of my 100W+.

The LCD screen is exactly the same as the one on the 150W and the 100W+ in terms of brightness and size with the only difference being that it now displays temperature and joules when set to that mode. It displays all the typical information: resistance, wattage, battery charge indicator, battery charge percentage and voltage. When using it in temperature control mode wattage is replaced with joules and the battery charge percentage is replaced with the current temperature. While the display is not as large as the one on the iPV 4S it is bright and quite readable. The screen also has a plastic screen protector which will eventually peel off but in the meantime it helps to protect against scratches.

The battery compartment is also noticeably different from the previous Sigelei devices because instead of a lid that press fits it is now a slide out to the side affair. The magnets are very strong which is typical of Sigelei products. Please note that batteries are a much tighter fit in this device. You can still get them in there but it does require a little more effort than the 100W+ or the 150W. To assist you with the removal of the batteries there is a battery ribbon included.

Fitting the battery door itself is not as straightforward as you might be used to but it is not what I would call difficult, you have to angle the two tabs on the door slightly before sliding it in, once you have it aligned correctly it will click into place. I don’t think it is really an issue but it does take a little getting used to.

The battery door has not wobbled or shifted at all in the time I have spent using this device and it feels very solid. 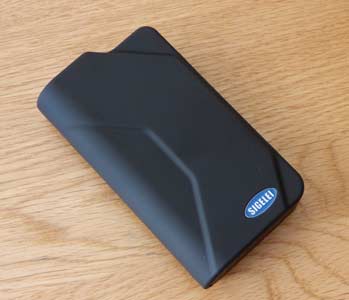 At the base of the device there are nineteen holes for battery venting.

This mod does not include a USB port and given that a great many mods now allow users to update the firmware on their devices this could be a deal breaker for some since you are pretty much stuck with the factory firmware. Having said that it does seem to work without issues and it really only should bother someone who expects Sigelei to enable titanium coil support which this mod does not feature.

Built quality is excellent as you’d expect from Sigelei. It feels extremely durable and even though I had my doubts about the longevity of the rubber coating it has shown absolutely no issues so far and I believe it will last..

The device comes with a silicone sleeve for added protection and while it is a nice extra I do question why it isn’t black to match the mod. I am highly OCD about sleeves matching mods but some people probably wouldn’t care less. No doubt there will be other sleeve colour options available before long. I personally find the mod to be durable enough that the sleeve seems surplus to requirements anyway.

One thing I did notice in a few cursory YouTube reviews that I watched regarding this mod was some criticism regarding the position of the fire button. I have to say that the button is perfectly located for me and at the exact place I would want it. Pressing it with my thumb is extremely convenient and not at all uncomfortable so I have no idea why some people have made an issue out of it.

I will say that having used my iPV 4S extensively of late it feels strange getting used to the plus and minus buttons being located in the middle again but that is due to recent habits and not a fault of any kind since my 100W+ has the buttons in the same place.

The 150W TC works pretty much identically to an iPV 4/iPV 4S.

The menu allows you to easily swap between Power/Wattage mode and Temperature Control mode. Unlike the iPV 4S you can only select Ni200 (nickel) and titanium is not supported with this mod.

This device has excellent performance much like the standard 150W but with the added bonus of being able to use temperature control. One noticeable thing is that when the display dims to conserve power if you hit the fire button it does take about a second at most to fire again but once it is awake it consistently fires every time. I don’t think that is exclusive to this mod and I am pretty sure my Sigelei 100W+ also does it. Perhaps it is some strange quirk of Sigelei mods but I don’t find it a con at all and since it doesn’t impede performance I consider it a non-issue. According to my good friend MrTeaTime from the POTV forum the standard Sigelei 150W also does this.

I have used this device with quite a few of my atomizers including the Freakshow Mini RDA, the Thirteen Heavens 9 Hells RDA both using Kanthal builds, as well as the Freemax Starre and the Sense Herakles using Ni200 coils. All of them have performed as I would expect them to without any issues whatsoever.

Temperature control works perfectly and the resistance of a new coil can be locked by holding down the plus and minus buttons just like with the iPV’s.

Battery life is typically what you would expect from a dual 18650 box mod. When running in wattage mode you can expect between one to two days of regular use or even longer if you are a casual vaper. Enabling temperature control mode causes a much faster drain but you can still expect a full day of heavy vaping if you restrict yourself to about 40 Joules.

One thing that is important to note is that when you switch on your device after inserting fully charged batteries the display will initially show them not being at full charge. This resolves itself upon pressing the fire button for the first time. I have no idea why it does it but I don't see it as a problem. 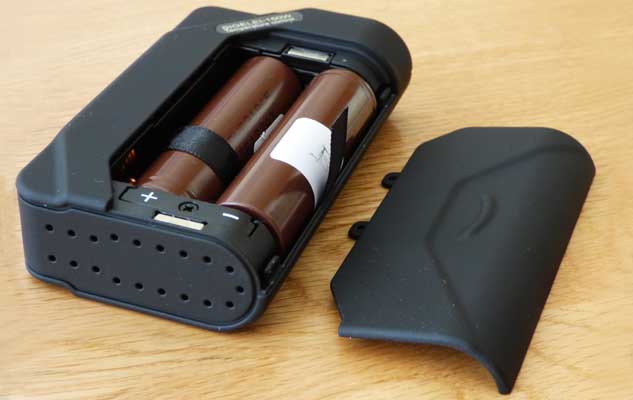 Sigelei have done it again and made an outstanding mod to their usual high standards of excellence. The 150W TC is an excellent device featuring superb build quality and performance. The aesthetic redesign might not please die hard Sigelei fans but I feel the futuristic new look benefits the user due to it feeling far more comfortable to hold and in my opinion it looks far more awesome than my 100W+.

The only negatives I can really find is that it does not have titanium coil support so if you are someone who prefers to work with titanium then this mod will not be for you. The other issue is the lack of a USB port for upgrades and that will bother some but if it helps to reassure you I have found no issues with the factory default firmware. Titanium support and firmware updates aside this device is an excellent purchase and definitely worth the money.

Many thanks to Grey Haze who kindly sent this item to Planet of the Vapes for us to review. 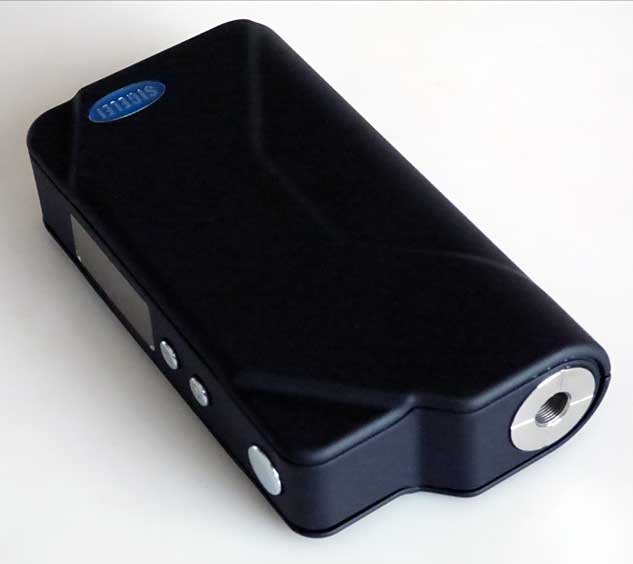