The SPD A5 is the latest device from Chinese manufacturer Ehpro. It is capable of a maximum output of 50W and features temperature control. It is designed to be a highly compact and lightweight mod at a very reasonable price. 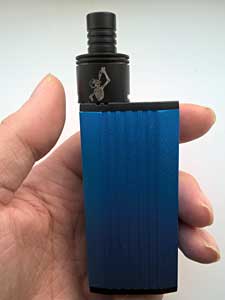 The first thing you notice about this mod is how very compact and light it is. Being made of aluminium and polycarbonate it seems at first glance like it might be less durable than other mods but in all honesty it feels really good and everything is quite solid in terms of how it is put together.

The only exception is the battery compartment lid which does feel a bit thin to me and I think if you weren't careful you might eventually break it. However in terms of the actual time I have spent using the mod I have had no issues. Rather than being a lid that is held on with magnets the one on this device is a slide in and press fit affair. A 18650 battery does have to be inserted with the positive contact facing down but it is a good fit with no obvious problems.

All the buttons on the device have a good click to them and I haven't noticed any rattling at all. The OLED screen is a good size, very bright and all the typical information is presented clearly displaying wattage, battery charge, resistance, voltage and temperature when that mode is enabled. Unfortunately the surface of the screen seems to scratch a little too easily but considering the overall price of this device Ehpro must have had to keep costs down somewhere.

The review version of this device was the blue and black version and I don't see the colour flaking off any time soon. The finish is nicely done and aesthetically it is a decent enough look.

The 510 pin is spring loaded and I found it does take a little bit more pressure when is typical when you are screwing tanks and drippers on, so ideally the threading could be a little better. Overall what appeals to me about the SPD A5 is the fact that it is highly compact and that it feels very comfortable in the hand. 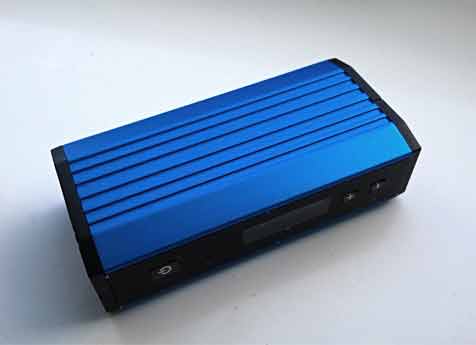 This is a really simple device to use and I don't think anyone will run into problems. The included user manual is well written and all of the devices features are explained well. As is typical with the majority of these devices it is a standard five clicks to switch on. At this point a further five clicks will lock the device very much like a RDNA40, however unlike other mods that simply lock and go into standby after a set period of time this one does actually switch itself off.

Temperature control actually works on this device but like a lot of others currently on the market it doesn't automatically switch temperature control on. It does greet you with the typical “New coil on, same down” message when screwing on a new atomizer and to translate that for you it simply means for a new device you should press the plus button and for the same device you should press the minus button. This is all so the device can be accurate and ensure the correct coil reading.

While it is something of a pain that the device doesn't automatically switch for you between temperature control for nickel builds and standard mode for Kanthal builds it is not especially hard to do it yourself but of course you have to actually remember to do it.

For those wanting to switch off the display the device does feature stealth mode which is clearly covered in the manual.

Do take note that while the battery can be charged through the use of the micro USB cable this device does not support pass through so you will not be able to vape on it while charging. Personally considering that you can simply remove the 18650 battery and put a fully charged one back in there I don't see it as being a problem.

I firstly tested this device with my Freakshow Mini RDA, the coil being 26AWG (0.4mm) Kanthal with a resistance of 1.0 ohm. The coil was wicked with Japanese Cotton and I used BLAQ Vapor Origins as my juice of choice. The Freakshow Mini screwed in without issue and was totally flush on the device. The device performed exactly as you would expect it to with absolutely no problems at all and it gave a really good vape. 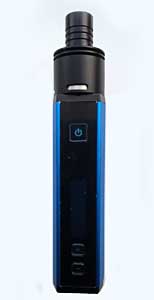 I then went on to test temperature control and used my Sense Herakles Sub Ohm Tank with one of the new Ni200 coils that arrived in the post today. I had already filled the tank with South Coast Vape's Nipple Juice which is a particular favourite of mine. Upon screwing on the tank which sat completely flush with the device I got the typical “New coil” message, so I clicked the plus button but like I have already mentioned it did not automatically swap into temperature mode. I then had to hold both the plus and minus buttons and enable it myself.

Overall I cannot fault this device for it's performance, my only real gripe is the fact that it doesn't switch modes for you.

Considering everything this device does and the fact that it is so light and compact I think Ehpro have done a really good job. For something that is capable of 50 Watts with included temperature control and that it features replaceable batteries the asking price of between £35-40 seems quite reasonable to me.

Of course it does have some minor issues such as the way the screen is highly prone to scratching and the lack of a auto switch option between standard and temperature mode. The battery compartment lid is a little lightweight and I think the 510 threading could be improved but on the whole it is a decent device.

In terms of choice there are a lot of options out there and you could spend a little bit more if you wanted a device with higher wattage but if you do choose this one I think you will be happy enough.

You can win one of these mods in our competition here, which will run until the 12th August.