Uwell has had quite the history over the past several years as one of the mainstays in the industry, and their product lineup is quite impressive. Starting with the original Crown which took the quality of sub ohm vaping to a whole new level, they have followed it up with a varying range of products. The Crown 3 served to be a return to form, the Nunchaku was a firm vapers favourite, and the Amulet took the realms of vaping possibilities to a whole new level. So the Crown 4, the flagship kit from Uwell, has to be up there, right? Uwell are riding on such a positive wave so surely they have hit gold again. The question is, however, is it a must buy product?

The Crown 4 is the first kit release from Uwell which makes it just that little bit special. The kit contains a dual battery mod, a sub ohm tank that tries to push the boundaries of what is expected, and a royalty inspired design. This one is an exciting kit indeed, but does the Crown reclaim the throne or has it been forced to abdicate?

About the Crown 4 Kit

The Crown 4 is quite the stand out tank, offering to deliver sub ohm vaping in a way that is extremely interesting. The tank comes with a 6ml bubble glass capacity (or 2ml TPD) and 5ml straight glass out of the box. It is compatible with two types of coils which I will get into in just a moment. The tank has a replaceable 810 drip tip and top screw design, with a quarter turn removing the top cap revealing a kidney shaped fill hole underneath. The tank comes with bottom adjustable airflow, 25mm threading and a push in coil design which creates a seal to prevent leaking.

The tank comes with a self-cleaning technology designed to eliminate condensation from the tank to produce a more efficient vape.

The available coils are worthy of a mention by themselves. There are three in total at the time of writing, the SS904 0.2Ω/0.4Ω, and UN2 meshed 0.24Ω coil, but it is the SS coils that really stand out. They use the same metal as seen in high end watches such as Rolexes to offer a top quality coiling material inside. The tank comes with both SS coils included, and the recently released kit comes with the mesh coil in the box. Otherwise the mesh will have to be bought separately, as I have done.

The Crown 4 mod is Uwells first real dual 18650 battery device, and it aims to compete with the very best devices on the market. It is a 200W device with front panel battery door and battery ribbon inside. It has a 510 pin placed on the right of the mod with the device moulded to fit the pin to prevent overhang on 25mm tanks. The body has a rounded edged design with anti-slip and anti-wear silicone on the bottom to prevent sliding on smooth surfaces. The front and back are emblazoned with the crown design in different colours depending. The side contains a rounded fire button with the Crown logo etched onto it, along with the screen and two navigation buttons. Finally there is a USB port at the bottom. The screen displays both battery indicators and percentage, wattage, mode, vape time and volts. 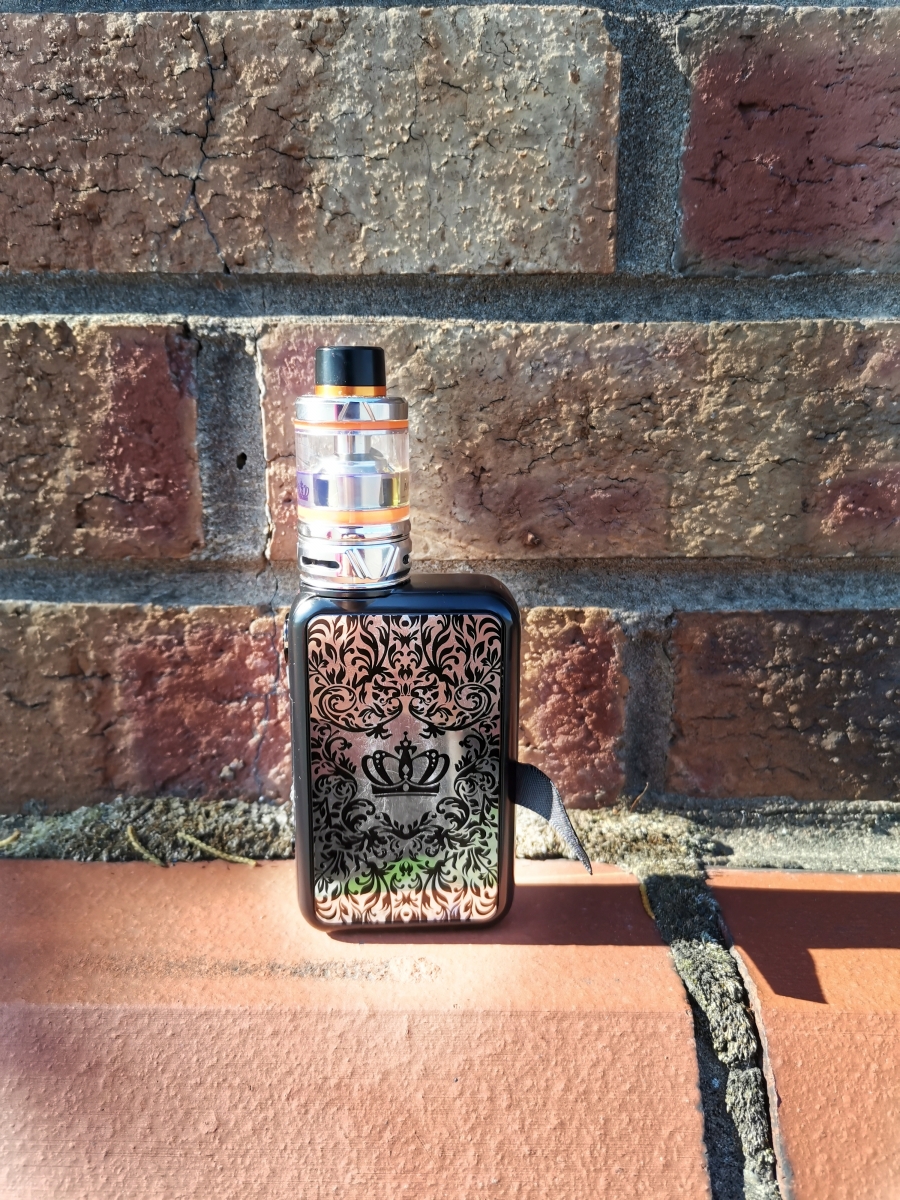 I remember the original Crown tank back in 2015 and was impressed by just how well made the tank actually was. It seems Uwell have not forgotten this, and I can say the Crown 4 is fantastically built. It feels solid, has survived a few tips (more on that later), and the coil performance is solid as well. The shining triumph of the tank however is the self-cleaning aspect, which is horribly undersold. What this feature does is utilise far more eliquid than most other tanks on the market today with no waste. Every drop seems to be pulled into the coil to the point that it can be completely empty at the point of refilling. The top cap is easy to twist off with only a half turn, and large filling holes underneath make it easy to fill up. The air flow is wide and quiet, and the tank profile is small enough to fit snugly on any mod, not just the Crown 4. The push fit coil makes it much easier to replace than ever before and at half full, the tank won’t leak any eliquid when changing.

In regards to the coil performance, they perform really well and I can get at least two weeks of use out of them even with sweeter liquids. The SS coil is a little less impressive than the mesh but at a guess, the SS is being underpowered in wattage mode. The mesh coil has strong flavour, great vapour production and overall is really enjoyable for most people to use.

On to the mod now, and what Uwell seem to have done is taken the box mod "copy and paste" design and added their own flare to the product. The Crown boasts a shiny design rather than resin like many others, and it is stunning. The colours pop, although the silver that I got is slightly less glitzy than the rest. The mod feels comfortable in the hand, and the buttons are nice and clicky/responsive without any misfires or accidental button presses. In terms of the chip inside, it works really well as you would expect, with decent battery life. I got around a day or so with heavy usage, and a simplified menu system allows you to select between modes much easier than other similar mods. The battery side is secure without any movement unless forced, and it fits snugly enough that you forget which side to open again when you need to charge batteries. The 510 plate on top fits a 25mm atomiser into the design nicely. The rounded edges make it comfortable without any corners to dig into your hands.

In terms of the tank, most people will really enjoy this tank because it really does perform. I guess in my experience, the cons are more geared towards my own personal preferences. The first con for me is that the SS coil is woefully old fashioned for a sub ohm tank in a market that has seen temperature control fall out of favour. In power mode, the coil can heat the tank up quite a bit with chain vaping, making it less viable as a sub ohm tank outside of its specific mode. There is a slight flavour drop off as well compared to the mesh option. The locking mechanism for the tank top is a little stiff when you first get the it, requiring a little force to secure it back up again. It does ease off after a while, but the stiffness makes it difficult to change the glass on the tank as well. For me as well, I find the coil a little too smooth with 3mg eliquids, almost giving me the impression that they are nic free. This is not unique to the crown, most push in coil designs are like this, but you really need to vape 6mg to get that throat hit.

The cons for the kit do seem more weighted towards the mod and this feels harsh given the quality of the tank, but it is what it is. The first con with the mod is the weight. It does feel a lot heavier than other box mods on the market. I am not exactly sure what makes it so heavy as the tank certainly doesn’t contribute to the weight. The next issue I have with the design of the mod is the 510 plate situated on the right hand side. Personally I prefer a centralised plate for aesthetics, but the placement does cause a slight issue. With the mod having rounded edges, the device is far more unstable than other box mods out there and this is where the tank placement is the issue in terms of safety. With it being so close to the side, it creates a bigger chance of breaking the glass, certainly with the bubble glass provided. The profile of the mod locks the size of the tank in place meaning bigger atomisers will suffer quite a bit of overhang which will be more noticeable due to the moulded 510 plate.

The modes are a little bit limited on the mod as well which may disappoint some people. You only really get the wattage (power) mode and two temperature control, one for SS. Given most mods on the market provide options such as memory or bypass nowadays, it really shows the limitations of the chipset that Uwell have used here. It is a solid chip but is limited in its possibilities.

Given the flow of the cons, it would be easy to think that the Crown 4 kit is very unbalanced. To be honest, if you are looking for a solid performing and high quality set up then the Crown 4 kit may well be a great addition. The mod does not shine as much as the tank, but it doesn’t need to. It is just a reliable device to power your tank with. You may not rush out to buy the mod by itself, but combined with the crown tank on top, it performs well. As for the tank, Uwell are still proving why they are one of the kings of the sub ohm market. It gives great flavour, vapour production, it's easy to use, has great build quality and best of all, it is very efficient in terms of your eliquid. You won’t get dry hits unless you try to get them, and the colour match with the mod just adds that little extra touch.

Uwell are still worthy contenders to the throne and the Crown 4 proves to be another powerful name that is worthy of the Crown that it wears proudly.

This kit was provided by Sourcemore, so big thank you to them!

If you want to pick up the Crown 4 then you can do so here.

You can apply the POTV exclusive discount to get this kit for only $46.79 using "CR4E" 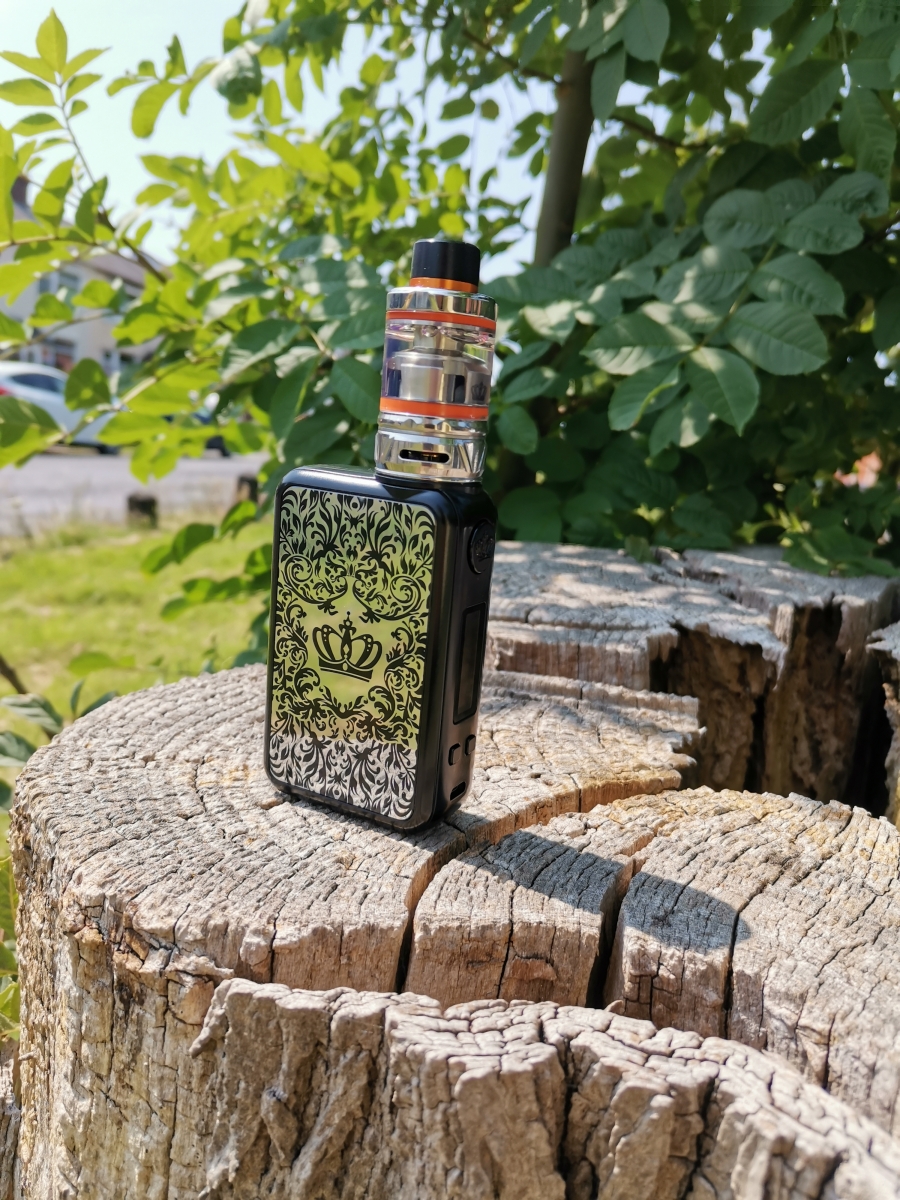