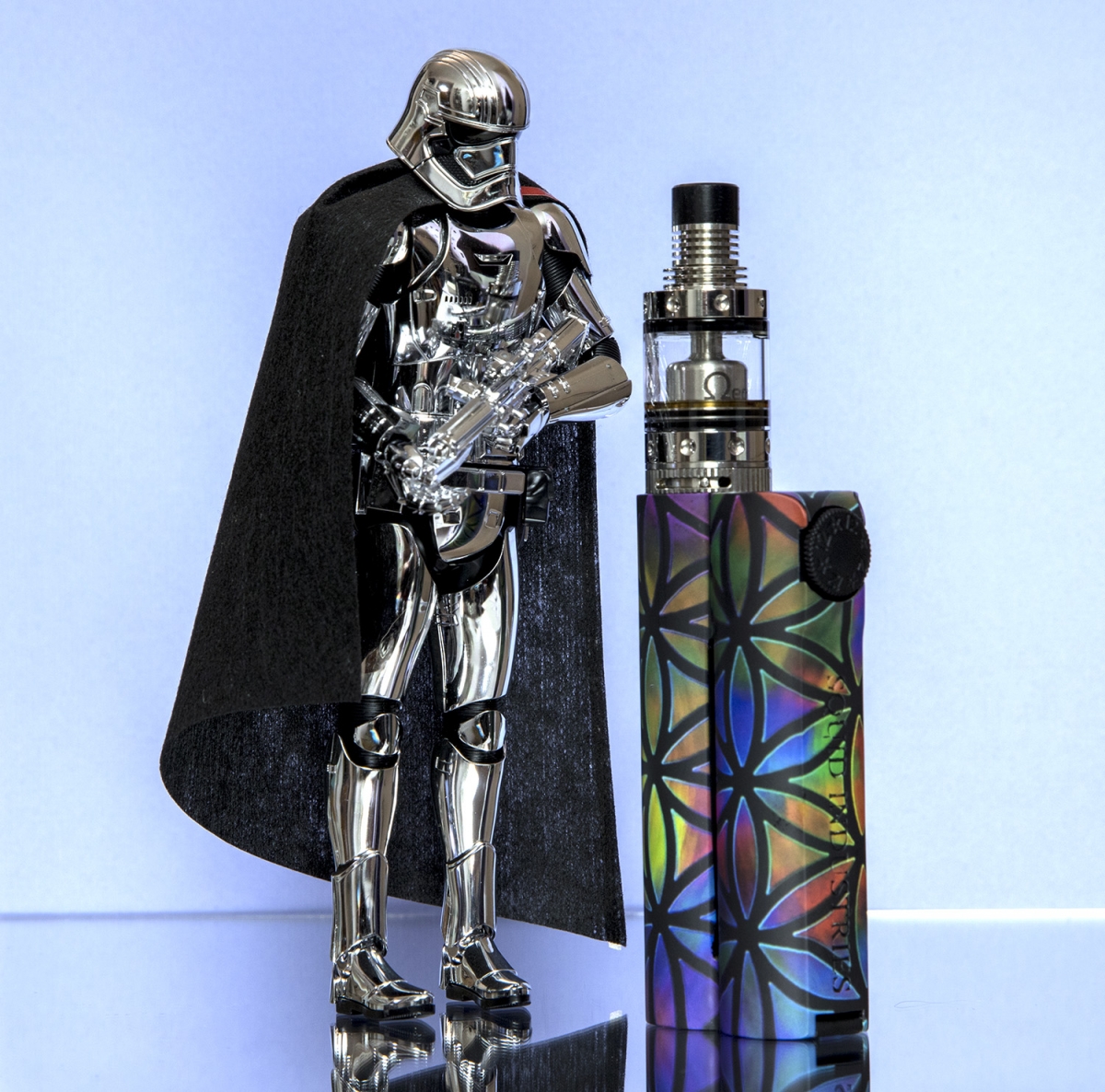 Basic features, no menus, little innovation-sounds like a con but this is a superb mod and perfect for wattage only users. No faffing about with complex menus and it feels superb in the hand–I LOVE this mod.

As this is a stand alone mod only, there’s nothing exciting when unboxing this but it does have a high end look to the packaging. You have the mod in a protective bag, the basic user manual, warranty card, QC card and two ‘mod protectors’ which are just two discs to prevent atty rash. There is an interesting story about the designer on the back of the box. 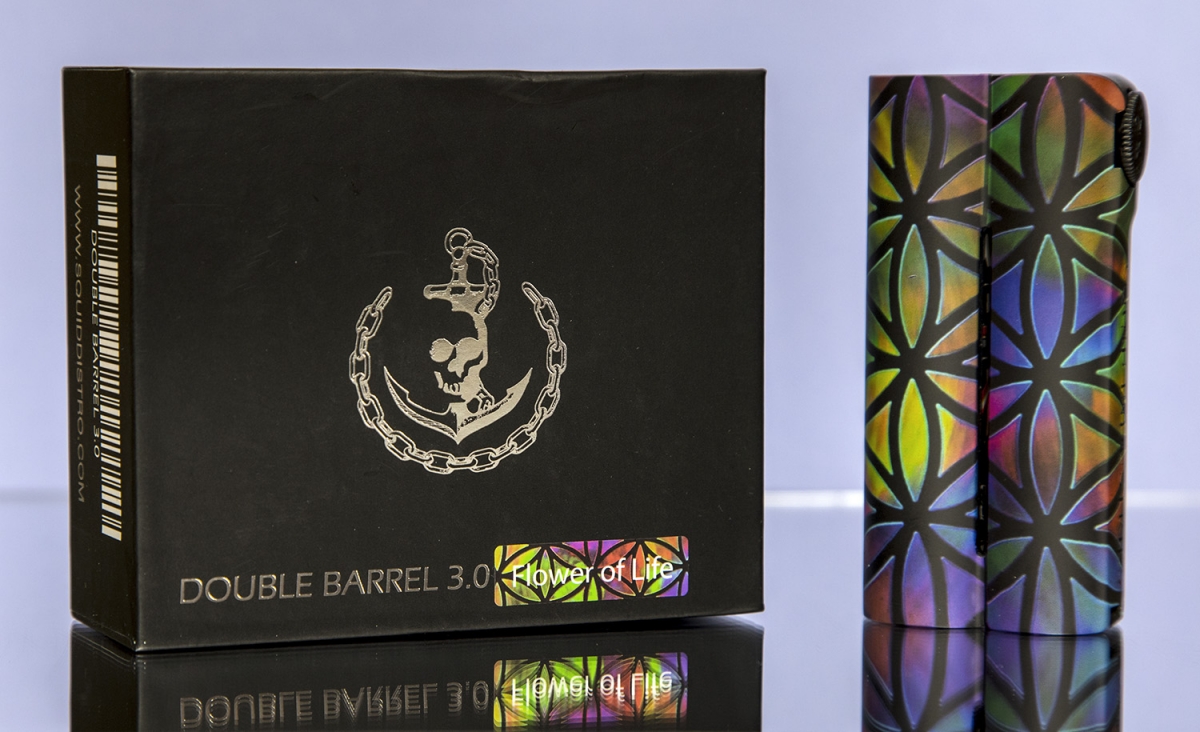 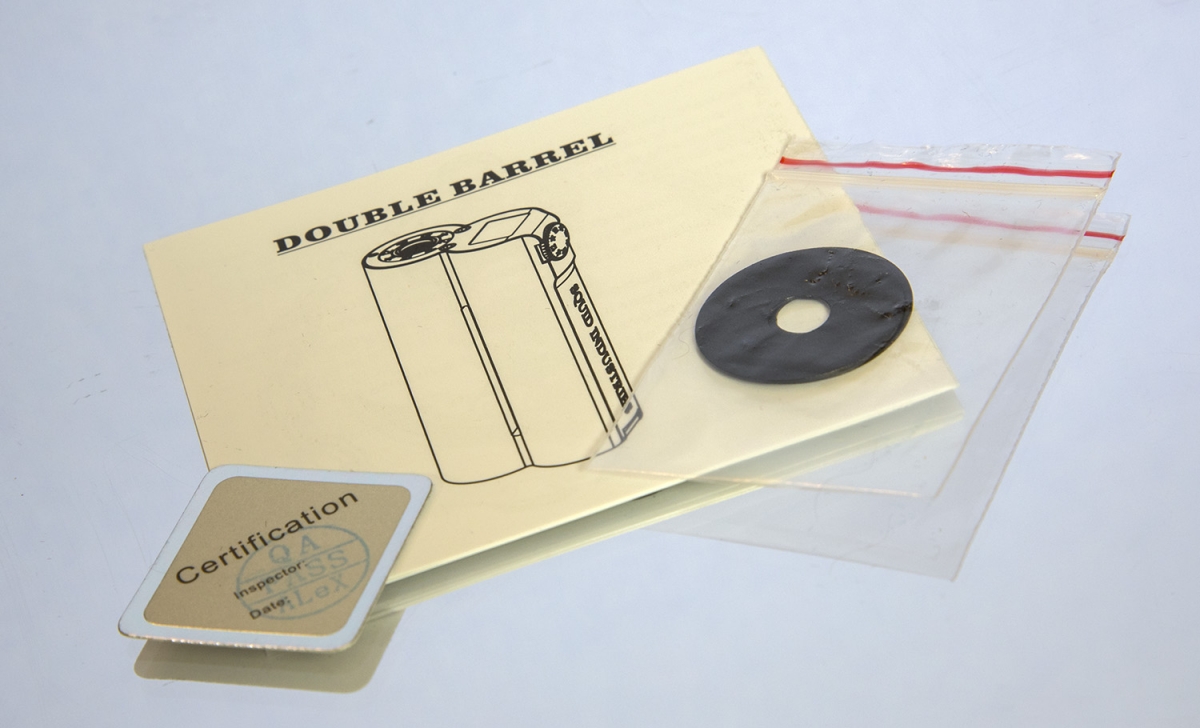 The mod itself already felt great even without batteries. I threw in a couple of 18650s and the weight is really nice, it’s heavy for sure but in a good way.

Some of its features: 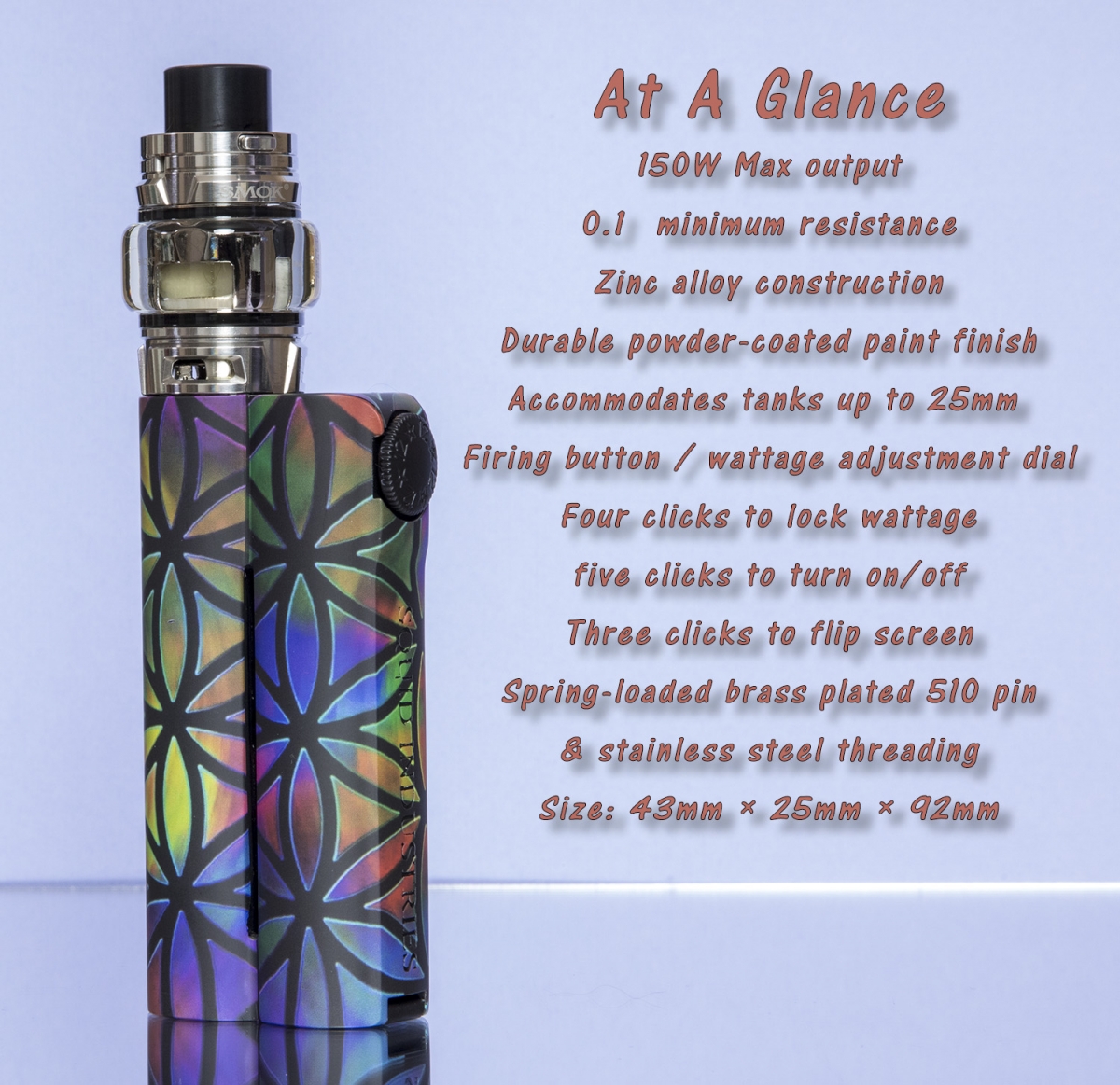 Before I get stuck in, it is worth quoting Squid’s own bumph as there are some interesting points (taken from the official website):

"Squid Industries' flagship mod perfected!!! Introducing the Double Barrel V3! This latest version of the Doubled Barrel maintains the sleek, sexy lines you've come to know and love from the Double Barrel. So how did we come about making changes to such an awesome mod? We listened to our customers and upgraded every potential shortcoming presented in previous versions! We increased the diameter to 25mm so that the new Double Barrel will accommodate your favorite attys. We upgraded the 510, flush mounted the screen, and sealed the entire top portion of the mod, so whether you experience a leaky tank, or over-drip, you won't have to worry about shorting out your mod with juice. We upgraded the contacts making them more flexible and more durable in case your mod takes an unexpected impact. We added a hinged door, no more losing battery doors! And last but not least, we upgraded our paint to powder-coat. Not only is this paint job more pleasing to the eye, it’s also much more durable!"

This pretty much sums up the difference between the V2 to the V3 and shows they listened to customers/reviewers.

Though it looks pretty much the same, the main upgrades are the sealing, flush screen and battery door, all of which were the only major cons of the V2. The design, form factor, weight and electronics are the same as the V2.

The original battery door was especially annoying as it was separate so you had to unclip it off the mod, pop your batteries in and then faff around clipping it back on. Thankfully that’s been solved, it feels floppy on its hinge but it’s solid once closed. 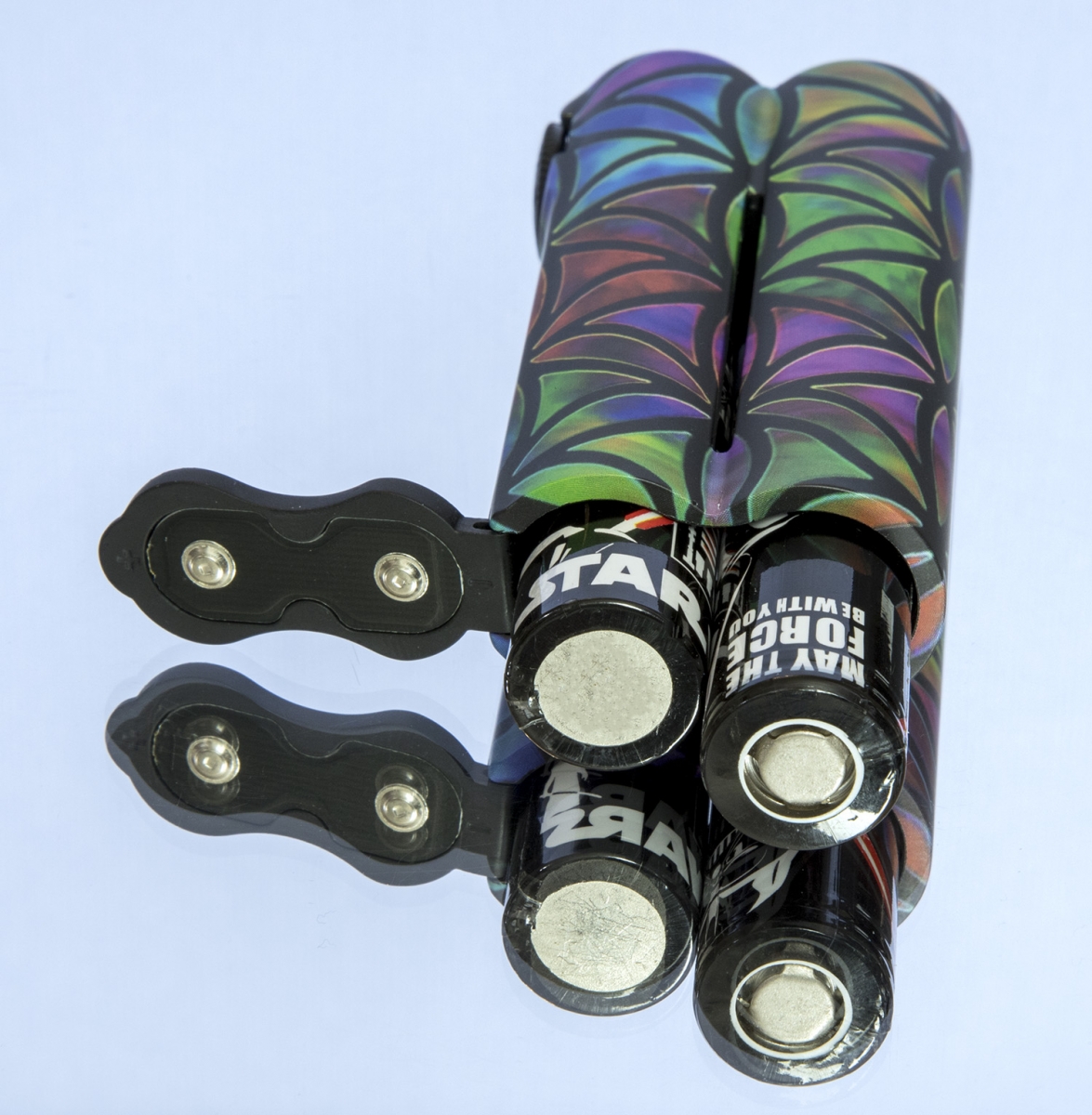 The other main difference in this edition is the Hydro Dip coating. I have to admit I cringed when I saw the ‘Flower Of Life’ version I received but it is actually quite nice as it has a desaturated matt finish which also feels good. I would have chosen the Samurai version but I'm quite happy with this version, there are four styles that should suit most tastes. 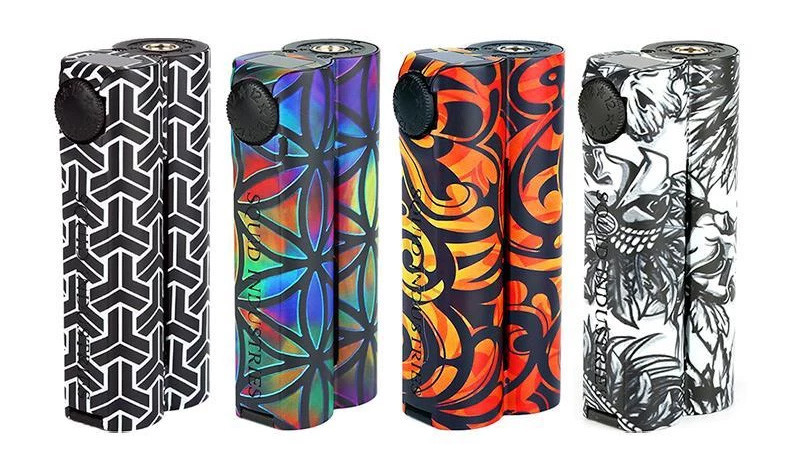 Using the mod couldn’t be simpler, it’s wattage only with no menu. There is an OLED display screen showing basic information:

Although the screen is small, it’s still easy to read and you can flip it depending on the orientation you choose to hold it in. 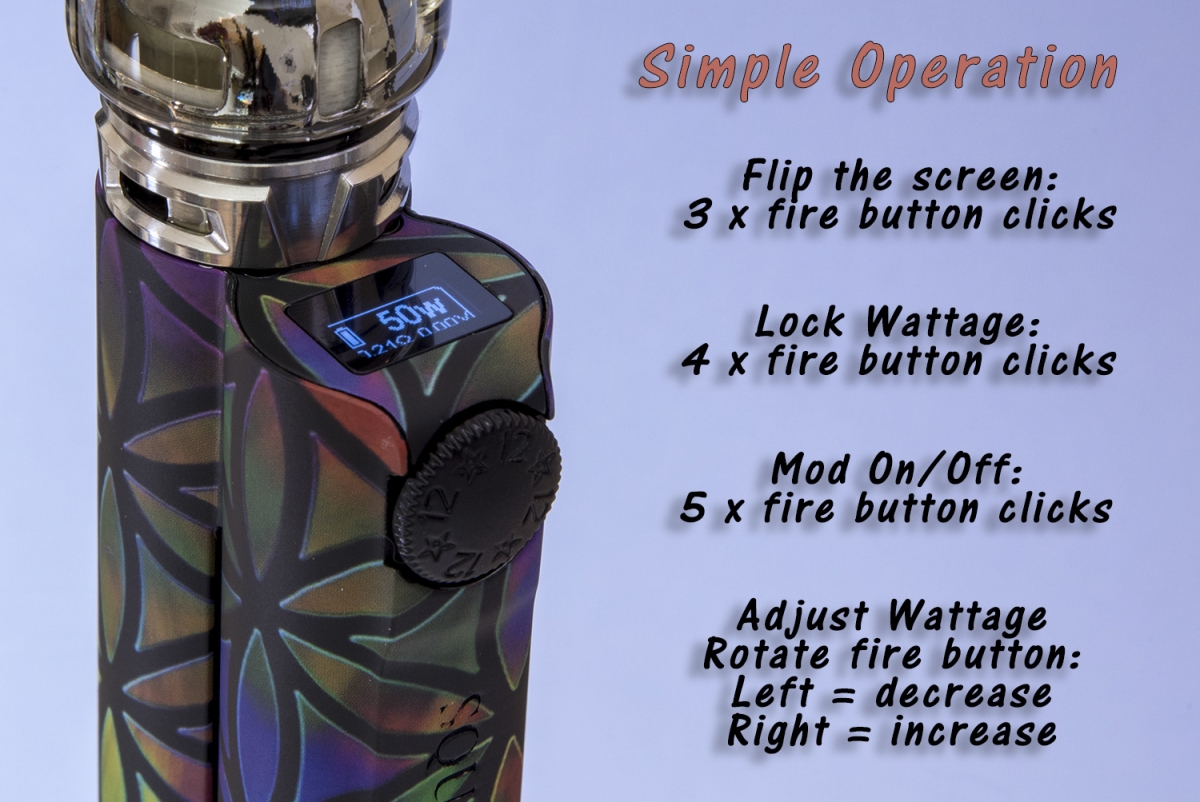 The fire button/dial is one of the things I love about this mod, it’s solid with a decent resistance so making it fairly safe from pocket firing and accidently changing your wattage. The only downside is that it can take a while dialling up the wattage from low to high. It also doesn’t round robin. 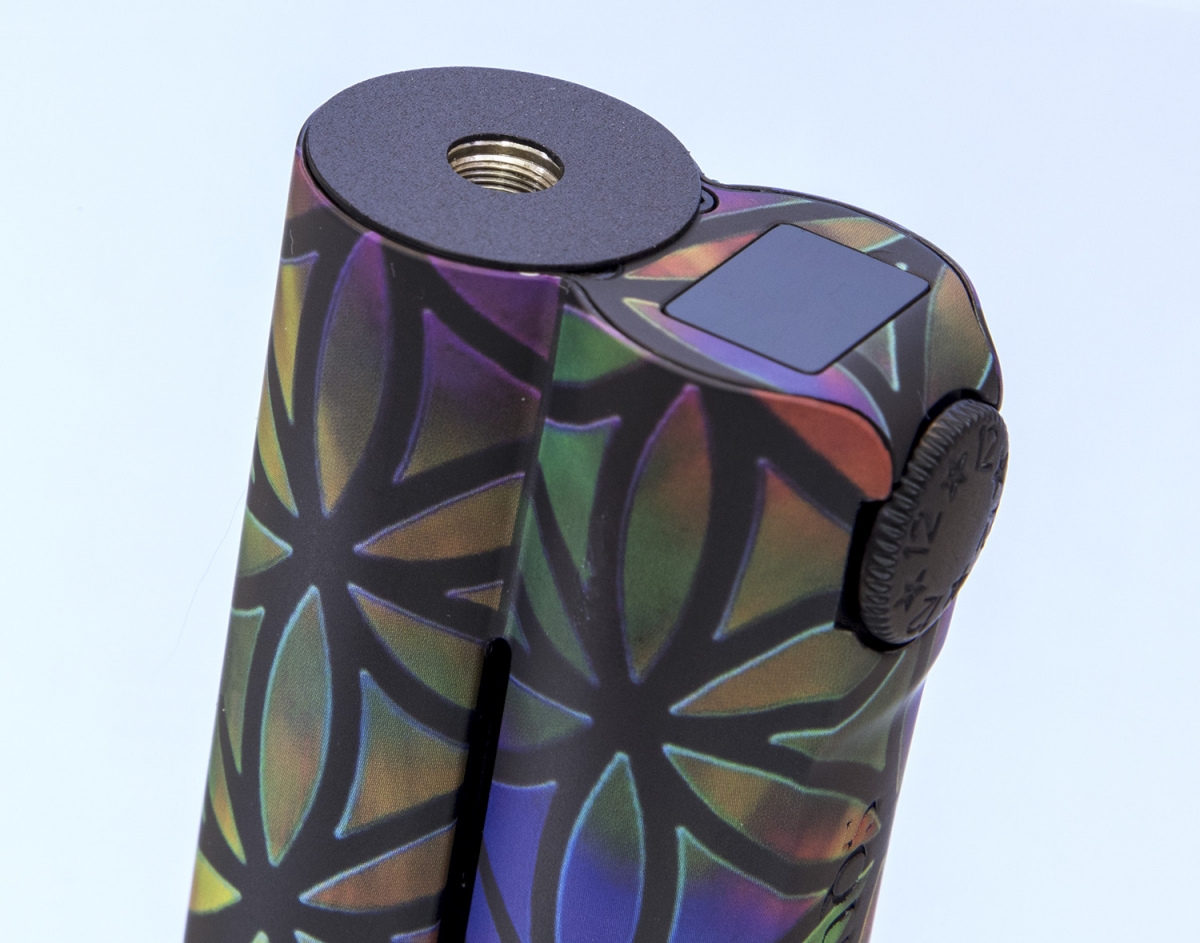 The mod protectors, I can only assume, are for the tank 510 connector to protect it from ‘atty rash’ (scuffing while screwing a tank on) which is a nice addition.

The battery vents are idea. You have space around the battery door but the main one is the gap between the two batteries in the chassis which aids in keeping everything cool.

Tank wise, it takes up to a 25mm diameter without overhang. Anything larger does look bad. I tried the Freemax Mesh Pro on it and the overhang ruined the form factor. I did try some 22mm tanks on it and they looked fine, in fact the Wasp Nano RTA quite suited it. With the colour schemes, it’s going to be difficult to find a matchey matchey tank but black should suit all styles.

So without any settings other than wattage to change, there’s little to talk about here. Simply dial in your desired wattage and vape–simples!

The power delivery is very fast and feels pretty accurate. The ramp up time was almost instant and responsive, the fire button is positioned perfectly adding to the ergonomics of the mod. The shape and how it feels in the hand is definitely one of the Double Barrel's best features, it feels so right, grippy and comfortable.

Battery life is superb, obviously depending on the wattage. It’s a safe bet to last you all day and then some.

There’s nothing really to add, it’s a basic function mod that simply delivers without faffing around. Its simplicity is one of its strengths.

This is a mod I had previously dismissed due to it being so basic, then I was fortunate enough to borrow a V2 from a friend and I fell for it big time. I actually enjoy using this mod, throw a tank on, dial in the wattage, vape and forget about any further fuss, but it’s the feel of it in your hands and using it that’s difficult to describe. Closest I can put it is that it has a charm factor. If I hadn’t held it, I am not sure I would have fallen for its charms.

The Squid Double Barrel V3 is one of those mods that will appeal to new and experienced vapers. Yes it’s very simple but it has something about it that is very attractive, especially in the hand. I remember the first time I held the V2 and thought ‘now I like that!’.

I’m actually puzzled exactly why I love it so much but who cares as long as I get pleasure from using it (that’s what she said!).

It won’t win any awards for features and innovation but it will certainly win some fans.

You can grab one discounted at New Vaping:
https://www.newvaping.com/products/squid-industries-double-barrel-v3-mod 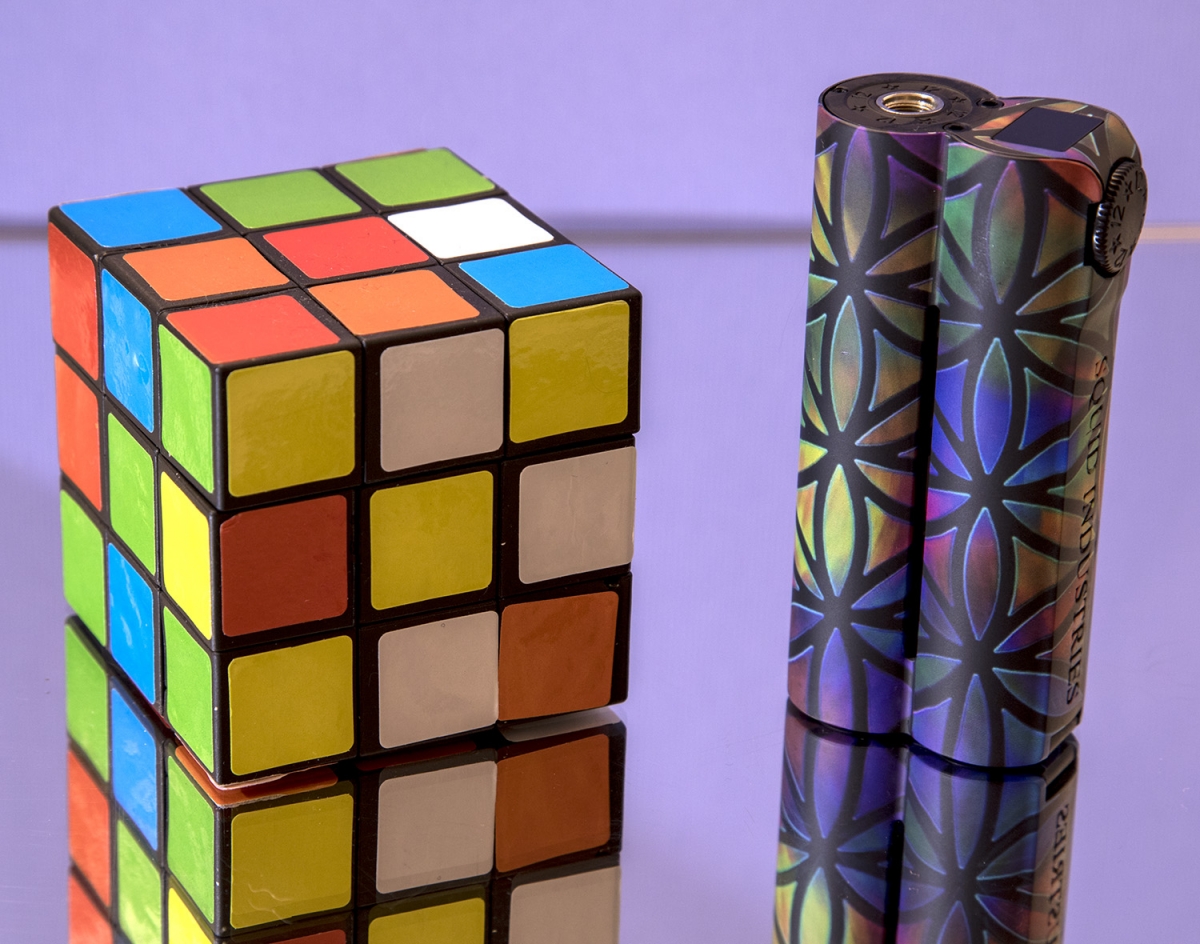