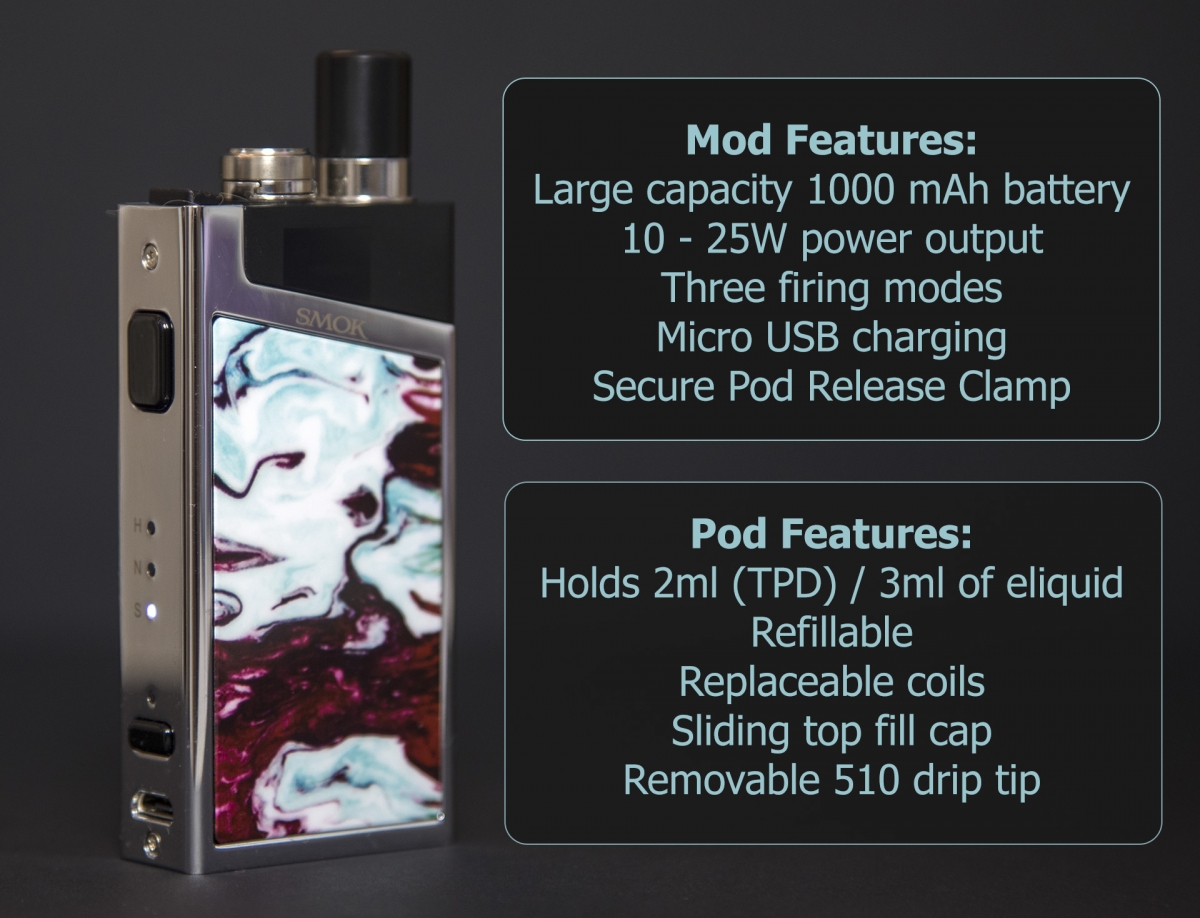 Another bought with my own money review.

In a nutshell review:

The Trinity Alpha is a superb quality, feature packed, great looking device that’s let down by a huge fatal flaw – it’s far too airy without any airflow control  which makes it a ‘cloud chucking’ DTL device only and not a great one at that – AVOID!

***Don’t write it off just yet, I have a bias to MTL for pod devices and use them for Nic Salts so I am going to be as subjective as I can using it as a DTL device and things do get a little better – let the contradictions begin!*** 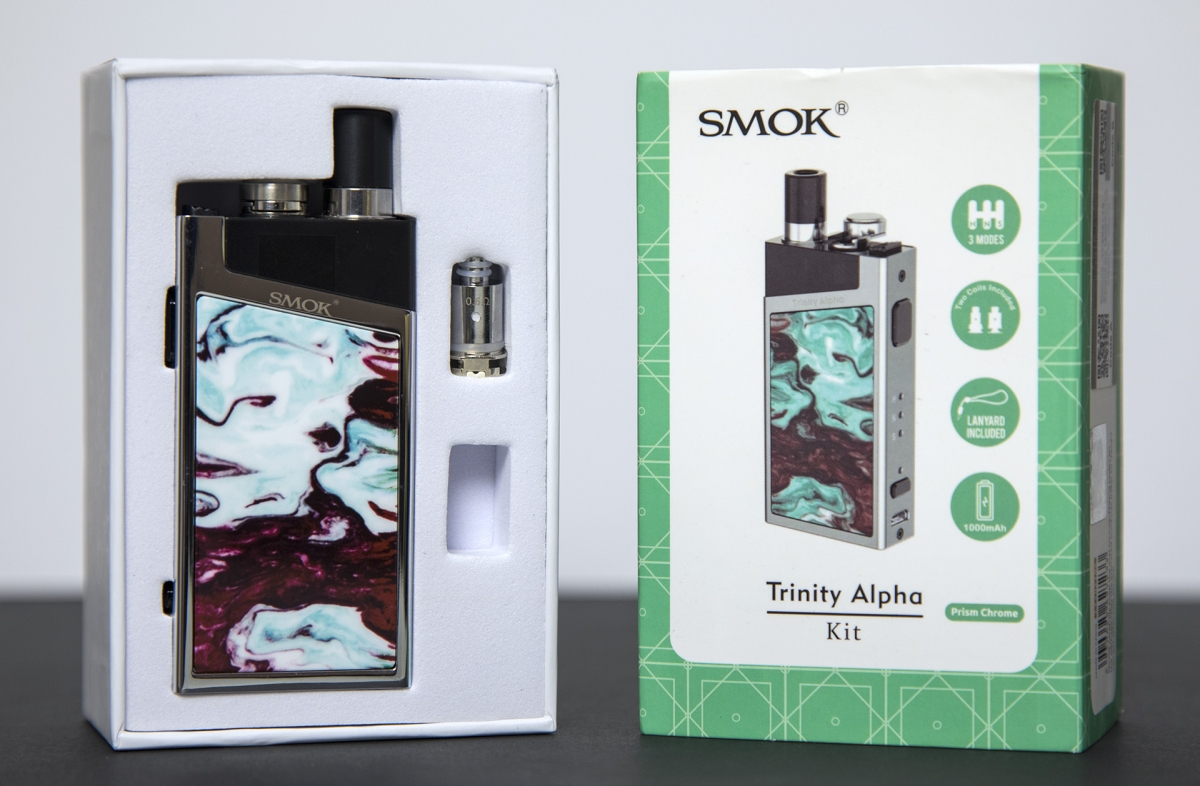 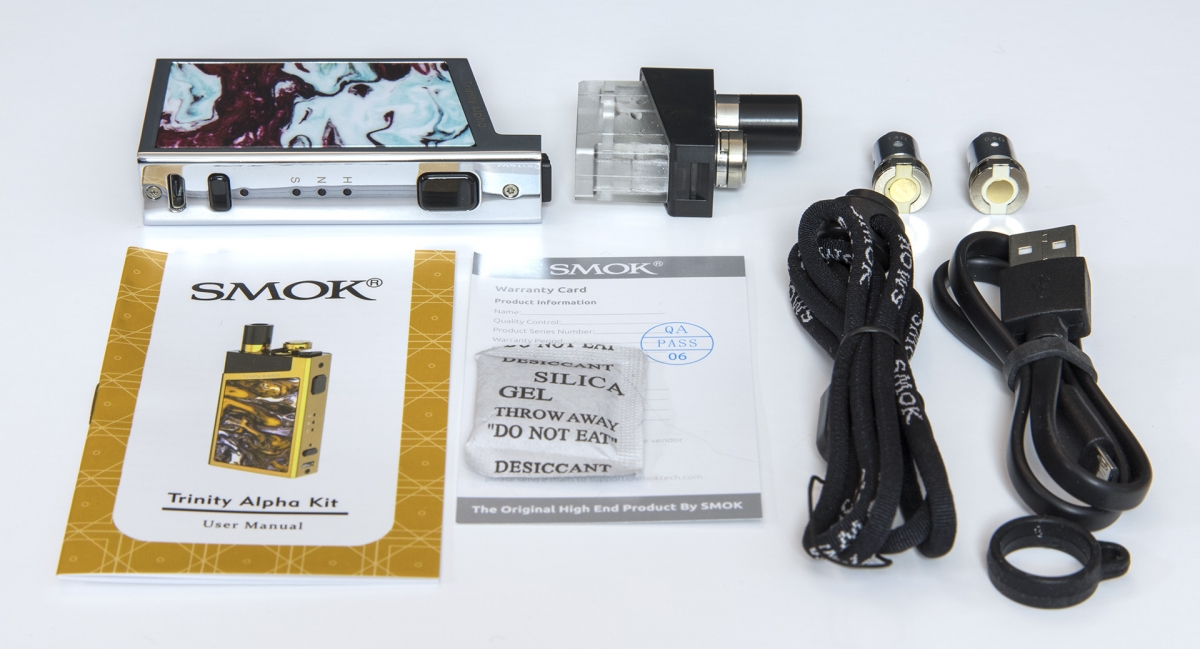 It does appear Smok are making their intentions known by omitting a MTL coil and opting for a 0.6 Ohm coil and a 0.8 Ohm coil, either that or they also discovered it was awful for MTL and thought f**k it we’ll release it anyway!

The box feels cheap which is unusual for Smok but no biggie. The included lanyard is a little too long for my liking but still useful when I’m out and about on my Vespa for a sly traffic light vape.

I tend not to bother with manuals, especially with such simple devices like this, but a quick browse and it’s actually quite well written and laid out, though there’s nothing to gain from it that common sense doesn’t solve. The statement on the back rather amused me: 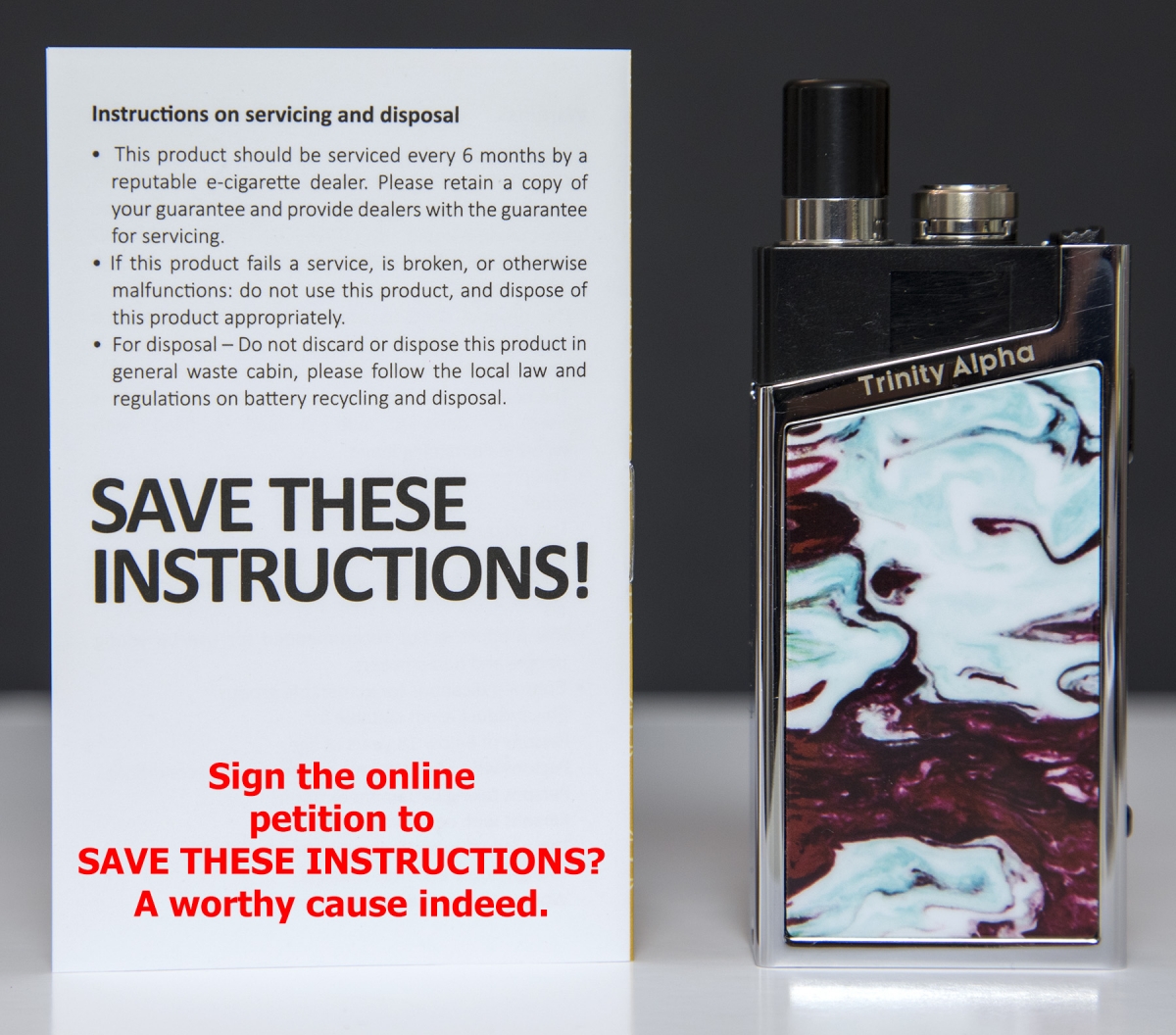 Good luck finding a service centre, it looks like I’ve found a niche in the market – Mod Service Centre! 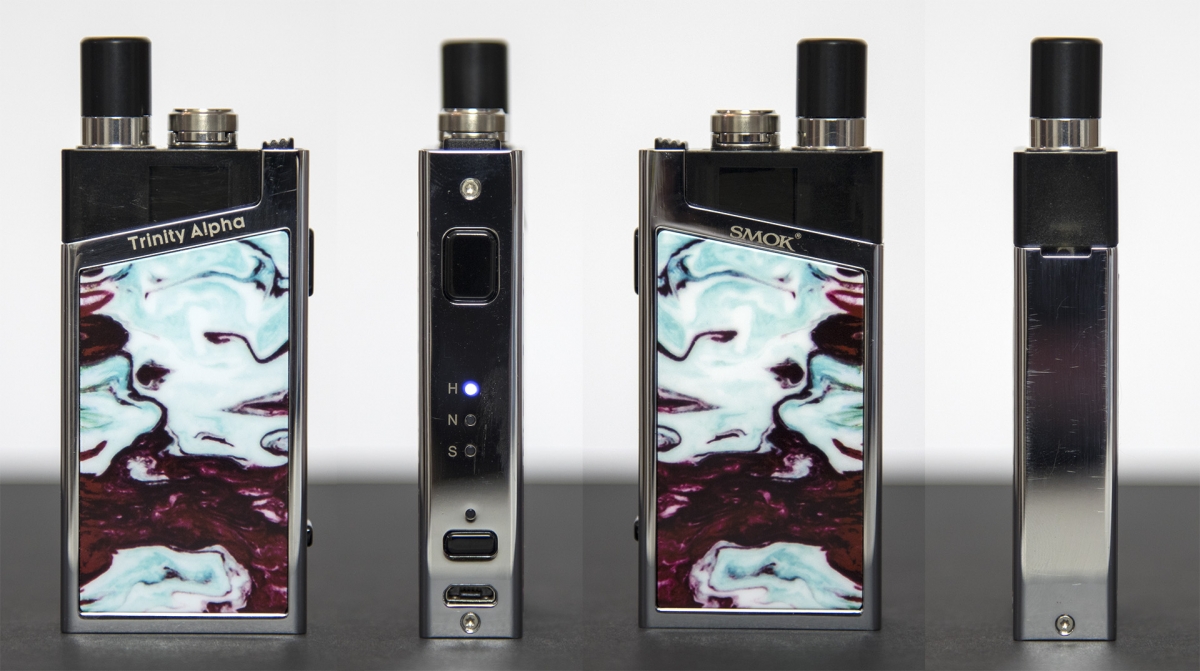 Having owned many Smok kits, the box seemed alien (pun intended) to me. It is cheap and a step away from their usual branding. Once opened and taking the Trinity Alpha out, I was very impressed with the kit. It looks and feels great quality. Keen to try it, I popped it on charge and primed up the 0.6 Ohm coil while I waited. At this point everything was rosy and I looked forward to vaping on it.

Stripping it down was pretty simple and basic. I was impressed with the pod release catch which you pull back to release and press the pod down until it clicks to replace it, a nice feature. The top filling sliding cap also impressed me, but the convenience of top filling was marred by the dark plastic top section which meant you need to remove the pod to fill it any way.

One thing I didn’t like straight away was the 510 drip tip. It’s a very wide bore for an AIO and cheapens the looks, but I changed it for one of my 3.5mm bore stainless steel MTL ones which looked better. 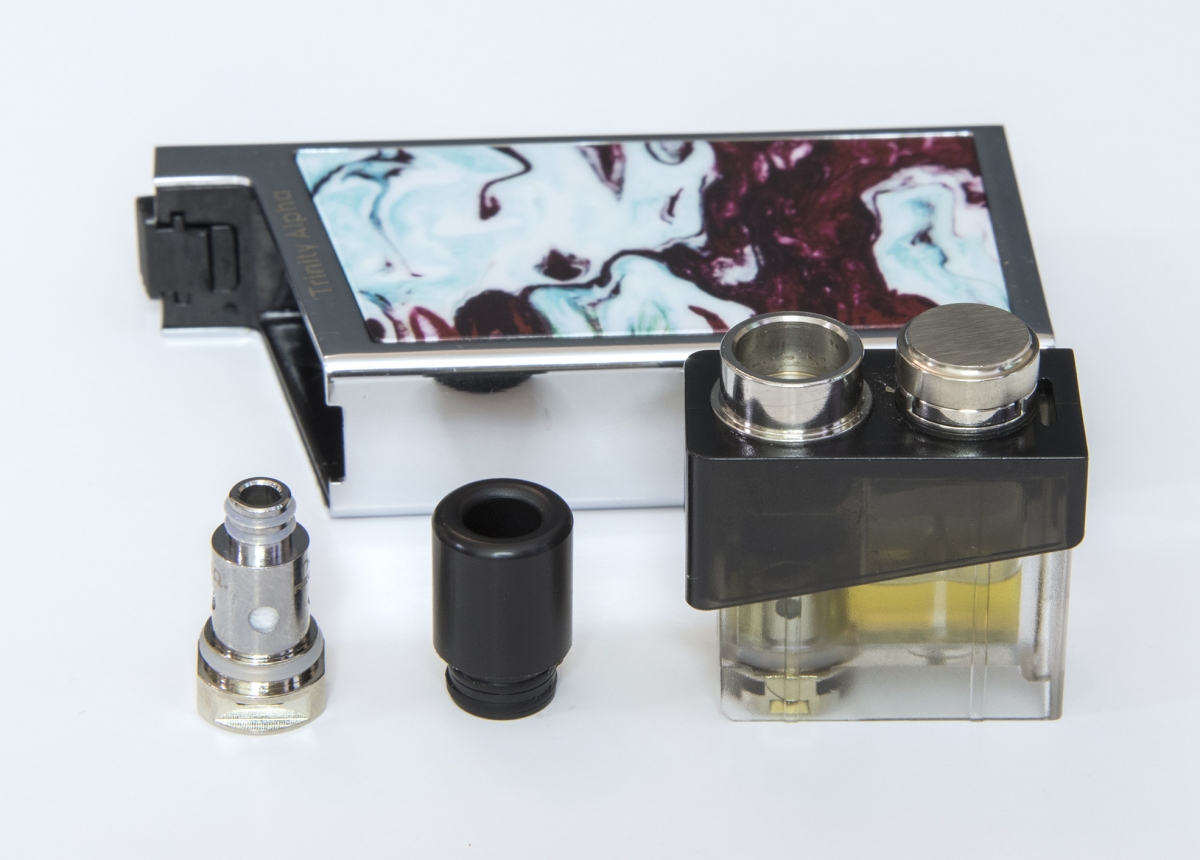 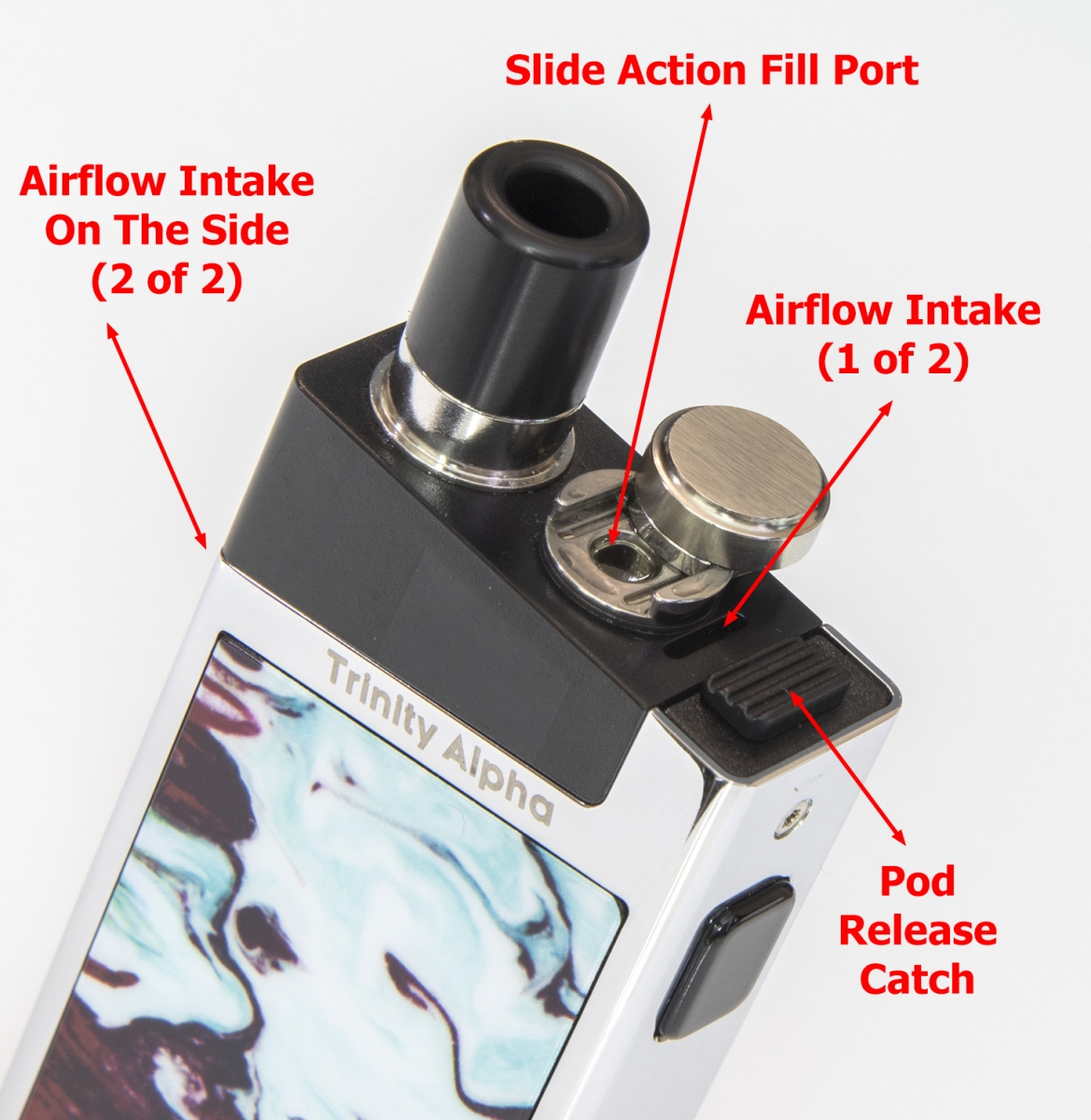 So how does it perform?

After charging and priming the O.6 Ohm Coil, it was time to vape. I tend to use SALT brand Peach for testing to gauge it’s flavour and performance. I first attempted a MTL draw which immediately disappointed me, it was a hot vape and far too airy. This was on the lowest power setting.

So I relented and tried it DTL. It performed far better with the good flavour that the Nord mesh coils deliver and the airflow was ideal, not too restrictive but at the cost of more vapour production. As mentioned earlier, I use pods & AIO’s for MTL as they are ideal for indoor vaping and stealth vaping in public places without huge clouds so, even though the flavour was good, it became totally useless to me and I felt very disappointed with my so far impressive new toy.

Not to be put off I tried a 1.4 Ohm MTL coil to hopefully get a decent pod like vape, but soon found the airflow was far too much for MTL. Even blocking one side off, it was still far too airy and flavourless. At this point my patience was being stretched and my hatred of this device started.

Don’t get me wrong, I enjoy DTL cloud chucking mods and tanks and have a vast collection to choose from, but I only use them outdoors (mainly due to the condensation sticking to my furniture & windows) and I have far better performing kits for that.

I then tried the 0.8 ohm coil and didn’t notice much difference from the 0.6 Ohm, though I did need to increase the power level to 2 to get the best from it.

This AIO could have and should have been a good all-rounder if only Smok had designed adjustable airflow like the most successful PODs and AIOs.

The Trinity Alpha is pretty much useless for me which is a shame as they got most things right apart from the airflow. Anyone familiar with the Smok Nord pod will know that it is also on the airy side, but the Trinity Alpha has more than twice the airflow of the Nord. 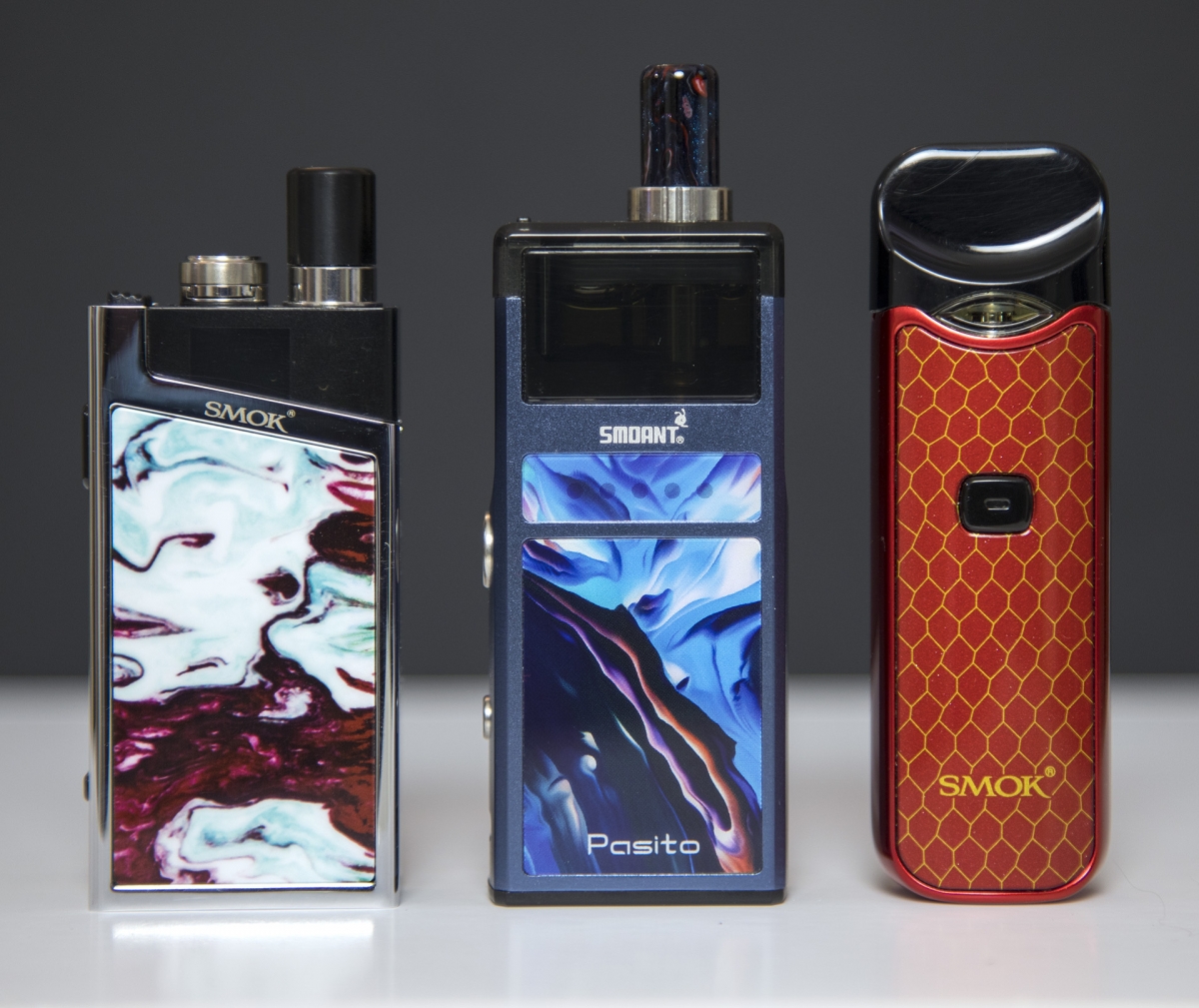 Smok Nord
The Nord is still an excellent pod style system. It has none of the features of the Trinity Alpha and, on paper, the Trinity Alpha should be an upgrade. They both produce the same flavour, but the Nord airflow is a loose MTL and a restrictive DTL and can handle the 1.4 Ohm coil much better. The Nord would have benefitted by having adjustable airflow also, but it’s still usable so I would rate it higher than the Trinity Aplha.

Smoant Pasito
Smoant obviously know the AIO market much better and their system includes adjustable airflow, adjustable power (5 levels), top fill, visible juice level and  easier magnetic pod removal which can be ideal for MTL and DTL. It is simply a far superior pod/AIO and the coils give much better flavour. The cherry on the icing is the game changing RBA (Rebuildable Atomiser) which produces even better flavour. Smok, known for copying, seem to have forgotten about adjustable airflow so the Pasito leaves the Trinity Alpha in the dust. 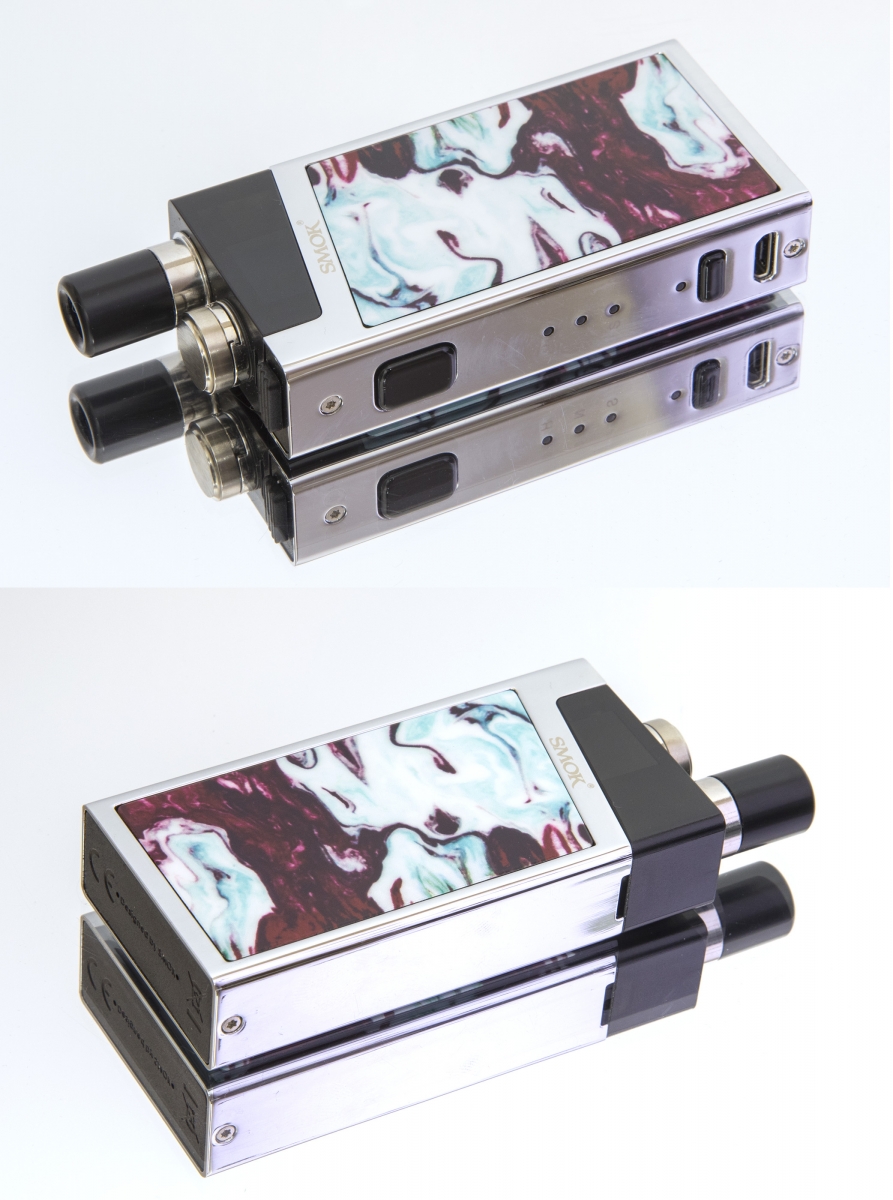 The Trinity Alpha is a one trick pony that is only of use to vapers who want an airy DTL compact device and don’t mind clouds of vapour. If this is your preference, it ticks all the boxes.

If, however, you are like me and want all the traditional benefits of a stealthy pod like device which is good for low vapour MTL and DTL as an additional option, then this kit is not for you (or me!).

It’s so frustrating that it could have been a great device if not for its fatal flaw of not including adjustable airflow. With all its other features and style, it would have been one of my favourites but as it is, I have no use for it and feel I have wasted my money. 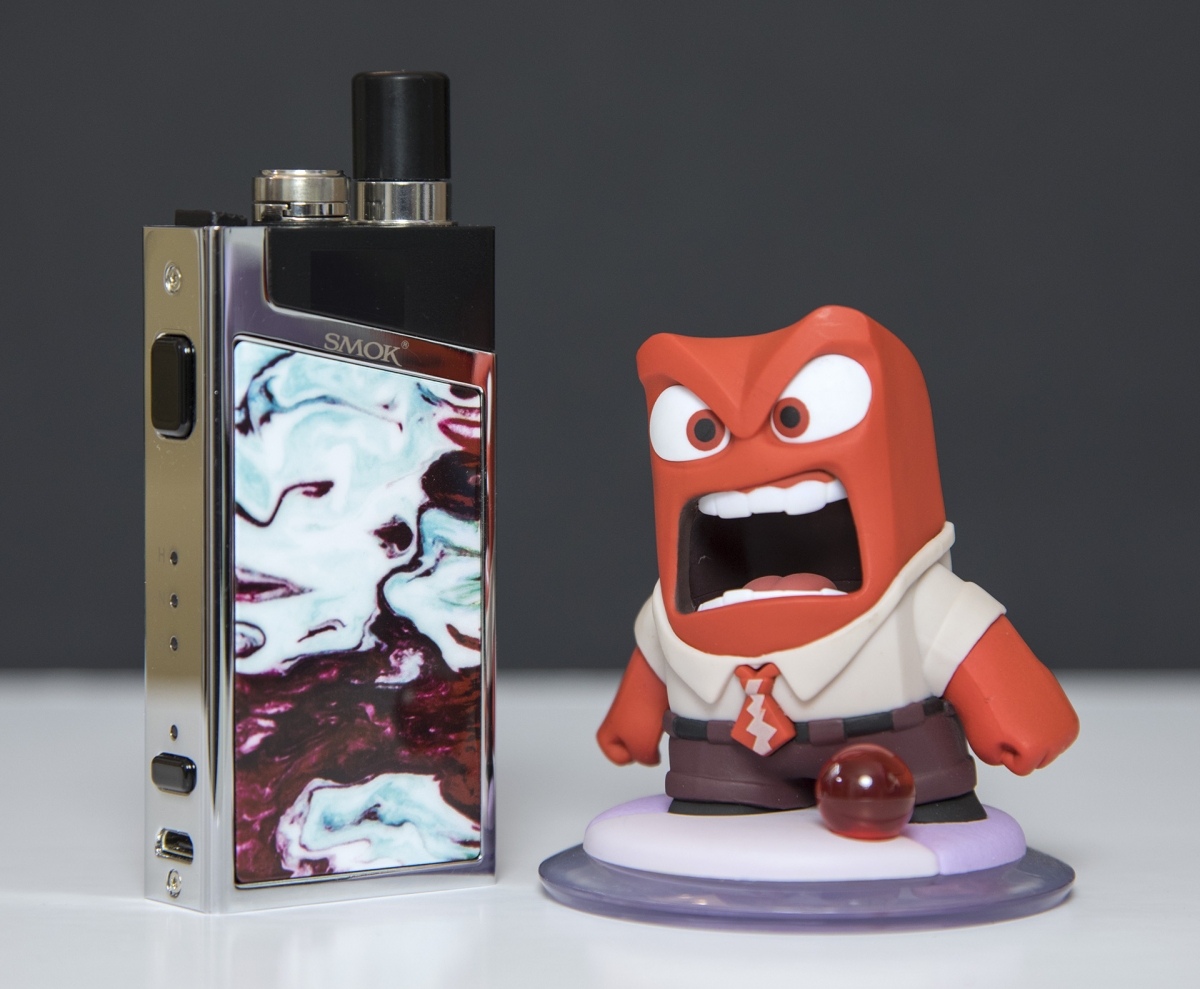 Weighing up the pros and cons you would think this would be a winner, but the cons are huge and a deal breaker for anyone that wants a stealth MTL system. But it is still a great choice if you don’t care about MTL or Stealth.  It does work as a pocket friendly DTL though there are better choices out there such as the Smoant Pasito which is a better all-rounder.

I’m aware this review is full of contradictions but I have tried to balance it against my MTL preferences and hopefully I haven’t left you confuzzled!