Has the world turned upside down? Who would have thought Smok had finally understood MTL? Having already been pleasantly surprised by the NOVO 4 and the Acro, will the Gram-25 meet my fussy MTL standard?

Even more shocking – THIS IS NOT A POD! 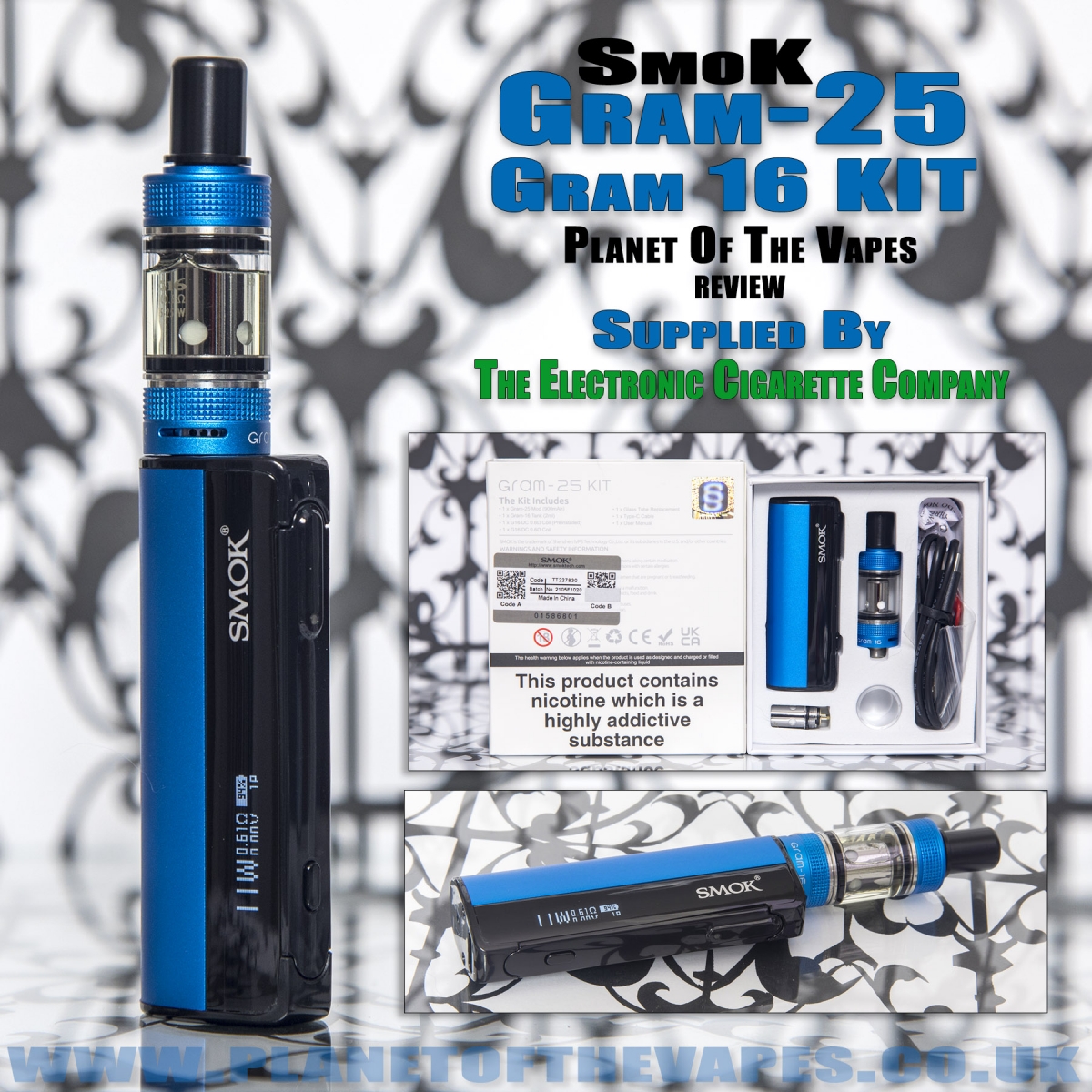 As you can see by the specs, the Gram-25 is a teeny wee device and very light with it, but it still manages to tick a few boxes. I have no idea where the name comes from though as the mod weighs 40 grams and the tank 26 grams. To confuse matters more, the tank is called the Gram-16 which is the tanks diameter. I’m not going to get hung up on this minor detail but if you know the answer please ‘weigh’ in on the forum as it would take a ‘weight’ off my mind! 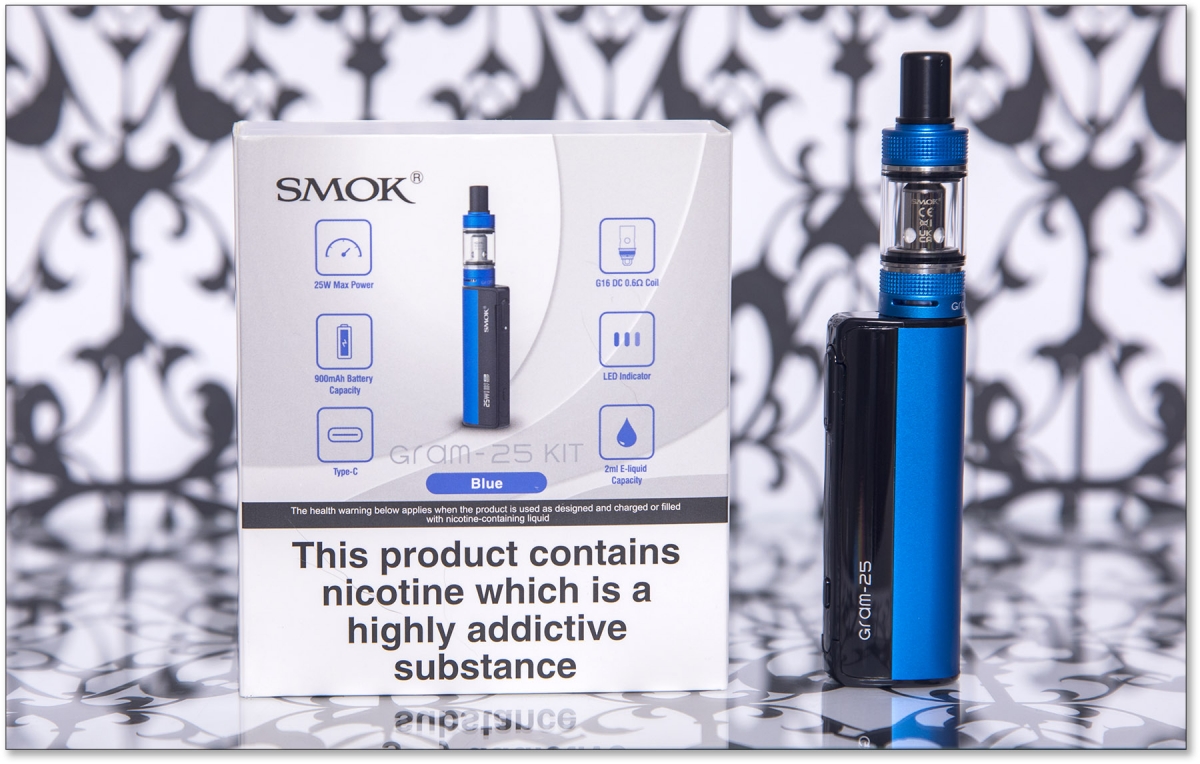 For a mod and tank I was expecting a larger box, but Smok have bundled this kit into a pretty compact little package. I do like mini kits so the box was promising. There’s an outer sleeve and a high quality two piece box inside that. 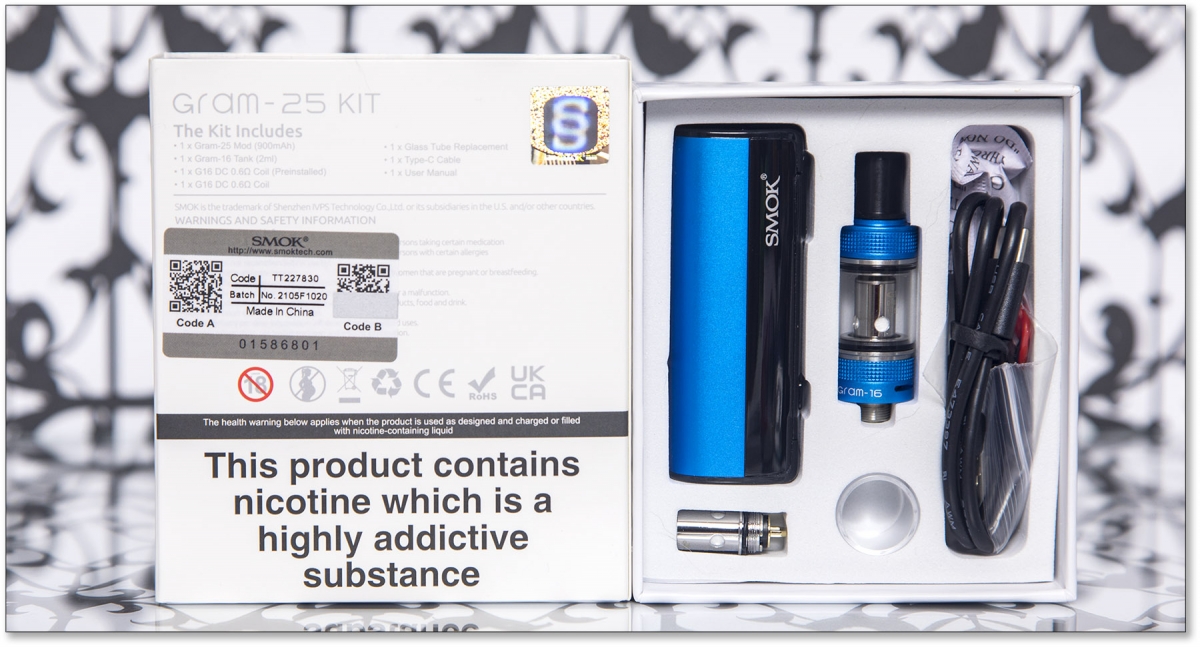 Everything is packed into a single layer and it is quite pleasing to see it all together. Immediately you’re struck with the diddy size of the kit. 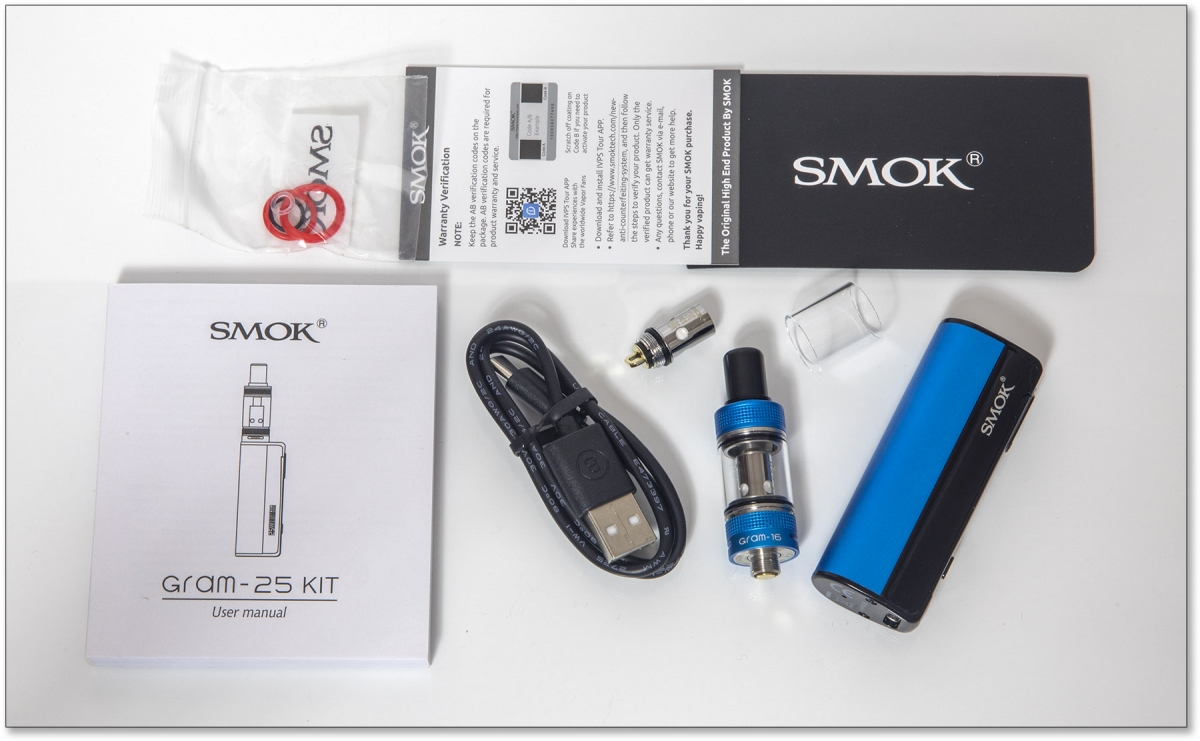 The contents are pretty much what you would expect to see in a tank and mod kit, it’s nice to see one of my main niggles of TPD versions of Smok kits isn’t present in this kit; there’s a spare glass piece which often gets left out on larger kits. The two included coils are identical (0.6ohm).

The only thing I didn’t like was the chunky multilanguage manual, weighing in at 38 grams it’s quite wasteful. For what little instructions you need, these could have easily fitted into a little leaflet or online would have done the job, most of it is bloated filling instructions.

Worse still, the most important instruction was wrong:

WRONG! – “press the Fire key” should be press the Adjust key.

As soon as I saw the kit for the first time, I was all in. I LOVE the size of this kit and better still, it’s a proper mod and tank kit. It was one of those kits that I couldn’t wait to get the photography finished so I could get to use it. 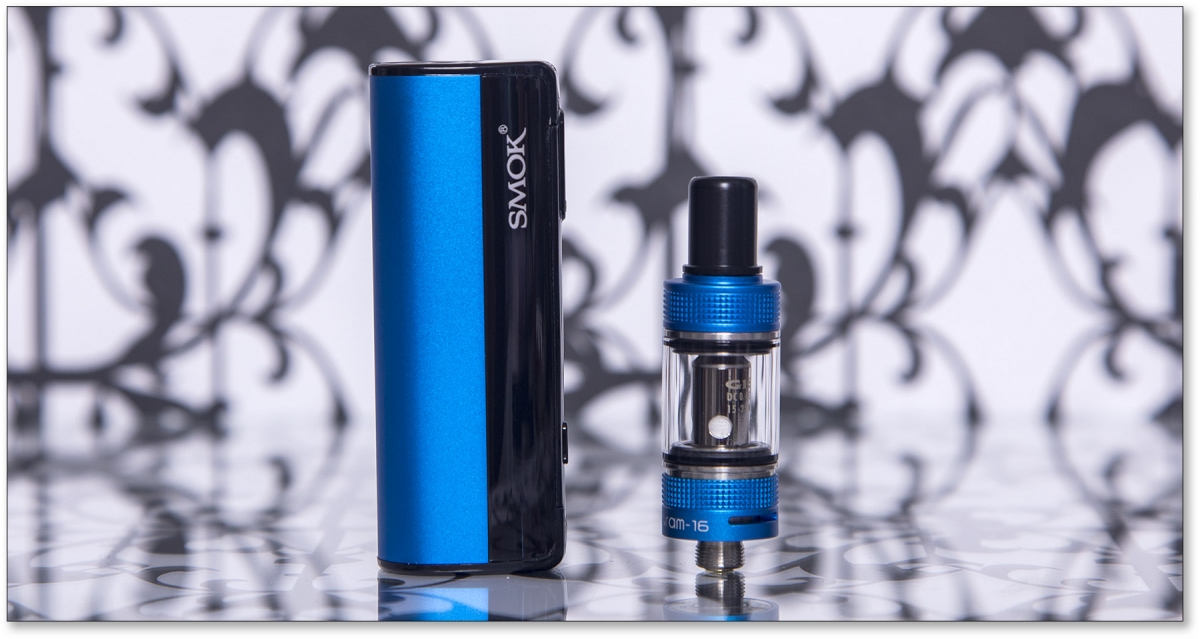 Even handling it during photography was pleasing; it’s so light and ultra-compact in your hand. Proportionally it’s quite tall, but only the tank protrudes from your grip and firing it is intuitive in multiple hand positions.

The design is interesting too, an oval shape with a flat control edge. The screen is positioned on one side which is a little different and is something I really like as your fingers aren’t in the way when adjusting or firing. The majority is lightweight alloy and anodised with a metallic blue finish. The chipset, screen and controls are housed in a glossy black plastic which contrasts really well.

It has a 510 threaded connection for the 16mm tank, I did try an 18mm tank on it but the slight overhang was too much to look good so I would say 16mm is the limit. The tank was quite interesting as I stripped it down. 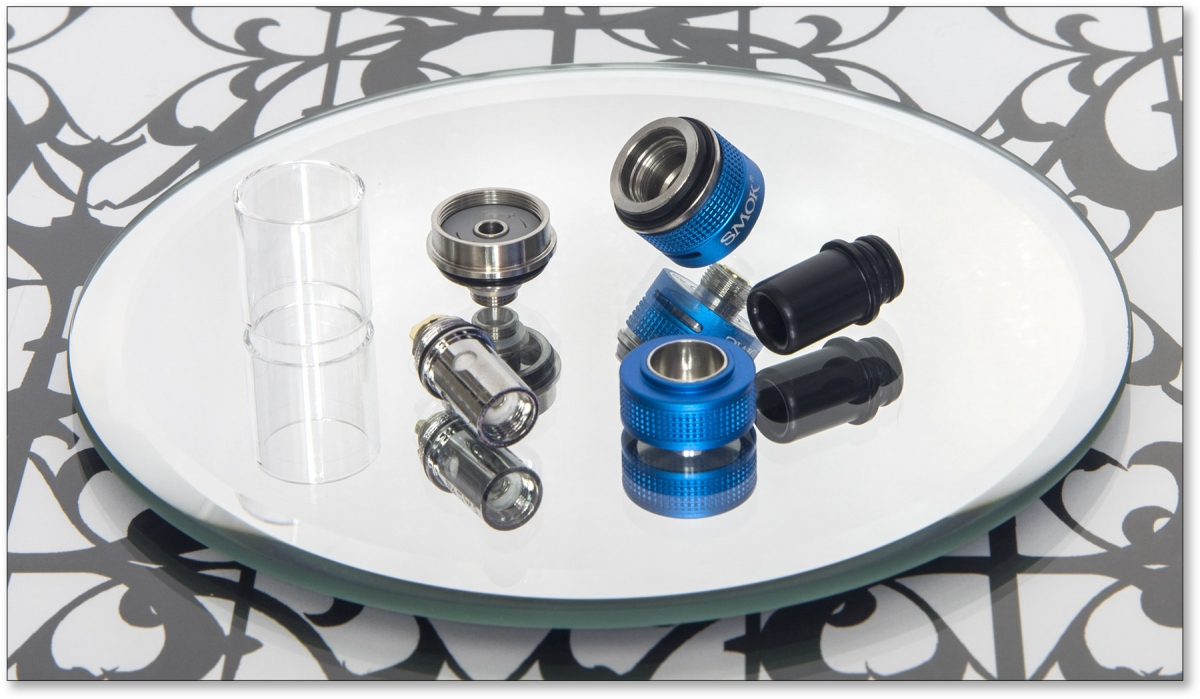 Before I get stuck into the tank, there was a really pleasing surprise. The drip-tip is removable with a 510 fitting – this little feature made all the difference for me. Smok came so close to producing a decent compact MTL kit with the N19 kit but the drip tip ruined it as it was too wide bore and fixed, which made the kit unusable for me. The included drip-tip is a little better but still a little too wide bore for my tastes, no biggie as I could fit my own.

The tank strips down into seven pieces which is fairly common for old-school stock coil tanks. The only thing that was a little different was the bottom section, the airflow adjustment ring doubled as a locking ring to screw/unscrew the tank from the mod. You pull it upwards to lock it to the rest of the tank enabling you to unscrew it. When released, it springs back down and becomes the airflow control, it’s a quirky feature but I’m not sure that it is really needed? 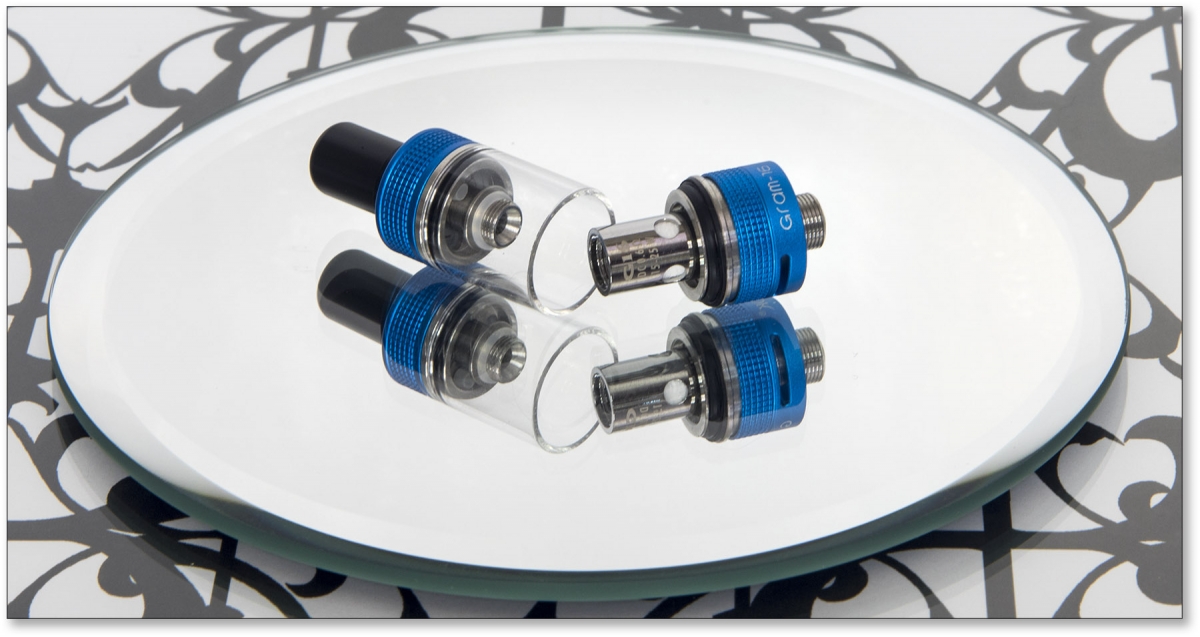 Fitting a coil is easy enough, it is a screw fit into the base then tighten the top assembly onto it, no new-fangled fancy-pancey plug-n-play on this kit, everything is old-school and I like it for that. There was only one niggle at this point, this kit is clearly aimed at MTL users but the included coils are 0.6Ω which is usually more suited to RDL users. Looking down the centre of the coil looked right as it was a narrow bore with dual wrapped plain wire, time will tell whether it gives a decent MTL draw. 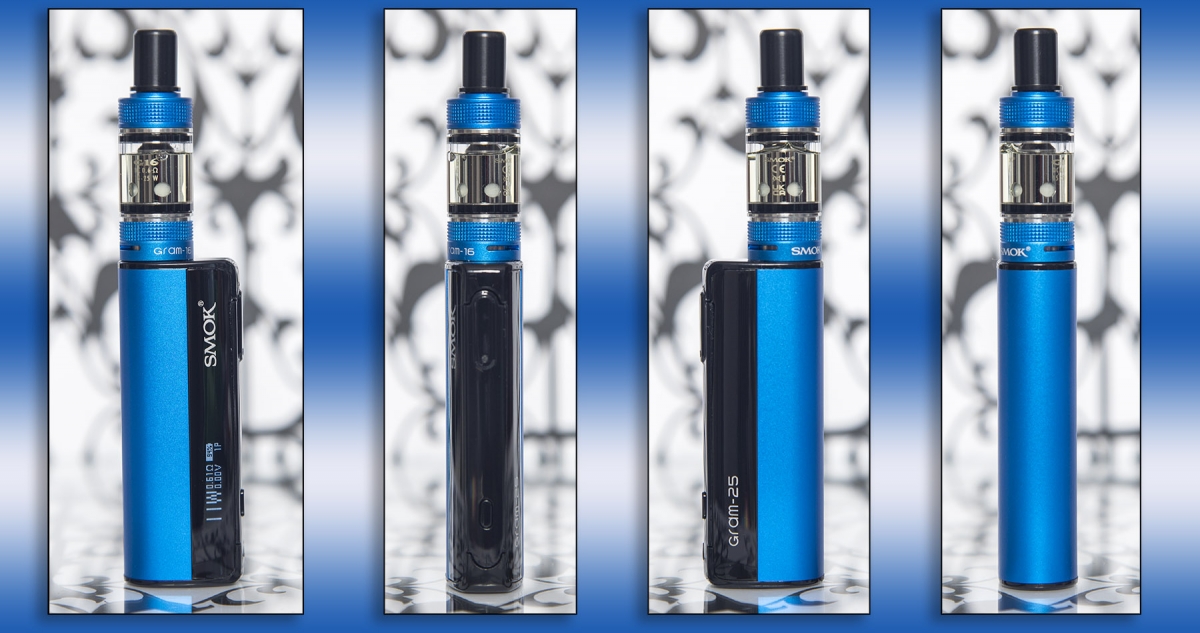 Once assembled, I simply love how this kit looks. The tank suits the mod perfectly, and the matchey-matchey blue anodising and black contrast works a charm. The only thing that looked wrong was the ‘that’ll do’ bland drip-tip, there’s no style to it and it is too wide a bore so I couldn’t wait to swap it over. 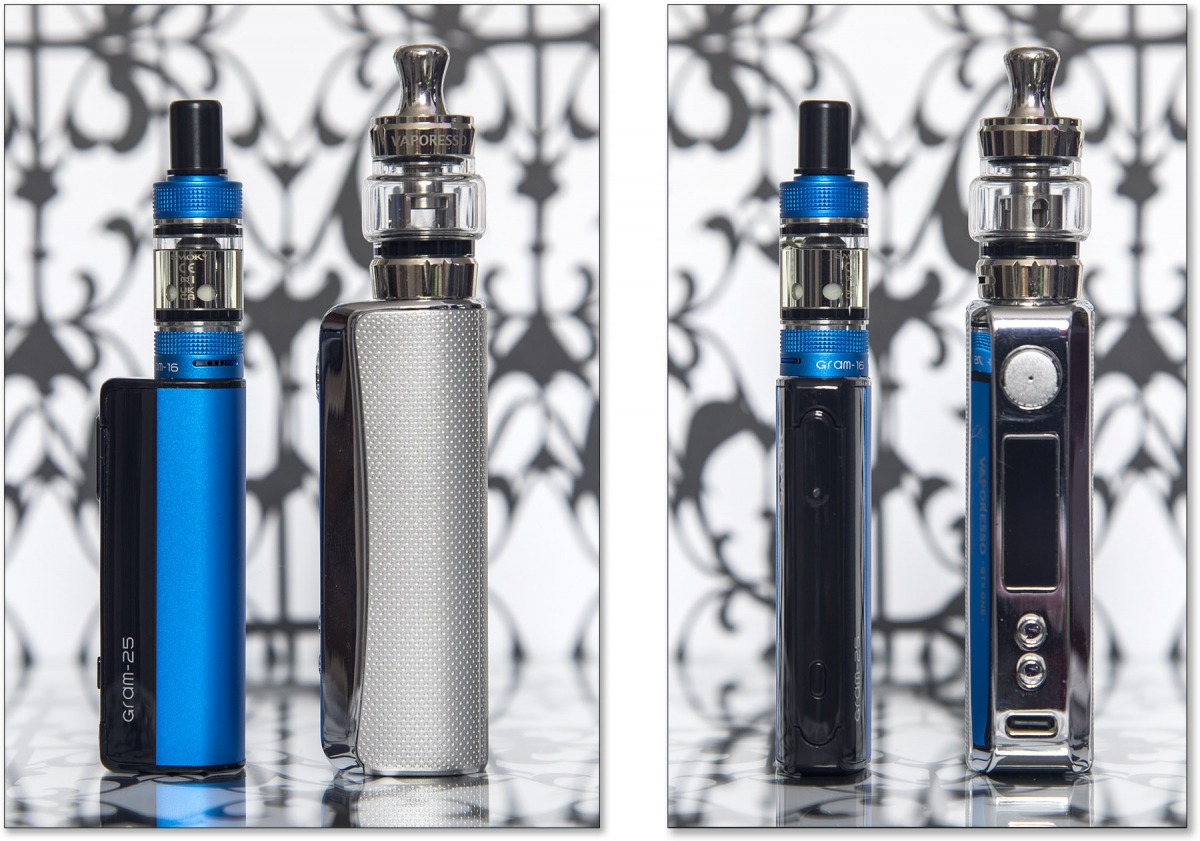 I still haven’t read the 38gram bulky manual, but it was simple enough to work out on your own:

That’s it, recycle the manual as you won’t be needing it! 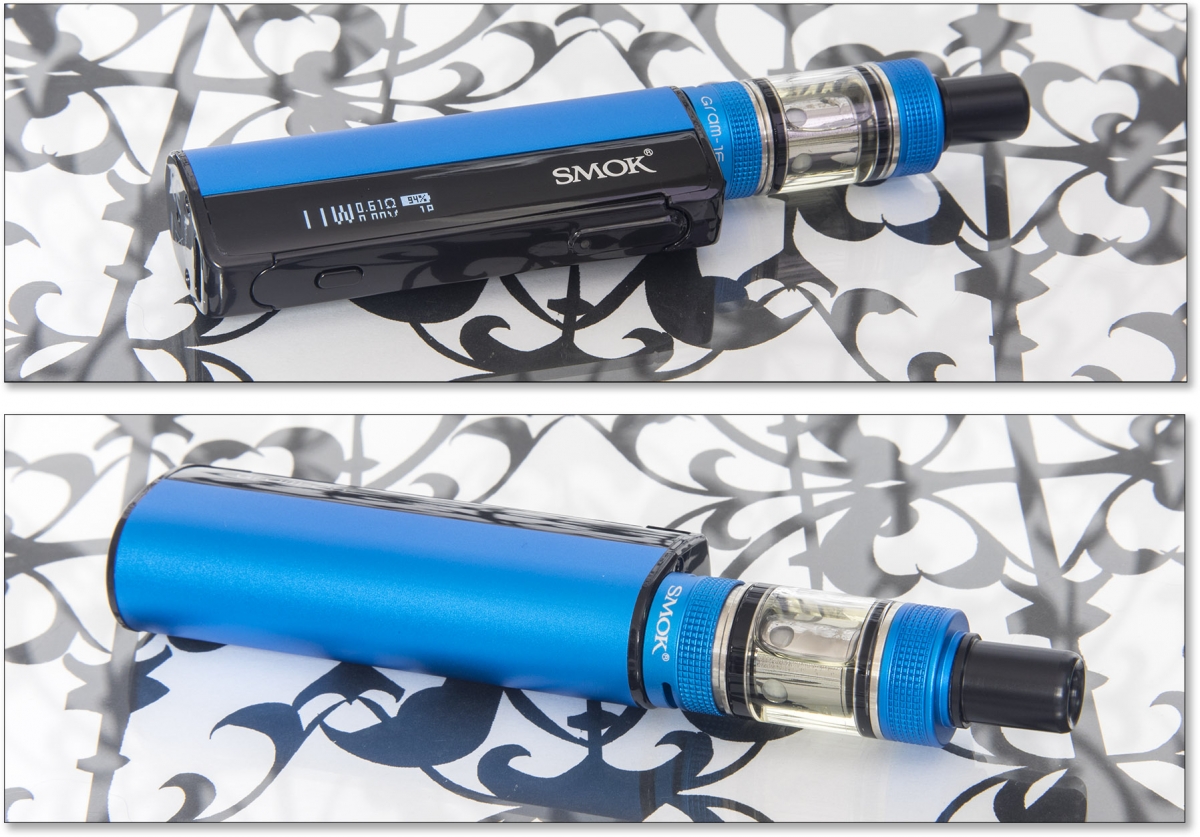 The screen is minimal but clear enough; it holds basic information such as:

It displays puff time while vaping and a little LED in the fire button lights up, this is pretty useless as you can’t see it and I only discovered it by accident. The only use for this is for fault diagnosis as it flashes if the coil has a short circuit etc.

Charging displays the percentage and estimated time remaining. Although it is USB-C, it isn’t fast charging and takes around an hour from 20%, I assume it’s 1 Amp or under but that’s fine for a safety balance on a small device.

Filling the tank was a little fiddly. You unscrew the top cap but make sure you grip the tank while doing it. My first try ended up unscrewing the whole top section, the key is not to overtighten the filling cap and I haven’t had any problems since this lesson. The filling ports are a bit of a tight squeeze but are pretty much mess free. 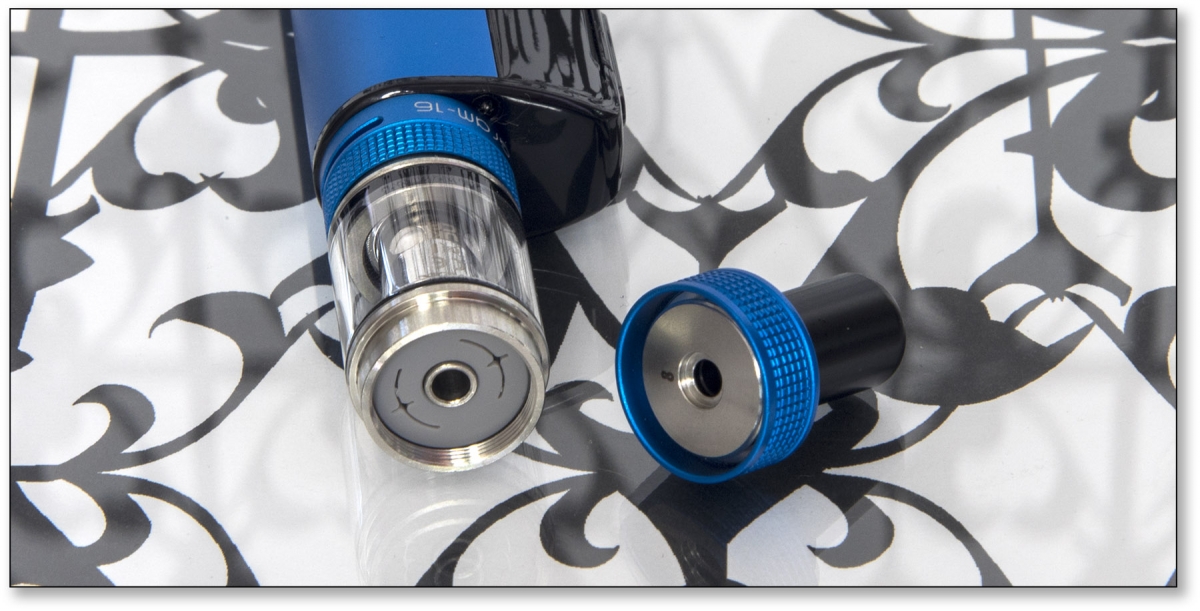 I started off with the 0.6Ω coil first then the 0.6Ω coil, strangely they both performed exactly the same, how strange! I started off around 11 watts to break the coil in but you could tell it needed more power. Working my way up, I found the minimum suggested wattage of 15 watts to be pretty good. The airflow on the smallest hole was a bit too loose and I found closing it off fully gave a decent cheek pulling MTL draw.

Even at 15 Watts, the vape was warm, flavourful and intense, and I was well happy with that! Creeping up to the maximum 25 watts was getting too warm and required the airflow to be opened further, it was obvious at this point that the GRAM-25 was more than capable of giving a decent RDL draw and the flavour was off the charts. Since I was vaping 20mg nic salts, this was too much for me so I went back to 15W with the airflow closed off fully.

I should point out that I immediately swapped the drip-tip for a narrow bore one which was more suitable for MTL, the included one was better for RDL.

Battery life surprised me, I expected the 900mAh cell to only last half a day but it was well into the evening before I had to charge it. I didn’t notice too much power drop off as it got low, but it was noticeable under 30%.

Next to the Vaporesso GTX ONE you can see just how small the GRAM-25 kit is. Comparing the two feels a bit odd to me as they seem totally different animals, the GTX ONE more of a complete package with more features but the dinky GRAM-25 just felt so good and is a very capable vape. At a push, I would say the GTX ONE is better but I’m more than happy to include the GRAM-25 into my rotation. I think the GRAM-25 pips it for the price though, and I am less precious about knocking it around.

Smok are on a roll with recent MTL releases and I am so glad that the GRAM-25 isn’t another frikkin pod! It has been so nice testing this proper old-school mod and tank kit, and I’m even gladder that this is redemption for the ‘almost’ Smok N19 kit.

Up until this year, I had always said “Smok don’t do MTL” as everything I had tried that was supposed to be MTL was always let down with too loose an airflow. I now have three Smok MTL kits that I love, the ACRO Pod, the NOVO 4 pod and now the GRAM-25 proper mod and tank kit. Whoever Smok have employed to develop their MTL products has done a great job, and Smok have won me back.

My main niggle would be the coil choice, hopefully Smok will release a higher ohm coils such as a 1.2ohm. Also these coils seem specific to this kit with no cross-compatibility, unless Smok plan more MTL products using these coils? Let’s hope so.

Smok are starting to make their mark in the MTL market finally. I wouldn’t say this kit is amazing or a game-changer, but it is an ultra-compact and capable MTL kit that I have really enjoyed testing. I personally prefer the NOVO 4 as the draw is tighter than a nuns chuff, but the GRAM-25 is clearly Smok’s best mod and tank kit to date. 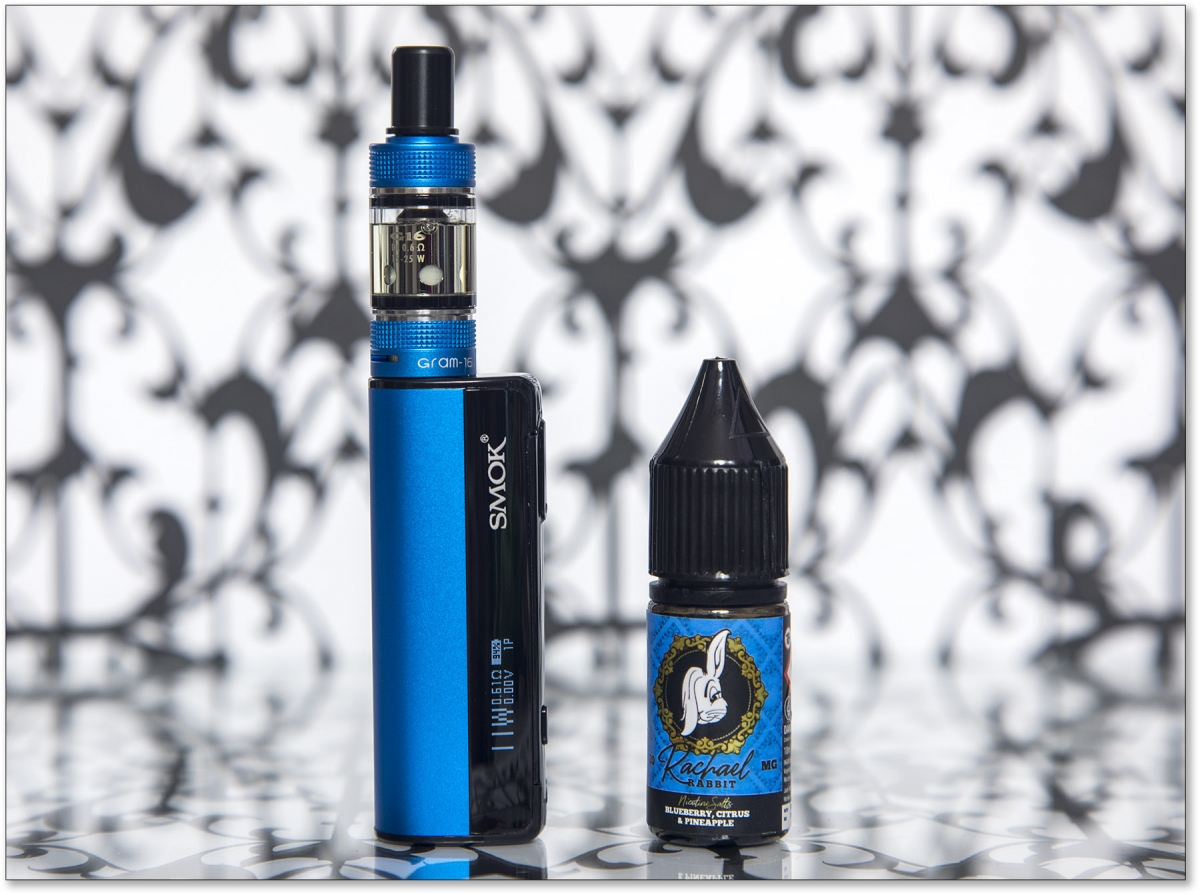