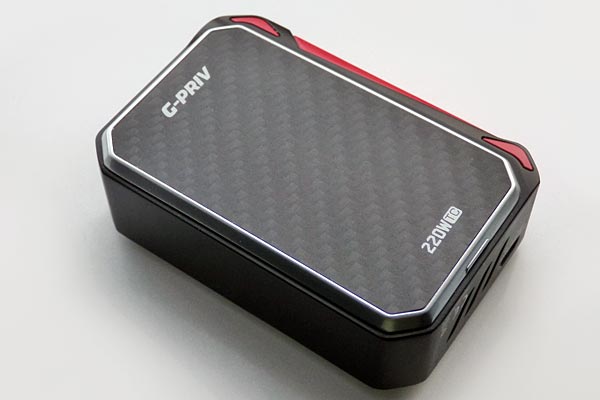 The G-Priv 220W is the latest device from Smok and it features a beautiful touch screen display for ease of use.  The device requires two 18650 batteries and can be used in either Variable Wattage or Temperature Control Modes with full support for all major wire types and firmware upgradability. 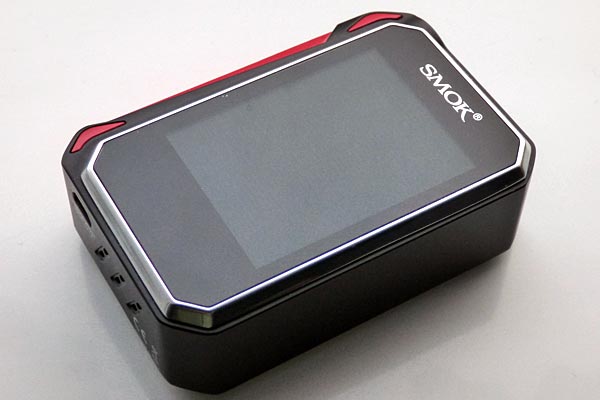 The first thing that really strikes you about the Smok G-Priv 220W is the amazing quality of build, which in many ways is superior to a lot of devices that I have tried lately. The device has an excellent robustness which I found somewhat reminiscent of the older Sigelei mods and it has some considerable weight to it (not uncomfortably so) and it doesn’t feel like corners have been cut in any department. The overall finish is immaculate and the black and red scheme looks highly attractive combined with a small amount of silver accenting and a carbon fibre pattern on the battery compartment lid.

The 510 connector is made from Stainless Steel which means it will last you a very long time. The pin itself is Gold-Plated and spring-loaded so all of your atomizers will sit flush on this device. The edges of the device aren’t heavily rounded so it does retain a predominately boxy shape but they at least nicely chamfered. 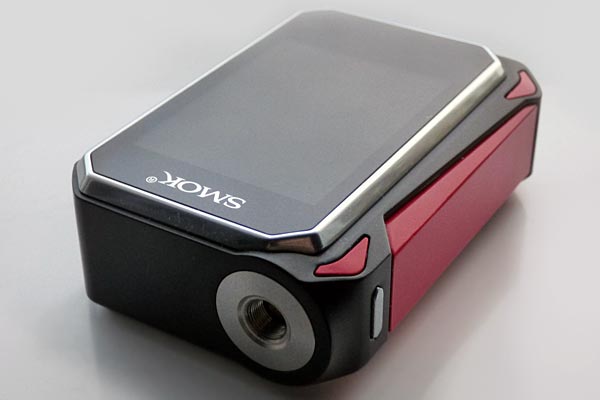 The touch screen itself is a thing of beauty and when powering it on for the first time you are greeted by the Smok logo with a nice touch of lens flare for dramatic measure. The display is incredibly crisp and extremely well set out and the responsiveness of the touch screen is superb! Of course you do need to take care because of how responsive it actually is. I accidentally knocked it on the first day when vaping and found that my Rose3 was getting very hot and after quickly glancing at the display I noticed I was not vaping at my intended 14 watts but 80 watts. This is very easy to do but fortunately Smok have implemented an elegant solution and you can lock and unlock the screen by holding down the button directly above the trigger. What’s more if you are concerned about the large display draining your batteries you can press that button once and turn the display off which essentially doubles up as the device’s stealth mode. Remarkably enough I kept the display illuminated at all times and to be fair I never noticed any significant drain on the batteries but at least the option is there. All of the typical information you might expect including Wattage, Resistance, battery life etc. is clearly shown and all other functions are quickly accessed. The touch screen while not entirely scratch resistant is far less prone to scratching and uses shatter-resistant glass. 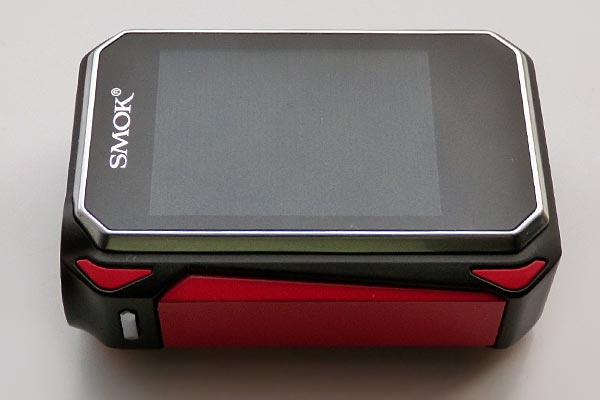 One thing I really found impressive about the G-Priv 220W was the magnets. Have you ever had one of those devices that suffers from shoddy magnets or found that the magnets tend to weaken in a very short amount of time? Well that won’t be a problem with this device because the four magnets are incredibly strong! Battery compartment lid wobble simply does not exist on this device and you will be surprised how well held that lid is when you need to remove it to fit your batteries. There is a small tab to assist you in removing the lid but in my opinion I would rather own a device like this one with a lid that is very well secured in place than one that flies off at a moment’s notice.

The battery compartment has the correct battery orientation clearly marked and there is a ribbon to assist you with battery removal. Plenty of venting is provided by six large air slots in the base. Also located on the base is the Micro USB port which allows you to charge the batteries by connecting the included cable to your PC or to receive firmware upgrades. 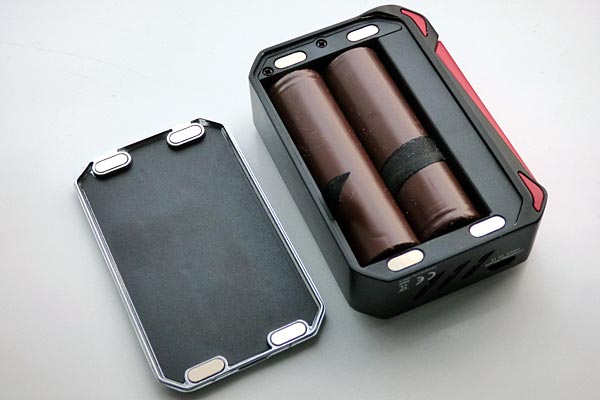 I am not really a huge fan of squeeze trigger fire buttons and to be honest I wasn’t particularly enamoured with the one on the X-Cube II. The issue for me is that the G-Priv is slightly deeper than typical 18650 devices so the sides of the mod do tend to protrude a little which initially made it feel a little weird to use. For the first day I found it bothered me somewhat and in some respects I was wishing for a thumb activated fire button but after more time spent with the device I started to get used to it. In some ways I put this down to the fact I found myself being very conscious of squeezing the trigger instead of just naturally pressing my thumb down on a button but long term I doubt it would be that big a deal.

The manual is detailed and covers all of the functions in depth but what I will say is that the touch screen makes life very convenient and functions are so quickly accessed that if you find yourself bored stiff of five clicks on, then three clicks menu nonsense compounded by plus and minus button selection and fire button confirmation shenanigans just to do the most basic thing then this device will rock your world!

As I mentioned earlier it is important to remember to use the lock button when you have the device set up how you want because the touch screen is highly sensitive and you could accidentally find yourself vaping at somewhat excessive wattage if you aren’t careful.

All of the bells and whistles you can expect from a modern device are incorporated into the G-Priv 220W including Temperature Control, Resistance Lock and support for all major wire types with the real bonus being how easy it is to switch between functions. The display even shows a Puff Counter if you are someone who is really conscious of how long a toke you are taking and how often. 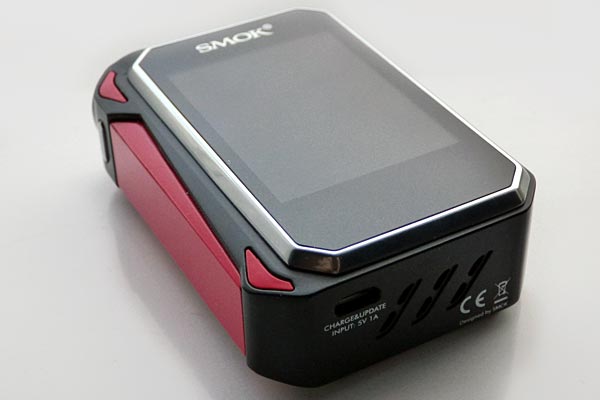 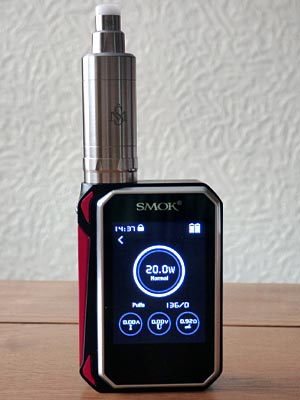 After spending a few days using this device I found it to be absolutely excellent and it had consistent top quality performance! Resistance readings seemed to very accurate and I had no problems at all whether I vaped it in variable wattage mode with my Kayfun 5 and GP Heron V2 or in Temperature Control Mode using my Freemax Scylla.

The ease of use is certainly this devices most appealing feature and you can effortlessly swap between functions quickly without any hassle. Pre-heat and initial resistance can be adjusted through the menu if required and there is full support for all major wire types. As I said, the squeeze trigger did feel a bit weird initially since I am so used to typical thumb activated fire buttons, but after a while it became second nature.

Battery life was pretty impressive and I felt I got more vape time out of the device that some of my older dual 18650 mods which suggests to me that the G-Priv 220W is very efficient. Given that I typically vape at much lower Wattages these days it isn’t surprising that I got a couple of full days of use out of it before having to replace the batteries but even when using it in Temperature Control Mode I didn’t feel it was draining the batteries especially quickly.

It has been a while since a device appealed to me as much as this one because the Smok G-Priv 220W works so very well and I found myself reaching for this device often. I do think this particular device will certainly be going on my list of future mods to purchase.

The Smok G-Priv 220W is an awesome device and offers the ease of use of a smart phone combined with high Wattage, Temperature Control and support for all major wire types. The touch screen is incredibly useful (as is the switch which enables you to lock it) and it makes operating the device an absolute breeze. In some ways it is a feature that you may be paying a slightly higher price for but then it could be the one thing that really makes this mod truly stand out to you and convinces you to purchase it.

Price varies heavily and I have seen the device being offered for anywhere between £65-£90 (mainly pre-orders at the present moment due to low stock) but when you consider this devices overall excellent quality of build I must admit that I find myself very tempted and I do feel that it is definitely worth it.

One major advantage of the touch screen is that it will make the device very approachable to anyone who has shaky hands or suffers from Arthritis and since most functions only require a few quick touches of the screen you don’t have to put up with cumbersome menus and constant button clicking. The squeeze trigger does take a little getting used to if you mainly use thumb activated fire buttons but anyone who has used a similar system like Smok’s X-Cube II will feel right at home.

Now if a fancy screen was all this device offered I would advise some restraint but the truth is the device really does perform flawlessly in whatever mode you choose to run it in and the added bonus is that it is extremely easy to use, well-built and very stylish. For those who want high Wattage the option is there with up to 220W of power available, not that you will ever need that much in most cases. For more modest users long vape time is something this device certainly offers and I found that the dual batteries lasted me two full days when using my Rose3 RTA at 14 watts.

In my opinion Smok have come leaps and bounds of late and this product is an outstanding offering that will certainly appeal to many people. If you were to buy this product you will not be disappointed!

Many thanks to SMOK who kindly sent this device to Planet of the Vapes for us to review. 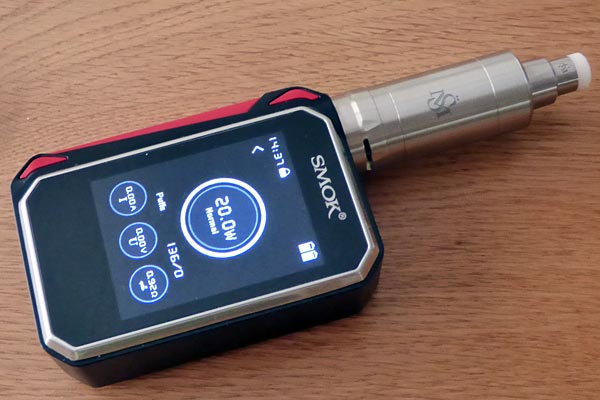