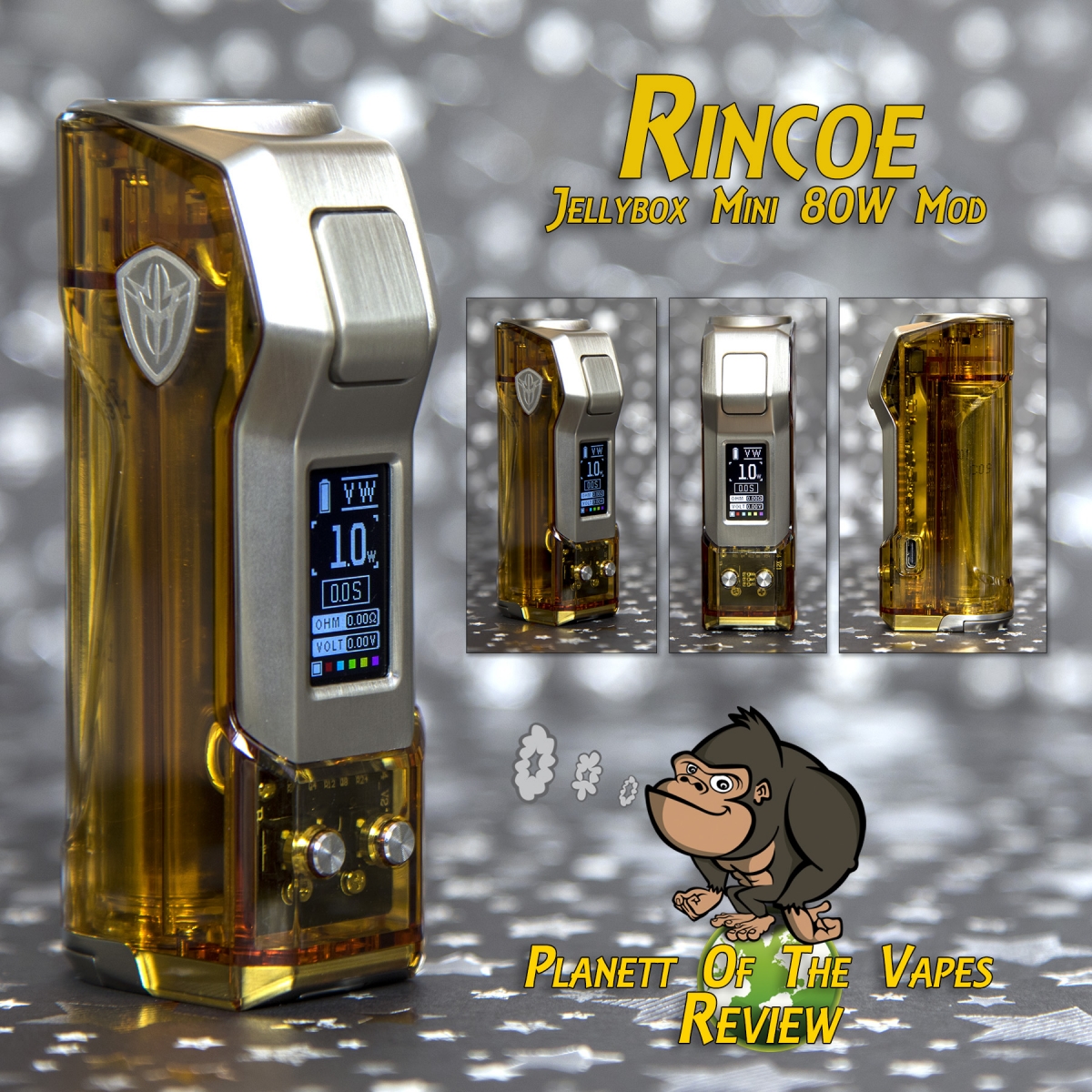 Having reviewed the Jellybox 228W a couple of months ago, I was happy to take a look at its little brother, the Jellybox 80W Mini. I loved the 228W which was not only great value but a decent dual battery mod for attys that require the higher wattage that it offers. The 80W meets a lot of my needs. On average in my RTAs, I vape around 55-60 watts, so with a 21700 battery I expected the Jellybox Mini to suit me nicely.

Generally the Jellybox Mini 80W is as it sounds, a smaller version of the 228W and it uses the same chipset, but they weren’t lazy as they have designed it to be ergonomically different with the face-plate and fire button.

The box is quite basic but it does the job. It is a simple cardboard box with an outer sleeve showing the device and contents with a sticker showing the colour choice. 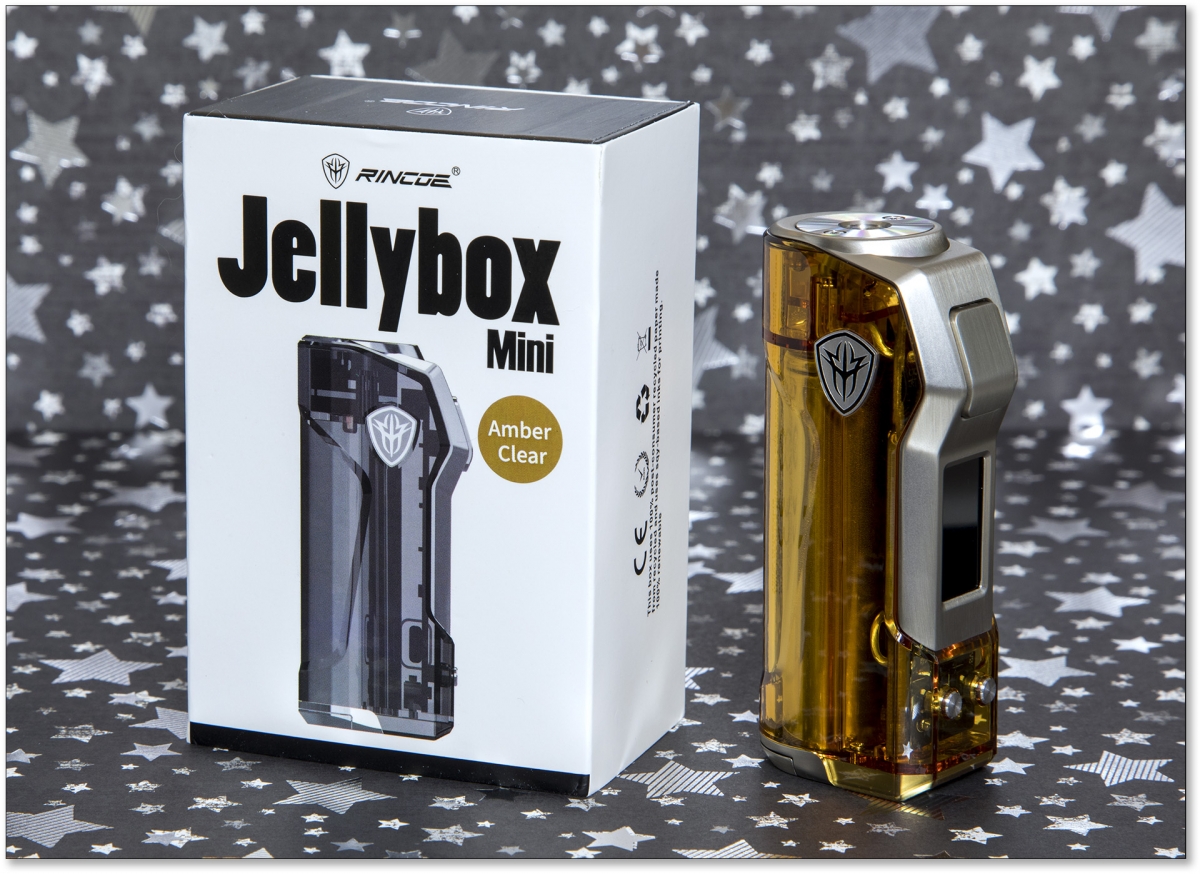 Removing the outer sleeve reveals the device held in place with foam. Underneath that are the included extras: 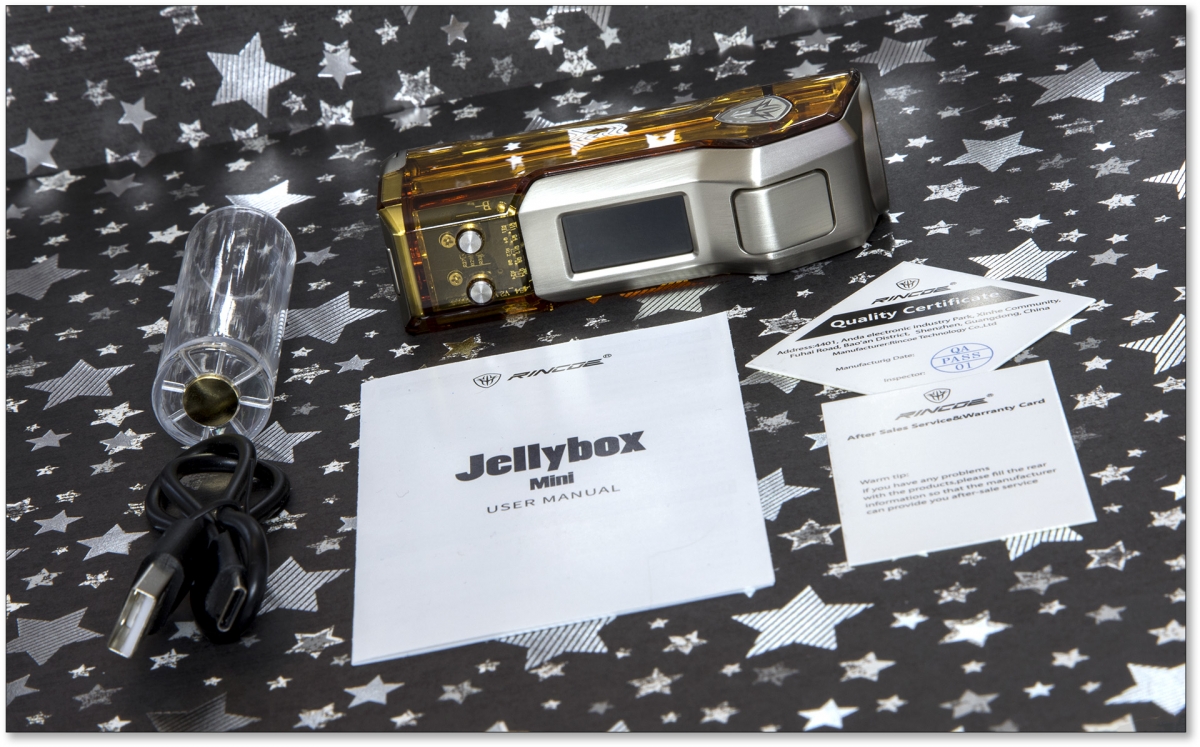 As this is just the mod, then you shouldn’t expect too many bits and bobs. You get the mod, and 18650 adaptor, a USB-C cable (which is a bit short), the user manual, and the generic QC scraps of paper.

Picking the mod up for the first time is when you get a real feel for how light this mod is. Even with a battery and tank fitted, the weight is still really light and I love it for that. Despite it being so light, it still feels solidly constructed and hopefully durable, though being plastic I can’t see it surviving a heavy bashing. 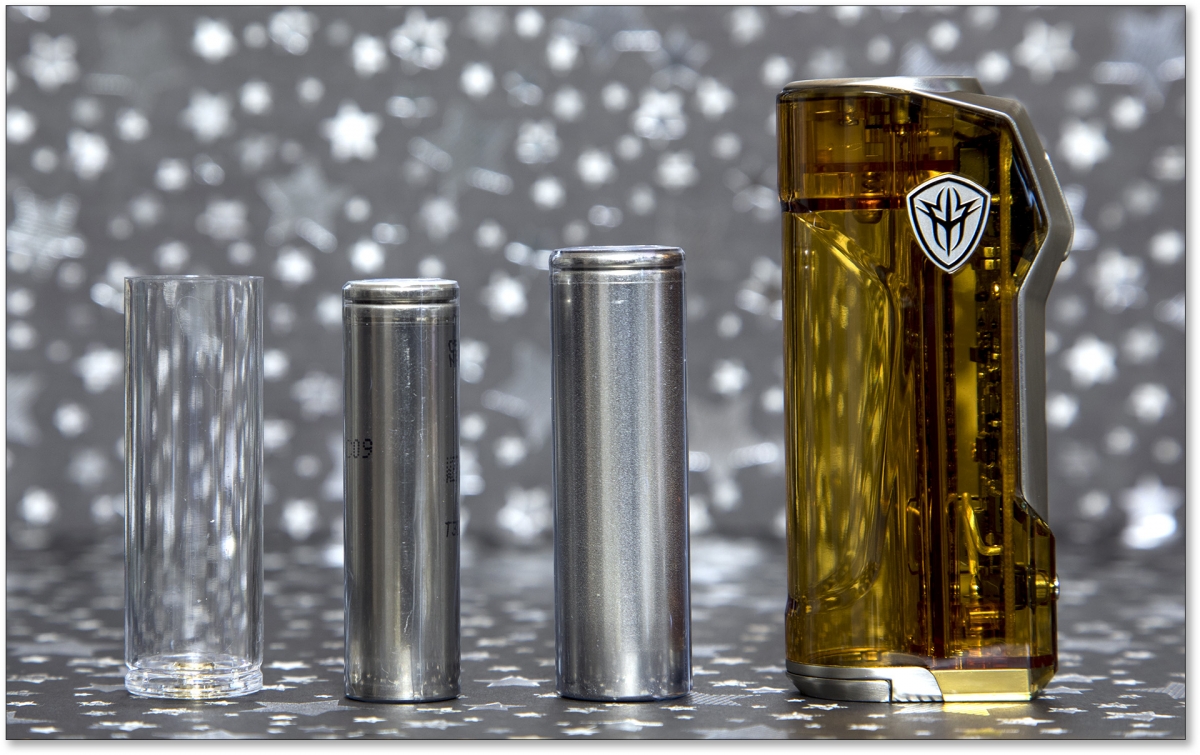 I was pleased to see that the Jellybox 80W had the three battery options, 18650, 20700 or 21700. My preference would always be the 21700 for more power and longer battery life, this will easily handle my 60 watt tanks, but having the option to use other batteries is always welcome.

The included 18650 adaptor is transparent which I appreciate as you can still see your chosen battery wrap. I tend to go for clear wraps for a more mechanical look. 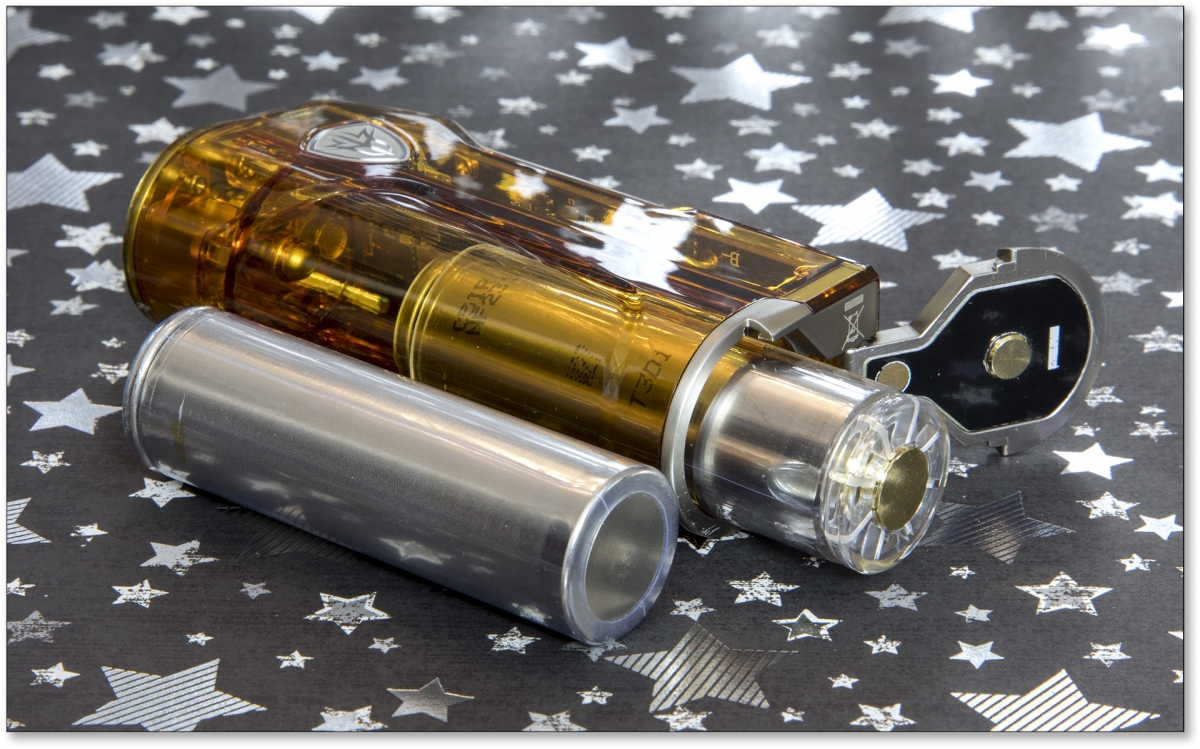 The battery door is loose without a battery but tightens up just right once fitted. It has been firm enough that it hasn’t popped open in my pocket or bag.

Branding is minimal and the little shield logo adds to the styling. I really like the way they have done the firing button at an incline, it feels natural to thumb fire and is ergonomic. Speaking of which, the overall ergonomics are spot on, it feels so natural and comfortable in the hand. 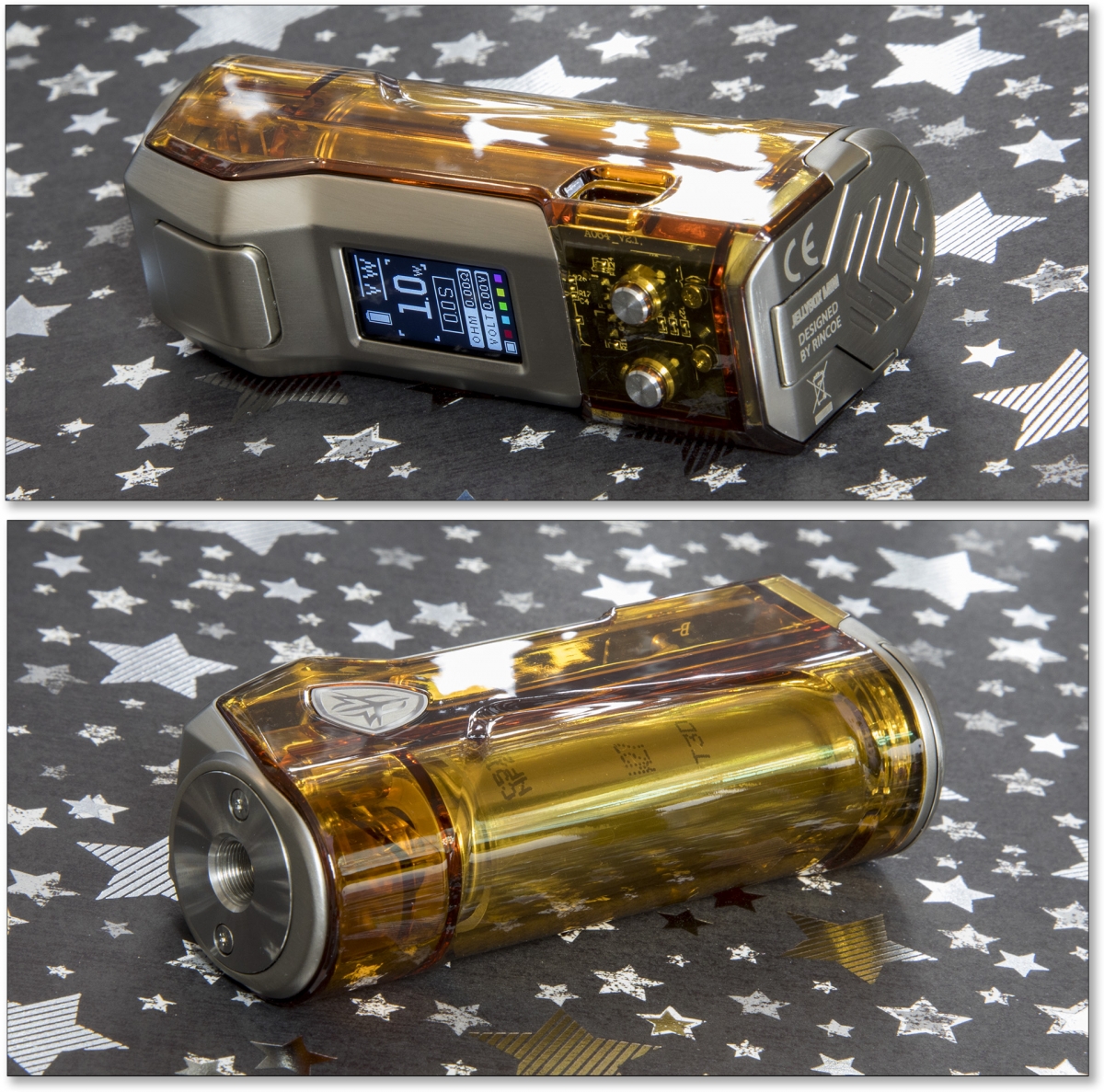 The control buttons are quite small but easy to use and quite tactile and clicky, they always feel out of the way when vaping so I’ve had no issues with accidental adjustments.

The Jellybox is pretty basic and most users won’t wander passed the default VW (Variable Wattage). It has three TC (temperature control) options: NI, TI and SS in either fahrenheit or celsius, but there are no fine tuning options so I doubt I will ever use it for that. Adjustment are slow to scroll through, but it does round robin in all modes.

The screen is nice and bright, everything is clear and easy to read. You can change the colour scheme which also changes the colour of the LEDs to suit the theme. I like that it keeps one colour as changing to multicolour would have been a touch annoying for me.

The LEDs only light up while vaping and are pretty bright. Though there’s six LEDs, they are positioned in a way where you only see the effect of three but brighter. I enjoyed vaping with the LEDs, especially outdoors at night, clouds and lights go well together. I’m happy to amuse my little mind on my own in my garden, but I would likely turn the LEDs off in public. At least you have both options.

Battery life is pretty good considering the bright screen and LEDs, it easily lasted me half day and then some using it at 55 watts. Charging can be done via the USB-C port and offers 2 Amp fast charging, but I always charge my batteries outside the mod in a dedicated charger.

Performance wise, I only used it in VW mode and it fired very fast and I noticed no lag. There’s very little to say here except that it does what it’s supposed to, there was simply nothing that annoyed me and it was a joy to use.

The Jellybox 80W has the same size 510 base as the 228W so it will happily take tanks up to 26mm. Most of my RTAs or stock coil tanks are SS or silver so the SS metal part made almost every tank I tried on it look just right. Surprisingly, I liked popping on the Vapefly Siegfried Mesh RTA which is bloody tall. You would think it too tall for a single cell mod, but I really liked how it looked and vaped. 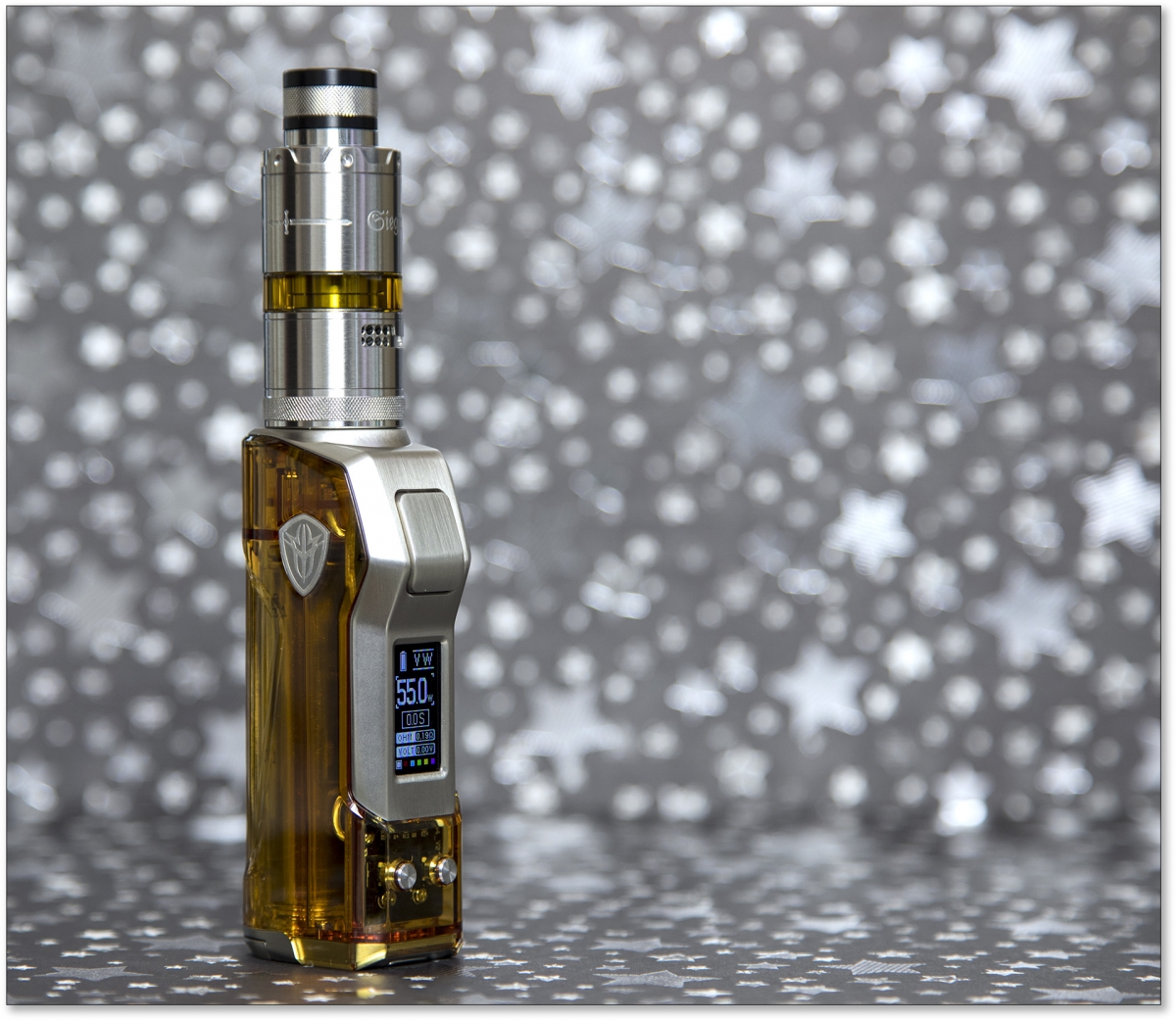 Perhaps an odd choice but it works for me, not to say other shorter tanks don’t look as good. It just suits most tanks in my opinion. 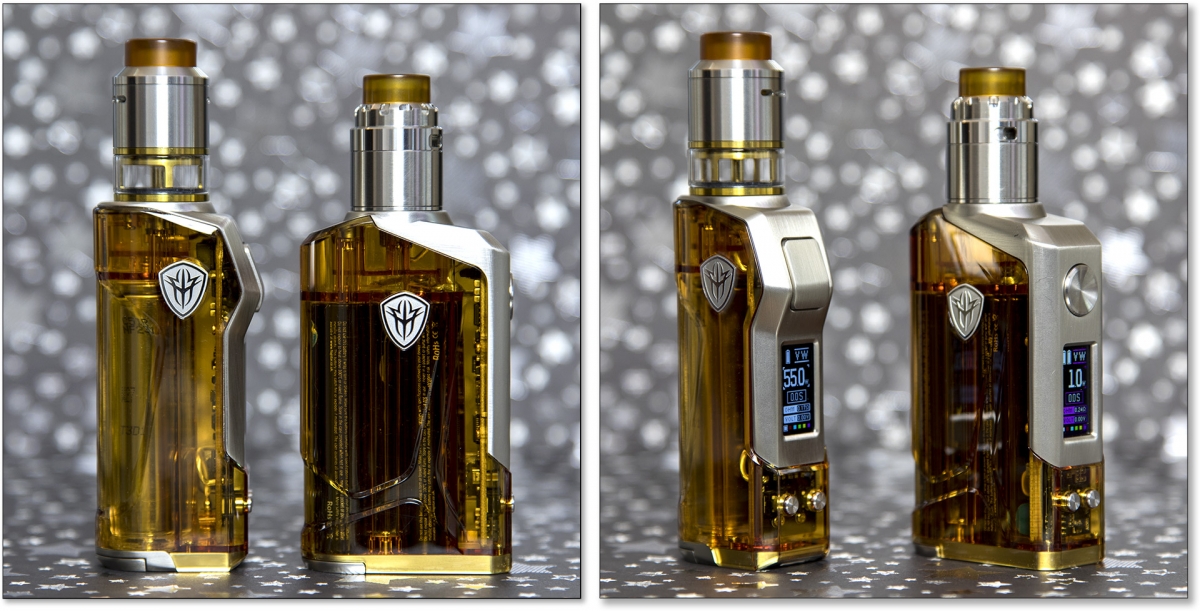 Here it is with its big brother and a couple of other atty options. Popping a Delrin drip tip on always contrasts nicely with the amber body. 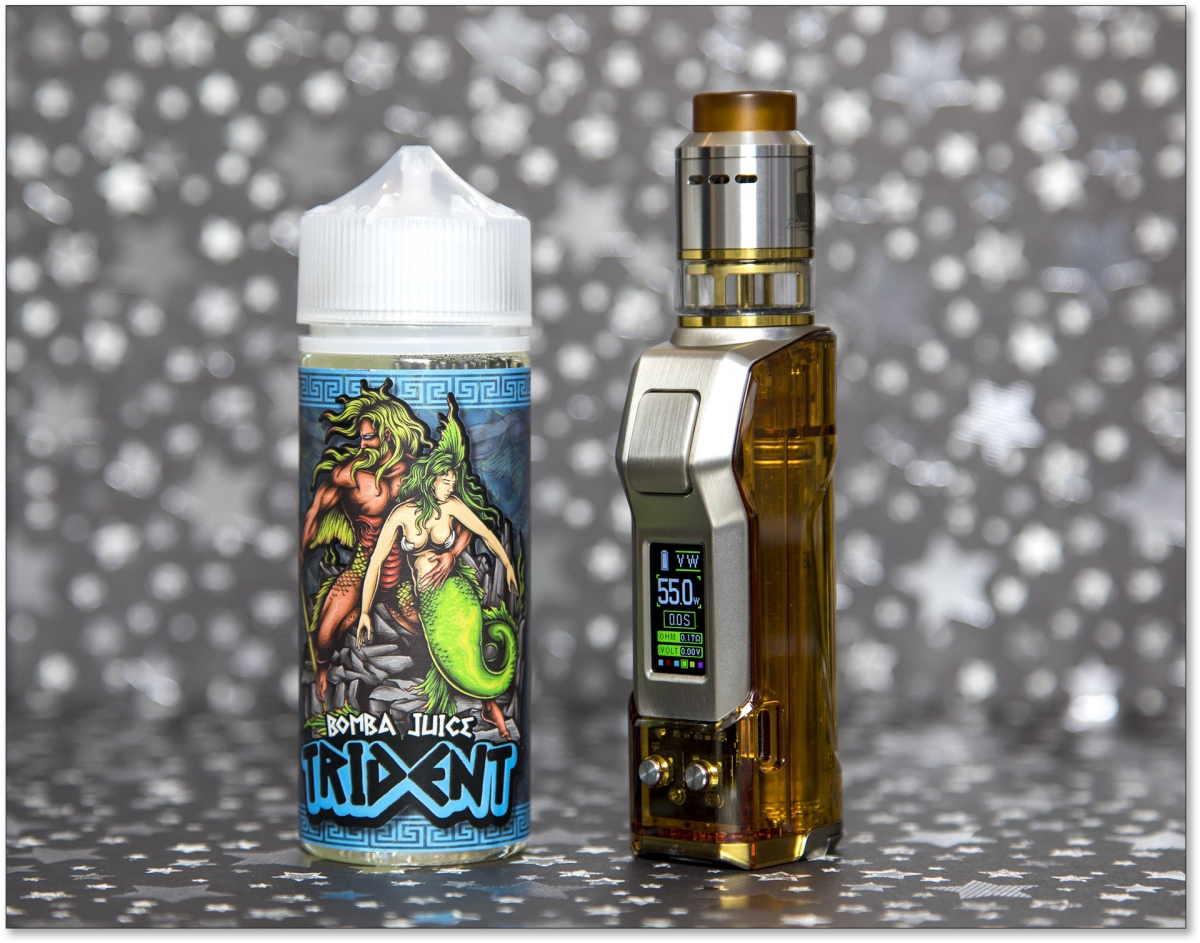 I eventually settled on the iJoy Combo RDTA (still one of my all-time favourite RDTAs), and it worked a charm on it and I really liked the whole contrast. 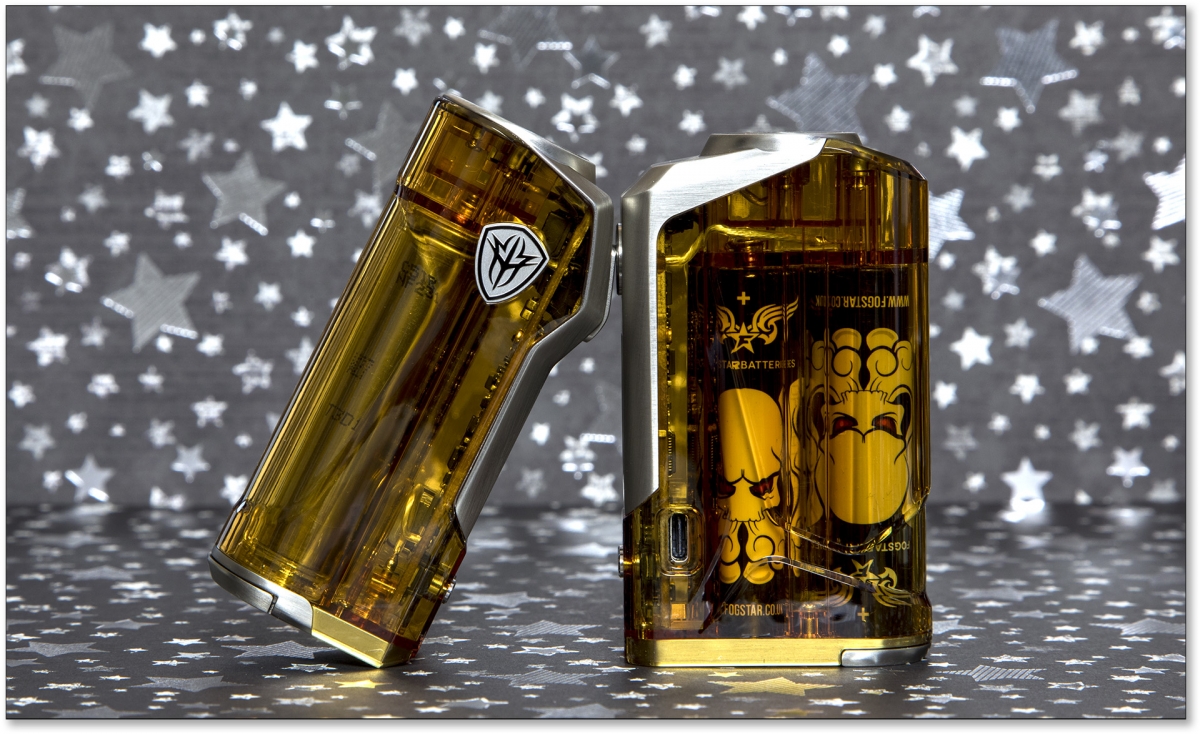 Next to the 228W dual cell version you can notice the different shape of the front and fire button. Due to it taking a 21700 battery,  naturally it had to be that little bit taller. It's only around 5mm and there’s slightly more room between the board which makes the LEDs seem brighter.

I genuinely love this mod just as much as I did with the Jellybox 228W. Sure it’s a little limited with functions, but in the real world I will only be using VW (variable wattage) and I rarely venture over 70 watts so the Jellybox Mini 80 is more than capable of performing to my needs and different enough that I’m happy to own and use both versions.

I’m not a fan of the name, but Rincoe have been subtle and haven’t plastered the name all over it, in fact it’s only engraved on the base and is very small. Once you have a battery and tank fitted, this mod looks and feel expensive, but if you check out the pricing then it’s a steal. Don’t let the LEDs put you off as you can simply turn them off if it turns you off.

In a line up with my pricey Lost Vape Drone BF, it doesn’t look out of place or cheap (though the chipset is a lot more basic). 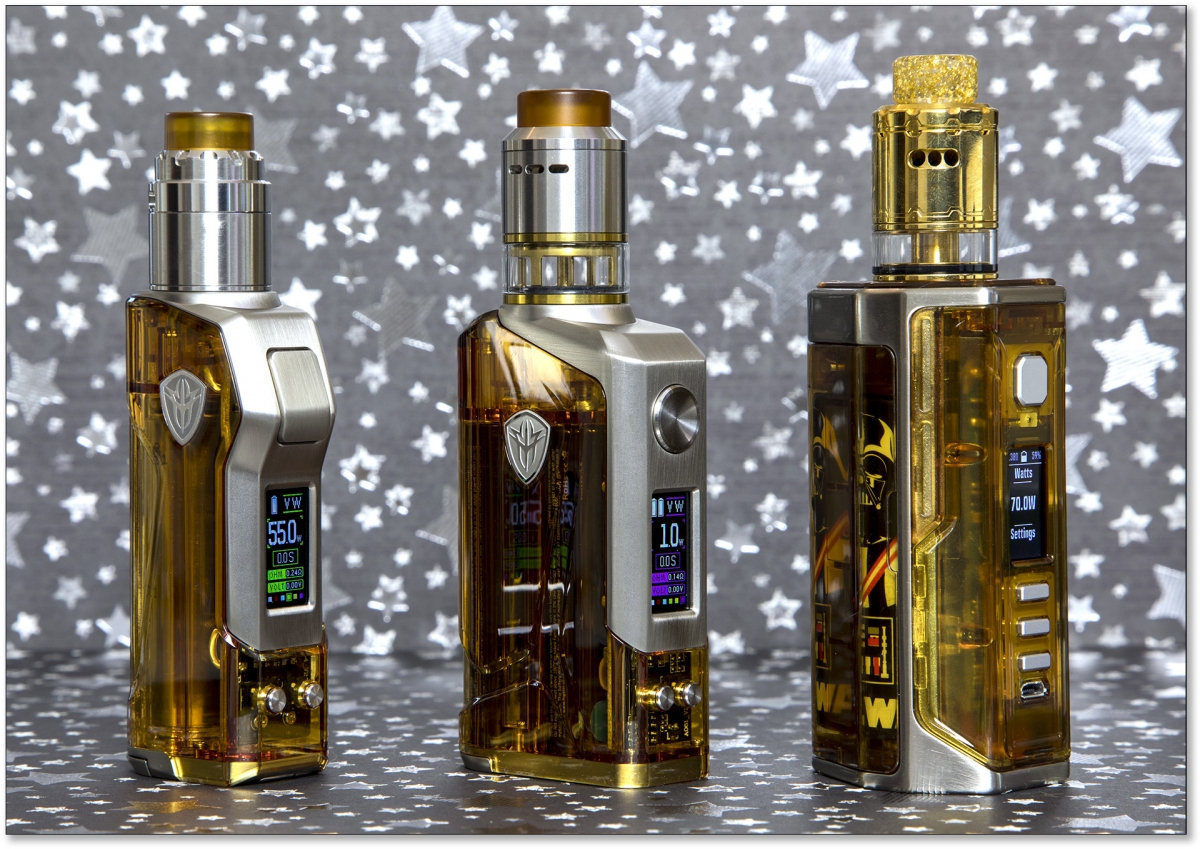 Confession – I have copied and pasted exactly the same pros and cons as the 228W version, all of it applies the same. I think either one is a smart choice depending on your needs, at this price I would bag both though. I love the look of them together in my collection.

A decent mod for less than a pod, that’s odd!

Score: 9/10
Rincoe ‘clearly’ have come up with a winner 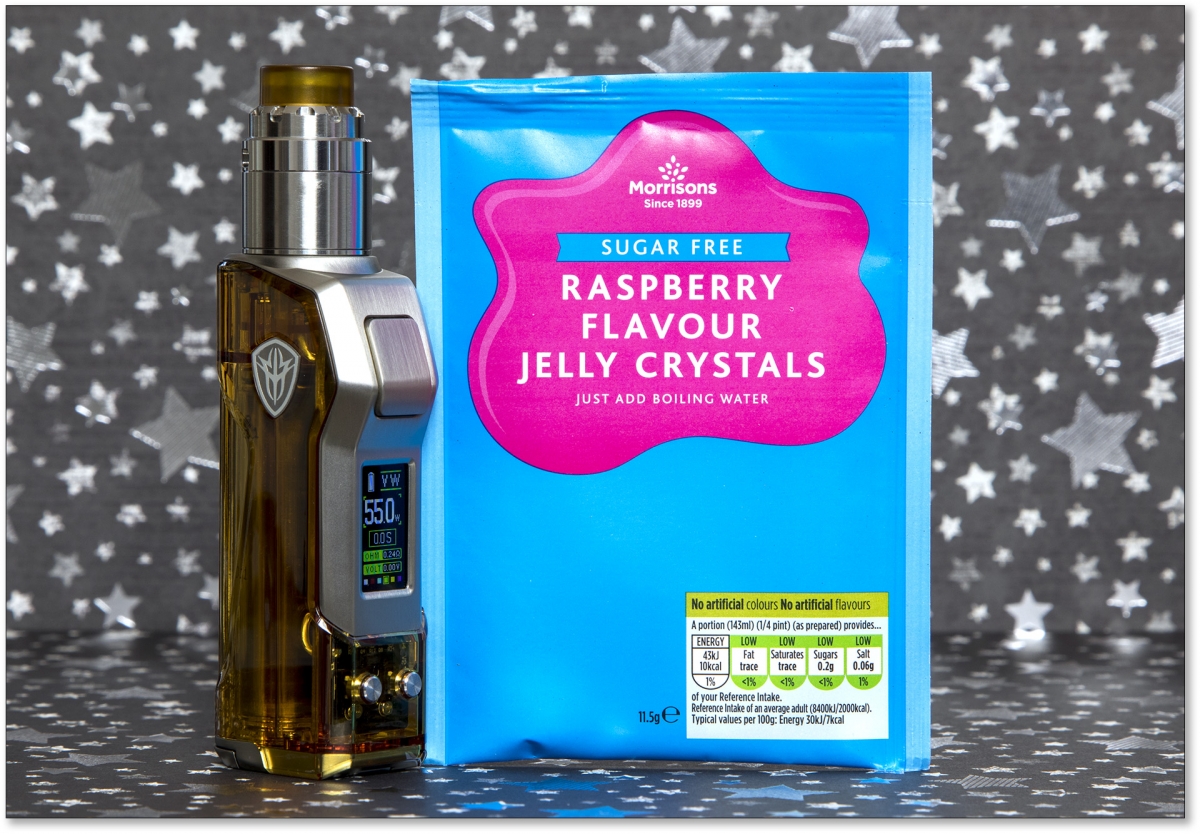 *WARNING – THIS PRODUCT CONTAINS JELLY – JELLY IS AN ADICTIVE SUBSTANCE