Sourcemore asked me if there was anything I was interested in reviewing so I put on my best cheeky grin and inquired after the Lost Vape Hyperion, a ruggedised dna100c mod, and I was more than a little surprised when they said “yes we can send that out for review”. I’d actually been anticipating the release of the Hyperion for a quite a while as it had suffered an unexpected delay due to a last minute name change, it was originally going to be called the Scutum (Latin for shield) and I don’t think it takes too much imagination to guess what it was being called on social media within hours of its announcement... I bet someone at Lost Vape thought “we’ve dropped a bollock here lads!” 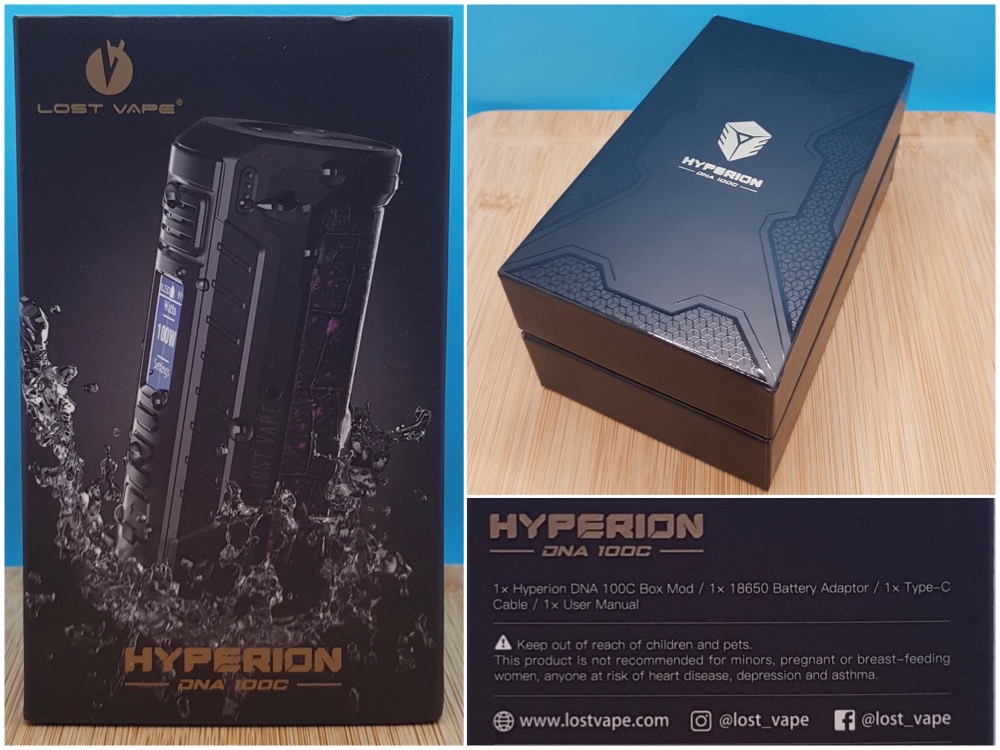 The Lost Vape Hyperion comes with a picture of the device in your chosen colour on the outer sleeve, I was sent the “red splatter” version for review. Once you remove the outer sleeve, the presentation suddenly becomes a bit more upmarket with a lovely Hyperion branded design on the lid and gold trim around the sides of the box. 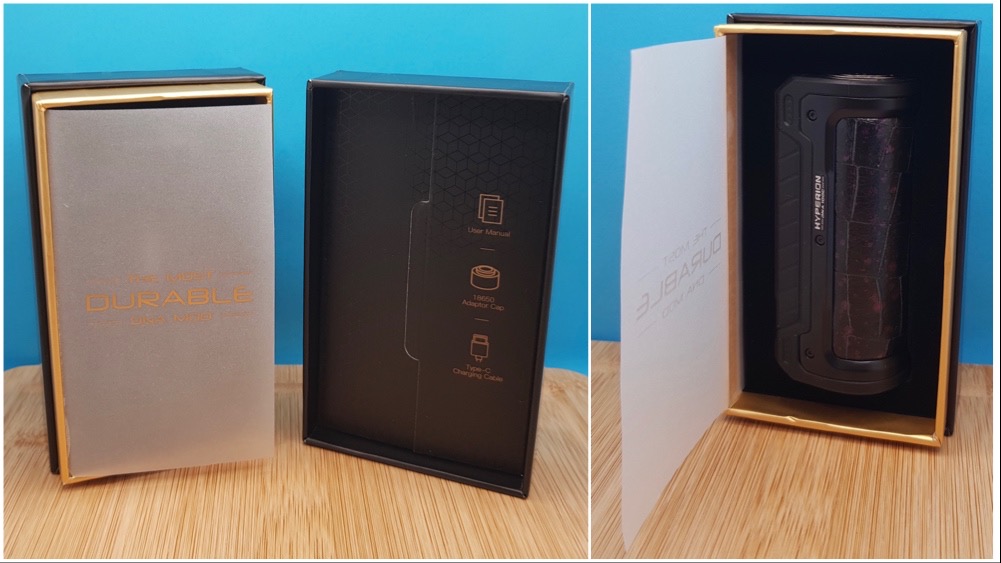 The sleek presentation continues inside the box as well with the Hyperion hidden under a semi-transparent layer with “The most durable dna mod” embossed in gold on the front, and the extras (user manual, 18650 battery adapter, and USB-C cable) hidden in a compartment built into the lid. Top marks for initial presentation. 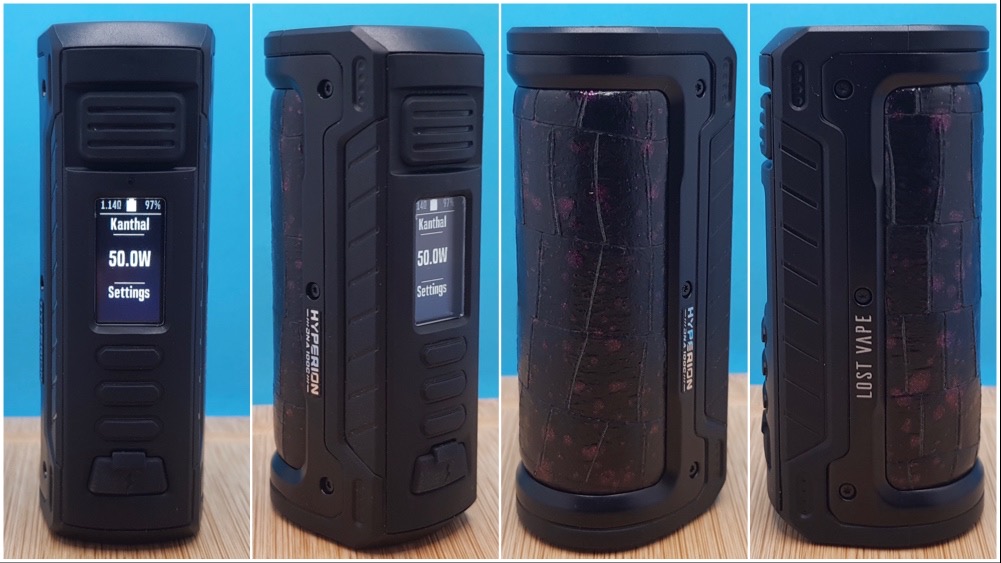 The Hyperion has an ip68 rating which means it’s completely dust tight, water resistant (immersed up to 1 meter for up to 60 minutes), and shock resistant against drops and falls, this is slightly higher than the ip67 rating we normally see on these rugged devices so it should live up to the claim of being “the most durable dna mod”. As is common for the ip rated devices, the whole chassis is encased in a liquid silicone rubber covering all the likely entry points for liquid like the buttons and usb port. Even with this thick rubber coating, all the buttons have a nice tactile feedback. I particularly like the cut-out design on the oversized fire button as this makes it very easy to locate with your fingers.

There’s a cushioned leather grip running around the back and sides which is held in place by a metal c-frame with “Lost Vape” and “Hyperion” logos on opposite sides. In my case this is the “red splatter” version, in reality this is a dark leather patch with pink/purple splatter, this doesn’t show up that much in artificial lighting but it’s definitely more noticeable in natural sunlight as the splatter has a high gloss almost glittery finish. I’ll admit that this probably wouldn’t have been my first choice, but it has actually grown on me over the course of the week, a few more sober options like carbon fibre and calf leather are available if you’re not too keen on the splatter versions.

This is all fairly hefty weighing in at 150 grams without a battery, and size wise it’s very similar to the equivalent Geek Vape Aegis Max, from my own collection this is almost the same size as my old Hotcig DX75 (Dna75) mod. The DX75 was a firm favourite of mine in the past but it’s been largely left on the shelf these days because it uses 26650 batteries which have similar capacity to modern 21700 batteries, but they suffer from absolutely terrible battery sag which renders them practically useless for anything other than low wattage mouth to lung vaping, so I’m happy for the upgrade to a modern board and battery here. 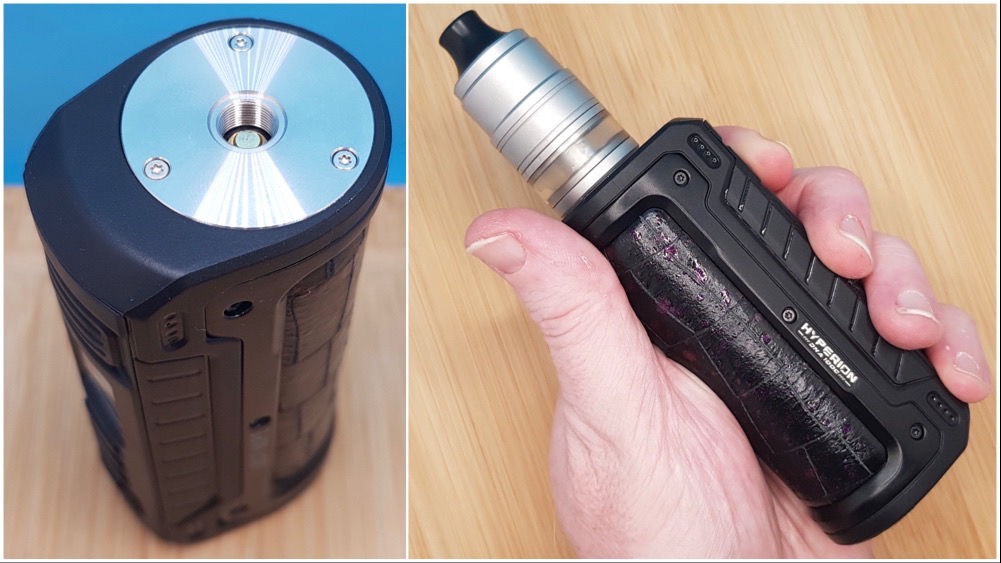 The top of the Hyperion is dominated by a massive 510 plate, this is 29.5mm across and there’s still a couple of millimetres around the outside of this as well so massive tanks and RDAs shouldn’t present a problem. Whether you have adequate power for this type of atomiser with a single 21700 is up for debate though. It doesn’t look too unbalanced with 24 or 25mm atties, but if you drop down to a 22mm atomiser it can start to look a bit odd. 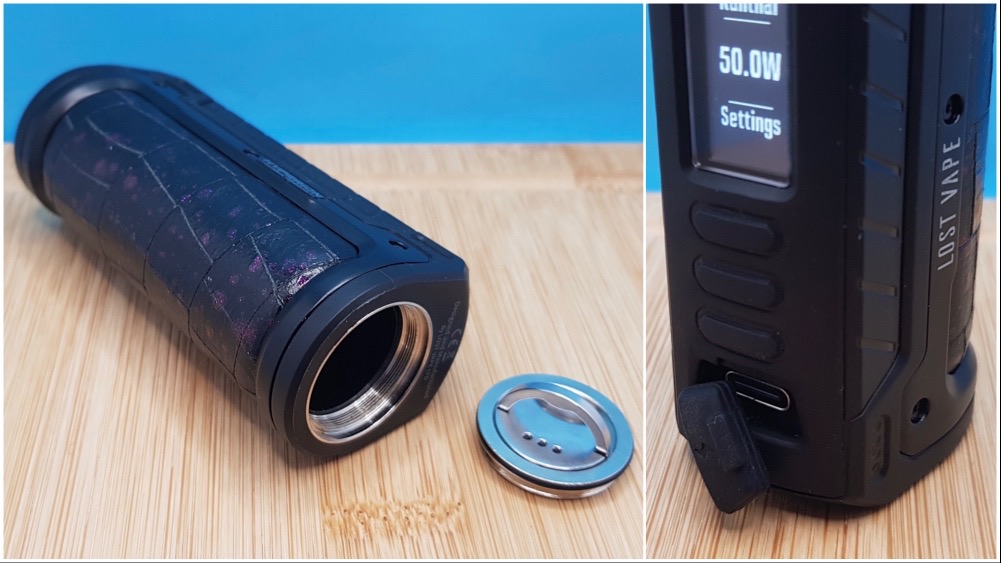 Batteries are inserted from the bottom with a screw cap, polarity is clearly marked on the battery cap itself and the spring-loaded positive contact at the bottom of the battery tube. The cap itself has a rubber membrane inside which is designed to prevent water ingress in normal use but will break should you be unfortunate enough to vent a battery, there’s also an O-ring on the outside to help create a watertight seal and this does make it difficult to screw the cap down, but this has eased off a little with use. The Hyperion passed both of my oversized battery tests so you should have no difficulty with any of your 21700s here.

The USB port has finally been upgraded to a USB-C connector on this all new DNA 100c board and this is hidden behind a rubber seal on the front plate. This is easy to open and close and doesn’t obstruct the USB port in use either which is something I’ve experienced with some of the other ip rated mods I’ve looked at recently. This promises up to 3 amp charging but the Hyperion ships with the stock DNA 100c firmware settings so it’s locked to a much more sensible 1.4 amps out of the box. If you want the full 3 amps charging capability, you’ll need to download evolv’s Escribe software and activate that yourself, whilst I’d trust the on board charging on a DNA mod more than most other brands, I’m not sure I’d want to do this myself.

One of the beauties of the DNA boards is the ability to tinker like this, should you wish to do so. This is less necessary since the introduction of the “c” series boards as they perform very well anyway straight out of the box and are easy to use and navigate unlike the earlier non-colour dna boards that you needed a master's degree to use. The DNA boards are still the acknowledged market leaders when it comes to temperature control, and features the superb replay feature (Temperature control for dummies). This is still a very competent and powerful chipset if you’re a wattage only vaper as well with reliable performance.

Another great design from the boffins over at Lost Vape, the Hyperion brings things up to date with the new DNA 100c and 21700 battery combination, plus it wraps it all up in a durable ip68 rated shell which means even if you’re a bit rough with your mods, it should stand the test of time. It’s a bit hefty, especially with a battery and atty, which isn’t uncommon in these more durable mods, but it’s still very comfortable to use, and I for one like the rugged appearance and use of materials. It’s nice to see DNA boards starting to make a bit of a comeback in mainstream mods as well.

As you might expect from a DNA-c board, performance has also been outstanding, the extra 25 watt headroom and upgraded USB-C port over the earlier DNA 75c boards are both very welcome additions. Whilst I’m mainly a wattage vaper these days, the DNA Replay feature is still a market leader should you want to try out temperature controlled vaping, and it takes all the hassle and complication out of the equation, so I’d encourage you to give that a go if you’ve never tried it. 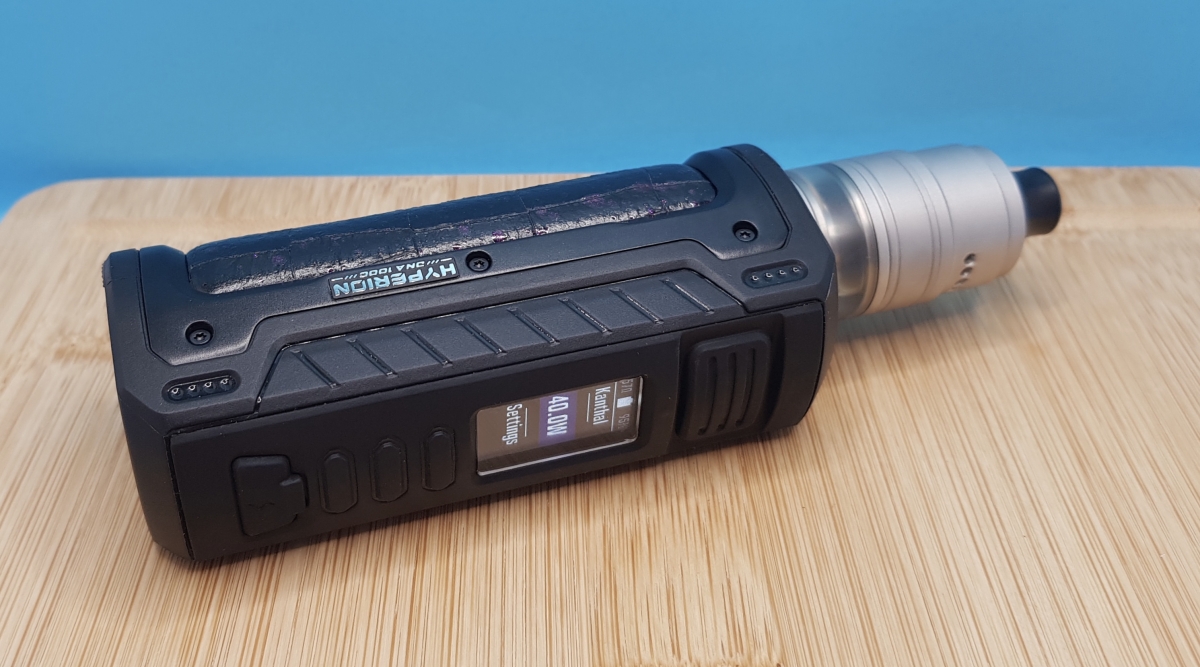