The Oaker kit was a bit of a mystery offering to review, there was no info at all about it other than it was Kizoku and MTL so that was enough for me to pounce on it like a tramp on chips! 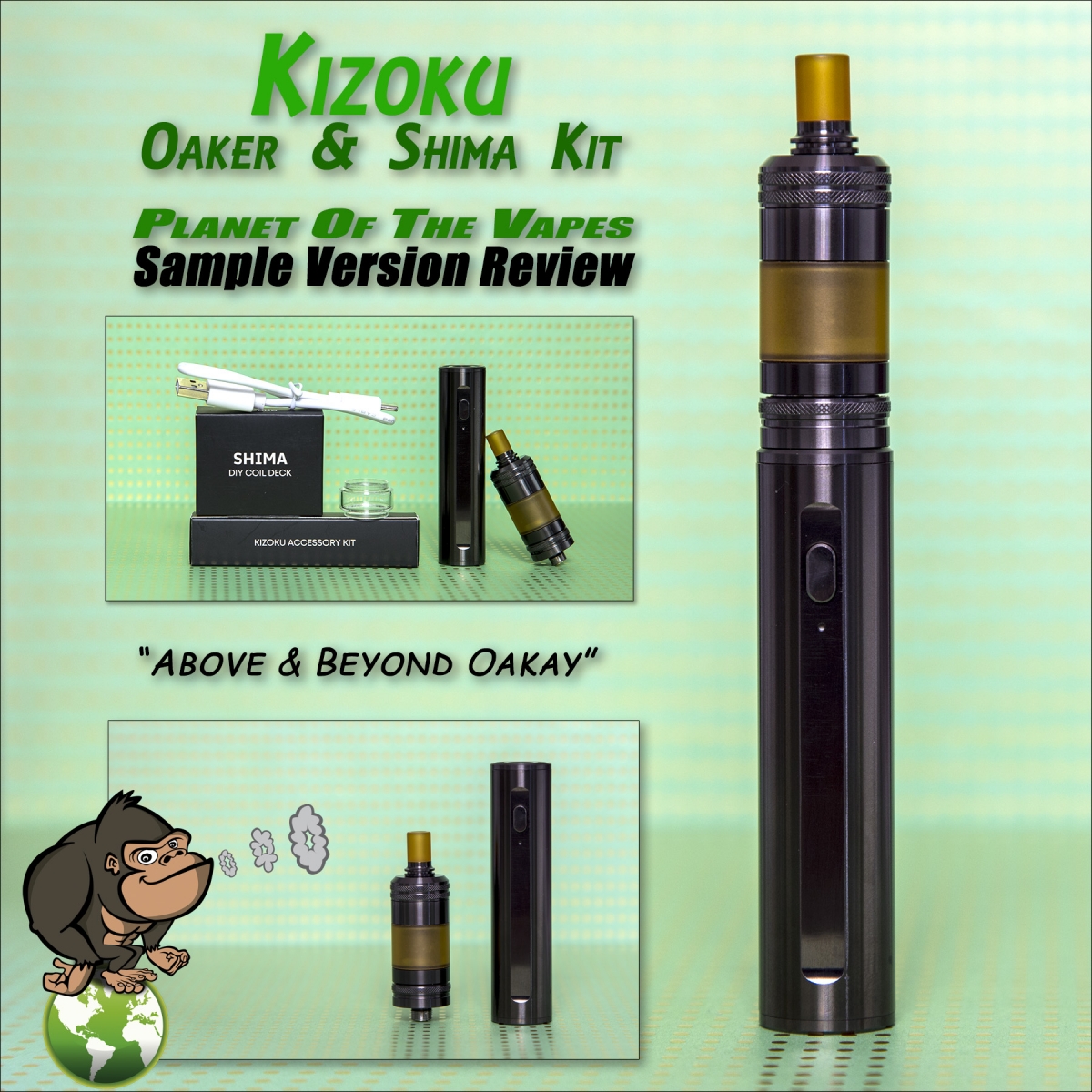 I don’t have the usual specs and bumf as, at the time of writing, there are no web pages with the details so I will just cover what I can, this was all we had to work with: 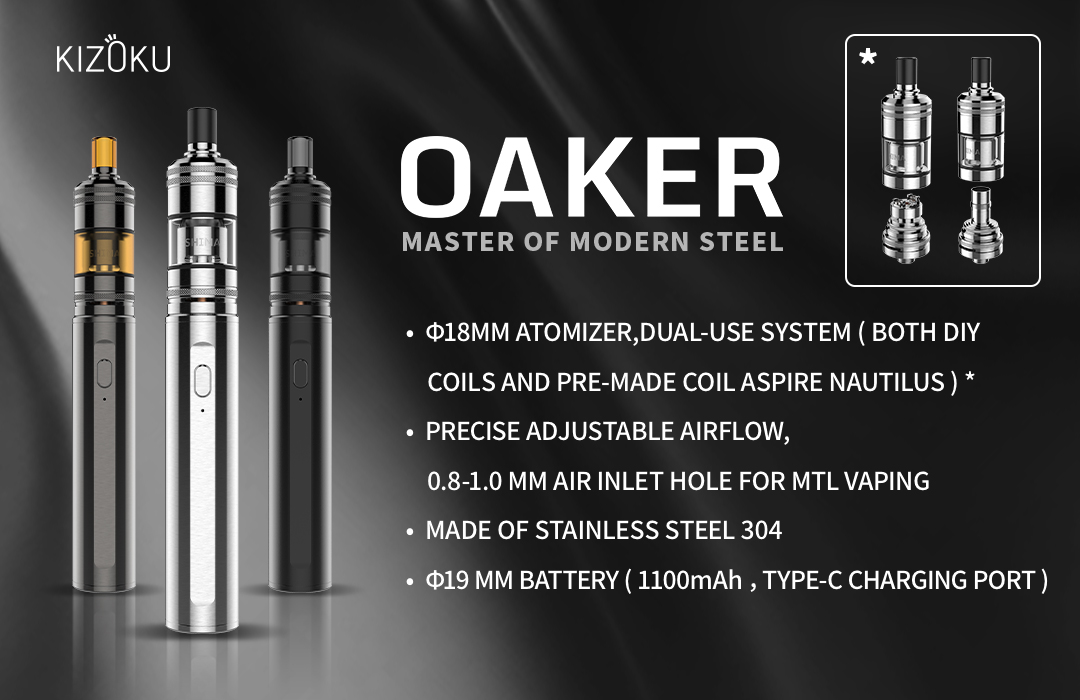 Though I did manage to hunt down some further info: 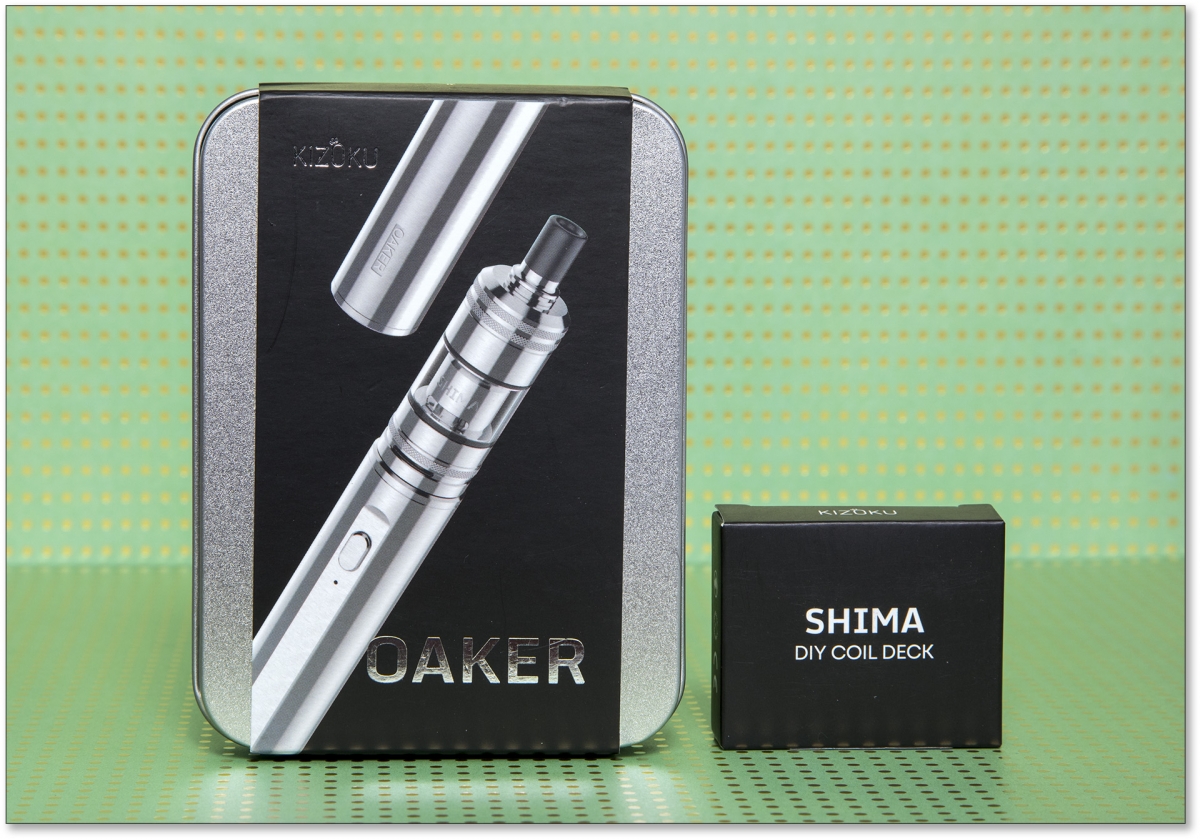 Since this is the SAMPLE version, you should expect the final version to be different, for example the RBA (DIY coil deck) came in a separate box with mine as the tin wouldn’t fit it all in as is. 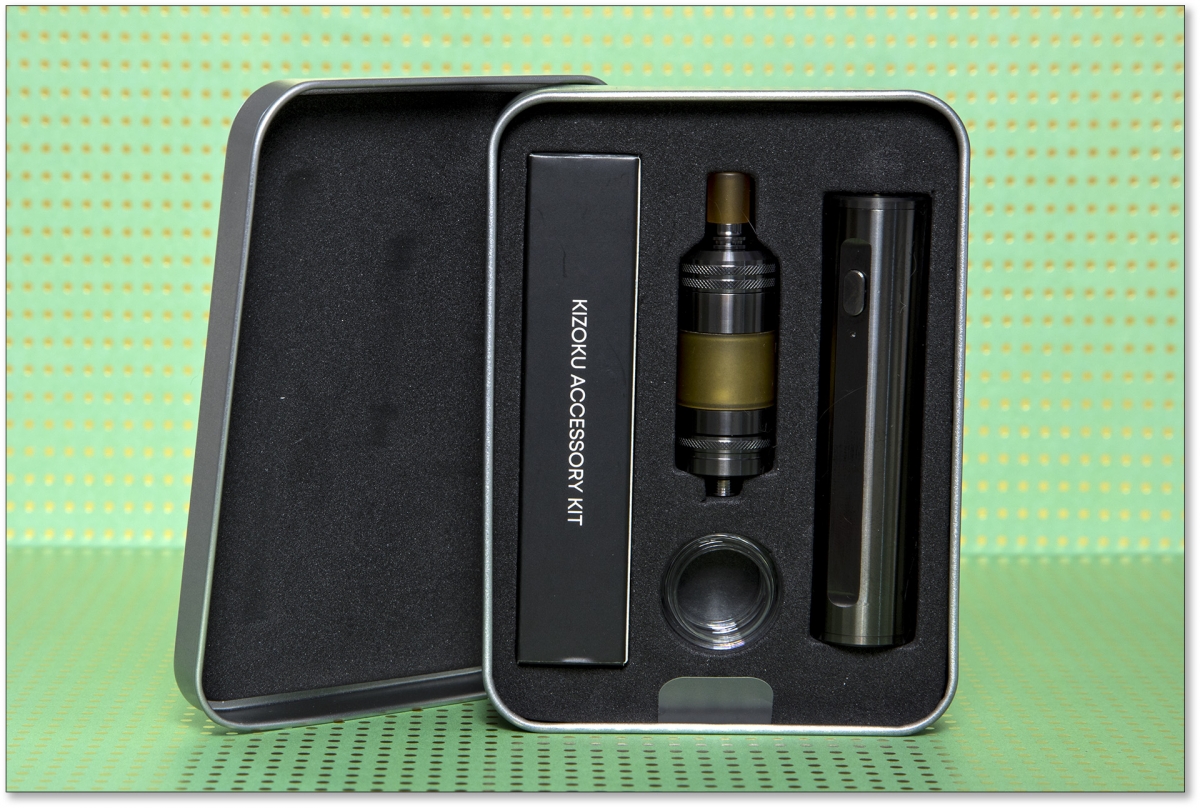 Since I have no clue how the final kit will be packaged I won’t go into too much detail, but if they do manage to redesign the tin to fit the RBA in, then that’s a good thing as the tin will come in handy for other storage purposes – I’m a big fan of upcycling compared to recycling. 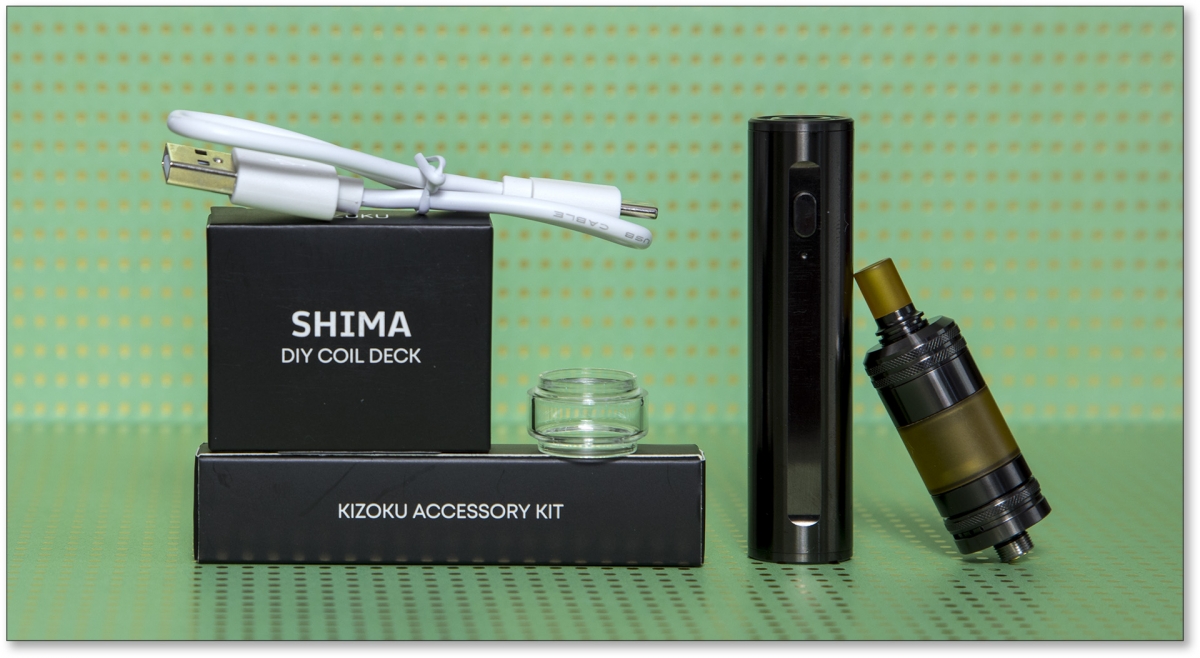 As it stands, the ‘KIZOKU ACCESSORY KIT’ box will only fit the USB-C cable. However they end up packaging it, you should expect the following:

I love that Kizoku design their tanks to be dual purpose and use commonly available Aspire Nautilus coils, though the included 0.7Ω coil was Kizoku branded.

I was hoping for the SS colour version but received the Gunmetal one, one of my pet hates is the frozen urine coloured ultem tube and drip tip but I will put my bias aside for the review and pretend that I love wee coloured tanks. 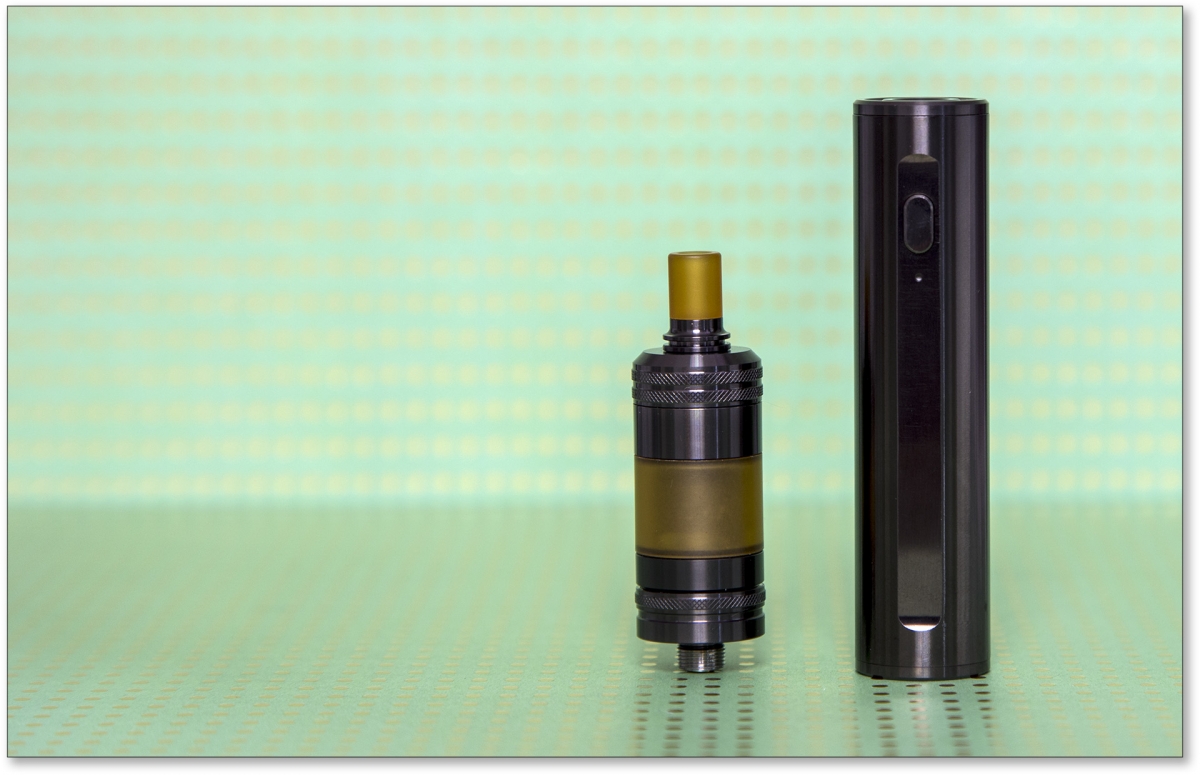 I really liked the minimal styling of the kit though. The Shima is quite tall for an 18mm diameter tank but then the Nautilus coils are quite tall. It’s a shame the tank doesn’t have a glass section though as it looks pretty good inside, oddly the Oaker is 19mm diameter which I initially thought would look plain wrong, but actually it blends well.

The new Shima tank has a bit more style to it, mostly due to the knurling which is ideal and very intricate. 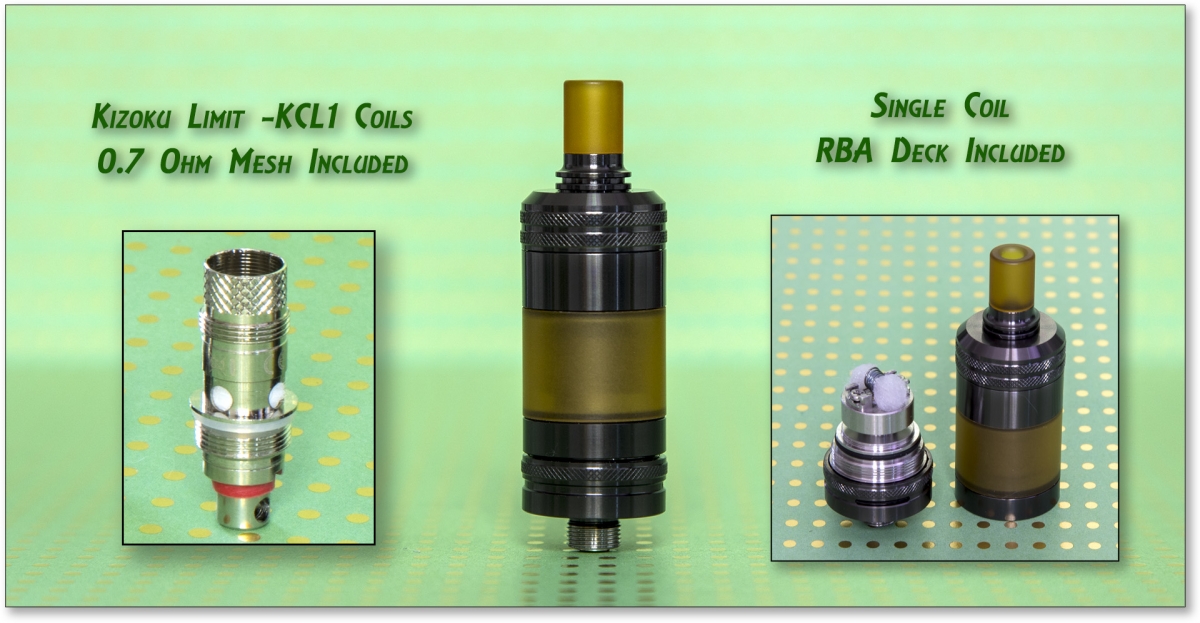 As previously mentioned, the tank takes stock coils or DIY coils. As it turns out, both were excellent. I will go into more detail later but stripping it down into its components was nice and easy, simply unscrew everything counter-clockwise.

The top fill cap is threaded and buttery smooth to unscrew, one of the best I have tried. The two kidney shaped fill ports are large enough for most bottle nozzles.

If you aren’t interested in the RBA then you won’t be disappointed with the Shima as a stock coil tank, fitting the coils is simple enough but more of a traditional screw in style rather than the plug-n-play of recent tanks.

Go with the flow

The airflow control of the Shima tank is superb! It has a ratchet style click in place dial which works a charm. Not only do you get exact locations to the various hole sizes, but it clicks and stays in place perfectly. Also (and something I personally found useful) you can easily dial in the options without looking at the airflow. It even goes to a wide slot for a restrictive DL, although it is still a bit tight. For MTL, the airflow is easily one of the best I’ve tried, from a cheek pulling tight draw up to a satisfying looser draw which is still tight enough to call MTL.

It gets even tighter with the RBA option, which was even more pleasing. Kizoku know how to do MTL for sure.

For me, I love rebuildables and having this option included in the kit is a big pro. Despite it only being 18mm diameter and a small build deck, I still found it very easy to build and wick. 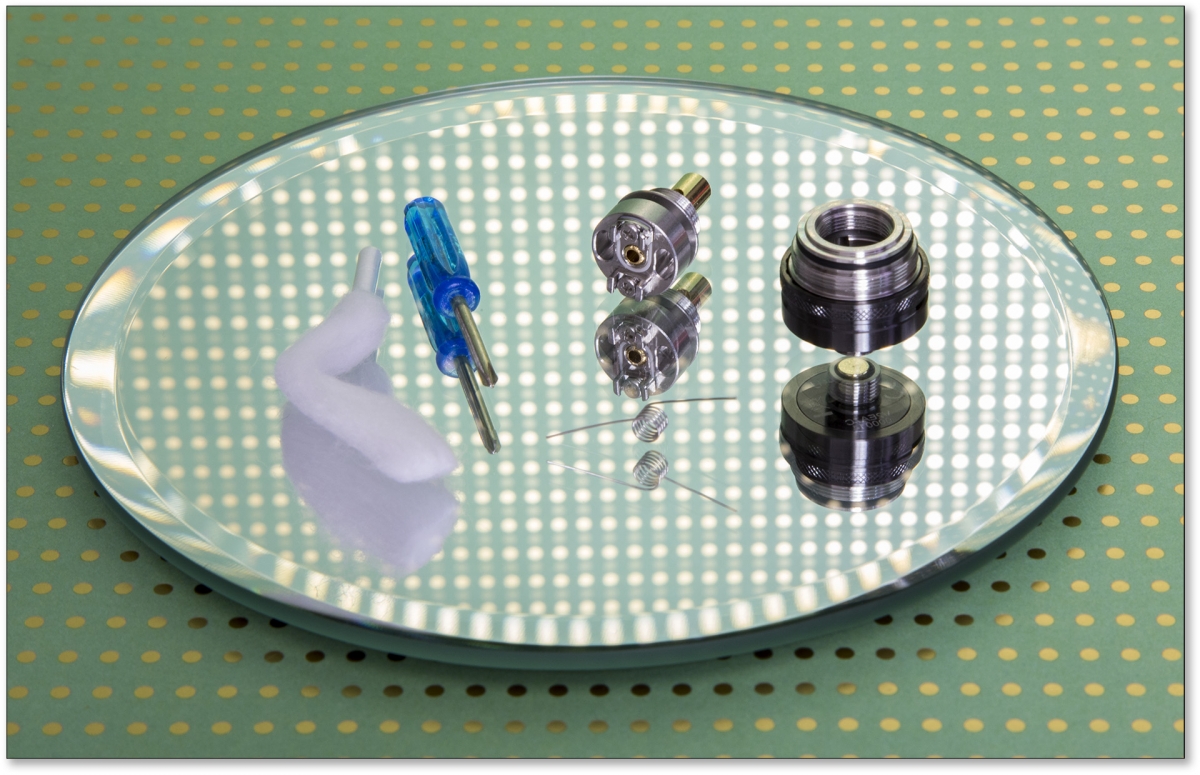 The included coil I assume is Kanthal, but oddly it was a 3mm inside diameter which was a surprise for such a small deck but it fitted easily. Normally I would go with a 2.5mm coil, but I decided to use the included one. 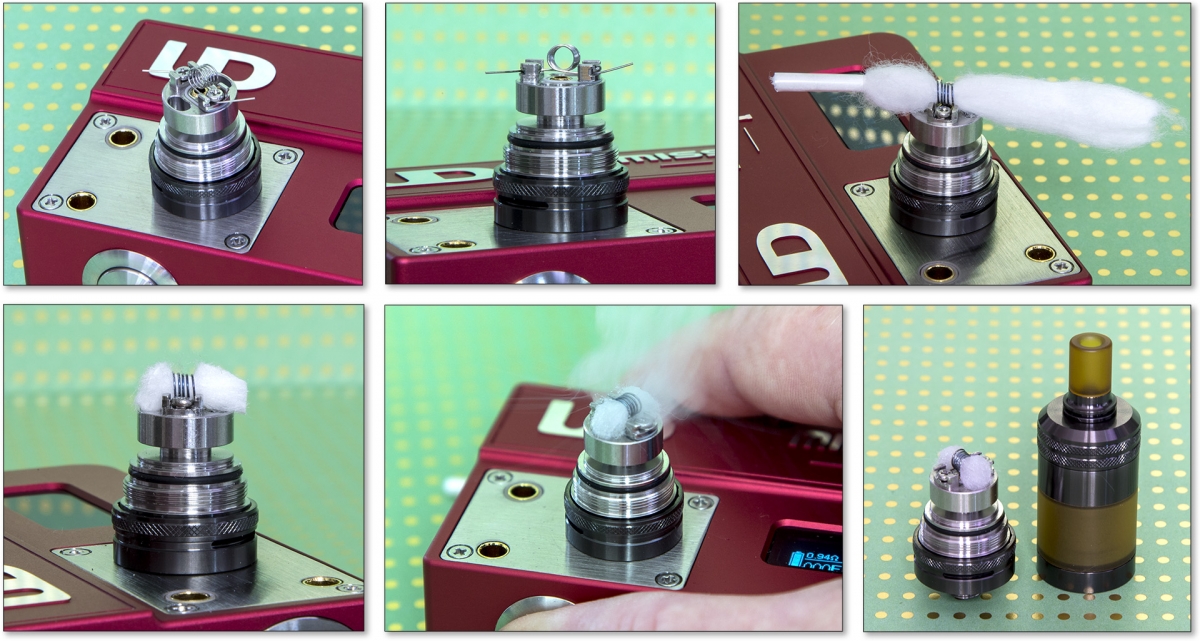 The deck is a screw clamp style which I’m not usually a fan of, also the coil was wound the wrong way for this style of deck so I was expecting it to be fiddly, but this was not the case at all. In fact it was very easy to fit, and screwing it down didn’t distort the coil as I would have expected. This is a credit to how well Kizoku designed the tolerances of this deck, it has a high end factor to it.

Wicking was slightly tricky due to it being 3mm which meant there was too much wick to fit into the wicking ports. Rather than thinning the ends, I simply trimmed off the top corners. The key is not to over stuff the channels so the leg lengths only need to be short enough to poke into the ports.

With a 2.5mm build, I doubt you would need to trim the wick at all. Overall I enjoyed building and wicking this deck. I primed it up by saturating the wick and pulsing the power until the legs were soaked.

This kit is simplicity and frozen-piss easy to operate:

That’s all you need to know. There are various safety features built in of which I am too lazy to list.

I started with the 0.7Ω mesh stock coil at medium power (3.3V) and the MTL vape was bloody lovely! Easily rivalling my favourite pods for flavour, but it was the airflow that made it better. On the smallest hole it was a nice tight draw and, despite hating the urine coloured drip tip, it was perfect for this tank and the narrow bore helped deliver a really smooth vape.

There seems to be a trend in manufacturers going sub-ohm with MTL pods, for good reason as the vape delivers a more intense flavour. But for me it’s not quite what I want from a MTL setup as the juice consumption and vapour production is too high for me.

Thankfully the RBA was exactly my cup of tea and personally I feel this is where the new Shima tank shines. The airflow is tighter and I cannot fault the flavour. The coil came out around 1.0Ω, and on medium power I was really enjoying it. With the smallest airflow hole selected and dropping the power to Low (RED), I enjoyed it even more. In fact I was loving it and couldn’t put it down, this will be my choice between stock coil or RBA, naturally battery life improved in this configuration also.

Well not quite, though mostly these are personal niggles. The first one is the spare 3ml glass, I really wanted 3ml and I really wanted glass but it looks fugly on this kit, the dimensions simply don’t add up. 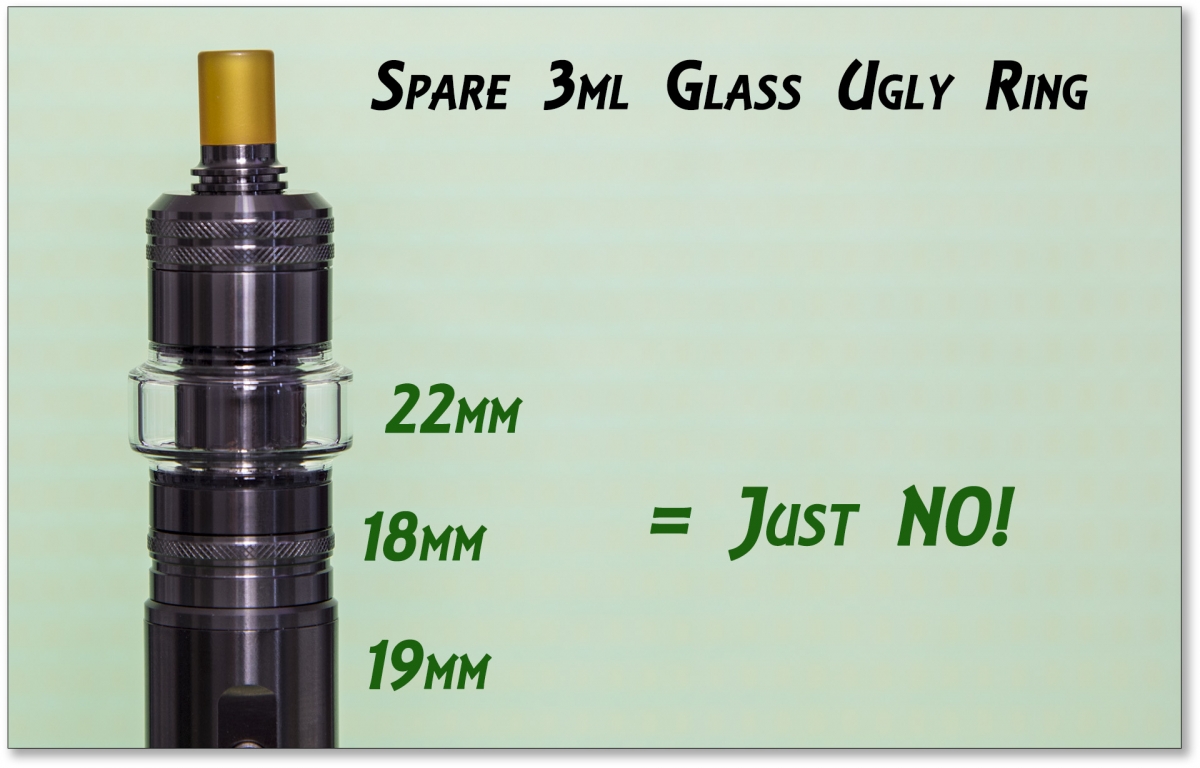 I really wish they had included a plain 2ml glass section instead. I could live with only 2ml capacity. To be fair most of my favourite MTL tanks are only 2ml anyway and I’m fine with that, juice lasts long enough when you’re vaping over 1Ohm that the capacity isn’t really an issue.

My other niggle is purely personal, my pet hate of ultem aka urine coloured. It just reminds me of stinky smoke stains and looks grotty. This spoiled the kit for me, if it had glass and a clear drip tip I would have been over the moon with it.

That said, you don’t have to choose this option, the SS (Silver) would eliminate my niggles completely and indeed the Black also looks good.

But here’s the thing, when I received the Oaker kit and discovered it wasn’t my colour choice I swore I would just review it then give it away. As it turns out, I don’t care about the ultem since the vape is so damn good. I did swap the drip tip but soon found myself putting the original one back on as it was that good.

I’m going to keep this simple:
If you are a MTL user and one of the colour options appeals to you, then I am certain you will love this superb little kit. It is right up there with the very best in my MTL collection.

The 18mm/19mm imbalance actually works on this kit, I’m usually so OCD about this but it looks just right and is part of its charm.

It even beats the Kizoku Limit in RBA configuration in my opinion, which was quite a surprise for me. It can only be the airflow design and size that’s making a difference and nothing that I can spot that’s innovative, it just works. 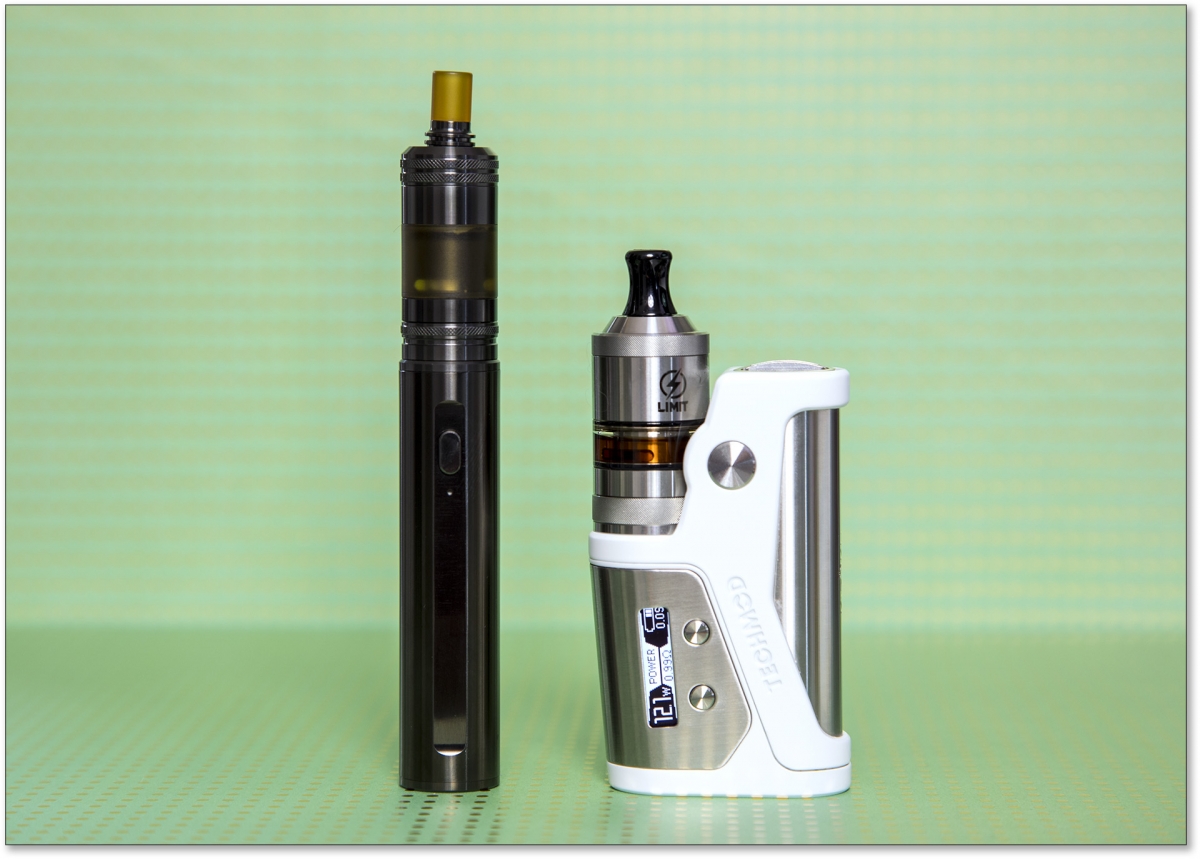 I guess the main downside is that the Oaker looks boring, especially next to the design classic of the Techmod where Kizoku dared to be different. But as a simple stick kit, it’s not ugly either. Generally I like the look of it but it is not one of those eye candy vapes.

Though it’s not as daring in looks as I would have hoped from Kizoku, it doesn’t matter one bit as this kit is easily one of the best MTL kits I’ve tried. The Shima tank and RBA is the jewel in the crown for sure. This time last year I had never heard of Kizoku, but now they are firmly on my radar and I can’t wait to see what they come up with next (MTL wise).