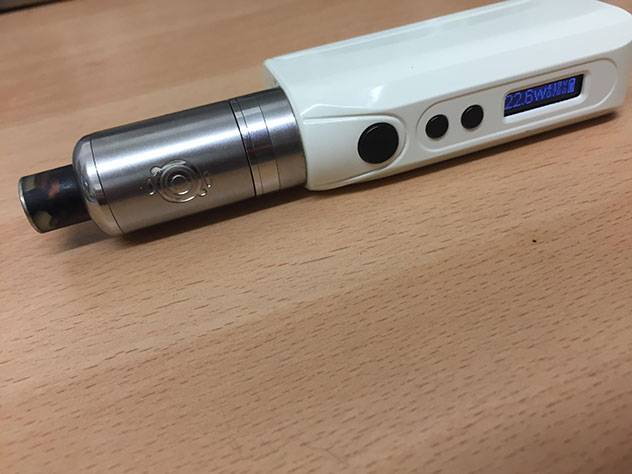 The IPV D2 was a stellar release from Pioneer4You and due to its small form factor, cheap price and great features it quickly became one of the top selling releases from Pioneer4You. I myself was a big fan and purchased a couple of these that I still use to this day! However there were grumbles from some users about the lack of voltage step down, and a certain issue that I myself experienced which was that the paint finish scratched away quite easily from the unit.

Pioneer4You have moved swiftly to rectify these issues, with the release of the IPV D3, sporting a new scratch resistant paint finish, voltage step down (to be confirmed for final release), magnetic battery door cover, 80w of output power and 75J of output power in Joule (temperature control) mode. It’s also a little bigger than the IPV D2, but still retains that excellent form factor.

I must make you aware that the IPV D3 unit I received for review is a test version generously sent to me by Ash at Myepack, and as such does not represent the finished retail version due for release shortly. I will update the review in due course when I get my hands on the finished article!

I received a test version of the IPV D3 which means the box contents below are subject to change. Inside the package contents of the test version I received:

It’s slightly bigger than the IPV D2, with measurements of 27mm x 95mm x 48mm and a weight of 180g (excluding the battery). Holding the IPV D2 and D3 in your hand however, you would really struggle to notice. It’s still a beautifully small unit that sits in hand perfectly, and retains the spring loaded 510 connector to ensure there is no gap between your mod and atomiser. The spring loaded 510 connector hasn’t struggled with any atomiser I have used with it, each and every one threaded in smoothly with no gaps.

The scratch prone paint finish that was present on the IPV D2 has gone, and a lovely scratch resistant paint finish is present on the IPV D3 unit I received for review. I’ve been carrying this around with me everywhere for the past week and a half, and the finish hasn’t picked up a single scratch, and I’ve inspected it closely! The IPV D3 is set for release in white and black colours, with other paint finishes still to be confirmed. 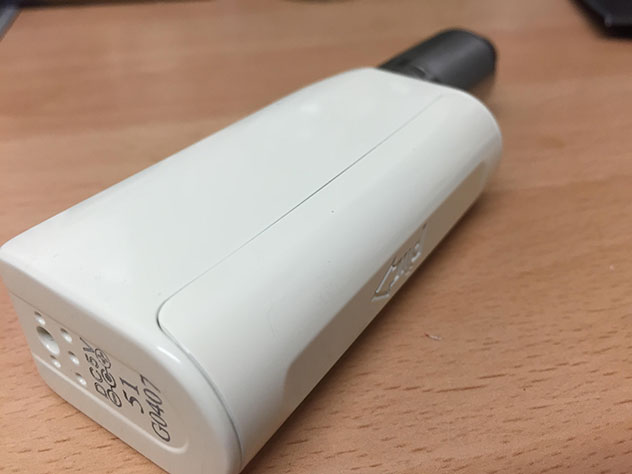 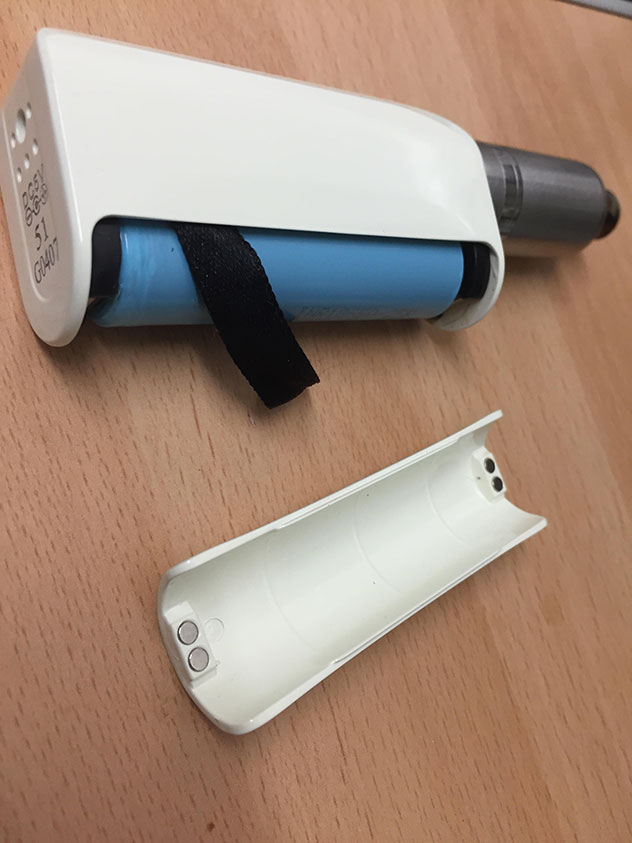 Again as per the IPV D2 the buttons are excellent, fast and responsive, and I haven’t once had one get stuck. The screen layout is the same as the IPV D2 however the screen seems even brighter to me, I’ve not struggled to see what is displayed on the OLED screen in any light condition.

All in all, the IPV D3 is a really smart looking little unit. Very impressed with the looks and form factor!

The IPV D3 I received for review is running on a modified version of the SX130H chip that was present in the IPV D2, and as such some features are subject to change. The menu system present on my IPV D3 unit was exactly the same as the one present on the IPV D2, 5 button clicks whilst the unit is on accesses the menu system, whereby you can switch the device off, switch between power and joule (temperature control) mode, adjust the temperature limit, switch between selecting whether you are using an Ni200 or Titanium coil and also adjust the temperature display from celsius to fahrenheit.

Temperature control is activated through the menu system, and it works in the same way as the IPV D2. Select whether you are using a Titanium or Nickel (Ni200) coil and set your desired temperature limit, exit the menu and when the IPV D3 and your atomiser are at room temperature, hold down the up and down buttons to set a baseline resistance. You can adjust the power by holding up or down.

In wattage mode, the IPV D3 performs just as well as the IPV D2 did - no bad thing when I considered that the IPV D2 performed superbly well, with accurate power output at voltages over 3.8v and great battery life. You have an extra 5w in power mode to take advantage of as well as well as the added benefit of the IPV D3 being able to fire coils down to 0.1ohm, meaning that pretty much anything will be compatible with the IPV D3. Overall, it’s been a solid little performer for me, I’ve taken it out the house with me every single day since receiving it and it hasn’t let me down. Using it at 20-30w has given me an entire days' worth of vaping from a Sony VTC5 battery, and I’ve only needed to put my battery on charge at the end of the day. If step down is included with the finished retail version, then hopefully you should have accurate power output no matter what resistance and power level is selected. 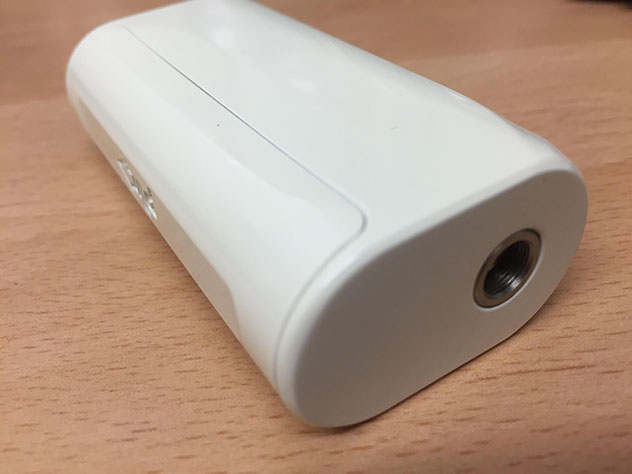 Temperature control mode on my IPV D3 unit was exactly the same as the IPV D2, the finished article is due to have 75J of output power in Joule mode and support for coil resistance down to 0.05ohm, however my test version only had an output power of 50J, as per the IPV D2. After testing atomisers such as the Freemax Starre Pro with an Ni200 coil and Heron V2 with a Titanium coil side by side with the IPV D2, it perfomed exactly as the IPV D2 did, which is no bad thing. I will update the review with how temperature control performs with the finished retail version once I get hold of it, as the extra 25J taking the maximum output up to 75J can make all the difference, certainly with Titanium coil builds.

A bug bear for many users of the IPV D2 was that the IPV D2 did not have voltage step down included. My test version does not either, however subject to change Pioneer4You state that voltage step down will be included with the final retail version of the IPV D3, which means that you can achieve a true voltage output when running the voltage below the current battery voltage, and benefit from a longer battery life as well. Despite voltage step down not being included with my release, I did still seem to get slightly longer battery life from the IPV D3 over the IPV D2, so you could potentially be looking at an extra hour or so with the finished retail version. 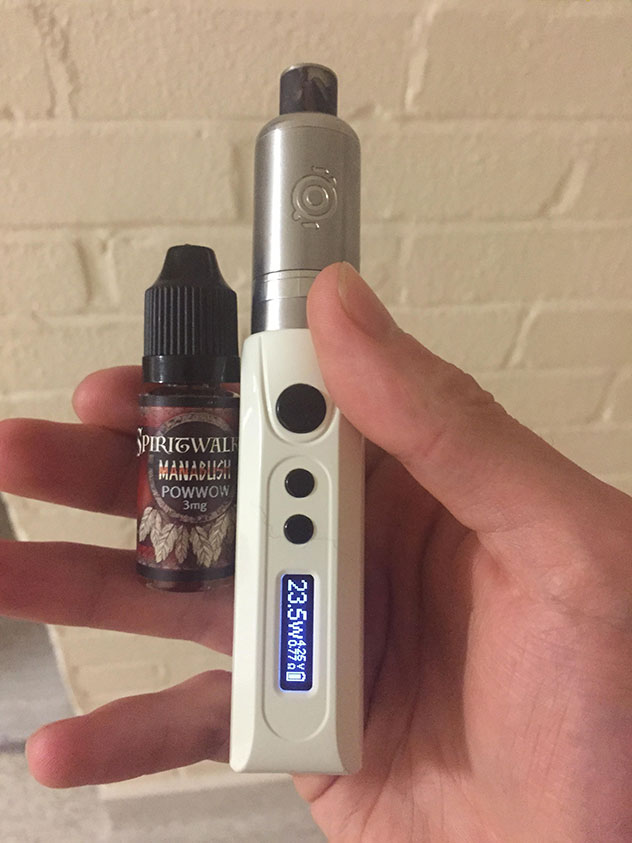 As mentioned in the introduction, the IPV D3 I received was a test version and as such some features were missing and/or are subject to change, such as the reported inclusion of voltage step down, 75J of output power in temperature control mode and the SX150H chip. A modified version of the SX130H chip found with the IPV D2 is present in the test version I received for review.

So far however, my first impressions of the IPV D3 are very promising indeed. I’ve been impressed with the new looks, paint finish, magnetic door and feature wise, I can’t fault it. Voltage step down is not something that I use with the IPV D2/D3, as I don’t tend to vape 0.3ohm coils at 10 watts, however the inclusion of it in the retail version of the IPV D3 will benefit myself as battery life will be extended slightly longer. For me, and many others, the IPV D2 was already an excellent unit and the small tweaks that will be applied to the IPV D3 will just set it apart from the competition even more. It’s shaping up to be a killer release from Pioneer4You and should the final version, sporting the SX150H chip, include voltage step down and 75J of output power as well as the features already included in the test version I received as well as a mid-range price point, we are looking at potentially the best single 18650 battery mod released to date. I’ll definitely be purchasing the finished article as soon as it becomes available based on my experiences with the test version.

Many thanks to Ash at Myepack for sending over the IPV D3 to us to review, you will be able to purchase the IPV D3 from myepack.co.uk upon its imminent release.