At one point in time iJoy used to be a mainstay of the vaping scene but they seem to have fallen a little by the wayside. They do look to have a couple of interesting new releases recently though, and Sourcemore has been kind enough to send one of those over for review. You may remember the iJoy Captain name from a few years back, one of the first dual battery 20700 mods to hit the market, well the Captain is back, this time in the guise of a single 21700 mod with the iJoy Captain Link.

The iJoy Captain Link is available in five colours (black, stainless steel, red, blue, and green) as either a mod on its own or as part of a kit with the Captain Pod Tank included. Unfortunately the full kit was out of stock when Sourcemore asked if there was anything I’d be interested in reviewing but they were kind enough to send over the Captain Link mod for me to take a look at, and this was the part of the equation I was more interested in anyway so everyone’s a winner.

This comes in a surprisingly large box for a single battery mod and there’s very little included besides the Captain Link mod itself, just a brief instruction leaflet and warranty card, USB-C cable, and an 18650 battery adapter. I have to say that the initial presentation is quite pleasing though with high quality prints on the outer sleeve and boxes etc. 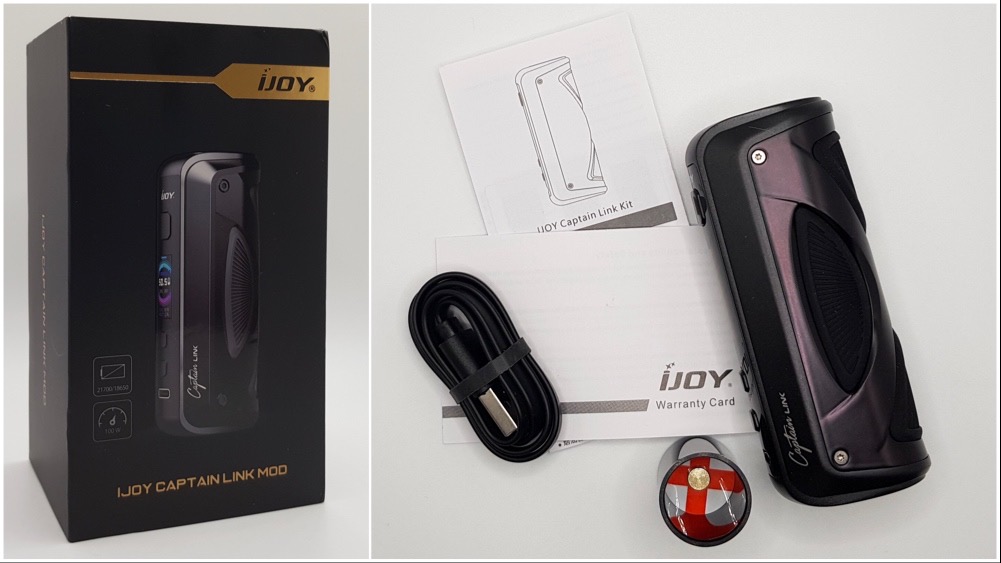 The Captain Link mod could hardly claim to be the world's smallest 21700 mod, the word “chunky” instantly springs to mind but in a good way. Even in my small hands, this isn’t too big which is something I was initially concerned about when I first read the dimensions online. 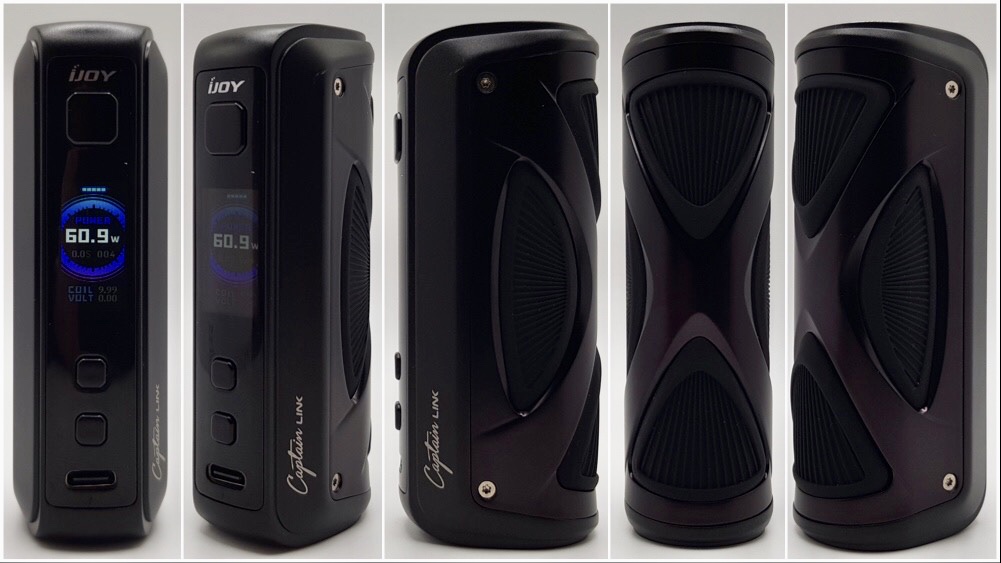 The main chassis is black with subtle branding limited to an iJoy logo above the fire button and a small Captain Link logo on one side. Around the sides and back are four large black silicone rubber pads held inside a coloured X shaped frame. In this black variant, this has a slightly iridescent property changing from a deep black to a dark purple as you play around with it in the light which helps set it apart from the rest of the chassis. The large silicone rubber pads make the Captain Link mod very comfortable to hold, a couple of the guys at work who’ve seen this have both commented on how much they like this and I have to say it’s one of my favourite features as well. The pads also make it very grippy, reducing the chances of this accidentally slipping out of your hand and should provide a degree of protection against drops and knocks as well.

The front panel has a large 0.96 inch colour screen set between the power and up/down buttons and this is bright enough to see outside with all the information laid out in a fairly logical fashion. All the buttons are well positioned, the power button is good for either trigger or thumb firing for example, and they have a nice positive click; there is a tiny amount of button rattle though which I tracked down to the “up” button but you won’t really notice this in use. 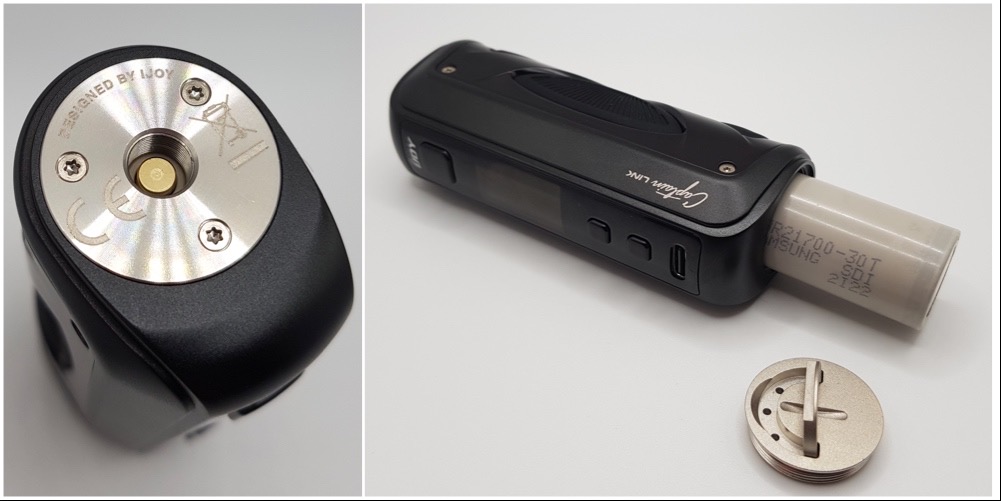 The Captain Link mod is 30mm wide however it is slightly beveled in towards the top, additionally the 510 plate is also raised 0.2mm above the top of the main chassis which means that whilst it should accommodate most 25mm atomizers anything larger than this will exhibit a degree of overhang.

The battery is held in place with a screw cap with a clear negative mark on the battery cap and a positive mark at the bottom of the battery tube. The cap has a flip up lever to aid in insertion and removal, and under this are three emergency battery venting holes which aren’t blocked with the lever in the closed position thanks to the clever design. What isn’t so clever is the number of threads used, you seem to be screwing this in place forever! On a more positive note, it easily passed both of the oversized battery tests and when using the onboard USB-C charging facility, it reached a peak charge rate of 1.5 amps and remained cool.

I don’t normally go too in depth with the operation of a mods menu system, but on this occasion I think I need to go through this in a little more detail as the included instruction leaflet is rather lacking. Whilst it has a total of nine languages, realistically the only thing it tells you is how to switch the Captain Link mod on/off with the standard five clicks!

One area that older iJoy mods were notorious for was a poor TC experience, and this is no different. Using my standard test atomizer with a SS316L build, this gave a rather weak insipid vape and it backed off way too early, no improvement there then!

I love the design of the iJoy Captain Link mod, especially the understated branding and those grippy silicone rubber pads around the back which make it super comfortable to hold and use. Whilst the power delivery was quick and consistent in wattage mode, the temperature control is just as bad as it’s always been on iJoy products and as a result, I’d only recommend this if you’re a strictly wattage only vaper.

Many thanks as always to Sourcemore for sending the iJoy Captain Link mod over for review. 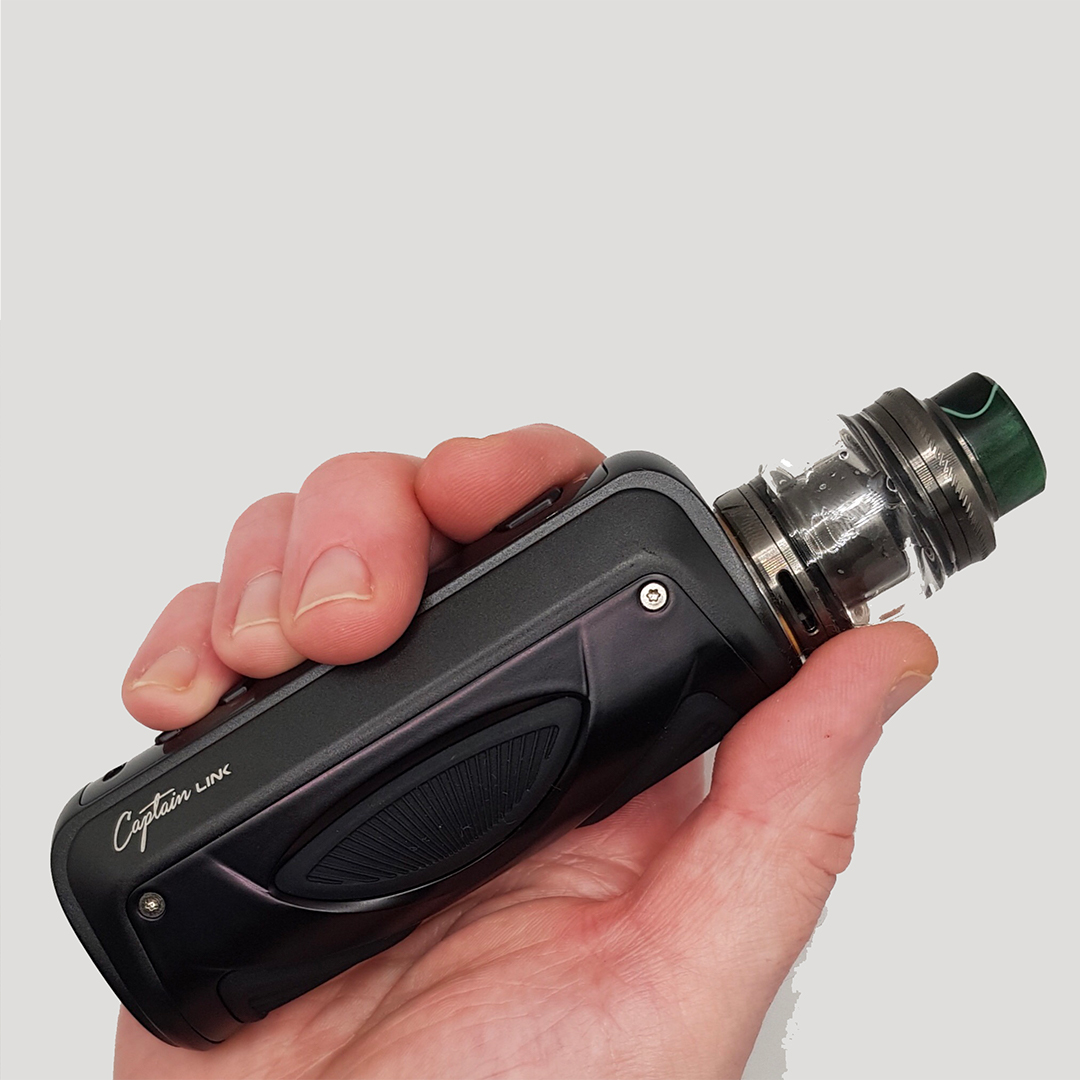