Hellvape got in touch recently and asked if I’d be interested in taking a look at a new mod they had coming out in “a couple of weeks”; as no other details were given I was expecting either another mech mod or perhaps the alpha fusion pod kit (which seems to be restricted to the Philippines market). I agreed and then everything fell silent… The date I initially anticipated this arriving came and went and there weren’t even any announcements on Hellvapes facebook page or main site.

After about a month, they started teasing something I wasn’t expecting at all, a unibody mod milled from a single block of metal, and as more details started being teased over the next few days I got increasingly excited by this release as it turned out to be a fully regulated 21700 box mod. This ticks a lot of boxes for me right off the bat and almost unbelievably, although Hellvape has done mechanical mods and pod mods in the past, this is their first fully regulated mod. It then took another month before this little beauty finally landed on my doormat, so let me introduce you to the highly anticipated Hellvape Arez 120 mod. 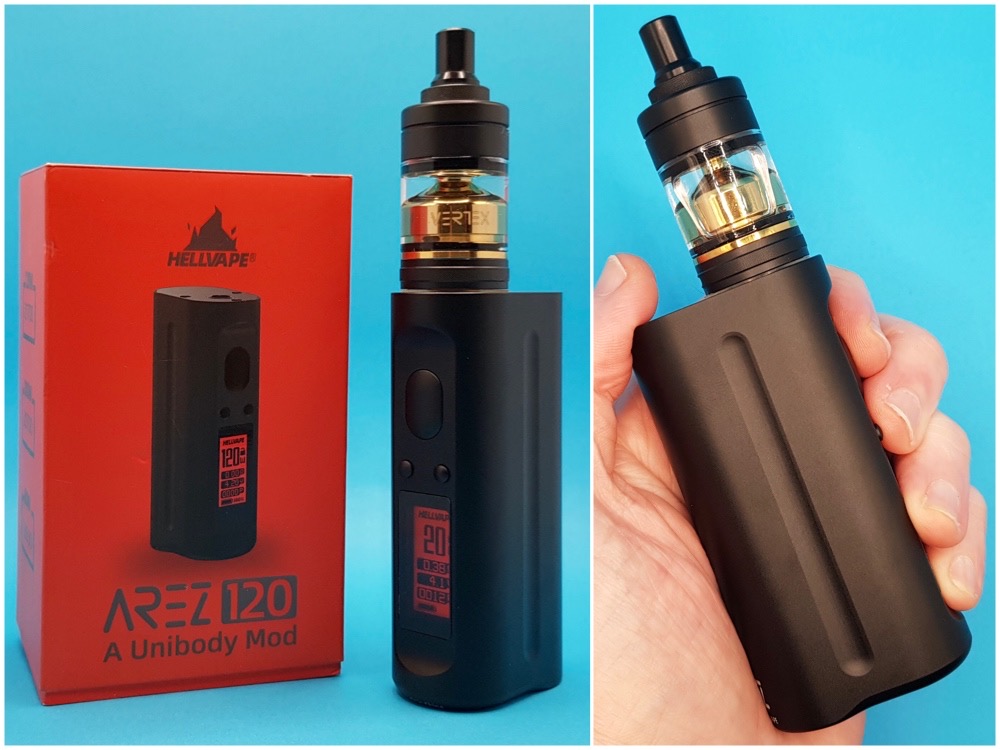 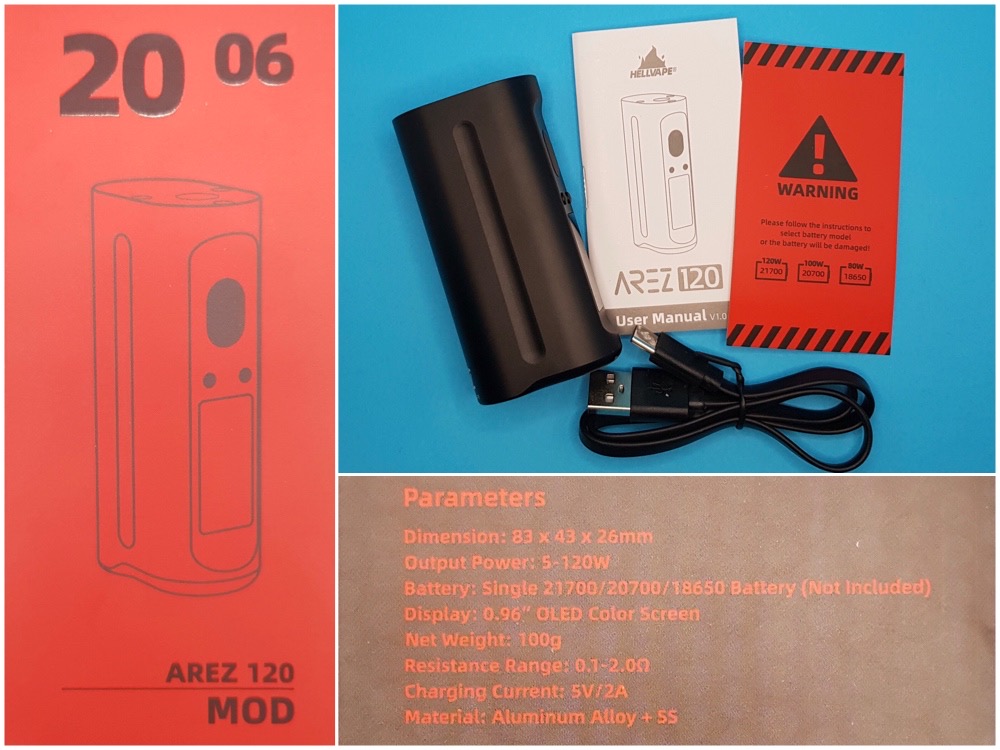 In the rather compact box you’ll find the Arez 120 mod along with a user manual, battery warning/warranty card and a USB-C charge cable plus an 18650 battery adapter hidden inside the battery tube. The Arez 120 is currently available in a “matte black” seen here, along with “gunmetal” and “blackish green” finishes which all look stunning. Hellvape has also teased some other potential upcoming colours on their social media feeds and some of those look very tasty indeed if they ever come to market.

Hellvape wanted to create something special for their first fully regulated mod and they chose ERGAL, an aluminium 7075 alloy more commonly seen in the aerospace industry, for the main body of the Arez 120 mod because of its high structural strength and mechanical properties. Inspired by Apple designs, this is then CNC milled from a single block of aluminium to a precision of 0.01mm and requires 1800T punch forming and nine milling processes to achieve. It then undergoes two polishing techniques and superfine glass sandblasting before the 7H rated surface hardness finish is applied. The attention to detail here is astounding and there are some fascinating videos of this on Hellvapes YouTube channel for those of you with a curious disposition. I can attest to the hard wearing 7H finish as well because I accidentally scratched the mod with my car keys the other day, I was horrified because it looked like I’d gouged a chunk of that Matt black finish off just above the fire button but a quick wipe down showed that it had in fact come away completely unscathed. 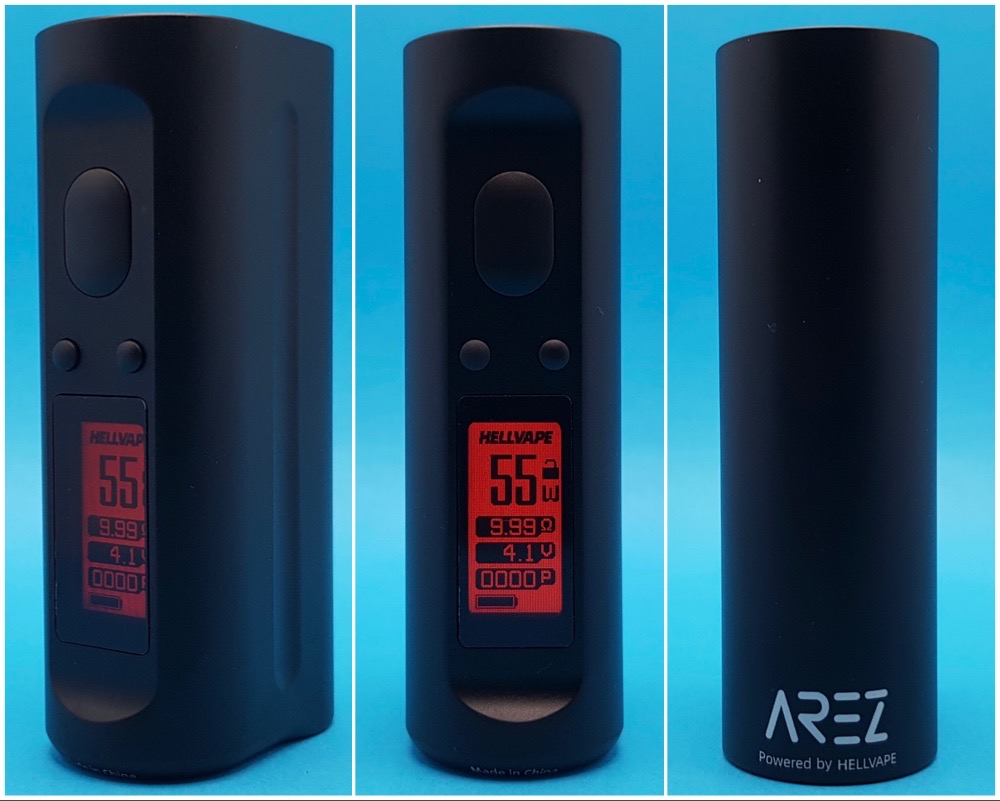 The Arez 120 is really comfortable to hold with its nicely rounded edges. Those cutouts on the side tend to lie under my thumb or fingertips in use as well which aids in grip. I like the minimal branding present here as well which gives the mod a super clean look. This isn’t quite the smallest 21700 mod in my collection, but it’s super compact and very pocketable.

The button layout is slightly curious with the up/down buttons being located  immediately underneath the lozenge shaped power button. All the buttons have a pleasant convex curve to them and are raised just enough above the frame to make locating them with your fingers easy. There’s absolutely zero excessive movement or button rattle present either.

The large power button is perfectly placed for either trigger or thumb firing but has a slightly strange two step feel, if you press lightly then you’ll feel the micro switch click but you need to press just a hair more before it actually fires. In fact all the buttons require quite a firm press. This has led to me occasionally thinking there’s been a misfire but you quickly learn that this isn’t the case and you get used to it. Despite my initial misgivings about the location of the up/down buttons, this has been a non issue as I haven’t found myself accidentally adjusting the wattage, and you can additionally lock them by pressing “power + up”.

Under the buttons, there’s the 0.96 inch colour OLED screen. Hellvape has gone for a super clean look for the interface which works well, all the information you need is clearly presented and you can change the colour scheme by pressing “up + down” together (the up/down buttons need to be unlocked to do this). The screen is quite deeply recessed into the frame and whilst the screen is fairly bright, some of the colour schemes work better than others especially if you’re outside in bright sunlight. One feature I particularly like here is that the voltage displays the current battery voltage when not in use and then the applied voltage when you press the power button, very smart.

Some users won’t like the fact that this is a wattage only board but I’ve been perfectly happy with it. It feels responsive and has all the modern safety features you’d expect with a maximum 9 volt output, so unless you’re an exclusively voltage or TC only vaper, you should be more than happy. Two complaints I would have here is that from 5 to 10 watts, the wattage is adjustable in 0.5 watt increments and then in 1 watt increments after this, it would have been better for MTL users if the 0.5 watt increments had been extended to say 20 watts, and secondly it sometimes feels a little underpowered especially with low battery so I’ve had to bump the wattage up a bit on the atomizers I’ve been testing this with. 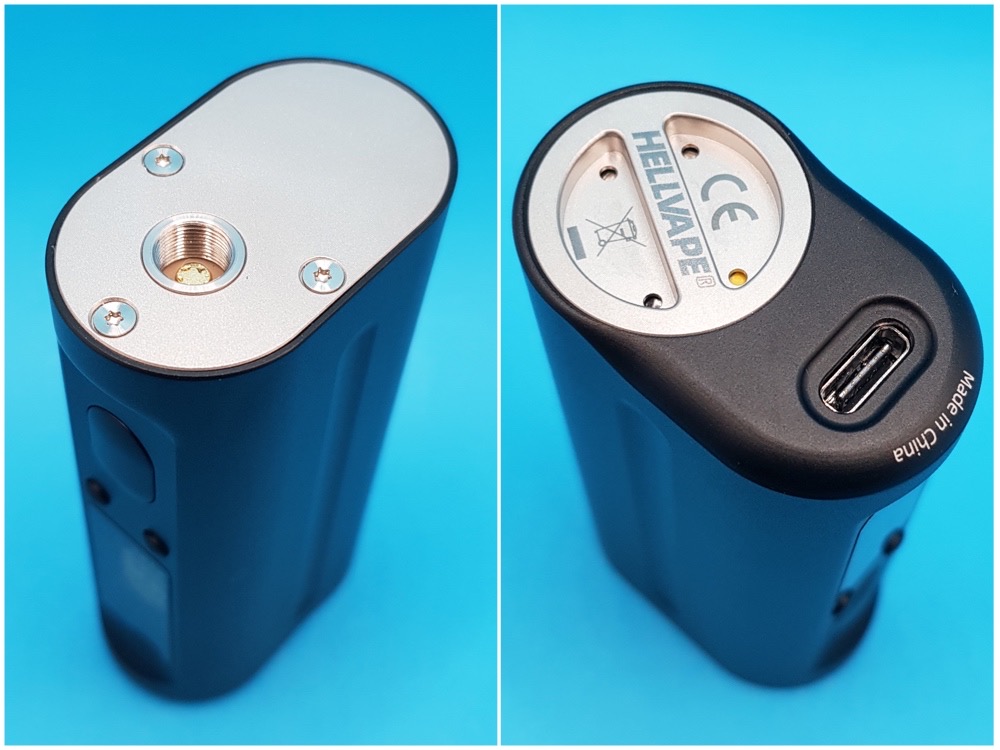 The top has a lightly sandblasted stainless steel plate where the innards have been dropped into place inside the unibody design, and everything is held in place by three security screws. The spring loaded 510 pin has a decent amount of travel, and if you run your fingers over it you can feel it’s slightly raised to reduce the risk of atty rash in use, it's subtle though as I wasn’t able to get a measurement for this with my crappy £5 plastic calipers. This is located towards the front of the Arez 120 and there’s plenty of room for up to 26mm atomisers here.

On the bottom you’ll find the screw-in battery cap which is clearly marked on the inside for battery orientation and has four holes for emergency battery venting. The threads did feel a little crunchy initially, a common issue with aluminium threading, but this has improved slightly with use. Just be sure to turn it backwards first until you feel it drop into place to avoid any potential cross threading. There’s a spring loaded positive contact at the other end of the battery tube to take up any battery rattle and this passed the oversized 21700 battery test with flying colours as my test batteries, which frequently defeat other mods, all fit with ease! 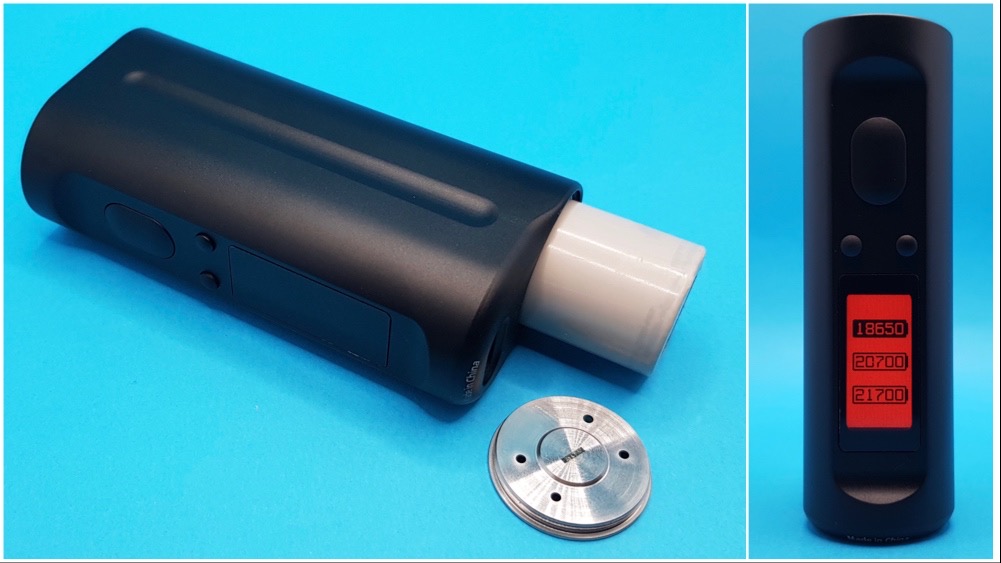 Also on the bottom is the USB-C charge port. This area will probably also act as emergency battery venting as well because if you look closely whilst the screen is lit, you can see this from certain angles. Hellvape claims 2 amp charging capability on the Arez 120 mod and in my test, it peaked at around 1.87 amps but spent most of its time around the 1.78 amp mark. Whilst this is charging, the chassis does get slightly warm but as aluminium is an excellent heat sink, it never feels uncomfortably hot during this process. I also noticed that the mod sometimes feels a little warm around the area with the Arez logo, particularly when chain vaping. I believe this is where power is being transferred through the battery cap to the chassis, however it’s never uncomfortably hot and the battery cap never gets hot either which is a good sign.

I can’t remember the last time I got so excited with the arrival of a new mod. The aluminium unibody chassis on the Arez 120 mod is a masterclass in design and Hellvape should be rightly proud of it. Some users might be disappointed by the lack of advanced features like temperature control, but this wattage only board with its clean UI suits this application perfectly. Longevity shouldn’t be an issue either as Hellvape say the onboard Hellchip is supplied by a “top level chip company” (they’re not specific) and the buttons have been tested for 80~100 thousand presses. Despite being in the vape business for several years, this is Hellvape's first regulated mod and I have to say, it was worth the wait.

Many thanks to Hellvape for sending the Arez 120 mod out for review. 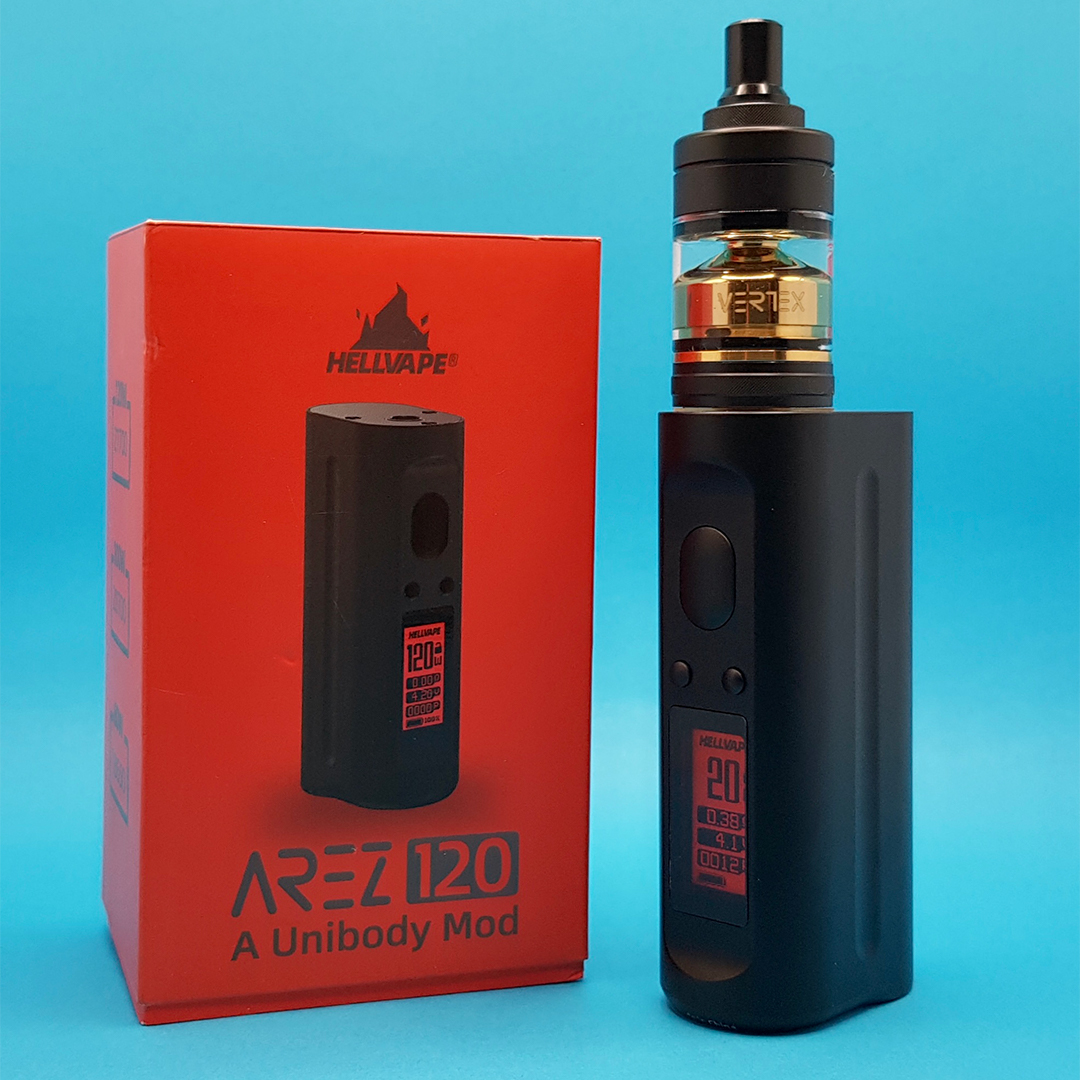