Today we have something slightly different in for review, Genmist tobacco free herbal Heatsticks. This is a heat not burn system (HNB) which is compatible with the iQos system, and as all the regular reviewers haven’t touched a cigarette for years there was obviously a little hesitancy when this was offered up for review so I hatched a plan…

Despite my best efforts over the last couple of years, my friend Jeremy still dual fuels (someone who vapes and smokes) and as such he seems much more like the intended target audience. With Jeremy on board, we handed him the Genmist starter kit and a sample box of Heatsticks to see how he got on… 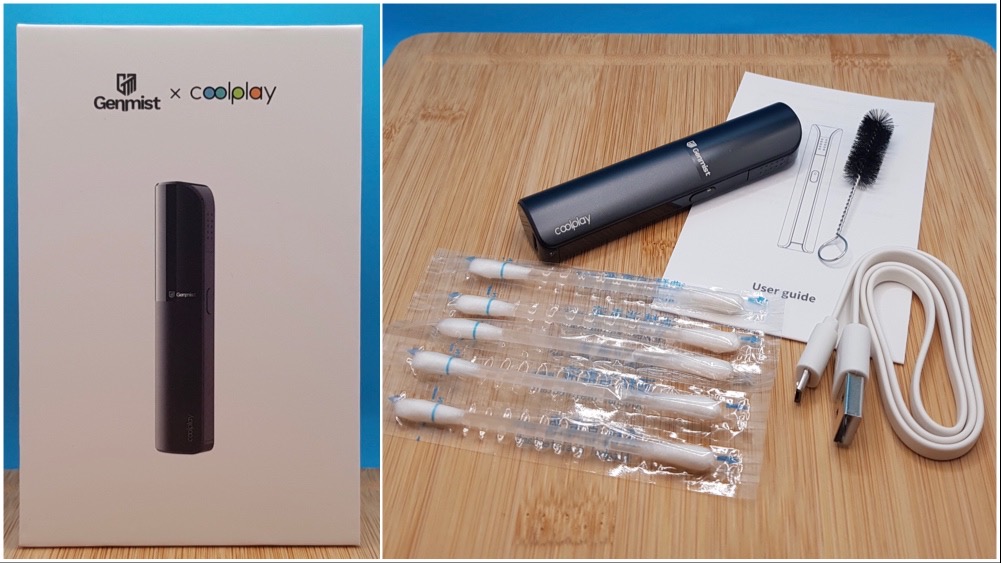 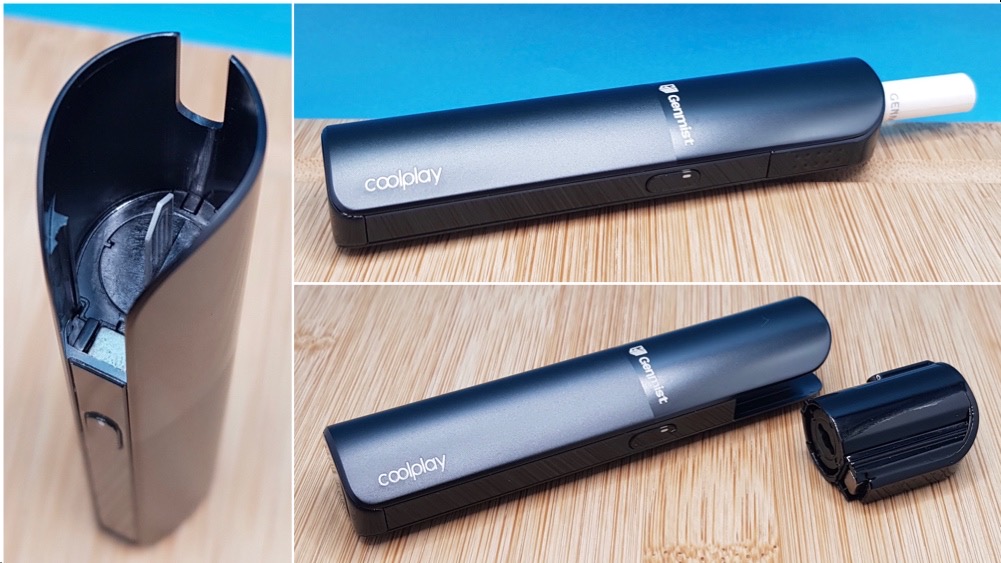 As with other heat not burn devices, this uses a ceramic heating element to “toast” the Heatsticks rather than setting them on fire as with a traditional cigarette. This results in much lower temperatures being reached, around 350 Celsius vs 900 Celsius in a cigarette, which produces much less of the noxious elements found in cigarette smoke and is therefore thought to be much safer (although not as safe as vaping).

To use the Genmist Heating Device, you gently push a Heatstick onto the blade and then turn the device on, after 24 seconds or so this will have reached temperature and you can begin to smoke.

The upper assembly can be removed as shown to allow easier access to the blade for cleaning, and it’s recommended that you do this roughly every ten Heatsticks for optimal operation. The internal 900mAh battery can be charged via a micro USB port on the base.

So with the basics covered and having left Jeremy to his own devices with the kit for a couple of weeks, I thought it would be a good time to see how he was getting on with the device in general and then move onto the Heatsticks and the available flavours a little further on.

Antony: What are your first impressions of the Genmist Heating Device starter kit?

Jeremy: It’s a very compact, lightweight and stylish design which means that it’s easy and convenient to carry around or put in a pocket.

Antony: How easy did you find it to put the Heatsticks into the Genmist Heating Device?

Jeremy: It was quite easy with most of the flavours sent, with a few you do have to apply a little more pressure though to get the Heatsticks onto the heating blade properly.

Antony: You have to initially let the device come up to temperature, did you find this inconvenient or was it easy to use?

Jeremy: The heating process takes 24 seconds and when I first started using the Genmist Heating Device, I did find this a bit frustrating. As a smoker, you expect to light up and start smoking immediately instead of waiting for your first nic hit, but you do get used to it quite quickly.

Antony: Obviously as a HNB device this doesn’t get as hot as a cigarette. I know as vapers that we often crave a bit of heat from our atomisers to replicate this sensation and I’m wondering how you found this, was it warm enough or did you find it a little bit too cool?

Jeremy: I actually found the Heatsticks were quite warm compared to a normal cigarette.

Antony: I’m assuming the draw is pretty much identical to a cigarette?

Jeremy: Almost, if anything it actually feels slightly more restricted than a cigarette.

Antony: The Genmist Heating Device times out after around five minutes or fifteen puffs, did you find this about right or did you feel like you needed more than one Heatstick at a time? Did you find this as satisfying as a cigarette?

Jeremy: Most of the time it was fine, but I did sometimes find myself having to use two Heatsticks in quick succession to feel really satisfied.

Antony: How was the battery life and charging times?

Jeremy: With the Genmist Heating Device fully charged, I found that I wasn’t getting through a full day and would frequently run out of power mid afternoon after roughly 13 Heatsticks. As such, you’ll possibly need to have the ability to top up the charge at some point through the day depending on how heavy a smoker you are. A full charge from zero took about 1 hour and 20 minutes.

Antony: This claims to be a “no burning, no smell” system, what were your impressions on that front?

Jeremy: No Burning? Yes. No Smell? Well it’s different to a cigarette smell but there’s definitely a strong smell, my wife hates smoking and says that she would prefer the smell of a normal cigarette over the smell from the Heatsticks! [Antony: I’ve been out with Jeremy whilst he’s been using this and some of the flavours do definitely have a bit of an odd odour!]

Antony: For optimal performance, you have to clean the device roughly every ten Heatsticks. Was this a messy job and did you find this difficult or inconvenient?

Jeremy: It was easy to clean at first with the included tools, but then I noticed that there was some residue build up on the blade after a while. This was fixed by using ear buds with a little isopropyl alcohol to clean the blade. The included ones are supposed to be presoaked but these seemed as dry as a bone. 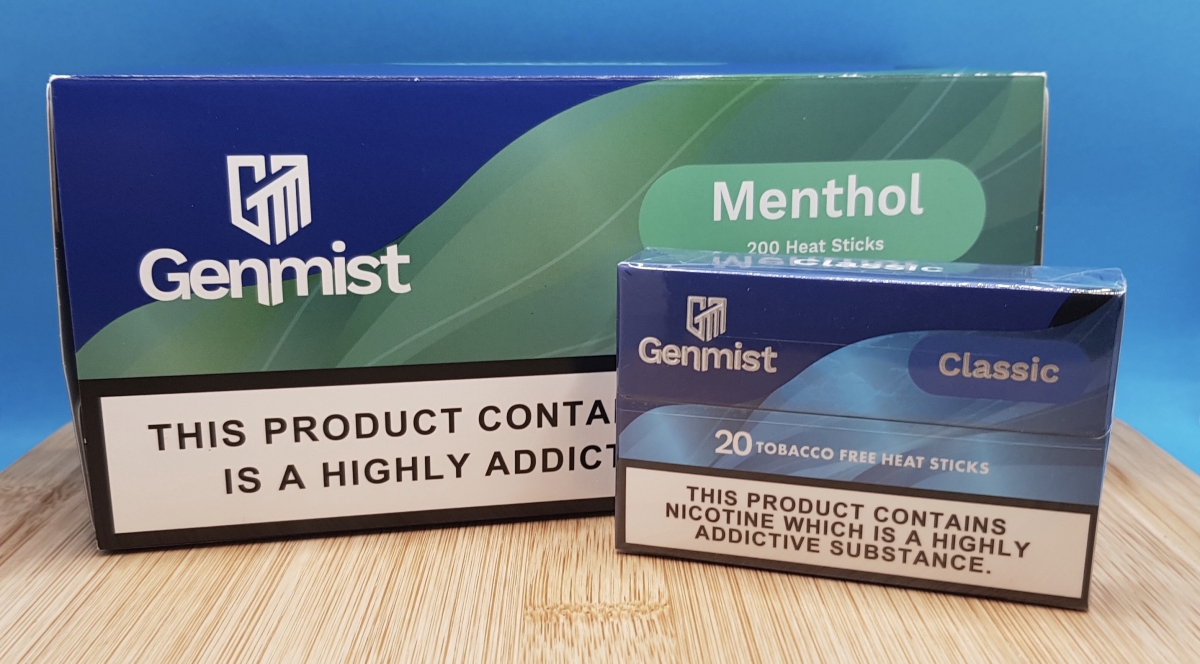 The Heatsticks come in a carton of ten packs with each pack containing twenty Heatsticks, much like cigarettes, although the individual packets are much smaller than a cigarette pack, and as such the packaging should be instantly familiar to anyone who smokes. These are currently priced at £32.99 per carton (£3.29 per pack of 20) which is much cheaper than cigarettes and compares favorably with iQos HEETS which cost around £50 per carton. 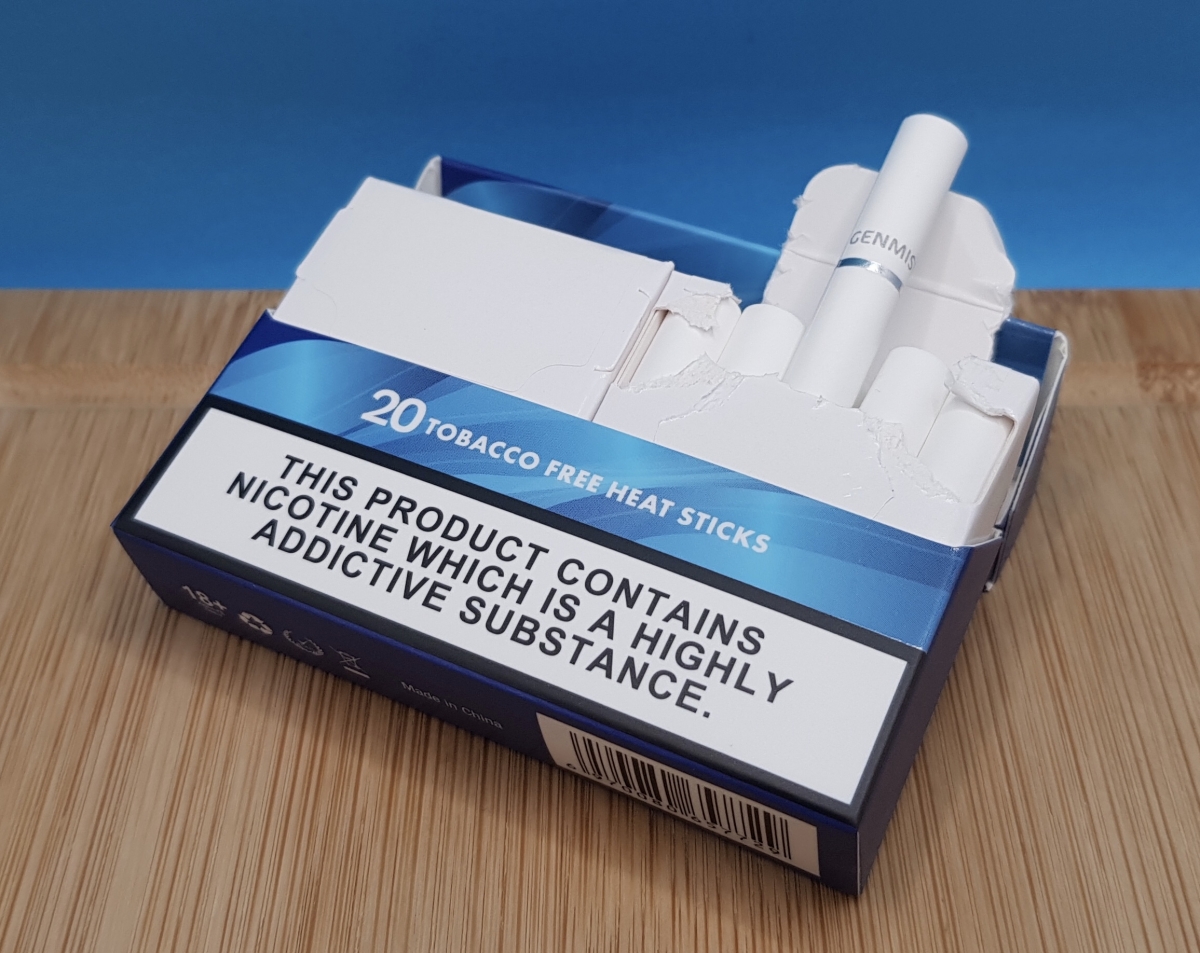 Each Heatstick contains about 2mg of nicotine which seemed low and could explain why Jeremy occasionally found the need for more than one Heatstick at a time. Having said that, iQos Heets only quote a figure of 0.5mg of nicotine and the Heatsticks have the additional advantage of not containing tobacco as they are made from a mix of organic herbal leaf. Eight different flavours are currently available and below you’ll find Genmists description with Jeremy's impressions of each:

“The mellow and full-bodied aroma of the Genmist's Classic herbal stick brings the experience feeling comparable to the real cigarette.”

I found the classic did indeed taste very similar to a normal cigarette although perhaps a bit on the stronger side.

“Refreshing menthol taste with a super cooling that brings a strong feeling of excitement. The strong mint fragrance hits your throat and intensively stimulates your taste buds to give you a smoking satisfaction.”

The Menthol flavour here is very prominent and is much stronger than a standard menthol cigarette. I found this a little too strong for my tastes but as a bonus I found that having a glass of tap water after one of these makes it taste as if it has just come from an ice cold fridge. This is one for those who really like menthol!

“The Mint flavour stick delivers a fresh mint aroma and gives your throat a cool feeling, a perfect mixture of refreshing minty taste and cooling sensation. It tastes similar to traditional cool smoke.”

I would say this compares favorably to a normal menthol cigarette so this would be the obvious choice if that’s been your previous go to choice. The only issue I found is that the minty flavour didn't always last the full duration of the Heatstick.

“Coffee scent embedded in a rich smoking feeling from nicotine, enjoy the afternoon with the strong aroma.”

Whilst this might sound a little bizarre to someone who’s only ever smoked, I found that this turned out to be one of my favourites. I loved the lingering coffee taste this left me with for a while afterwards.

“The upgraded Genmist Light has a whole new soft, smooth, creamy and rich butter flavour taste blended with light tobacco. With a strong mouthwatering butter aroma, it is a treat for butter lovers”

This is supposed to be similar to a light cigarette but I came away from these disappointed with a lack of any real flavour to speak of.

This really isn’t for me at all, it’s quite pungent which Mrs J didn’t appreciate one bit, and it has a really powerful aftertaste which I found mildly unpleasant. I don’t like cinnamon vapes either so I shouldn’t have been that surprised really.

“Yellow Blast has a blend of refreshing lemon and a mild mint.”

Now this is a flavour that I really found myself enjoying. It has a really nice light citrusy taste, and this was even further enhanced once I realised that there’s a mint flavour capsule that you have to pinch to get the full effect. Easily one of my favourites.

“Tobacco mix with fruity and menthol flavour, creating a rich taste experience. It has a refreshing aftertaste and a strong lingering aroma of blueberry, letting you enjoy the sweet leisure moment.”

Genmist says that this is their bestseller and I can see why. There’s a great fruity taste combined with a menthol burst which really compliments it. I would say that this is my favourite one out of the bunch.

Whilst Jeremy has enjoyed his time with the Genmist and the Heatsticks, it's not all been plain sailing. He found the battery life and cleaning to be a bit of a hassle stating that “You'll have to make extra cargo space to carry a power bank, a charging cable and a cleaning kit with you.”

The Heatsticks themselves have been a bit of a mixed bag with a couple of clear winners (Blueberry and Lemon Blast), whilst there are a couple that I know he wouldn’t want to use again.

Whilst Heat Not Burn technology has really failed to gain a foothold here in the U.K, this might be worth a look if you’re stuck on cigarettes and can’t get on with vaping. 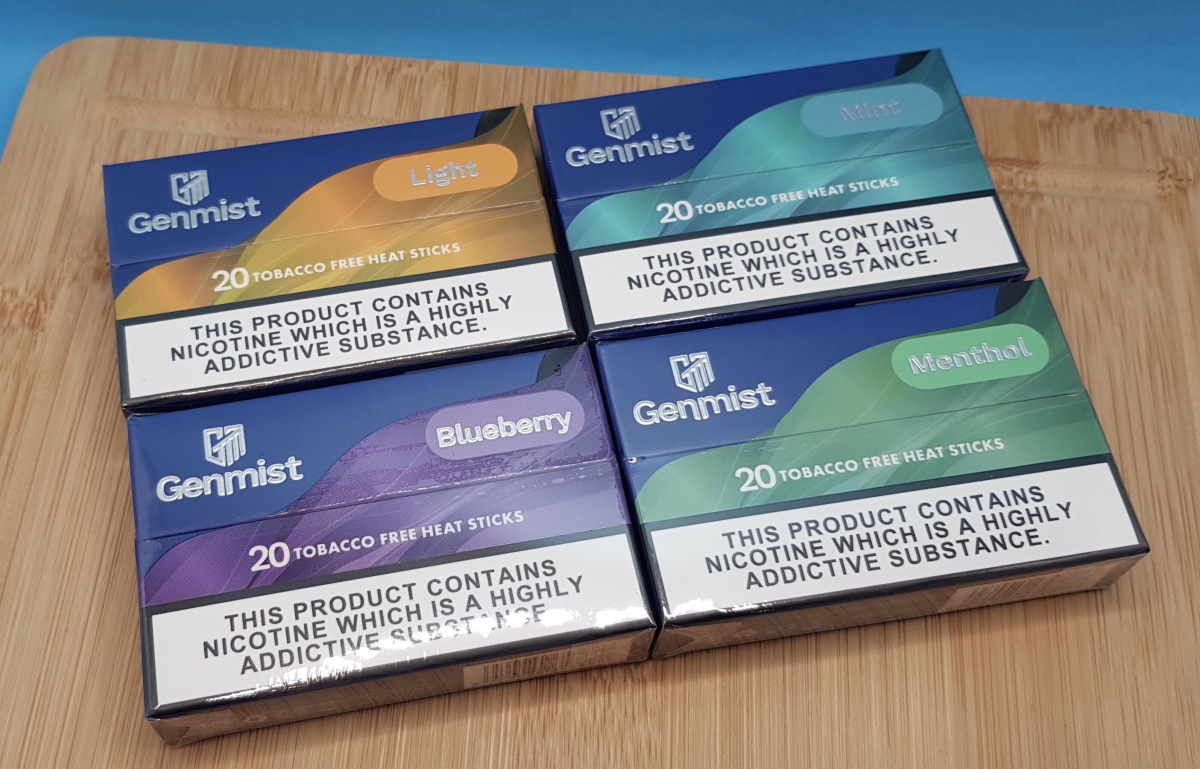