A bit of a strange request to review this kit as it was originally released in 2018, I remember being interested at the time but it somehow passed me by so I was keen to see what I had missed out on. Will it stand up to today’s competition or is it an old-aegis-pensioner? – plot spoiler; this kit is still very much relevant.

The review team at POTV are trying to mix things up a little in an attempt to reduce the swollen epic reads that some reviews can become, there will be less copy and pasted bumf and we will only discuss the important features. Let us know if we are on the right track via the POTV forum:
https://www.planetofthevapes.co.uk/forums/ecig-discussion/general-chat/

Right let’s get stuck in:

The Aegis Mini, as its name suggests, is a compact sub-ohm DL kit. It has a 2200mAh built-in battery, and the Cerberus 2ml tank is also mini which makes this kit very pocket friendly. It is also light-weight and rugged with waterproofing so it’s built to last. 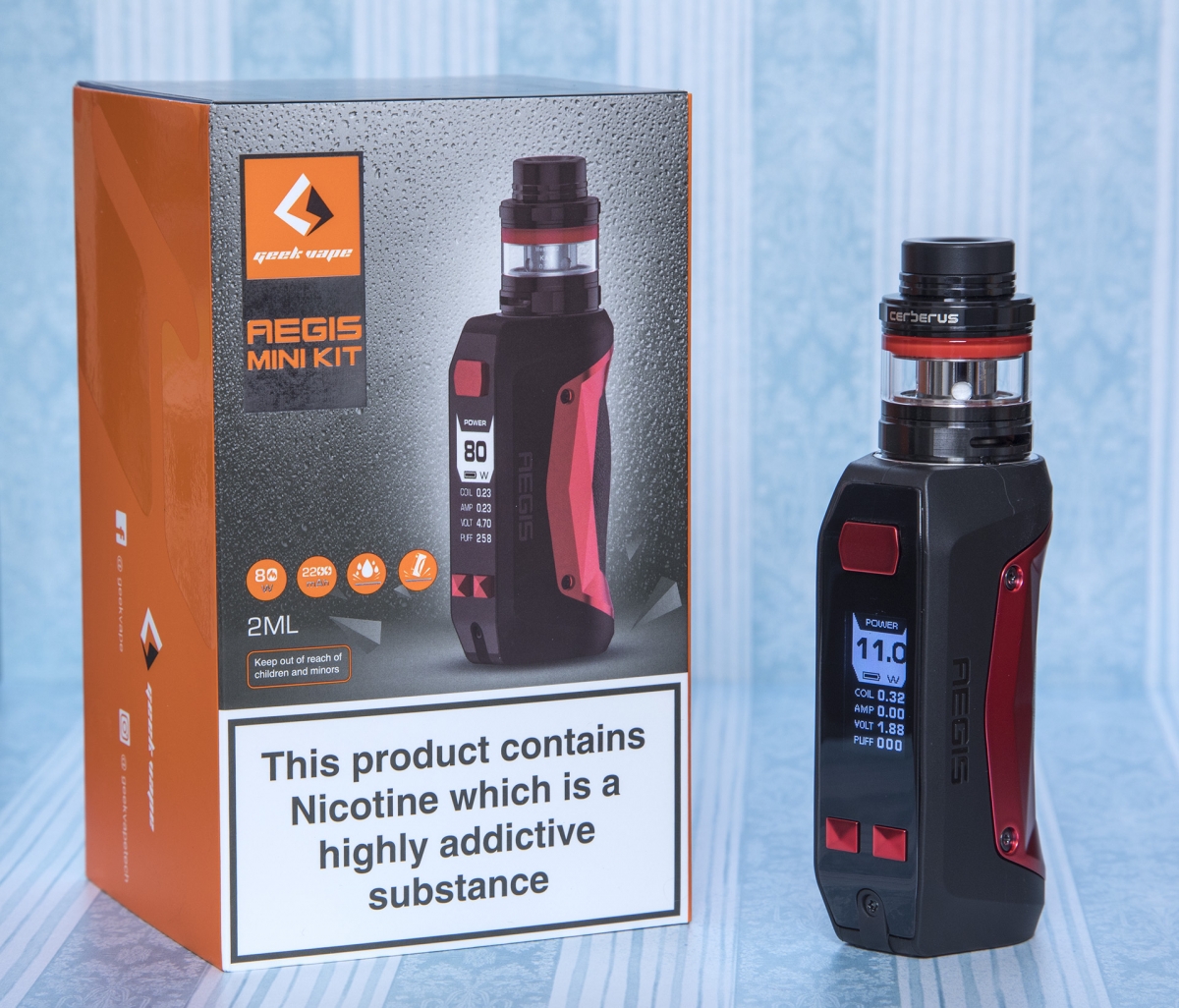 The box is sturdy and postman-proof, it contains all the stuff you need to start vaping, apart from juice, as well as a shedload of spares. This generous bundle wasn’t lost on me as it appears recent kits and pod kits are containing less and less these days, I’m not going to name SMOK for example – Doh! I just did! 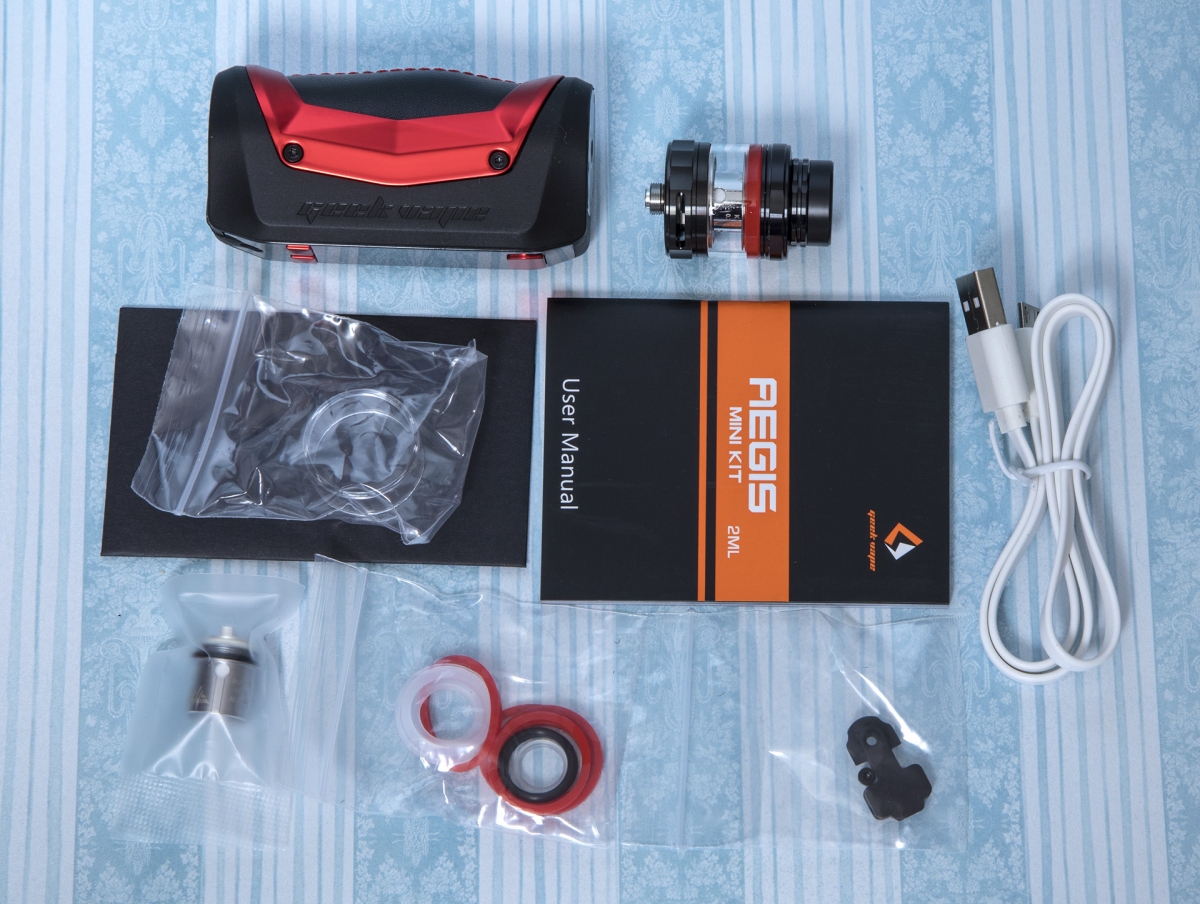 The Micro USB cable is a good length and is good quality, and a spare tank glass and a set of seals are always welcome. The inclusion of the charging cover bung including the little screw impressed me. 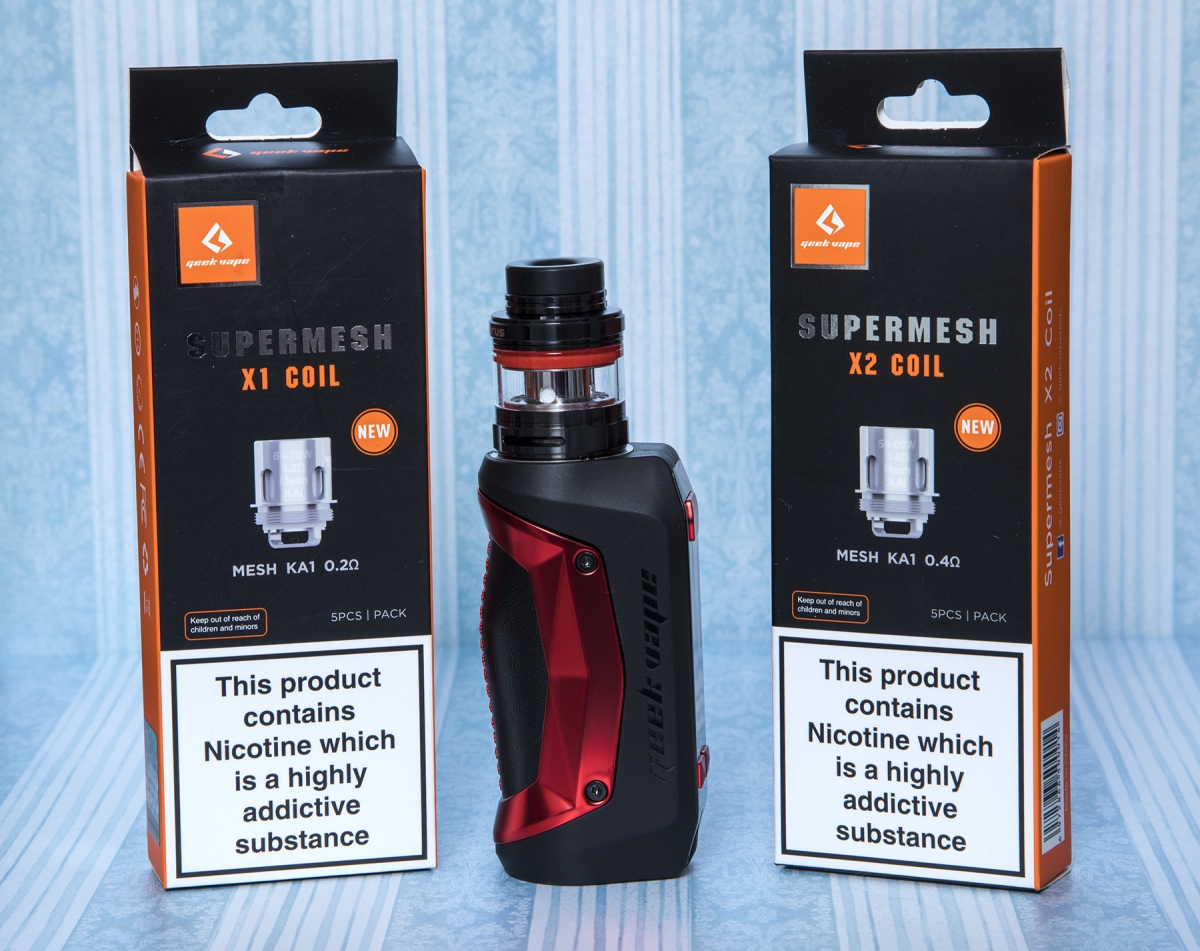 Though the kit only includes two of the same 0.3Ω coils, you can now get 0.2Ω and 0.4Ω mesh coils for it, a pro is they state the metal these mesh coils are made of (Kanthal).

GeekVape were the first ones to use leather and an exoskeleton years ahead of the current copycat vapes we are seeing these days, it was always the Aegis style along with the rugged rubberised coating. I really like it and it would look odd to change it, they used it in some of their later pods such as the Aegis Boost. Rather than babble on about the looks and features, here’s a few photos to mull over: 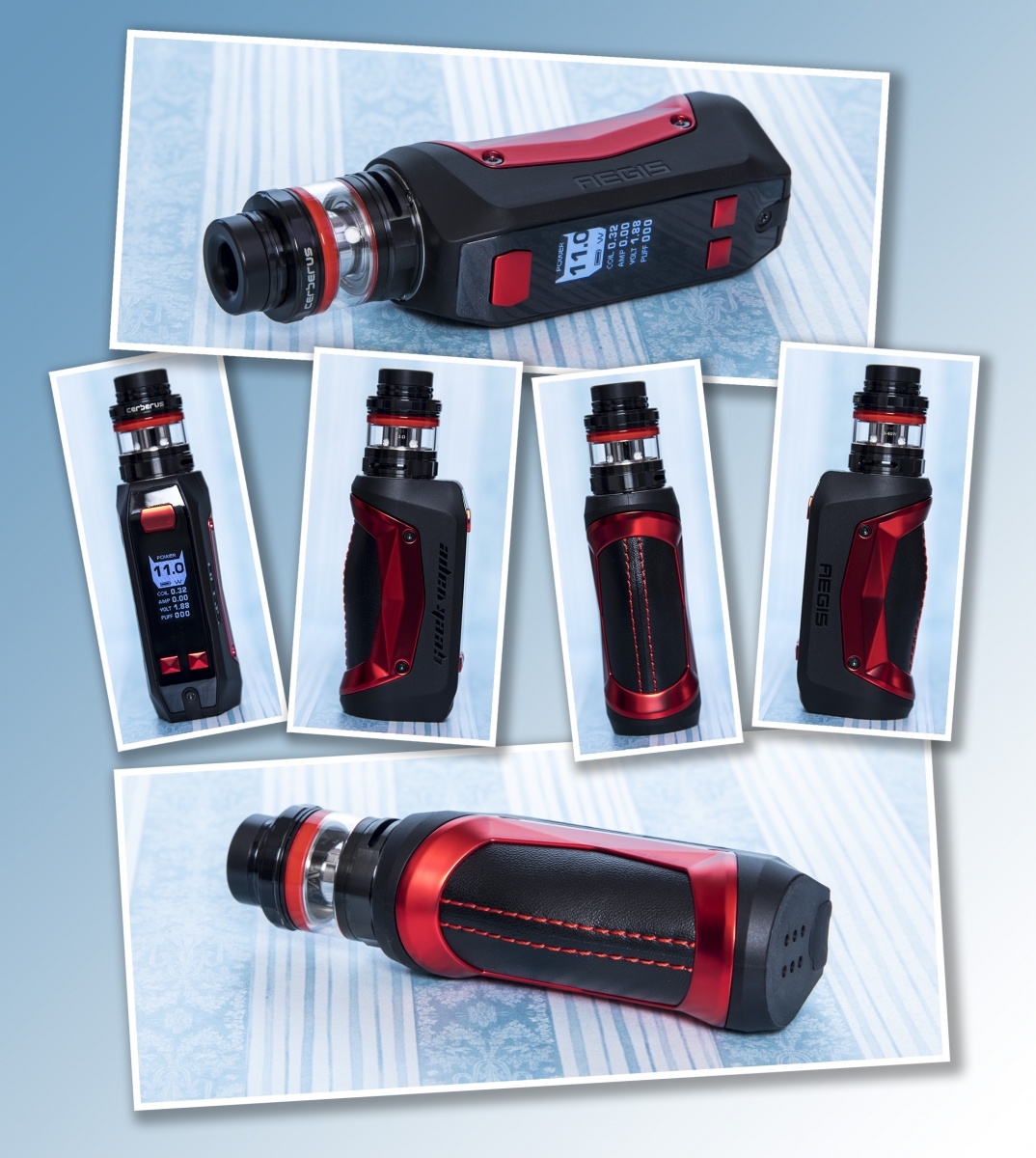 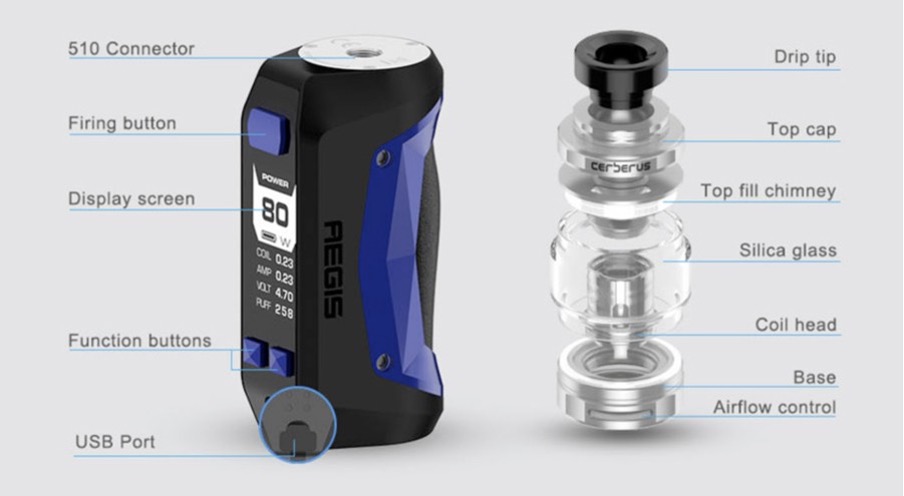 The one thing that the photos don’t show is the size and weight:

It’s not the smallest kit, but for a sub-ohm 2200mAh I would say it’s very compact. It fits snuggly into your grip, it’s sort of chubby but I mean that in a good way for ergonomics, this thing is so damn comfy.

For anyone familiar with the GeekVape Boost Pod (version 1) here it is side by side: 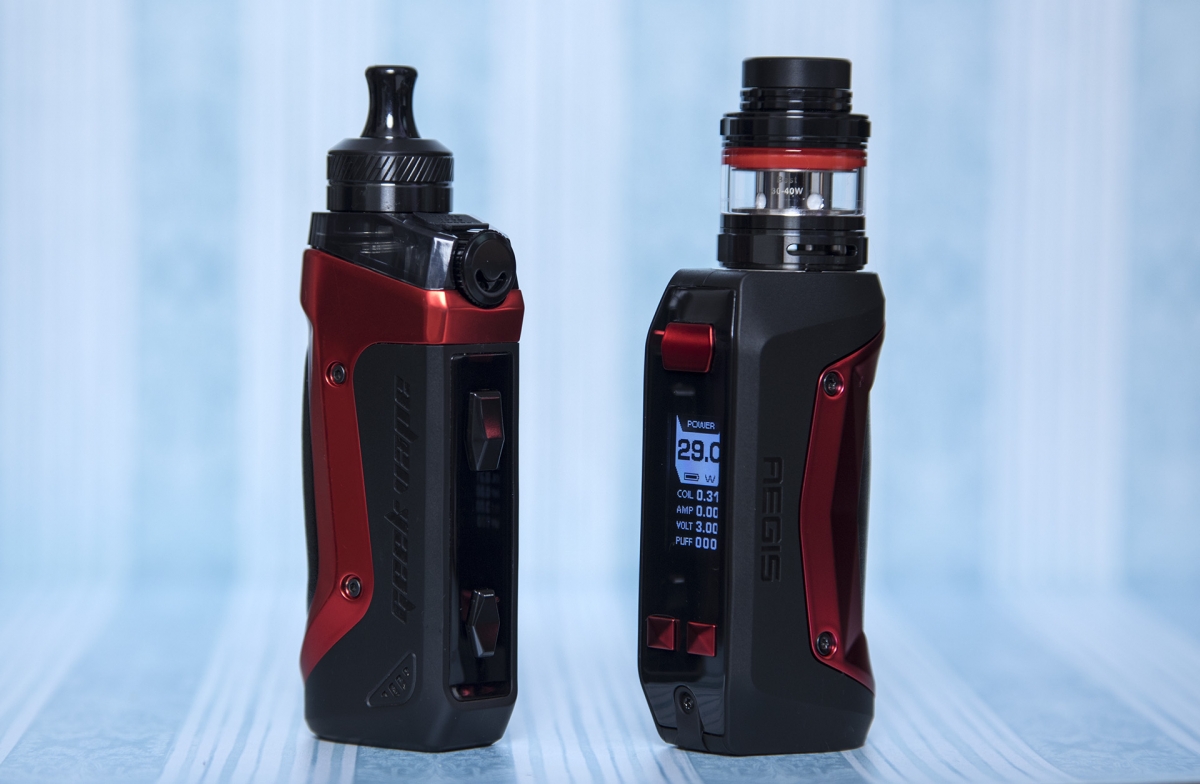 Considering the battery capacity and 80 watt fully featured chipset, you can see how impressive a job that Geek Vape have done with this kit. The Boost only had 40W and a tiny screen with half the battery capacity, the larger screen is much brighter too.

Here it is next to its larger brother. The difference might not look massive, but in the hand the Mini feels far more comfortable and lightweight. I would definitely choose the mini for out and about (when we are allowed to go out and fog up public places). 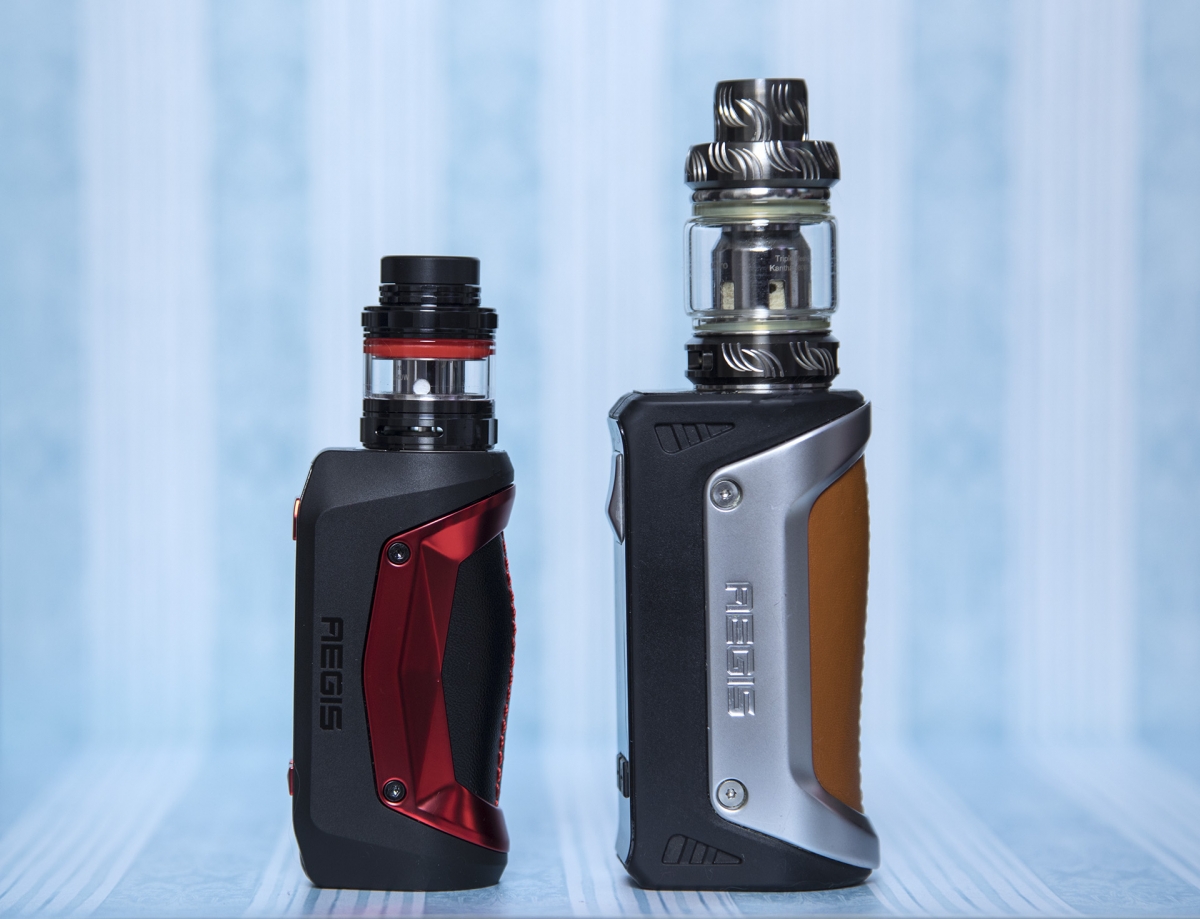 Though the Cerberus tank is 24mm in diameter, the 510 plate on the mod is 27mm with around 1mm of rubber around it so you could possibly fit a 28mm tank onto it! I lobbed on a Zeus Mesh 26.5mm onto it and surprisingly it didn’t look out of place.

I really like this little bugger, there’s zero innovation but it is really well constructed and so compact. It’s just an great old-school sub-ohm tank. 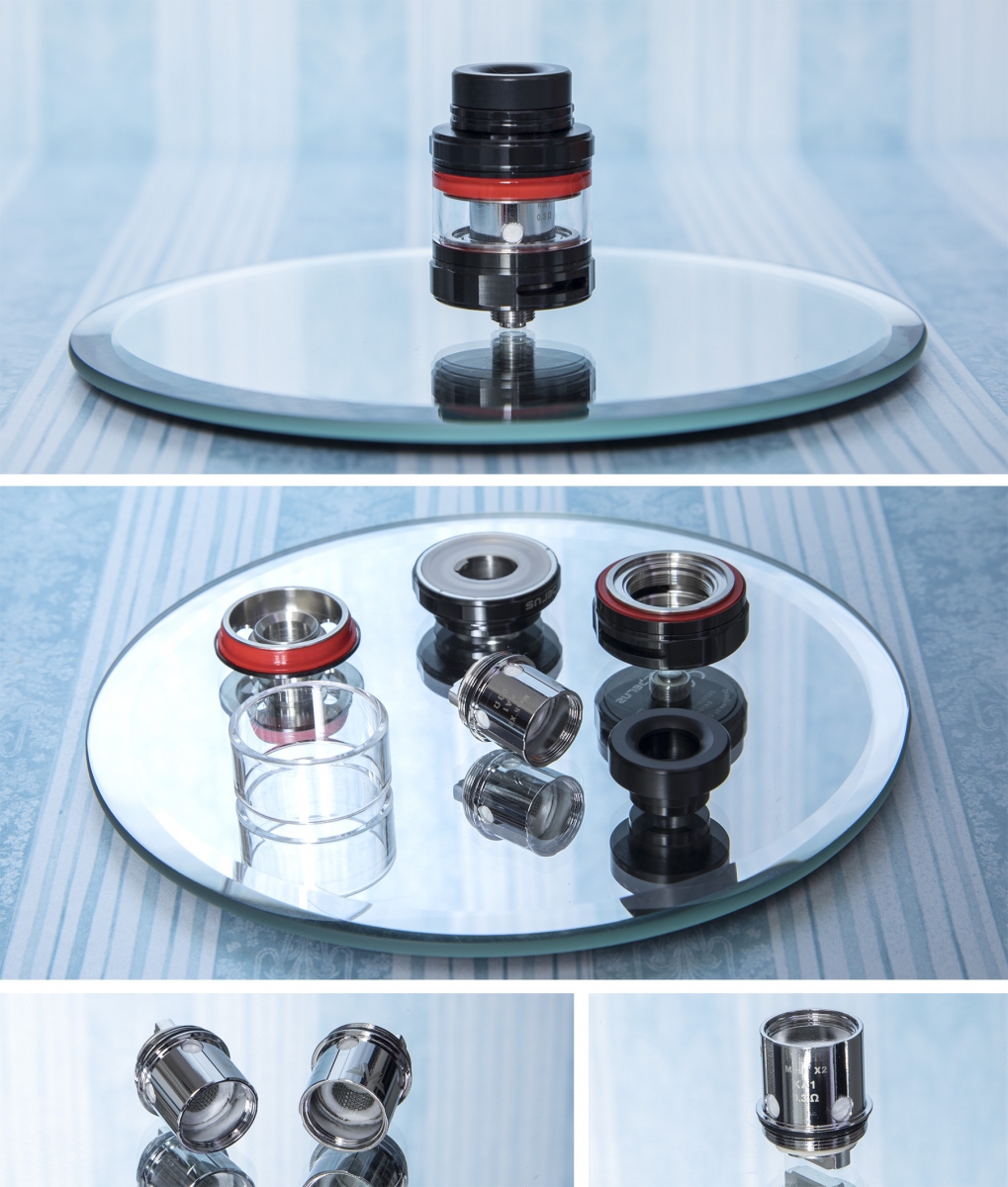 It’s easy to strip down which is something I miss with pods as you can’t give them a proper clean like you can with this tank.

The included coils are wide single bore superdoopapooerscoopamesh 0.3Ω, oooops my mistake, Supermesh, and the top is nice and open making priming the coil with juice easy.

The newer 0.2Ω and 0.4Ω are also single bore but feature a little more cotton and larger wicking ports so the coil life will be better, though to be fair the original coils never gave me a dry hit and kept up with chain vaping.

Anyone familiar with the Aegis series will feel at home with the operation.

The only modes you will need for stock coils will be Power, Bypass or the rather excellent VPC. The other TC (Temperature Control) modes are for RTAs with the specified wires.

Variable Power Curves can often be confusing and too much of a faff, but not so on the Aegis Mini. Basically it varies the wattage applied during your vape, ideally a higher first hit and slowly ramping down which offers a much better vape. Without it you tend to find the coil gets hotter the longer the draw which isn’t as pleasant and reduces your coil life.

All you need to do is select five wattage settings by scrolling. Here’s the setting I used on the 0.3Ω coil and the vape was sublime!

Using the kit 0.3Ω (30-40 watts) at 35 watts with the airflow fully open, I was amazed how airy this tank was! For its size, the airflow is really wide. The wide bore drip tip helps. When you look at the smallish dual slots, you wonder where all that air is coming from, very impressive! Though I did close it off to 2/3rds to suit my tastes, flavour was on par with any other sub-ohm stock coil tanks I could think of in that ohm range though the vapour production was lower than I expected. It was also a little cool for my tastes so I upped it to 40 watts which was my sweet spot and it produced much larger clouds.

As mentioned above, VPC was my favourite mode, but BYPASS also performed well and felt close to a 40W vape.

Battery life with this coil was impressive, almost a full day of moderate use.

0.2Ω Supermesh 60-70 watts was more like a full on sub-ohm cloud chucker, flavour wasn’t quite as good but it still gave plenty of flavour. The clouds were dense and I soon fogged up my living room, this is definitely an outdoor coil for me! The downside of this coil would be the battery life which won’t last you a full day.

0.4Ω Supermesh 50-60 watts is the pick of the bunch for me. Despite being higher ohms, it requires more wattage and gave a warmer and flavour punching vape. This was the 3rd of the coils I tried but was so much different to the other two, my perfect balance of flavour, warmth and clouds. Battery life was just over half a day, but despite this I still would choose this coil over the others. 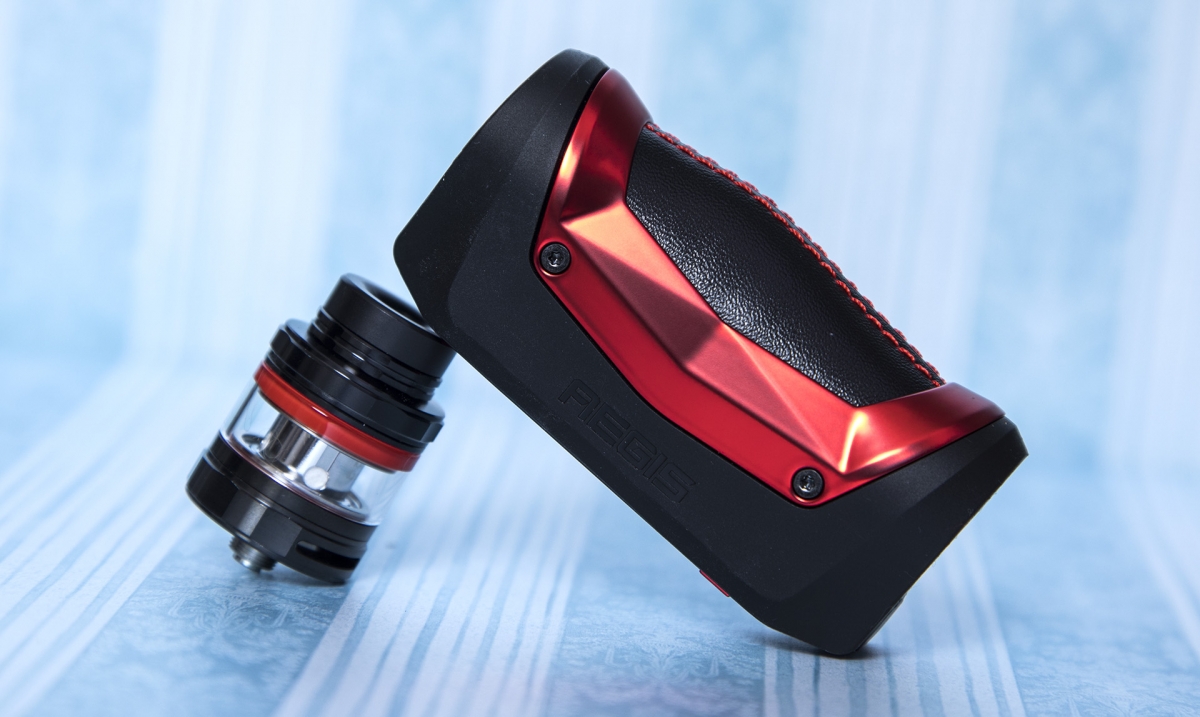 By the time I had finished testing the Aegis Mini kit, I had completely forgotten that it was an older release and it doesn’t look out of place in my collection. This could easily be a new release and nobody would think anything different. The newer coils add to its appeal which surprised me the most. The only tell-tale sign of its age is Micro USB, but then again we are still seeing brand new kit still using Micro USB.

I can now understand why Vape Club were keen to see the Aegis Mini included in our reviews now, this is a hidden gem that many won’t be aware of, especially newer vapers, and I thoroughly recommend this kit for new and experienced vapers. As much as I love new and shiny releases, I often forget what makes a traditional sub-ohm mod kit good. The Aegis offers plenty of functionality in a small bundle, it might have eaten all the pies but they were good pies it stuffed itself with!

The Aegis Mini proves that there’s a lot of kit still out there with plenty more shelf-life. With the insane amount of new kit released weekly, we often miss or forget about a lot of the greats which at the end of the day provide everything a vaper needs.

I am now wondering what else I’ve missed out on?

Looking for innovation? You won’t find it here. Looking for a solid feature packed pocket rocket? The Aegis Mini may well be your thing.

I’m 50/50 about the price tag of £44.99 but knowing the bullet proof construction of the Aegis range, then it should last you ‘Aegis’ so in that sense it’s value for money.