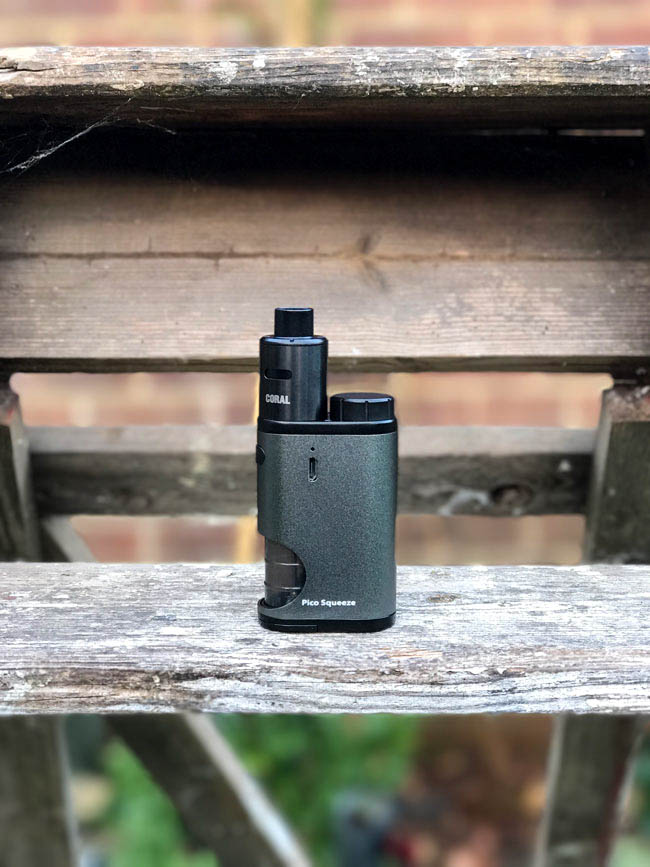 Eleaf’s first attempt at a squonker is the Pico Squeeze, which is also available bundled with the Coral RDA. The Pico Squeeze mod is a single 18650 battery device, offering an experience similar to what a mechanical squonker can offer but with added safety features, and has a 6.5ml bottle capacity that easily feeds your atomiser. The Coral RDA is an optional extra with the Pico Squeeze, and is a two post RDA featuring large adjustable airflow, a removable build deck and pre made Clapton coils are available from Eleaf specifically built for the Coral RDA.

It’s in the vein of the hugely popular Kanger Dripbox, a small and straightforward squonking unit appealing to all sections of the market, offering a low cost squonking experience with premium performance. Packages like the Pico Squeeze with Coral RDA kit and the Kanger Dripbox kits have opened up squonking to a whole host of new users recently, and what was previously a pretty niche area of vaping has rapidly become very popular over the course of 2016!

Today I’m taking a look at the Eleaf Pico Squeeze with Coral RDA kit, let’s have a look at what it has to offer.. 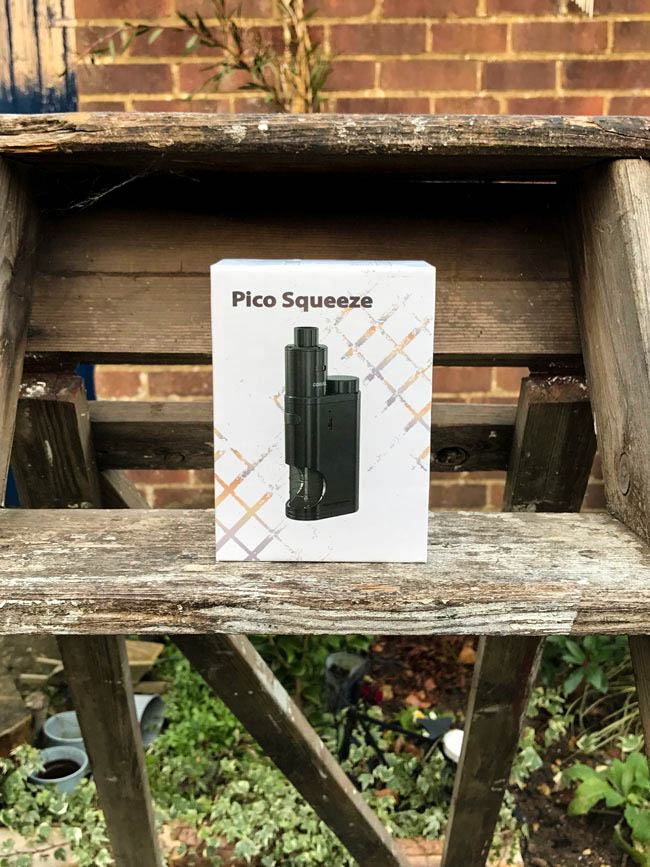 When holding the Pico Squeeze I can’t help thinking about how well made it feels and how good it looks. The finish has a real premium look to it with colour finishes available in black, white, silver, grey and hot pink. It fits in your hand perfectly and the side orientated bottle and power button are dead easy to reach and operate. At the side is a USB port for charging the device, and an LED battery indicator that displays how much battery life is left. 60%-100% battery life will mean the LED stays lit, 30-59% will mean the LED will flash slowly, 10%-29% will mean it flashes at moderate pace and 0-9% will mean it blinks rapidly to alert you to change the battery. The twist off cap at the top means you can gain quick access to the battery, and this is a great feature of the Pico Squeeze. 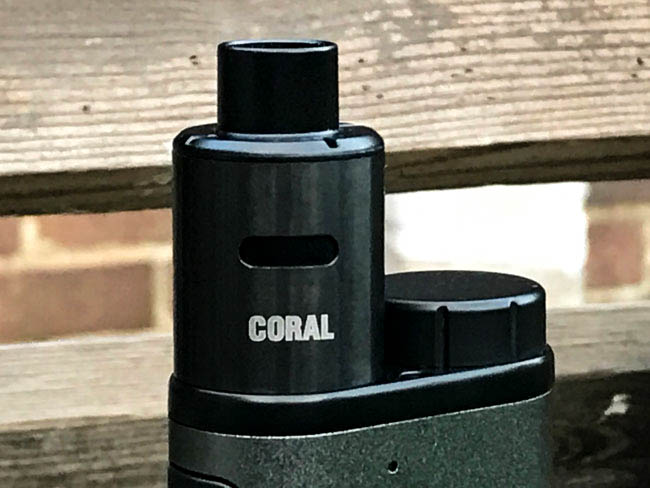 The squonking system is similar to the one found on the Kanger Dripbox- even the bottles look extremely similar (however aren’t interchangeable)! It’s not reinventing the wheel as such, but it is a very easy system to use. There is a magnetic battery cap at the base of the device- pop this off and you will be able to slide the 6.5ml Squeeze bottle out easily. Fill with your chosen juice, pop the bottle back in and the magnetic cap back on, squeeze the bottle to feed juice to your deck and you are ready to go! 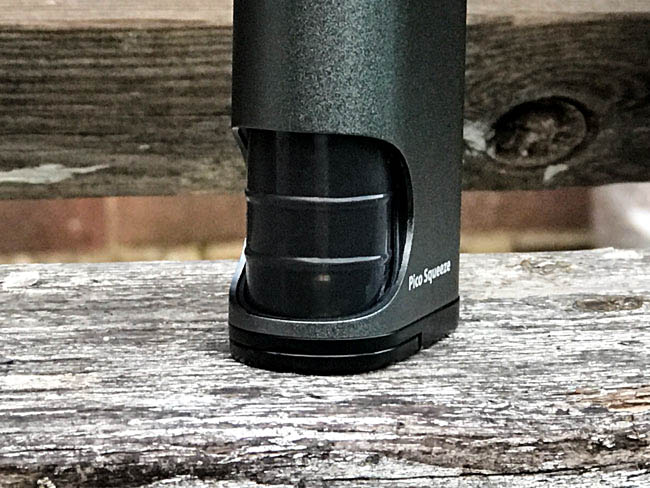 By purchasing the full kit, you’ll also get the Coral RDA which is a two post RDA with plenty of adjustable airflow. Interestingly the build deck can be removed from the base, as the Coral RDA can be stripped down fully to maintain, and this will give you a little extra space to build with. It’s certainly not going to win any awards for it’s looks, a stark black design with ‘CORAL’ printed in big letters underneath the airflow slot!

Overall, it’s so lightweight, even with a battery installed, full bottle of juice and an atomiser on top, and I believe it looks the part too. It’s easily pocketable and features some of the best form factor I’ve experienced from a squonker yet. 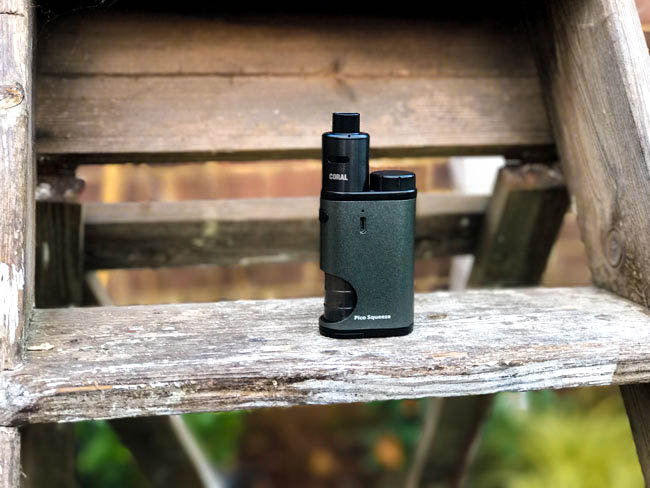 Performance and Using the Pico Squeeze

The Pico Squeeze is a very simple and easy to use device, designed to make squonking accessible to everyone. Essentially it performs in much the same way as a fully mechanical squonker does, with output power determined by how much battery voltage is left and the resistance of your build, and with a 50W max output. There are safety features built in however, unlike a fully mechanical squonker, such as a ten second cut off, no atomiser protection, short circuit protection, low battery voltage and a battery level indicator. Battery life I have found to be in line with what I would expect from a mechanical squonker, so battery life will vary depending on your coil resistance. I found it does hit just as hard as a mechanical squonker does too! 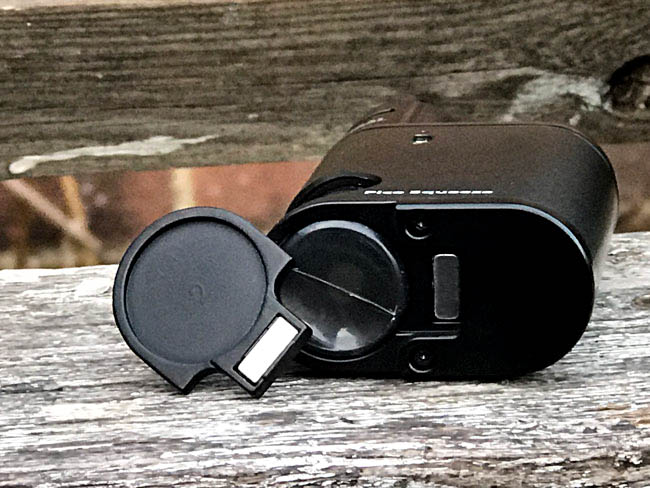 Included with the kit I got sent for review is the Coral RDA, and there are also two pre built clapton coils designed specifically for the Coral RDA. The included pre built clapton coils come out to 0.25ohm when installed, which is within my preferred resistance range when using an unregulated mechanical squonker. I did install these first off which was a bit of a fiddle, trying to get both coil legs through a single hole whilst keeping the coils correctly aligned with the airflow, but once done I wicked my build up with Kendo Vape Cotton Gold Edition, keeping the juice feed holes clear of wick, and filled up my bottle with some Cotton and Cable Baked Apple. I felt that with this build the Coral RDA offered a lot of airflow, and plenty of vapour, but very little in the way of flavour. I tried a couple of different builds, including a 0.35ohm SS316L dual coil build and a 0.3ohm Nichrome 80 dual coil and got the same results, which was a little disappointing.

Personally, I’d look into using the Pico Squeeze with a different atomiser to get the best out of it, I’ve had excellent results using mine with the Odis Collection and Design O-Atty as well as the Hellfire Havoc. As long as your atomiser has a bottom feed pin then you’ll be able to use it with the Pico Squeeze. Aside from the Coral RDA, the Pico Squeeze is a fantastic little squonking device, that offers performance on par with pretty much any mechanical squonker out there.

These days I’m really into my squonking, mainly with mechanical squonkers, I’ve owned and tried more than my fair share from low to high end and I truly do believe that the Pico Squeeze is up there with the very best, which is amazing when you consider just how cheap this little device is. It’s a device I pretty much always carry around with me now, as I’ve become enamoured with the form factor and performance.

Forget the disappointing Coral RDA for a second, Eleaf have worked wonders with the design of the Pico Squeeze, coming up with an ergonomically designed unit that offers performance on par with many of the best mechanical squonkers but with added safety features built in, that also looks, feels and above all performs absolutely great. If you are looking to get into squonking, or are a seasoned squonker looking for a new bit of kit, I’d highly recommend grabbing a Pico Squeeze, this is one of my favourite releases of 2016!