Today for review we have the Eleaf iStick s80 kit which is the iStick S80 mod paired with the GZeno tank. This was kindly provided to me for review purposes by TECC, and the following review is all my own thoughts and experiences.

The packaging is pretty standard cardboard packaging with a sleeve you slide off. Take off the top of the box, and there are the mod and tank sitting in a strong foam cradle. Underneath is everything else you need to get started with the kit as pictured below. 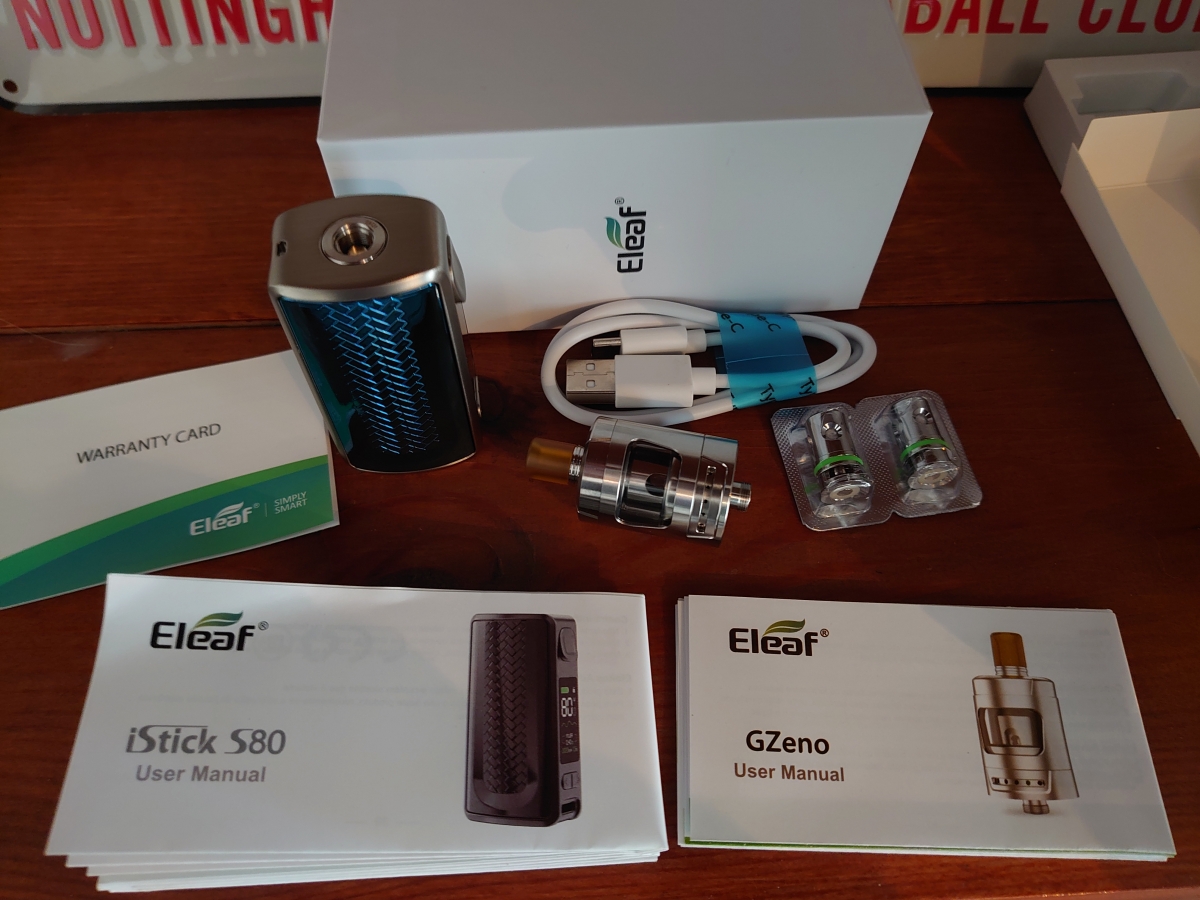 The kit comes in a range of colours: blue, red, rose gold, silver, and matte gunmetal. The gunmetal mod comes with the gunmetal tank, all the others come with the silver tank. I was sent the blue variant. 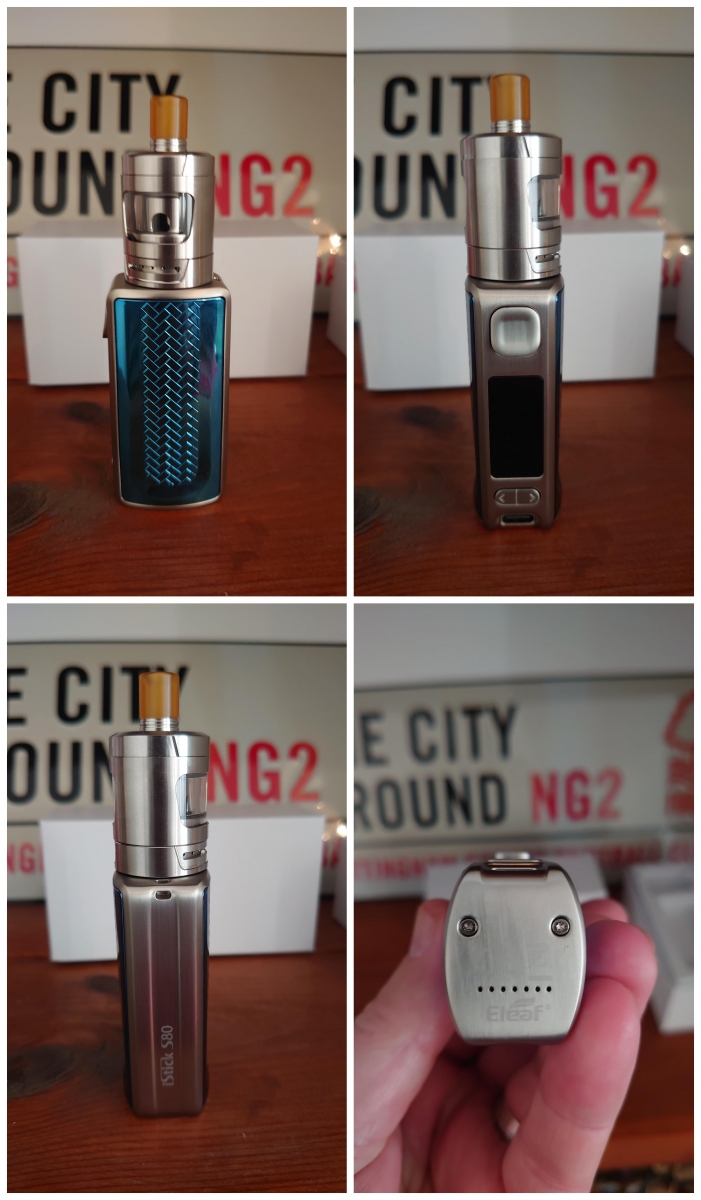 In a "Top of the Pops" style rundown, here comes the protections and specs:

When you take the mod out of the box, there are clear plastic films over the sides which easily peel off, and I was struck by how weighty it is. It’s not overly heavy, but it definitely has a weight to it and it feels solid and very well made indeed. The mod oozes class, I’m talking a penguin with a monocle wearing a tuxedo kind of class, and we all know there’s nothing classier than that. The side panels are a lovely blue colour with what they call an “intrecciato weaved design” which is reminiscent of parquet flooring. “Intrecciato” roughly translates into English as “Spiffingly Stylish”, but my Italian may be a little rusty. I was convinced that the panels would be a fingerprint magnet, but to my delight they absolutely are not and I enjoy stroking the panels when I vape, but maybe I need help. There are battery vent holes on the bottom, a spring-loaded 510 connector on top, a hook for a lanyard on the back, and then on the front there is the usb C port, the screen and the buttons. The buttons are all really nice to press, good and clicky yet sturdy, it’s an odd thing to like but I love the fire button on this, and pressing it fires it up immediately. 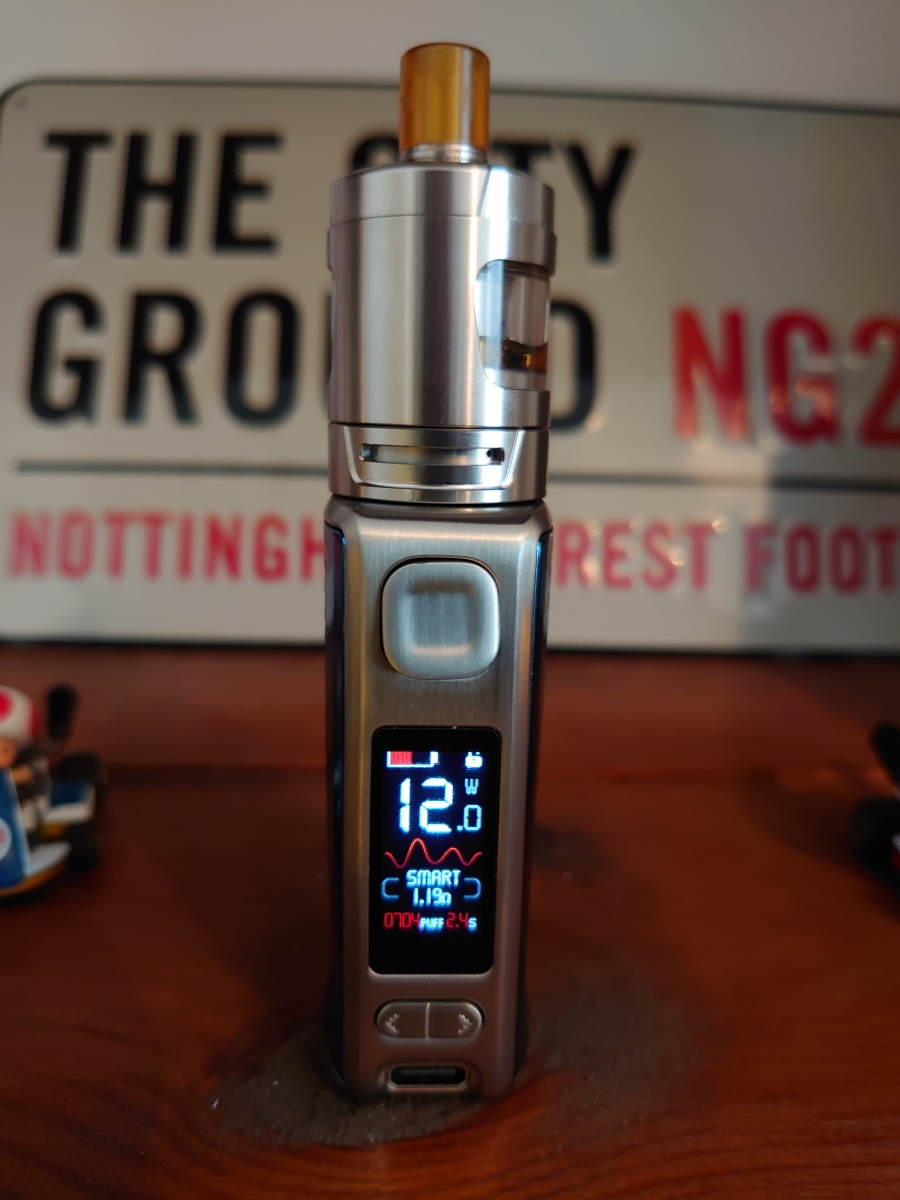 Powering the mod on and off is the usual five clicks on and five off, and three clicks locks the wattage up and down buttons. On the screen you can see a battery indicator, a padlock to show if the device is locked or not, the wattage, coil resistance (above which it will show “SMART” if the mode is turned on), puff counter, last puff length, and a wavy line which looks like a soundwave. This soundwave actually moves and behaves like you are tuning some kind of radio when you press the fire button. It made me want to see if I could send morse code messages using this, but alas it just moves around on the screen and pressing the fire button to produce a coded message on a vape device just makes people look at you like you’ve lost your mind and are not the resistance operative you imagine you are. The mod is a Variable Wattage only mod, no TC or VV and no bells and whistles, but there are some options to explore so, like Sir Walter Raleigh (who invented the bike, honest), let’s set sail.
The < and > buttons adjust the wattage up or down in 0.5W increments all the way up to 80W and down to 1W depending on the coil. With the supplied 1.2Ohm coils, it will only go as high as 20W, but with a tank with a 0.15Ohm coil it will indeed go all the way up to 80W. Pressing and holding the < and > buttons together opens the options Menu to reveal six options: 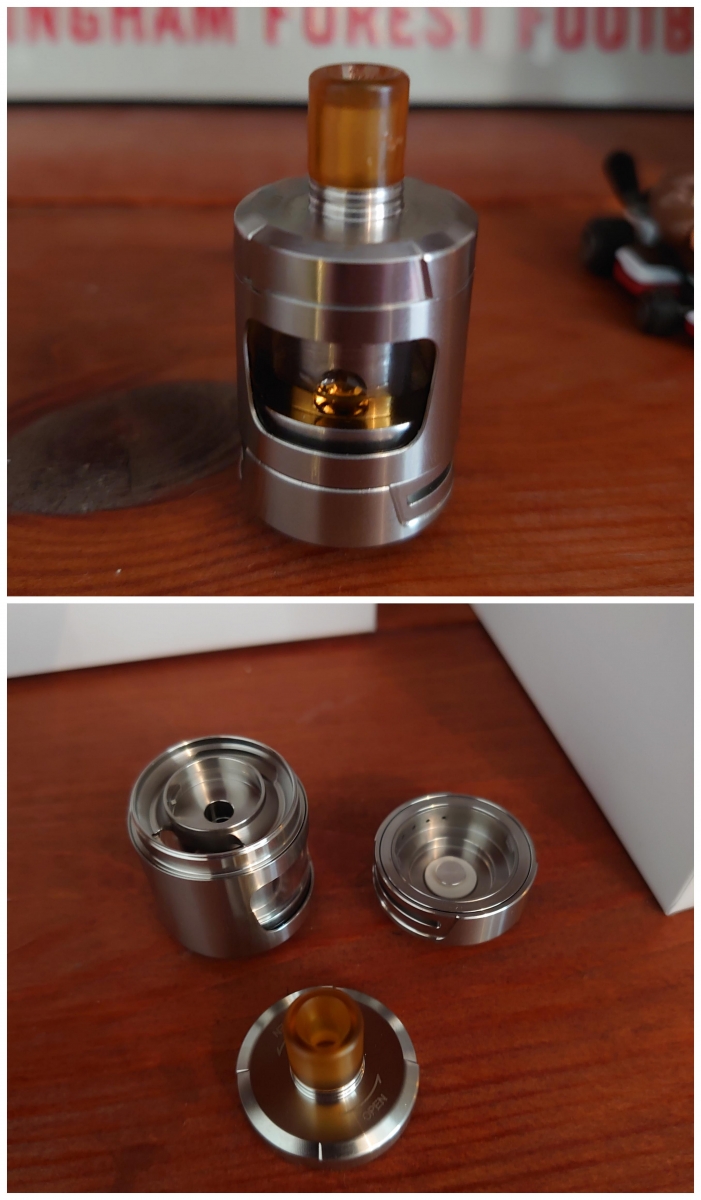 As you can see, the tank bears more than a passing resemblance to the Zenith and Zlide tanks. Just like the mod, it feels weighty, solid and well made. There are three main parts to the tank, the base/airflow control, the main metal/glass tube, and the top cap. To fit the coil, you unscrew the base, well, it’s more of a turn and there’s a little latch rather than any threading. The coil then just pushes into the main part of the tank and you screw the base back on. The coils themselves were easy to fit as they are just push and pull, but the base I found a little fiddly at times. The base also has the airflow ring which is nice and smooth, and glides easily when you turn to adjust. To fill the tank, you twist the top cap and pull it off to reveal two kidney shaped fill ports which are long but not particularly wide and have a lip in them. It’s a little awkward, but I managed to fill without any problems even with wider spouted bottles. Just take it slowly, and you’ll have no problems. However, as I don’t have three hands, I’m not a fan of tanks where the top comes off. I have to hold my liquid bottle and the tank, so where does the top cap go? I have to put it down somewhere or hold it awkwardly in the hand I have the tank or bottle in, not ideal when I’m on the move. The drip tip is ultem, it is nice in the mouth and offers a comfortable draw and doesn’t get hot. However, the 510 drip tip placement is raised. 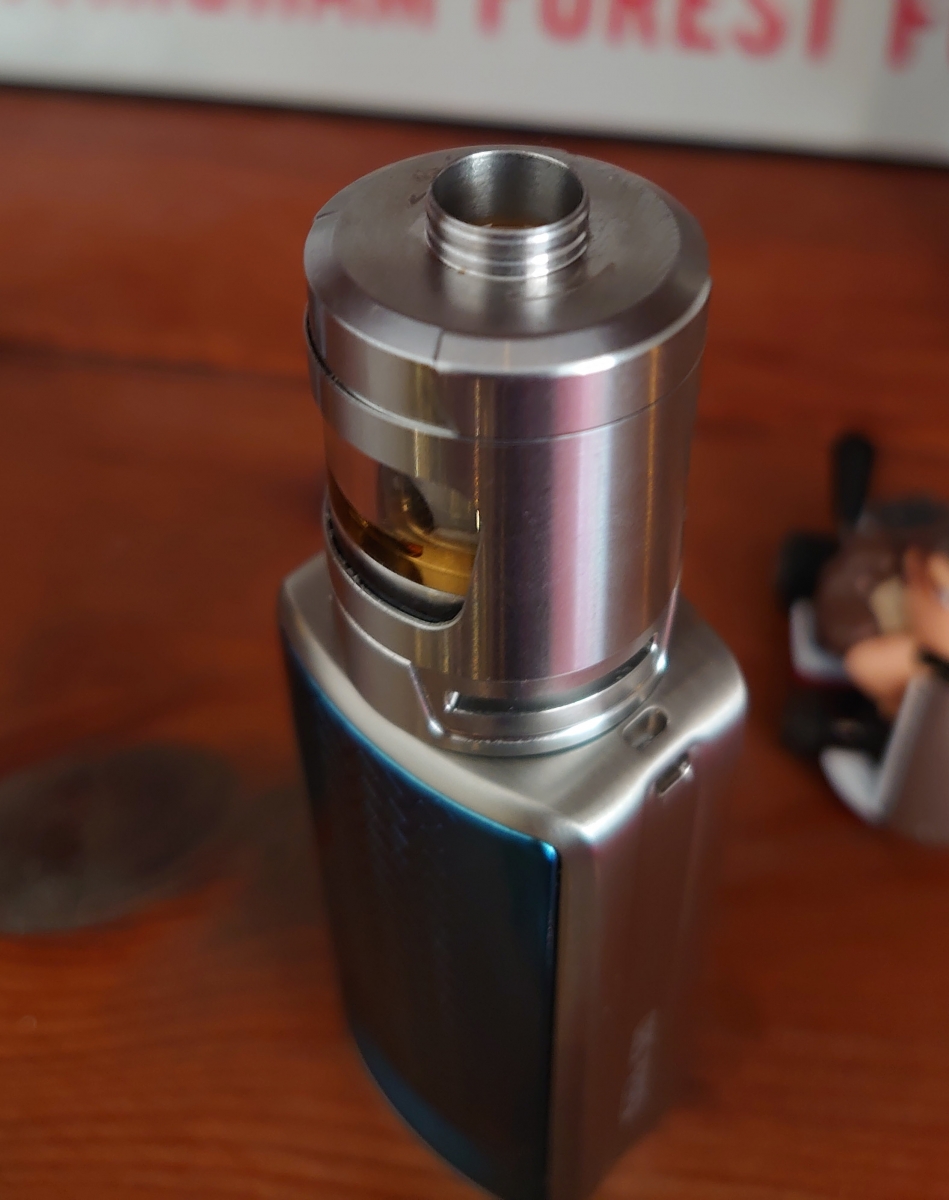 This means that if you want to use you own drip tip, it will have to be pretty much straight or there will be overhang. Why this raised part was added I don’t know, the only raise I like is a pay raise, I’m worth it you know! One other point to mention is that when unscrewing the tank from the mod, make sure that you grab the tank by the base section, otherwise you can start to unscrew the tank parts and can end up with the base still on the mod but the rest of the tank in your hand, not that this happened to me of course, oh no, not at all.

So, that’s a quick tour of the device but I know what you’re thinking, will he be using this kit for a long time to come or will ELeaf it alone? (That was terrible even by my standards, but I’m not even sorry).

Device fully charged, I was all set. The coils have a nice recess to the cotton so priming is simple, I primed it with some of my test liquid (Unicorn Shake), and off I went. I had the SMART mode turned on (it is by default), and when I screwed the tank on it told me the coil was 1.19Ohms and that the best wattage was 7-13W then set itself to 10W. With the supplied coil, it wouldn’t let me go above 20W and I actually found the coils performed best at 12W. Taking a draw with the airflow wide open was a very loose draw indeed, so loose I could get a restricted direct lung draw out of it. I gradually shut down the airflow bit by bit until it was fully closed and it was still too loose for my liking. Even fully closed, you are not getting anything but a medium MTL draw from this tank. The flavour is good but there’s just too much air there. For someone looking for a true MTL draw or for a new vaper looking to get a cig-style draw, this is not the tank to go for. I tried various liquids in the tank and both of the supplied coils, and the result was the same. It’s like there is air getting in from somewhere other than the airflow control ring which is causing it to be so loose. If you look closely at the tank, there’s a small gap between the main section and the bottom section which I suspect is where the air is coming from. I also experienced a small amount of leaking underneath the coil whilst I was using it.

That’s the tank, now the mod. Put quite simply, the Istick S80 is a total and utter delight, it’s superb. It’s not the most complicated mod, and it doesn’t have a huge amount of settings, but what it does, it does brilliantly. It feels great in the hand, it fires instantly, the screen is nice and big and a good brightness so it’s visible in even the brightest sunlight, it shows everything you need clearly, and I like that the last puff duration stays on the screen until you take the next one rather than drop to 0s almost immediately. I’ve thrown various tanks at this including a Baby V2 with 0.15Ohm coil and a Fireluke22 with a 1.5Ohm coil, and I’m thoroughly impressed. It’s worth noting that it will take a 24mm tank and will look good, but any bigger and you’ll start to have overhang. With the 1800mAh battery, I was getting a full day and a little more for MTL at 12W, and it charges from empty in about an hour whilst also supporting vape whilst charging. At higher wattages, you’re not going to get a full day out of this but you’ll get a good few hours. That fire button I would press again and again even if pressing it meant I got Rickrolled every time. 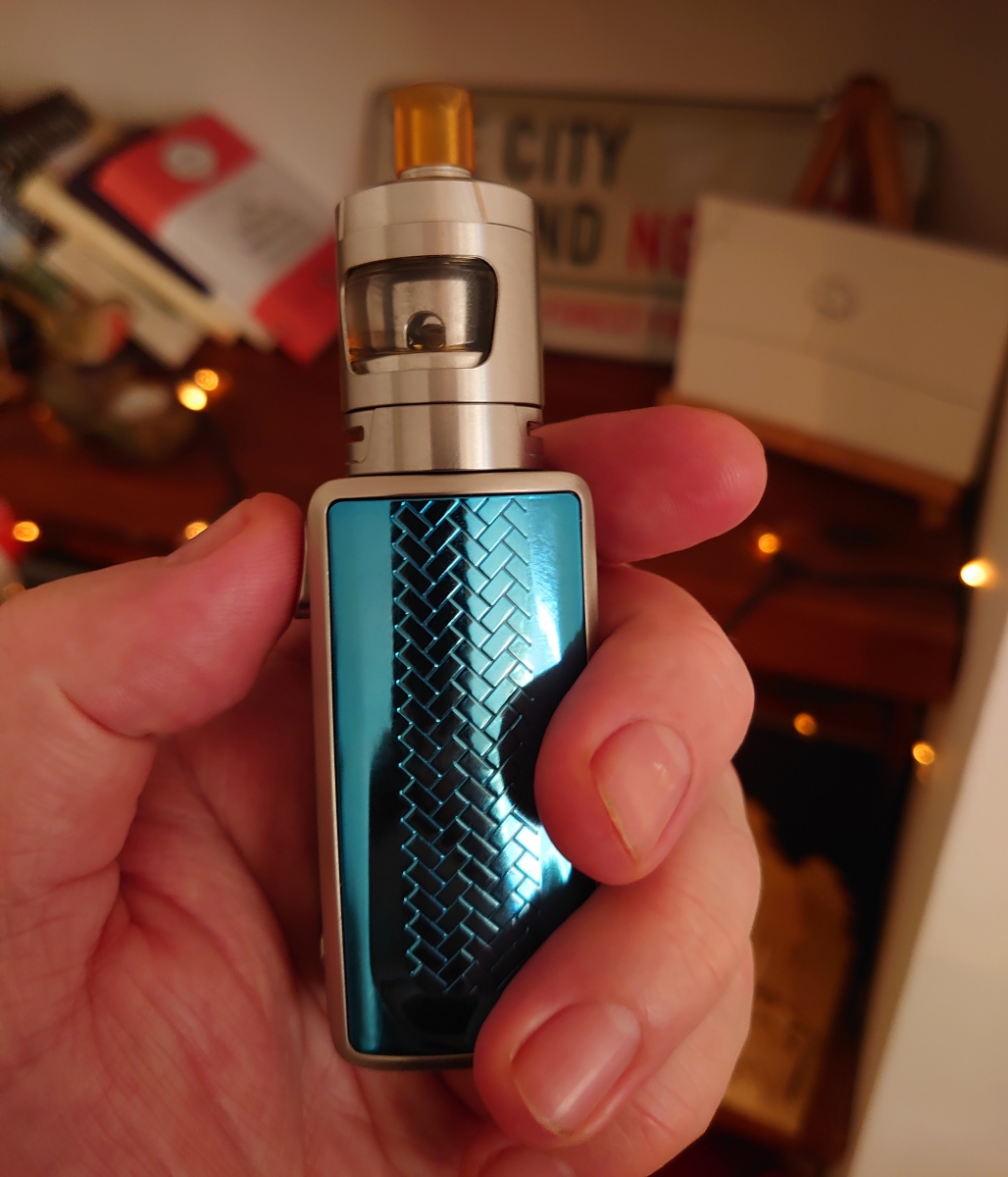 The kit is a bit of a tale of two halves really. The tank, whilst sturdy and sleek, just doesn’t perform well enough for me. The flavour is good but not superb, and the draw is just too loose. I like the drip tip and whilst I like the idea of the twist and release way the tank is put together, in reality it just didn’t click for me.

The mod is another matter entirely, it’s well made, it’s good looking, it’s unfussy, and does what it does with aplomb. It fits nicely in my pocket, I know it’s going to last me all day for MTL, and have I mentioned that fire button? My name is Tim and I’m a button clickoholic. If I was being picky, I would say I prefer a battery % to a bar, but that’s just a personal thing. If you want a wattage only mod, then I cannot recommend this highly enough. It’s nearly as classy as me and it performs flawlessly.
This has quickly become one of my favourite mods and is in my daily rotation now. Pair this with your favourite MTL tank, and you’ll be one happy vaper, it’s a knockout.

Many thanks to TECC for sending in the Eleaf IStick S80 kit to review. 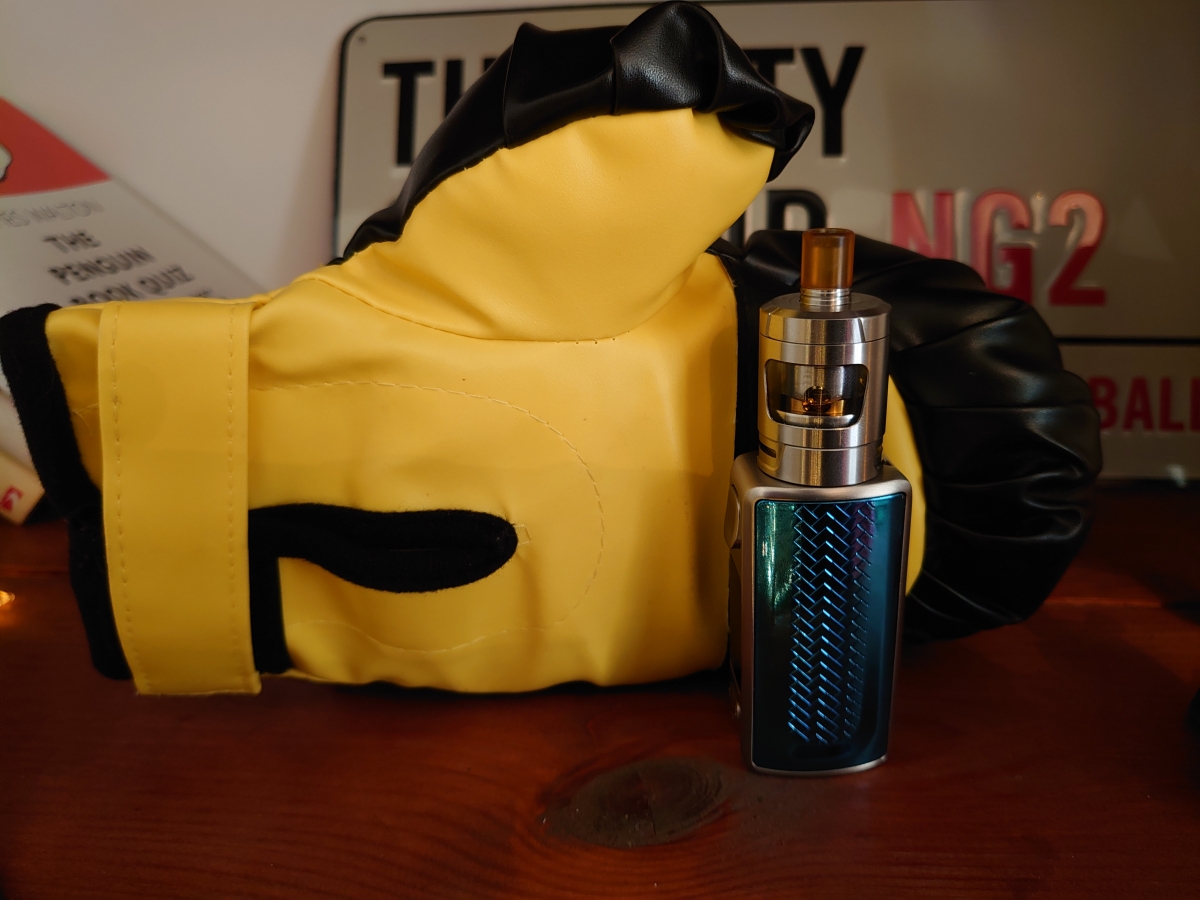