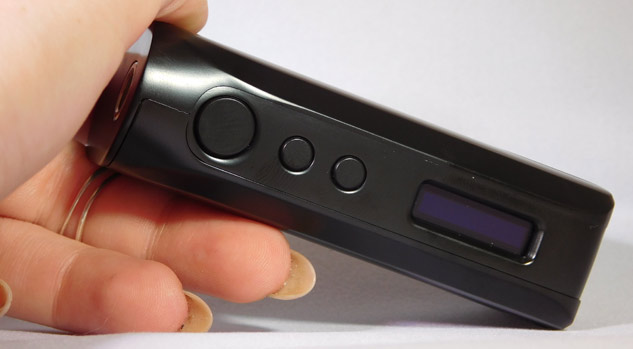 Introduction to the IPV D2

The latest addition to the stellar Pioneer4You stable is the IPV D2, the natural successor to the IPV Mini 2, featuring an even smaller form factor over the IPV Mini 2, budget price, a 75w output, temperature control, a sliding ball bearing battery door cover and the YiHi SX130H chipset that can support Titanium coils as well as nickel ones along with resistance down to 0.05ohm in temperature control mode!

In the rivalry between Pioneer4You and Sigelei, Sigelei stole ground on Pioneer4You with the release of the excellent Sigelei 75w TC, the first ‘mini’ temperature control mod release from either manufacturer, withthe IPV D2 coming out shortly after. 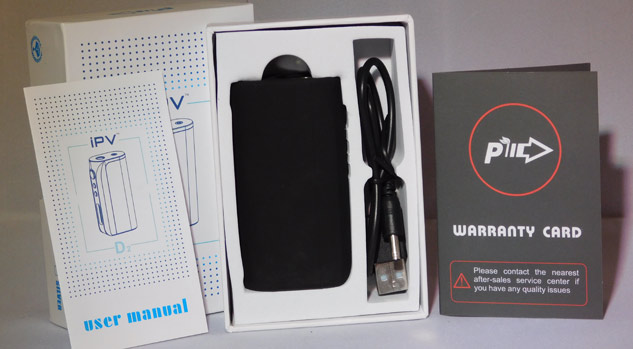 One thing of note is that the IPV D2 does not contain a micro USB port, therefore the firmware is not upgradeable, and also charging direct on the mod is not available either. To charge the IPV D2 using the supplied cable you need to use a compatible DC4.5V-DC5.5V/1A charger. If you don’t have access to one, or are unsure which charger will be compatible, then remove your battery to charge to be on the safe side. With the ball bearing battery door it is easy to swap batteries in and out.

Constructed of billet aluminium, and sporting arguably the smallest form factor out of any mod I have held, I have to say it’s a little stunner. It’s deceptively small as well, smaller than the palm of my hand, and when I pair it with the Freakshow Mini RDA or the Goblin Mini RTA I have got a great little stealthy mod for out and about use! Pioneer4You have also included a silicon sleeve with the IPV D2 so you can protect the great paint finish against any nicks or scratches. The IPV D2 is presently available in black however a silver version is also in the pipeline and available soon.

It’s 23mm width at the top, which is going to annoy some users with the tiny gap you will end up with at either side of a 22mm atty, but the stainless steel threaded spring loaded 510 connector works like an absolute dream and I have never been left with a gap between the IPV D2 unit and any of my atties I have used with it. Battery door cover runs on ball bearings and it allows for quick and easy access to the battery compartment, you will need a separate 18650 battery inserted positive end downwards to use the IPV D2. OLED screen at the side is easy to read and bright, offering the usual information on battery life, resistance, power and temperature limit.

The buttons either side of the OLED screen are a dream to use, they are large enough to use easily on a mini mod, I have not noticed any clickiness from them or had any issues at all with the buttons sticking or not registering an input.

It’s the same style of menu found on any of the latest releases containing a YiHi chip, but simplified. The menu is accessed by pressing the power button 5 times whilst the device is on. The first option is System Off, which turns the IPV D2 off with a press of the up or down button. Next off you can switch between power and joule mode - power mode is standard variable wattage mode, joule mode will allow you to use the IPV D2 in temperature control mode, in conjunction with a compatible Nickel or Titanium coil. 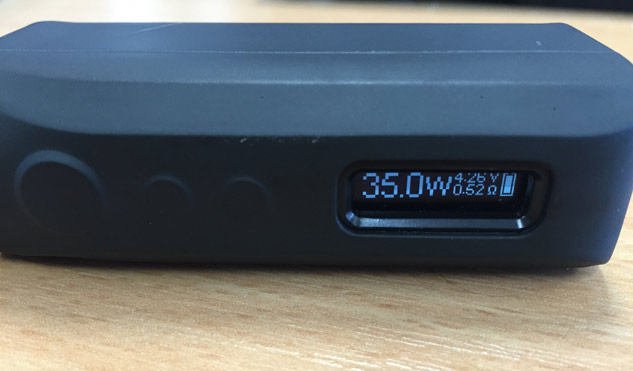 To switch the IPV D2 to temperature control mode in the menu system keep clicking the power button until ‘Power Mode’ is displayed. Press the up or down button once to adjust this to ‘Joule Mode’, and you are now in Temperature Control mode. Pressing the power button again will allow you to adjust whether you want the temperature displayed in centigrade or fahrenheit, another press of the power button will allow you to adjust the temperature limit, a further press will allow you to select whether a Nickel or Titanium build is to be used. This must be set correctly! Once all of that is done, hit exit and you will finally need to get the IPV D2 to take a baseline resistance reading of your coil, for optimum accuracy you want the atomiser and mod to be at room temperature. Hold down the up and down buttons and the base resistance reading will be set, and you are ready to use the IPV D2 in temperature control. Power is adjusted via the up and down buttons when on the main screen and out of the menu.

I’ve seen a few people online complaining that the IPV D2 does not lock the resistance of a coil in temperature control, to explain this it’s not a fault with the unit, first off the IPV D2 takes a baseline reading of the coil resistance when holding the up and down button, however what it also does is provide a real time resistance reading on screen, hence why your resistance changes, as coil resistance with nickel and titanium does fluctuate quite substantially when in use. This provides you with a very accurate experience in joule mode, and I have found it to be one of the best performing mods I have used in temperature control!

With the new SX130H chipset included, Titanium coil support is available as well as Nickel and coil resistance in temperature control is supported right down to 0.05ohm, which means you don’t have to use as many wraps with your Nickel or Titanium builds, one of the benefits of that being that your coils can ramp up much quicker with less wraps present. I have a Goblin Mini with a single coil 0.06ohm Ni200 build that I previously used in with my SX Mini M Class, and it performs just as well on the IPV D2 as it does on the SX Mini M Class. I’ve been getting a lovely vape with nickel at 35-45J and the temperature set at 230C, and with titanium at 40-50J and 250C.

One thing of note is that there is no voltage step down supported with the IPV D2, and from what I can see there are no plans for voltage step down to be supported with future IPV D2 releases either. There’s a workaround out there online for it, which essentially involves using kanthal coils in joule mode (surprisingly it works- you won’t get dry coil protection with a kanthal build though!), it’s not a huge deal breaker for me, as I don’t tend to fire 0.3ohm coils at 10w, but each to their own and all that... 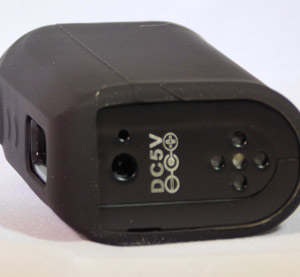 I seem to get much better battery life from the IPV D2 than I do from the Sigelei 75w TC, which required anything up to 4 battery swaps a day eventually depending on how heavily I used it. Now I seem to only need to swap the battery a max of twice a day with the IPV D2, suggesting the chip is more efficient than the one on the Sigelei 75w TC, and this is made easy with the ball bearing battery door. At 30-40w or 35-45J and 230C I can get over half a day's heavy use out of one battery in the IPV D2, and near enough a full day when using the IPV D2 moderately in rotation with another mod.

You can use up to 75w with the IPV D2 in power mode, don’t expect your battery to last too long at that sort of power however! I have found that the power I have at my disposal with the IPV D2 to be ideal for when using the IPV D2 at home with one of my RDA’s. Up to 50J is available with joule mode in temperature control, which is more than enough for most users in temperature control with Nickel however a little limited if you wish to use an RDA with Titanium for example.

Overall, the IPV D2 performs superbly well in power or joule mode, providing an accurate output (providing you aren't under 3.2V) and it’s been really reliable and consistent for me.

Comparing the IPV D2 to the Sigelei 75w TC, I’ve got to say that Pioneer4You’s offering wins out ever so slightly here. They are pretty much even when it comes to performance in temperature control, though the Sigelei 75w TC offers more power in this mode, the IPV D2 supports Titanium out of the box, and the Sigelei 75w TC does support micro USB charging on the move, however with the IPV D2 I believe the form factor is better, it just feels so small in your hand, the buttons are far more responsive and less clicky, the SX130H chipset seems to work more efficiently than the in-house Sigelei 75w TC chip as I seem to get more battery life than the Sigelei (which was requiring up to 4 battery changes a day), and the IPV D2 is slightly cheaper!

It’s my mini device of choice because it performs fantastically well, the vape is as good as anything around when in temperature control mode, and ergonomically it is just excellent. It’s a real tiny little thing that is just ideal for me to use at home, or if I’m nipping out for a couple of hours I find myself reaching for the IPV D2 to take with me. I wouldn’t recommend it for all day use as a main mod for those that vape pretty heavily, as you will need to swap the battery at least once a day, but it still would make a great addition to your mod rotation if you do vape pretty heavily, and moderate vapers will get on really well with it as they should manage a full day’s battery life from the IPV D2.

All in, the IPV D2 is an excellent unit, sporting a very efficient YiHi chipset and packing a punch that belies its size, if you love your mods to be powerful with a small form factor then the IPV D2 is the mod for you. It’s got everything you need at under £50!

The IPVD2 unit was generously supplied for review from www.cvapor.com, the price of this unit has come down considerably over the last month or two, you can now pick up the IPV D2 for a $45 - about £30, outstanding value for money!