Supplied by those friendly folks at Sourcemore for review:
https://www.sourcemore.com/digiflavor-z1-sbs-kit-with-siren3-gta.html
You can get your hands on one for $51.18 using discount code: Z1SBS 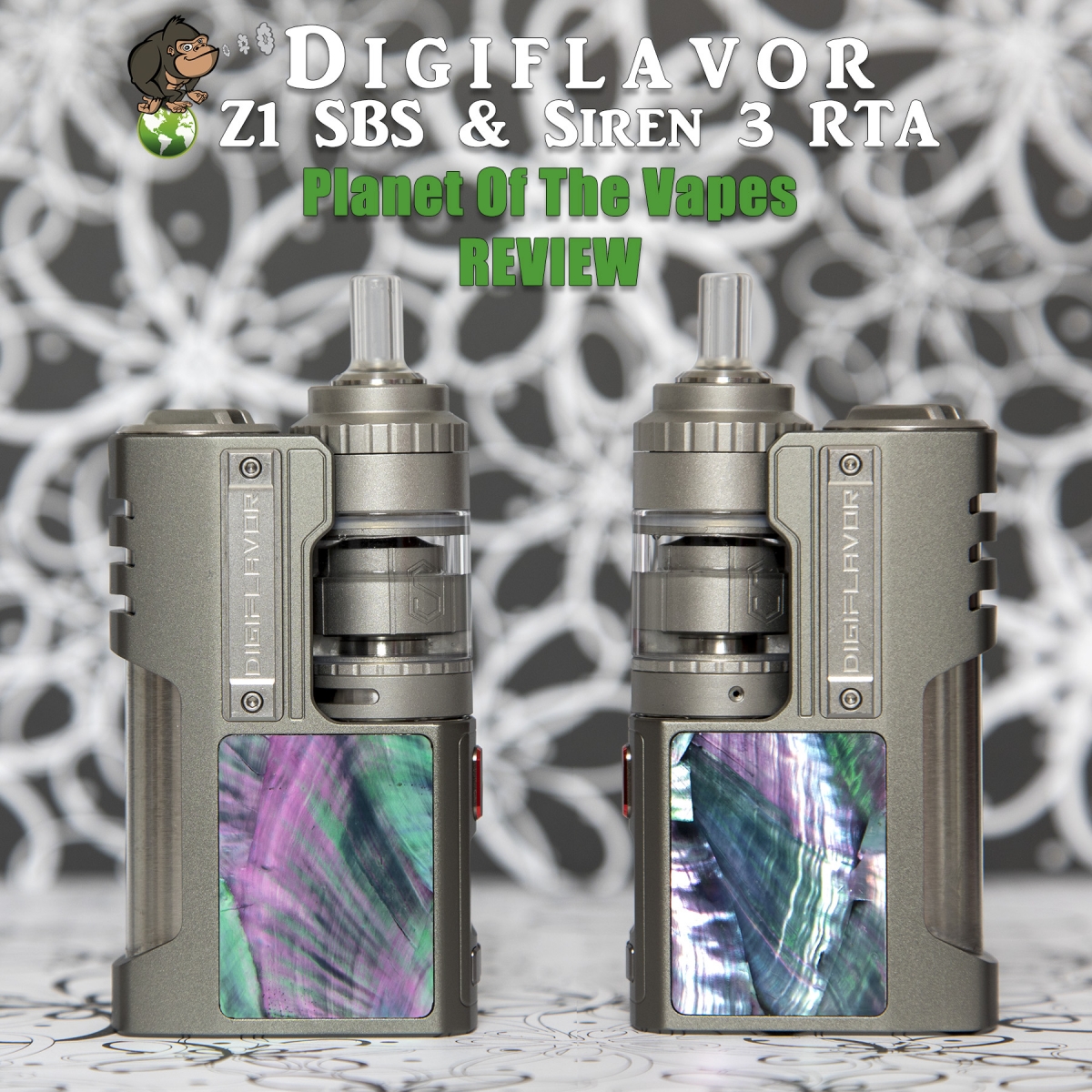 I’ve been looking forward to getting my hands on one of these ever since Digiflavor teased us with a preview. Now I have finally got my paws on one, so did it meet my high expectations?

The Z1 and Siren 3 RTA kit comes in a three piece box: an outer sleeve and a strong two piece inner box. 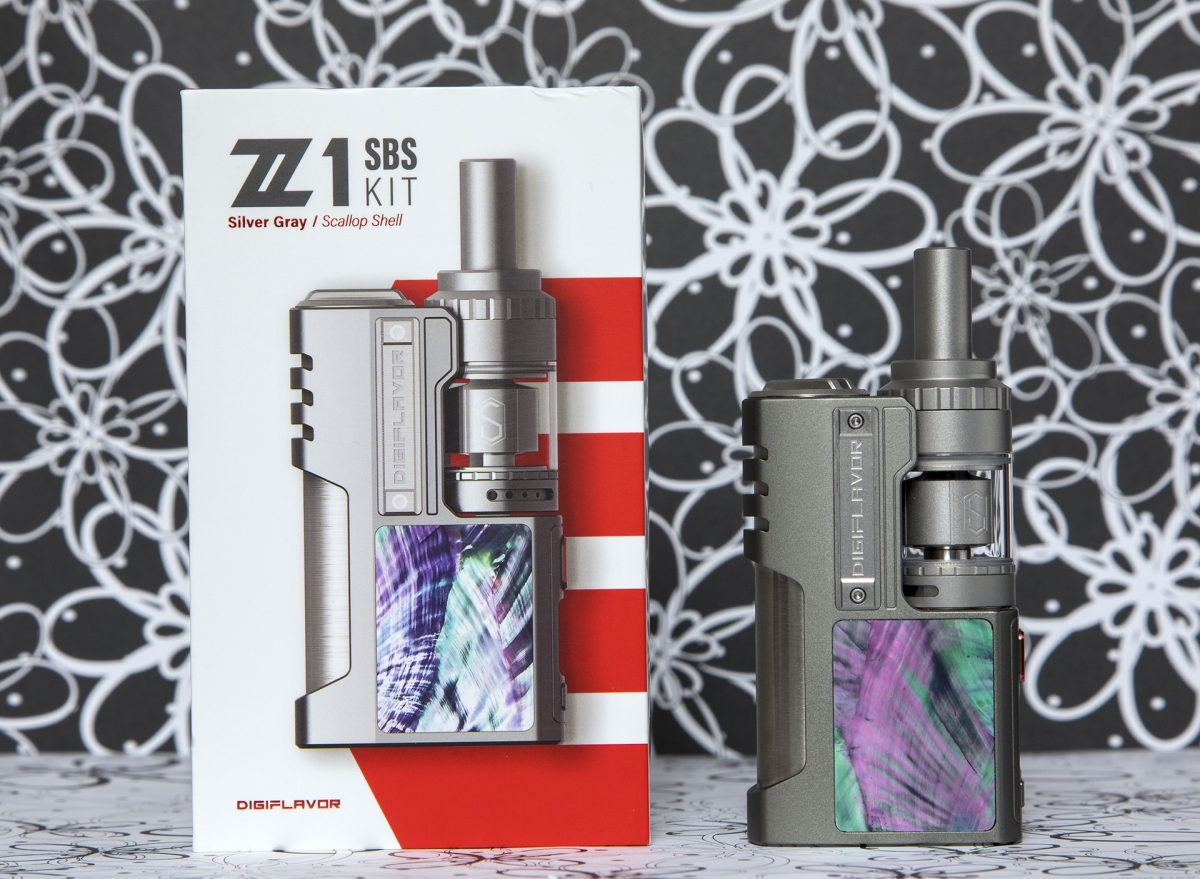 I was surprised by the size of the box the Z1 kit came in, more the depth than anything but when you see all the goodies you get with this kit then it all makes sense. 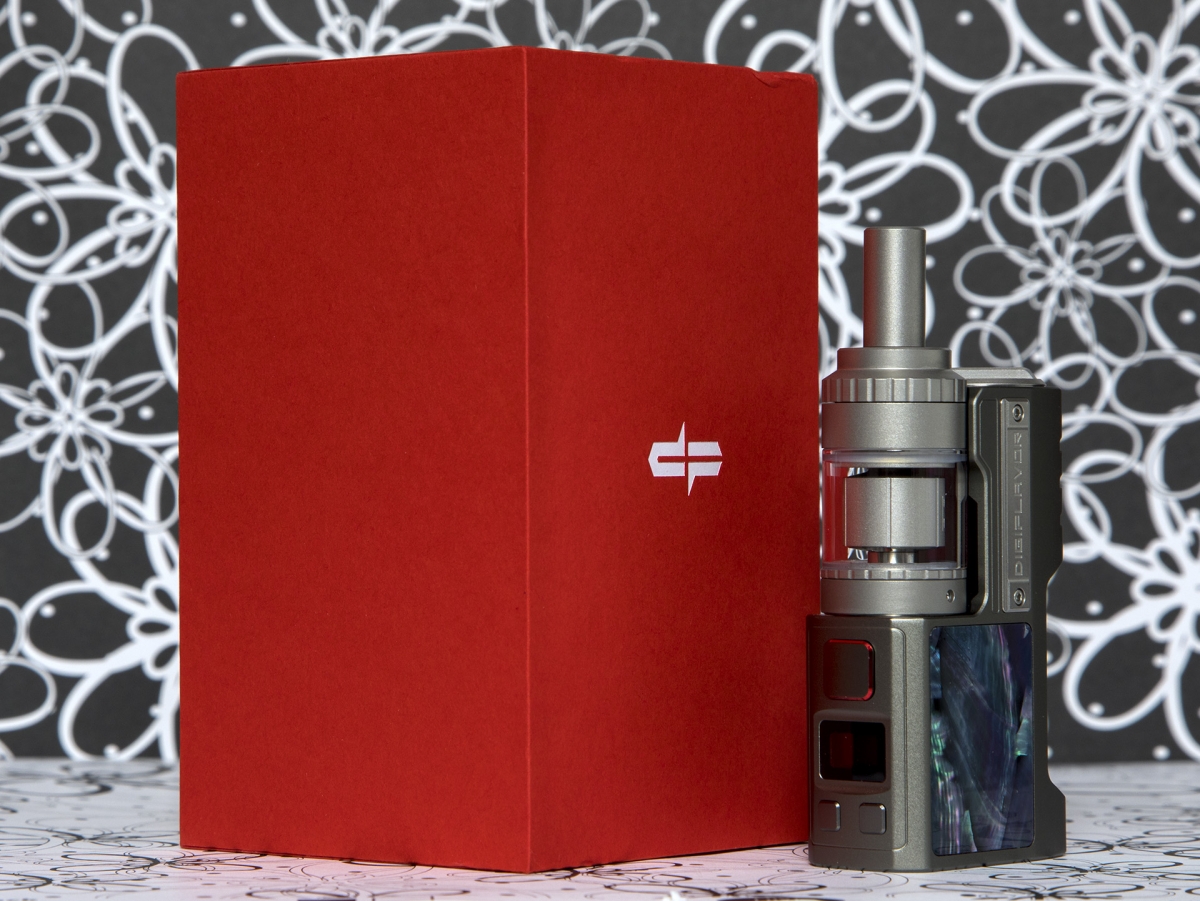 As you can see from the photo, the box dwarfs the Z1. 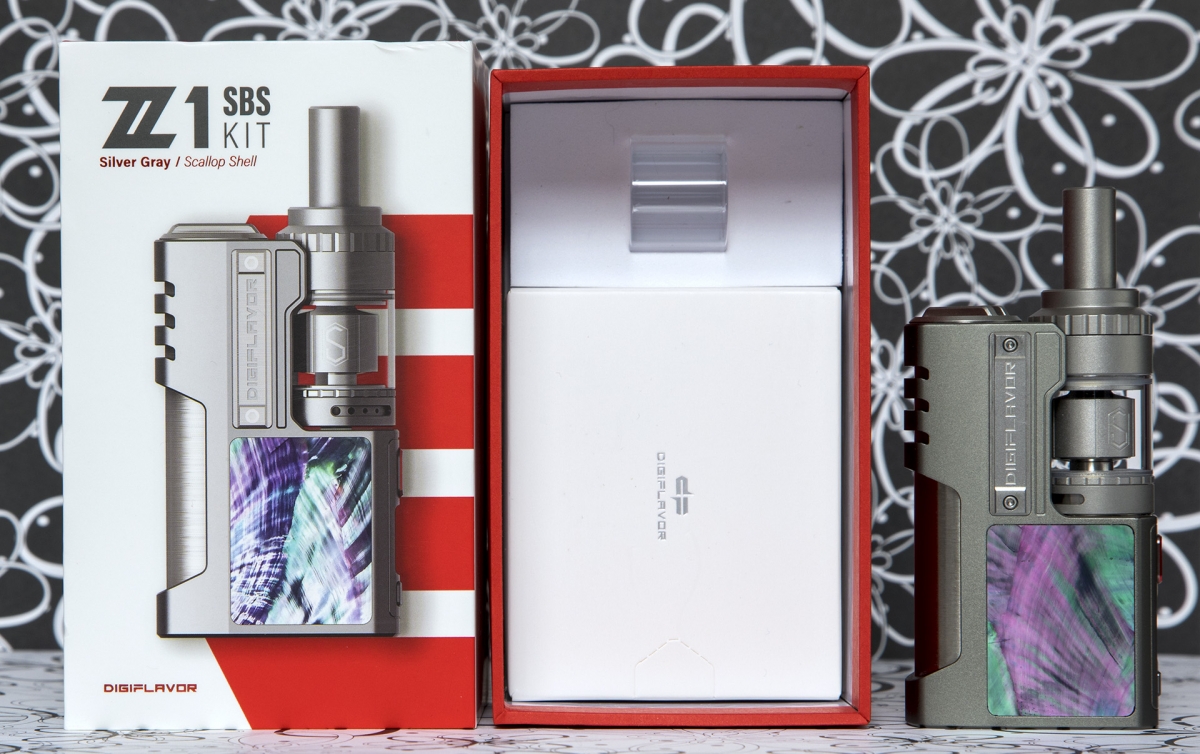 The mod and tank are in the top layer with a white foam insert which holds it in place perfectly, underneath are the documents, then a spare glass piece and a mystery box. 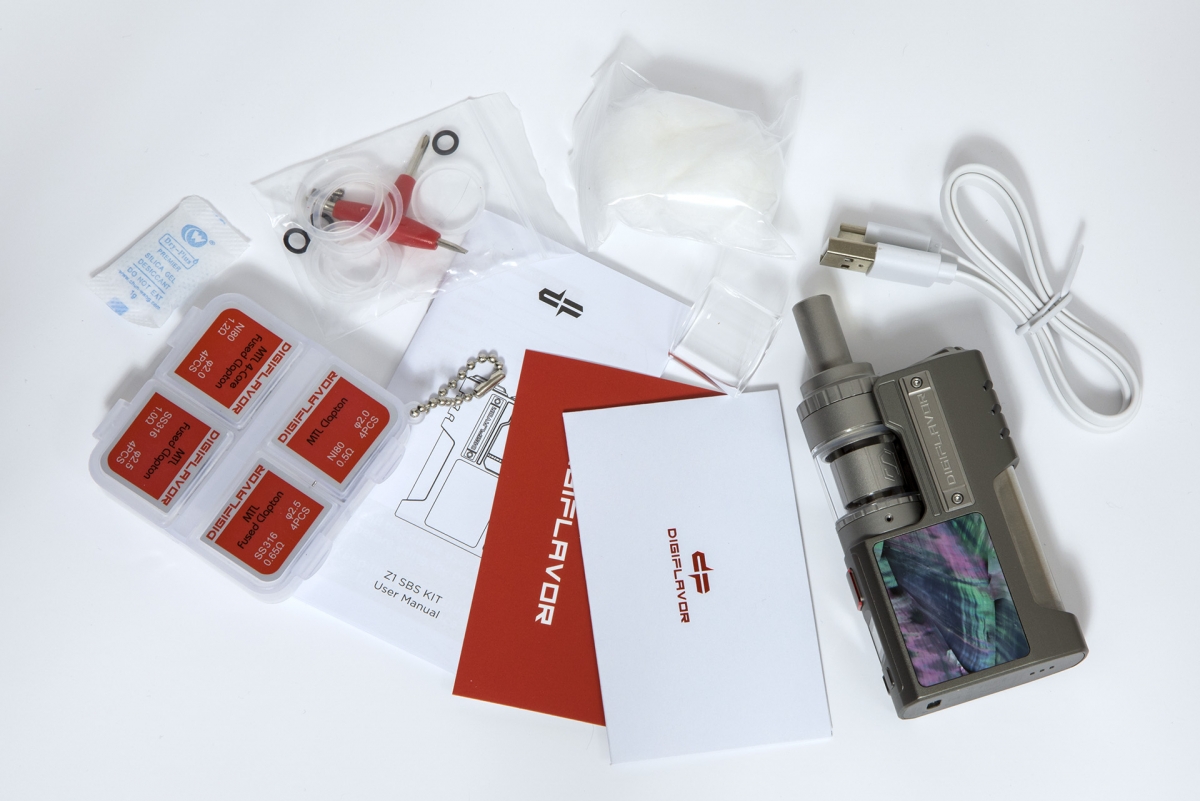 The contents are pretty much what you would expect, spare seals, USB-C cable, tri-tool and spare screws but the biggest surprise was the cool box of coils, there are 4 types of Clapton and 4 of each plus you get a big bag of fluffy cotton – very nice!

The Digiflavor Z1 kit is surprisingly light, especially the mod. Even with a battery and a full tank, it weighs just under 220g. It feels solid and very well made, and it feels really good in the hand. The colour was a little darker than I was expecting, it’s somewhere between silver and gunmetal and has a really nice satin finish which feels more grippy. 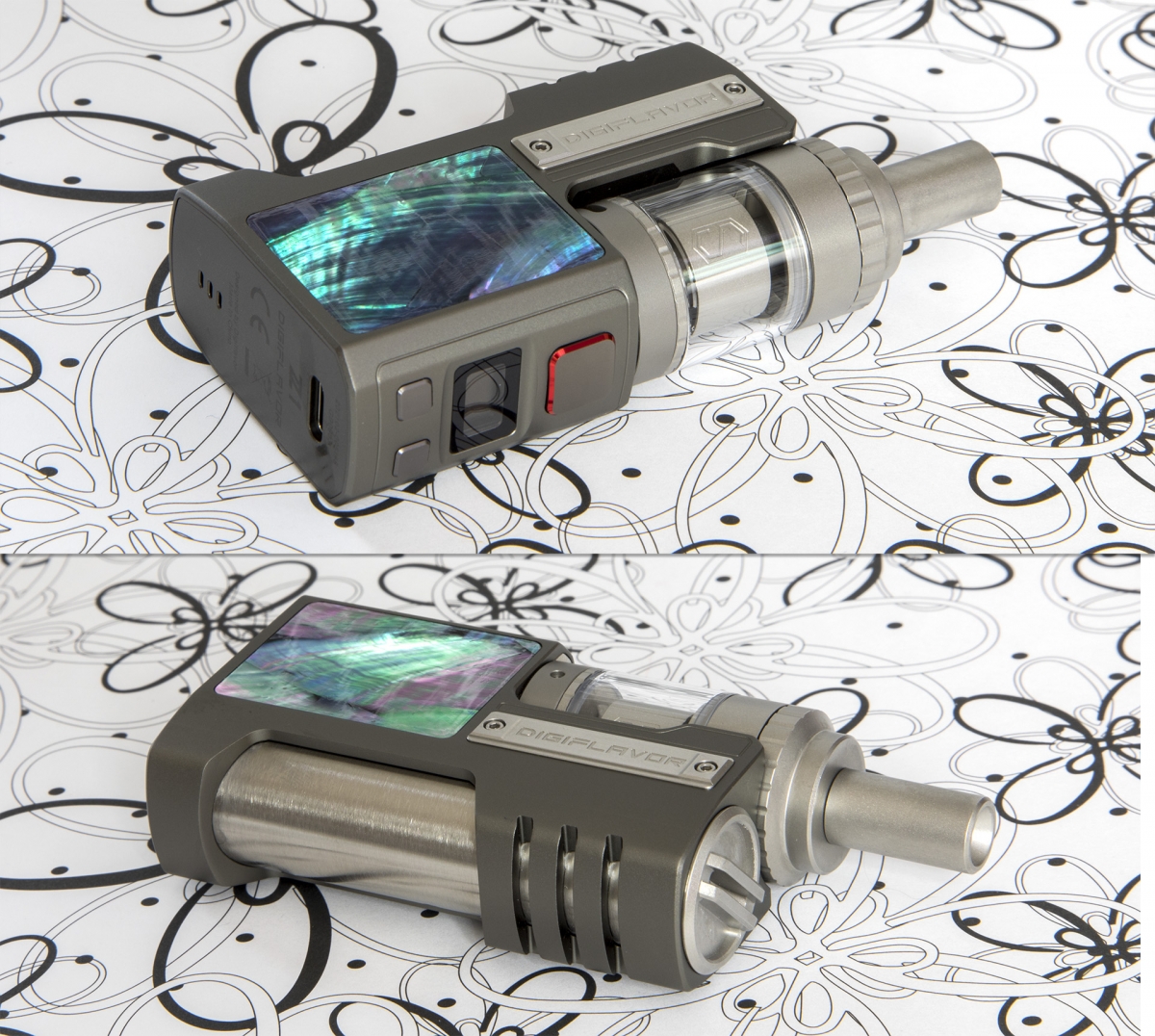 I absolutely love the styling. From the pre-launch photos, the shape and details really appealed to my taste and it looks even nicer in real life. Every face has some nice detailing, and the scallop panels look that little bit different.

There’s only one thing I wasn’t keen on; the silly looking funnel. As far as drip tips go, this is one of the daftest I own. Fortunately that’s a simple fix as it has a standard 510 fitting.

A slight niggle is the protective finish of the scallop panels. Upon first look it appears like they have a protective film which should peel off, but I couldn’t peel them off no matter how hard I tried. Unless I’m being a complete drongo, this must be the actual finish which isn’t very good quality compared to other panels I have seen. You know when you get specks of dust under a phone screen and it causes little bumps? Well that’s what I had on mine. I’ve classed it as a niggle as it actually didn’t bother me as you have to look really close, and they feel pretty good.

I really liked the way that the ‘DIGIFLAVOR’ side tags are separate and screwed in place, it really adds to that industrial look. The fire button has a nice smooth feel to it and I like that the edge is finished off in red. The control buttons are really mushy but in a good way and they take a full deliberate press to work which makes it pretty pocket friendly and tricky to accidentally adjust. 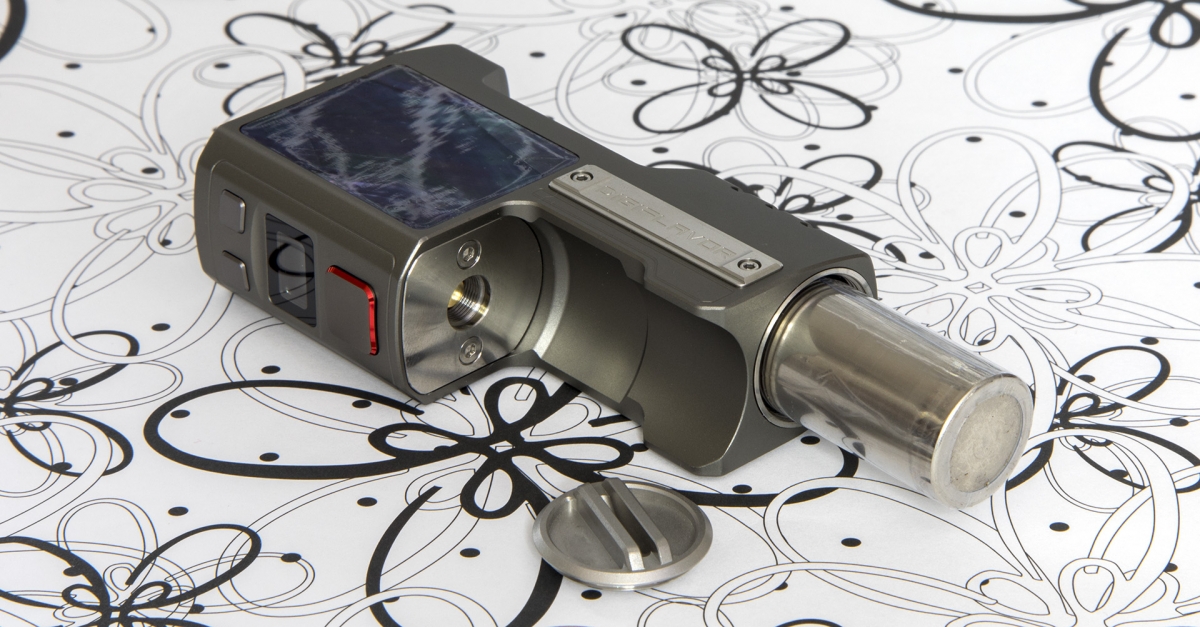 The Z1 mod takes a standard 18650 battery which is straight forward to fit. The only thing worth mentioning is that the cap is a short thread which makes it a bit of a faff to refit it (a turn counter clockwise until it clicks into the thread helps). If you intend to recharge the battery in the mod, then this becomes a really minor niggle.

The Siren RTA is a new one on me so I cannot compare it to the previous versions, but the styling suits the mod perfectly. Even the daft funnel drip tip does actually suit it to look at it and, too be fair, it is a nice narrow bore and vapes well. It’s only when you hold it in your hand that it becomes a ‘just NO!’ and it was the first thing I had to change. 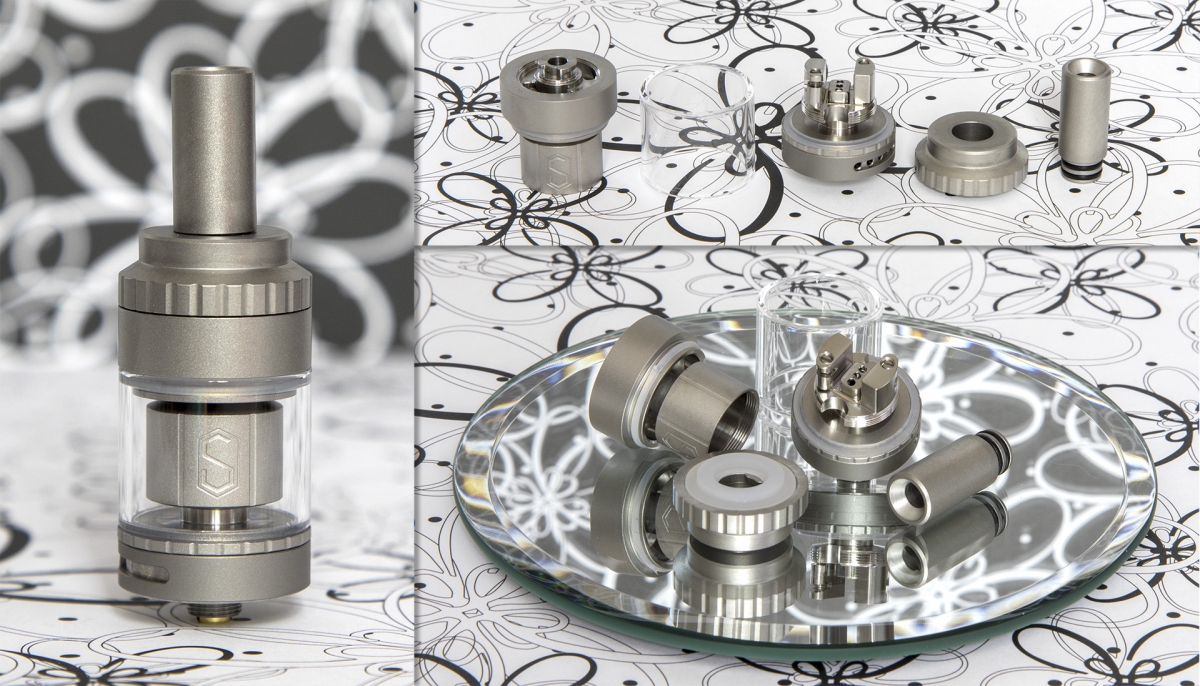 It strips down really easily and the threads feel nice quality, there’s no raspy threading throughout. The build deck is easy to build and wick, it’s really forgiving and has plenty of room.

The 24mm diameter will put some people off as a standalone RTA but it suits Z1 mod perfectly, as snug as a bug in a rug. I’ve tried a couple of 22mm tanks on the mod and they don’t look anywhere near as good as the Siren 3. 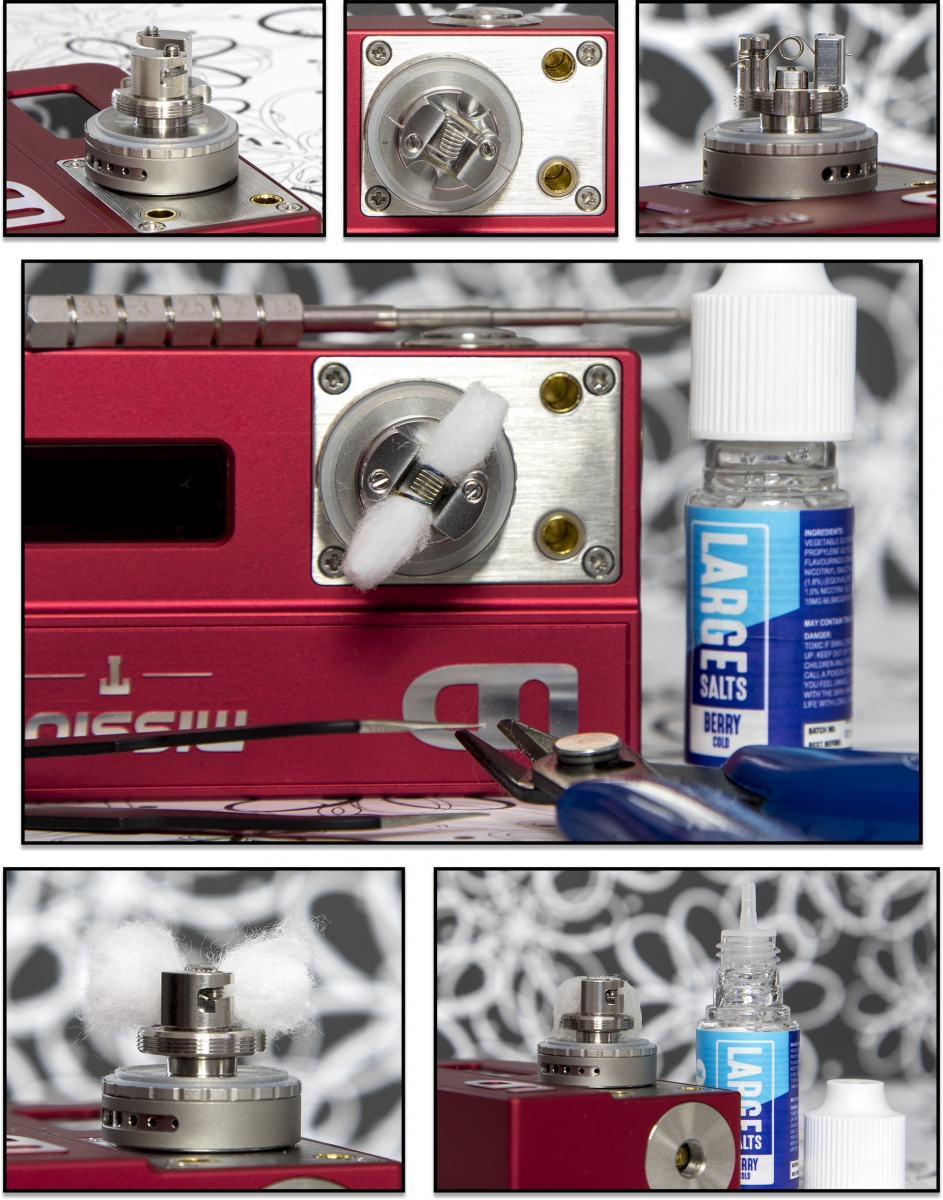 The included coils were a bit of an odd choice though. They are all wrapped opposite to the way the posts accept them, so you have to flip them upside down which makes the coil centre far too low and needs a little more work to position. The other strange thing was that two of the coil sizes were 2mm inside diameter. Though I often use 2mm coils, I wouldn’t on this RTA as the wicking will be too thin, 2.5mm is just right and it can also take up to 3mm comfortably.

That aside and as promised, the build was pretty easy and I loved the clamping method. Trimming was simple too. Wicking was one of the least fiddly out there and is forgiving on the leg length, but if you trim to the base diameter or a touch longer then you can’t go wrong, saturating the cotton first then gently tuck the legs into the channels and it’s good to go.

Well this should be quick! Don’t expect a complex and innovative menu as it is pretty basic. That said, it has all I need from a single coil MTL tank:

I rarely bother using variable voltage but I use bypass a lot so I am glad that was included, though it does feel odd that temperature control wasn’t as they bundled SS316L SS coils. It is no biggie as there’s little benefit in TC for MTL vaping.

The screen is freakin' tiny! It is one of the smallest screens on a mod I have seen, it would look more at home on a pod system. To make matters worse, Digiflavor decided to make the top line white with black digits. With my older eyes, I have no chance of reading it with reading glasses, but who cares once you’ve set it up, as long as I can see the wattage easily (which I can).

By now you should be aware that there’s going to be nothing remarkable with the Z1’s performance so it’s down to how good the Siren 3 RTA performs, and I’m happy to report it does the job nicely. In fact it performs bloody great and I was getting superb flavour and a tight smooth draw from it.

The airflow is just right and I really like the way you can dial it either way until it hits the stops for the smallest MTL up to the largest for RDL.

This is especially handy on a SBS mod as you can intuitively dial without looking and since the smallest hole is my preferred cheek pulling MTL draw, I am really happy with this.

Battery life is pretty good and easily lasts over a day. I did test the on-board charging which is proper 2 Amp fast charging via USB-C, it was only a half charge but took around 30 minutes to top it up. The charging port is on the base though which I know some folks won’t like, I tend to lay my mods down on their side anyway when charging (less chance for cat-attack knocking over).

Size wise, it is pretty much the same as the Aspire MIXX and a bit bigger than the Kizoku Techmod. Comfort wise, the Z1 is somewhere in-between. 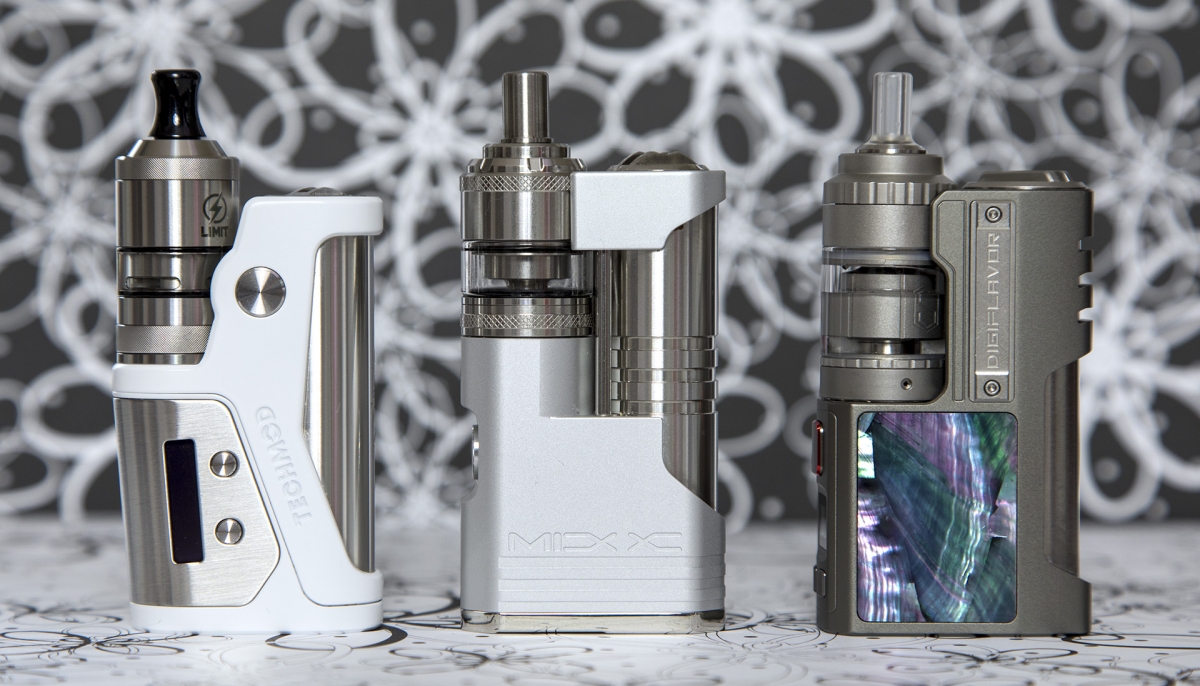 There’s no getting away from the fact that the Digiflavor Z1 is a pretty basic kit, but when it looks as good as this and vapes as well as it looks, then the lack of features becomes irrelevant for me personally. It’s exactly how I like my MTL kits to be. Looks over substance would be a bit of a harsh description due to its MTL performance, to be fair I couldn’t think of anything I would want different with this kit, apart from the drip tip of course, but someone might like it?

All in all for the price I think it is a bargain, and Digiflavor should be proud of this cracking bit of kit, but separate them and you’re going to have a tough time trying to match a tank or mod on the silver grey version. Fortunately I cannot see any reason why you would want to separate them. 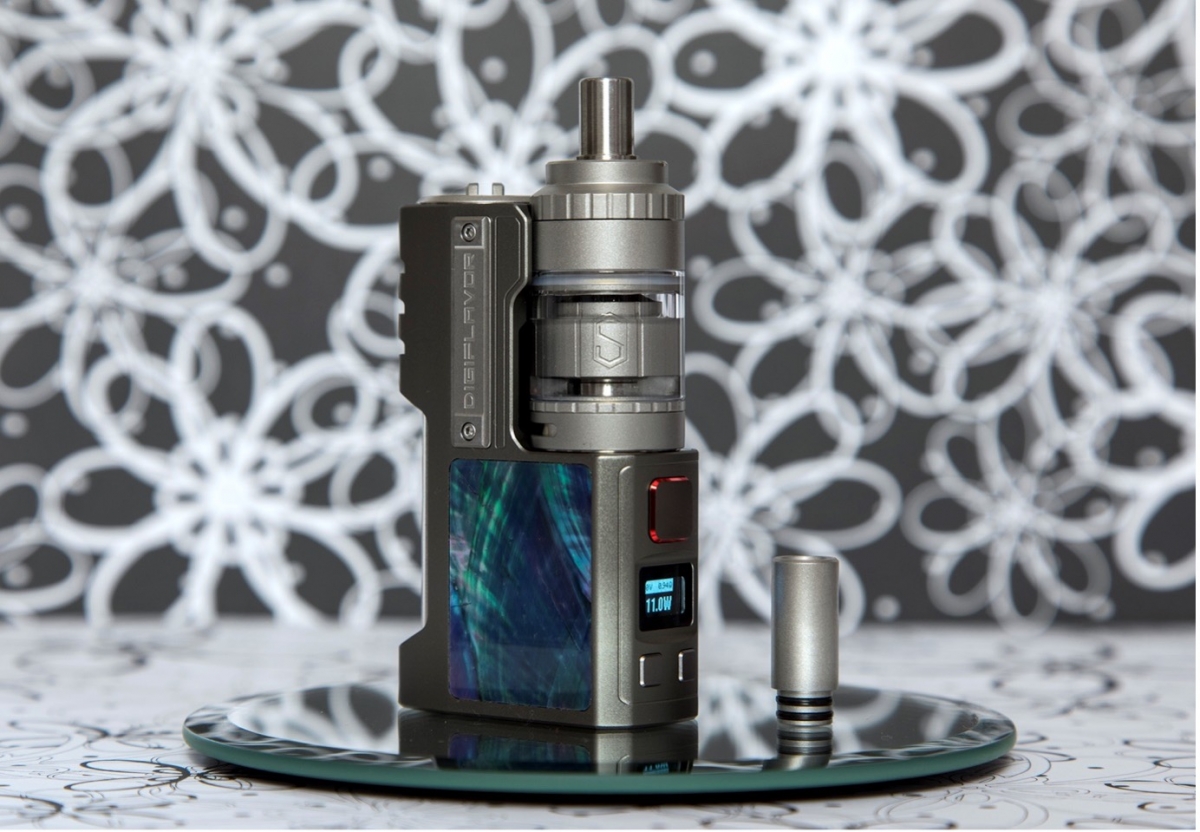 I’m all for innovation and evolution in vaping, but sometimes something like the Digiflavor Z1 kit comes along which is something you just want for the looks of it. This is the case for me, I simply LOVE this kit and happily it more than meets my fussy MTL expectations, there’s no deal breaking cons and the drip tip was soon rectified by popping a more suitable one on.

Overall Score: 9/10
(I know the maths doesn't add up but the overall like factor does)

A huge thanks to Sourcemore for supplying the Z1 kit for review, it has been a pleasure!

Keep an eye out for more reviews here:
https://www.planetofthevapes.co.uk/reviews