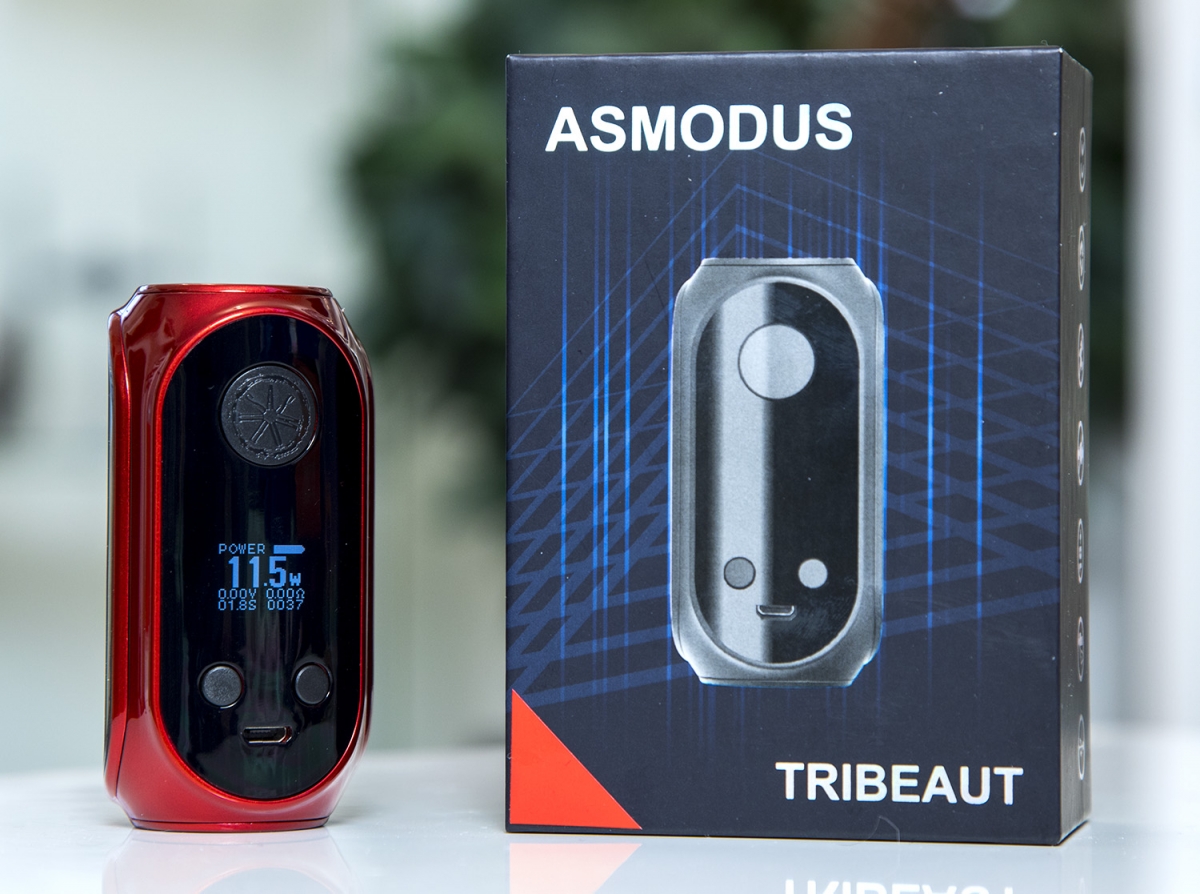 The Tribeaut TC Box Mod is an upgrade from the popular Minikin series, powered by a single 18650 battery (not included) with 80-H chipset which has a maximum 80 Watts power output.

The box is pretty much as you would expect from a mod only, a generic picture on the front with the colour depicted by a triangular sticker on the corner. The main writing is a kind of holographic print which looks great (colour changing as you rotate it), and is on all sides. 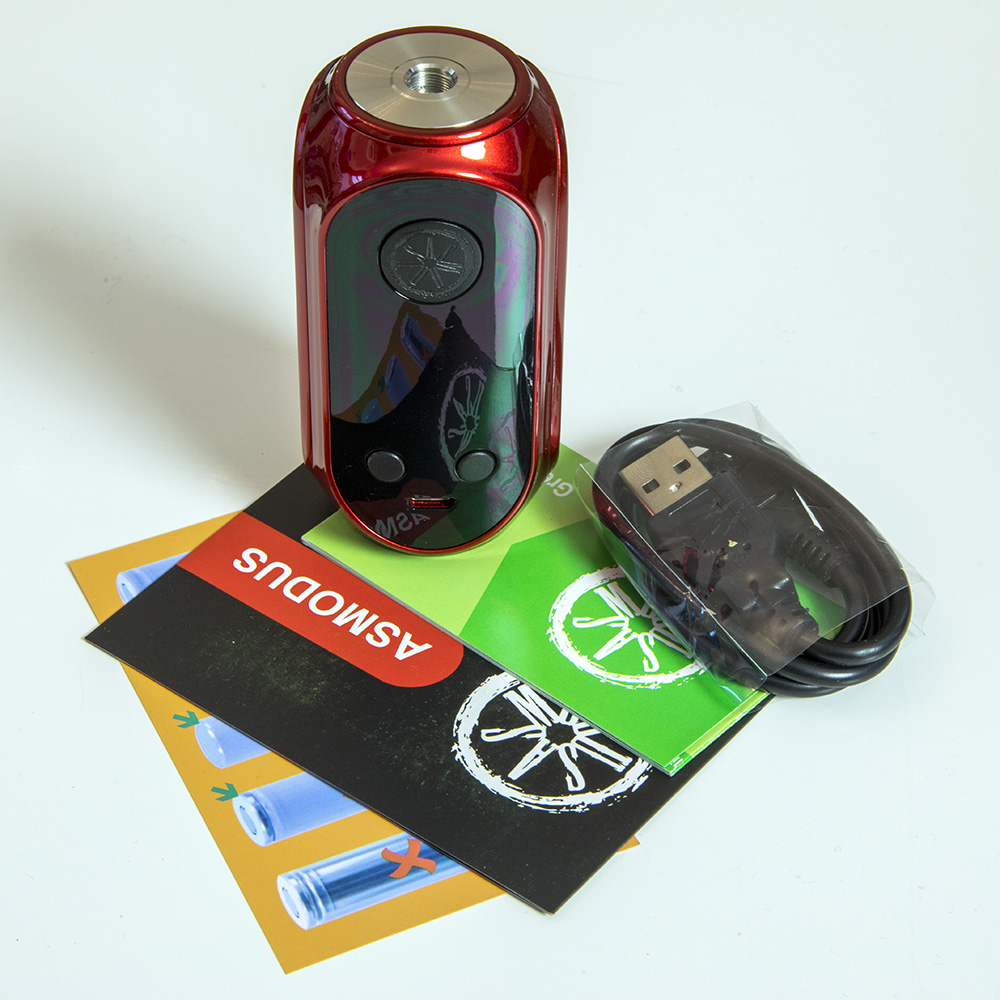 Nothing exciting inside the box, contents are supposed to include:

Mine came without a manual and, from research, it appears I am not the only one. Instead, there is a battery warning card, an asModus warranty card and ironically a ‘GREEN TIPS’ multi language booklet stating that “To protect the environment…. yadda yadda” Asmodus have gone paperless and the manual is online with a QR code to access it.

While I admire their intentions, I don’t think ‘online manuals’ are the answer. A simple recycled paper sheet would have been more environmentally friendly option than using electricity to access the manual on whichever device you need to use to access it.

No biggie, so on to the mods specs (also stated on the back of the box): 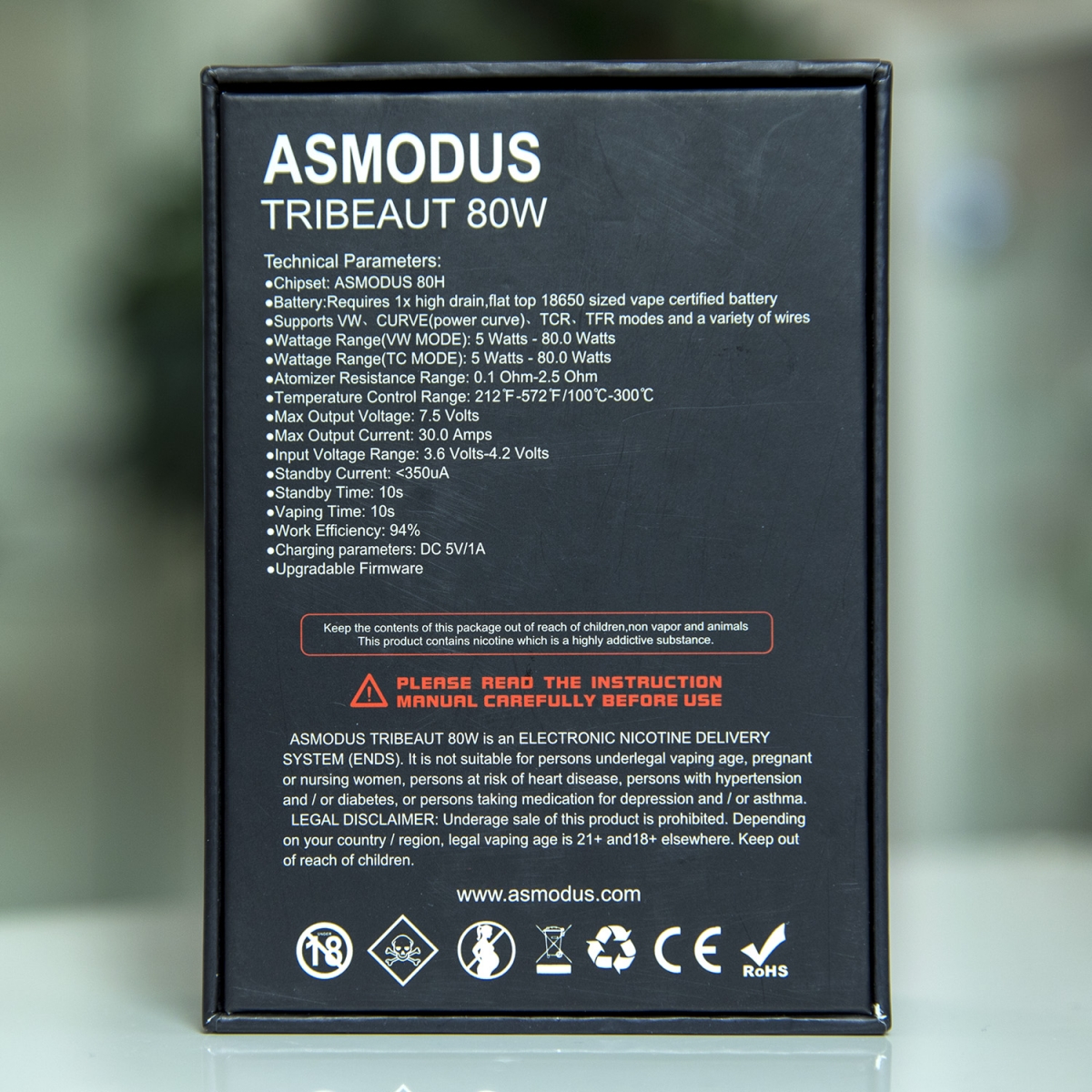 Sounds impressive, though more information than most users need. I’ve no idea what “Work Efficiency: 94%” means or how it relates to the usage of the mod, most of us just need to know the basics and that it works as intended.

It is firmware upgradeable which is a feature I will be keeping an eye on (more on that later), but here are its listed features:

So with all that out of the way, let’s take a look at the mod itself and its form factor (which is the main reason I wanted this mod). 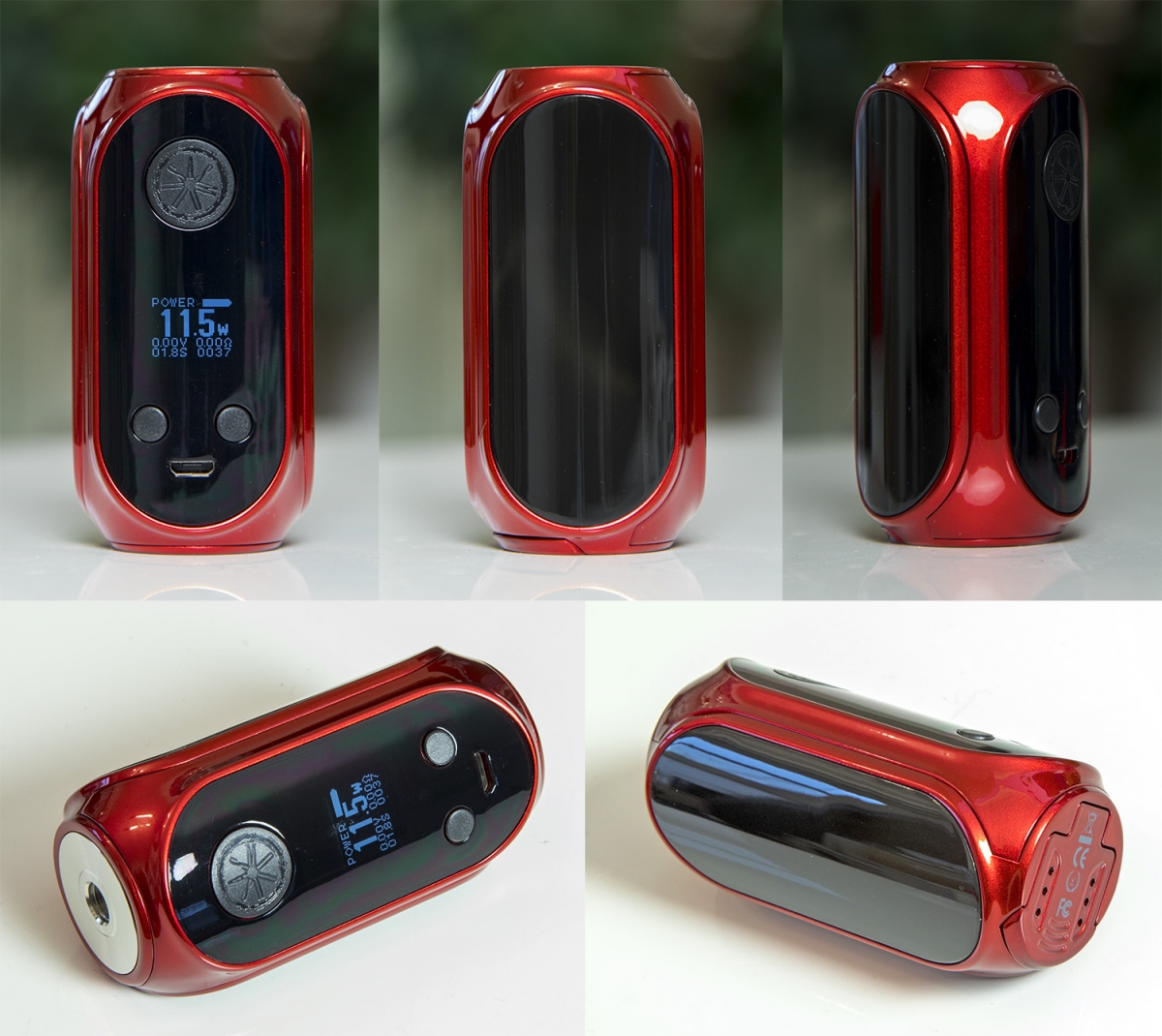 As you can see from the photo, it looks fantastic with its ‘Tri’ design, which is perfectly symmetrical and balanced. The 510 connection is spring loaded with a good sized 25mm platform which will take the obvious 25mm attys, and is raised so it should take up to 27mm, anything smaller does look a little lost on it though. The 22mm Wasp Nano RTA, for example, leaves an obvious surplus showing around the base. 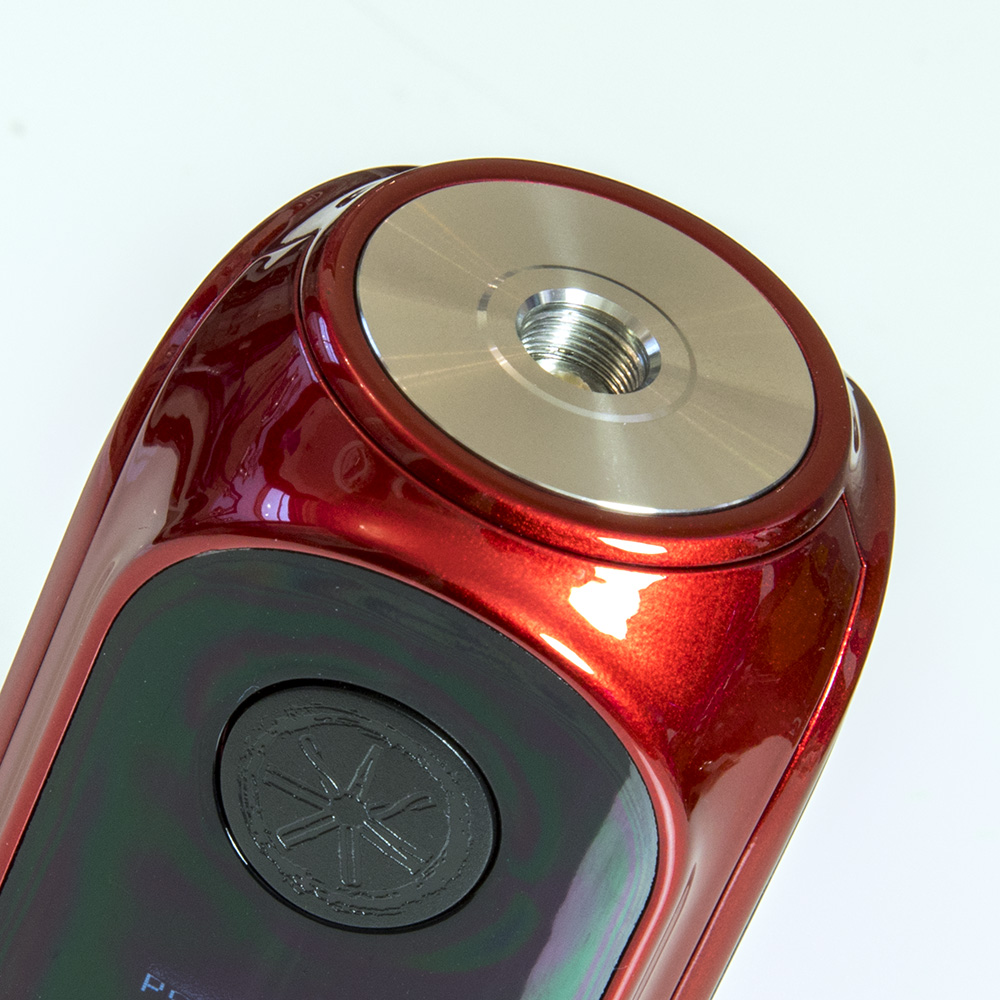 At the base is your battery door which is pretty solid with little rattle and feels really secure once a battery is fitted. The battery size is my first niggle though, when you look at the size and form of the mod, a 20700 battery could have been accommodated. In fact the design means they had to bloat it out and even a 21700 would have been possible for the sake of a few mm in height. 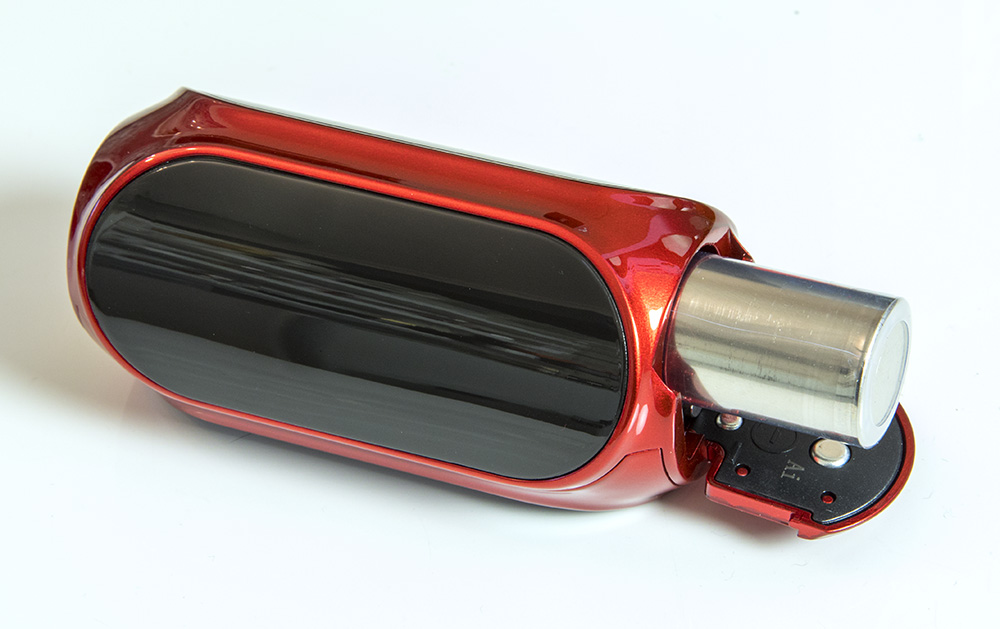 The display and control panel is at the front with polycarbonate side panels on the other two sides. The front and side panels are major fingerprint magnets, one of the worst I’ve seen including my chrome finish mods. I am forever wiping it clean to the point where I wish I had chosen the WHITE version as that hides fingerprints.

The display is very dim even at full brightness, and you have zero chance of seeing it outdoors in daylight. The fire button is nice and large with the asMODus logo embossed into it. The two adjustment buttons are near the base just above the Micro USB port and so looks like a delighted smiley face!

The feel of this mod in your hands immediately wins you over, the ergonomics mean this sits so comfortably and gives you multiple firing options, finger, thumb, palm etc. I found I could fire the mod easily however I held it without accidentally hitting the adjustment buttons, which is a big pro.

Size wise, 38mm x 81mm x 40mm isn’t as small as you would have expected from a ‘compact’ single 18650 mod, which isn’t a bad thing as such, but as mentioned earlier, you can tell it has been bloated out to achieve its form factor and again, I really wished they had gone the extra step and made it at least a 20700 battery mod. I am guessing it must have been designed from the inside out, so perhaps too late to consider a larger battery.

Here it is amongst a dual battery squonk Lostvape Drone BF and the compact three battery Uwell Valyrian mods to give you an idea of its scale:

Excuse the over the top height of the atty, but you can see how large the mod is and it shows how they could have gone with a 20700/21700 battery option.

**FIRMWARE UPDATE**
Since writing this review, a new firmware has been made available. I strongly advise you update this as it fixes a couple of my issues with the mod. Instructions and files can be found here:
https://www.asmodus.com/pages/downloads

I have revised my review to the latest version (Battery status error mainly).

I’m going to do a cop out here as describing the menu operations would be huge and sound overly complex, plus I will link to the GREEN TIPS operation manual to save you having to find it:
https://cdn.shopify.com/s/files/1/0008/7484/0129/files/TRIBEAUT_Specification_manual.pdf?876

Basic navigation is achieved (counterintuitively) by clicking the ‘FIRE’ button five times, navigate using the ‘FIRE’ button and the ‘UP/DOWN’ adjustments, and ‘FIRE’ button to navigate options, see the PDF file for proper instructions and the functions you can select. The menu can be frustrating at first but you soon get used to it after trial and error (I kept pressing the wrong buttons many a time).

But the good news is once you have it set how you want it, the operation is very easy. If you only intend to use this as a wattage only device like many users do, then the menu won’t bother you in the slightest.

The boot screen is a little annoying. Every time you power on the device, you are warned about poor battery safety conditions and have to agree you are using a safe battery. Not to say battery safety isn’t important, but you don’t need reminding every time you boot up.

asMODus have a good reputation for actual performance and the Tribeaut is no exception. TC mode performed exactly as expected and I enjoyed using it in this mode. You can adjust your temperature and wattage to find your perfect vape without any dry hits.

I’ve had a few mods which don’t appear to hit the stated wattage or struggle to achive higher power levels, but again asMODus have got it spot on. There’s no preheat option, but it doesn’t need it as it ramps up very fast. With all its niggles, it really won me over on performance. I tried several tanks on it, RTAs and stock coil tanks like the Smok TFV* Baby V2 with S-series coils, and I simply loved it. 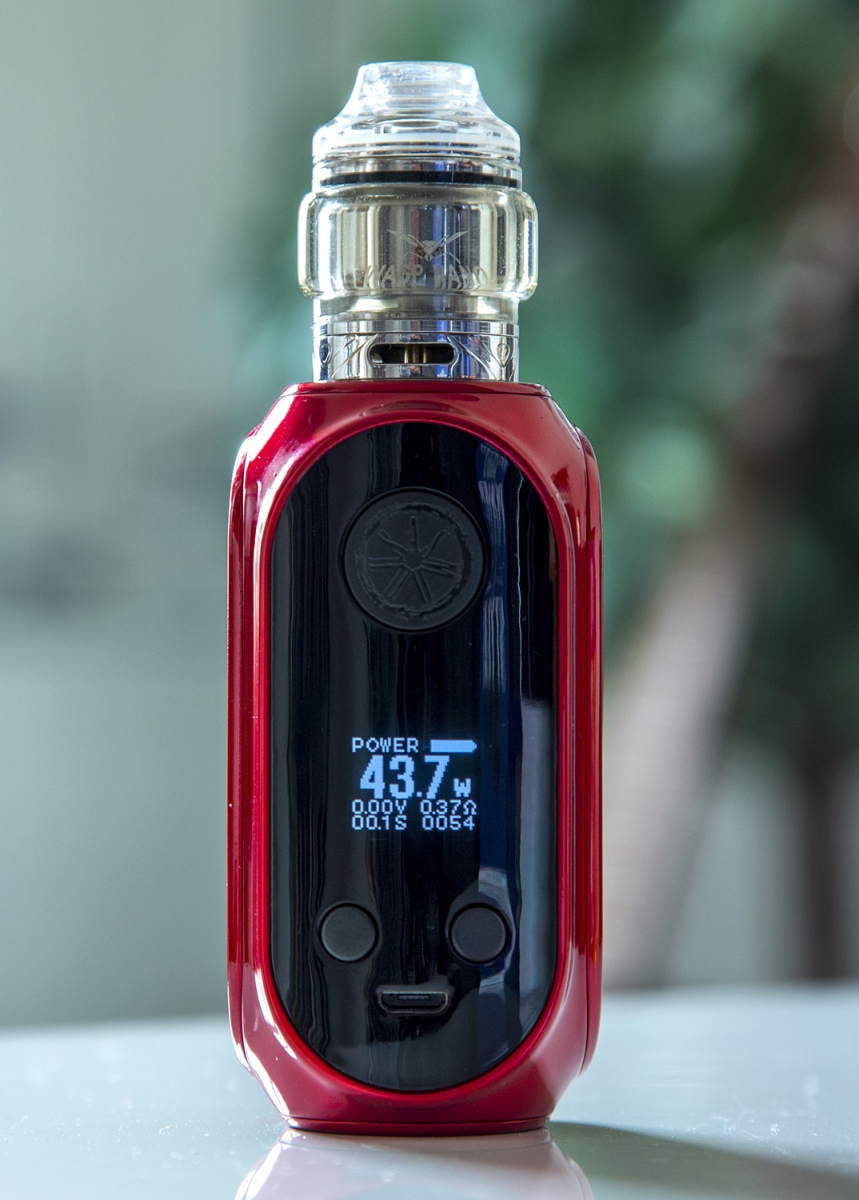 To sum up the Tribeaut is tricky. I wasn’t initially impressed and the niggles persisted to irritate me, especially having to go online for the manual (going paperless benefits the manufacturers carbon footprint but increases the end users). The fingerprint magnet is indeed one of the worst I have come across, but on the plus side, it is brilliant if you want to degrease your hands!

There were a few other niggles such as battery size, but it’s when I started to regularly use the mod I began to forget all that. The board is very efficient and delivers perfectly, and it’s just a superb looking mod that is very ergonomic. I have found myself using it in wattage mode only and it handles most tanks I throw on it up to about 60 watts (full wattage delivers but at the price of battery life).

I have also used it for MTL tanks as the battery last a ridiculous amount of time (three days, give or take).

If you like the look of this device and can live with its shortfalls, then you will be rewarded with a cracking little(ish) mod that simply delivers. The longer I have used, it the more I like it. 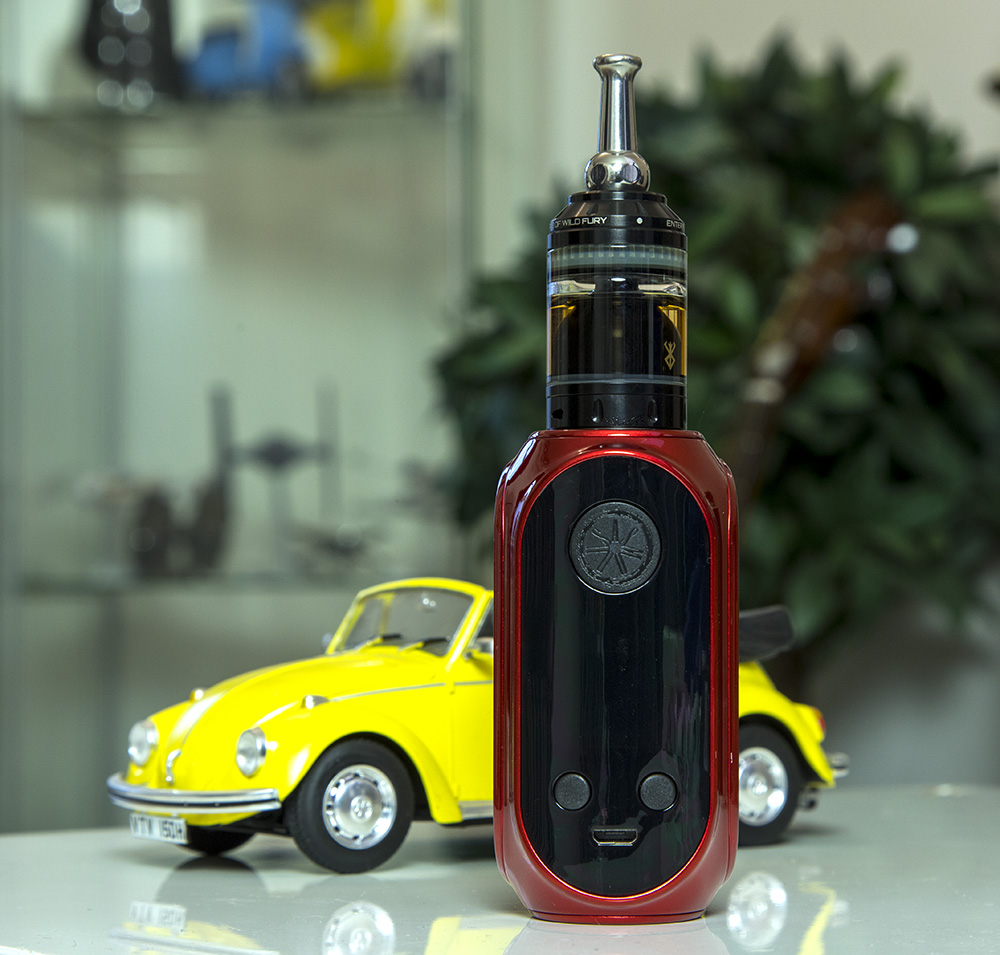 It’s a mixed bag that won’t appeal to everyone, but despite its flaws, it soon won me over and is one I end up using a lot, which says something as I have far too many great mods to choose from. I’m 50/50 if I would replace it if I broke it and would not put it as a ‘must have’ mod, but it will come down to your personal preferences. If after reading this review you still want to buy one, then I don’t think you will be disappointed.

Overall Score – 6.5/10 (would have been an 8 with larger battery capacity)

*My overall score is not an average of the breakdown scores but rather the whole bundle.

Thanks to Heaven Gifts for supplying this for review
https://www.heavengifts.com/product/Asmodus-Tribeaut-80W-Mod.html 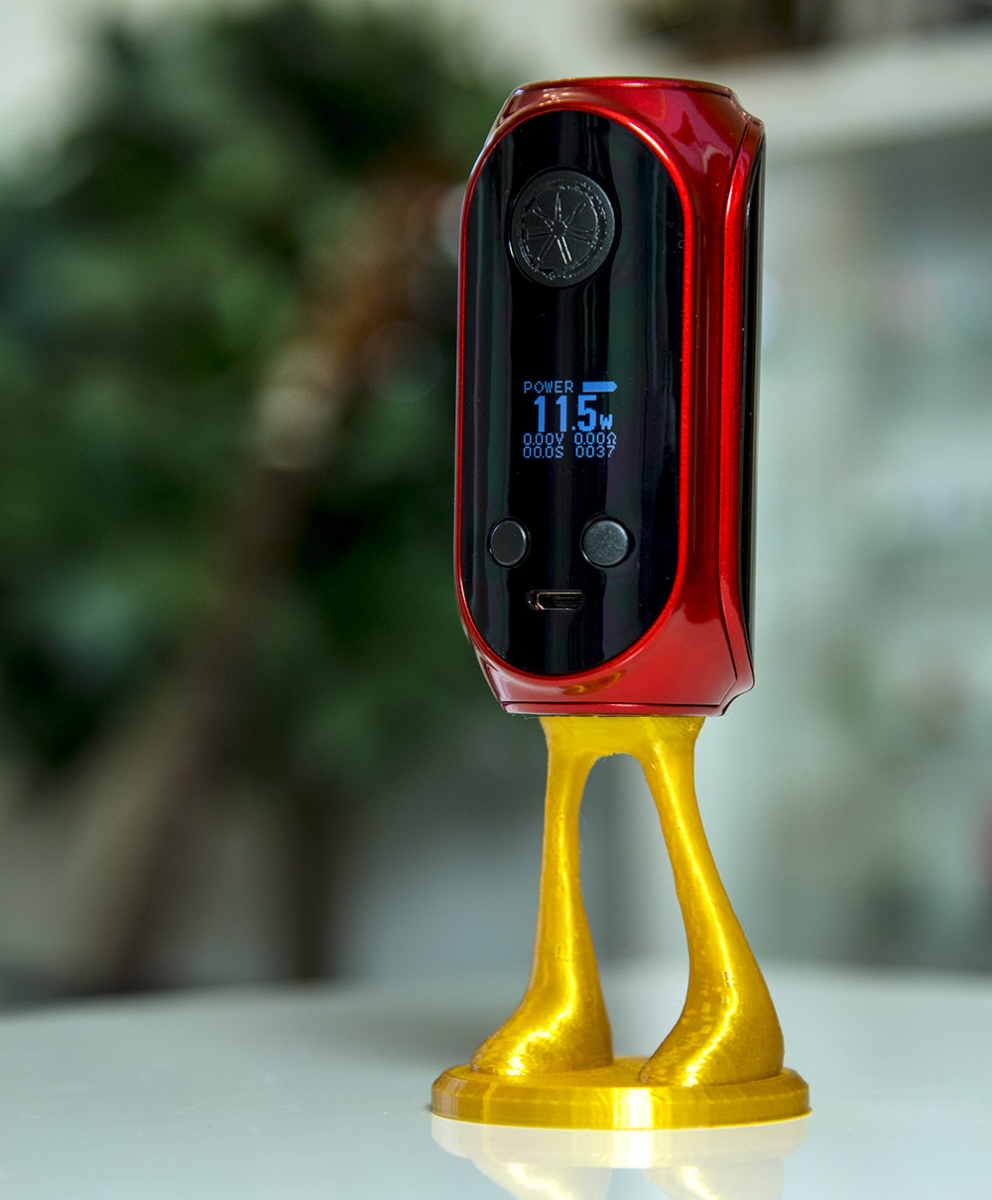