Templar Vapes E-Liquid is a newly released line from Vape Store UK, featuring four different flavours with exotic and mysterious blends, with a max VG ratio. The aim of Templar Vapes is to provide a journey for your tastebuds, and a taste experience unlike anything you have experienced before. The max VG ratio is intended for sub ohm tanks and rebuildable dripping atomisers, and nicotine strengths are available in 3mg and 6mg, with the juices available in 30ml glass bottles.

Ark of the Covenant 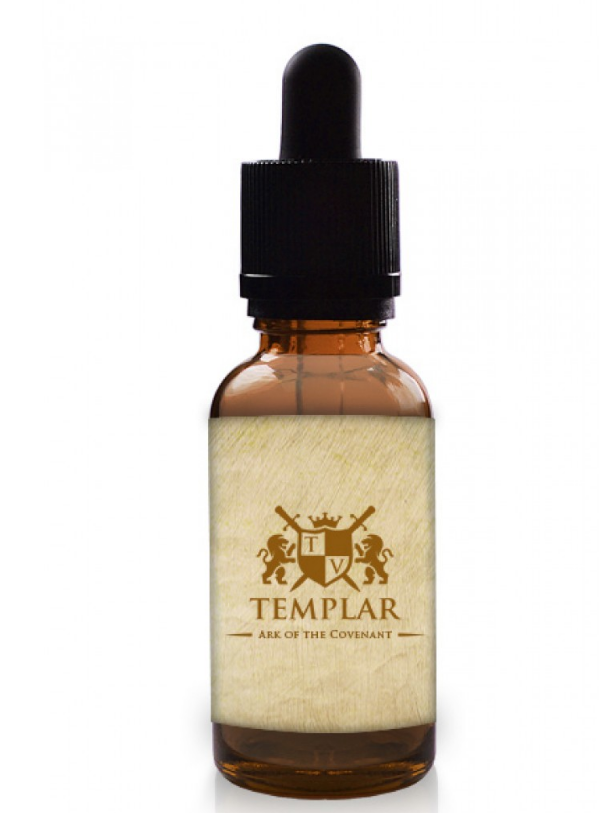 Legend has it that The Ark of the Covenant, also known as the Ark of the Testimony, was a wooden chest clad with gold containing the two stone tablets of the Ten Commandments as well as, according to various texts within the Hebrew Bible, Aaron's rod and a pot of manna. We think that it actually contained the recipe for this outstanding eliquid. With a mix of ten fruits the Ark of the Covenant eLiquid has been batch steeped for no less that a thousand years and will take your tastebuds on a magical pilgrimage due to delivering various flavours at different vaping temperatures.

If you are looking for a complex and fruity juice, Ark of the Covenant is a delicious choice. There are so many different fruits in here, it seems like a different one takes precedence each and every time you vape this. I pick up on citrus, berries, hints of apple, strawberry, and if you enjoy using mesh then Ark of the Covenant is one that really shines on a mesh wick.

Ark of the Covenant is one that absolutely has many layers, with different wattage levels unlocking different blends, and it seems to give many different flavour combinations depending on what power and build is being used. There is plenty here to keep your tastebuds guessing, and a juice that definitely rewards you for exploring the bounty it has on offer! 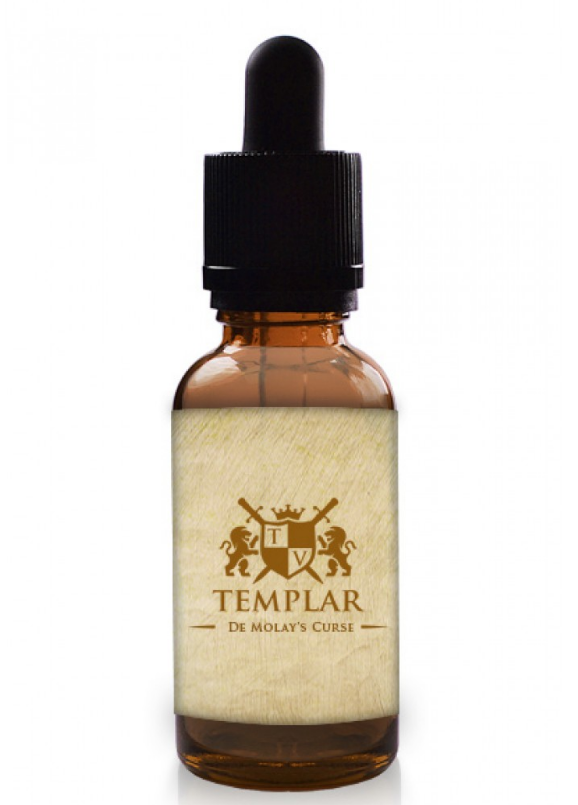 Legend has it that Jacques de Molay, also spelt Molai, was the 23rd and last Grand Master of the Knights Templar, leading the Order from 20 April 1292 until it was dissolved by order of Pope Clement V in 1307. Though little is known of his actual life and deeds except for his last years as Grand Master, when he was burnt at the stake while cursing King Philip IV of France and his descendants from his execution pyre. However, the story of the shouted curse appears to be a combination of words by a different Templar, and those of Molay. An eyewitness to the execution stated that Molay had shown no sign of fear and had told those present that God would avenge their deaths and create an eliquid with the power to wipe out evil from the face of the earth. By using this eliquid you will help to create world peace in the name of Jacques de Molay.

De Molay’s Curse for me gave a rich, dry inhale that seemed to me to feature a roasted peanut and hazelnut taste, with the nuts combining to provide a decent amount of throat hit. In the background I pick up a light cream and heavy pie crust as well, that becomes a lot more prominent on the exhale. I found De Molay’s Curse to work really well at high wattage, the pie crust and creamy undertones came to the fore even more and presented a more well rounded dessert vape. 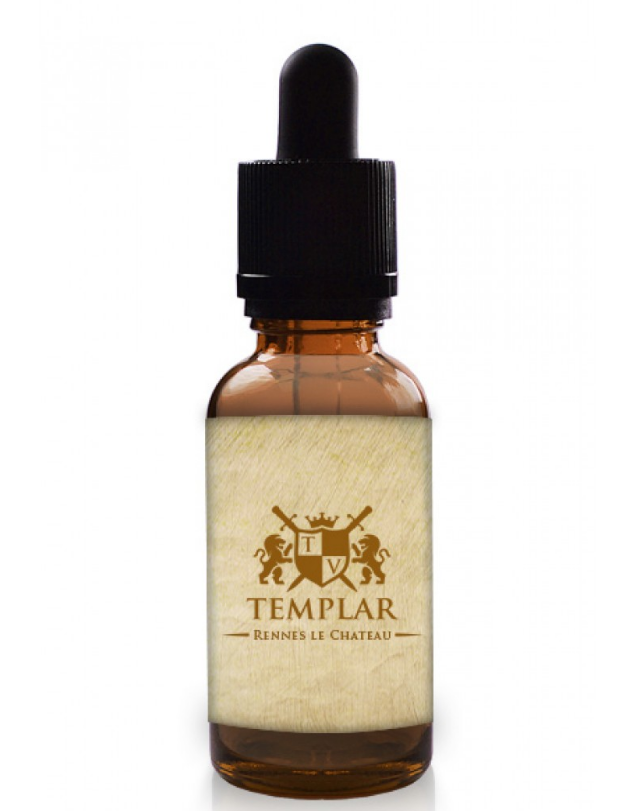 The entire area around Rennes-le-Château became the focus of sensational claims during the 1950s and 1960s involving Blanche of Castile, the Merovingians, the Knights Templar, the Cathars, the treasures of the Temple of Solomon that was the booty of the Visigoths that included the Ark of the Covenant and the Menorah (the seven-branched candlestick from the Temple of Jerusalem). From the 1970s onwards claims have extended to the Priory of Sion, the Rex Deus, the Holy Grail, ley lines, sacred geometry alignments, the remains of Jesus Christ, alleged references to Mary Magdalene settling in the south of France, and even flying saucers. Well-known sources are now claiming that this is the area that the mystery fruits are grown, flavours extracted and then blended together for use in the wonderful eLiquid that is Rennes Le Château.

Rennes le Chateau is a very well done, tropical fruit mixture that will appeal to the fruit lovers out there. It’s very sweet as well, which can become a little overpoweringly when vaping this liquid heavily, but overall I find it a pleasant summer vape in short bursts, featuring a blend of citrus, a hint of mango and nice sweet and juicy pineapple too! 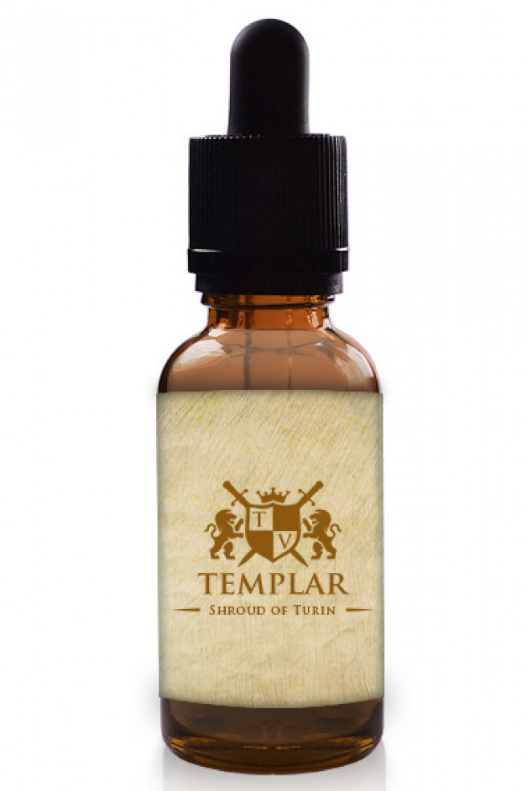 The Shroud of Turin or Turin Shroud is a length of linen cloth bearing the image of a man and is believed by some Christians to be the burial shroud of Jesus of Nazareth. Three radiocarbon dating tests in 1988 have falsely concluded that the age of the cloth only goes back to the Middle Ages but experts have now discovered that if you look closely you can see that man on the cloth, has in his hand, a bottle of this eliquid. If it's good enough for Jesus then it’s good enough for us. The shroud is kept in the royal chapel of the Cathedral of Saint John the Baptist in Turin, northern Italy along with the secret recipe and mixing station of this custard pie eliquid.

Shroud of Turin has a thick and tasty vanilla custard inhale, that combines a tasty pie crust and a cheeky hint of sweetness on the exhale that makes for a very tasty dessert treat. Shroud of Turin is another dessert liquid that like the real thing, is best served warm, high wattage fans will get on really well with this juice!

Templar Vapes is a good solid line of juices that offer something a little different, and keeps your tastebuds guessing. The max VG blend provides a great smooth background to the blends on offer here, which are complex and full of flavour, not one of these juices tasted weak or bland to me. The Templar Vapes range is a solid, decent range well worth a look, with a nice balance of tasty fruit juices and sumptuous desserts on offer.  These juices were sent in to us by VapeStore UK to review - they are currently on sale at £10 for 30ml - you can check them out here http://www.vapestoreuk.co.uk/e-liquids/templar-vapes-e-liquid-by-vape-store-uk/.