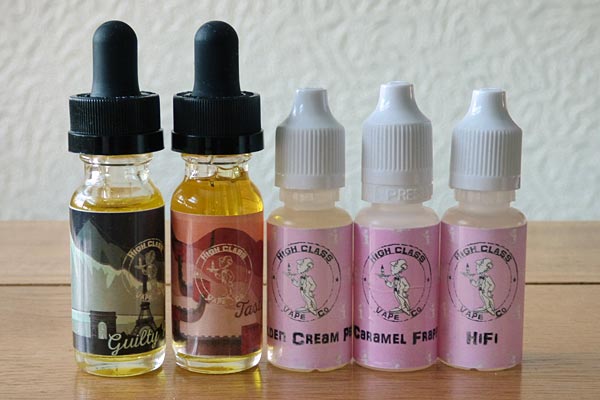 High Class Vape Company are an American E-Liquid manufacturer based in San Diego, California. All High Class E-Liquids are made in a lab and are 100% Diketone free and do not contain Diacetyl, Acetoin, and/or Acetyl Propionyl.

Their juice is offered in two separate ranges: the High Class Budget Line and the High Class Premium Line. Regardless of whichever range you choose all High Class E-Liquids are mixed to a ratio of 70VG/30PG and both ranges are available in a variety of strengths: 12mg, 6mg, 3mg and 0mg.

We received the Budget Line juice in 15ml PET bottles which featured child proof caps. The labels are neat but perhaps a little bit basic (not that is matters much if the juice is nice) but they do at least have the strength and warnings clearly marked. The Premium Line bottles that we received were samples and had a 15ml capacity as opposed to the retail versions which are sold in 60ml bottles. The bottles are made of glass and feature child proof dropper caps. They also have much nicer labels and are fairly colourful, once again the strength and warnings were clear to see.

In total we received five different bottles of juice, three from the budget range and two from the premium range. I tried out all of the juice in temperature control mode on my Asmodus Minikin V2 using a Achilles II RDA which is currently fitted with a 0.5ohm 316 Stainless Steel coil. 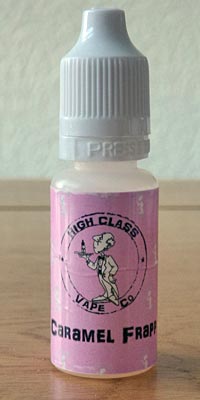 Ice-swirled cappuccino meets hot melted caramel, and settles into a cool vanilla whipped cream. Spectacular blend of hot and cold and ups and downs, converge into a fantastic Caramel Frapp.

To be honest I wasn’t really expecting much from this juice since it is marketed as a budget E-Liquid but it really did surprise me. I vaped it anticipating the taste of cheap vending machine coffee but it was actually way better than that and really quite convincing. For discerning coffee drinkers you won’t find it rocks your world or anything but it is decent enough and really does taste like real coffee. In addition the coffee is really nicely balanced with an enjoyable caramel flavour and hints of whipped cream. I did find that the cream was mainly in the background and I didn’t always notice it but it did certainly add a subtle sweetness to the mix. Since the coffee and caramel combination was seriously good I was certainly happy enough with what this juice offered and funnily enough I did end up vaping the bottle rather quickly.

Vapour production was very good but quite typical of the mix ratio used. I found the throat hit to be mild to medium in 3mg strength. 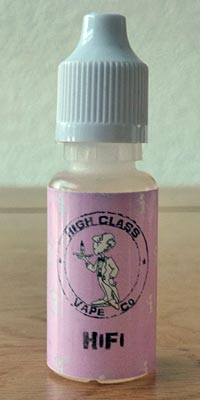 HiFi is an organic and fresh earthy taste. It has a nice crispy cucumber that collides with the mild vegetable and plant taste of the delicious hibiscus. We added upon that with a sweet honeysuckle, and even a ripe, plump fig.

Once upon a time there used to be a vape store near me that sold a lovely hibiscus E-Liquid but I am sorry to say that they decided their rent was too expensive and they subsequently closed down. Thankfully this one from High Class is as good and arguably better and it is certainly the hibiscus that you prominently notice on your first inhale. The cucumber which sounds like an odd ingredient to add exists as an occasional background note and surprisingly it adds a nice freshness to the mix. There is also a small amount of sweetness which comes from the honeysuckle but it is subtle and nicely balanced. At no point could I actually pick out a fig flavour but I am sure it is definitely there no doubt serving to add further interest to the overall flavour.

I found that I really enjoyed this juice because it is very light, has an interesting flavour combination and it is rather refreshing. Considering this is marketed as budget juice I would say it is without a doubt on par with most typical priced mainstream E-Liquid. You do get plenty of cloud production with this E-Liquid and I found the throat hit to be very mild in 3mg strength which means you can happily vape it all day long! 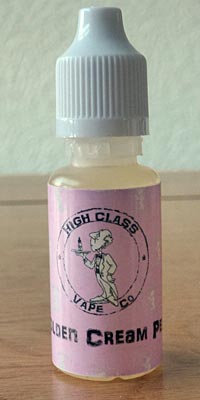 Enjoy a perfect pear-adise with Golden Cream Pear. We took the succulent pear, doused it with caramel, adorned it with fluffy whipped cream, and drizzled on-top... a green apple glaze!

The first flavour that greets you on the inhale is a fresh and slightly sweet pear that is balanced extremely well with a tasty rich caramel. These flavours are made all the more enjoyable due to the inclusion of a delicious whipped cream. To round off this excellent combination you get an ever so slight hint of apple that is noticeable as you exhale.

I was very impressed by this particular juice and I really liked the way I could easily pick out all of the individual ingredients. Just like the other flavours it is fairly high in VG so you do get a nice amount of cloud production and it makes for a very smooth vape. I found the throat hit to be mild in 3mg strength. 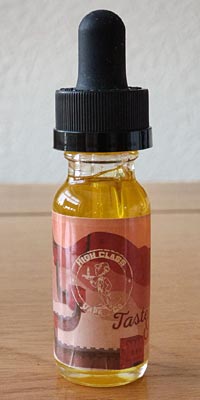 Taste of the Orient

Experience the blossoming culture of the Orient with tastes so crisp and refreshing as cucumber, sweet honeysuckle, and juicy green honeydew melon.

This particular juice makes for a very smooth and mellowing vape. The main flavour is a combination of honeysuckle and honeydew melon. Both of these ingredients tasted very natural and worked well in combination with each other. To create additional interest there is a slight hint of cucumber in the background but it only ever takes centre stage occasionally on the exhale but when it does the result is a sensation of refreshing crispiness that never overpowers the other ingredients.

While the ingredients are perhaps a little unusual I found this juice to be highly enjoyable and I really appreciated the fact that it was very different.  Since the juice is relatively mild in terms of its ingredients I personally don’t think you would find anything to dislike here and it would make a great all day vape when you don’t know what you are in the mood for!

Vapour production was very good albeit typical of the mix ratio. The throat hit was very mild in 3mg strength. 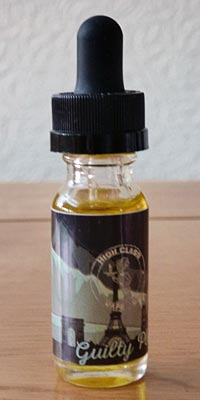 Feel the flavours tease your taste buds and enjoy your Guilty Pleasure of plump pears, honeysuckle, and other subtle fruit notes. A perfect taste to compliment an enchanted land such as Paris, and one good enough to take you back there every time.

With this particular juice you get a very pleasant pear flavour on the inhale which is sweet but not quite as sharp as the one in Golden Cream Pear E-Liquid. It does have a nice juiciness to it and it did almost see at times like there were two varieties of pear in the mix. It was certainly a bit difficult to tell for sure because the pear is balanced out and ever so slightly toned down by a sweet honeysuckle flavour. To be fair I didn’t really mind this at all and I actually liked the more prominent honeysuckle since it is something you don’t often come across in a lot of E-Liquids. In the background you can also pick out other fruity flavours once in a while but I couldn’t specifically tell you what they were, at a guess perhaps a subtle strawberry and the merest hint of apple.

As an overall flavour I found this to be an excellent vape that is different enough to most but still very appealing to vapers who enjoy fruity E-Liquids. Vapour production was very good and I found the throat hit to be mild to medium in 3mg strength.

Initially I didn’t expect a lot from some of these juices but in the end I was very impressed with the quality and variety of the flavours which I received for review. The three budget juices were extremely good and certainly do not have a cheap and nasty taste to them at all so do keep in mind that budget juice can sometimes surprise you. The premium flavours were also superb and while they certainly do have more complexity to them as well as more refined balancing I never felt like they were leagues ahead of the budget range since both ranges were in my mind equally enjoyable!

In my opinion if you fancy trying any of these juices from either range I think you will be very happy with them. Many thanks to High Class Vape Company who sent these E-Liquids to Planet of the Vapes for us to review.