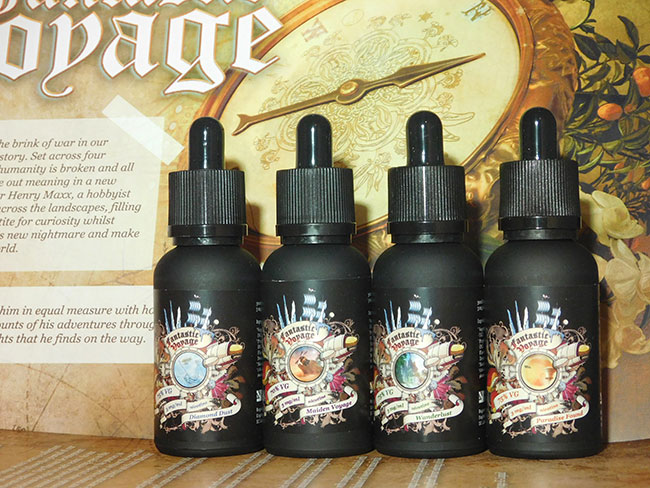 Fantastic Voyage is a new high VG eliquid range created around a post-apocalyptic story with a central character of Henry Maxx as the theme behind the juices, which is present on the promotional literature I had included with the range for review. Fantastic Voyage is produced in the UK by Taylormade and bottled by Liberty Flights, available in 10ml bottles and in 30ml glass dropper bottles and nicotine strengths are available in 3mg as well as 6mg.

Four different juices make up the Fantastic Voyage range, Maiden Voyage which features a 70% VG base as well as Paradise Found, Diamond Dust and Wanderlust which all feature 75% VG bases. Each Fantastic Voyage juice I received for review came nicely packaged in a cardboard presentation tube, featuring the bottles inside, with 10,000 Leagues Under the Sea inspired artwork on it. The 30ml bottles were childproof and featured all relevant safety and warning information clearly presented on the labels. 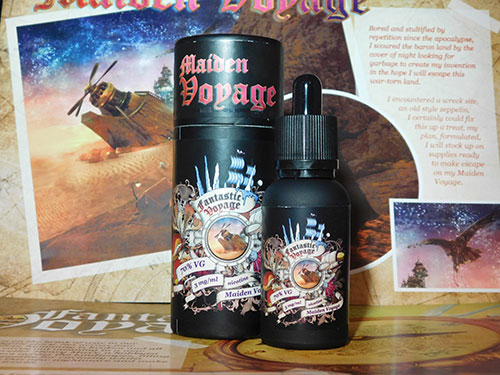 A moorish sweet apple layered with crumble, topped off with creamy custard and a dash of cinnamon...

Upon opening the bottle of Maiden Voyage I was greeted with a very inviting smell of sweet green apples, pleasant indeed! The inhale features a strong taste of fresh green apple, with a rich crumble texture in the background, and a light and creamy custard on the exhale that is finished off with a hint of cinnamon at the end. A pleasant and smooth vape, that reminds me of warm apple crumble dunked in custard! 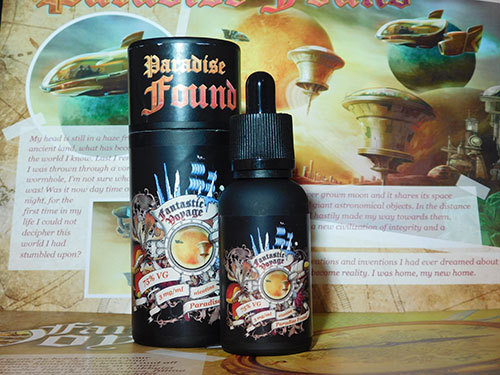 A juicy ripe peach that cuts through a creamy Greek yoghurt with a touch of vanilla...

Paradise Found smelt really strongly of artificial peaches, which wasn’t the most pleasing smell when opening the bottle. There’s a strong tinned peach flavour throughout the vape, which was counterbalanced with a smooth Greek yoghurt exhale, which I think dominates the vanilla as I wasn’t picking up on a lot of vanilla in this juice. It’s very similar to a supermarket peach yoghurt flavour, a smooth and easy going vape that definitely isn’t short on flavour. 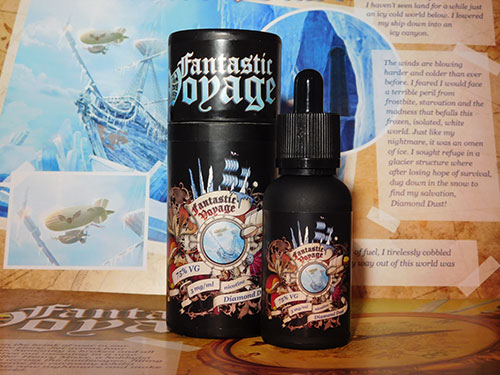 There’s a whiff of peppermint when opening the bottle of Diamond Dust, with a slightly off-putting artificial scent too. Unfortunately the chocolate followed the same trend, there was a quite dominant taste of artificial chocolate with a slightly minty exhale throughout, which I unfortunately didn’t get on all that well with, and there was a bit of a harsh throat hit present, whereas with the other three juices in the range I wasn’t getting any throat hit at all. The mint exhale is spot on here, unfortunately the chocolate isn’t I’m afraid. Diamond Dust unfortunately wasn’t a juice that appealed to me. 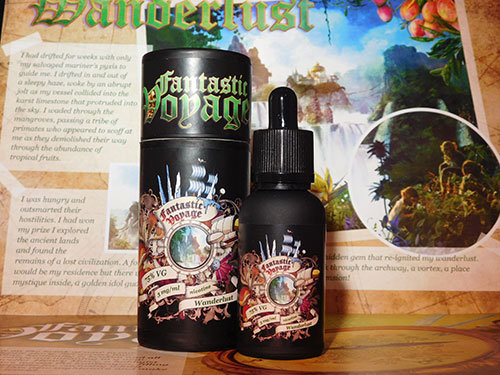 I got a nice and exotic mix of strawberry and guava when opening the bottle of Wanderlust, which I found very appealing. Fresh strawberry on the inhale was the first flavour I detected, with a note of guava in the background, and Wanderlust is finished off with a hint of delicious creamy vanilla custard. I really did think that these flavours blended very well together, I was a little apprehensive of guava and custard at first, and I found Wanderlust to be a delicious custard based vape offering something a little different to the multitude of custard blends out there!

Aside from Diamond Dust, which unfortunately didn’t appeal to my tastes, Fantastic Voyage offers some tasty juices, and Wanderlust in particular I really got on well with, I really feel that Wanderlust was a juice that I would happily re order again. The 75% VG base provides plenty of clouds, and after trying all of the juices in both a tank and an RDA I felt that an RDA with a sub ohm build really brings out the best from the range.  You can check out the Fantastic Voyage range on the Liberty Flights website here - https://www.liberty-flights.co.uk/Guest-E-liquids/Fantastic-Voyage-E-Liquid.